After our excursion around the Galapagos Islands, it was time to return to the mainland and to Ecuador‘s capital – Quito for a proper look round. We’d flown over it a few times already, and stayed in a few hotels en route to or from the airport but not investigated the place on the ground.

Maybe there are parts of the city that are well-designed, well-built built, with lots of greenery and leafiness and overall pleasantness; however, we only saw such a place once – the city’s central square. 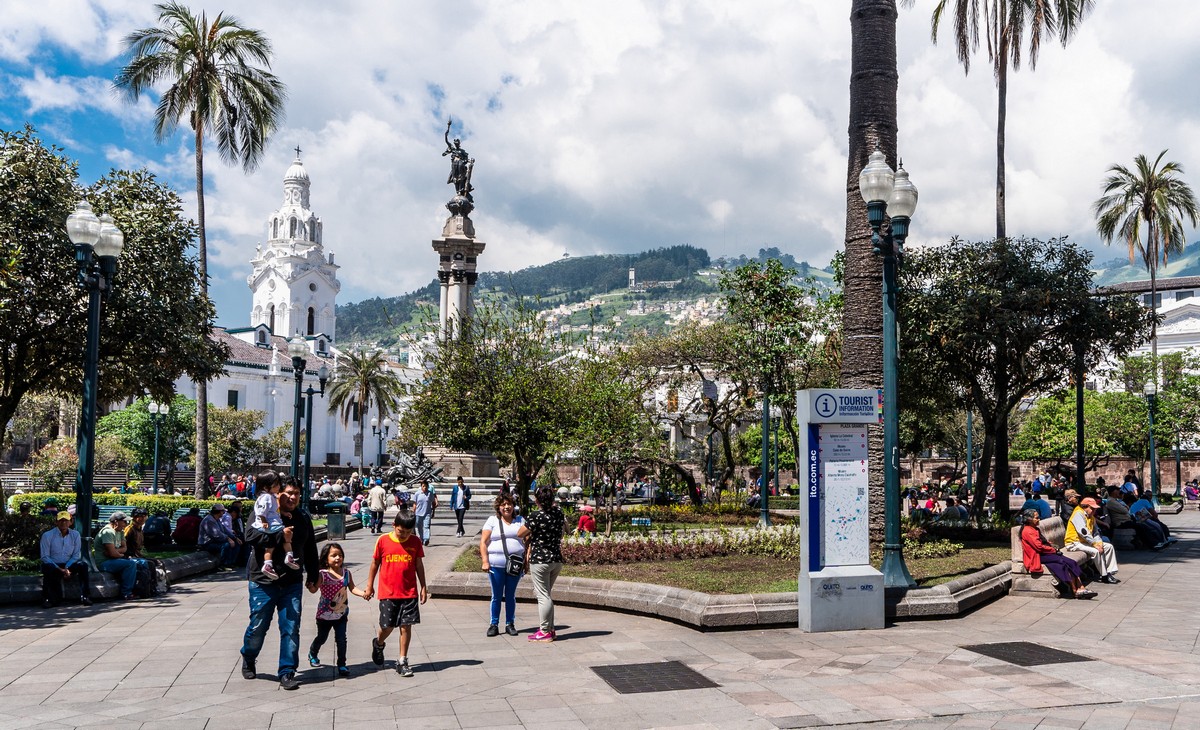 The rest of the city – at least those parts we saw – leave a lot to be desired. Untidy, ungroomed, seemingly no plan for town-planning ever, and traffic worse that Moscow’s – and that’s saying something. The old town looks much better and there are some neighborhoods that are interesting (for example, where our hotel was located), but even those – I’d hardly call them charming. Alas, the city is lagging behind other Latin American capitals I know of.

One aggravating factor the city’s huge population all crammed into one relatively small area. To compare, Quito covers nine times less area than Moscow, but its population is just 5.8 times less. But Moscow is a city of practically nothing but high-rise buildings; Quito rarely gets much above two floors across the whole city.

Here are some tourists lapping up Quito’s suburban sprawl. It’s not quite a favela, but it’s getting there. There are some places where the houses are better, but they still seem to be made of non-standard materials and hardly ever painted.

I have a simple rule when visiting a new city: the best way to get a proper feel for it is by taking a stroll through it. First decide on a route, then follow it. Here in Quito it went from the Virgin of Quito monument back to our hotel. Alas, I didn’t get a pic of said monument; you’ll have to make do with one I found on the internet: 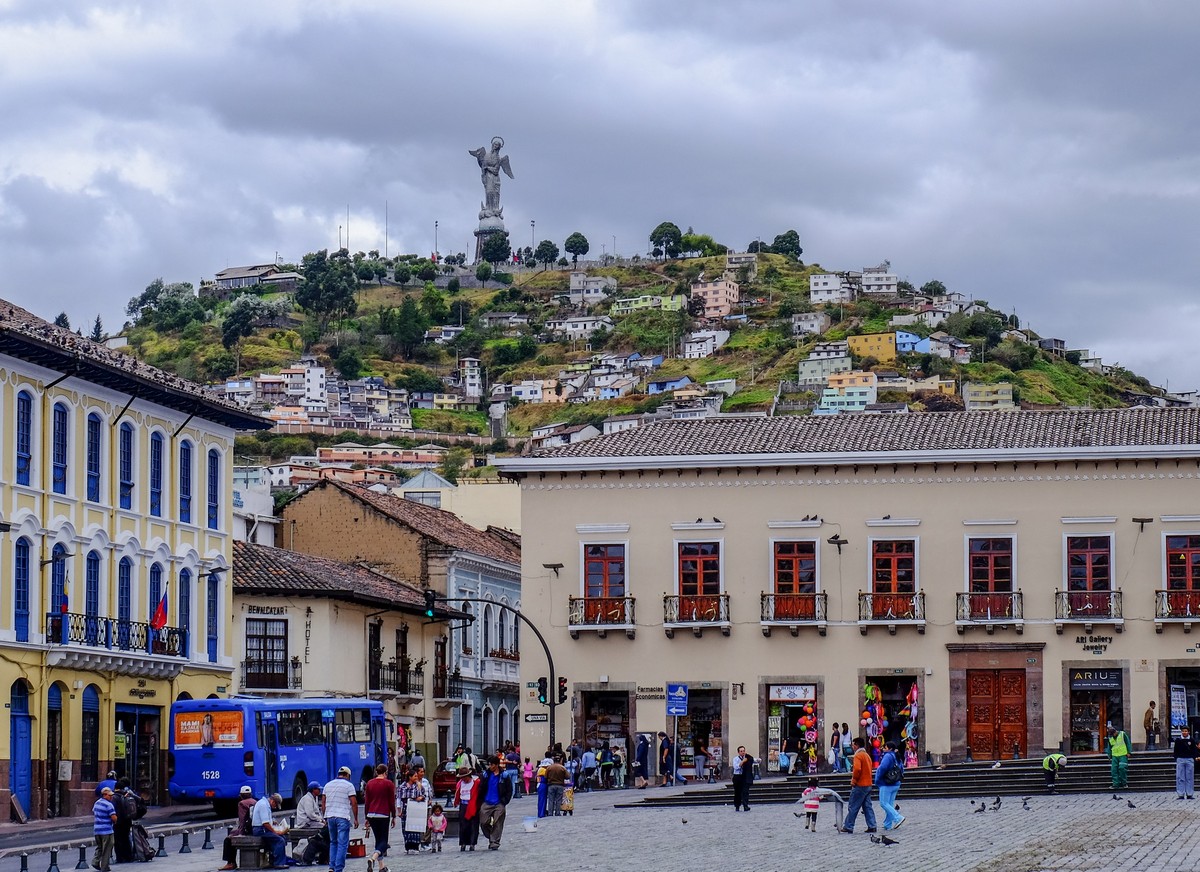 This walk of ours gave us a good example of how poorly organized the traffic is here: to get from the monument to our hotel on foot takes less than an hour going steadily (it’s around four kilometers). In a car, getting from our hotel to the monument took 40 minutes, and we covered twice as much distance – eight kilometers! Quito is one big traffic jam.

Anyway. Our taxi dropped us off at the monument. Impressively large. Interestingly – you can go inside it. Naturally, in we went…

The view from up top:

Back down again, we set off on our designated route… 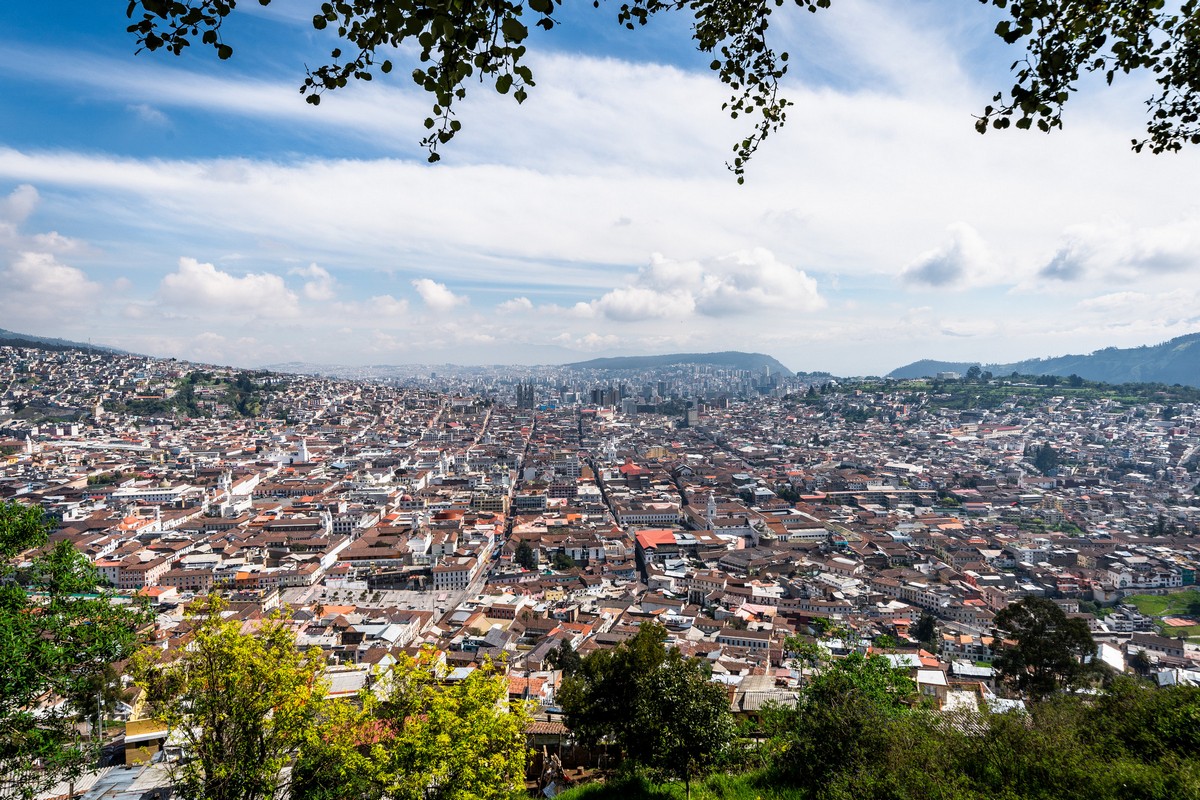 Almost immediately, we passed through a children’s play park; but there were no children – just lots of angry sounding stray dogs making a right din. Nice. Not.

A little further – this reassuring sign on a wall:

Next – another statue; we didn’t find out who it’s of. And more stray dogs. 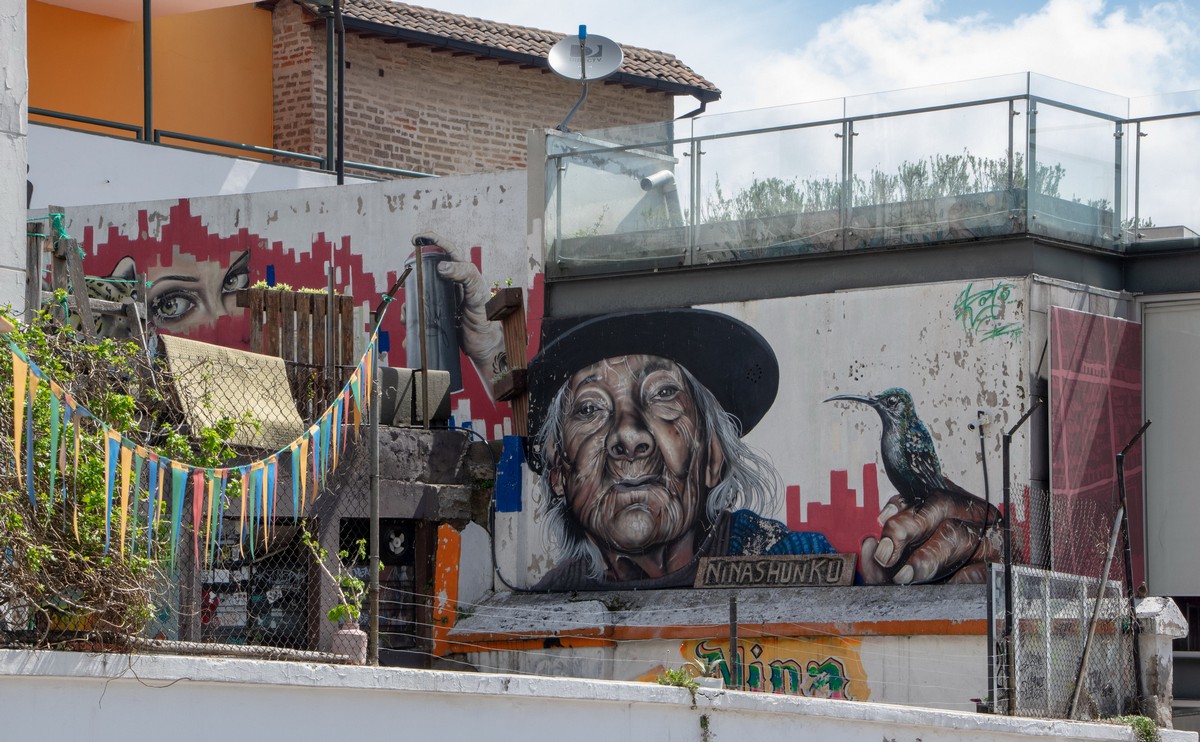 Fresh, sweet-smelling fruit. A purchase, a few nibbles, and onward…

The central square, the presidential residence, the seat of the government – Carondelet Palace, and more besides. Curiously, those semi-basement doors you can see in front of the palace are to little shops. But for some reason today they weren’t open; was it because it was Saturday? Incidentally, we were lucky it being Saturday: the roads in the center are closed to traffic and become pedestrian zones on the weekends. Aha – maybe that’s why it took so long in the car?…

Next – the city’s cathedral. We could have climbed up its tower, but after yesterday’s trek up a volcano, we passed.

The city’s parks are rather pretty overall, but if you look closer they turn out to be actually somewhat shabby: trash here and there, general unkemptness, and peeling paint. And there’s a conspicuously catastrophic lack of greenery here too.

Another monument. What it was we couldn’t guess, and didn’t fancy asking the street traders in front of it:

Cars, cars, and more cars. Apparently there are plans for a metro being built. And not a minute too soon… 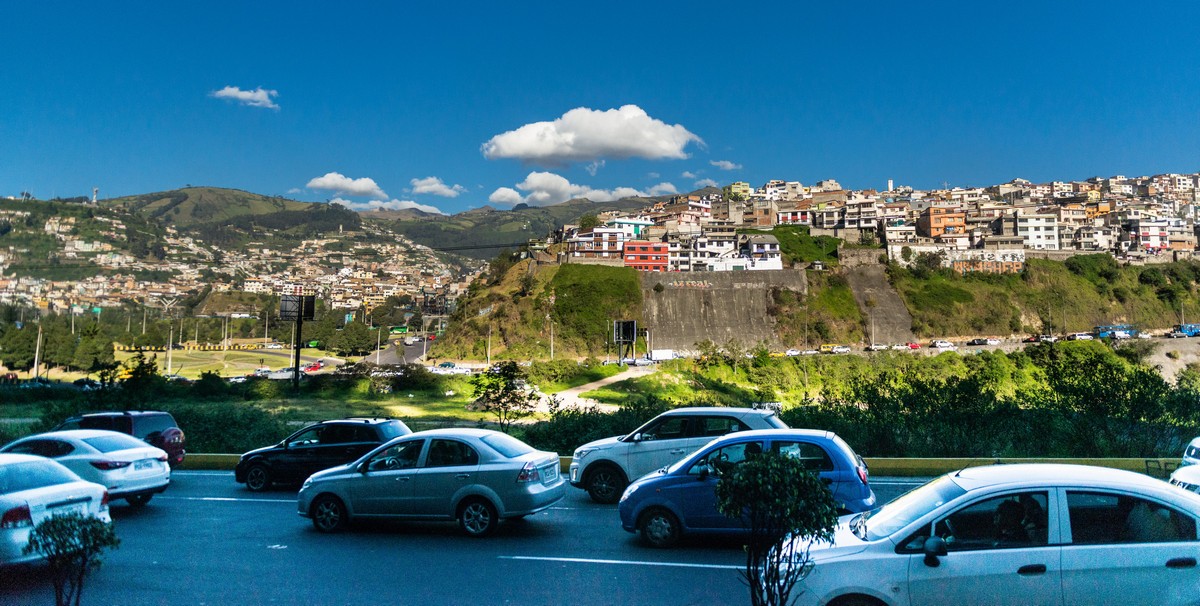 The only multi-story residential buildings we saw. Interesting design – following the contours of the landscape.

And that, I do believe finally brings my tales from the Ecuadorian-Galapagos side to a close. Hope you liked them – and now want to get there yourselves. For Ecuadorian-Galapagos scenery is glorious, the wild beasts – adorable, and small towns – charming. So don’t let this not-too-positive ‘review’ of the country’s capital put you off.

But it wouldn’t be right to finish on a negative note. Therefore, herewith, the ‘Best Hits’ of all the expedition’s photos taken by my fellow-expeditioners:

Btw: the last pic there shows an Ecuadorian delicacy – a cuy – which is a local guinea pig. These are fried, grilled (like in the pic), and generally very well regarded and respected. Even the volcanic lake we’d walked round is named after them. The locals love them. We tried some, and weren’t too impressed. I’m sure it’s because they were guinea pigs, which we know better as pets ).

And finally – for dessert – videos!

All the pics from Ecuador and the Galapagos are here.