While on Española Island, the young albatross leaping off a cliff face for the first time in his life hoping he’ll be able to fly – that kinda stole the show. However, there were other wild animals worthy of mention observed too – including species we’d seen for the first time or had never seen in such vast quantities. And we saw them at Punta Suarez – the westernmost point of the island.

Even before we’d made it ashore in the dinghy we came across a seal ‘kindergarten’. While mommy is out at sea getting the ‘groceries’ in, the little ones are frolicking on the beach!

I wondered briefly – how does mom know which toddler-seals are hers? Logically, I asked our guides; they answered: by smell. They added also how life can be rather cruel for the seals around here: if mommy get gobbled up by a shark while out to sea getting dinner in, her offspring will inevitably die. Other moms won’t feed them – poor things. But, at the same time – if one of those child seals happens upon a mom-penguin – young penguins wind up with no mommy too. And if penguins happen upon… and so on and so forth. I could carry on the ‘chain’ at length. But let’s look at some pics instead…

Besides cute little seals there are lots of iguanas to be found here. Our guide, Jorge, told us about the way of life of these cold-blooded ‘semi-vegetarian’ (like some ‘vegetarians’ I know – who eat just fish!) reptiles, but alas, I can’t remember the more interesting bits… Let’s see… They are born, warm themselves in the sun, feed out at sea, sleep on the land, then dig burrows in the stony earth, breed, then die. Hmm. I do remember, after all. What’s more – they’re the cutest of creatures in their particular mini-dinosaur-resembling way!

In places they seem to swarm together, climbing all over one another…

Even brightly colored crabs can stroll past them and the iguanas just ignore them:

Oh my word: here I go again talking about boobies. To be more precise, it wasn’t me talking about them but Jorge: he was telling us about the family life of a Nazca booby. What I remember is that a booby lays either one or two eggs at a time. If there’s just one – all fine and dandy. If there are two – things get all Darwinian again: once hatched, one will start taking food from the other, and eventually might toss that unfortunate other out of the nest. It’s ‘survival of the fittest’ in its rawest, most literal form! Wait: it gets better… – if neither of the little ones takes the upper hand over the other, mom steps in and throws the weaker one out herself! Brutal! Natural ).

Just as Jorge was getting to the end of his talk about these particular boobies, in flew a second Nazca – quacking loudly (and if you recall, the males whistle, while the females quack). What a racket! And she wouldn’t stop – on and on it went. Meanwhile, the male just sat there by the little one whistling calmly and melodically!

Then, after listening to the cacophony (nagging?:) for a time, the male got up and stated bringing pebbles and sticks to the nest. “He’s tidying up the home,” Jorge commented. “Like doing the dusting, tidying the place, putting the furniture back where it should be – to please the missus!” Yes, sure looked like that ).

Btw, as you can see, all non-vertical surfaces are covered in droppings. A good way of marking out territory really – to keep those pesky humans off their property ).

For the record I really should mention our afternoon port of call on Española – Gardner Bay. It’s simply a peach of a beach and a sensational spot for a spot of bathing. So, as you can see, just like most of our extreme expeditions in far-flung corners of the planet, this one to the Galápagos was similarly intense and physically punishing ).

And everywhere you look, ever-present seals taking it easy – just like us! We hardly noticed them however – who’d have thought we were non-stop snapping them just a few days ago.

Crab sheltering from the waves:

Now for a few words on underwater entertainments here… 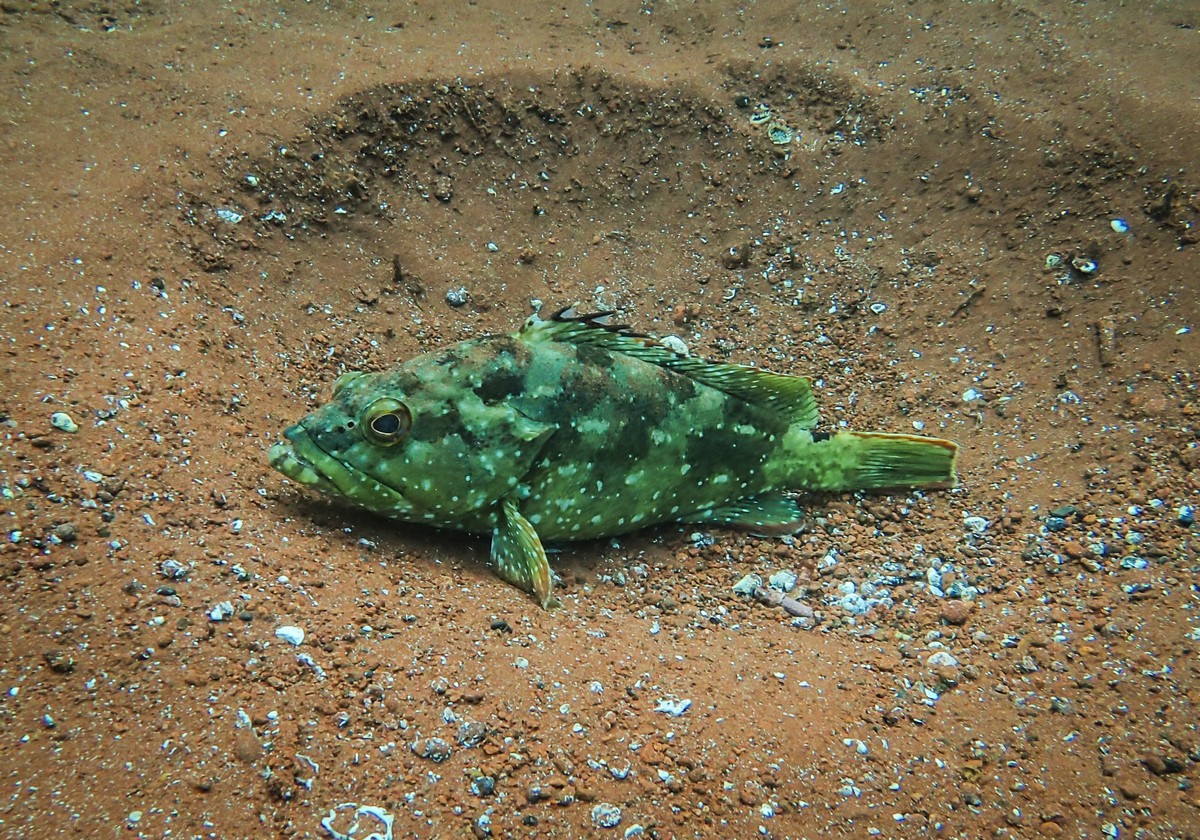 Well, as you can see from the pics – there are some fabulous fish here, but… the cold currents limit the variety thereof somewhat. There are plenty of fish here – but they’re all kind of feeding fodder (for the seals and boobies). Also, the corals here are somewhat under-par. Another gripe: we dived down near the beach, so the water was always kinda foggy so we couldn’t see all that clearly. 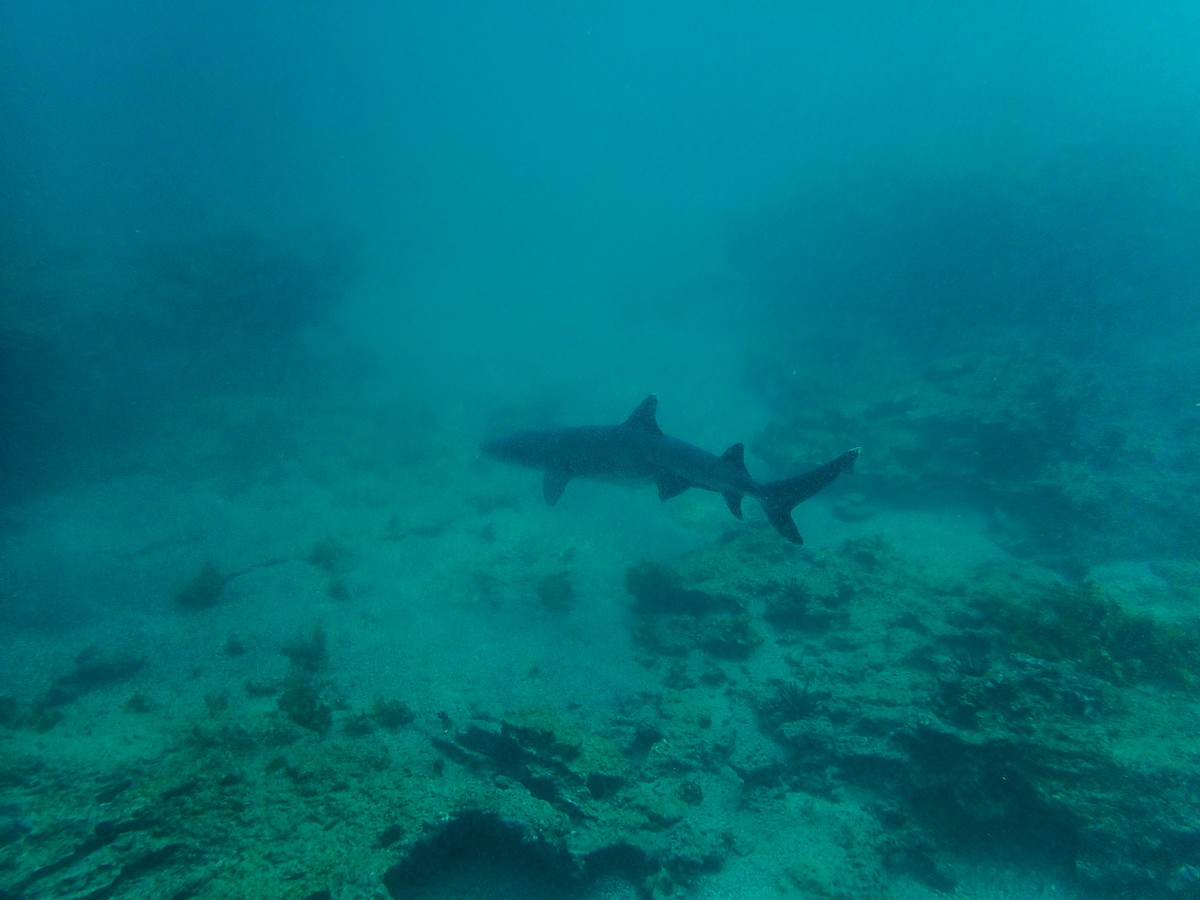 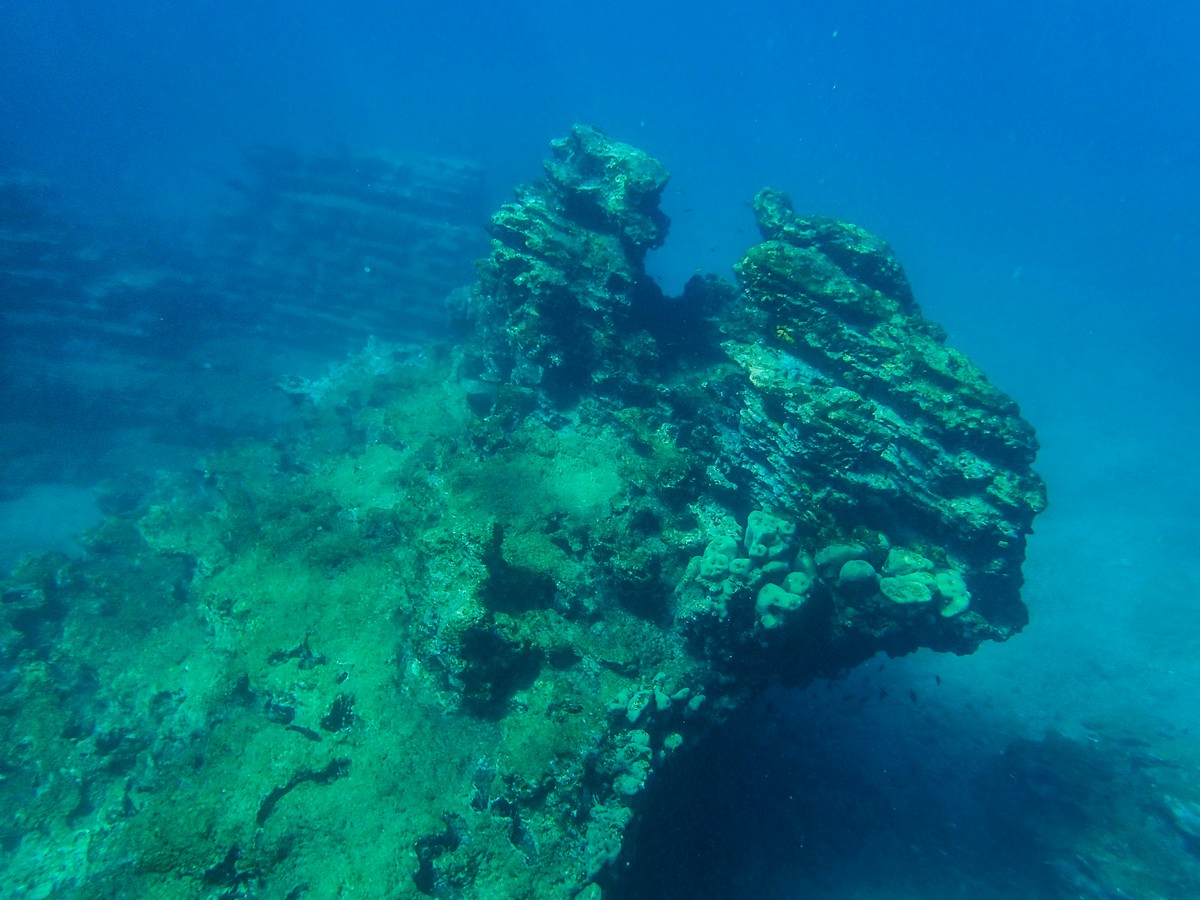 Starfish HQ. We saw hundreds here – all in one spot! 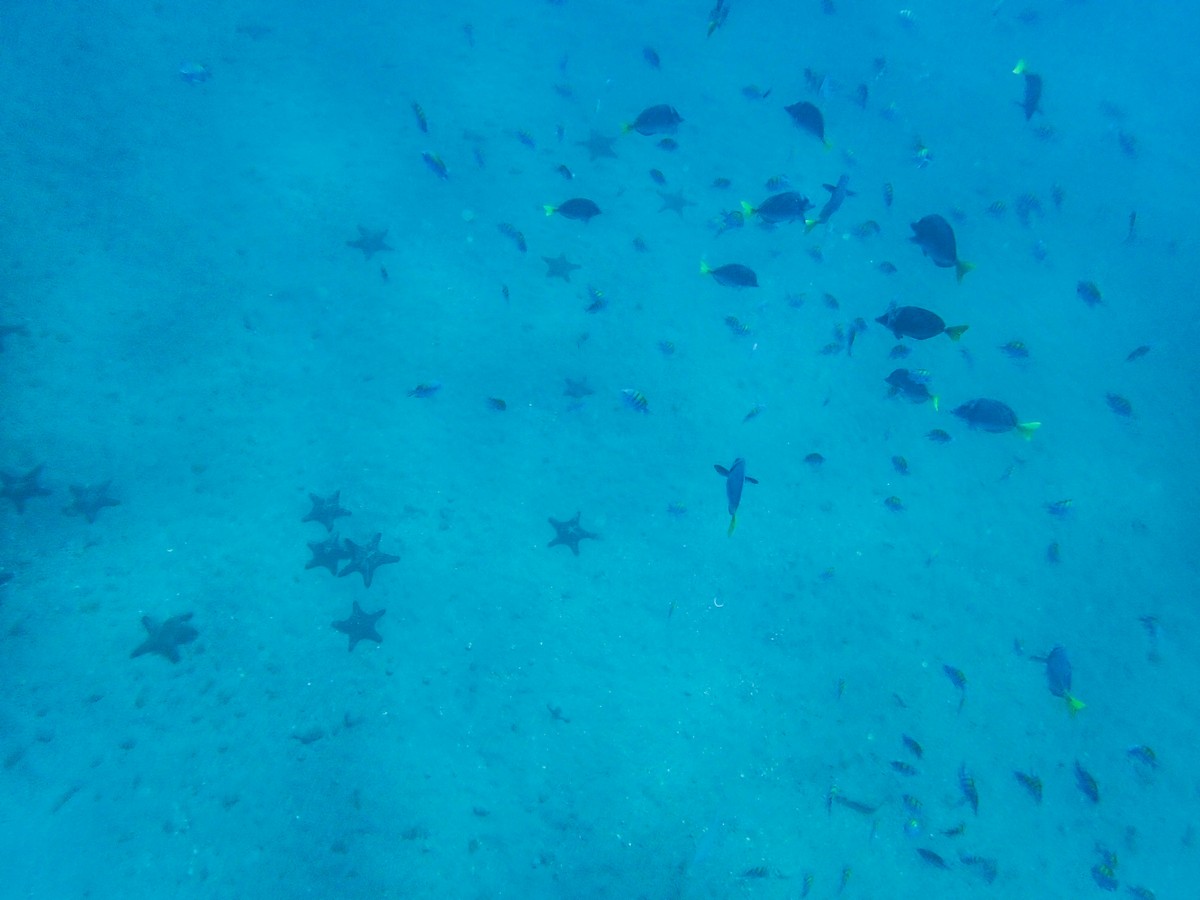 Also on this day we saw turtles and swam with seals, but I’ll tell you about that next time.

PS: Our itinerary for this day: 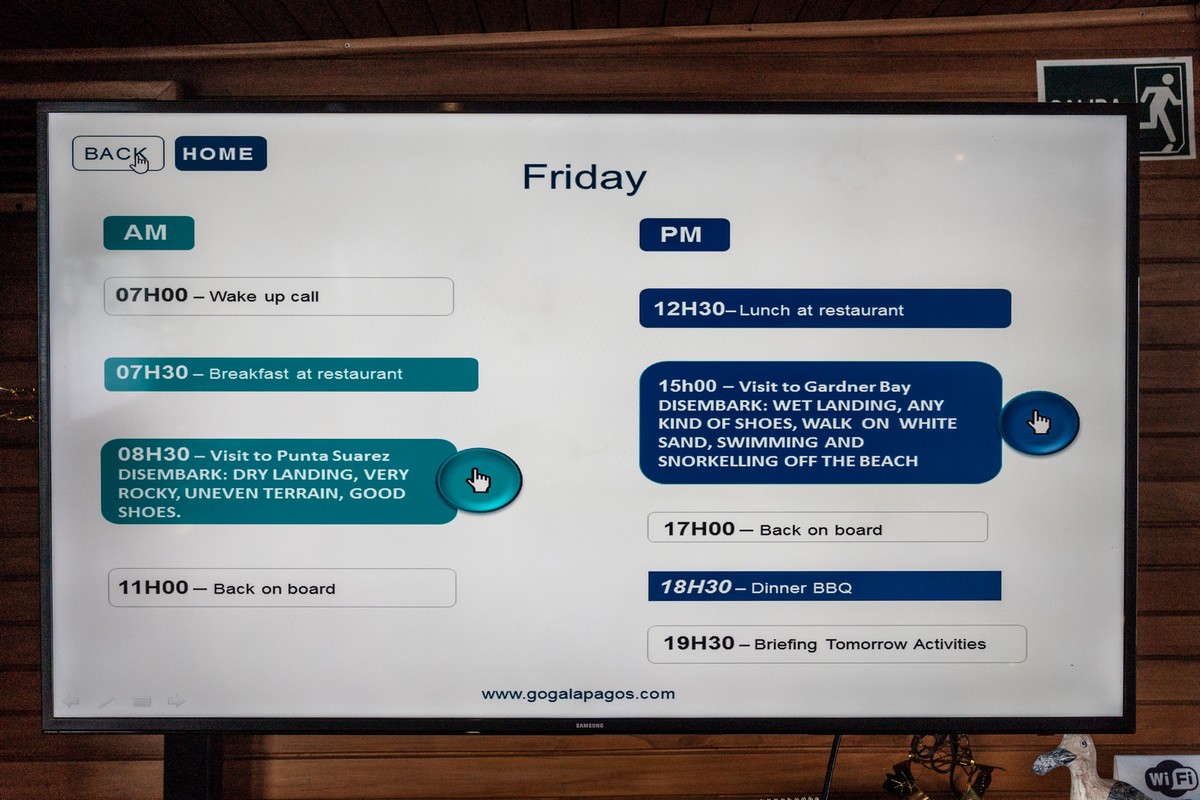 All the pics from Ecua-d’or are here.