All righty. Next up on our China-2018 mountain walking trip – Mount Longhu / 龙虎山, which literally means ‘Dragon Tiger Mountain’.

But there’s more to this place than just the mountain. There’s also the river that runs past it; there’s a traditional Chinese village that’s must-see; there’s rafting down said river; there are assorted entertainments in the nearby park; oh, and most importantly – the mountain happens to be one of the birthplaces of Taoism, with the respective thousands of years of heritage and history. As an intro to this marvelous mountain and environs, first – some pics:

As was to be expected, the entrance to the park and tourist center are grandiose and spacious: grandiose – because that’s how China rolls these days when it comes to tourist infrastructure; spacious – to be able to handle the masses of (incidentally, mostly Chinese) tourists who visit…

The park is quite a large one. The first ‘attraction’ was a walk among the cliffs, then different water procedures, the ‘Village without Mosquitos’ (that’s the translation of what it’s called), and so on. In between all the aforesaid you can take one of the non-stop shuttle buses: a simple feature, but very convenient – just what’s needed. 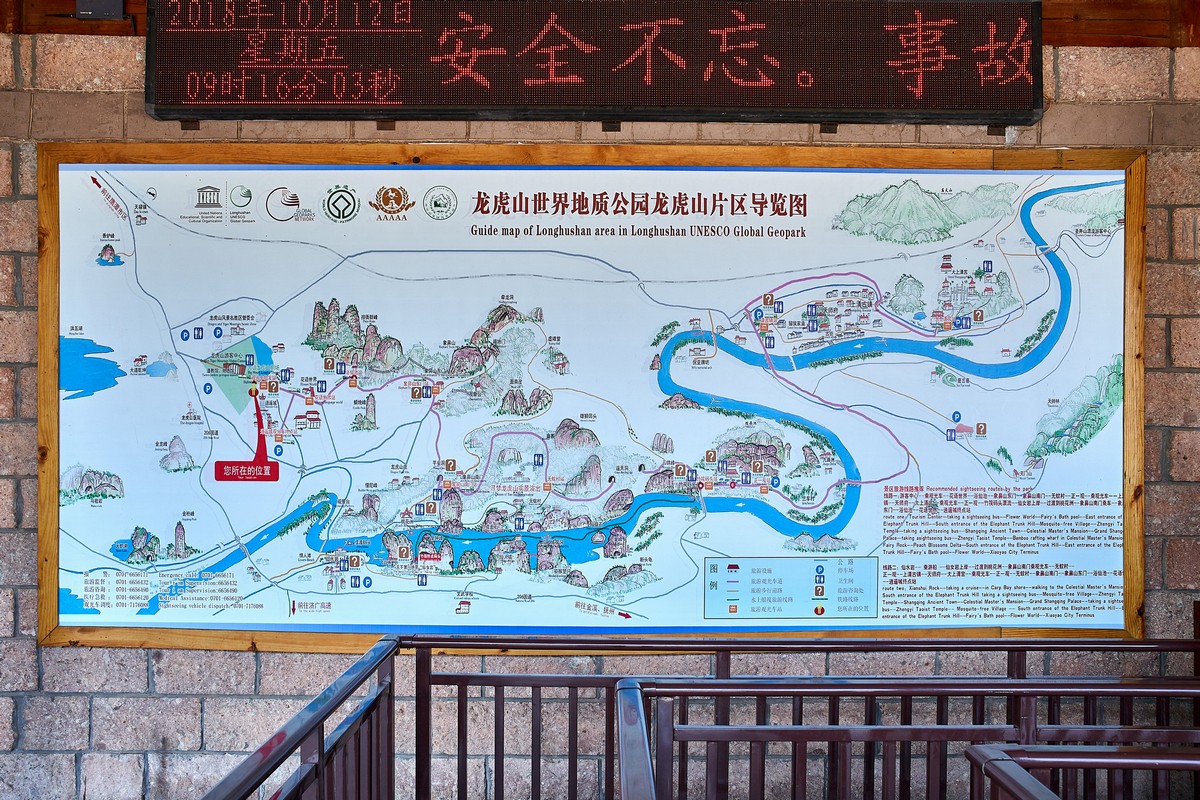 I appear to be repeating myself, but, as can also be expected – this is a top rated – AAAAA – tourist spot

We buy our entry tickets, our bus arrives, on we hop… 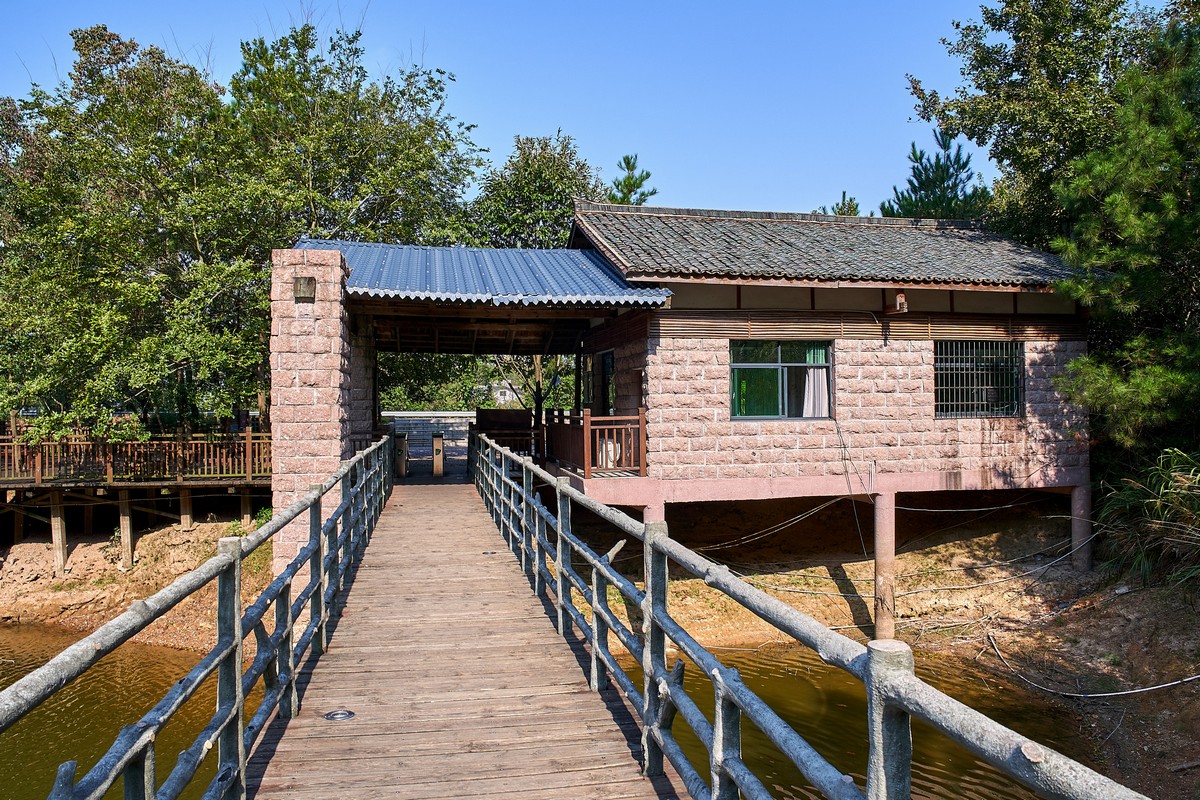 Our first stop was for a ‘walk along the red Danxia landforms’. Sounds great. Got even greater when we found out the walk ‘along’ the rock would be on an elevated pathway stuck to the cliffs. We came to a sigh warning ‘3km until the exit’. No probs to seasoned hill volcano climbers like ourselves ).

This path was really something. One side – sheer cliff face; the other – Oh my gorgeous greenery!

Woah – sometimes that gorgeous greenery creeps over to the other – cliff face – side!

Onward we march, as if on rail tracks. Yes – quite similar: equally hypnotic! No really. This path is just incredible. It’s just a path, you say. But… you need to try it yourself to believe it: the experience is very special…

Glass floors are rather popular in China. But this one is for some reason covered up with a rubber sheet: 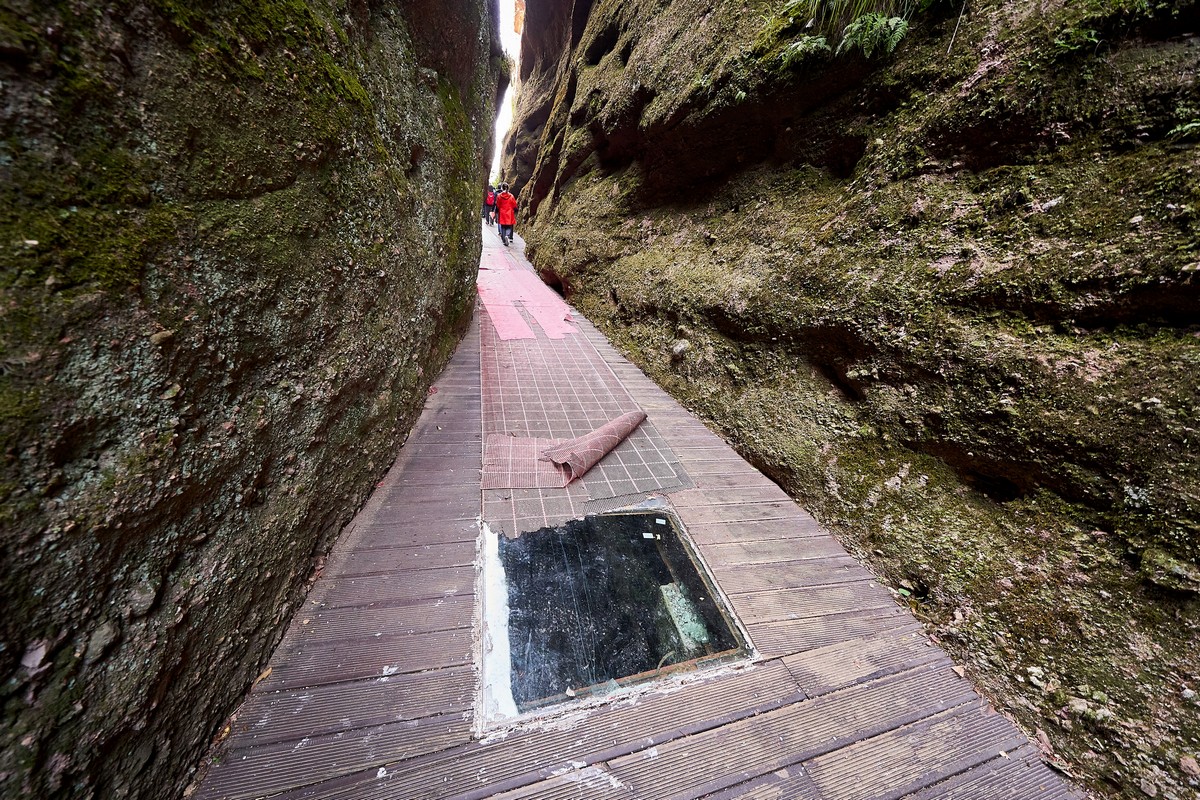 Hmmm – underneath the glass there’s some shattered glass. I guess they covered it up so as not to scare the tender tourists. 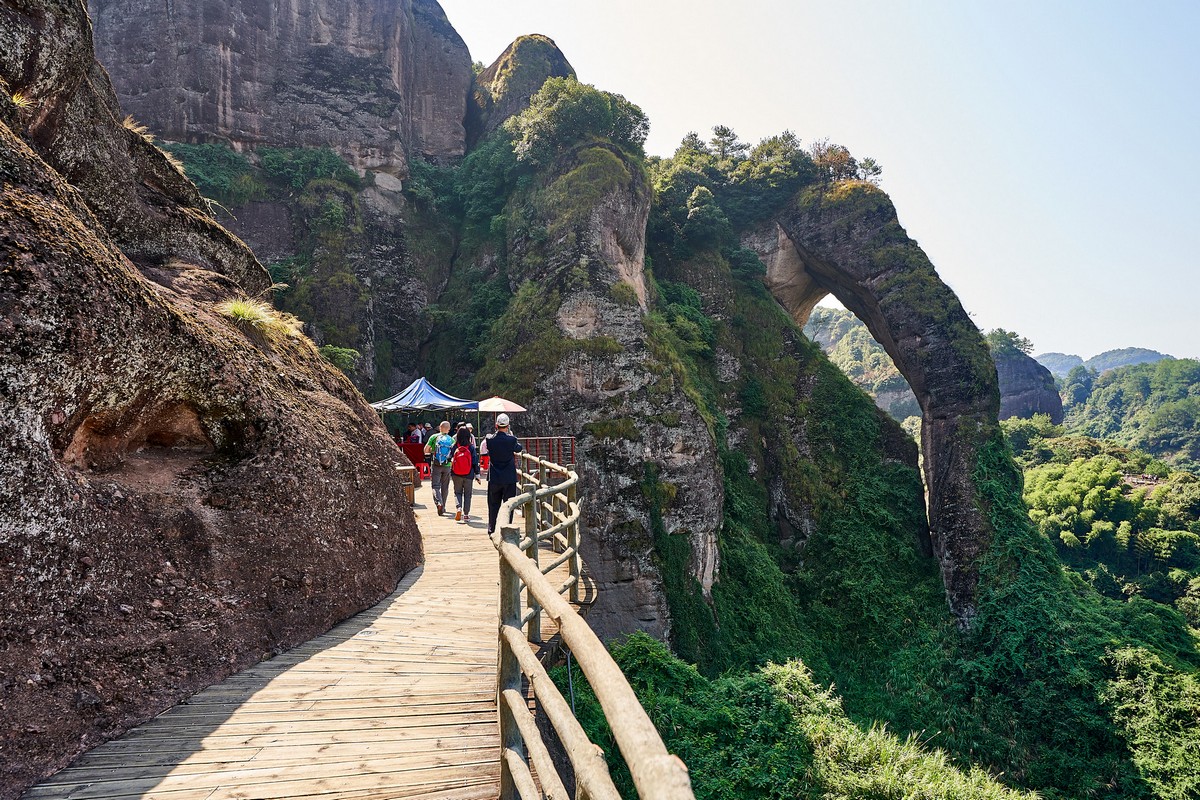 Special photography platform, which comes with its own photographer and color printer, which can be rented for not so many Yuan.

We descend down toward the end of our walk – boo!

Here’s the elephant trunk from underneath; looks more like an anteater from this angle ). 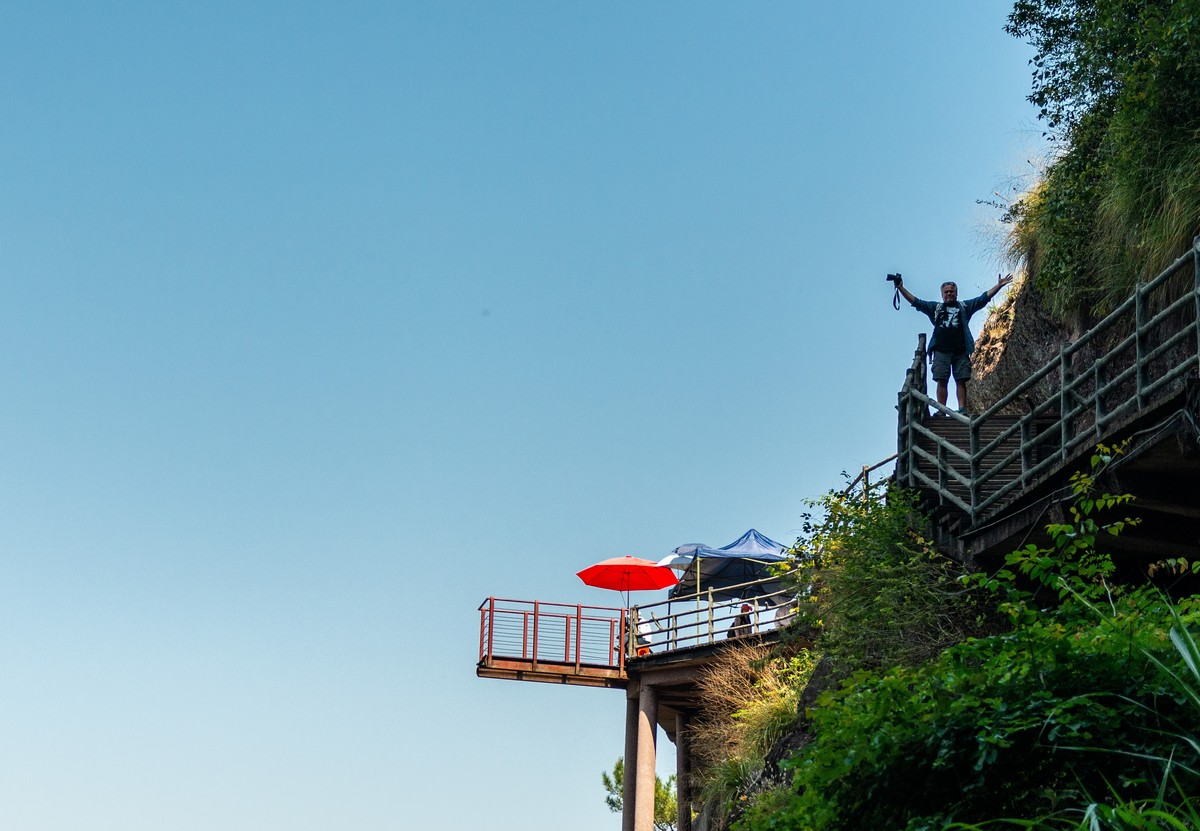 After our breathtaking and totally unforgettable walk, it was time for more excitement… rafting! So we piled on to the shuttle bus and were ferried to the river, not before a brief stop for lunch.

The river that runs through these Danxia formations… fresh air, the splashing of the water, the grandiose panoramic scenery. Our guide is conducting our excursion in a local dialect that I know nothing of, but that adds to the charm.

The one thing that spoiled the proceedings just a touch was that pseudo-mini HAL 9000 on the bow. It’s there taking pics of us all the time, which you can purchase after you dock. Quite why we’d want pictures of our faces I do not know. As if we hadn’t seen them before. As if we didn’t have thousands of dollars’ worth of hi-end kit that would do the job better… ah – I’ll stop there. Petty tortures – they’re all in the mind, after all, as the Stoics always said ).

But HAL 9000 there got me thinking. You’ve probably read how, say, the British have become perhaps the most surveilled nation in the world? Well, China is similar. There are cameras EVERYWHERE! Often where you least expect them. There was one even at the very top of a mountainous rock formation – literally in the middle of nowhere, as if it had grown up out of the rock. In a bus we were on we counted six cameras, one of which was pointed directly at the driver’s face just 30cm therefrom! Maybe they don’t all work – mere placebos to keep the peace or something… 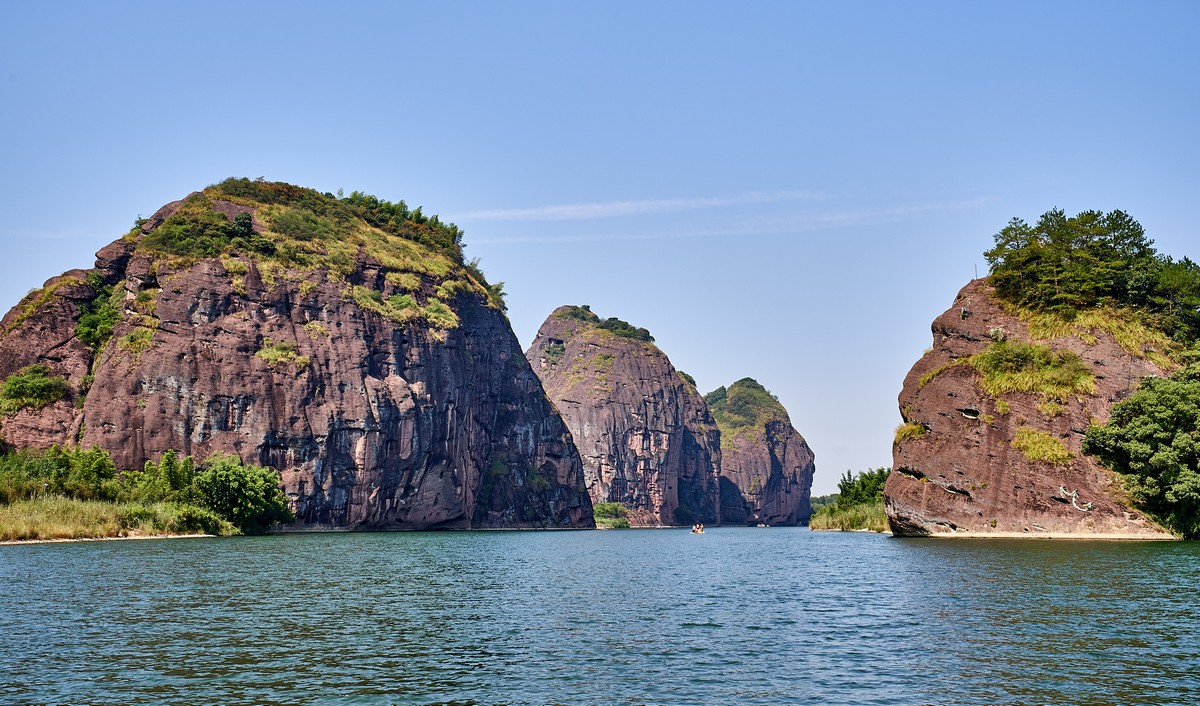 Check out the stone ‘book’: 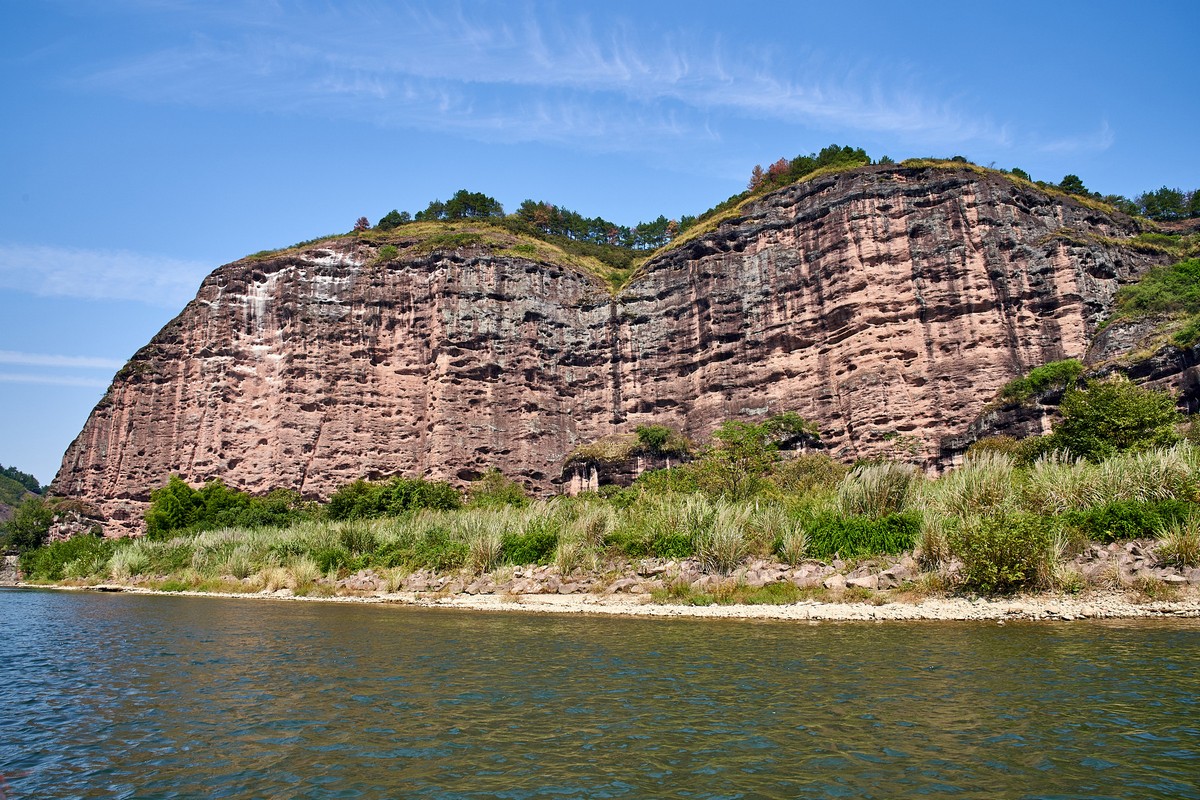 Do you, dear reader, see a book? 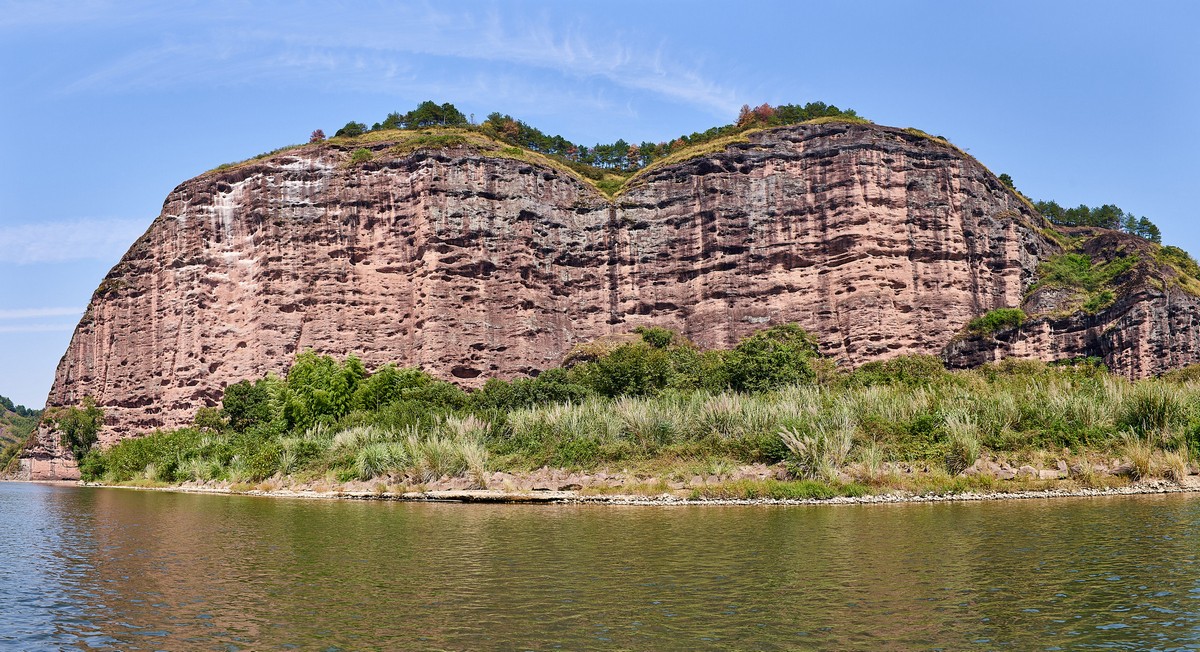 Btw – the white towards the top… That is… 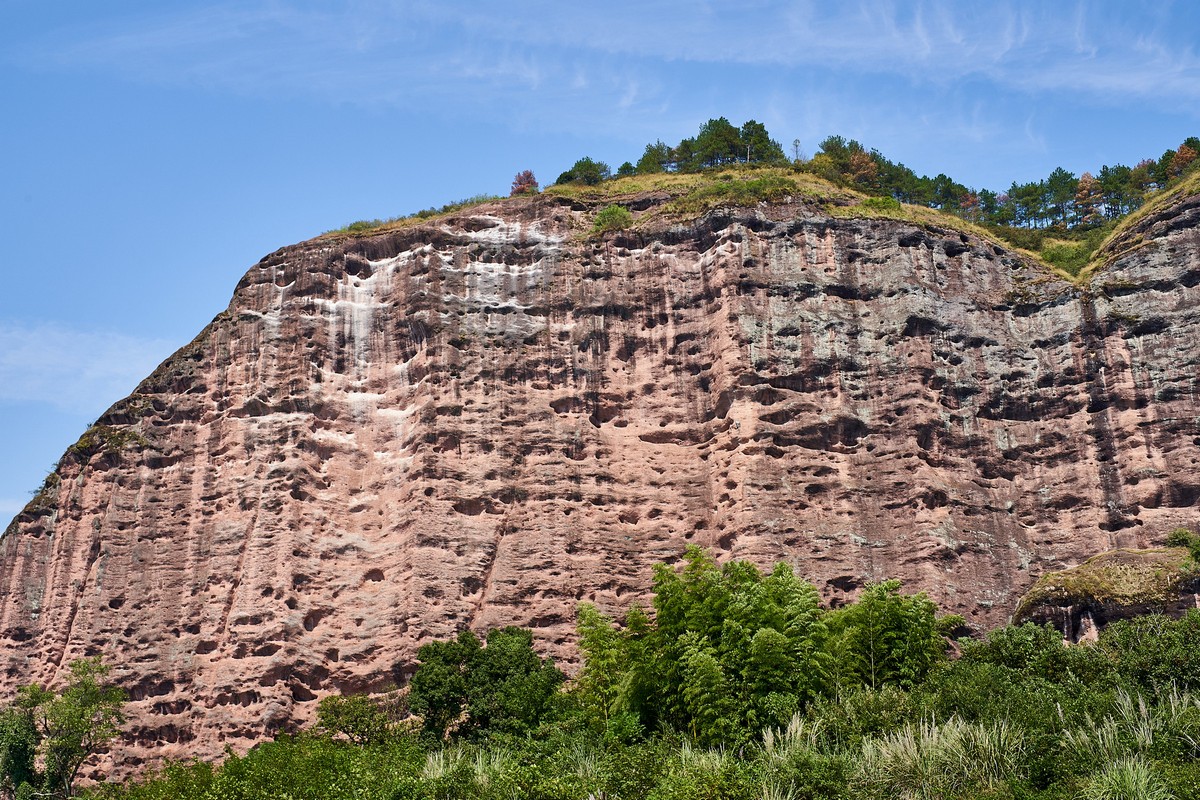 …yes, you guessed right. But let’s not dwell on that.

Btw – the thin vertical lines under the cliff at the bottom – they’re reflections off the ripples on the water! 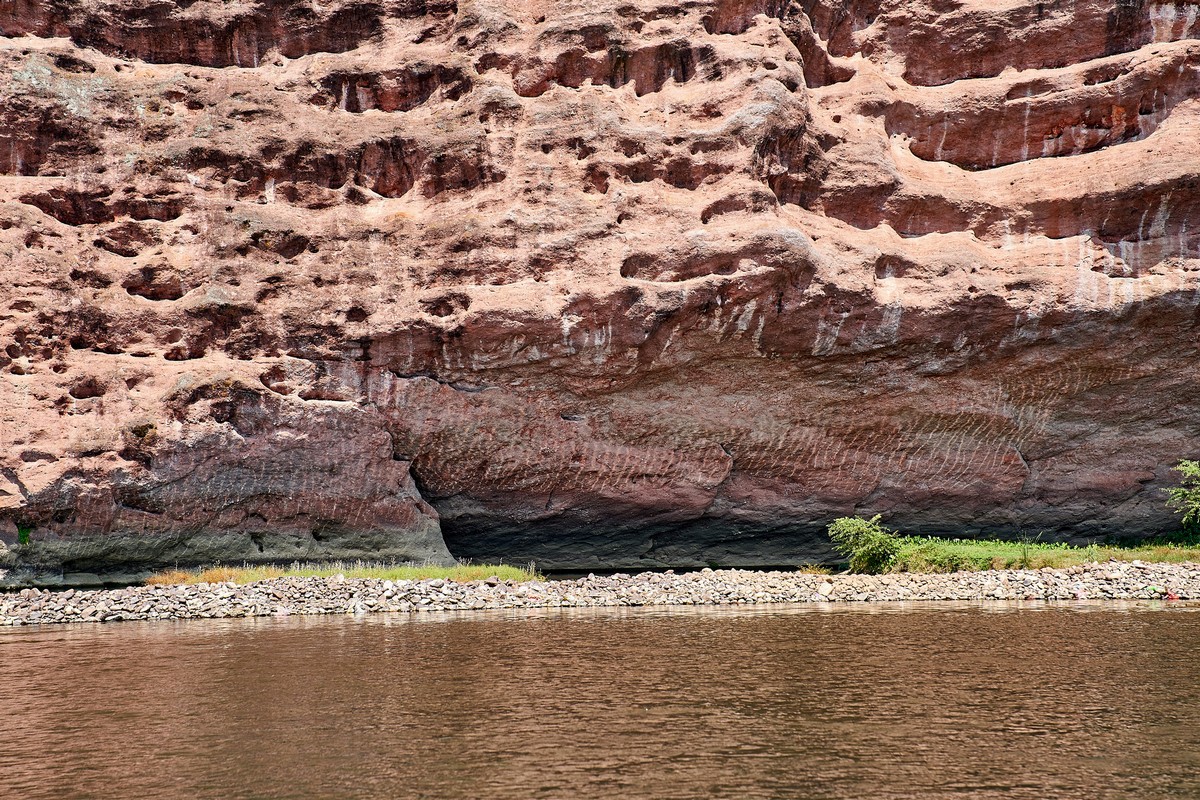 Here’s how they look on video:

Meanwhile, onward we float on our… float – past the next still life masterpiece…

Yes, as you can see – perhaps – the rocks start to resemble human faces. Lips, eyes, nostrils. Oh my. A bit creepy. But still awesome:

Btw, just like in Ha Long, this tourist attraction suffers from having its own flotilla of river traders selling perfectly useless knick-knacks or edible offerings of questionable quality. And there was me getting all ecstatic and meditative, all to be spoiled by… Oops: there I go again. Epictetus or Marcus Aurelius wouldn’t be impressed…

Here there are ancient tomb-caves in which they laid to rest the elite back in the early days of Taoism/China.

But enough about death. Onward we float!…

Yep, the fairy worked a miracle here. If you have questions – put them to her please.

Simply some beautiful bamboo near the exit: 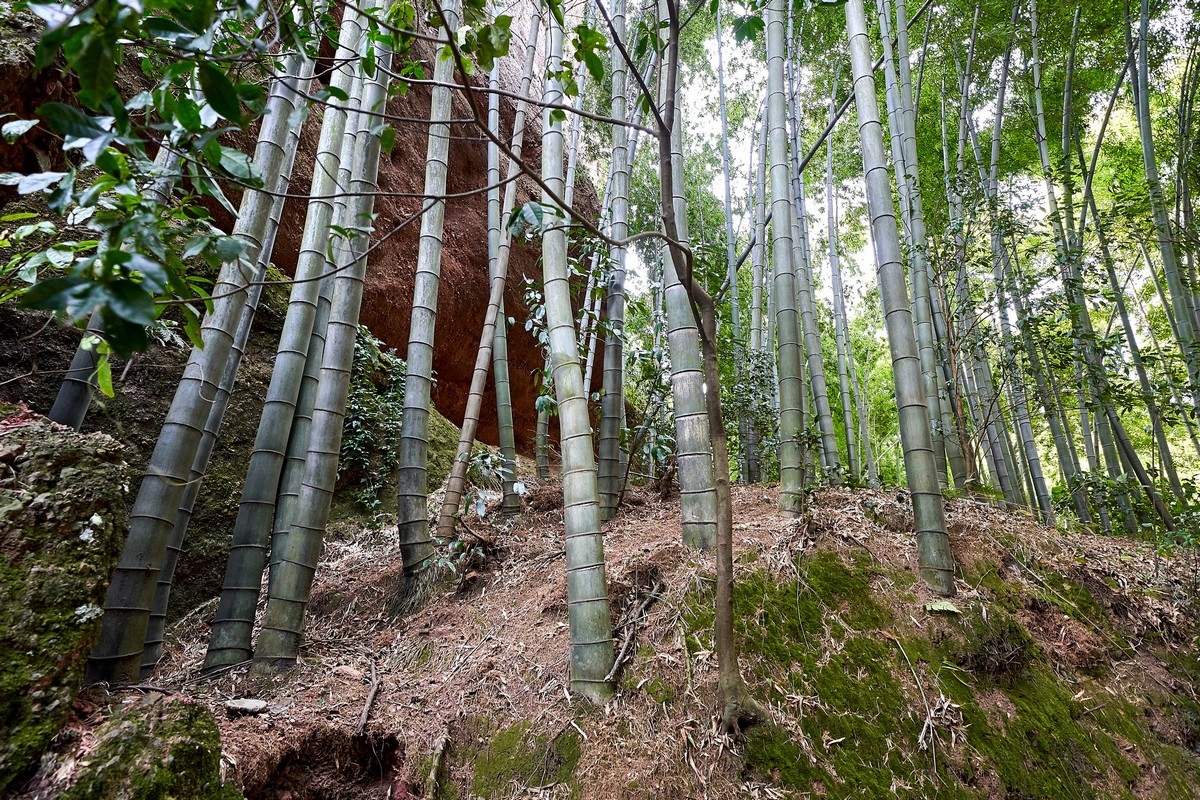 Now, remember how at the start of this post I mentioned an ancient village? Well, there are several, and you need to be careful with which one you choose. One is called the ‘Village Without Mosquitoes’! But if I remember rightly what the village lacked in mosquitoes (there were literally none), it sure made up for in flies. There were swarms of them! I wonder, did we get the wrong village? Or was the mix-up down to the Chinese sense of humor? Hmm – I doubt it. Was it really that there were no mosquitoes but it was a free-for-all for flies? If so – why? But I digress…

So, we finished our excursion for the day at what is claimed to be a genuine ancient Chinese village. Sure, the inhabitants drive around in Fords and Volkswagens, but there is still a lot from a long time ago here. I wonder though – could it be imitation? At least to a certain extent? For the real ancient China, as we all know, really is ancient, tending to have a ‘BC’ after its key dates, not ‘AD’. All that must be long gone – with time alone, but additionally what with the opium wars and eternal cultural revolutions. What here is at least a good copy of how things were millennia ago? And what is fake? I dare not try to answer that question. I concentrated on enjoying the show, whatever ).

We arrived in the village on the bus, we get off… only to find – zero folks! No one! In China?!! Ah, once again I have to boast of my inside knowledge – the weeks after Golden Week – that is when you need to do tourism in China ).

Now – some photos of the place.

Girls zoom past on mopeds, some stop and attempt conversation with their basic English (they don’t know we’re from Russia, but can clearly see we’re not locals!).

Chinese cultural legacy – is it religion here or philosophy? Not sure we Europeans will ever work it out. But, again, just enjoy the ride!…

These are just two photos out of my hotel room:

PS: a few more pics of my travel companion and photographer, D.Z.:

That night, it was time to check out a nocturnal Longhu…

Fortunately, we caught a music and dancing and light show of a totally unusual format…

All these effects stem from little houses along the riverbank, which we’d seen earlier by day:

The show begins. Oh my glitzy! Installations, acrobats in addition to the music and lights: phenomenal. Reminds a little of Cirque du Soleil from Canada – only better!

After the first part of the show the audience get back on their boats for the second part.

This was rather an anti-climax after such a sensational first part. Never mind…

On the whole a super show: most worthy of catching if ever you’re planning on getting here.

And that’s all from Longhu folks. But more tales from the China side tomorrow…