Having strolled about Longyearbyen, it was time for the next leg on our mission to the North Pole – to get to Barneo ice camp. Here, much like in Longyearbyen, things weren’t quite so extreme and harsh as might be expected. The only issue for first-timers could be a queasy feeling in one’s lower abdomen – perhaps caused by butterflies.

All kitted out, off we fly!… 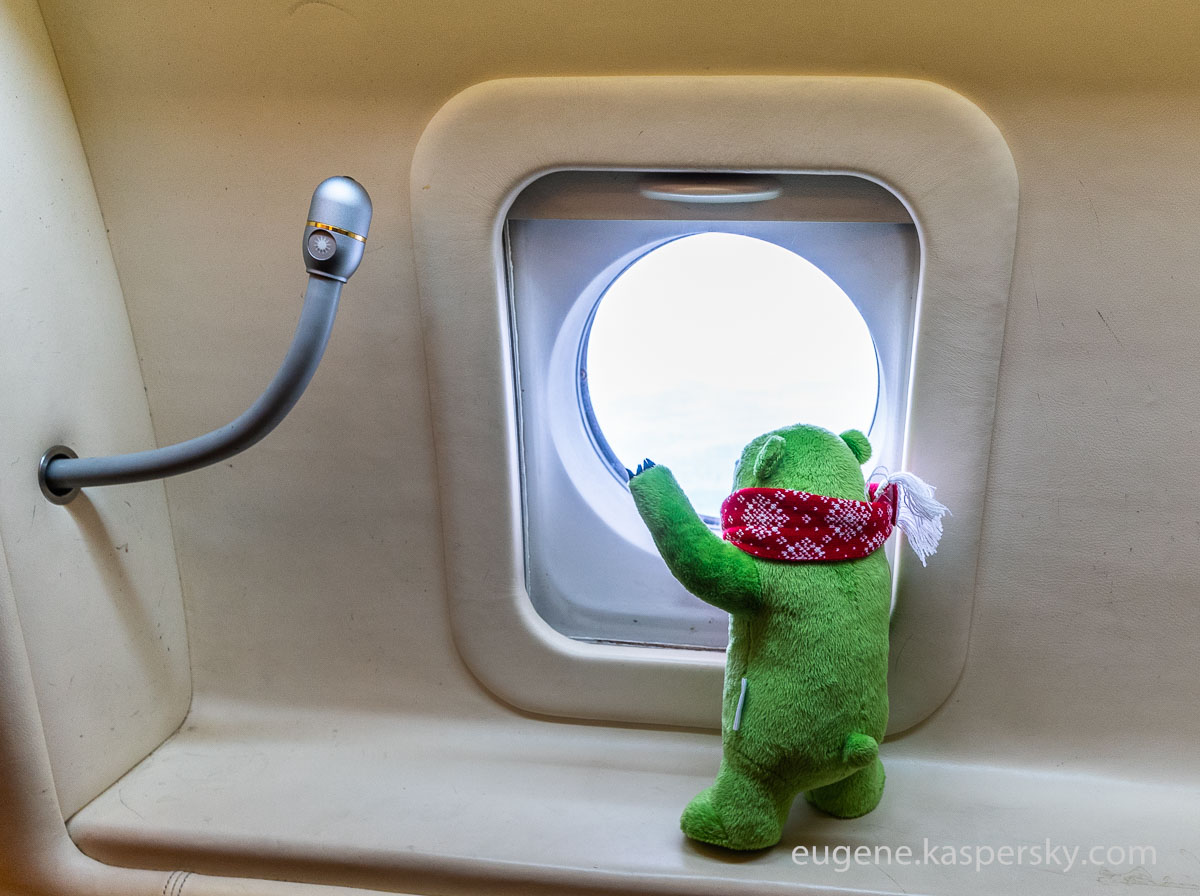 And just over two hours later…

…We descend toward this here… welcoming ice. Those aren’t cracks – they’re huge gashes in the ice. Yikes!… 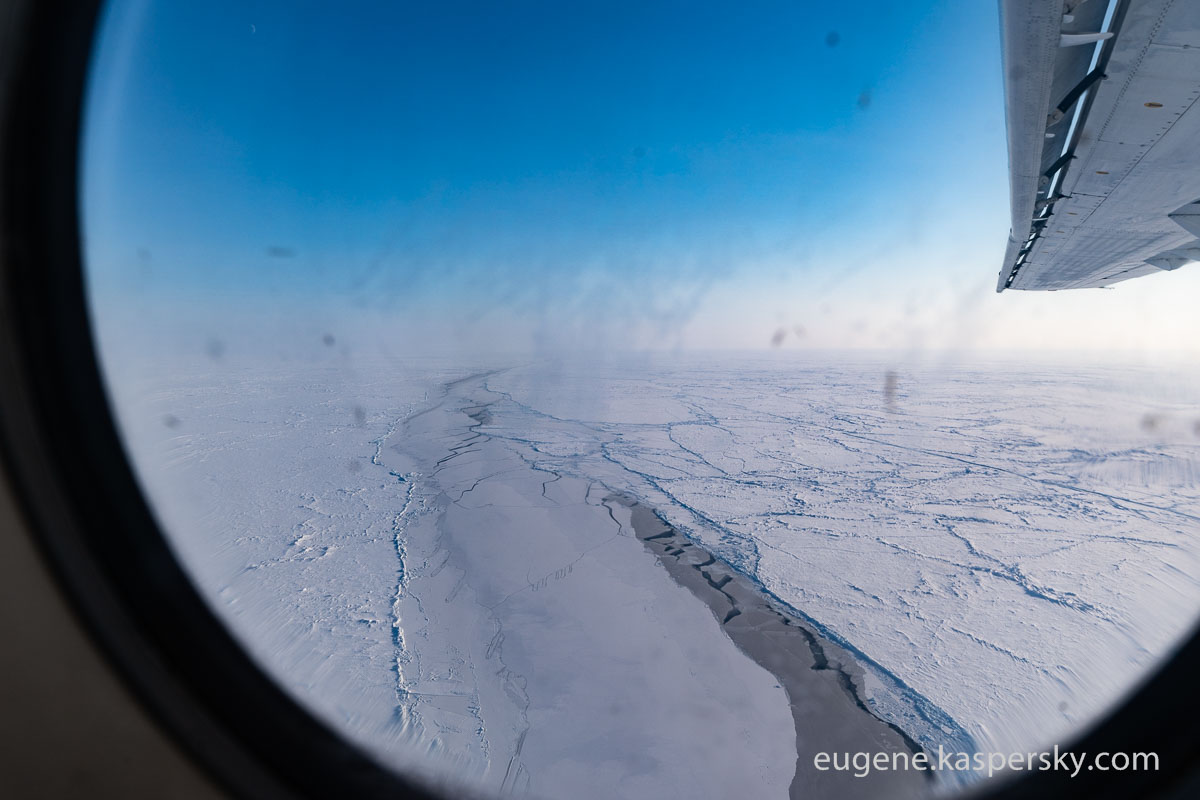 We touch down – away from the gashes – onto the ice. “Ladies and gentlemen, we have arrived at Barneo ice station. Please make you way to the exits and leave the plane. Make sure you’re suitably dressed!” 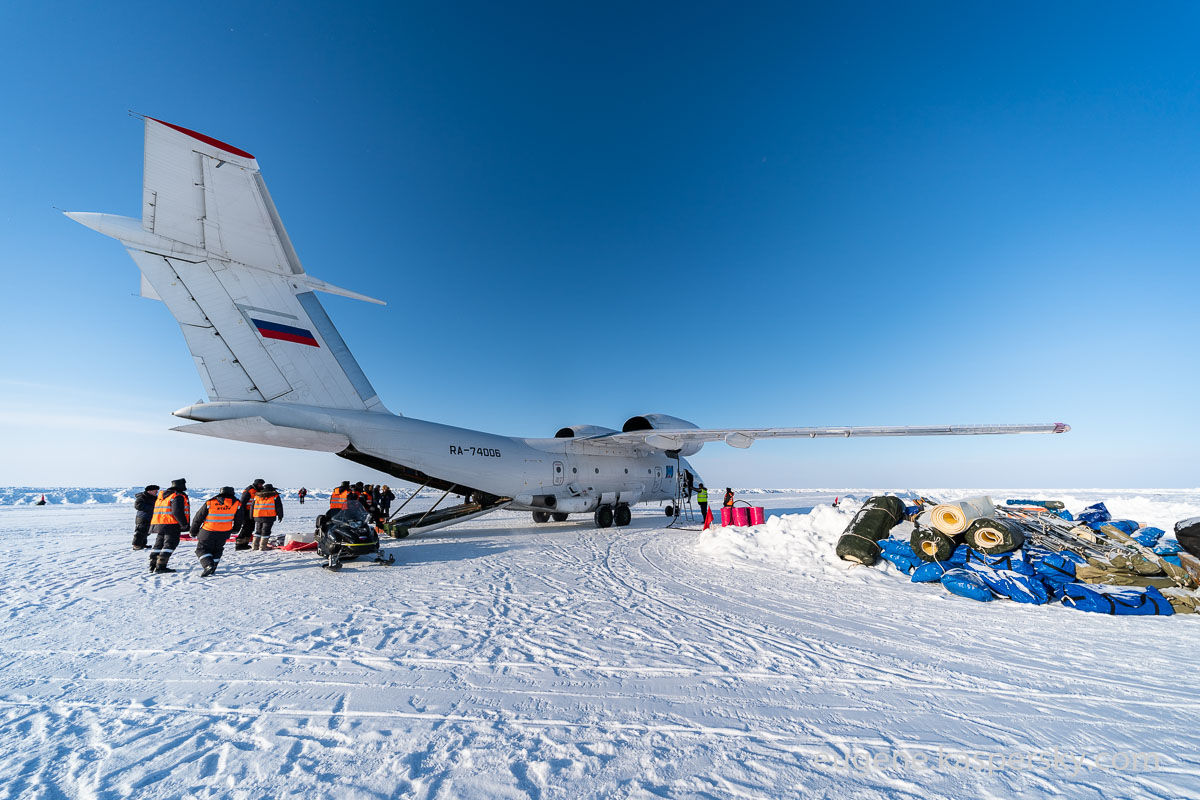 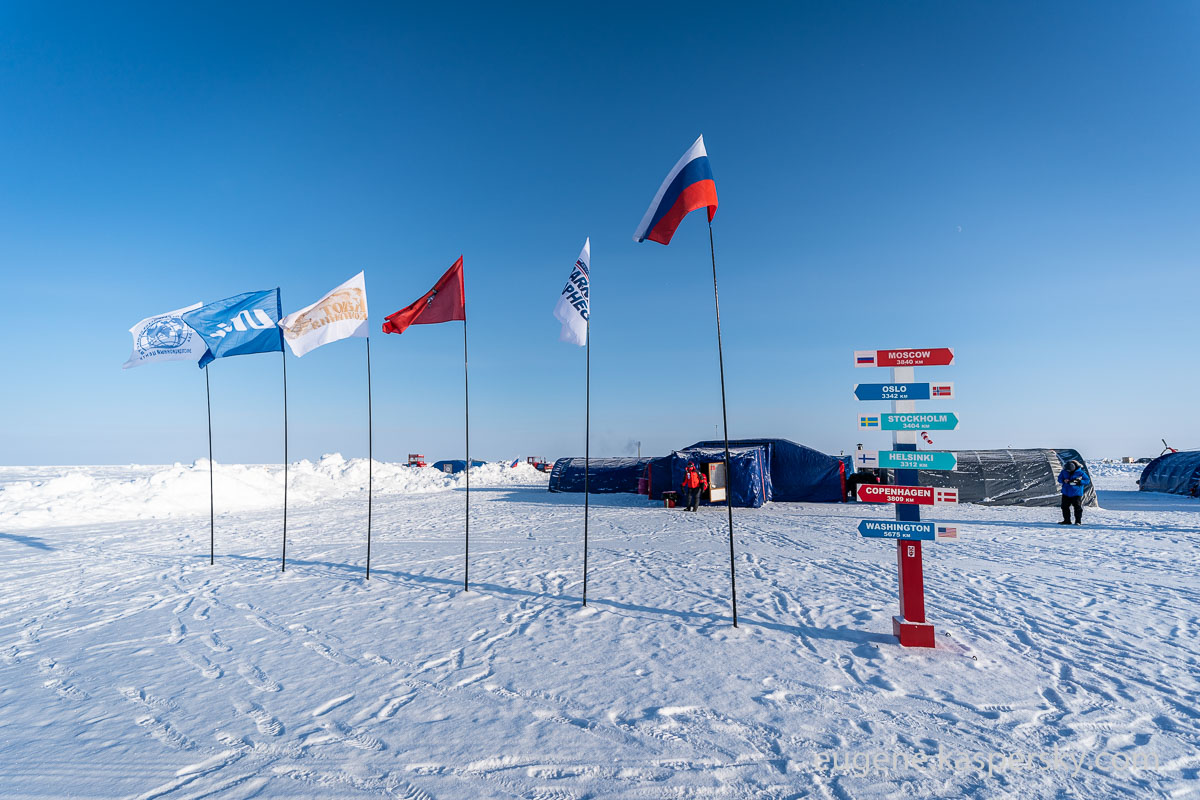 While at the camp I was given a few different versions of where its name came from. One states that one of the first radio operators’ call sign was ‘Borneo’, but so as not to be confused with Indonesia, they changed one letter. Another exemplifies the specific humor of the polar station‘s crew. I ~quote: “The station’s name – Barneo – is nothing but a bit of fun. The Russian polar explorers made it up as the weather conditions at the base are the complete opposite of those on the tropical island of Borneo in South East Asia”!

This is the camp’s canteen where much time is spent not only eating but also whiling away the hours – of which there can be a great many free – long – ones while waiting for the right weather conditions for an onward flight. 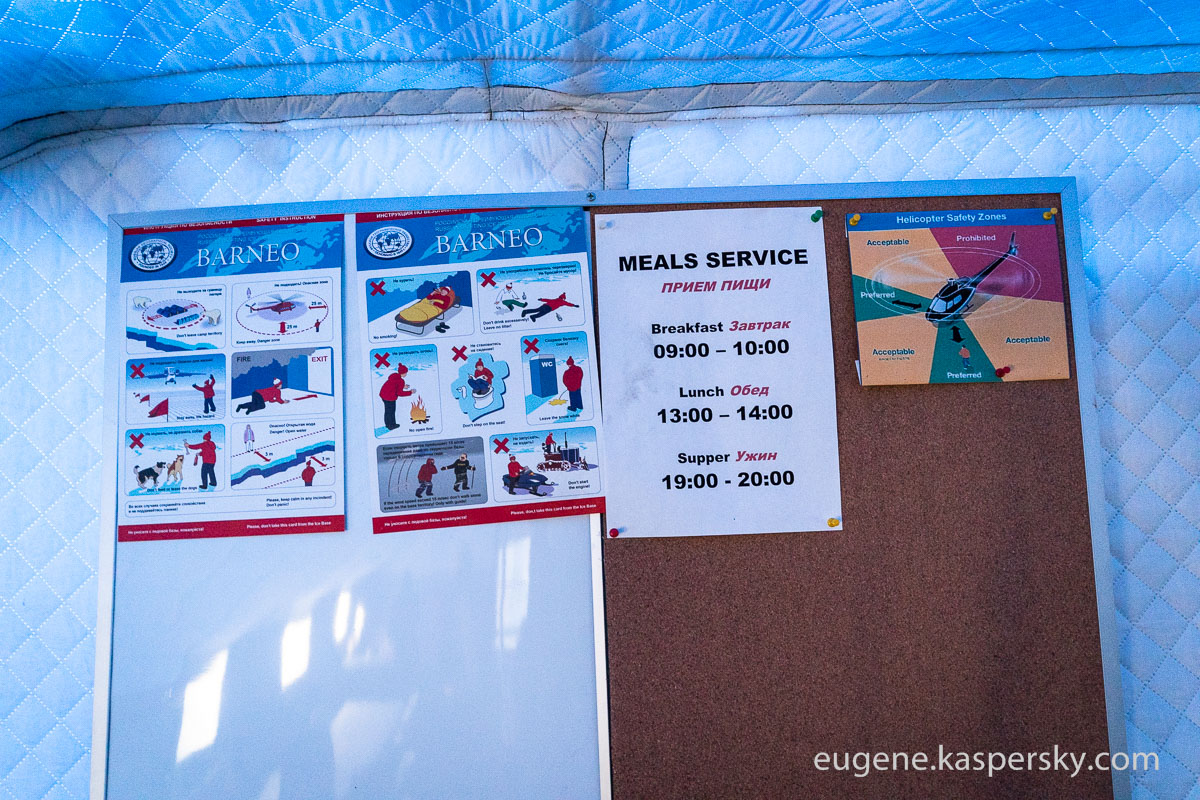 Aha – one of the most important rooms of any polar camp worth its salt ice – the bar, albeit a very modest one. Pricey too! (Hmmm. Why in euros? Surely Norwegian krone would be more suitable? Everyone who comes here comes via Svalbard so is sure to have some krone on them). 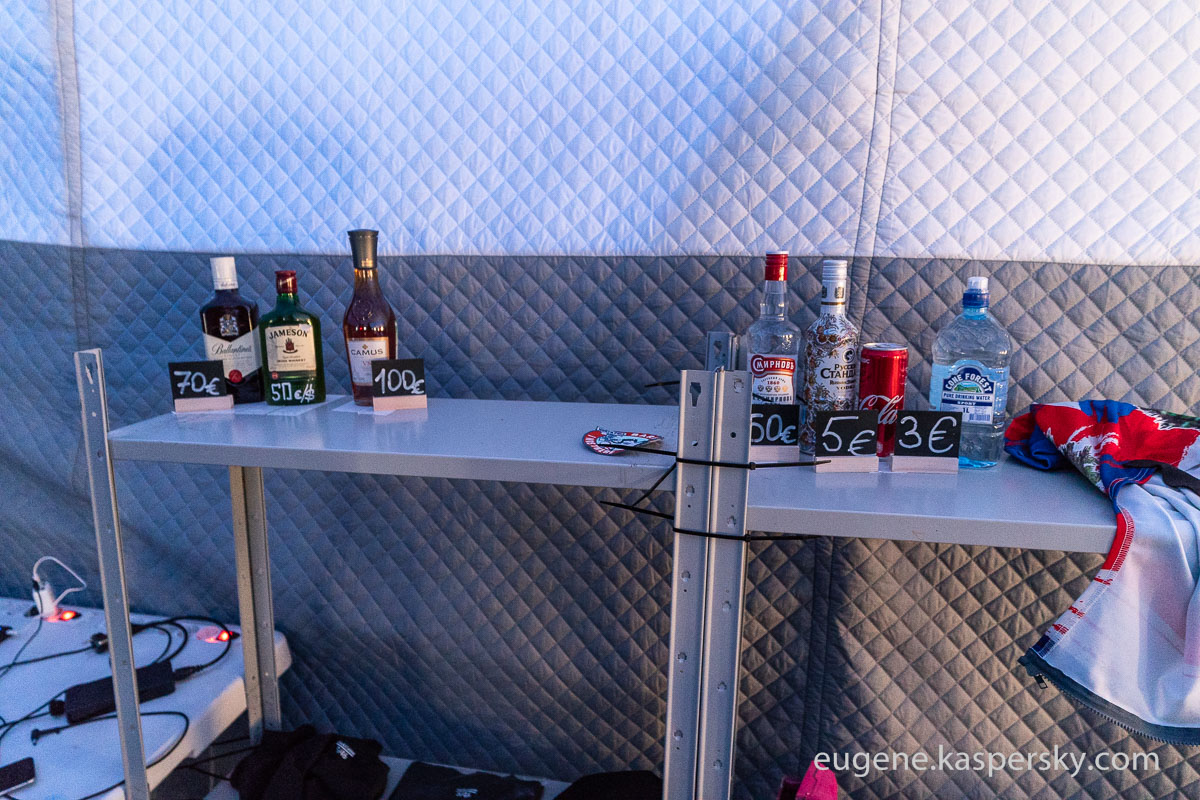 Next to the bar – docking station. Based on personal polar experience, I even brought my own multi-socket extension lead, as free sockets can be hard to come by. Didn’t really need it this time, but it’s always better to be safe than sorry.

Aha – another important installation of any polar station: the… lavatories. ‘Outside loos’ – crikey, that’s what folks had in their back yards in the early 20th century and earlier. Well that’s what they have here too. Main thing: clean and out of the way – and not a single filthy fly buzzing about around it ).

Here’s the camp’s ‘central hearing system’. It highlighted the camp’s Russianness by being constantly in overdrive and heating up the premises to subtropical temperatures – so much so we had to open the doors to let some freezing air in! (In case you don’t know: every apartment, metro car, restaurant… in fact any building in which folks may be found, between fall and spring – across the whole of Russia – is always piping hot. ‘Central heating being turned off every night’ – an alien concept :). 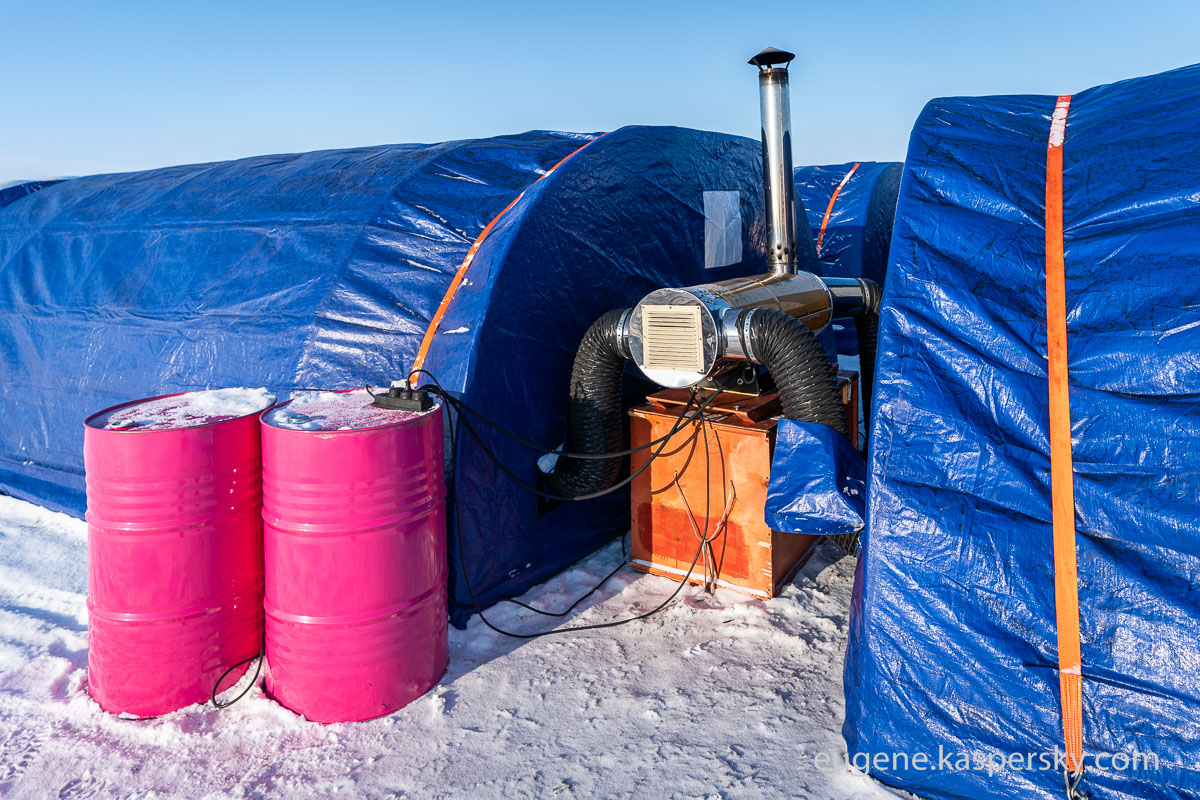 Inside our sleeping quarters: 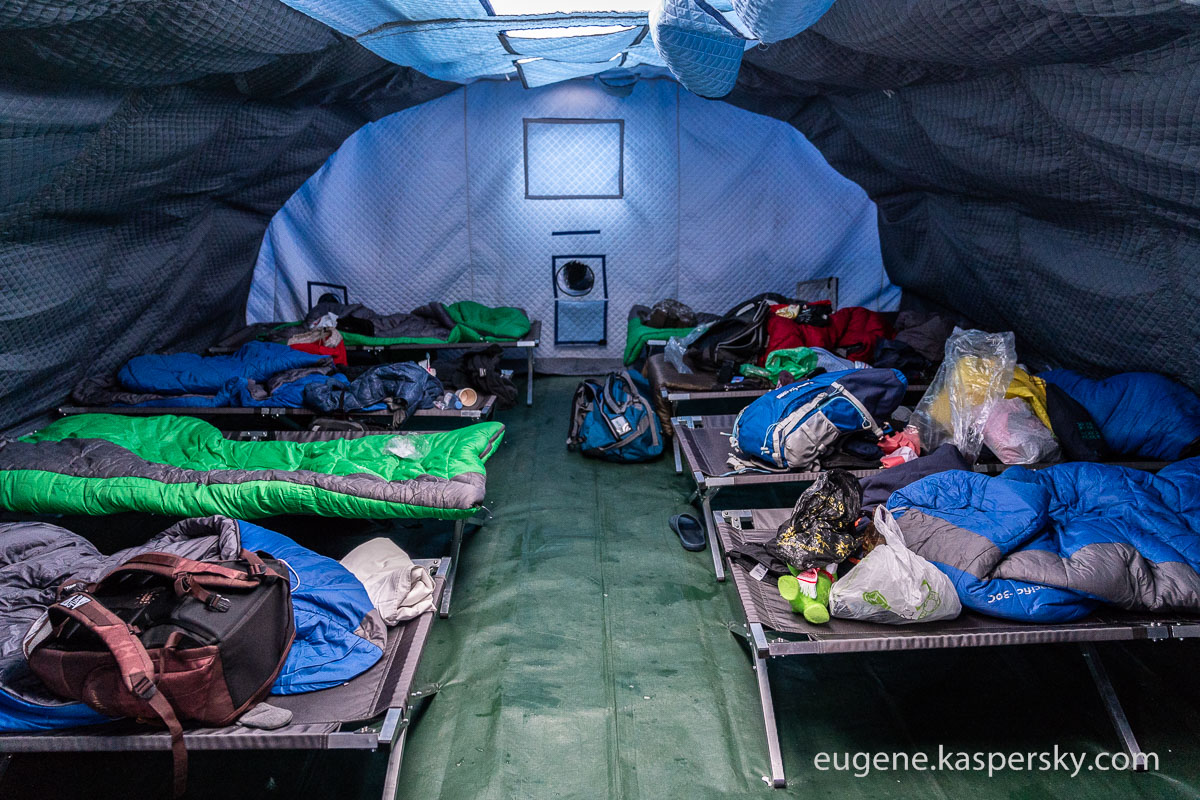 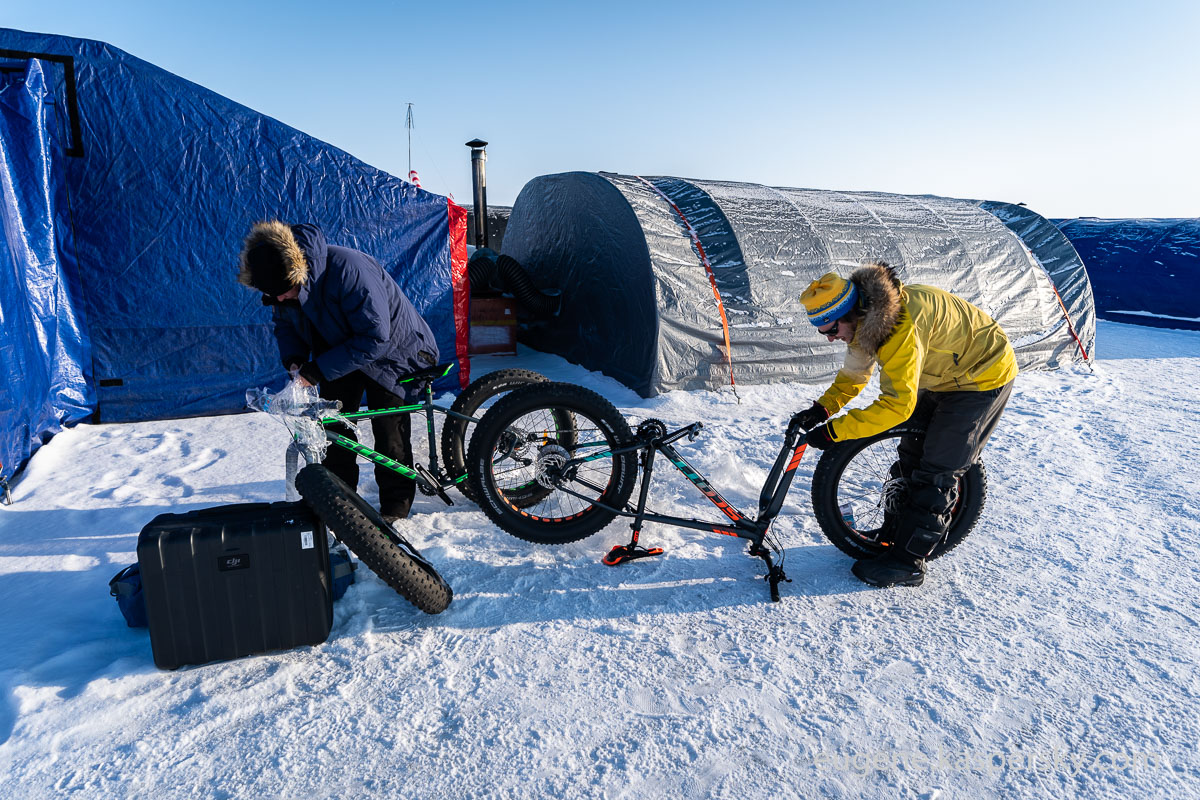 Well, well. Small world: who should happen by but Oleg Tinkoff! We used to share office buildings. Now we share Barneo! 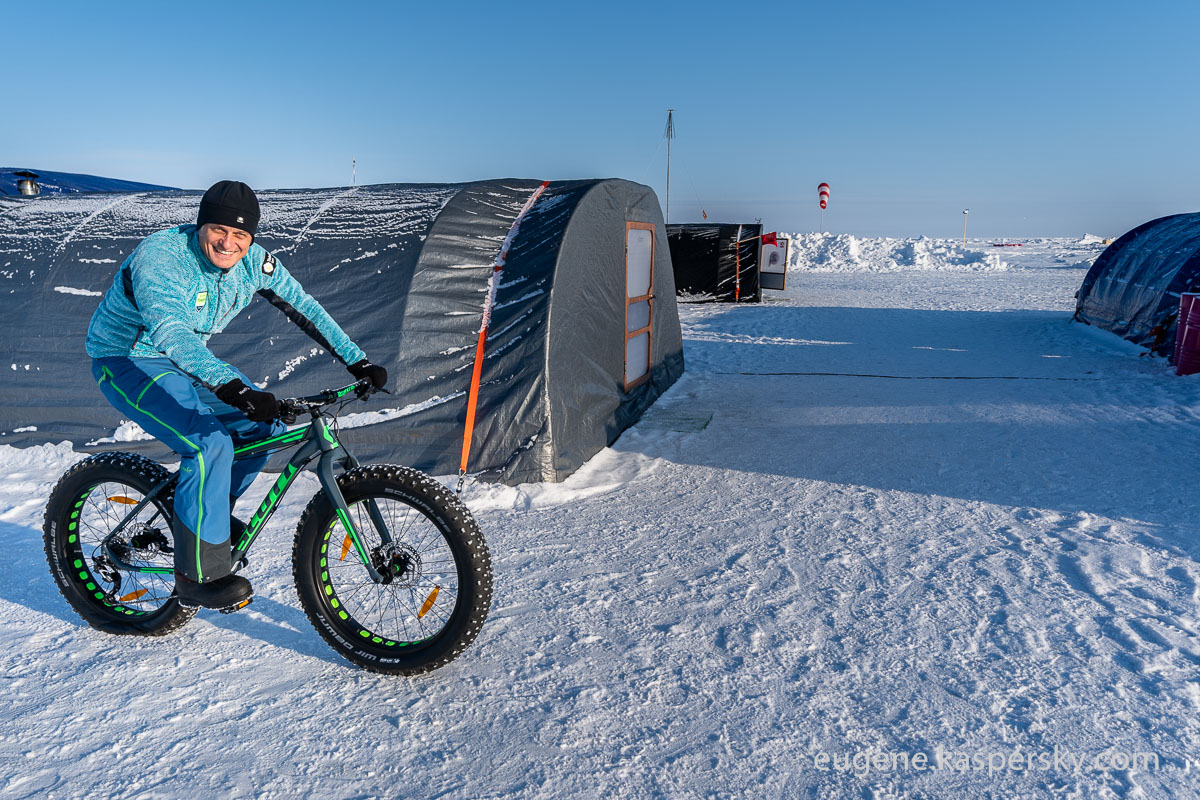 Now for a quick run-down of polar station infrastructure: 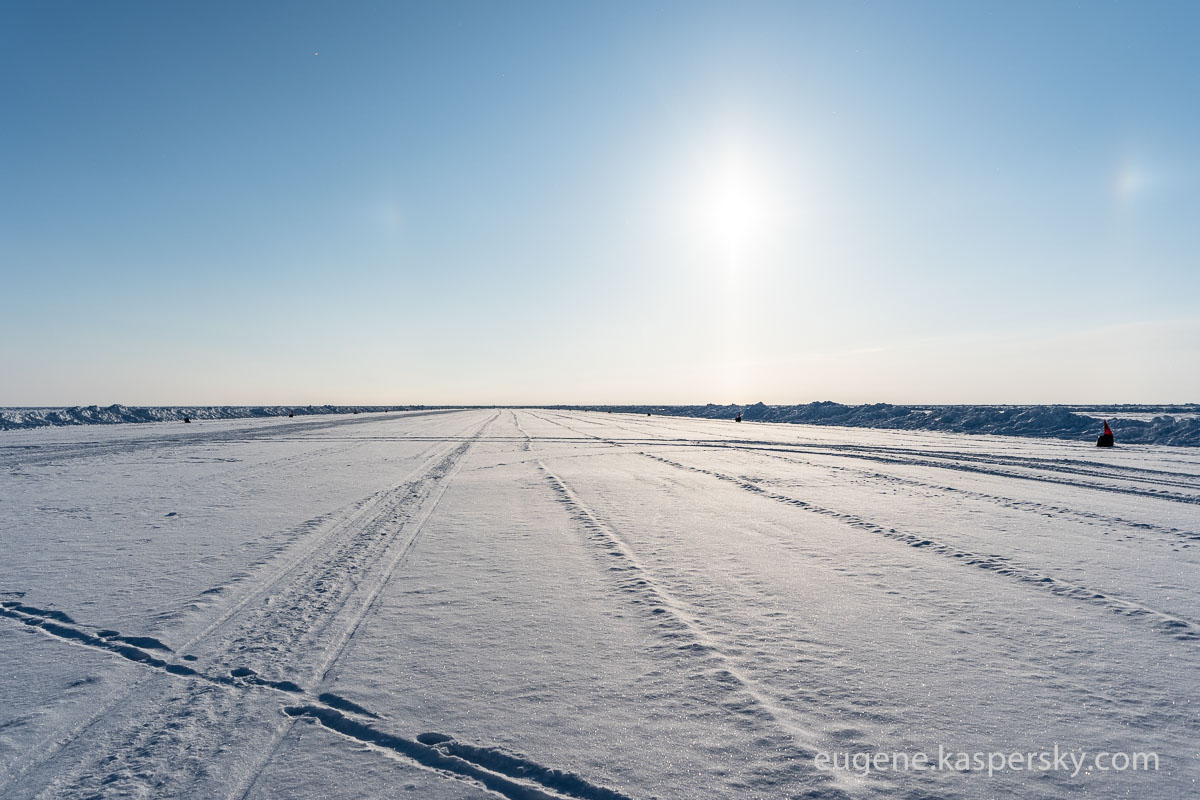 Around 700-800 meters long, with a sprinkling of snow, under which lay two meters of ice and under that four kilometers of water!

Here’s the plane that brought us heading back to Longyearbyen:

Time for a walk along the runway. But wait! What’s this?

Across it – a crack! We were later told how this is normal, so they always find a stretch of ice with room for more snow clearing next to it in case of cracks to make a second runway.

The crack’s more visible from up in the air:

2. Motor vehicles. For clearing snow and carrying cargo here and there.

Parachute! The one that was used to drop the tractor down from the plane! 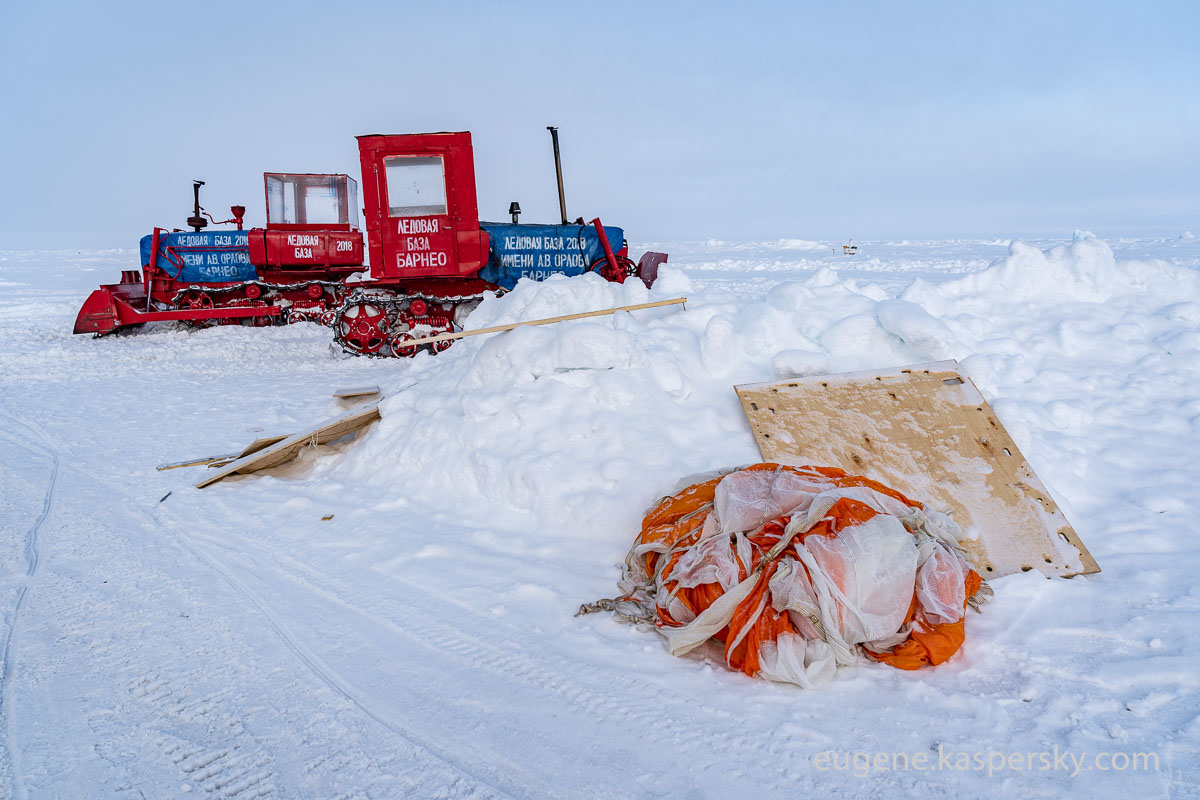 Though Barneo is permanent in that it’s always here up near the North Pole, it’s not permanent as in fixed in one spot all the time. Because northern ice moves about rather speedily, and also because in summer it melts a lot, Barneo is moved around accordingly – to a new, fresh, crack-free spot All that moving around, logistically, goes like this:

First of all an Il-76 flies up and looks for a suitable stretch of ice. It doesn’t land at this stage, and a helicopter can’t fly that far on one tank of fuel. Instead, polar crew and barrels of fuel are parachuted down to a different suitable spot part of the way between Longyearbyen and the planned Barneo spot. Here, a temporary fuel-stop landing area and camp is made for helicopters. Later, the choppers land there. The camp is cleared up, and onward they fly with a full tank of fuel to the new Borneo site. The crew set up New Borneo, and later more polar crew, polar kit, tractors and so on are parachuted down form an Il-76. Kind of like this:

Wow. Quite the procedure. And all on unchartered ice, thousands of kilometers from anywhere in the freezing cold. Respect!

Since daylight is (at this time of year) literally endless, there’s plenty of time for a stroll, including over to a nearby iceberg that’s been frozen into the ice. It probably broke off an iceberg of Greenland and has been pushed around the North Pole a few times by the ocean’s currents: 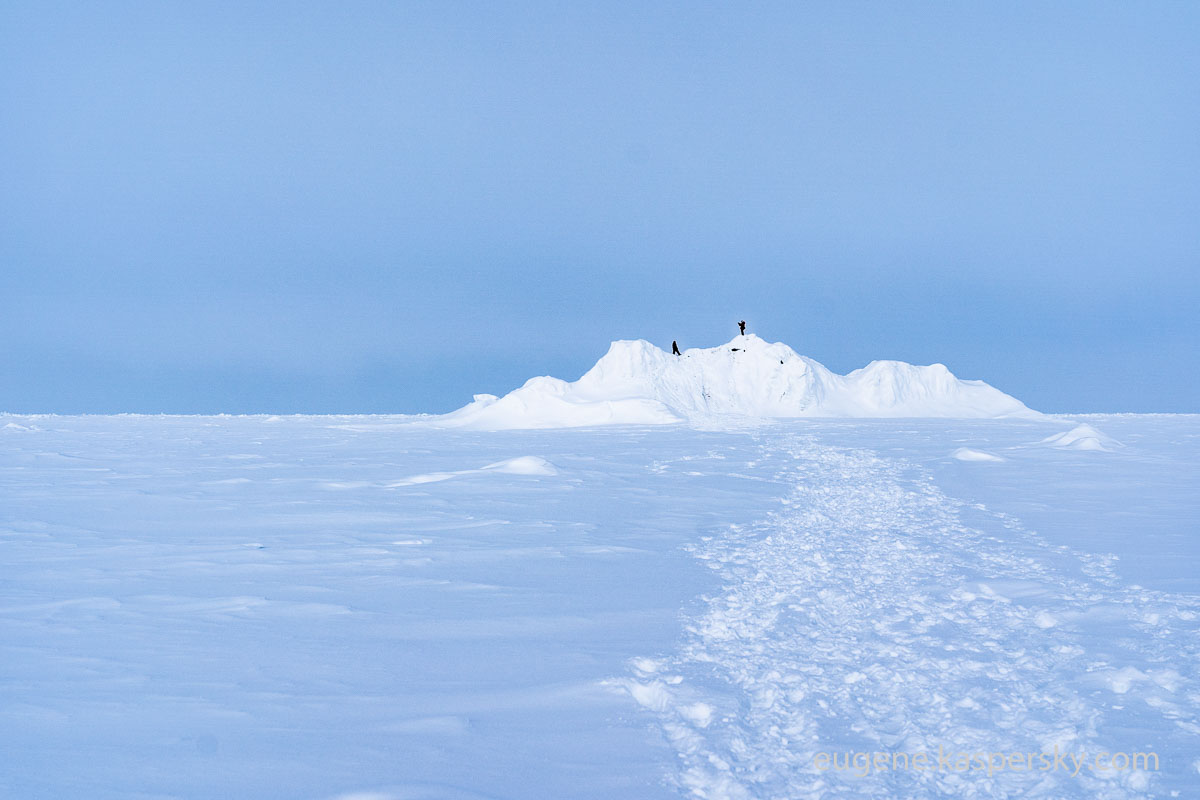 We had to cross quite a few crumpled ice ridges in getting to the iceberg, just as beautiful as the iceberg itself:

Of course, once we reached the iceberg – we, mere children, just had to climb up it!

After our walk, the kind helicopter crew allowed us to have a sit in their sauna! Woah. Big thanks to them. And the plunge pool – probably the most extreme I’ve been in in terms of geography – also in terms of depth: four kilometers!! 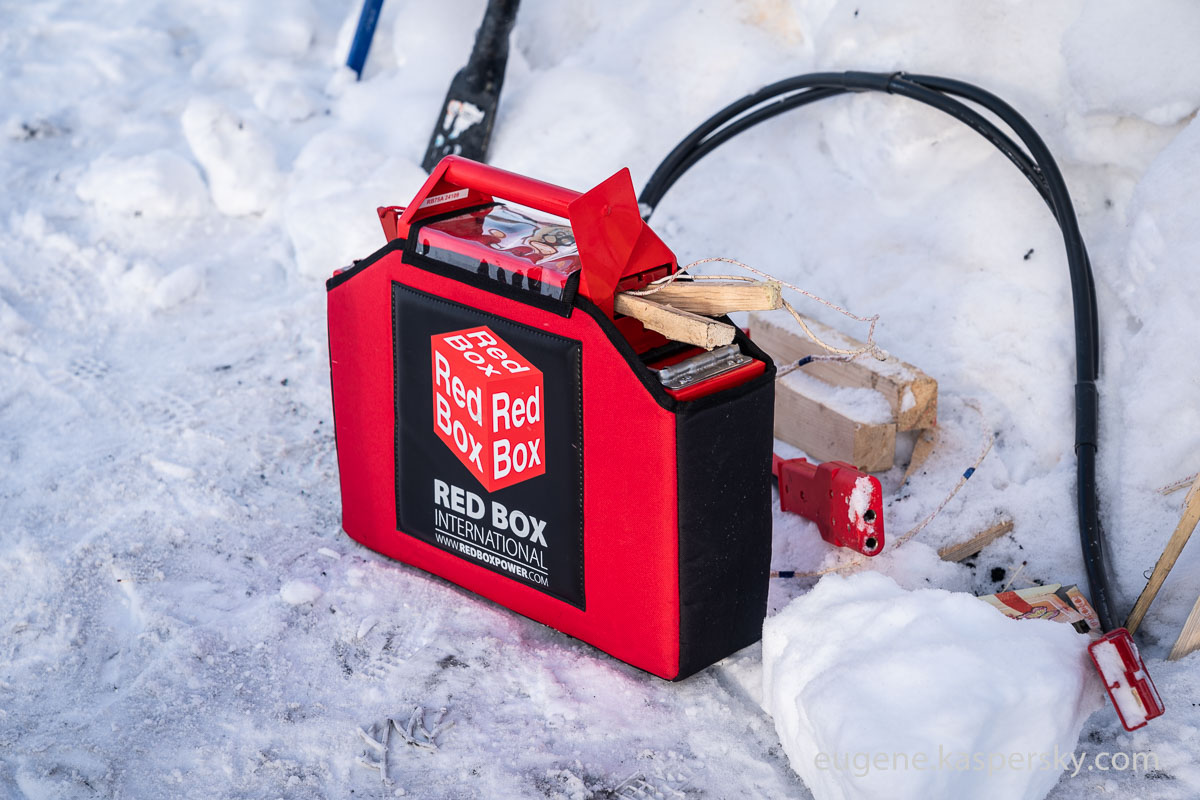 That device only works with those two bits of hi-tech wood carefully inserted! 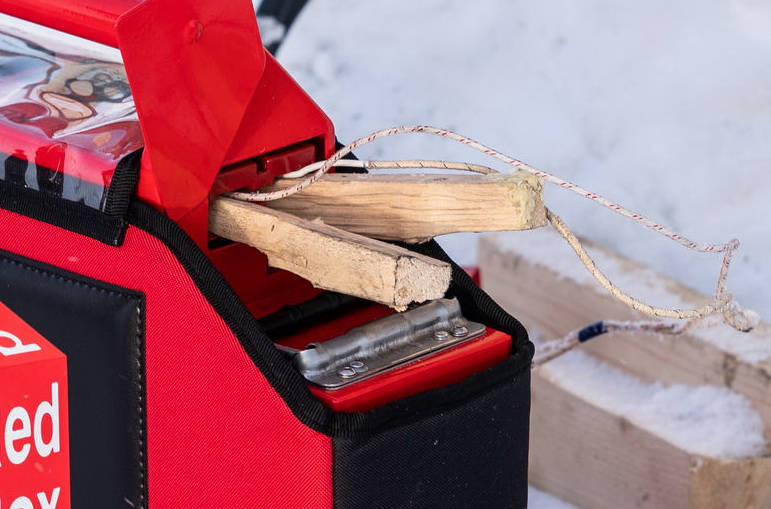 All right folks, that’s it for today. But the main leg – to the Pole itself – is yet to come. More on that though another day.