Saving the world from cyberthreats is our mission, so it’s fair to assume that the cybersafety is the focus of the majority of the content we have promoted on Twitter. That’s actually true – and, being a transparent business, we’re ready to share the overall figures regarding our advertising on Twitter in 2017: 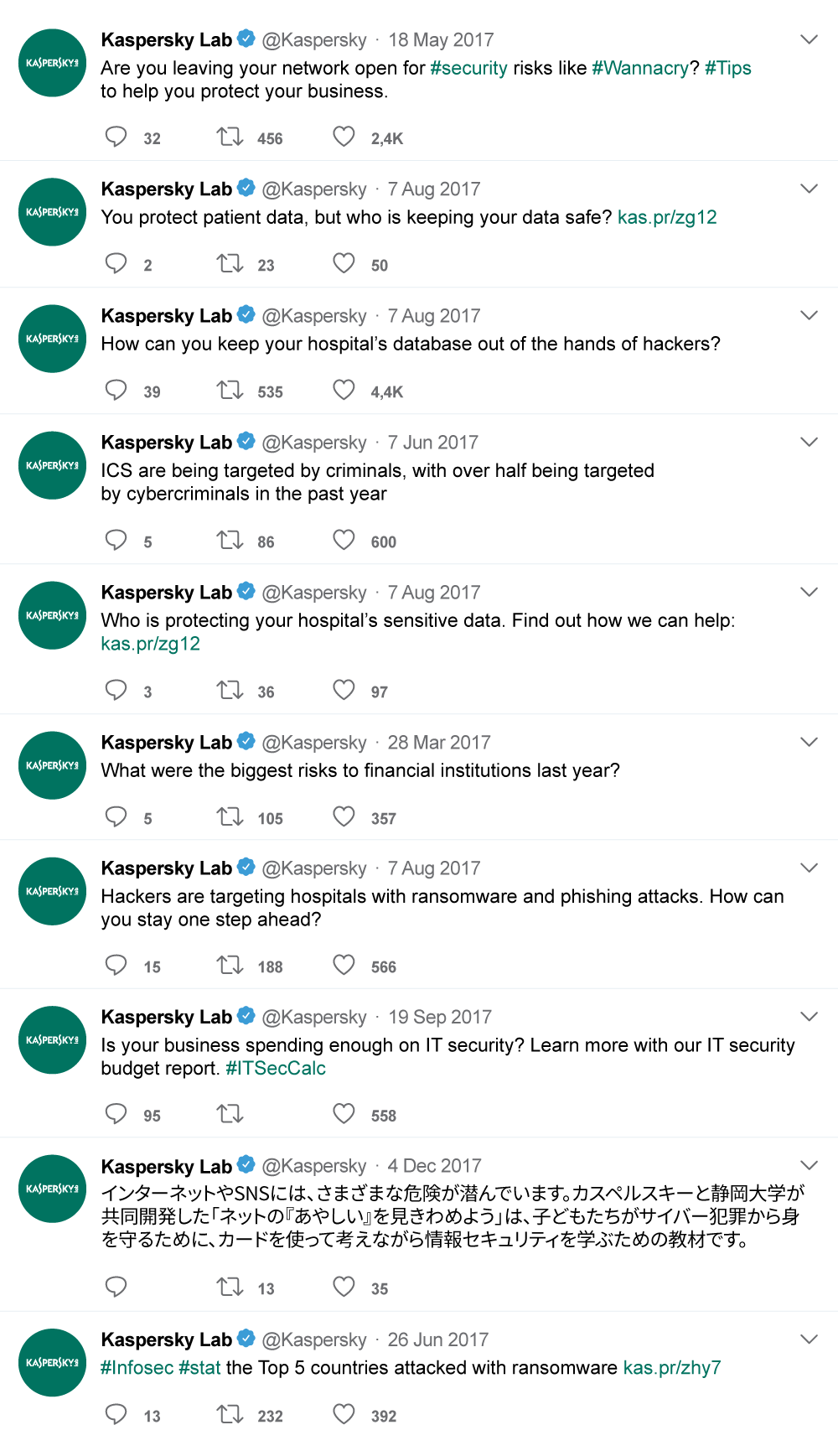 As you can see, our advertising on Twitter doesn’t make up a great deal of our total global spend. However, the most important thing is the content we promote.

Posts about ransomware epidemics and recommendations on how to protect against them; helpful materials on kids’ cyber-safety for teachers; cybersecurity spending benchmarks. There are, of course, some purely marketing things there, but, well, why shouldn’t there be? We sell protection against cyberthreats and that’s it. No violations of Twitter advertising practices!

As I already said, the majority of our promoted content on Twitter has been about cybersafety and research and reports about the information security industry. We believe that this content brings value to a variety of Twitter users, including regular folks who want to read simple tips on how to protect themselves and their families against cyberthreats as well as infosecurity experts who are interested in the technical details of our latest research.

Twitter is playing into the hands of cybercriminals when it hinders us providing users, for example, with timely, potentially important information on protection from cyber-extortionists (case in point: our top promoted tweet was one on the worldwide WannaCry ransomware attack).

“WE BELIEVE IN FREEDOM OF EXPRESSION AND SPEAKING TRUTH TO POWER”

So do we! Or maybe there’s something we’re missing? After all, we at Kaspersky Lab aren’t only rule-abiding (it goes without saying, law-abiding too), we’re also keen on getting to the truth of unfathomable matters, whatever they may be; therefore, we sent your good offices an official letter.

More than two months have passed since then, and the only reply we received from Twitter was the copy of the same boilerplate text. Accordingly, I’m forced to rely on another (less subtle but nevertheless oft and loudly declared) principle of Twitter’s – speaking truth to power – to share details of the matter with interested users and to publicly ask that you, dear Twitter executives, kindly be specific as to the reasoning behind this ban; fully explain the decision to switch off our advertising capability, and to reveal what other cybersecurity companies need to do in order to avoid similar situations. What’s more – within a reasonable timeframe please.

It’s of the utmost importance that all changes on Twitter are divulged in full and applied in a transparent manner.

Understandably, you’ve been busy dealing with public and political pressure. As a response to all this pressure, social media platforms – Twitter in particular – need to somehow adapt their rules and policies. But please, dear Twitter managers, I think it’s of the utmost importance that any and all changes you do introduce in response to existing challenges are divulged in full and applied in a transparent manner.

Don’t take this letter in anger, as I know that Twitter is working hard and going in the right direction. I really like the idea of Twitter’s Advertising Transparency Center, and I’m sure you can guess why. Indeed, staying transparent is, I believe, both necessary and to be encouraged in these turbulent times. As for us, you’d be hard-pressed to find anyone else in the cybersecurity industry more see-through than Kaspersky Lab.

Twitter, if this is a matter of a decision being made in error, please openly admit this; people’d forgive you – everyone makes mistakes! I think that would be the only civilized way to quash any doubts about potential political censorship on Twitter.

If, in addition to cybersecurity, we also have to fight unjustifiable acts akin to censorship – so be it.

Some readers might want to know why we want to air these matters publicly. Here’s why:

First: We want to set a precedent. Other platforms could follow Twitter’s example, while on our side other apolitical IT security companies may also be targeted with groundless, false accusations in certain U.S. media outlets. You’re only shooting yourself in the foot when you cater to the geopolitical noise and start refusing to promote material on false pretenses – contrary to the interests of your own business (how else can we describe not accepting money from clients that run ethical businesses?).

Second: principle. When we see injustice – we fight it. And we’re no longer a David up against a Goliath. We take on and beat powerful patent trolls. We fight monopolies and win. We fight the unfairness of lies about us in the media. Scary large-scale difficulties and uneven playing fields – it’s all in a day’s work for Kaspersky Lab.

And if, in addition to cybersecurity, we also have to fight unjustifiable acts akin to censorship – so be it.

By the way, if you think we’re doing this simply to get our advertising back – you’re wrong. There are many other ways to get information to interested parties. Which got me thinking…

No matter how this situation develops, we won’t be doing any more advertising on Twitter this year. The whole of the planned Twitter advertising budget for 2018 will instead be donated to the Electronic Frontier Foundation (EFF). They do a lot to fight censorship online.

PS: The worst kind of virus is a lie. And the only antidote to a lie is to maintain the ability to think critically. Common sense hasn’t died, ladies and gents. It just appears to be having a gap year.