What’s a cenote, you ask? A cenote is “a natural pit, or sinkhole, resulting from the collapse of limestone bedrock that exposes groundwater underneath. Especially associated with the Yucatán Peninsula of Mexico, cenotes were sometimes used by the ancient Maya for sacrificial offerings.” – Wikipedia.

Cenotes of the Yucatán Peninsula – gotta love ’em especially. For these aren’t just pretty lakes somewhere deep down below in huge pits (like Ik Kil); these are rivers and pools that are completely underground – invisible from the surface. Yucatán’s climate is well and truly tropical, meaning there’s plenty of rain too; all the same, on the surface there are practically no rivers at all to be seen. Why? Before the limestone bedrock collapses the rivers run underneath it. When a collapse does eventually take place, only then do the rivers show their faces rapids to the world once again after millennia underground.

Btw, you aren’t allowed to take camera/video equipment into the cenotes; accordingly, none of the pics here are mine.

Here are a few pics I found on the net: oh my grotto!…

This particular cenote is called Rio Secreto (but it can’t be that secret any more as I included it in my Top-100 Must-See Places in the World (South American sub-list)!). It’s around 80km to the south of Cancun, where I happened to be last week. Apparently it was discovered by chance by a local in the middle of the 2000s. Not long after its discovery speleologists went in to look around this new find. Thoroughly stunned by its endless labyrinth corridors and tunnels, they decided to kit it out with cool lighting and other stuff to make it tourist-friendly. Not a bad idea. By 2008 the first tourists came for excursions – incidentally including me. I was so awe-struck by the place I’ve been back since twice, in 2011 and 2012. I’d go again, too ).

Tourists are taken along several underground routes here. If you’re lucky you get to tunnels with seashell fossils visible on the roofs thereof. Yep: those roofs (made out of sandstone sedimentary rock) were once the seabed millions of years ago (the cenotes themselves are around 2.5 million years old.

Bats like the roofs as much as the tourists: 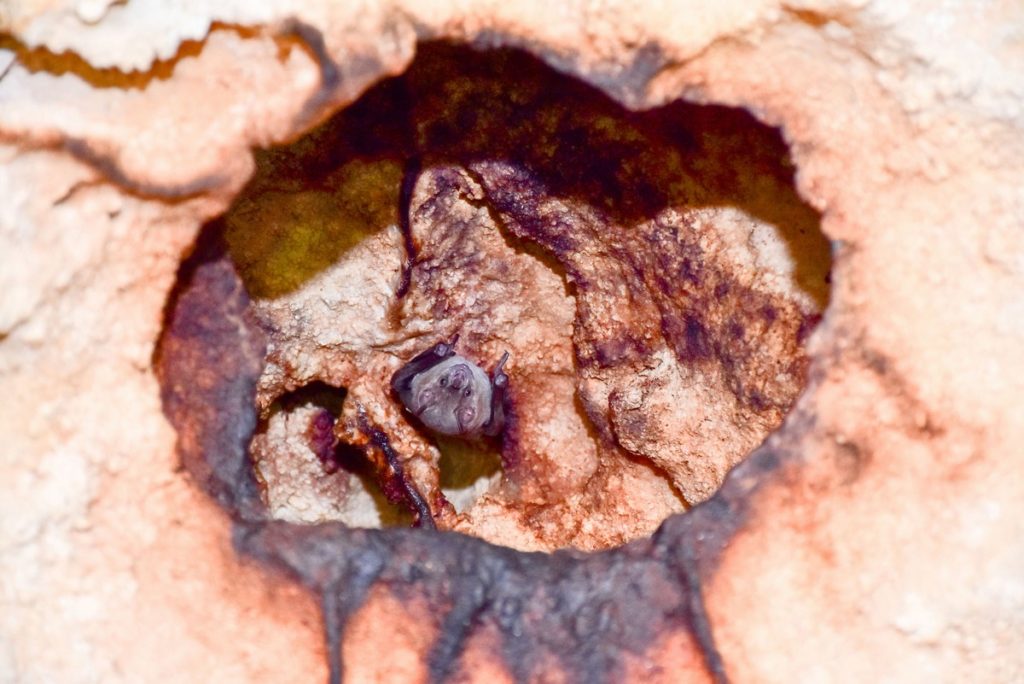 We covered 500-700 meters on our excursion of the underground labyrinth, which lasted about an hour-and-a-half. In places there was solid ground under foot; others – we were up to our knees or waists in water; still others: swimming. The water incidentally is the cleanest you could wish for; a little cool, but still thoroughly comfortable: you don’t want to get out…

One of our group at one point uttered: “I looked back and saw coal miners swimming after me!” 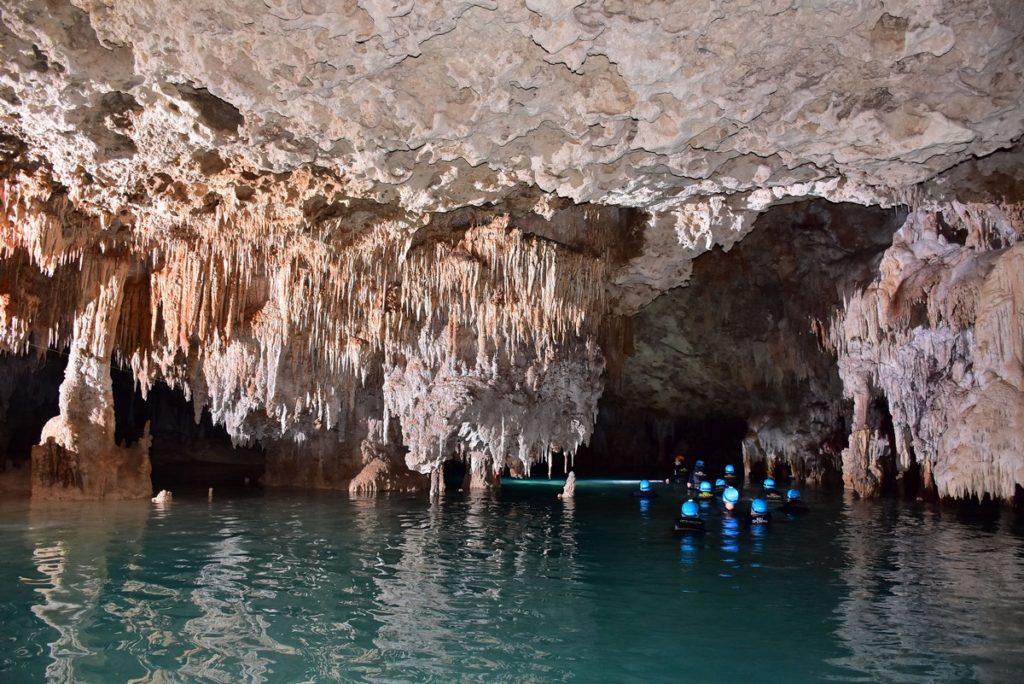 In all around 35km (!) of tunnels, caves and other undergroundnesses have been explored and studied, and I expect in the future there’ll be more routes added.

Btw, we were told how those 35 kilometers of undergroundnesses are only those in the first tier of the caves. There’s a second, lower level, which leads out to the sea. But it’s only accessible to professional divers and speleologists.

Btw II: the speleologists who first navigated the cenotes found the remains of ancient human skulls and bones! Kind of dents the statement that the cenotes were ‘discovered’ in the mid-2000s. ‘Rediscovered’ I think would be more accurate.

30km to the south of Rio Secreto there are more underground caves, called Cenote Santa Cruz. Will have to check those out next time. Surely visiting one and the same natural tourist attraction a full FIVE times is a little excessive, no?

That’s all for today folks. Ciao!…