Today’s post is from Munich; specifically – from one of its fine museums, and then from a conference I was speaking at…

All righty. The museum: the Deutsches Museum, the world’s largest science and technology museum!

How can I best describe it? Ok, how about this:

Imagine you’re in a market – a massive one. There are rows of stalls selling fruit and vegetables, eggs, nuts, knick-knacks… whatever. Well, here – it’s just like that, only the stalls feature cars, planes, computers and all sorts of other tech, from the ancient to the modern-day – lots of it too: 28,000 exhibits! Oh my grandiose!

We were told you need two full days to do this place justice. Yeah right. We had an hour-and-a-half! So this post I guess will be far from complete as a resource to gauge the museum as must-visit or not. Still, I do think it will be a good introduction to the place – one which might entice readers to head to Munich one day not only for its Oktoberfest :).

Note: this commentary won’t be ordered in descending degree of awesomeness. It’s ordered as it happened – as per the sequence of the pics I took…

First up, none other than the one and only SM U-1 U-boat, which is more than a century old! The original Das Boot grandfather! And you can even touch it! Doesn’t really compare with today’s submarines, but harking back to the first decade of the last century – this is pure oh my Germaniawerft!

Now this… – you won’t believe what this is:

It’s a tide-predicting machine! Have a read of that information. Ingenious!

Next up – the music hall…

So what’s this lad up to waving his arms around like that? 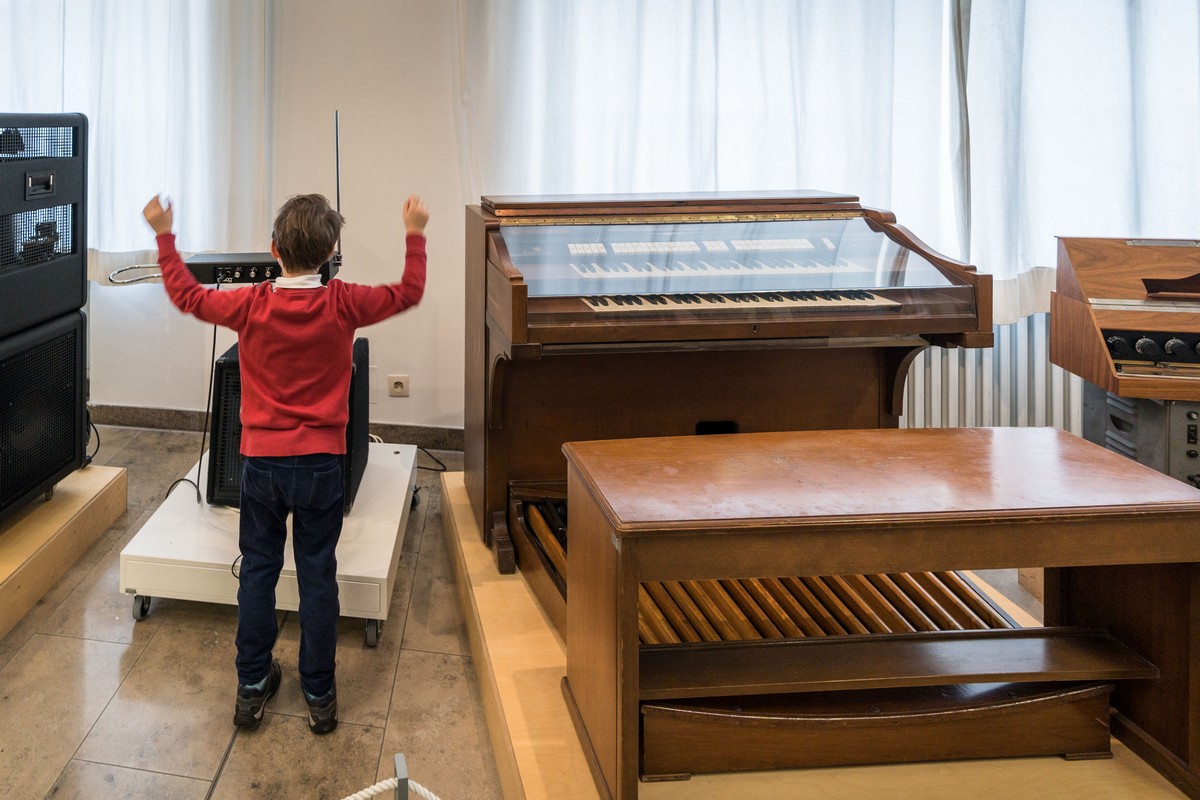 Well, that device in front of him is, arguably, the first ever synthesizer. So, from the 1970s, maybe 1960s, right? Wrong! It was invented in 1919 – in the Soviet Union! It’s called a Theremin. It’s an electronic musical instrument that’s controlled without physical contact, but by the movements of the person – thereminist – playing it, like this boy here. Oh my gobsmacked!

Another exhibit in the music hall that stood out for me was this here contraption. It was used on trans-Atlantic voyages on passenger liners before the Atlantic could be crossed by airplanes.

If you look closely, you’ll see it’s a piano with three… violins built into it! You might think the piano is played and the violins play along. No. The piano plays itself – as do the violins! Check out the video:

To produce music it’s wound up and then mechanically interprets a ribbon with holes punched in it. Ingenious once again!

You’ve heard of the Big Bang, right? Well, this is an old device that helped prove the existence of cosmic microwave background radiation, which in turn proved the theory of the Big Bang.

Onward we march into the next hall…

And here’s the highlight of our expedited excursion. I’ve been wanting a look and feel of this device for years. To write a program on it – that would be just unreal. I wonder – is it possible?

Briefly, a short history of computers:

0. Computer. A very long time ago in England, being a ‘computer’ was a profession: the computer would calculate navigation, taxes, population, and other figures of disputable usefulness, with the help of an abacus.

// Whoah: the abacus was invented in the Russian Empire!

0+. Babbage. This chappy invented the first digital programmable computer – a mechanical one (called the Analytical Engine)! Btw, not long after Babbage developed his Analytical Engine, along came (arguably) the first ever computer programmer the world had seen, who developed an algorithm for it. This programmer was Ada Lovelace, Lord Byron’s only legitimate daughter. But I digress…

1. The first ever electrical calculator.

I’m not a big fan of taking pics with me in them, which shout ‘I was here, aren’t I wonderful’, etc.; however, I just had to make an exception to that rule on this occasion. So here I am, stood in front of… none other than the first ever electro-digital calculator of bits and bytes using a program computer! 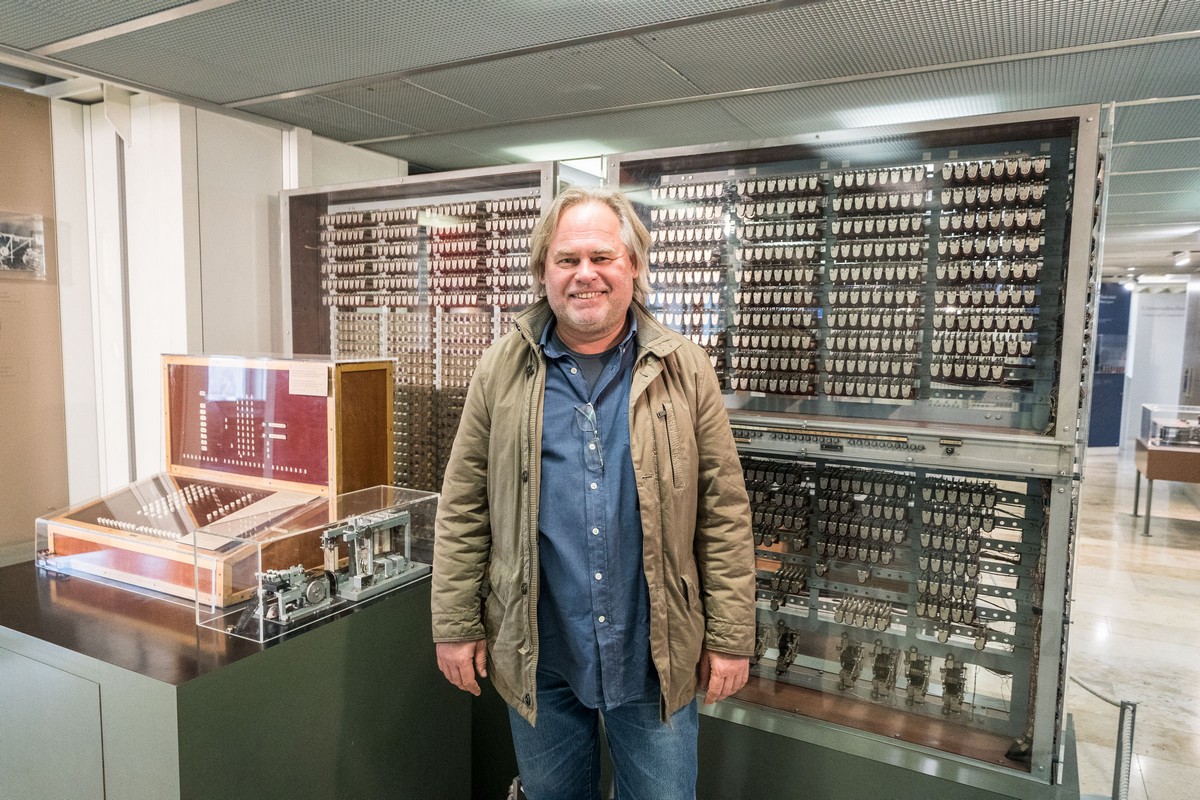 What controls that keyboard in front of you and that smartphone in your pocket, what shows you the news, what takes a picture of your car while driving at night, what navigates that car – also ships, trains, planes and space shuttles, what controls electricity, what controls your house’s water supply, what controls molten metal being poured at a steel plant, what controls your salary being transferred to your account. So what is the what, folks? I’ll give you one guess. Ok Sherlock, you guessed it; well this is the world’s first.

Its inventor was Konrad Zuse, and his story is quite remarkable. I quote Wikipedia:

Born in Berlin, Germany, on 22 June 1910, he moved with his family in 1912 to East Prussian Braunsberg (now Braniewo in Poland), where his father was a postal clerk. Zuse attended the Collegium Hosianum in Braunsberg. In 1923, the family moved to Hoyerswerda, where he passed his Abitur in 1928, qualifying him to enter university.

He enrolled in the Technische Hochschule Berlin (now Technical University of Berlin) and explored both engineering and architecture, but found them boring. Zuse then pursued civil engineering, graduating in 1935. For a time, he worked for the Ford Motor Company, using his considerable artistic skills in the design of advertisements. He started work as a design engineer at the Henschel aircraft factory in Schönefeld near Berlin. This required the performance of many routine calculations by hand, which he found mind-numbingly boring, leading him to dream of doing them by machine.

Beginning in 1935 he experimented in the construction of computers in his parents’ flat on Wrangelstraße 38, moving with them into their new flat on Methfesselstraße 10, the street leading up the Kreuzberg, Berlin. Working in his parents’ apartment in 1936, his first attempt, called the Z1, was a floating point binary [he preferred the decimal numeral system to the binary one] mechanical calculator with limited programmability, reading instructions from a perforated 35 mm film. In 1937, Zuse submitted two patents that anticipated a von Neumann architecture. He finished the Z1 in 1938. The Z1 contained some 30,000 metal parts and never worked well due to insufficient mechanical precision. 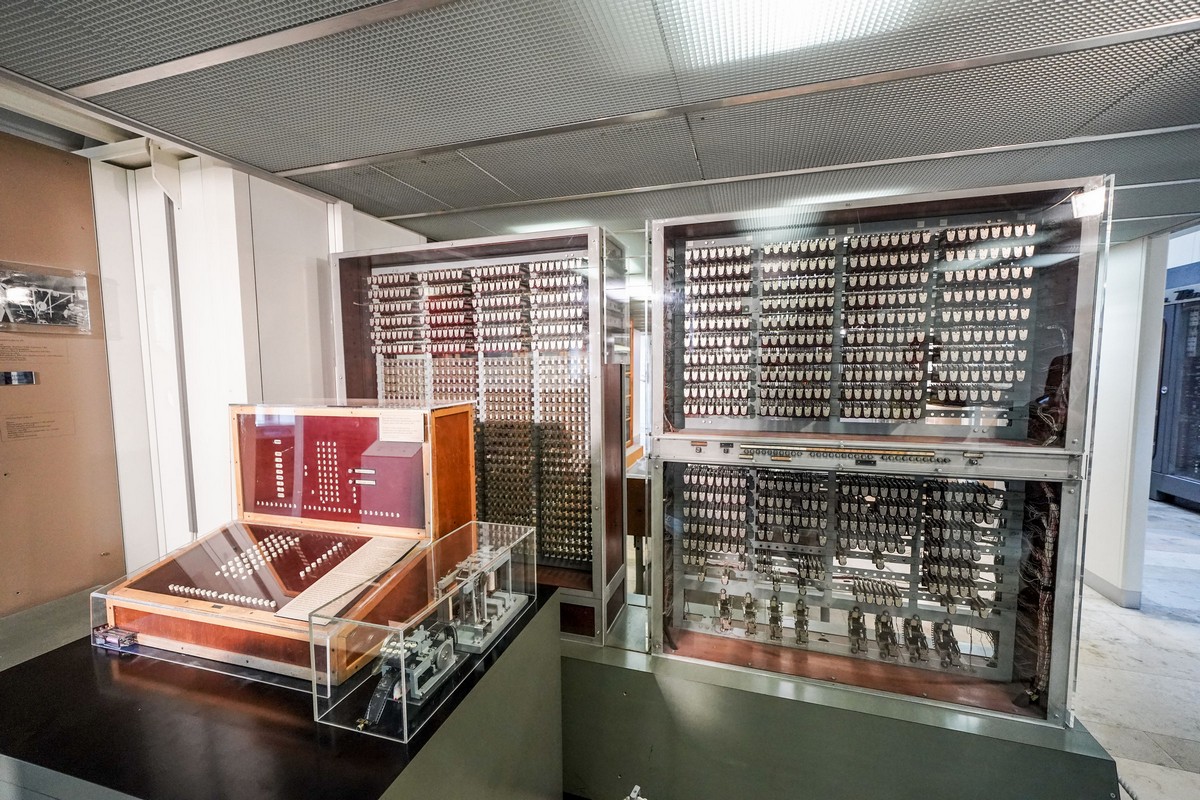 Interesting fact: this machine was invented in the early 1940s, which, in Germany – and many other places – weren’t the best of times for innovation. Here’s an example of that:

In Germany in the early ’40s there was a dire shortage of paper. Germany isn’t the most cellulose country on the planet, and getting paper into the country was difficult then because of the War. Zuse’s innovative spurt could have stopped right there; but no: German ingenuity and efficiency and all that – he made the best of what he could lay his hands on, and that was… – cine film, of which there were no limitations in supply! The bonus: it didn’t rot away like paper – lasting practically forever. 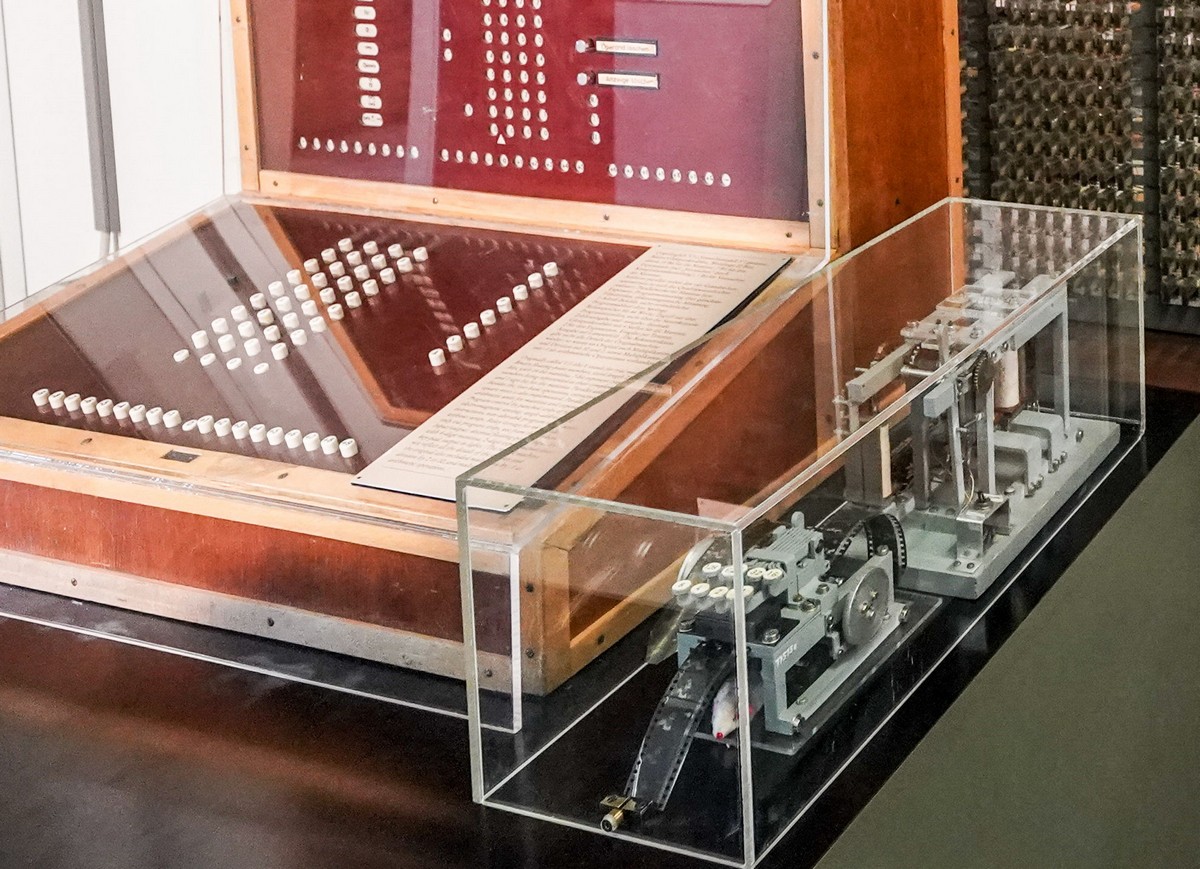 Ok, now for the main course – at least for programmers… 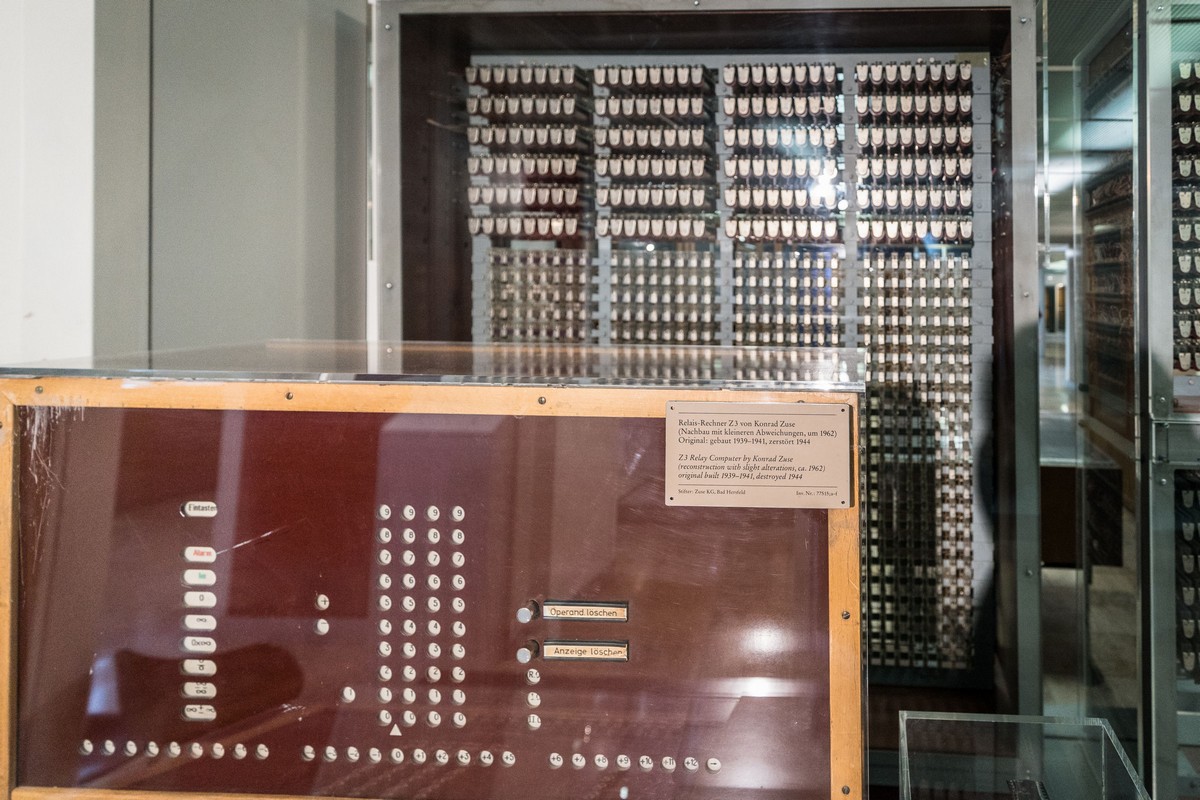 Check out this pic: 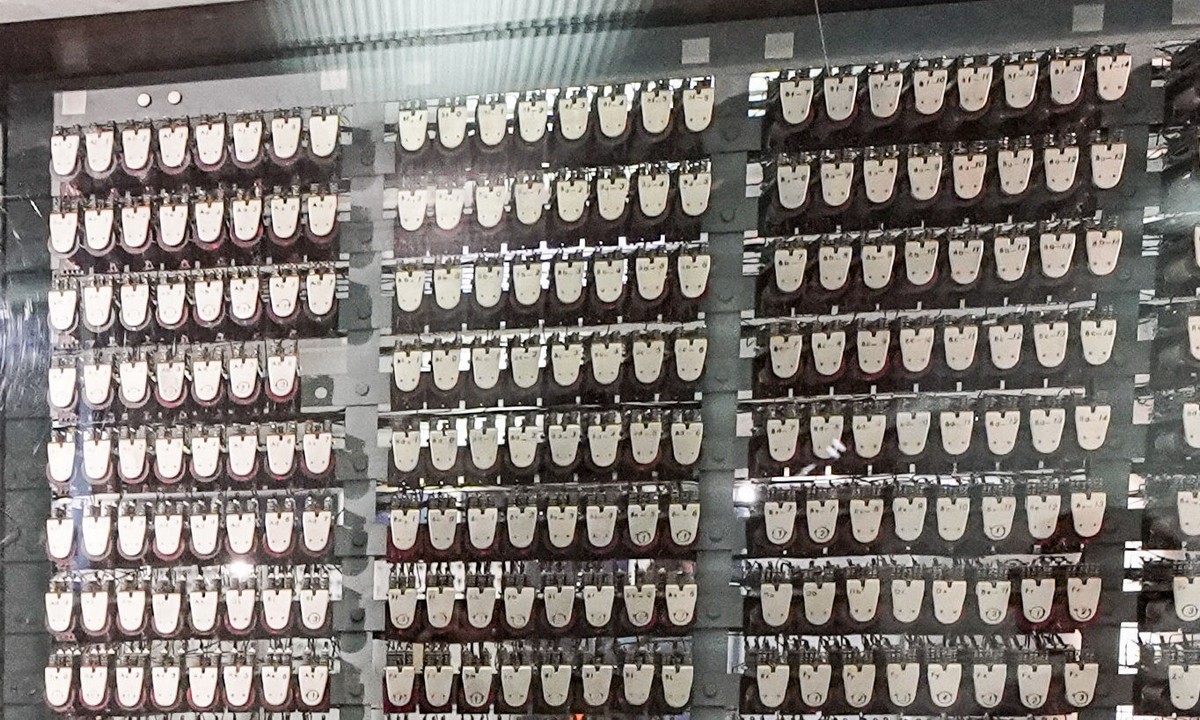 You see those things there that resemble the shaver head thingy on a beard trimmer? Count how many there are in a row.

Well those shaver-head-thingy-resembling things are actually bits, eight of which – as you’ll know – make up one byte! No joke folks. These are the world’s first ever bits and bytes!!!

Of course, compared to a super-computer of today – even the one in your cellphone – this all looks extraordinarily primitive; back then it was the cutting edge of computing! Anyway, Konrad made a few more of these computers, and soon enough word got round the world about this computing pioneer in Berlin. Officials from universities would come to him to ask to buy his avant-garde kit, but Konrad refused to sell them anything. He preferred to rent out his digital devices instead. Woah: computer as a service! Which just goes to show – not only was he a technical genius way ahead of his time, he was also a business wunder-mensch too!

You’ve heard of Enigma machines, right? No? Read that Wikipedia page if you like tech history that shaped human history. Yes? Check this out – an original Die Enigma – right here in the cryptography hall! Oh my gamma rotor!

Anything after seeing an Enigma would have been an anti-climax, but this museum really does try its best to stem the comedown: next up for us – the aviation hall… 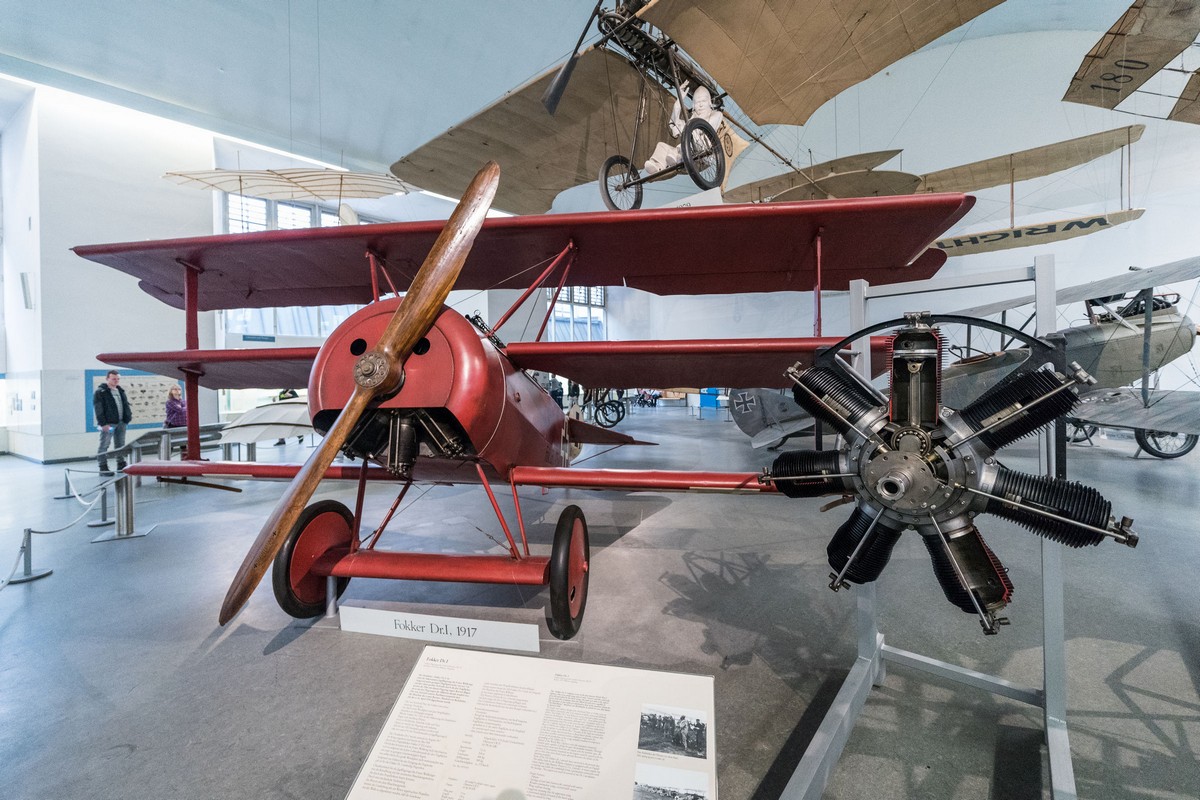 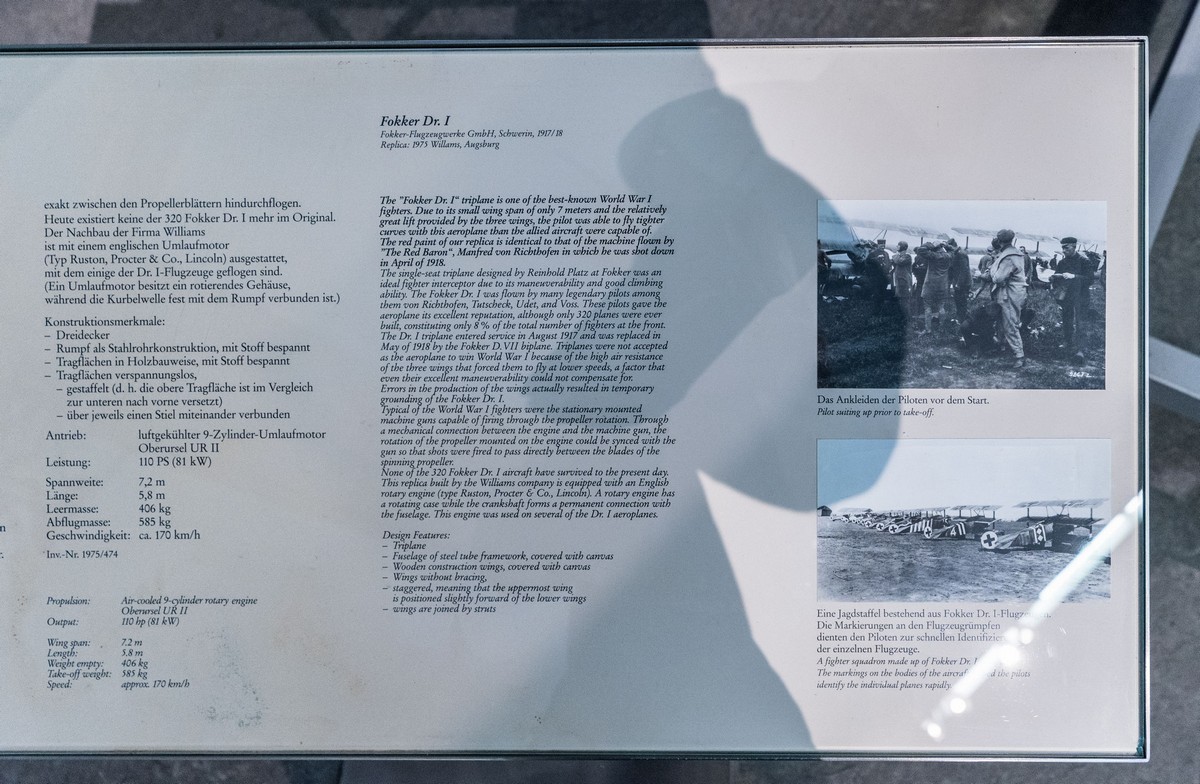 Remember the story of the Wright Brothers and the first airplanes? Well, apparently the only surviving aircraft of theirs is here. Like I say, the Deutsches Museum really is unbelievably high-caliber!

We head to the last hall for us today: that of the Industrial Revolution… 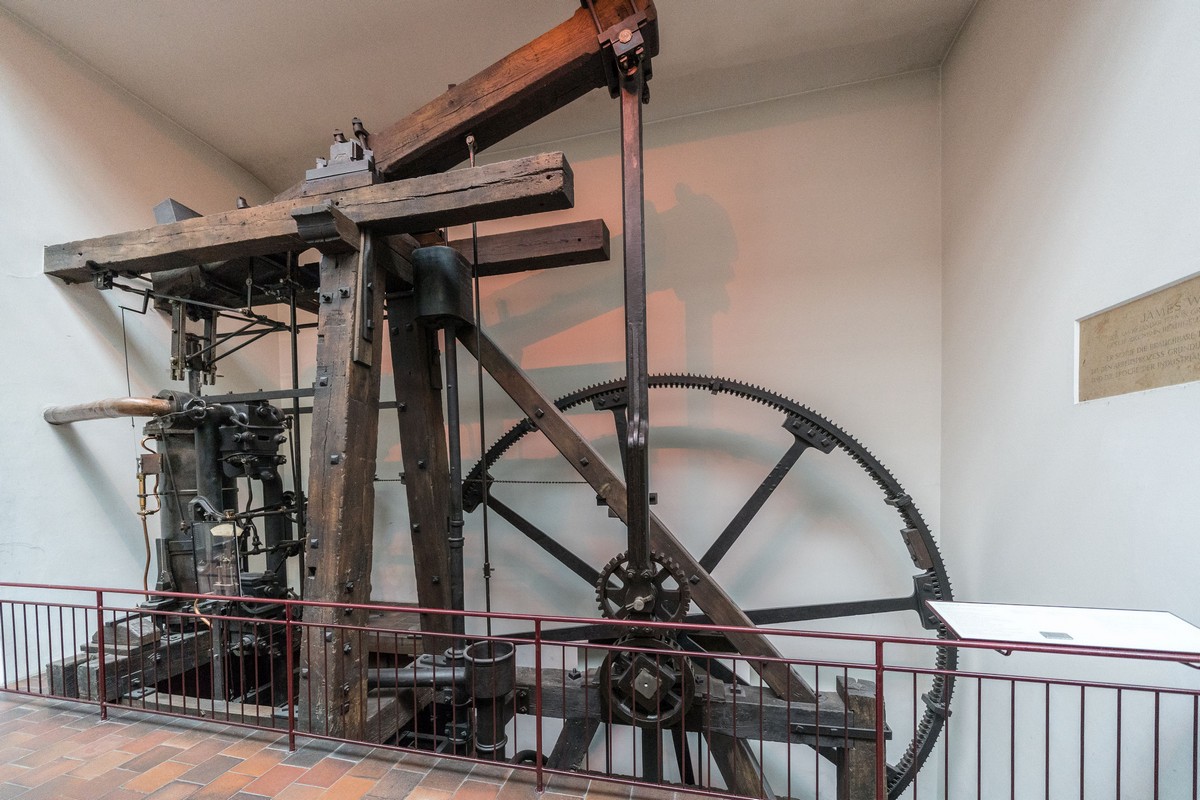 Turns out that in the 1800s the producers of the first ever this, that and the other industrial heavy machinery delivered their new shiny kit to customers (mills, foundries…) for free, and would take a third of the savings made due to the new shiny kit in lieu of up-front payment. Well, well. Business savvy a la Victorian times!

And that was it for us, sadly. But, oh boy: I’ll be back here for sure asap!…

Next up for us was the conference I mentioned. Not just any conference. But the one conference that is so elite-level that all you see on the news for the whole long-weekend while it’s on every year is this or that minister or prime minister – or IT security company CEO! – issuing his/her latest important statement. Yes boys and girls: it’s the Munich Security Conference. And you thought I was here just for the museums?

Since 1962 this has been one of the largest annual conferences on international security policy. Its motto: Peace through Dialog. Nice. Just what I’ve been saying for more than a decade regarding the cyberworld. So I just had to accept when invited there to say it once more!…

I really enjoyed the round table on cybersecurity (sorry: confidential, so no pics). A hundred-or-so folks in the audience, two hours to fill, microphone > off we go. Interesting audience too, including Rob Joyce, former head of the NSA‘s cybersecurity unit, the TAO, and who is now the cybersecurity coordinator for the Trump administration.

I’ll have to stop there regarding the conference: don’t want to violate the confidentiality policy; they wouldn’t invite me back!…