I told you the Novolipetsk Steel Plant is gargantuan, right? So it makes sense my report and pics from a visit thereto wouldn’t fit into just one post. Therefore – you guessed it – herewith, part two!…

All righty. 15 million tons of steel – that’s how much exactly? I mean, so ordinary Homo Sapiens can get their heads round it? Ok – here’s my attempt at quantification for the masses…

Now, you see the bright orange block in the following pic? It calls itself – would you believe it – a slab, and it weighs between 25 and 35 tons. Thus, 15 million tons of steel would be… 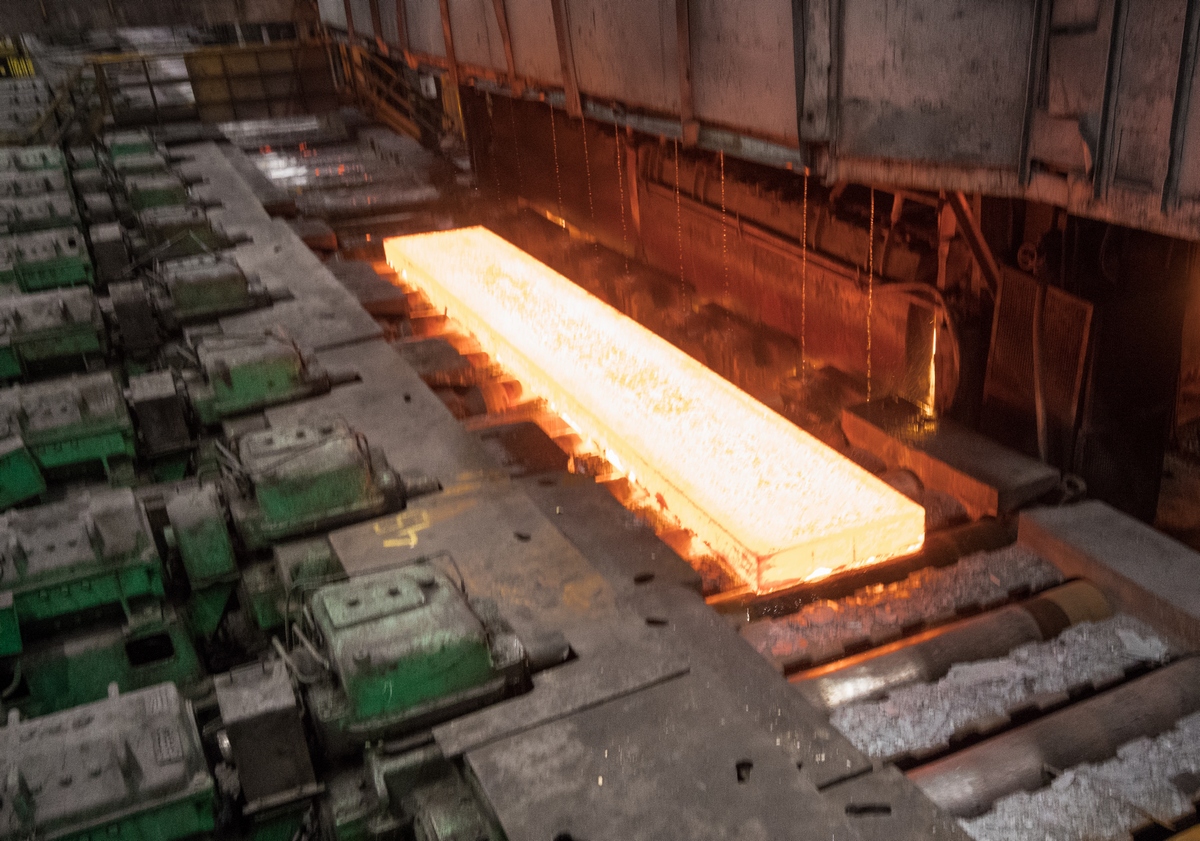 A cube of iron weighs 7.87 tons (steel weighs 7.85; that is, about the same. For present purposes the difference is insignificant). So, 15 million tons will be around 1.9 million cubic meters. And that will be a huge chunk of steel 100 meters across, 100 meters deep, and 200 meters high. And that would be like a 50-story skyscraper made out of solid steel. Or a square cube 125x125x125 meters. You getting a handle on the size now?

Just in case – let’s look at it another way:

1.9 million cubic meters could also be a long square-shaped bar a meter across and a meter high stretching… 1900 kilometers – like from Gibraltar to Paris (by road, not as the crow flies!). 1900 kilometers of steel comes out of the Novolipetsk Steel Plant every year, which works out at… where’s my calculator… 216 meters per hour!

…Let’s try it in railroad freight wagons! If we say one wagon is 15 meters long and holds 70 tons of cargo, a year’s production works out at… 214,000 wagons, i.e., a train stretching 3200 kilometers! At least, that’s what I worked it out as, and I don’t think I made a mistake…

// A digression extraordinaire: all this heavy-metal talk got me thinking: what’s the heaviest metal? The Internet informs that it’s a tie between osmium and iridium. A cubic meter of these weighs three times more than steel, i.e., 22.6 tons! But those two metals are extremely rare. In third place comes the still rare though much less-rare platinum, a cubic meter of which weighs 21.45 tons!

And what about the lightest metal known to man? That’s lithium, which is two times lighter than water! So light it floats on water. I reckon it’d be good for making ships out of :). The most expensive metal: californium; however, it’s not naturally occurring. The most expensive natural metal is rhodium.

…I’m not quite sure, but let’s get back to massiveness.

The plant is the size of a whole neighborhood (or two), with its own transportation system, infrastructure, and endless web of pipes through which various materials get ferried about from workshop to workshop. When I asked if there was anyone at the complex who might understand the whole topology of the complex, the answer was a swift: ‘no!’. Each link in the chain does its own bit, and lets the others do their bit.

Here’s the complex’s bus between bus stops and on time according to the bus timetable. Beats walking the several kilometers from one end of the complex to the other. 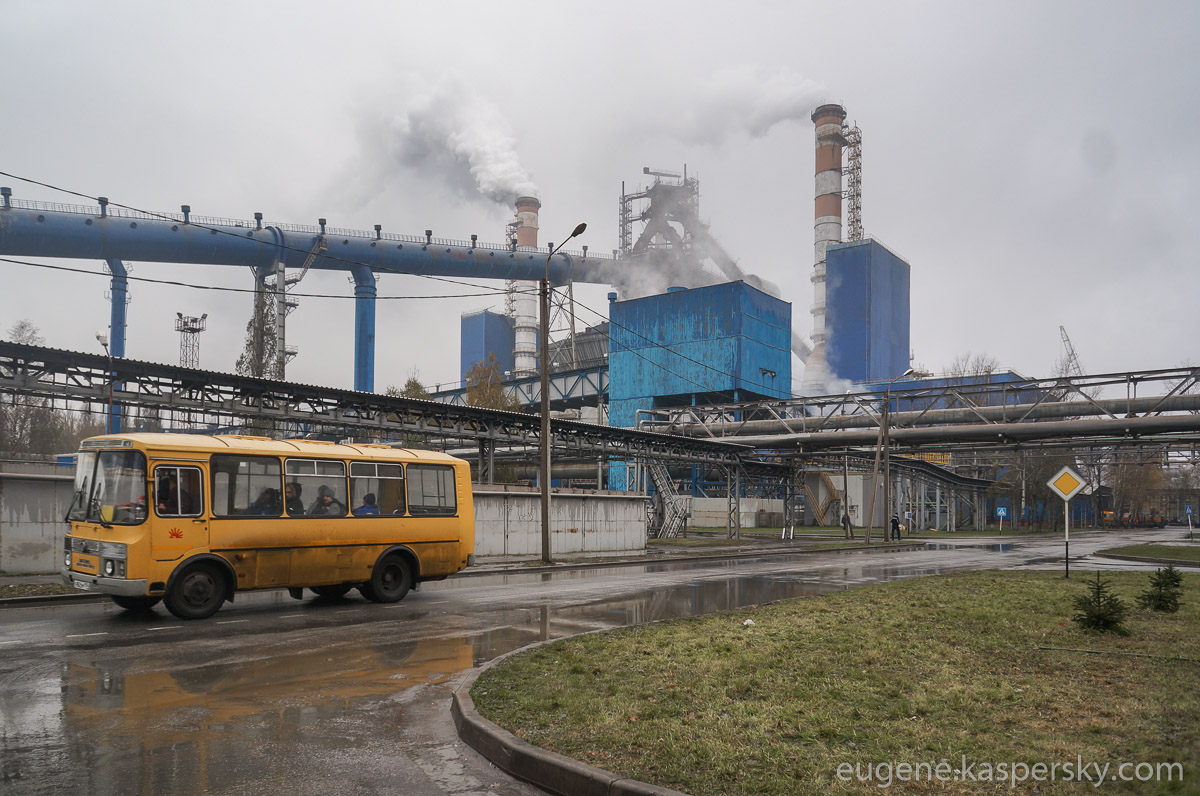 The first part of our excursion covered the Rossiyanka blast furnace, the jewel in the crown here.

Outside the blast furnace the air’s clean and smell-less, as they take ecology very seriously here (more about that in a bit). But inside’s a different matter: the unmistakable ‘aroma’ of heavy iron and steel industry; such an intense ‘bouquet’ – you can almost taste it too. 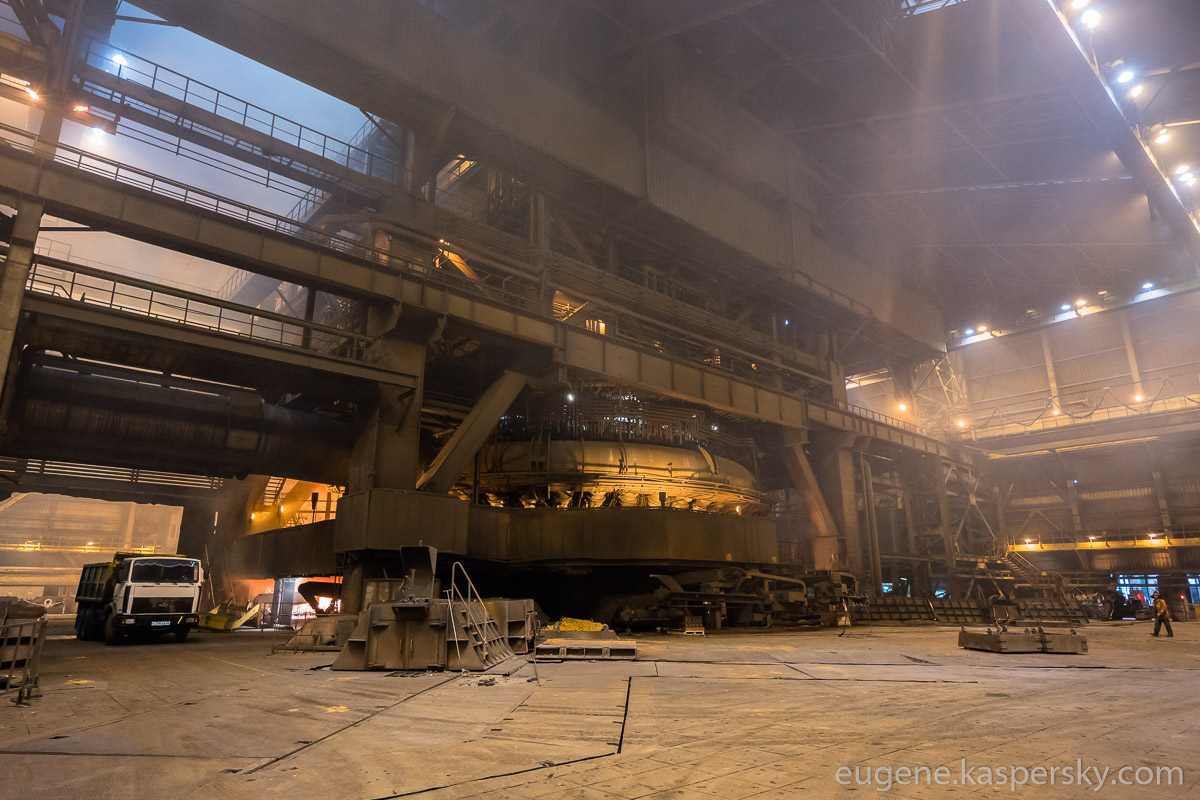 Since the blast furnace is very modern, there’s no chance of getting to see the actual iron production taking place. All dangerous production processes are encased in special housings and controlled remotely from well out of the way. The only process you can see, and then from a distance, is the iron being poured into large basins by the railroad platforms. Then that iron gets driven to another workshop where it’s turned into steel. Clearly industrial control systems play a big part in everything.

And of course, we couldn’t have heavy industrial processes going on non-stop without the inevitable big red button now could we? Here she is: 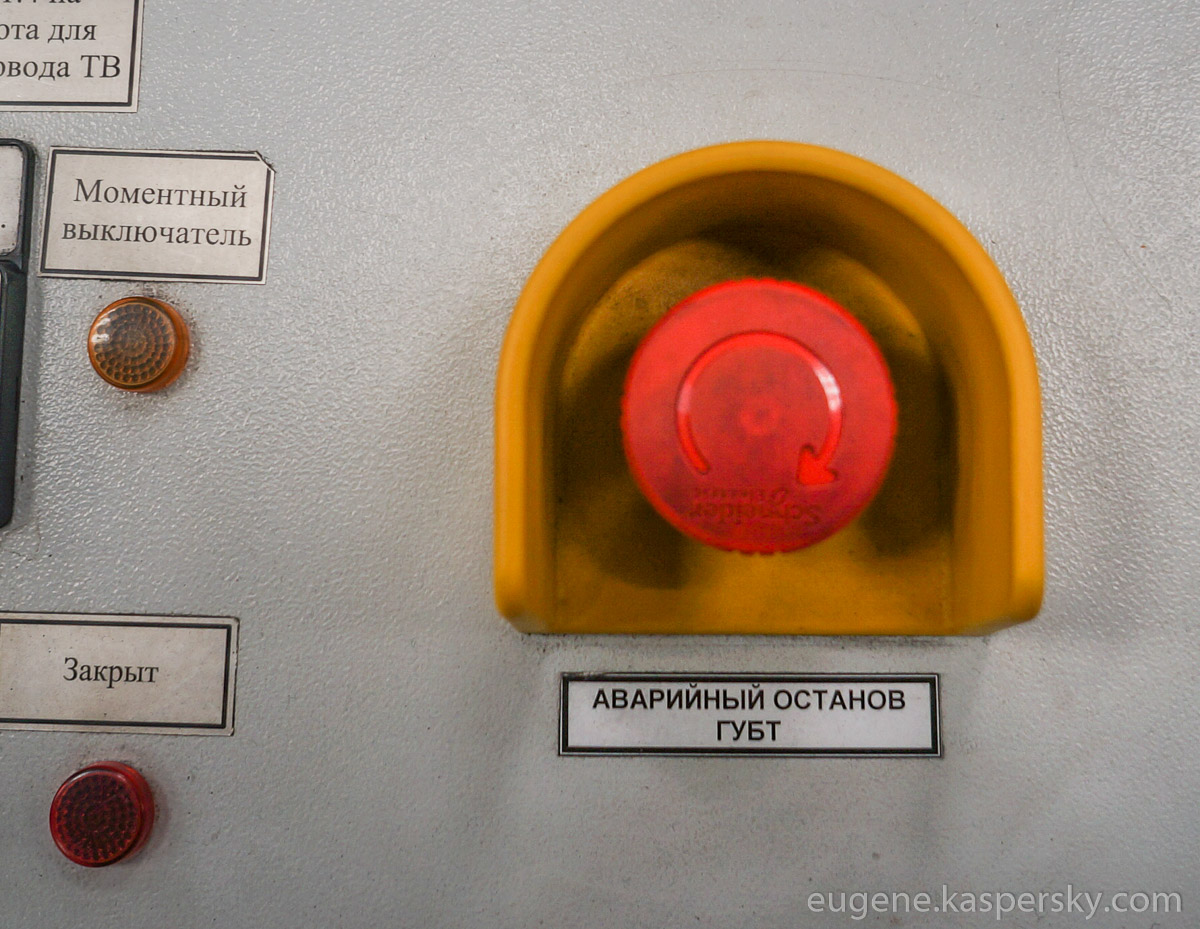 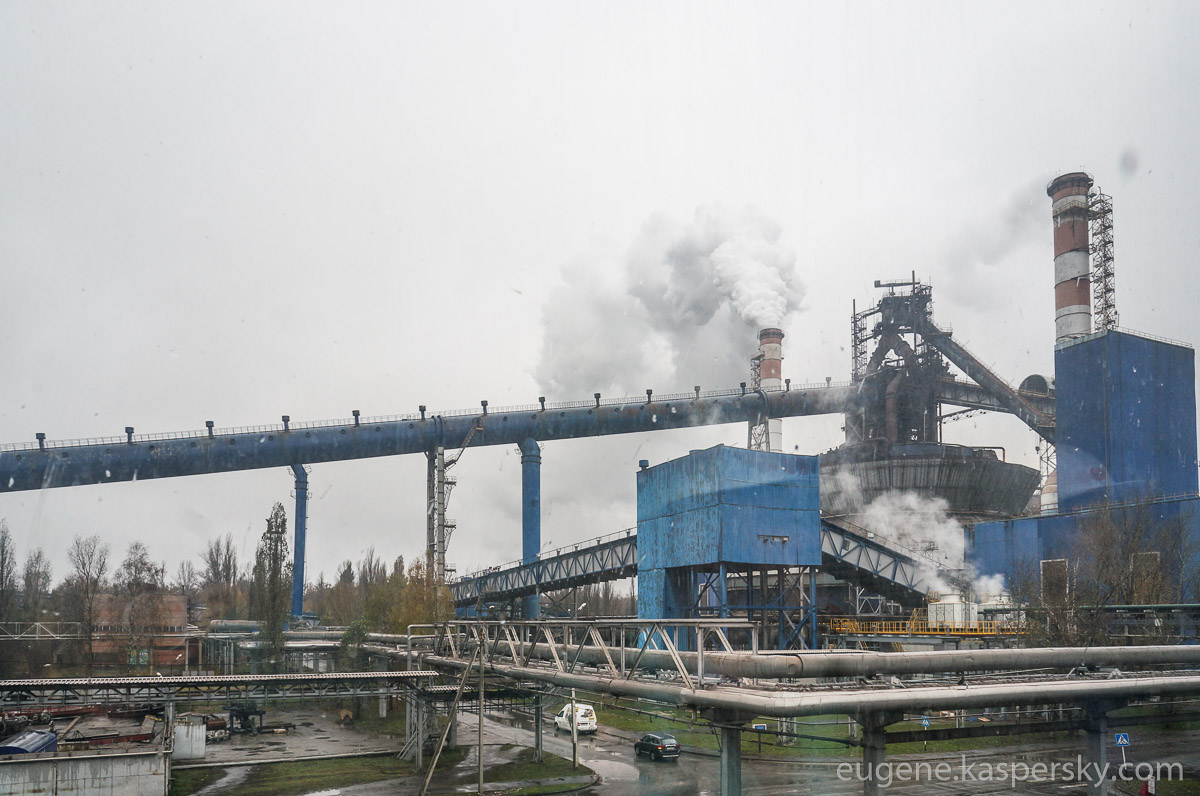 The highlight of our tour was the hot-rolled workshop. Here a constant stream of cooling steel crawls (then sprints!) along a track, which gets cut up into slabs, which in turn get flattened into steel sheets. Here come a lot of photos thereof!…

The temperature of the slabs is around 1000°С. 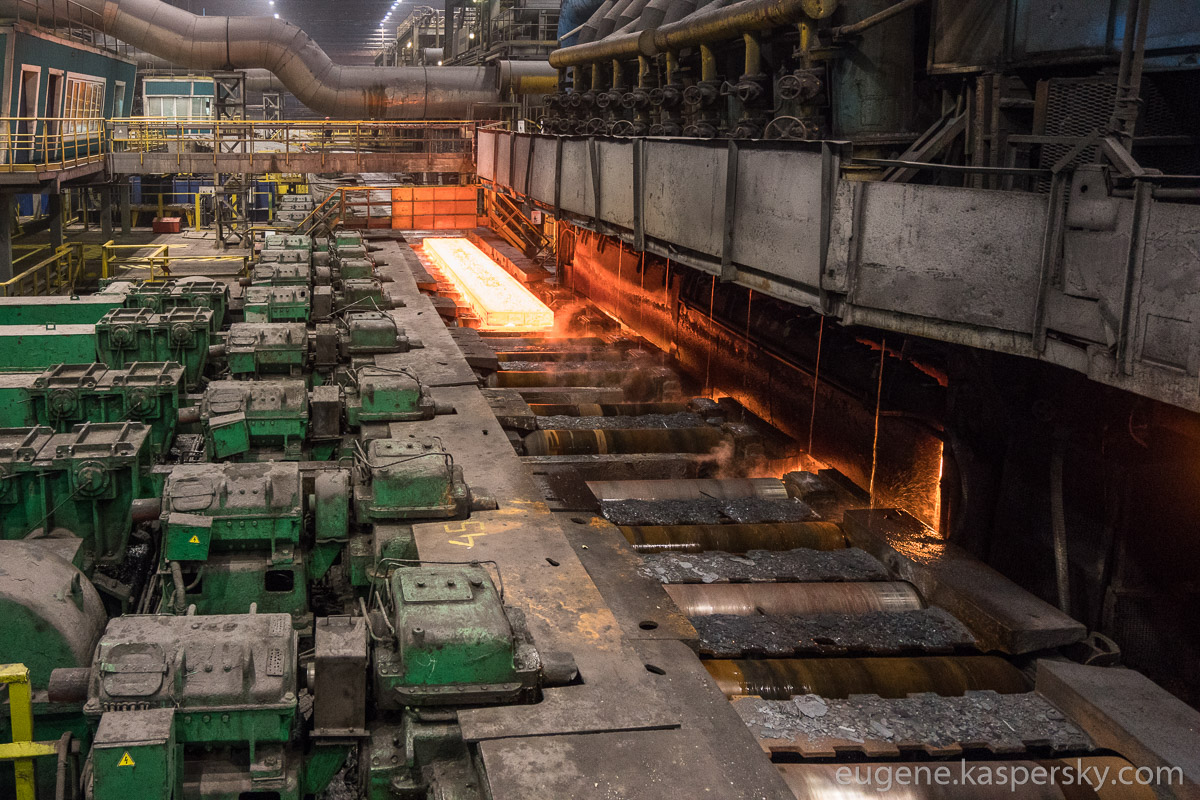 The hot slab travels along its path from one end of the workshop to the other, all the while being put through different presses, cooled, and becoming thinner and thinner… until it’s down to the thickness of thin pastry! Here are two presses:

And here are two… rolling pins:

The reason why the speed is upped the further along the steel gets is that the tons-per-meter needs to stay constant. So, if a slab is flattened out and becomes half the size/weight, it will go twice as fast. Early on the large slabs move very slowly, while towards the end the sheets shoot past at 15 meters a second (as far as I recall from what our guide told us).

Here’s a sheet flying from one press to another! 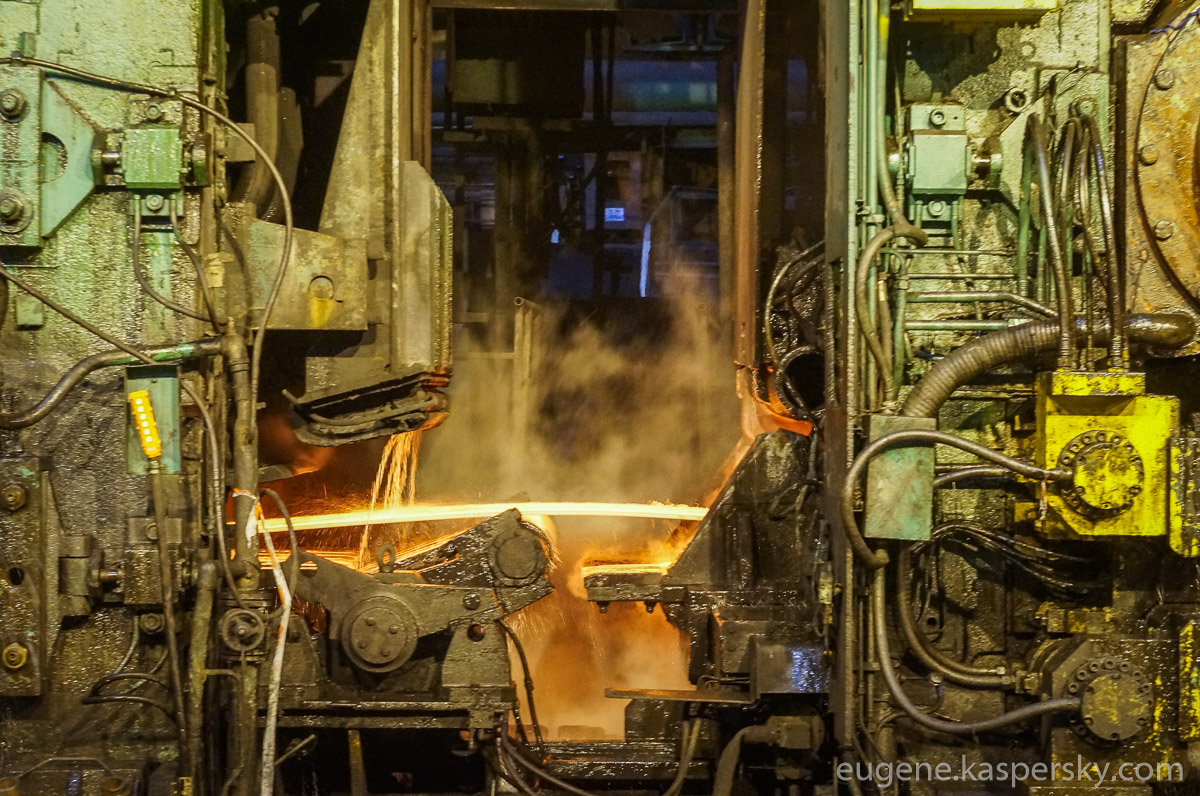 Next – another press, and then it’s cooled with water.

Both workshop and rolling mill are enormous – 1200 and 800 meters in length, respectively.

A slab goes from one end of the 800-meter rolling mill to the other in just under four minutes. 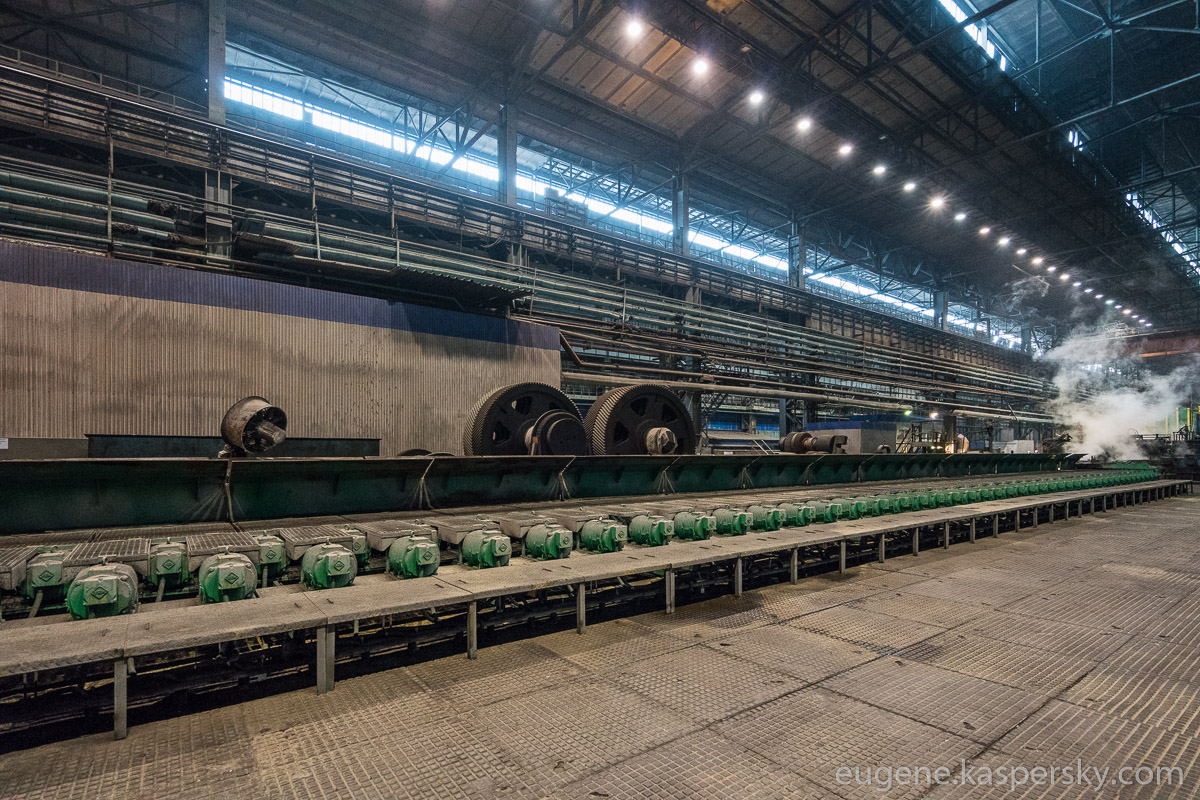 Meanwhile, our excursion continues. We listen carefully to our guide while trying to memorize facts and figures, all the time snapping away merrily.

The end of the rolling mill.

Here the thin ‘pastry’ is rolled up: 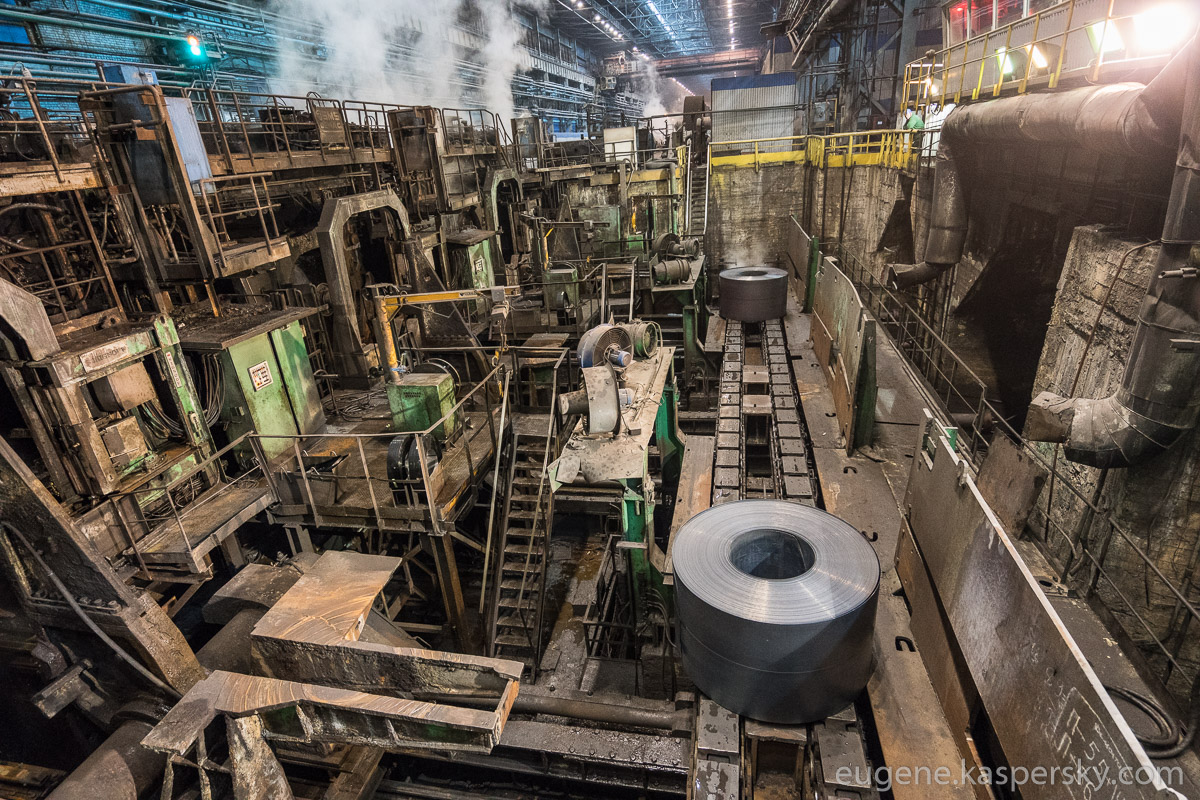 The weight of a roll is between 25 and 36 tons, depending on a particular order. The length of a roll – nearly two kilometers. 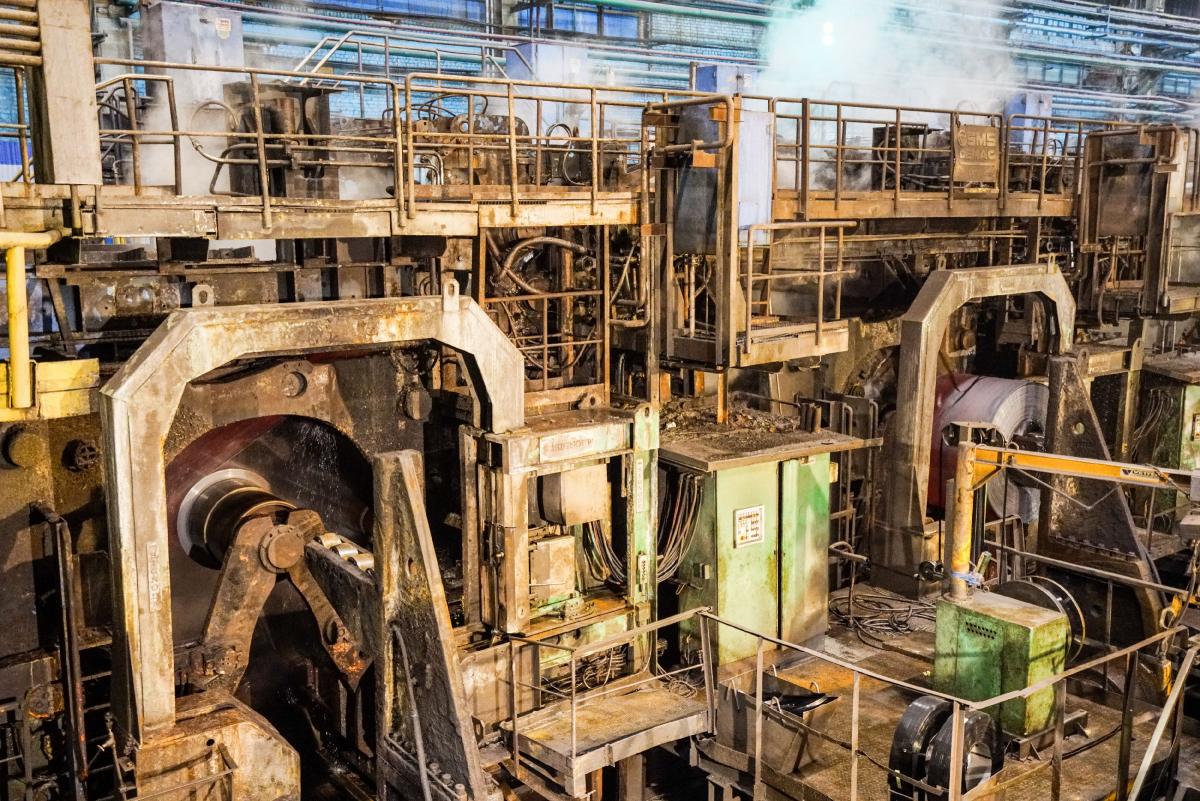 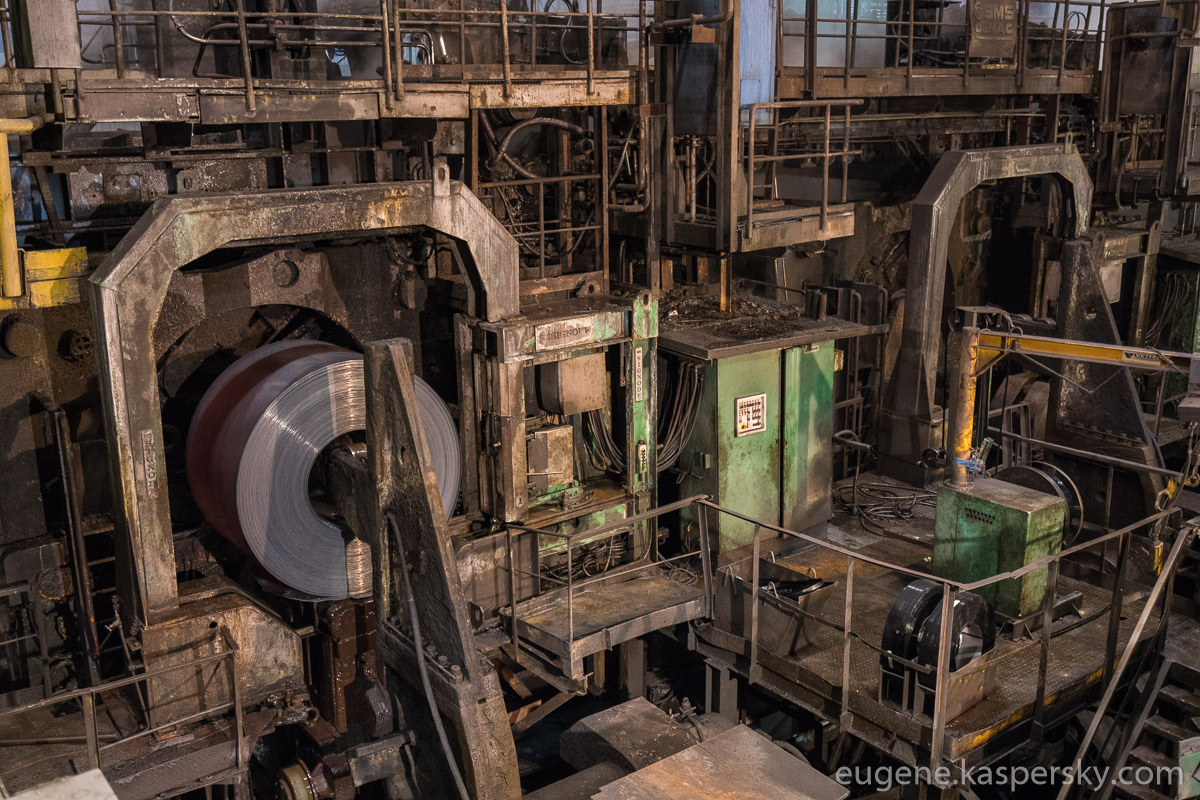 The finished rolls are offloaded and sent either to another workshop for processing or further afield to be sold. One roll sells for around a million rubles ($15,700).

The whole process is automated; we didn’t see a single member of the controller-staff near the production processes – only us tourists :).

So there you have it – a world-class workshop producing hot-rolled steel. An uncommonly interesting thing to behold and learn about. Now my knowledge of rolled metal production is much better than before. I recommend everyone improve theirs too – if ever passing Lipetsk :).

Next up… you won’t believe it…

Can you guess in what way exactly? No looking it up on the Internet!…