So, boys and girls – how many of you have been to a steelmaking plant? A show of hands please…

Well, I’d not been to one either, but dreamed of doing so for a very long time. I wanted to have a look at the whole process, even if from a distance. To see how they load ore and coke into the blast furnace, hear it sizzle and fuse, and see the liquid metal getting poured to form red slabs of metal at thousand-degree temperatures to be rolled on the mill. I knew some of the theory and terminology, but had never seen the magic happen first-hand.

As if you couldn’t guess… finally – it came about! Our respected corporate customer Novolipetsk Steel invited us to Lipetsk for a look around! 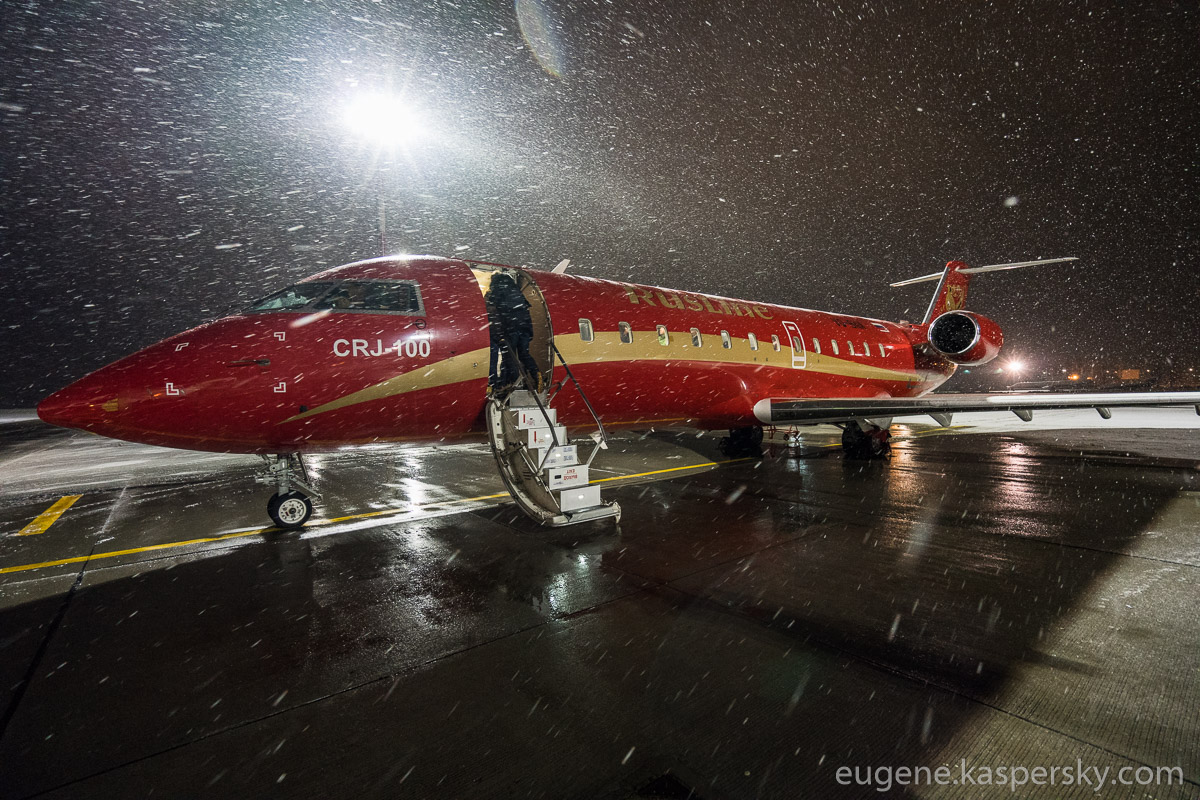 And here’s the office building at the plant:

The plant sprawling industrial complex is colossal. I mean, absurdly massive. Situated 440km southeast of Moscow, it’s around 5-6km long and 3-4km across (I think I recall 25km²). It’s almost as big as the rest of Lipetsk in which it’s located – a city of half a million. Here it is (the complex), ringed in red: 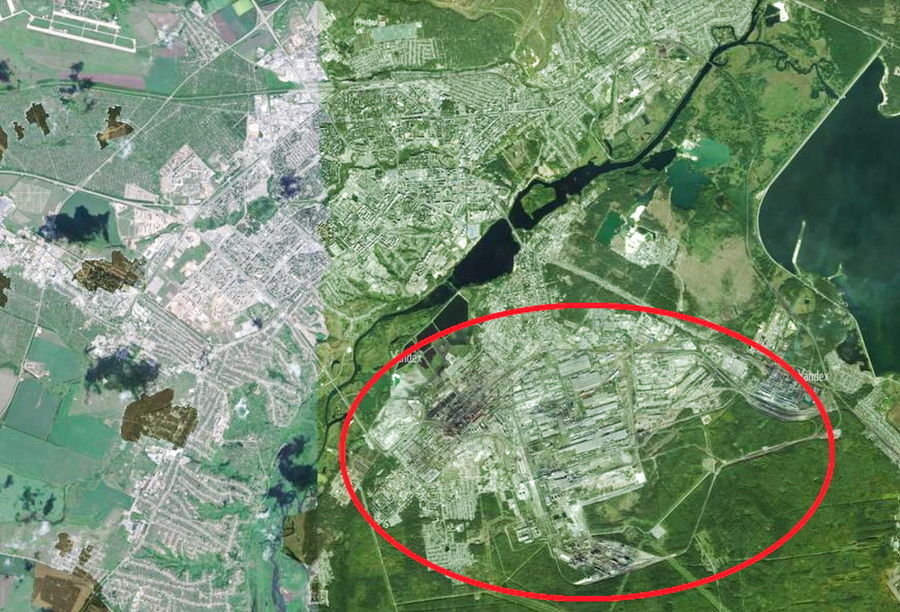 Overawed by the size of the place, my first question to the friendly management was: “How many independent works is the whole complex made up of?” To this they thought for a bit and made a few calculations, but couldn’t give me a precise answer. Still, what is clear is that there are many works; a lot is manufactured, loaded up and shipped; and a lot is consumed and… cleansed. Re the latter – I mean, for example, there’s a whole plant here dedicated just to purifying the water to be used in the production processes. The complex even has its own internal railroad!

Here’s a diagram showing the layout of the main production facilities. It’s in Russian, but you can see it totals 11 separate plants! 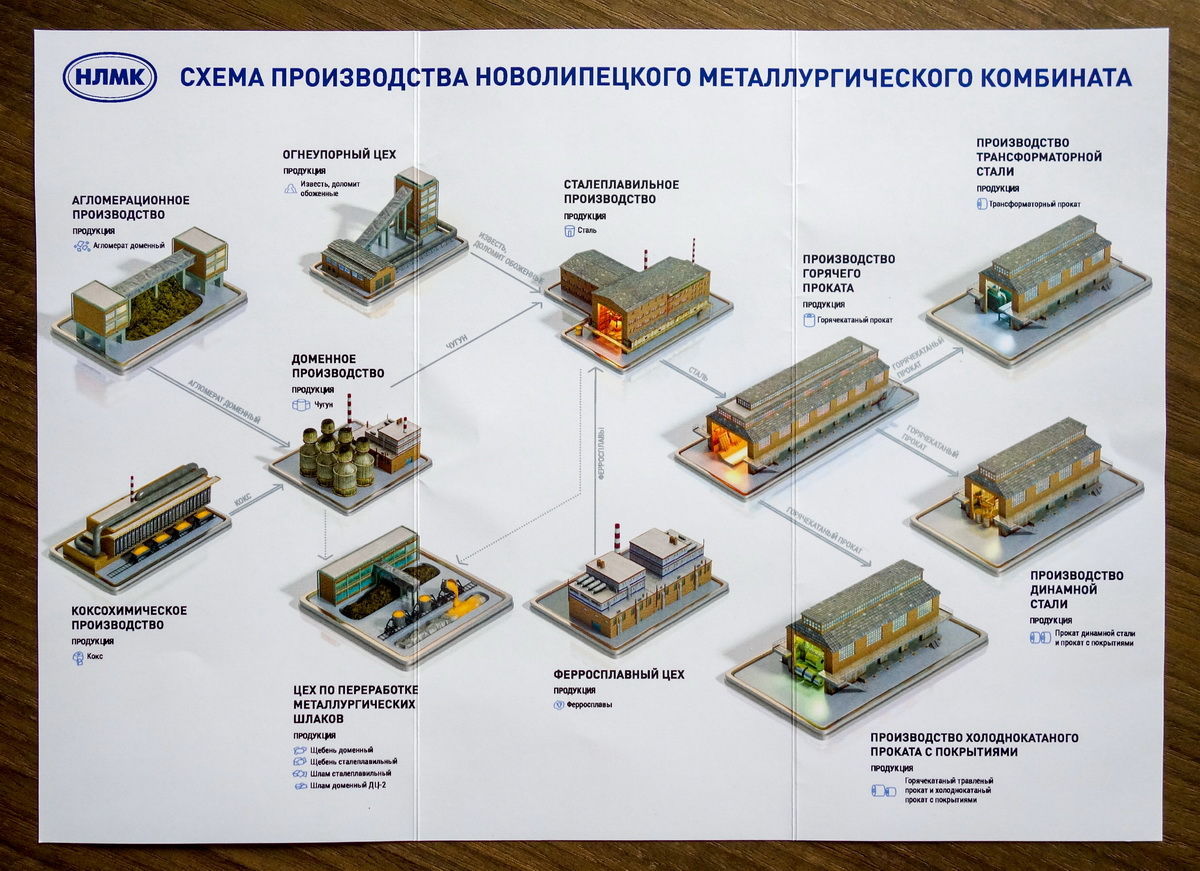 The iron ore comes from the Kursk Magnetic Anomaly, a stretch of magnetism so strongly anomalous that folks tell of lightning… striking parallel to Earth! I mean – instead of a bolt of lightning striking down at an object like a tower on the ground, the lightning shoots out of a cloud to the side! Whoah. Need to see one of those :).

The ore (actually the enriched ore), together with coke, is turned into agglomerate. No not that Coke; and not the other coke either. You’ve been watching too much Narcos.

Anyway, the ore is enriched and turned into agglomerate, and from the other side coal is burnt with a special method (without oxygen), some more chemical wizardry is added to the potion, and it all keeps being constantly fed into the blast furnace, out of which is poured cast iron, from which the scum is drawn off, and so on and so on…

The iron is then turned into steel using various methods, which is then rolled out and sent to other plant buildings in the complex – or sold. Nothing goes to waste – even the scum can be sold; especially when roads need laying. And when no roads are being built, they think up new applications… for example… a ski resort!

The plant smelts around 15 million tons of steel a year. Sounds a lot – is a lot. Still difficult trying to quantify 15 million tons. How many kilograms of iron does a family consume in a year? How many are in your car, in knives and frying pans, washing machines, and baby strollers? How much do we throw away in a year? Let’s not forget brake discs, tires (steel’s inside)…

The list goes on. Tot it all up: how much do you use in your house/apartment (not including the reinforcements in the walls or the cables in the lifts, but, I guess… that could be included too). And how much do you throw away and recycle in a year?

Important: don’t confuse iron with steel, or aluminum with titanium or copper!

Come on then, what are your totals?