Sometimes it seems such a shame there are just 24 hours in a day here on planet earth – normally. But it is possible to have less (why would anyone want that?), or – hurray! – to have more, if you’re careful with your choice of globetrotting-by-plane or certain-national-border-hopping-on-the-ground, that is…

But there are also occasions when you can lose a whole day, as in – a certain day you never see at all, it just passes you by or just never exists for you, and not because of a sleep-athon or coma or some such… I wonder – does that make you a day older? Younger? Hmmm.

So, how can you have a day just never occur for you? Well, here’s an example:

You board a plane, let’s say on August 28 and 14:30 in Santiago de Chile, and 14 hours later, with no night falling during that time, you land in Sydney de Australia. The local time at the destination: 17:30. But the day? August 30! WHAT? Where’d the full 24 hours of August 29 go? It disappeared down a black hole of time, aka the International Date Line. But if the IDL is imaginary… so, that means the day disappeared because of something only imagined and not real? Ok, I’ll stop there before your brain fries more than mine…

To help soothe your frazzled brains, herewith, a few entirely unrelated pics for your viewing pleasure, just when you need them most:

On the other hand, I’ve often had days that never seem to end.

For example, I’ve been woken up at around 2am by my alarm clock (hate that) in Thailand after a partner conference so as to get to the airport in time for my flight departing at 6am – to Tokyo (a timing/route mercifully since closed). Next up – a connection to San Francisco, California. All that in ONE calendar day (kinda), which ends up lasting something like 35-40 hours. Of course, one’s mental state upon arrival at the final destination is a cross between that of a vegetable and a zombie: red eyes, one side of the face lower than the other, perma-frown, very grumpy, etc., etc.: not a pretty sight. But what can you do? Duty calls.

So that’s how regular long-haulers lose or gain hours to their lives up in the air. Meanwhile, down on the ground you get a similar thing, only on a much smaller scale. You can’t go anywhere near as fast as a plane, so the most you can add or take off a day is an hour or two, possibly three at a stretch; more – only if there are two hours’ difference on a border and daylight saving time affects things.

So where can you get spookily-vanishing or magically-appearing hours of a day on the ground?

Here are few: Greece–Turkey, Belarus–Poland, Russia (Pechenga) – Norway (Kirkenes). I’m sure if you dig around there’ll be more such places. Polar time-warping is a different story. Antarctic stations use the time of their supply base: no matter how many times you may speed around the icy continent it’ll always be New Zealand time. But I digress…

So, what am I getting at? Well, just that when you’ve a hectic business schedule taking you to several countries in as many days, there’s no time for tourism – not even the micro-tourism I’m often forced to settle for. You fly into a super city that totally warrants multiple close touristic-inspections – for example, Amsterdam – yet you only have an hour or two in among the interminable days daze of hustle and bustle. Grrrr.

Ok, I’m overdramatizing the hustle-bustle bit. It’s not so hard telling folks – our partners and users and the press – our side of the story after they’ve heard the other side: it’s a no brainer (nothing to hide; they’ve come after us as we’re the best at detecting their %@*!:). It’s just that I need to do it rather a lot of late – all over the world. Shouldn’t grumble really; it gets me out and about :).

So, this no brainer: yes, we’re the best. We catch out cyber-evil before you can say ‘we’re still waiting to see your evidence… ah – that’s right – there isn’t any and never will be’, i.e., faster and better than the rest, no matter the language, color, creed, flag or intentions of the bad guys behind them. Yes, our detection is harsh; yes, it’s ruthless. It has to be. Otherwise it won’t catch out hi-end cyberattacks and might as well give up. And certain folks in high places don’t like this one bit: our higher purpose ruins their plans.

I came up with this here thesis while on my travels this week: ‘if they cover you in manure, at least shake it all off on your own vegetable patch’. Well, that’s just what I’m doing.

But enough of all that. Back to tourism – rather the lack (mostly) – thereof. I say mostly as we did get one long-awaited spot of Amsterdam tourism in: we made a brief visit to the Maritime Museum.

Oops. The last pic shouldn’t be here really. It was just my attempt at a photographic representation of the fact that we had a business event here, since I was talking for most of the time and could hardly pull out my camera half-way through now could I?

We did get to see the museum too, not just its nice main hall…

What can I say? Briefly: this is a must-see museum for next time you’re in the Dutch capital, especially if you’re with young children: they’d love the old maps drawn by hand showing the unusual early depictions of the world’s continents and oceans…

Oh, these maps are the originals!

Compasses were coated in copper so they didn’t spoil. 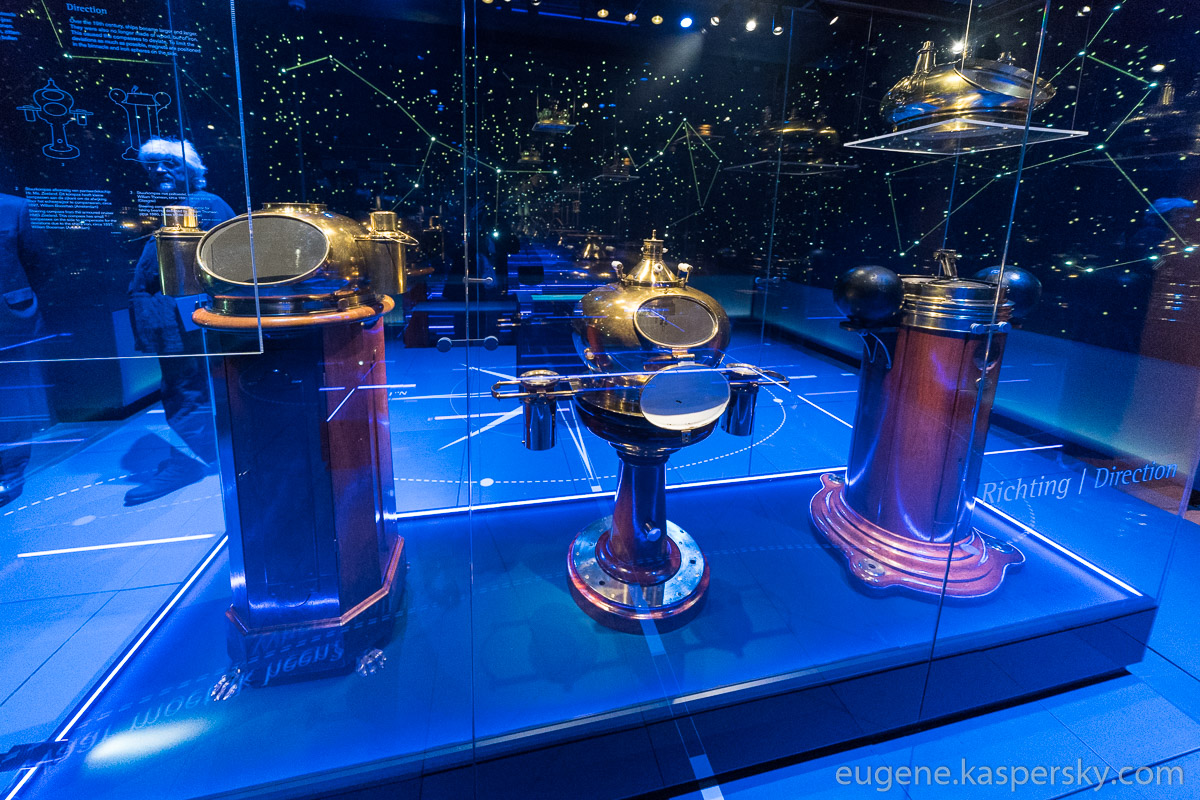 The copper helped block electromagnetic fields too, much as a Faraday cage does.

The museum’s hall is delightful. Especially when there’s a tasty buffet neatly set out on white tableclothed tables in the middle ). Just look at the ceiling:

Next up: a brief cruise along Amsterdam’s canals and under its bridges:

Amsterdam: a great city. A right-on city. And not because of the coffee shops :).