Like many boys, I’m fascinated by all things industrial, and the more industrial – the better. So when things get massively and grandiosely industrial, I get fairly euphoric. So when I was recently at the massively grandiose Itaipu Dam on the border of Brazil and Paraguay – the euphoria went off the scale…

A monumental construction – and the second-largest hydroelectric power plant in the world (the largest is Three Gorges Dam in China, which I visited last year). A gigantic dam with 20 generators, probably some five kilometers in width (here’s the view from a satellite) that provides electricity for practically the whole of Paraguay and a sixth of Brazil. Curiously, it actually produces more electricity per year than Three Gorges, even though it has much less capacity. Why? Three Gorges sees very little water for six months of every year. Itaipu on the other hand has water in spades buckets lakes all year round ). 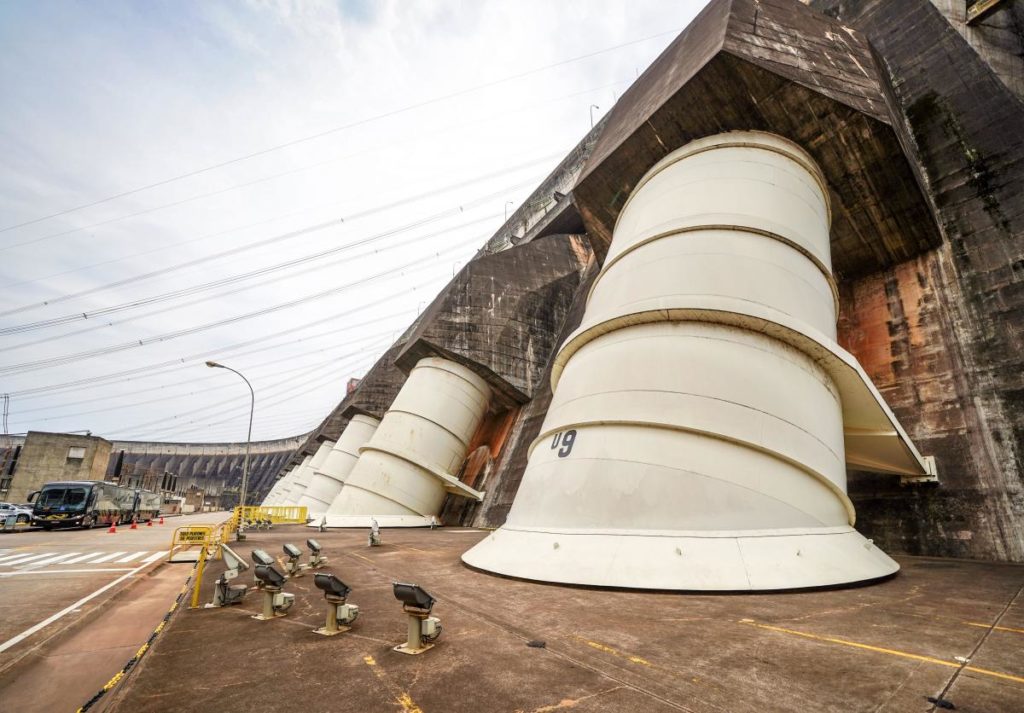 This dam is one of the very few of the big-league ones around the world that provides excursions to tourists. You just turn up for one of the regularly scheduled guided tours, buy a ticket, put a hard hat on, and off you shimmy… 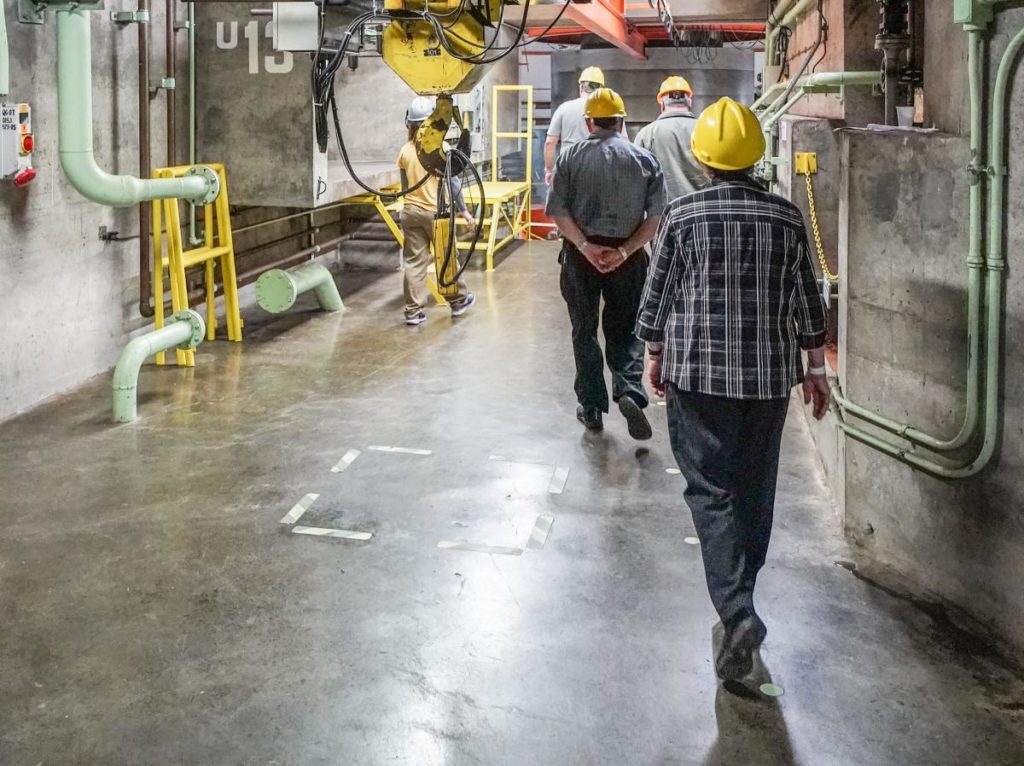 So, the concrete of both the dam and the generation housing is a whopping 270 meters in width at the very bottom! Multiply that by the length of the concrete of the dam, then multiply that again by the height and… what you get is an absurdly colossal quantity of concrete.

Btw, I recall some more figures from this bit of our guided tour: when constructing the dam, crazy amounts of concrete were poured every hour and, given the very warm climate, that they had to constantly add kilotons of… ice to the mix – so that the concrete cooled and solidified evenly.

Onwards with our excursion…

The entrance into the dam: 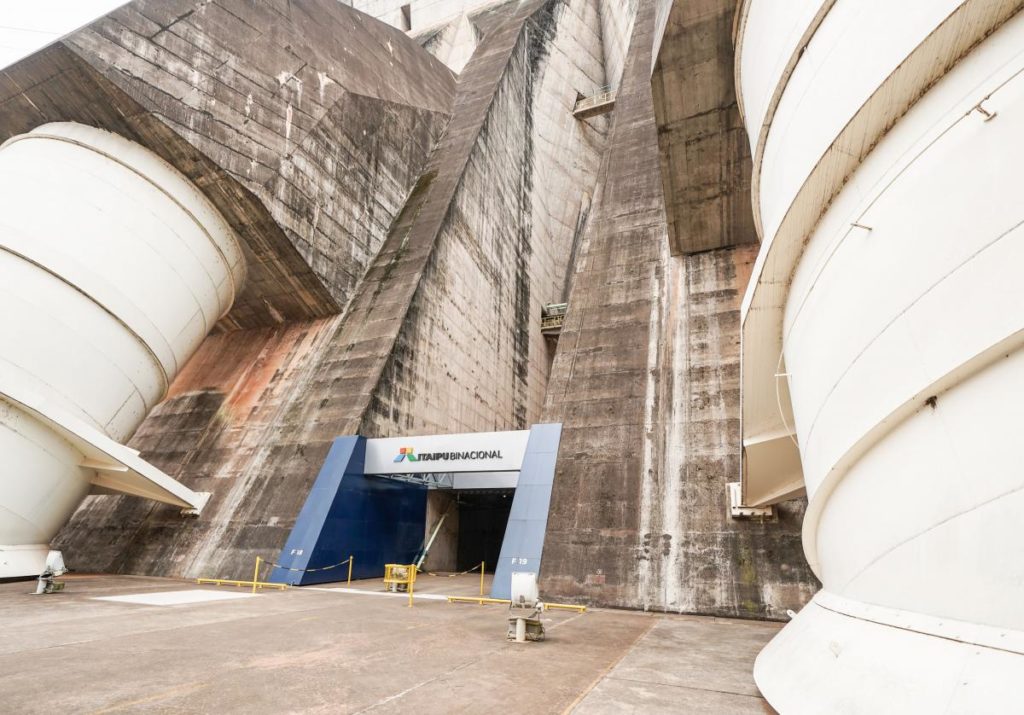 The dam’s shape is a bit like an accordion; it was built like that to save zillions of kilotons of concrete without its losing any strength. It all reminded me of a cathedral (in fact these constructions are nicknamed ‘the cathedral’).

Not for those with vertigo ). And you have to hold on to your hard hat otherwise it’ll end up all the way down there… 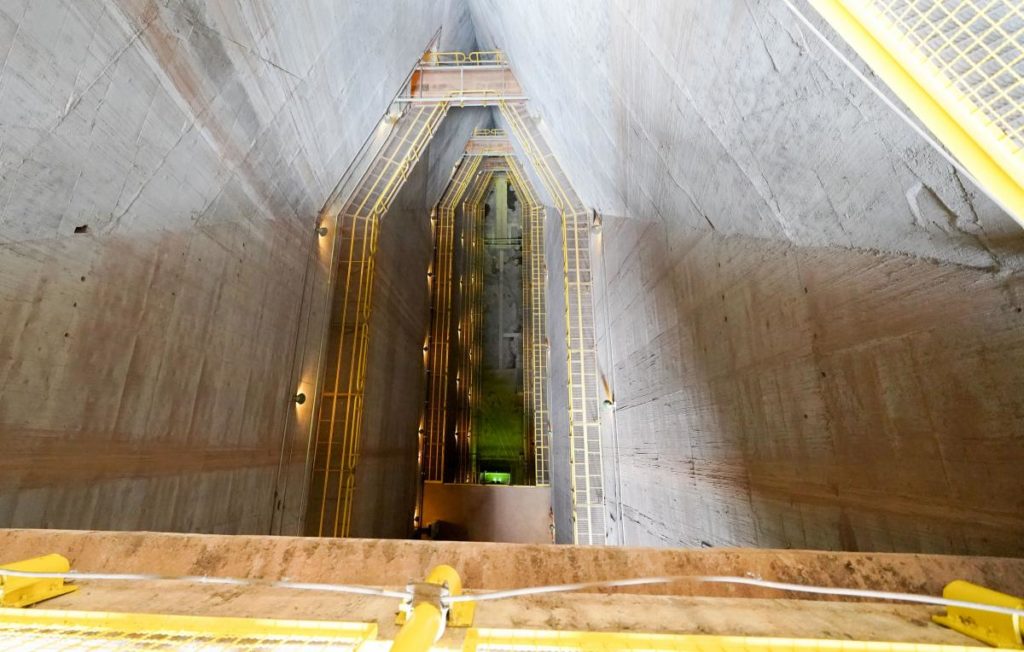 Btw – here’s a piece of the old bottom of the river… Eek; almost forgot: the river’s called the Parana – the second longest in South America (guess the longest?). Anyway… here’s the former riverbed: 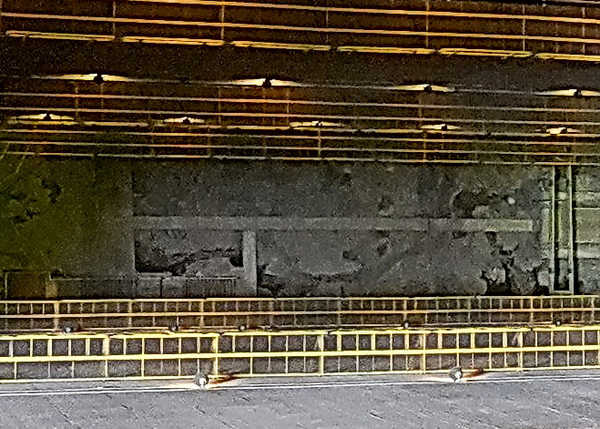 The view of the dam from the side: 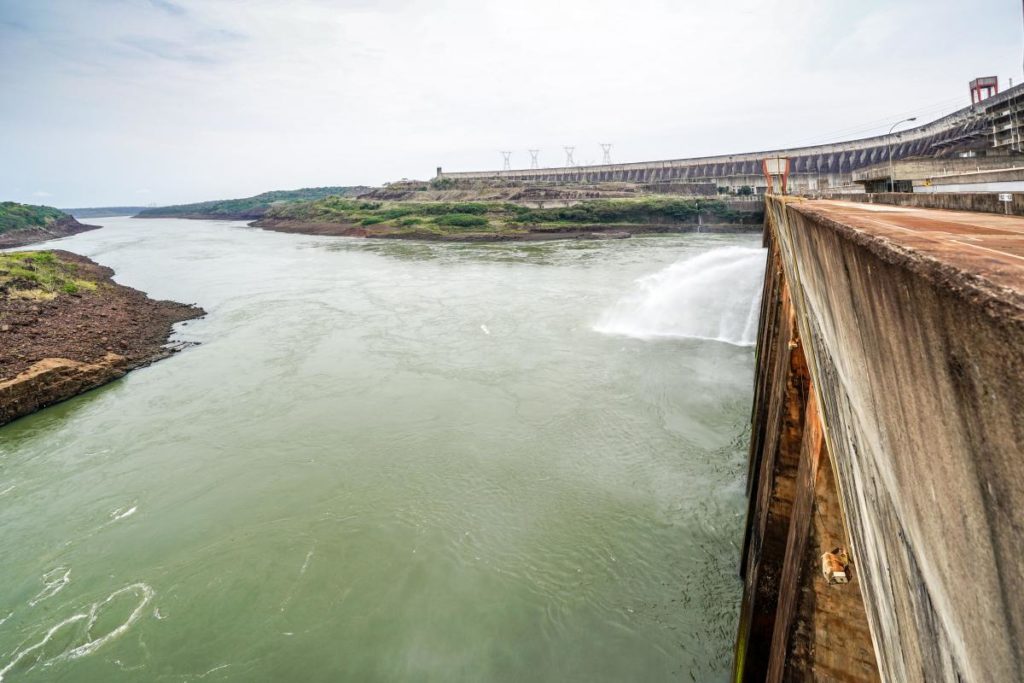 And the panorama from the riverbank: 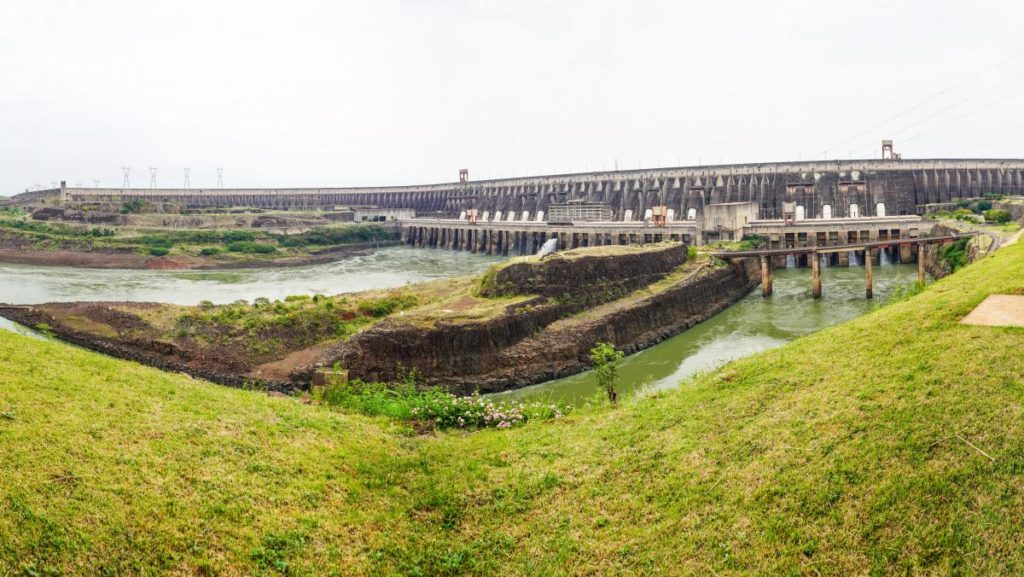 And from up in a chopper: 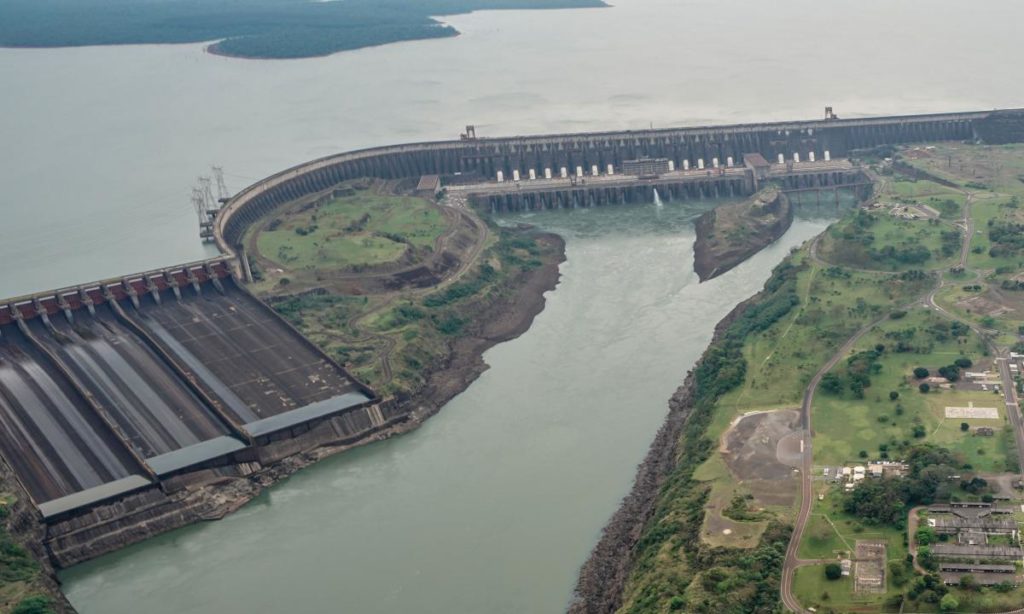 An overhead view of the generation section plus the control building: 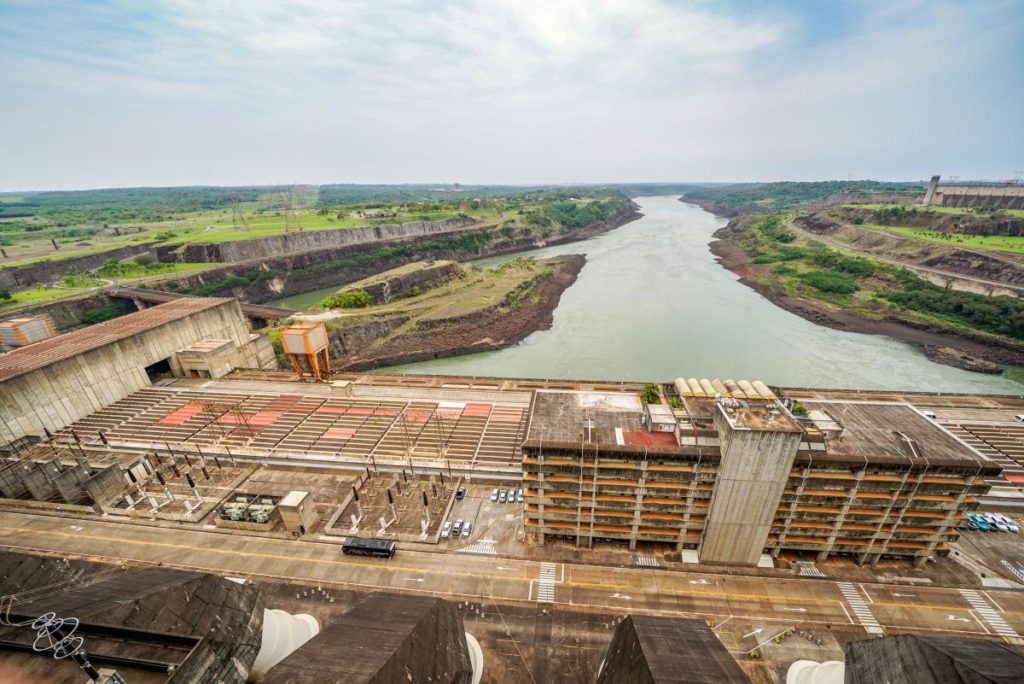 And here’s the inside of the same control building. And it’s all visible from behind the glass – no secrets at all! 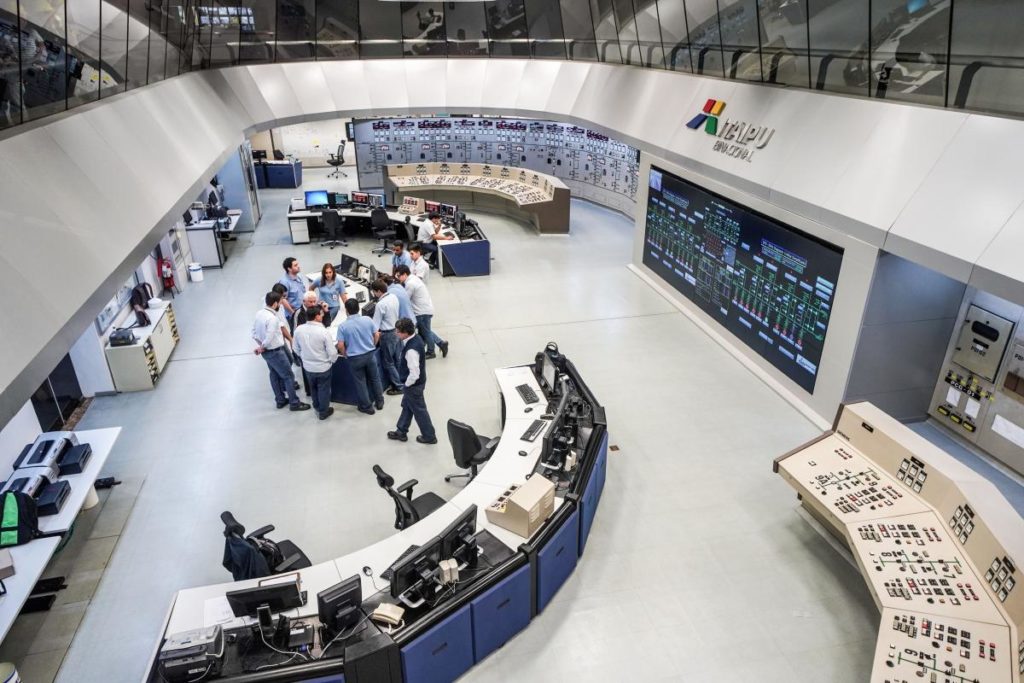 The yellow line here on the floor marks the border between Brazil and Paraguay. But not border controls here – you can walk to and fro over it as much as you like if you really want to ). 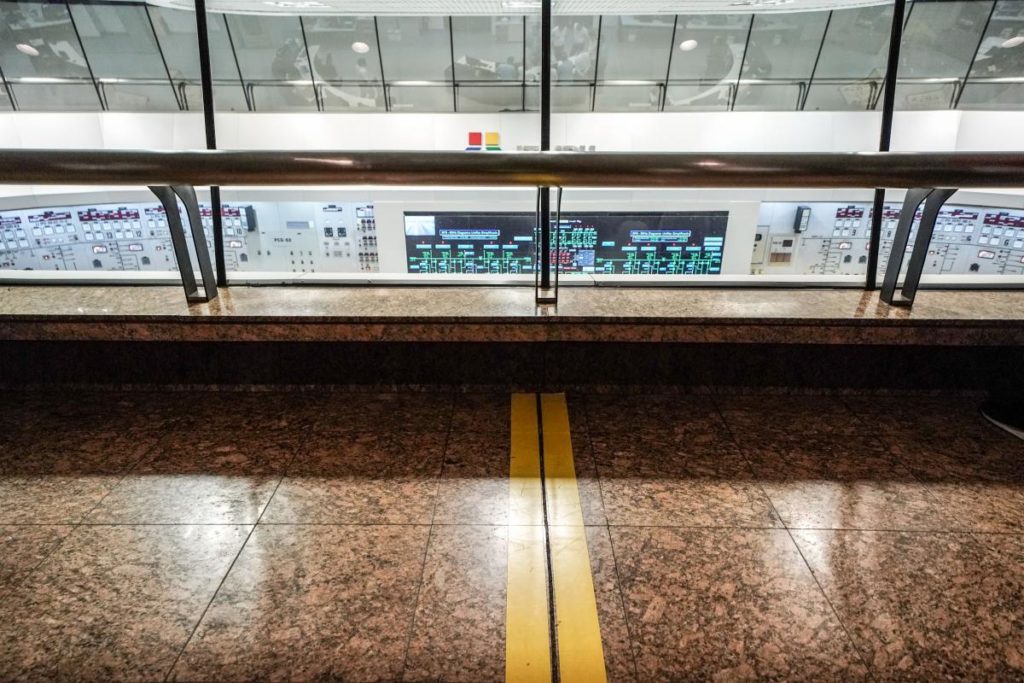 The numbers on the buttons of the lift gave me a bit of a shock at first – 144 floors? Turned out they show the heights in meters of the various stops. 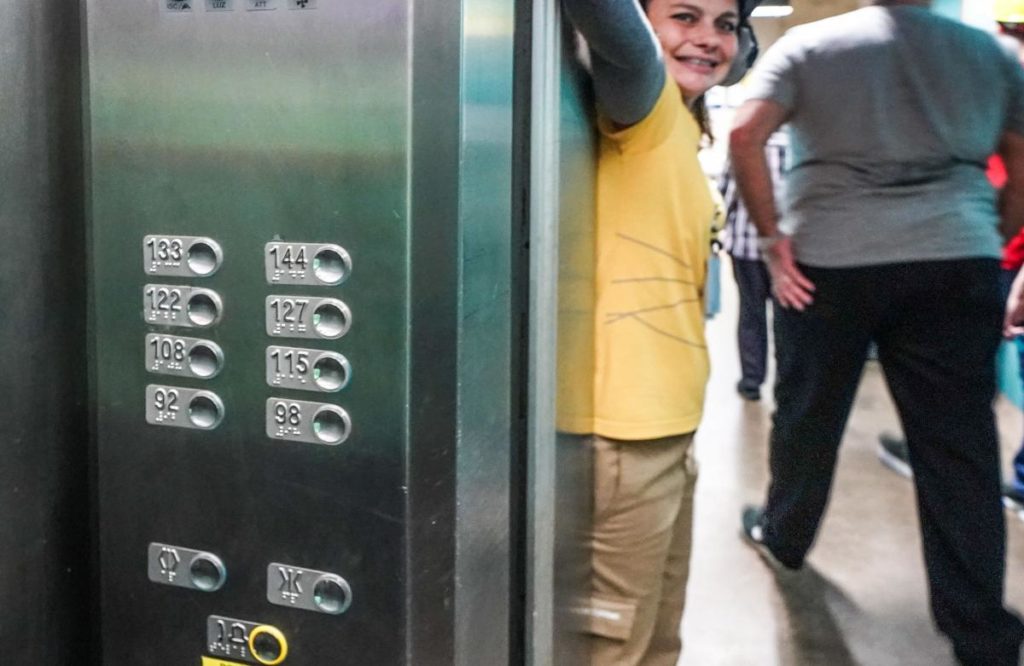 The generation part – monstrously immense. But, then, it would be if it’s to house 20 monstrously massive generators. 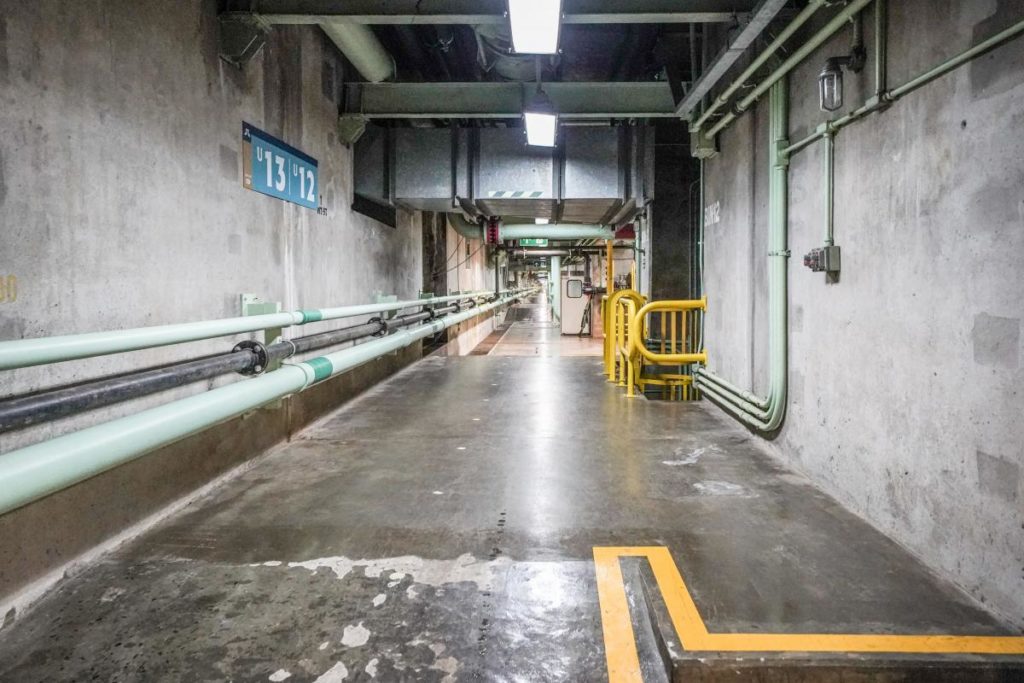 And here’s a generator/turbine, which turns and makes electricity for the masses: 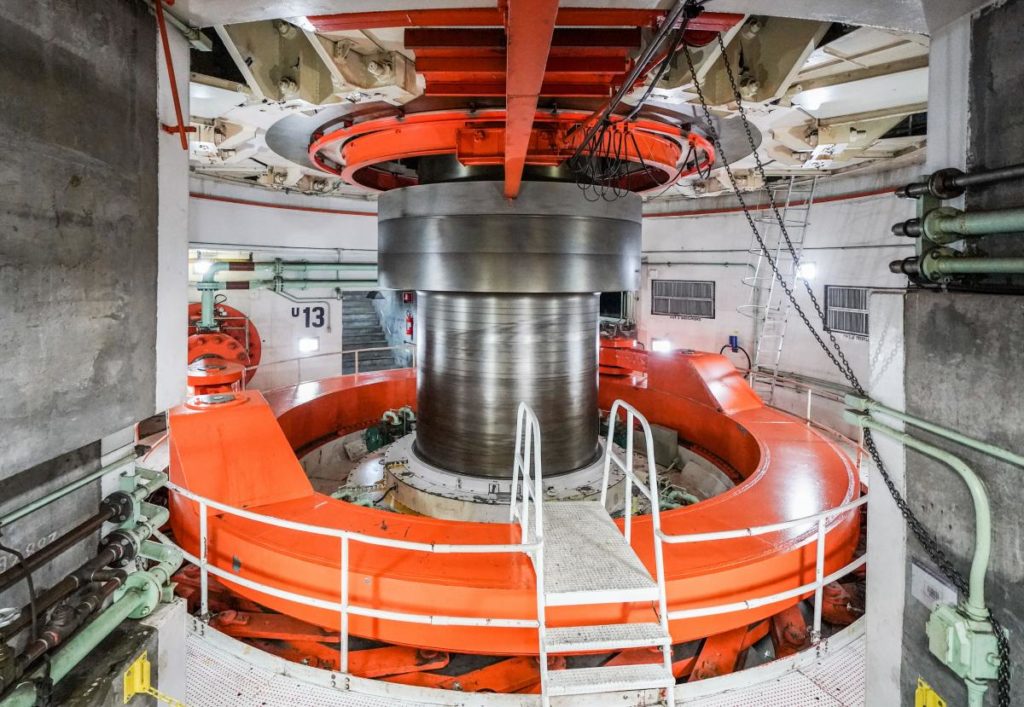 Btw, the water enters the turbine horizontally to revolve it. I recall Russian hydroelectric power plants having the water streaming down into the blades of the turbine. I wonder what the difference is? Anyone know?

Upwards we march – out onto the ‘roof’. The next bit of hydro-industrialism: the sluiceway. 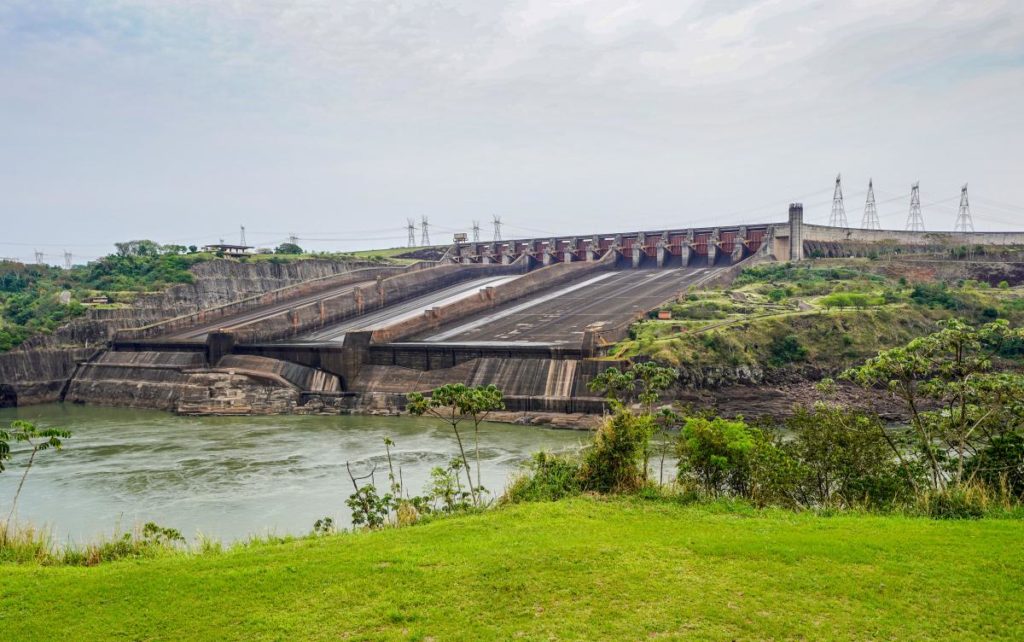 Alas it’s spring here in September, so it’s dry and the water level is low. This is what it gets like in April:

Woah, I thought: how mad would that be to raft down. Hmmm. Suicidal more like… 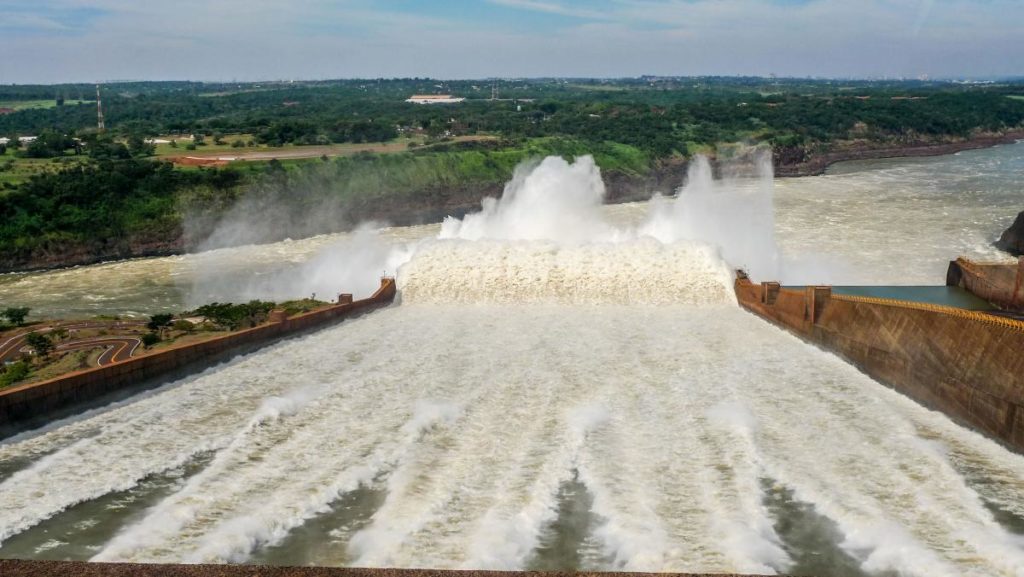 Btw, the dam is run by both the Brazilians and Paraguayans jointly. Each country gets half the electricity produced, but Paraguay doesn’t need all of its portion, so it sells the rest to Brazil… 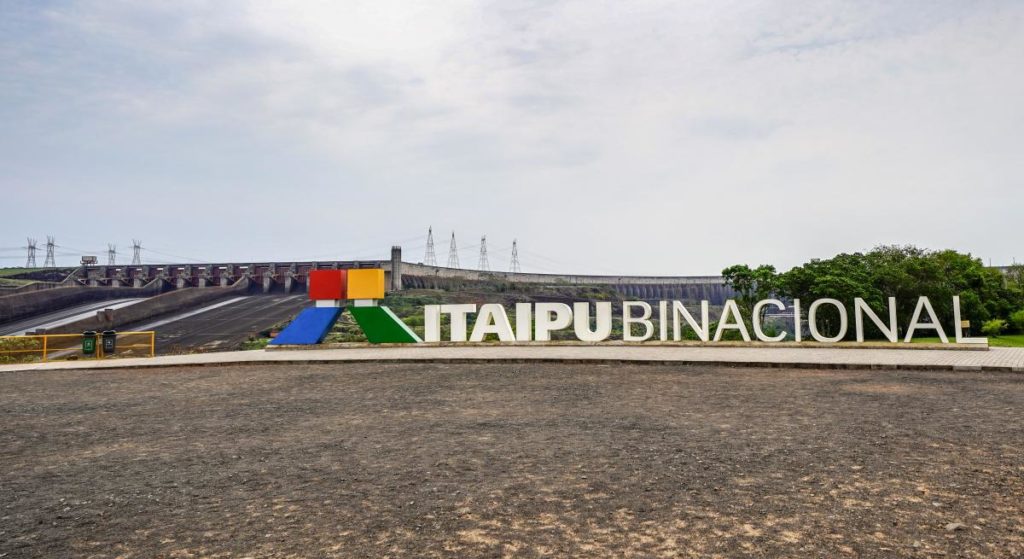 They say that there’s a cordoned off zone of neutral territory that circles the dam with its own special rules and restrictions. Access strictly forbidden – unless you work at the dam or are a tourist visiting it. 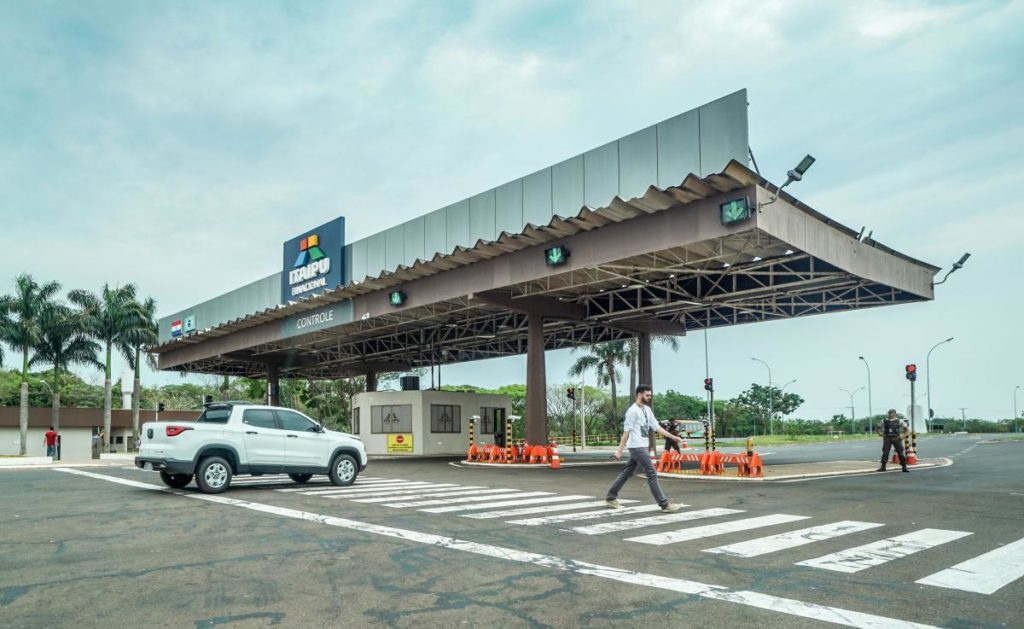 Btw, they call it a ‘demilitarized’ zone: no wars! Quite right too :). 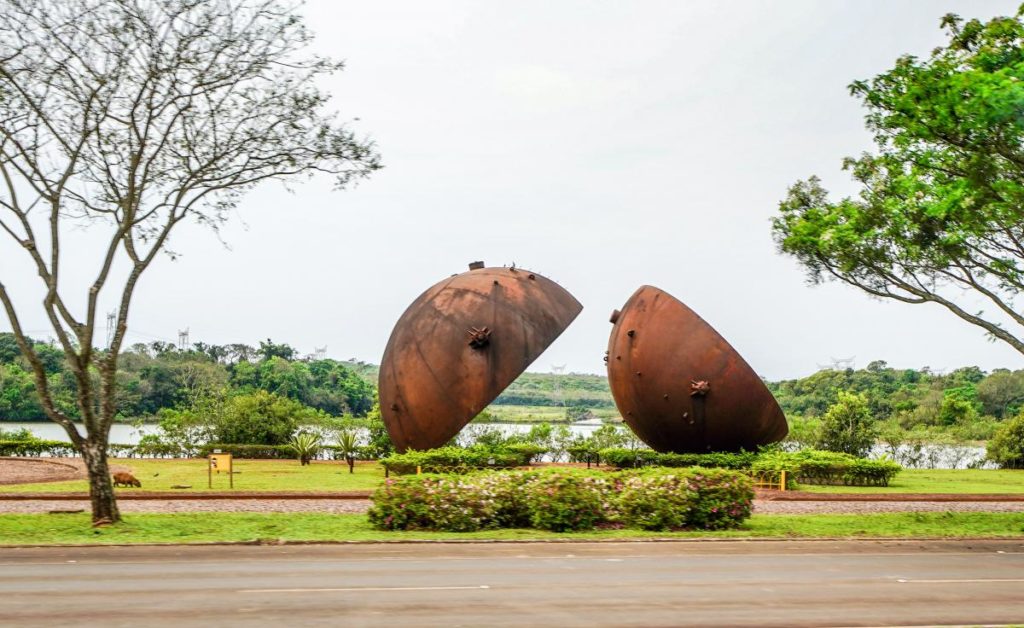 Btw, in the pic above you can see an animal grazing to the left – it’s a Capybara ). 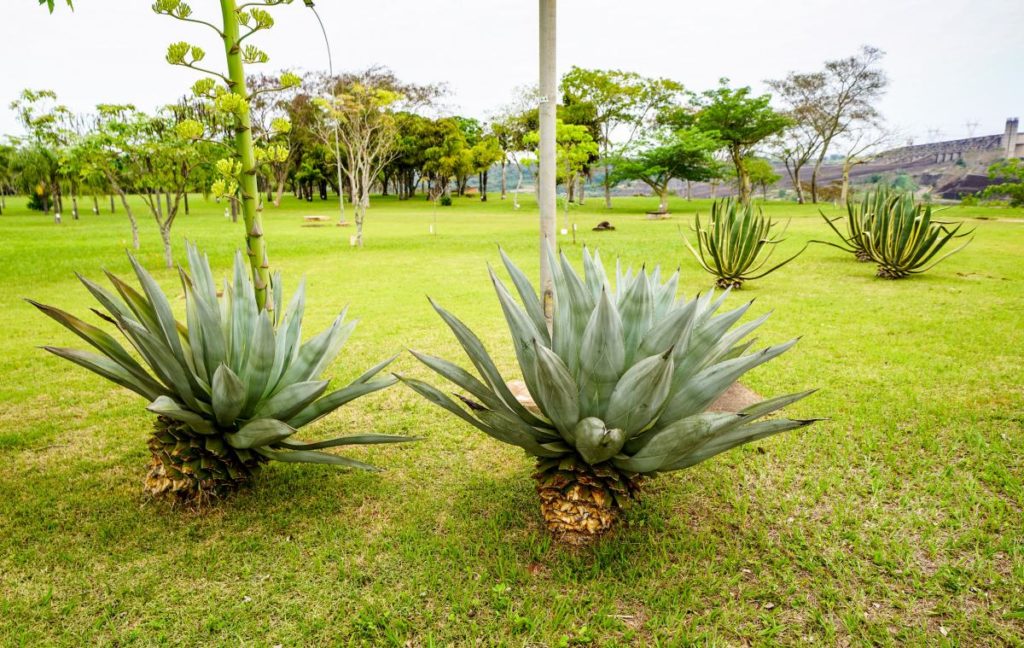 All nice and clean and tidy and ecological:

This here is… a fish canal! Installed so the fish can migrate as is their natural wont! Normally a dam cuts the surrounding ecosystem in half; not here! They’ve thought of everything – including the fish ). 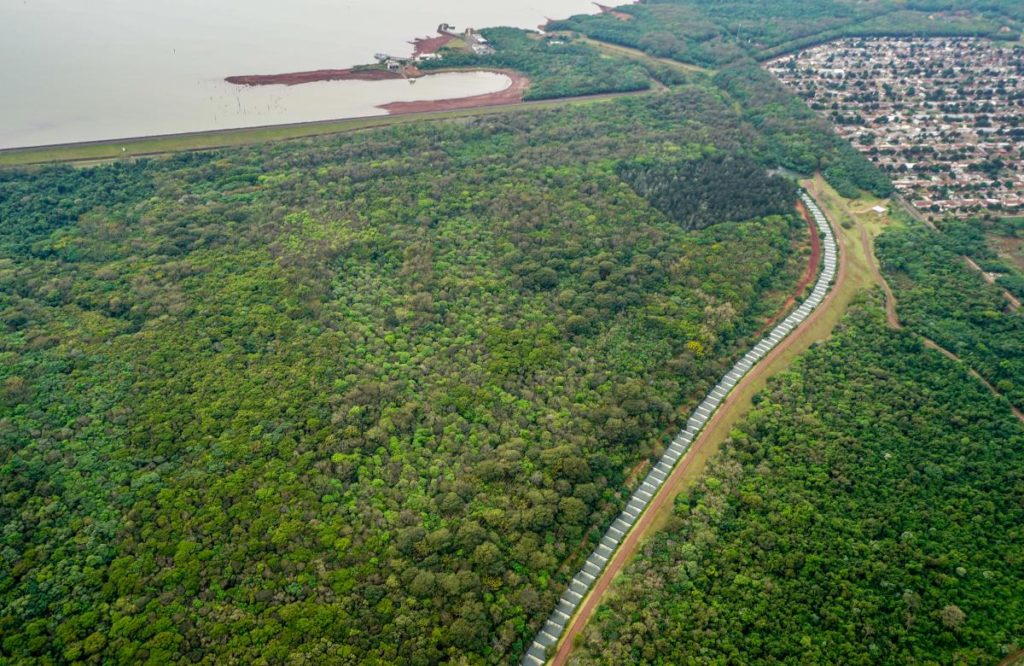 There’s also an industrial estate here and a lot more besides. In short, it’s a whole city-garden built on and around well-thought-out and perfectly implemented hydroelectric industrialism. If ever in these parts – it’s a must-see, no question.

PS – you worked out ‘the longest river in South America’ yet? Come on, it’s not difficult :)…