Rafting on Balyktyg-Khem and Ka-Khem (aka the Little Yenisei) was pretty chilled – there were no particularly dangerous rapids to speak of. The plan of action was simple: keep paddling along the main part of the river, keep clear of rocks and immediately obey the captain’s orders. The instruction that our crew performed fastest was “Stop!”.

There were only a few rapids, probably five. Apart from that there were sand bars with light riffles, fast sections, two or three standstill sections. For rafters, standstills are an inconvenience – you have to paddle! Thankfully, we always had the wind at our backs, or there was no wind at all.

Because this route is so long and so remote its level of difficulty has been classified as category 3. This was what the guides assured us in an attempt to rouse us from our stupor while relaxing in the soft summer sun, with virtually no mosquitoes or midges to bother us. Also, the guides scrupulously followed the rules and asked us to land before each section of rapids and perform a visual inspection of them before we continued. If the truth be told, we actually enjoyed the break.

All the rapids could be inspected from land, except one – I’ll tell you about it later. We could walk on the rocks; one time there was even a road along the bank. It was used in winter by cars to bypass the rapids that don’t freeze over.

Preparing for the expedition:

The topic of private islands was all the rage :)

Now for the most interesting section of rapids, which has the proud name of Shyoki, or ‘cheeks’ – the same name as the rapids we passed through last year on the Upper Katun river.

These rapids look more welcoming though. This place is a canyon that heads off in all directions, with fantastic views wherever you look, lively cataracts and imposing rocks, holes and the occasional pillow. In fact, there’s nothing really to worry about – you just need to keep to the mid-water and keep watch. This enjoyable section is around 8 km long – a pleasant jaunt! Here’s how it looks from above, in Google Maps and in Yandex Maps. (Well done Yandex, some good shots there!)

The section begins with this swashbuckling camping site :)

This is the last photo before we set off. 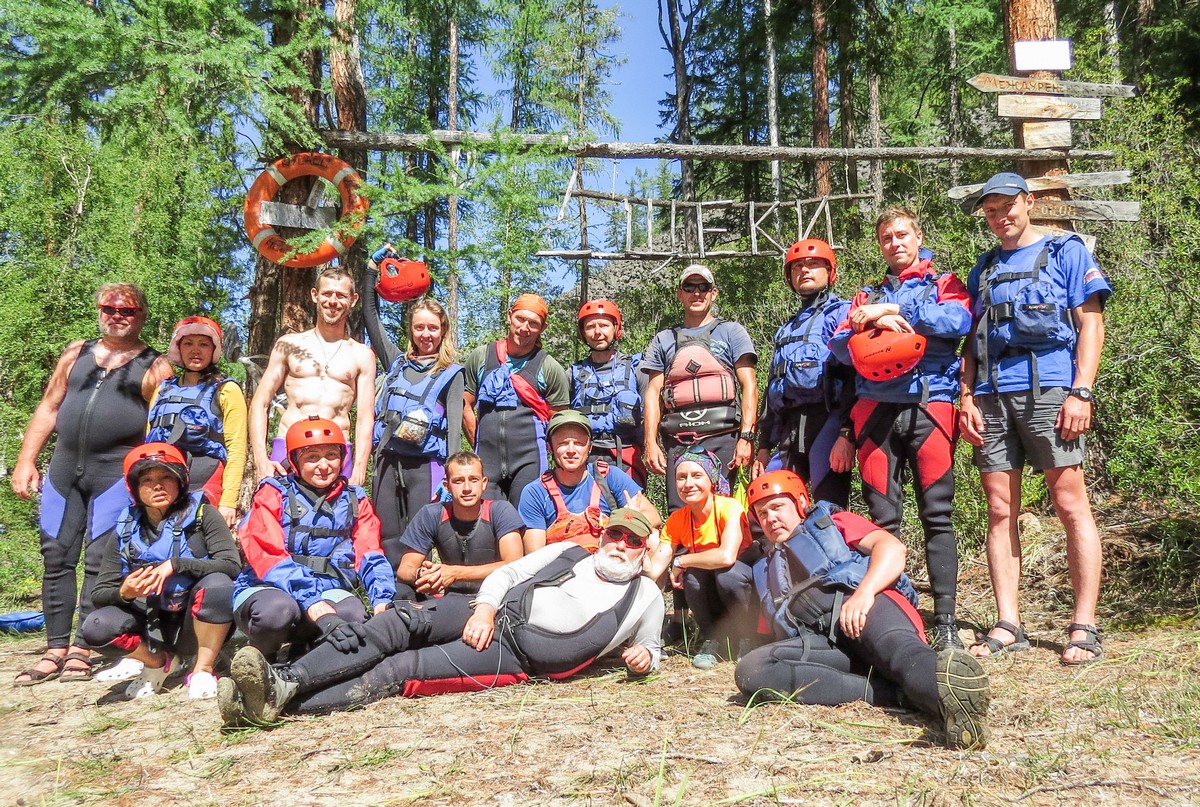 This is where the river gets squeezed into a canyon. The riverbed becomes narrower and the rocks on either side become taller and more imposing.

These were the only rapids we passed without a prior inspection. The steep rocky terrain makes it difficult for walking; an 8 km stretch along a meandering river would end up turning into a 16 km walk in one direction; walking both directions would take the whole day. Actually, it would also be nice to climb up there and meditate on the landscapes below. Anyway, a day’s rest at the Shyoki is recommended – but better to spend it walking along the banks rather than doing the handmade art installations. It’s very scenic.

And here comes our cargo vessel with a professional crew on board, seconds before jumping into this cataract… 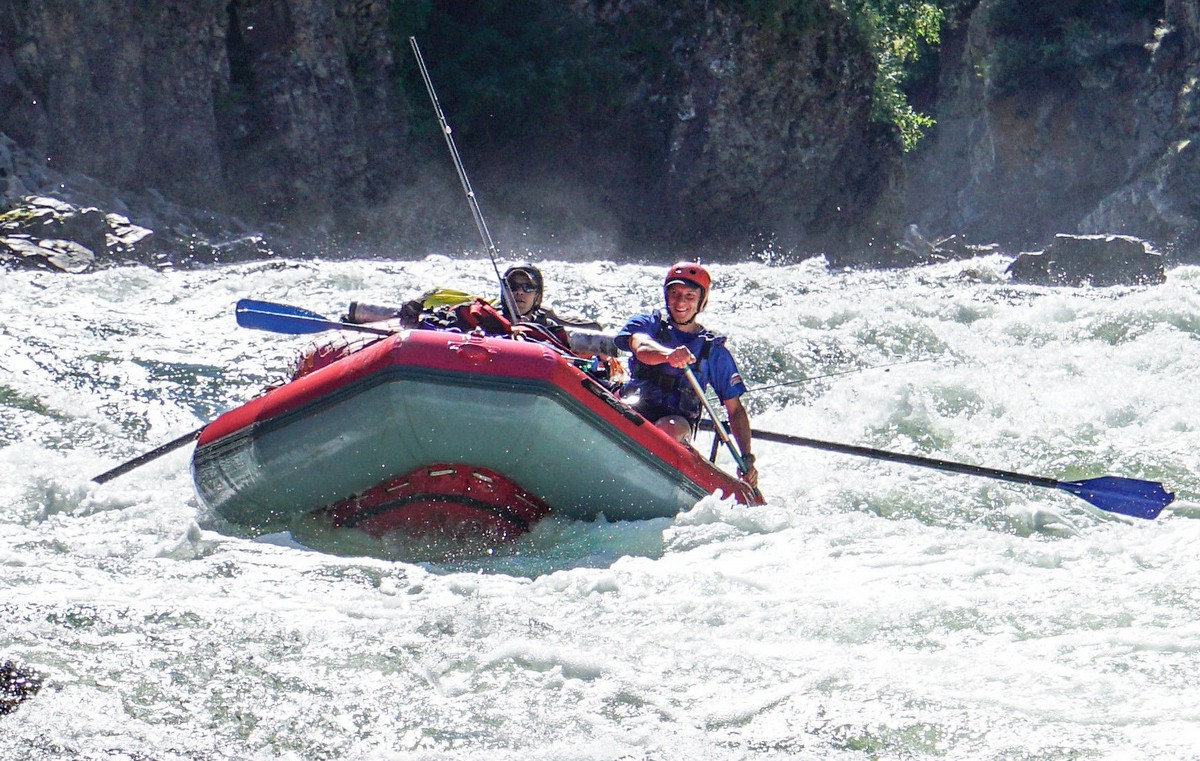 And then they valiantly landed, with the entire weight of our cargo, on the first rock sticking out the water! But there was no damage done :)

And here is the exit from this section of rapids. There’s a ravine, vertical rocks, and then stillness. An indescribable beauty! 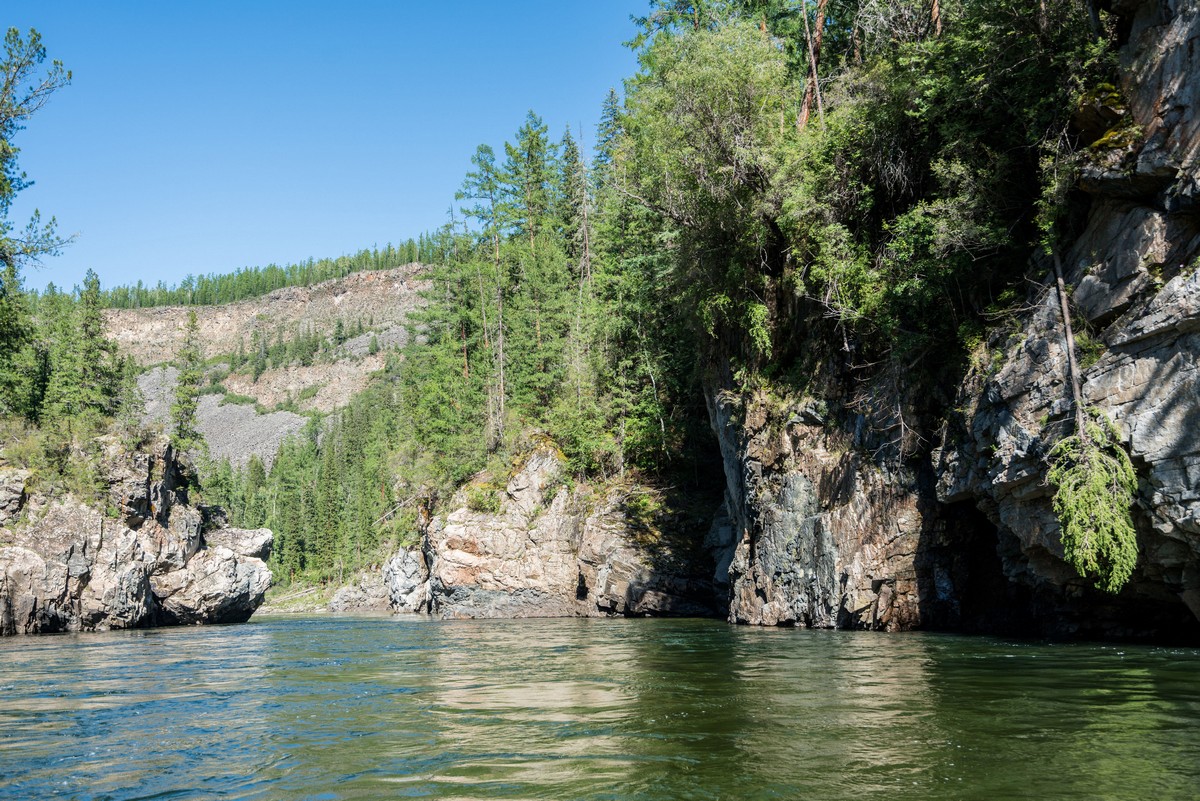 It was a breathtaking place. Everybody started rummaging in their waterproof bags for their most valuable item and started taking pictures of the local wonders. 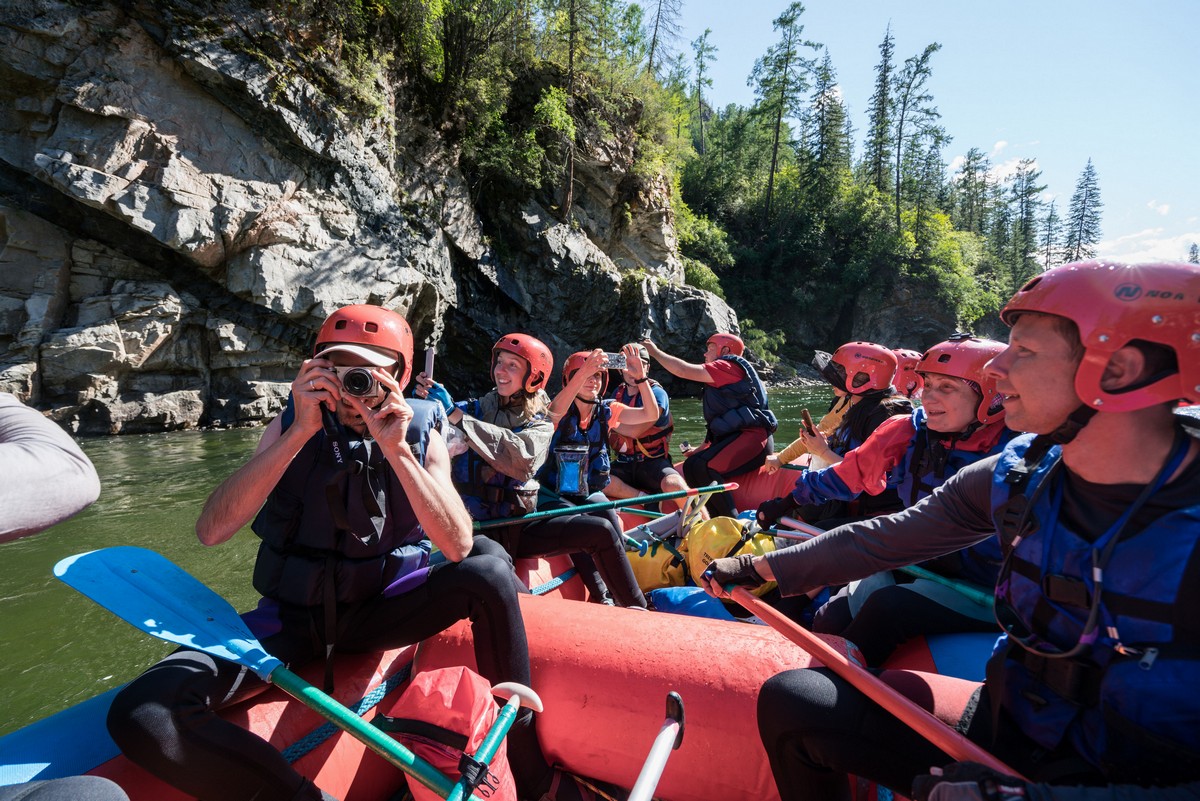 There are plenty of things to stare at in wonder…

And all of a sudden, from around the bend… 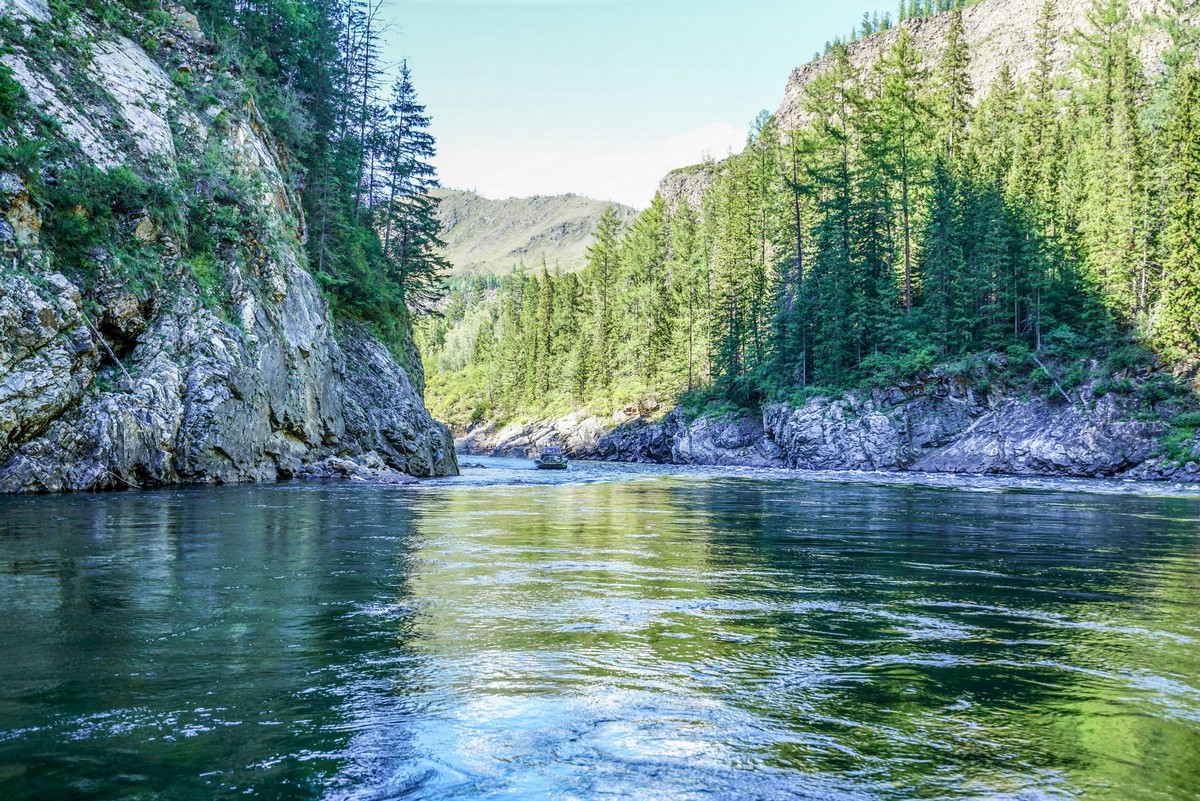 The revs of a motor! Hi there – Hi! And it continues its way upstream, through the rapids. It was apparently heading up to an Old Believer’s village – more about that later.

The local rocks and mountains deserve a few words of their own.

Judging by their appearance and by the look of the rocks on the river banks, the mountains look like a sedimentary material that was excreted from the subsurface by tectonic activity. Similar to the Ural Mountains, the Alps or the Caucasus. However, a little further uphill there are some peculiar horizontal flat features:

If you look carefully they look ‘layered’, and at some points they had a characteristic lava structure and patches of different colors.

And they are in fact made of ancient lava. This is apparently how it was: first, these mountains grew upwards, then water and glaciers cut valleys in them in all directions, then there were eruptions and red liquid lava flowed along the valleys instead of rivers. Even later, glaciers and water again cut new valleys along the old routes, but in the new lava rocks. This is amazing. I’ve never such a thing before.

The lava outcrops begin at the Shyoki, and continue for 70 km downstream, where the last ‘stages’ can be seen. Also, they continue for about 80 km upstream along the Kyzyl-Khem, and a volcano can be seen up there! It’s name is… let me check my map… it’s called Changys-Tayga, 2817 m above sea level. Neither Google nor Yandex know anything about it, except for the fact that it’s out there.

We continue rafting down the Upper Yenisei, and then, all of a sudden:

And if we take a closer look… 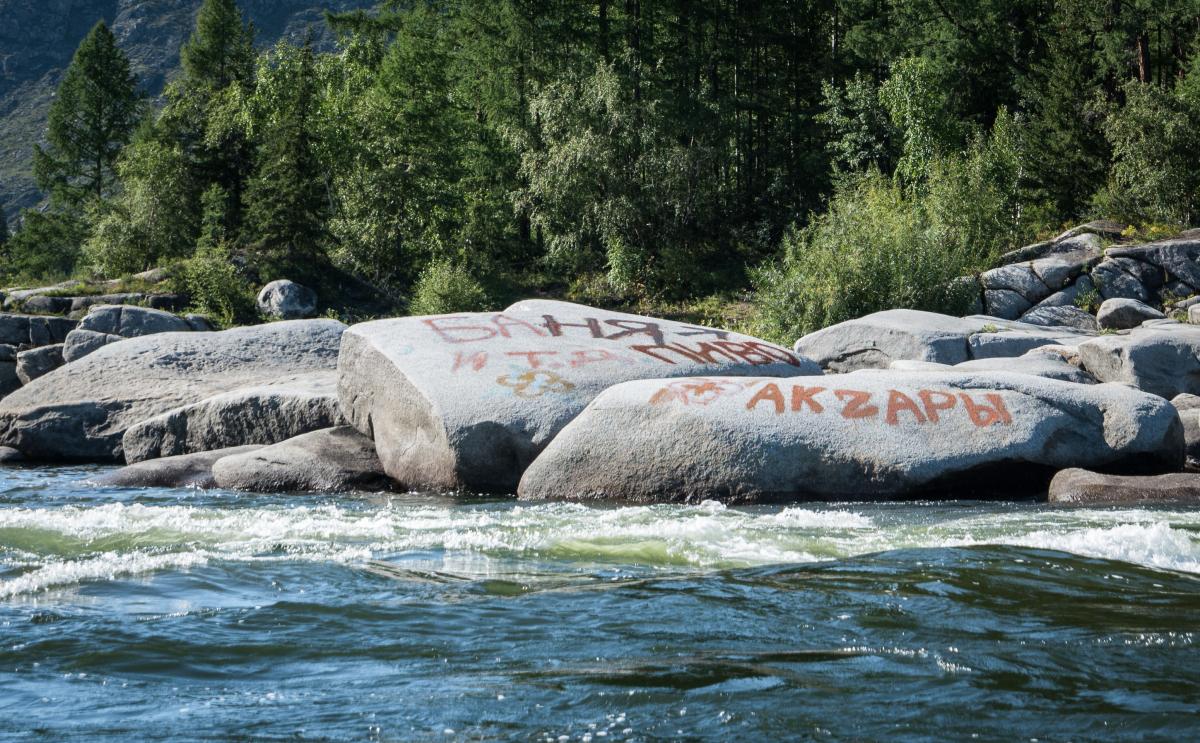 The writing on the rocks is advertising a sauna and beer. Our expedition decides to make an unplanned pit-stop :) Beer, mead and various other types of delights are available to water tourists. But that’s a topic for another blogpost.

All photos from the Yenisei rafting experience are available here.