I wasn’t quite expecting it but the island is a very beautiful one. It’s very green, with brightly colored flowers in places (in-between the potato fields). To the north it’s all rocks and cliffs along the coast. In good weather you can see the neighboring islands, and even a bit of France to the east.

In the evening we got to see a nice sunset above the sea: 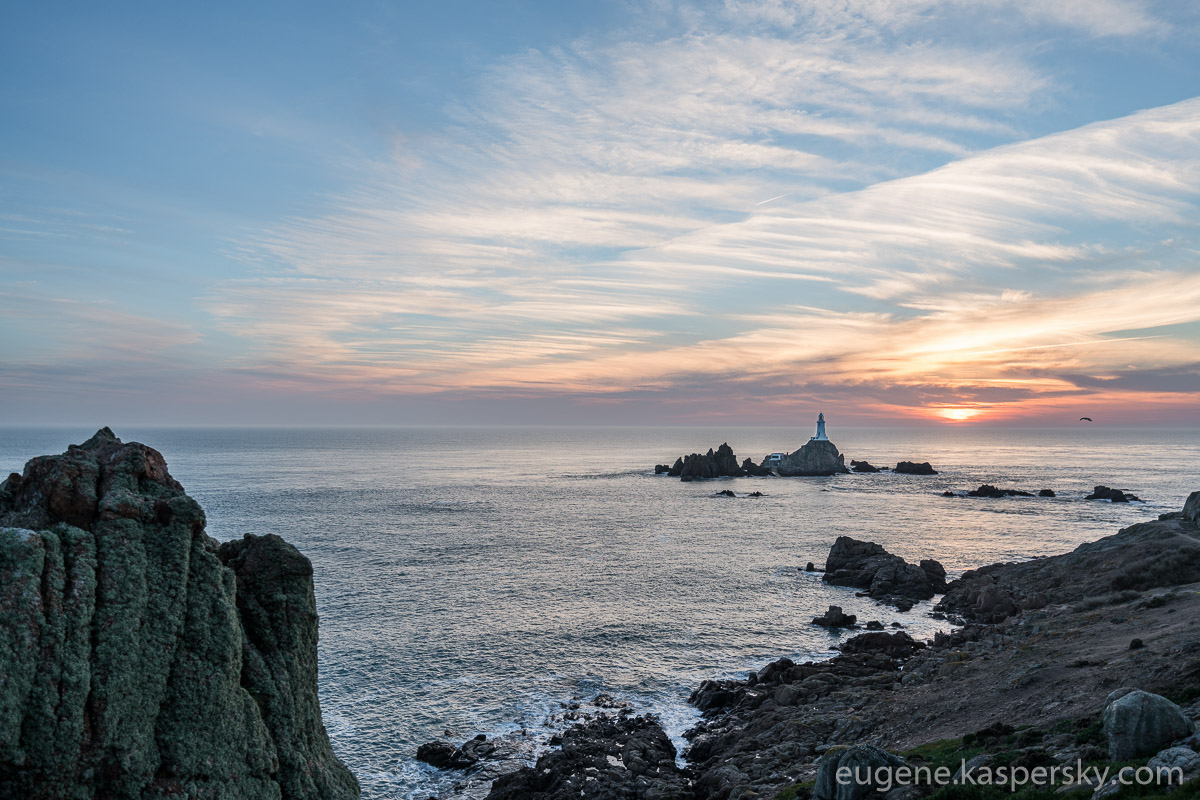 But anyway. You might be wondering what we were doing on Jersey. Of course – working; plus touristy bits added on, as always ). 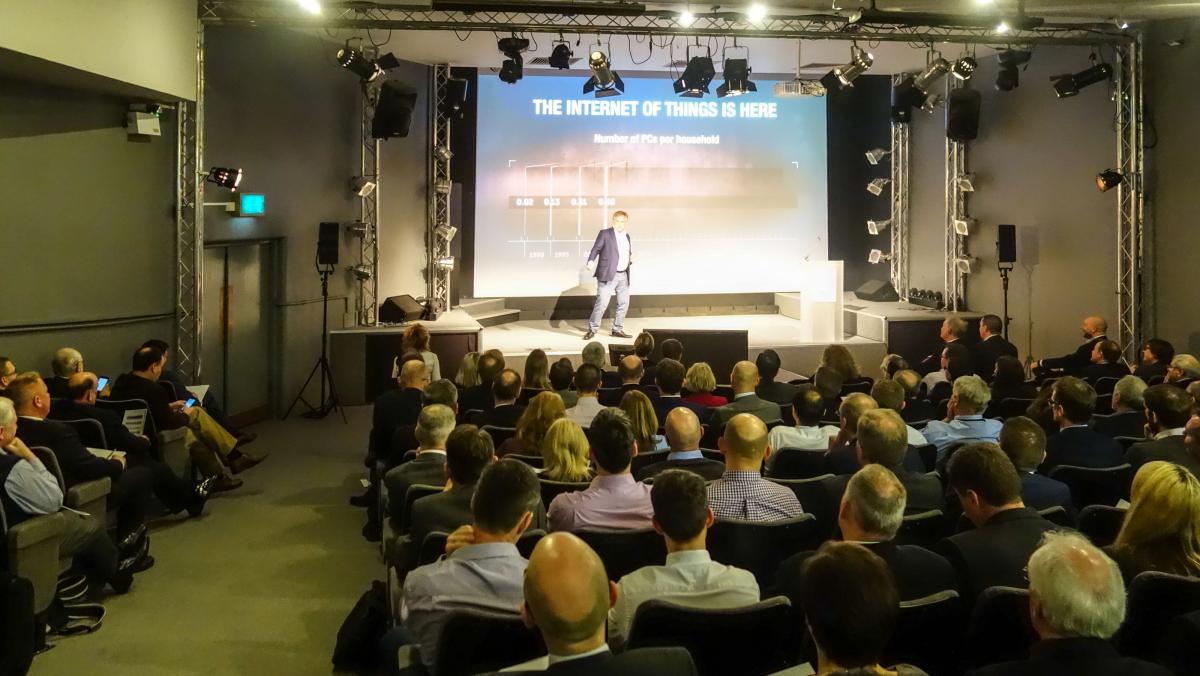 So, would you be able to point out Jersey on a map? Well if not here you go. 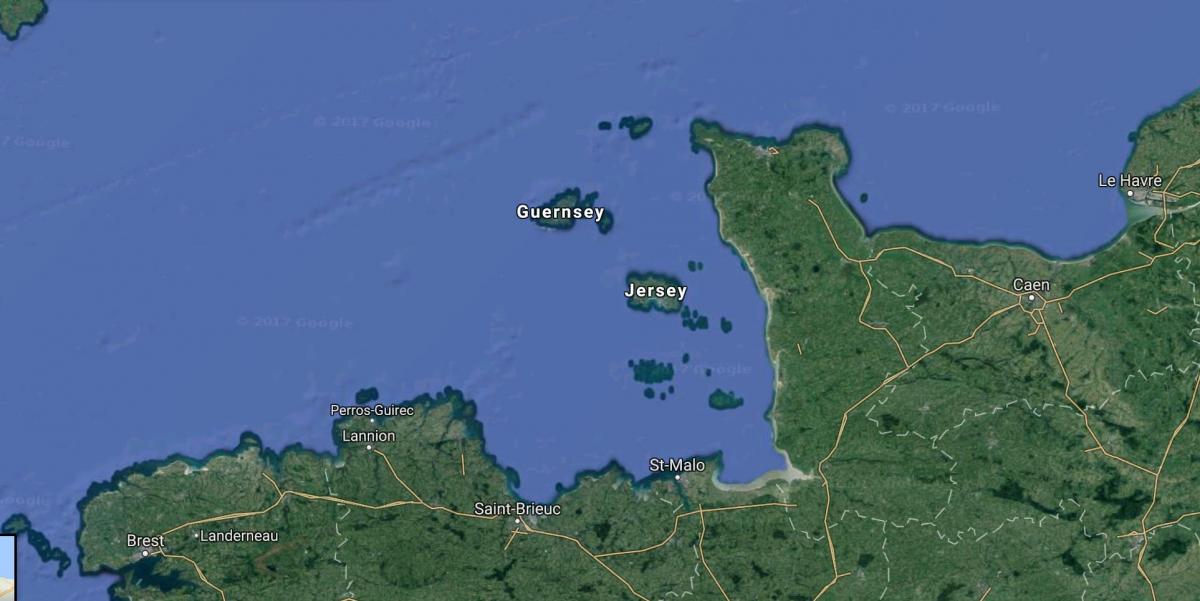 It’s only a small island, measuring around just 15 x 10 kilometers: 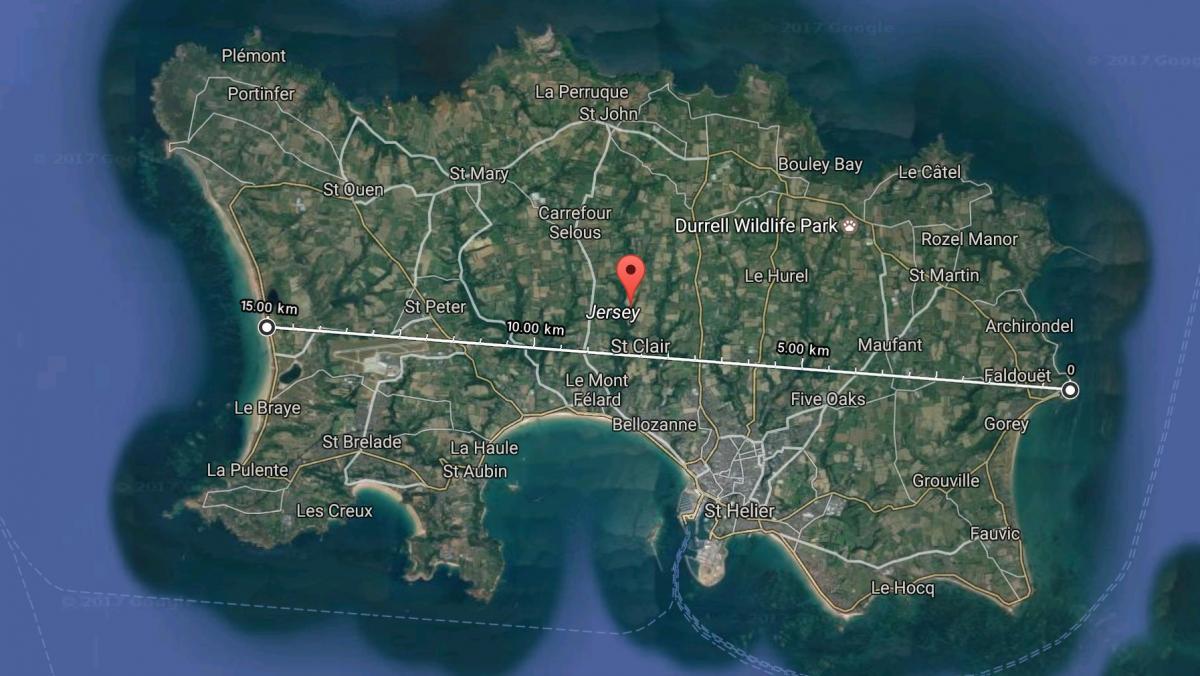 You can take a tour of the whole island on a bus, which stops at various especially scenic spots along the way; so that’s what we did until evening.

What can I say? A most… soothing island – one which encourages contemplation and meditation even (at least, perhaps, if you’re a tourist). Nice little houses, nice roads too, green fields, and neat gardens. Everything likable and pleasant, no one rushing anywhere, and warm (there are even palm trees here and there).

The names of many of the roads are in French. To be expected, I guess, given the proximity to France and a history similarly close to it.

We came across the ruins of 14th century fortress – Grosnez Castle, on the northwestern corner of the island:

The embankment here was built by the Germans during the WWII occupation – high up to ward off seaborne enemy attacks:

But the oldest historic relic here is the Neolithic ritual cave that is said to be around 6000 years old. Back then Jersey was still a peninsula off France. The tunnel was also an astronomic tool of the Neanderthals: when there was an equinox the sun’s rays would reach deep into the cave and light up these stones: 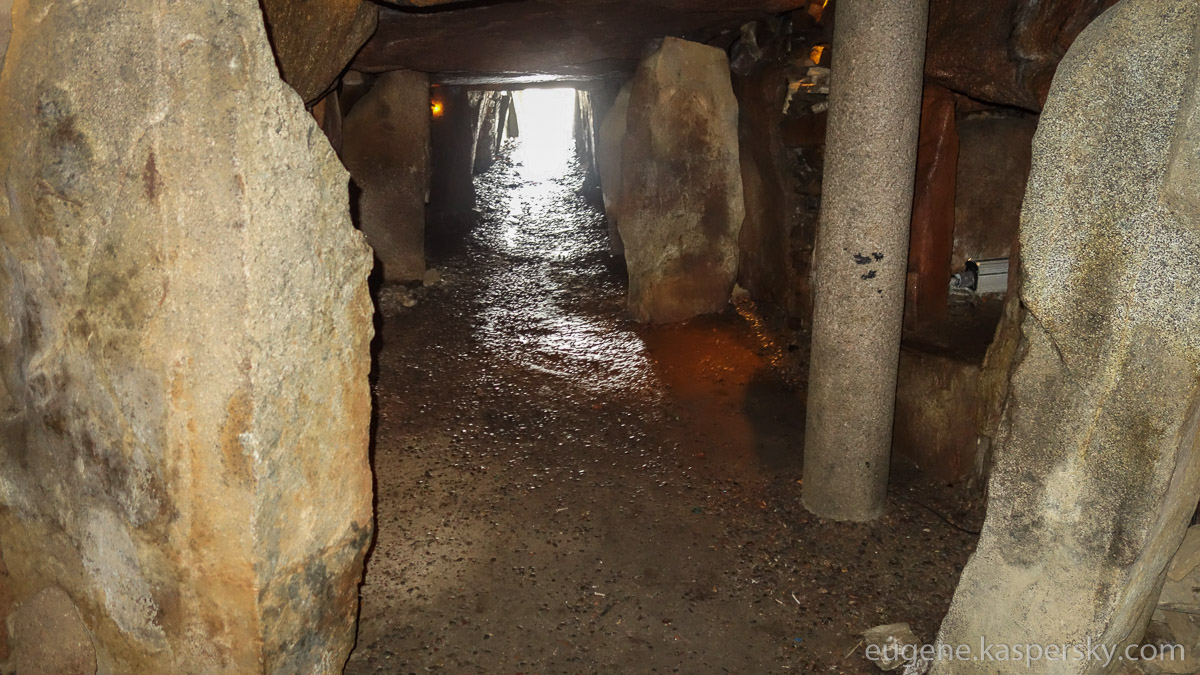 So, after this cave was unearthed around 100 years ago, the first equinox after it lit up its dark reaches once again – after thousands of years of total darkness!

There are 20th-century caves here too – bunkers, actually – from the Second World War:

And dotted around the whole island you come across occasional constructions of a distinctly military character and original purpose. Here, for example: 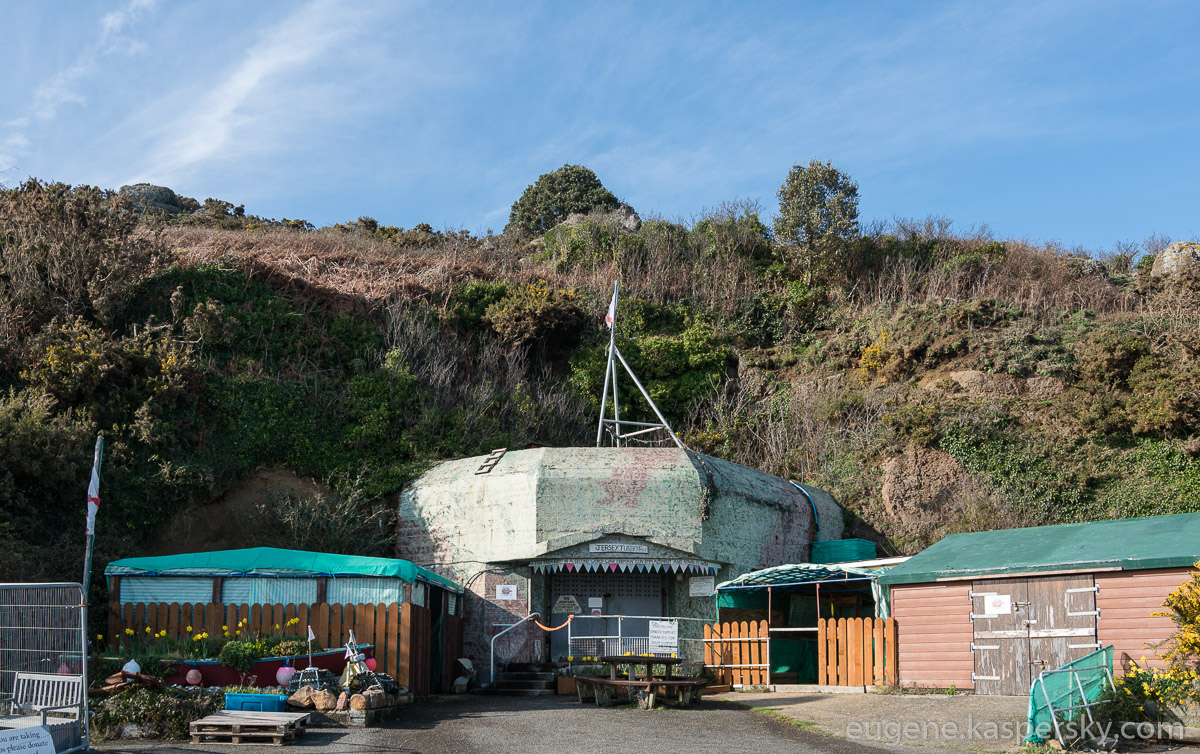 PS: I just have to mention the hotel manor we stayed: Longueville Manor. Classically olde-worlde and grandiose. Inside there was a smoky fragrance from the fireplace mixed in with that perhaps from the ancient wood paneling on the walls. And for the second time on Jersey I felt a certain spookiness – something indescribable, but nevertheless eerie. I was expecting to maybe see a ghost of the manor or something :-).

And that’s all from Jersey folks. Sunrise, breakkie, case, ferry, and on to the next port of call…

PPS: Quick shout-out to Jerseymilitarytours.je, and a big thank you too them too. In just a day we toured the whole island, ate our fill of oysters, meditated upon the scenery, and breathed nothing but clean sea air. A fantastic day! 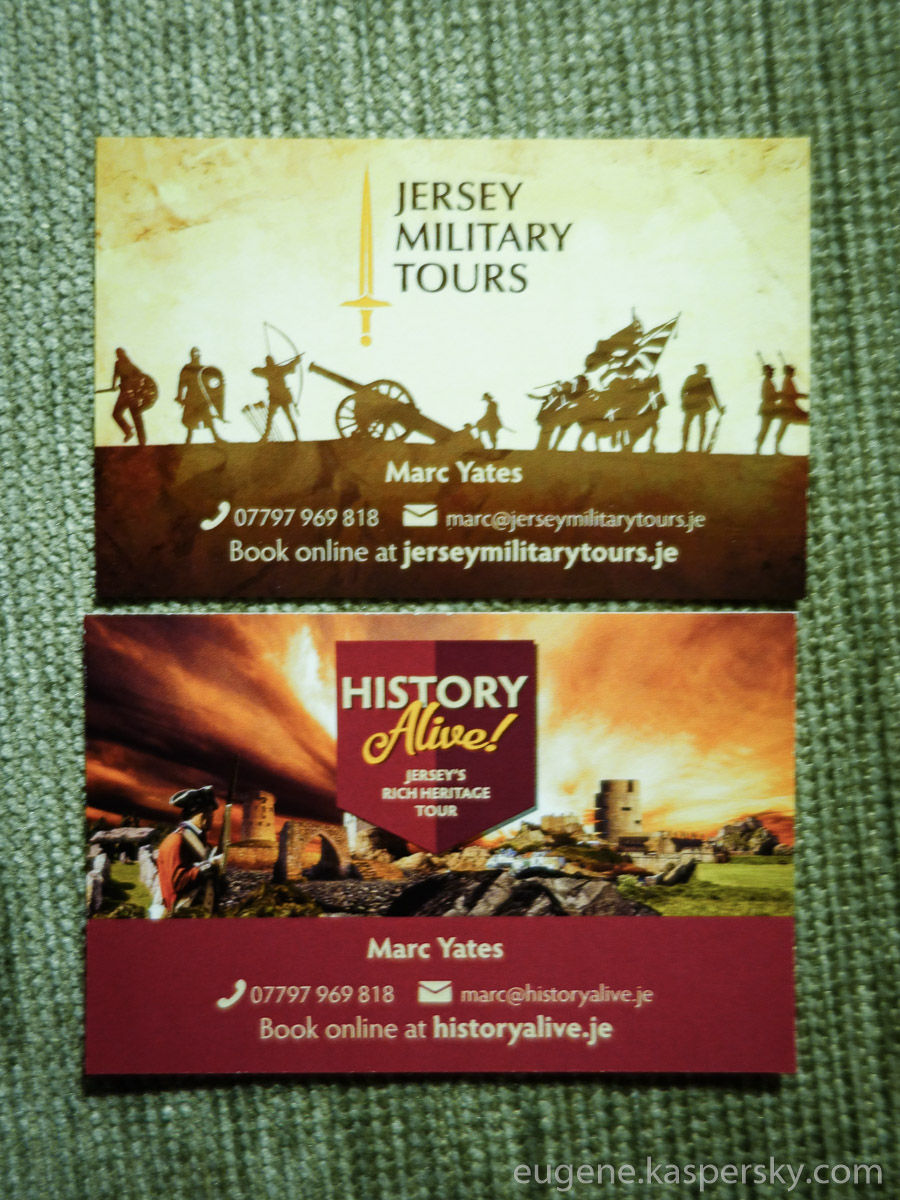