Hi folks – from the Bailiwick of Jersey, UK. Time for some touristic study of the history, ethnography, and other places and things of interest on this curious little island in the English Channel just a stone’s throw from France.

All righty. Before I get started here, er, could someone in the audience please tell me whether Jersey is an independent state or not? Why do ask? So I know whether I can add a +1 to my ‘been-to’ list of countries, of course!

The other reason I ask is that I couldn’t work it out for myself. I mean, WHAT?!: “[Jersey is] a Crown dependency of the United Kingdom, ruled by the Crown in right of Jersey. … Jersey was part of the Duchy of Normandy, whose dukes went on to become kings of England from 1066. After Normandy was lost by the kings of England in the 13th century, and the ducal title surrendered to France, Jersey and the other Channel Islands remained attached to the English crown. … Jersey is a self-governing parliamentary democracy under a constitutional monarchy, with its own financial, legal and judicial systems, and the power of self-determination.”!!!

Ok, I’ll just have to work it out by the feel of the place… And it sure does feel like the UK. The houses lining the roads, the signposts (all facing the wrong way:), the license plates (on cars driving on the wrong side of the road:), the open fire in the hotel, the cricket grounds, the fog, and the money with a Queen called Elizabeth on it… yep – sure all looks and feels like the UK to me. Curiously, one thing that doesn’t seem quite so typically British is the openness of the inhabitants and how easy it is to strike up a conversation with them! Or maybe it just seemed that way in the opaque atmosphere of existence here.

Jersey’s an interesting place. Regarding the economy, 40-50% (depending on who you ask) of its GDP comes from financial services. Regarding how it’s run government-wise it’s made up of 12 parishes, with each of them able to have its own laws and documents. For example, each parish issues its own driving licenses for a driver to be able to legally use its roads. If you cross a parish border – that’s two licenses you’ll need!! Fancy a drive round the whole island? Ouch!!

In terms of transportation Jersey is just… bizarre. With a population of just ~100,000, more than half a million folks fly in or out of the island’s airport in a year (on one of the 20 routes it offers). That is, in less than a month more land at or take off than the whole population of the island (including babies and the very old)! And that’s not because Jersey is a hub like, say, Dubai or Frankfurt Moscow. Oh, and many a worker and tourist also uses ferries from/to both the continent and the UK. Crikey. More travel options than you can shake an aircraft marshal’s baton at.

But I digress. Let me get back to talking about the main occupations on the island – those connected with money – lots of ). It turns out Jersey has quite a history regarding it. And it was this topic (and history) that we studied carefully in this here lovely country house:

One day, a little local lass was out walking in… the endless potato fields – as little lasses must. When she returned home she showed her mother a fist full of old silver coins, which had somehow come to the surface in aforementioned potato fields. Not long later metal detectors were used to scan the fields and… they found a lot more than a fist-full of silver coins; lots of gold jewelry too… 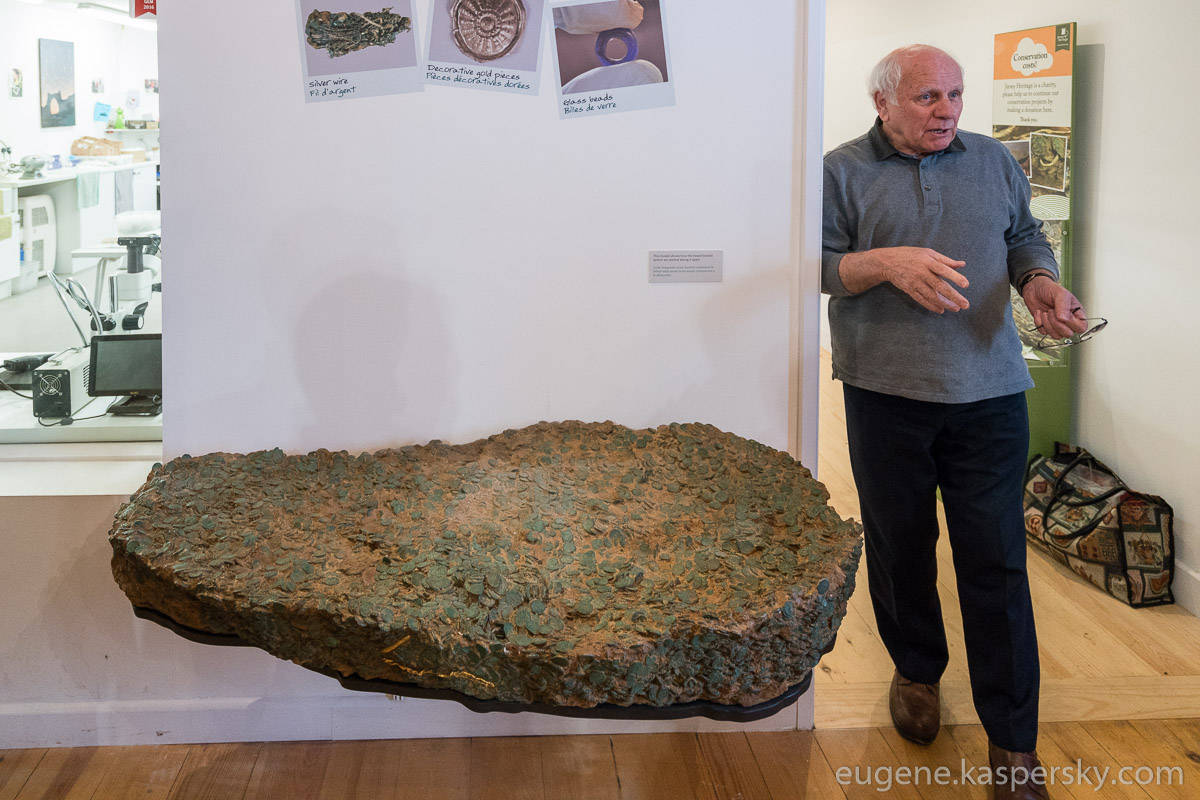 The timeline of events: 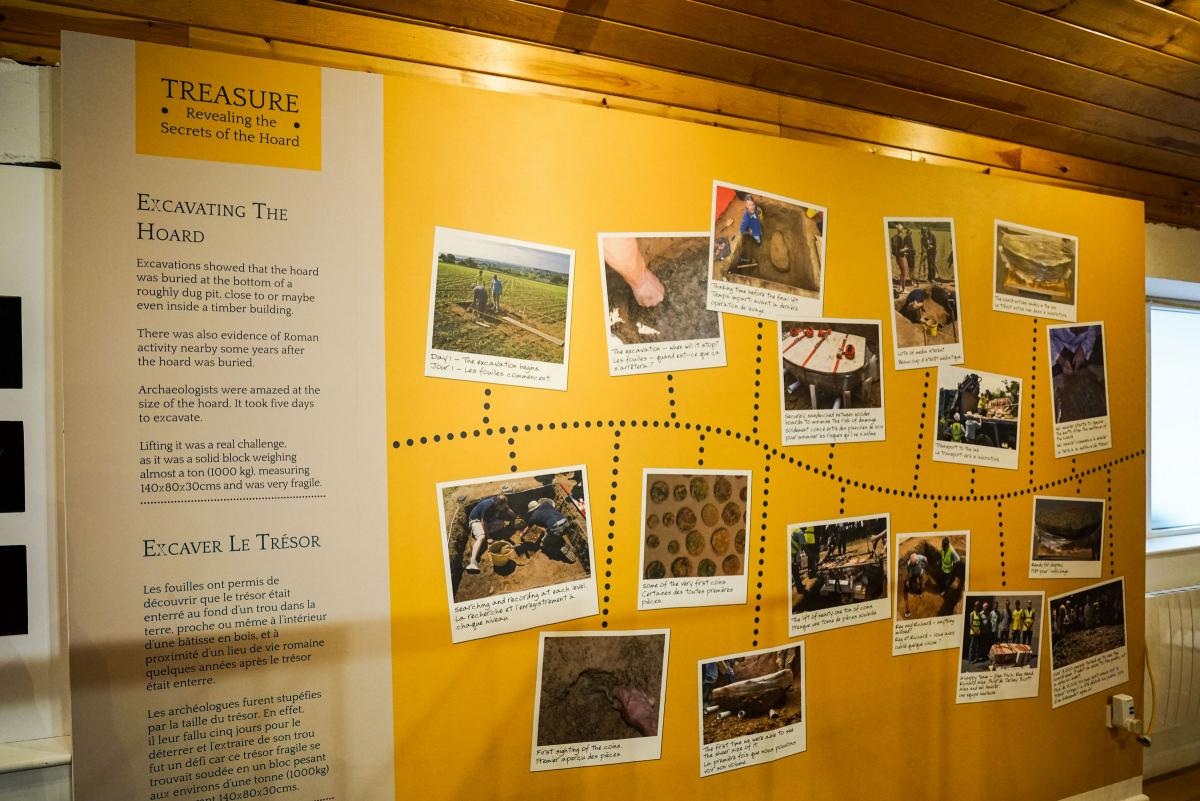 The find is referred to as the Grouville Hoard: around 70,000 late Iron Age and Roman coins.

The big lump in the photo above is a replica of the hoard. The coins in the original have now all been separated.

The hoard is around 2000 years old. But just look at the quality of the stamping. My word – amazing!

Jersey-archeologist sense of humor, including jokes at the expense of the Royal Family:

We were told how, because of the advancing Roman front, the percentage of silver in the coins was lessened, with copper making up for it. Nevertheless, the coins still look silver…

So yes. As you can see, the close association between money and Jersey isn’t just a modern phenomenon, which has now been confirmed by archeologists. In ancient times here there also worked minters, money-changers, money-lenders, brokers and other financial advisers. Like this one: 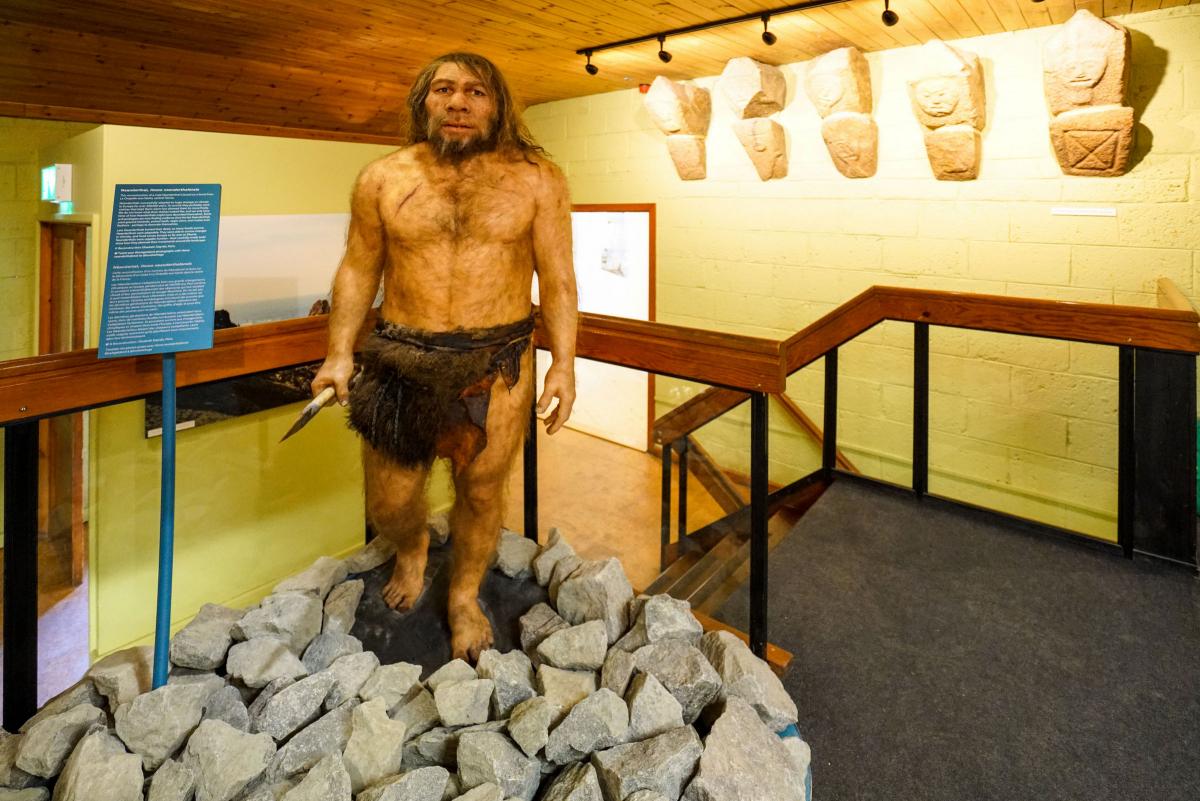 Joke. No, this is a Neanderthal. They lived here when Jersey was still a peninsula coming off the coast of Normandy! It’s said they probably were able to walk to the mainland without getting their feet wet!