Regular readers will have noticed I haven’t ranted and raved about patent trolls of late. What, all’s quiet on the troll front – they’ve stopped being trolls and started doing something useful and honest instead? You guessed it: no. Alas, every day, stories about their audaciously outrageous stunts can be found in the news if you look in the right places. It’s business as usual for the trolls; it just doesn’t make headline news.

Sometimes the news comes to you – at least, to us: just the other day we received a lawsuit from WETRO LAN for alleged infringement of a patent on filtration of data packets, or, to be more precise – a firewall. WHAT?

So, what they’re saying is, you can patent a widely-known, universally-applied device, er, which was invented more than a decade ago? Just in case you missed that: the tech had been around for ages BEFORE this patent appeared! And now they demand a fee for use of their patented tech! Hold on… WHAT?!

Yes that’s what they’re doing: since 2015 they’ve brought lawsuits to 60+ companies, many of which developed firewalls long before the patent existed. But the industry is taking the lawsuits in its stride; it even name the patent Stupid Patent of the Month.

Equally absurd is their targeting us with a claim. We’re not ‘easy pickings’ by far for an attack, since we always stand our ground and never give in to patent trolls. And we never settle out of court either – as there’s never anything to settle, as we ain’t done nuttin. The only thing we do is return fire occasionally. Well, why not? Their patents will be invalidated sooner rather than later – so we strike while the iron’s still hot there’s still an iron. And no matter what, we’ll continue the good fight – until the last bullet – their bullet.

But all this talk of fighting – no matter how necessary it is – it’s still a bit lot of a mood spoiler. So, to lighten the spirits and stay positive and optimistic, I decided to blow the dust off the archives to come up with a collection of the strangest, craziest, maddest and most paradoxical patents ever. If anything, just so you’ll know where they may bite you in the future for ‘gross violations of patent law’ :).

The Superlatively Subjective Top-5 Most [insert the appropriate] Patents Ever

No. 5: The guillotine – the best remedy for a headache.

Warm, sunny, summer weather has its downside. Of course, summer should be all about the beach, pinacoladas and swimsuits, but for that one has to be in good shape. But how can one be in good shape after a fall, winter and spring of non-stop gorging on high-calorie foods? One simply can’t! Well, one could – with a decent diet and exercise – but how unoriginal and folksy and old-fashioned is that? There had to be a hi-tech solution; after all, the 21st century was just around the corner. Therefore… 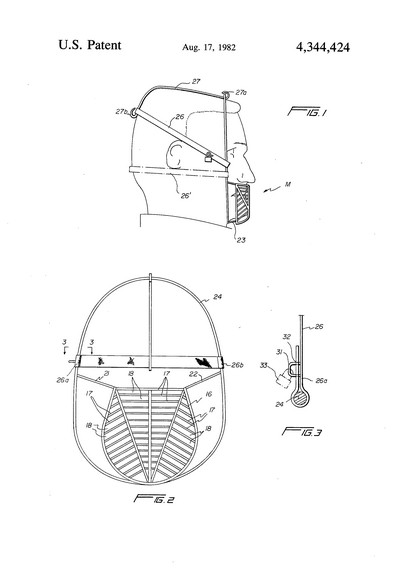 PS: Makes sense to ‘invent’ and patent anti-eating handcuffs too – to chain you to the radiator with so you can’t reach the fridge. In just two weeks you’d have that beach-bod you’d been after :). 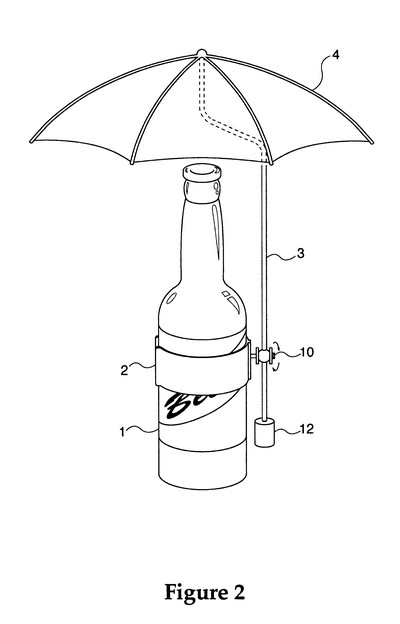 This device is supposed to keep the sun off your beer, while also being suitable for advertising purposes.

Objection No. 1: Instead of thinking about leaving your beer in the sun long enough for it to get warm – it should be drunk quickly. Hello?

Objection No. 2: the beerbrella clearly actually warms the beer by its being attached to it, as it slows the process of imbibing it. Yoo-hoo, anyone home?

Objection No. 3: I wouldn’t take any notice of any advertisement placed on ta beerbrella; no – I’d willfully boycott whatever was advertised there.

So, what do you think? I’m being too harsh? Any ‘fans’ out there?

PS: I wonder – if you were to make, say, a meadbrella, would that violate the patent?

Judging by the picture below, you’d be forgiven for thinking that patent 5443036 describes some kinda Jedi method for hunting alien creatures; however, this device turns out to have a much more humane purpose – and a global aim. 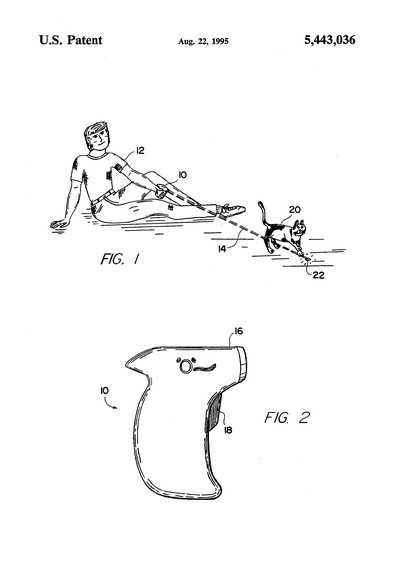 PS: Laser pointers need to be invented quick – for hamsters, rabbits, and every other type of animal on the planet, no?

Phew! Humanity saved. The world must have seemed so perilous before this invention… 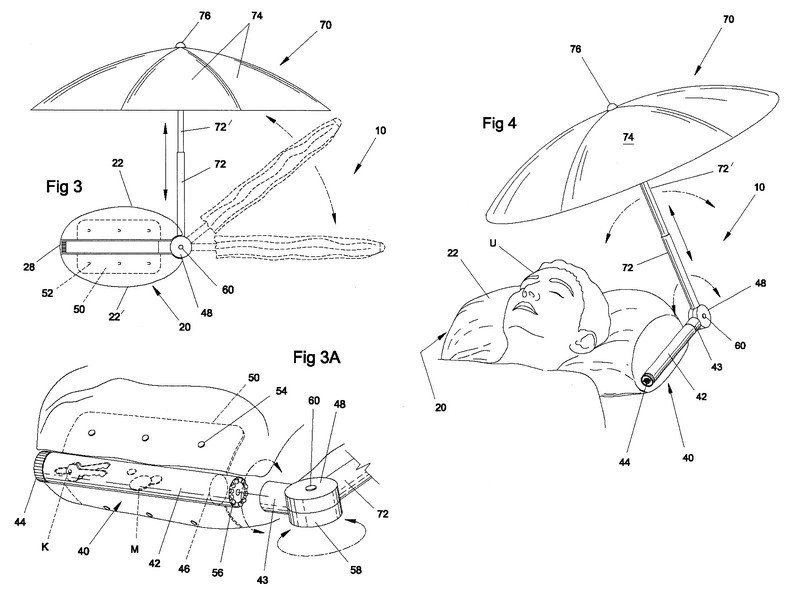 Patent 6711769 combines a pillow and an umbrella to shield the face from the sun in case you fancy 40-winks on the beach. But it only covers the face. Accordingly – there remain hazards to such a dangerous beach activity as taking 40-winks, even if you use this invention properly: 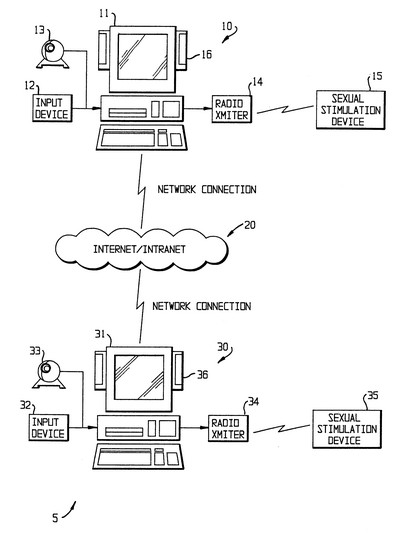 Oh yes. This diagram depicts a ‘method and device for interactive virtual control of sexual aids using digital computer networks’. I kid you not; this is real folks! Remote… intimate interaction is here! Users install the connection using special applications, plug into the computer various… control devices, and… interface with one another.

I can just see the court proceedings on this one, with the lawyers, judge and jury trying to keep straight faces. But try they must: the patent owner has brought six lawsuits already for infringement. 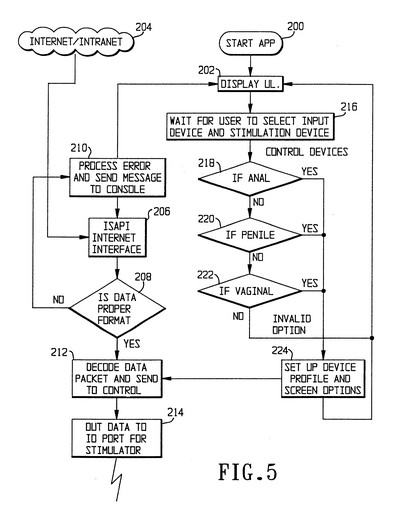 Bonus track: Shooting oneself in the foot – on a yoga mat.

Here’s an example of how folks strive for patents for ‘wonder-tech’, not even aware they’re going about it all wrong – not taking into account the simplest of considerations.

Meet 8605152 – ‘Method and apparatus for yoga class imaging and streaming’.

The formula gives the positions of the instructor, the pupils and the video cameras, giving the following: 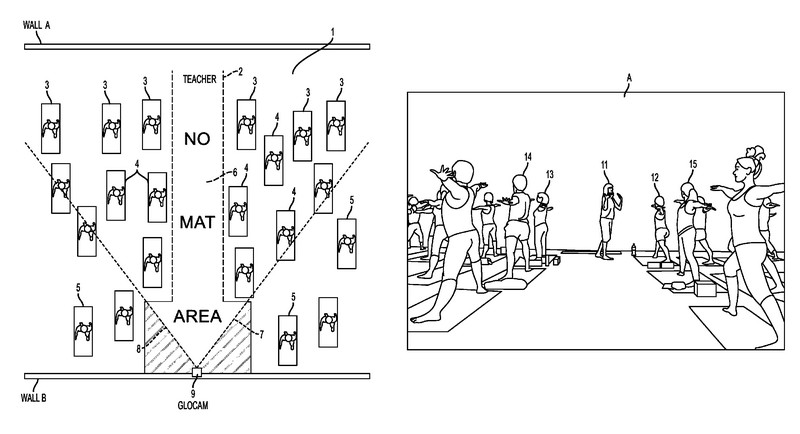 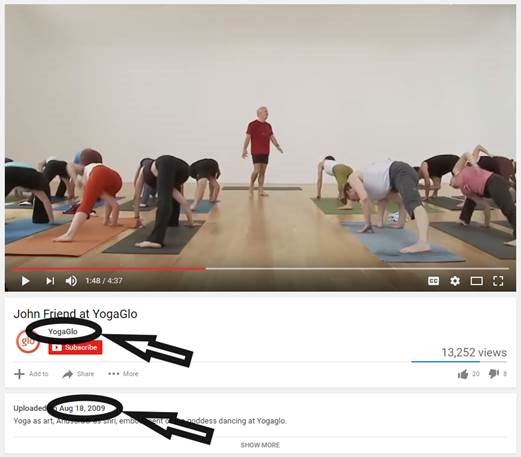 All anyone who gets targeted with a lawsuit would have to do is refer to the YouTube vids of the patent holder itself. Durr.

So, why is it that ‘inventors’ go to such absurd lengths to patent their ‘inventions’? To put on their resume? To be able to tick off another life achievement? To increase the value of their business? For something else? Useless, contradictory patents that eat up millions of dollars and millions of working hours – all for nothing, all just a waste? Why? Why, when all it takes is one look to understand the authors need sending to the loony bin? WHY?

On the other hand, it is possible to open the patent database and use its contents for a fun themed get-together on a Friday night with friends and beers – without beerbrellas. Maybe that’s why…