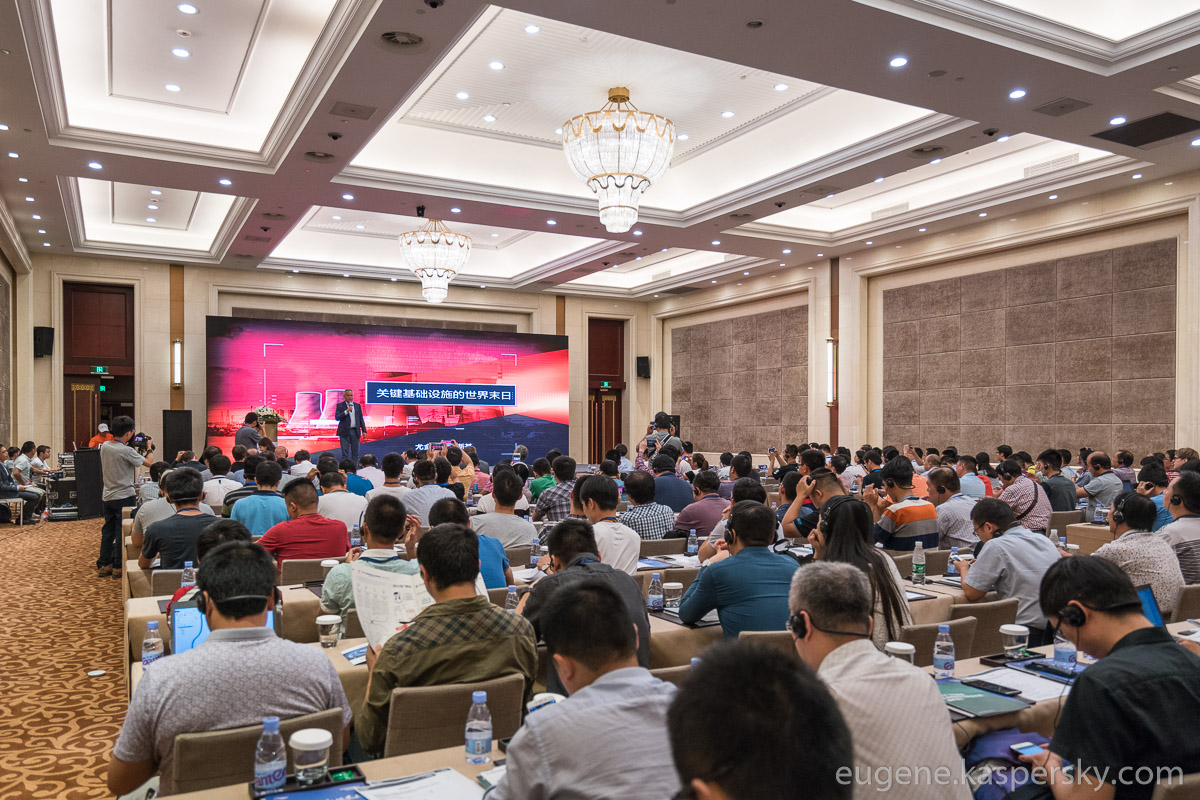 …Or appearing in front of the cameras… 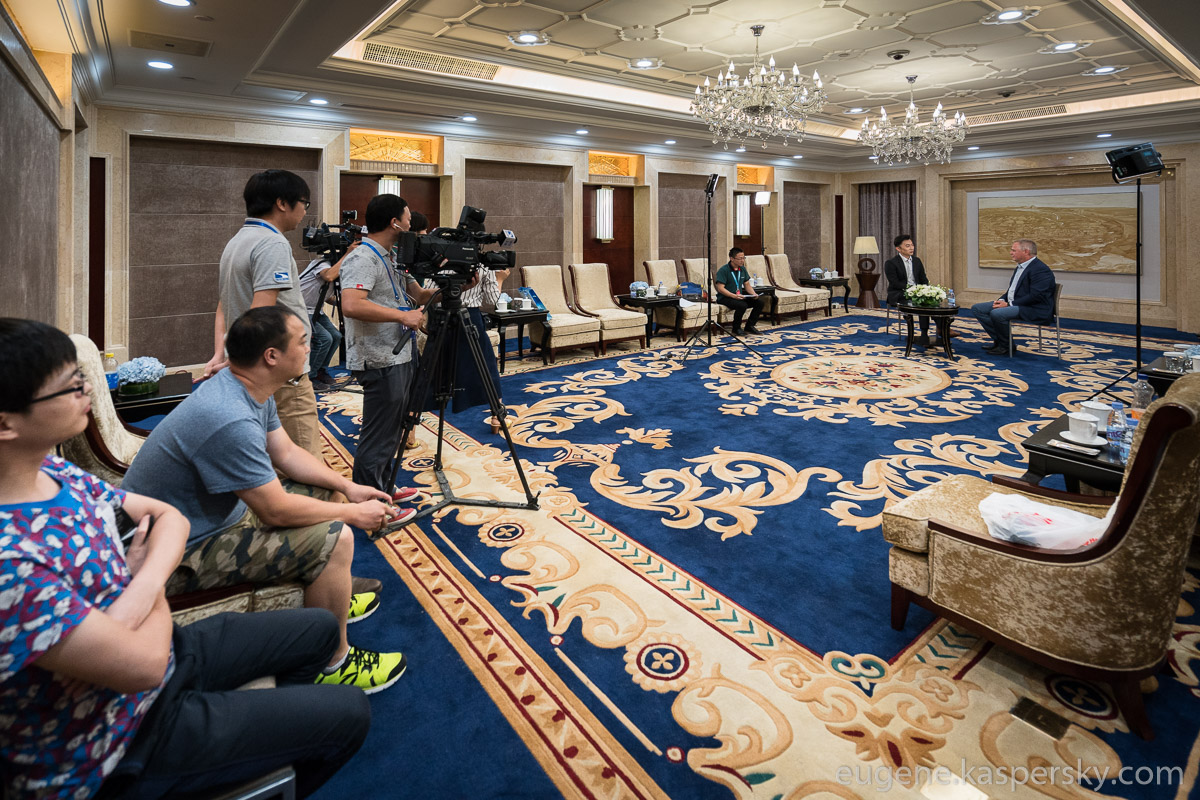 We also broadcast our own Industrial Cyber Security stream. Plus took part in the exhibition:

For sure, Wuhan is not Beijing, not Hong Kong, not Shanghai, and not even Chengdu in terms of size. So, like, just how do they fill out a huge exhibition hall like this one here, which it would be tough to see busy in those mentioned larger cities? In Wuhan there’s a simple solution: bring in the students and schoolkids – en masse! It seemed as if all the schools and colleges in the region had an excursion to the world of cybersecurity the day we were there :).

Here are the visitors standing in long lines to get into the exhibition: 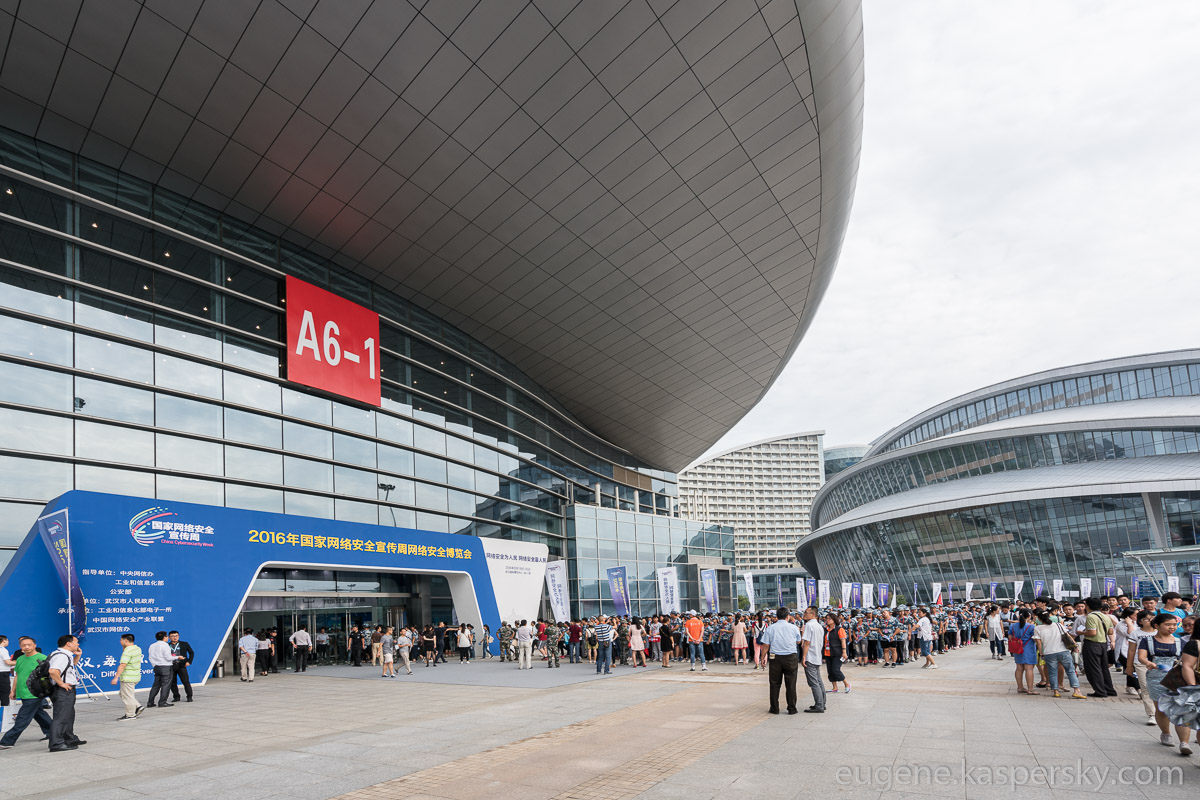 The exhibition center here really is something. Hannover Messe, of course, is bigger, but that was built up over many years (curious about comparing sizes of exhibitions centers around the world? The Internet’s the place for you:). In Wuhan everything appeared very quickly, and everything is brand new – in fact just finished. You can tell by looking at the place (spotless and shiny) and also from the smells – our hotel next door clearly wasn’t given time to air itself after its construction and fitting up before it was opened to the public!

We would have liked to have stayed at the exhibition for longer, but as often happens we needed to be somewhere else – fast. Fast? In that case – time to take the train!…

This was the first time I’d traveled on a Chinese train! (Ok, I’d been on the Shanghai Maglev  before, but that’s not quite a ‘proper’ train:). These days China boasts a huge high-speed rail network. Their goal was for folks ‘to be able to go from any city to any other city in the country by rail, both comfortably and quickly’. And I think they reached their goal. Oh, I’ve forgotten how they calculate the total lengths of railroads – by summed length of tracks or the number of tracks and sleepers? But anyway, the Chinese rail network leaves that of Russia way behind in terms of total length (no matter how it’s worked out), despite China being half the size of Russia.

Both the stations and trains in China are very convenient and comfortable; Ok, apart from one thing, to someone who knows scant little Chinese – a lack of signs in English… 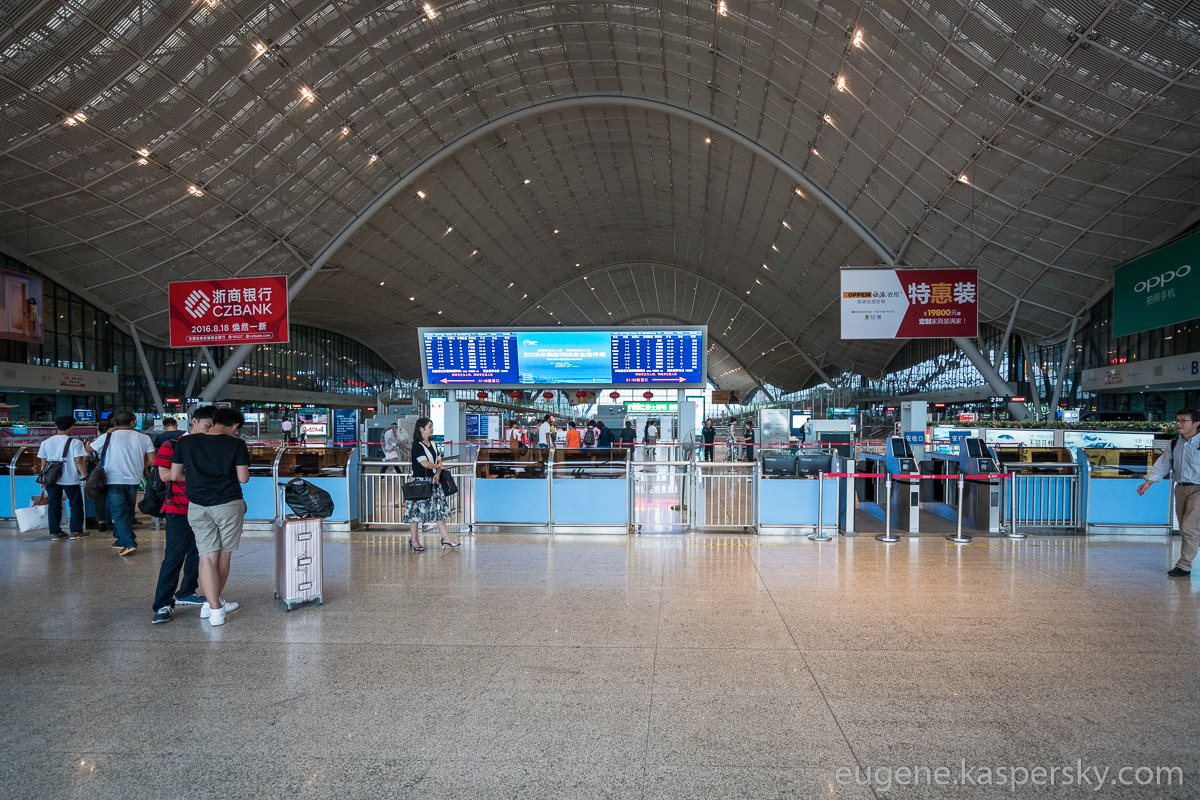 The symbols in red at the bottom of the board, btw, state: ‘Security of Internet for the people, security of the Internet, supported by the people’ :). 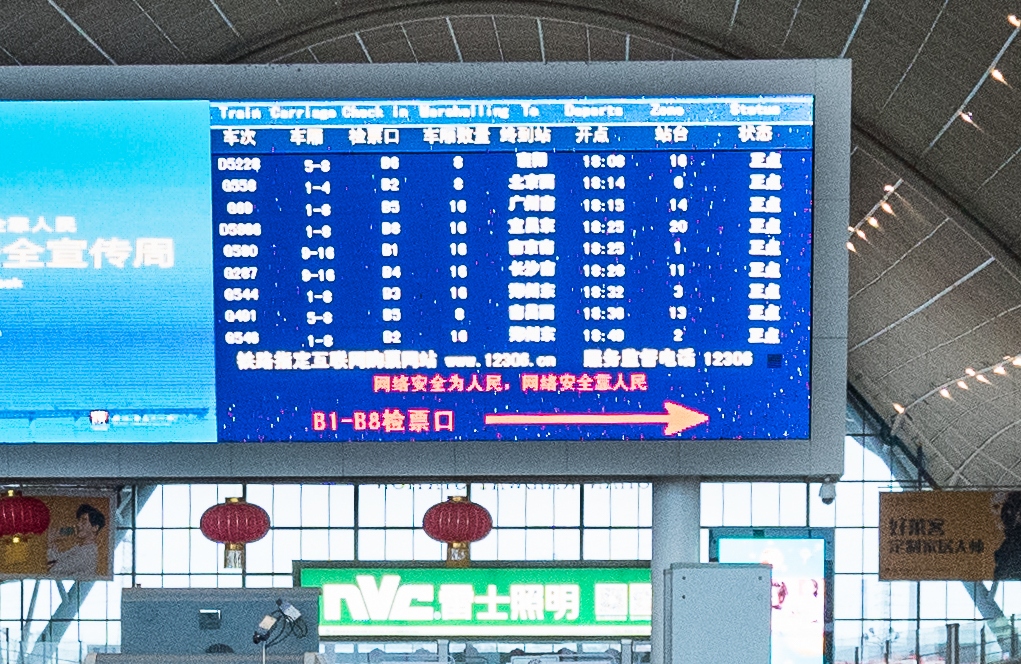 Here’s the station (the waiting zone on the second floor)… of a ‘sub-provincial city’ :).

Here are some amazed tourists, who thought incredible immensity was the preserve of just Chinese airports :).

Here’s the first class carriage. As you can see, the seats are almost like in business class on a long-haul plane; they even recline back to form a flat bed: 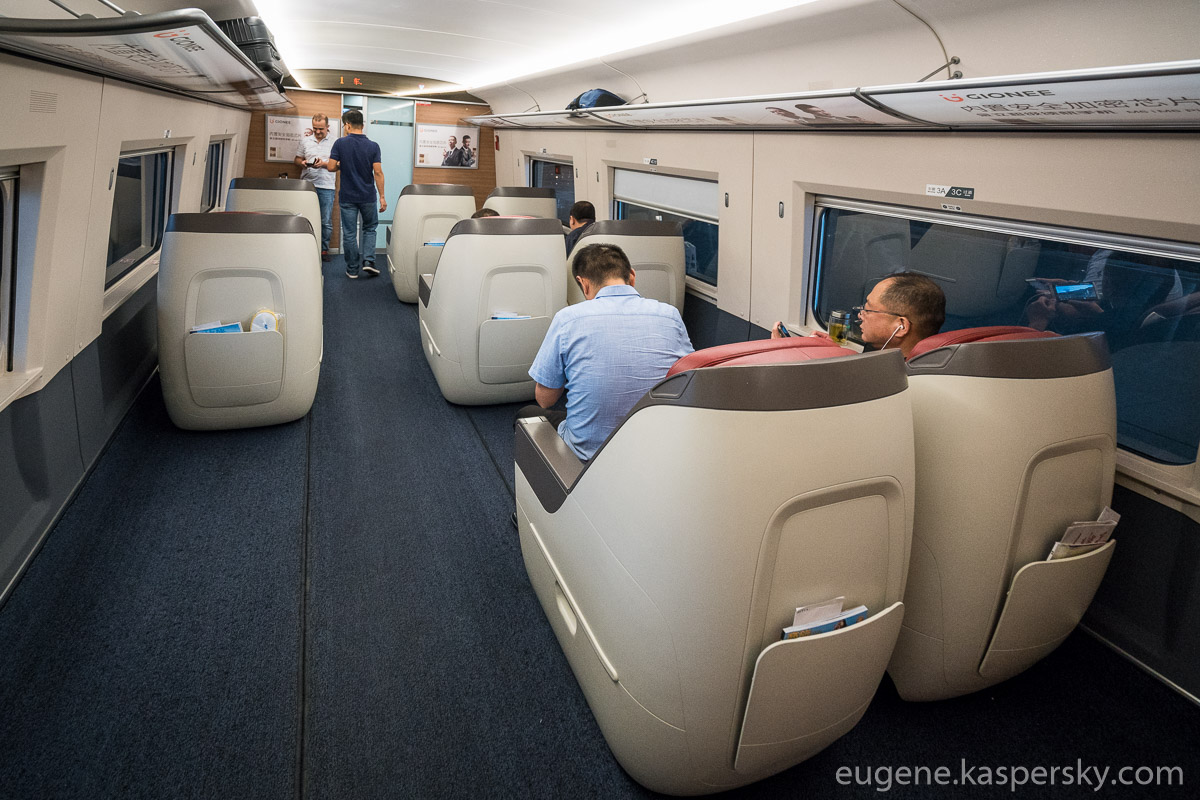 There was no Internet (maybe there is on other routes), but an electric socket was present. 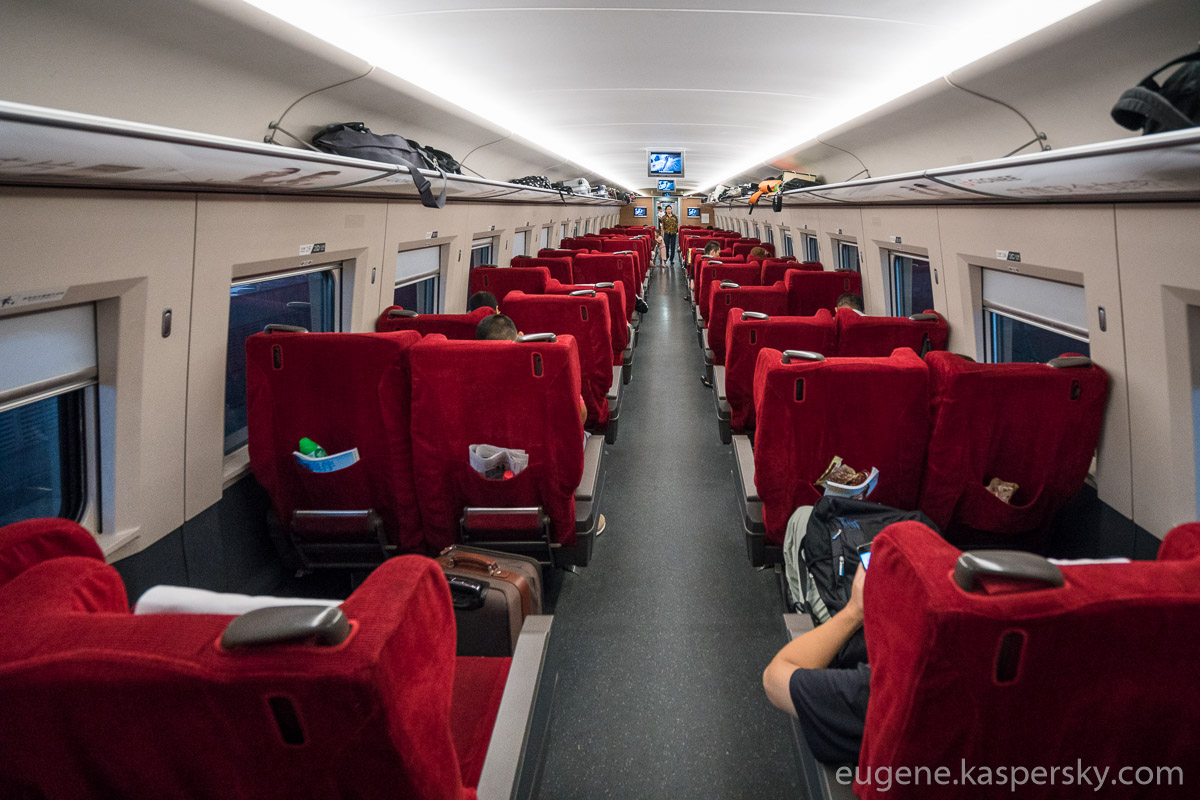 Economy class is about the same, but the seats are set out three + three. All seats face forward. When they get to the end of the line they switch them round!

The train’s not all that quick – around 200km/h (Japanese and Spanish go faster), but it doesn’t rock about at all. Very comfortable indeed. Need to take the train more often in China :). 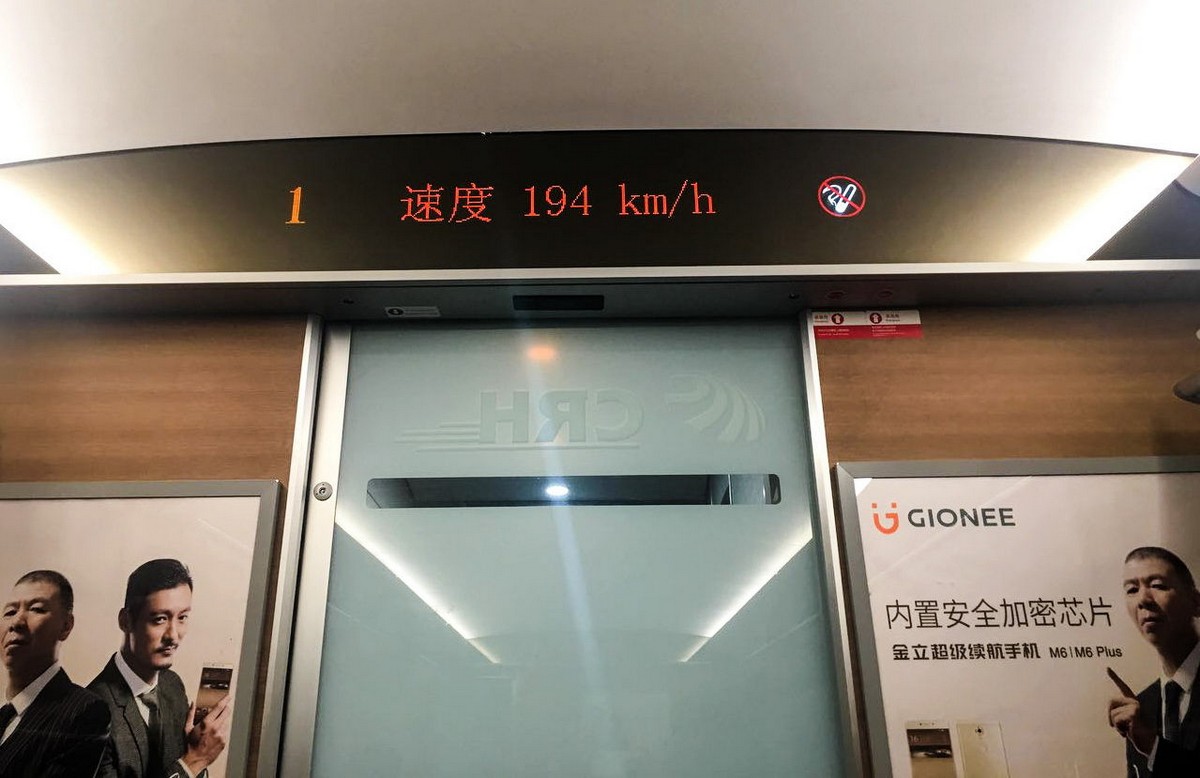