I’d heard many good things about Sochi on the whole, and Krasnaya Polyana in particular, but still: nothing beats seeing it for oneself. That’s right: for some odd reason I’d never properly visited Sochi. Ok, I was here briefly two years ago for the Formula-1, but I only got to see the racing track and Olympic Park.

This time, despite a typically busy business schedule in the city, I got to take in the sights and sounds of the place, and even got a bit of hill-trekking in. And, ohhhh boy, was I glad that I did! For here in Sochi I was pleasantly surprised astounded by how cool the place is. I simply couldn’t believe this was a Russian seaside town on the Black Sea. How things have improved been transformed!

Krasnaya Polyana also bowled me over with its spaciousness, modernity, shininess (newness), wide embankments and contented pedestrians strolling along the riverbank.

To be honest, I can’t think of any other ski resort town, including those in the Alps, that looks as… comfortable as Krasnaya Polyana. After all, in Europe most ski resorts were originally farming villages, which over the years were transformed into skiing towns; whereas here, practically everything was built from scratch. And not a bad job they did too. 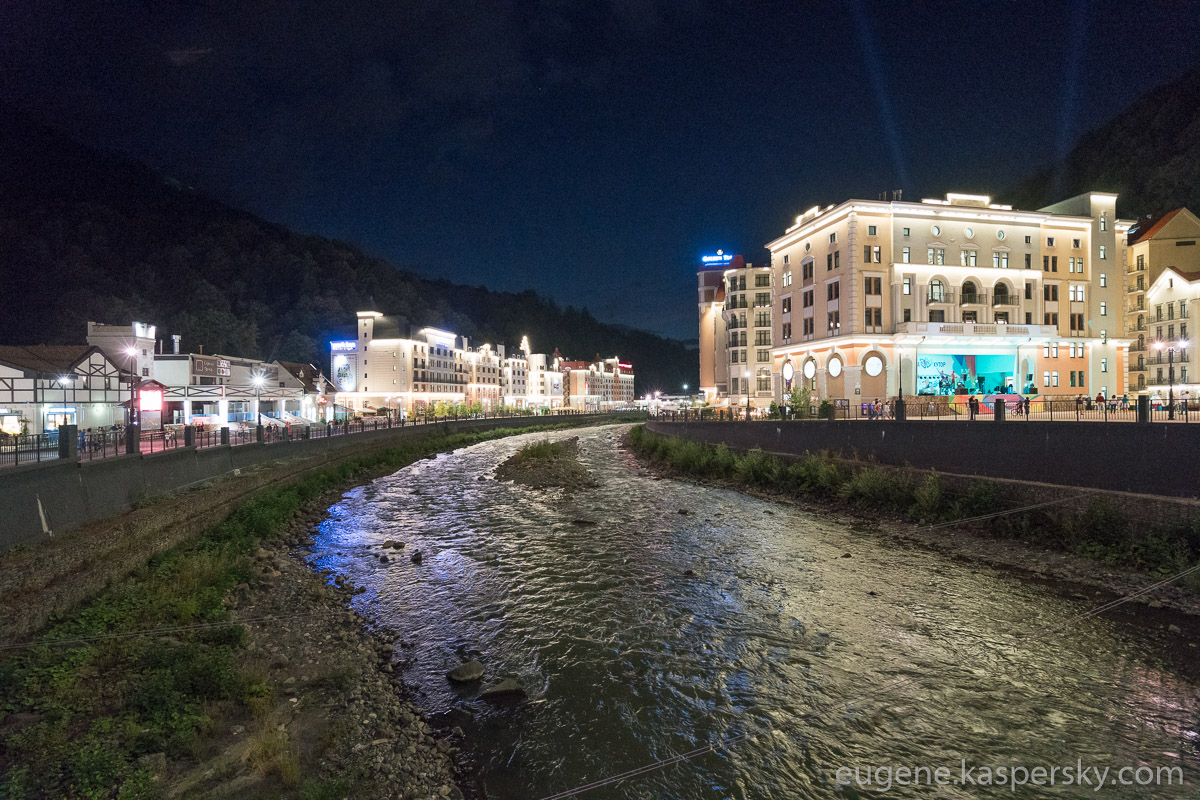 There was only one missing item on the streets that allowed you to determine we weren’t in Monaco – the occasional Ferrari/Lamborghini. But then, they say they’re building a casino here, so maybe soon there’ll be no difference at all between the two places!

Krasnaya Polyana itself is a mere 500 meters about sea level. The ski slopes are much higher up in the mountains above. This unusual combination, we were told, means that sometimes there can be good skiing snow up above, while down in Krasnaya Polyana it can be sunny, warm and almost subtropical! So, by day, skiers will be in all their warm skiing thermals, while come evening they’ll be in jeans, shirts and maybe a light jacket, sat at a café along the riverbank. They also say that the skiing season lasts almost to the end of May – when the water in the sea warms up a touch. So, again, good bizarreness: by day – skiing; by evening – a dip in the sea!

Another tidbit of inside knowledge: they say that ‘fresh snow has fallen up in the mountains’ is a perfectly reasonable excuse not to turn up for work – maybe for a day or two!

// Therefore, we won’t be opening an office in Sochi! I have to admit that I once dreamed of making Sochi our own techno-park, but having learned about this sloth-friendly peculiarity of the place – er, no thank you! We’ve got work to do! Lots of it! Can’t be having folks not turning up for days on because of a light dusting of snow!

Ah yes. There’s a conference hall here that seats 1000 bottoms. Got me thinking: ok, we may never move our operation down here – ever, but at least I could fulfill another long-held dream of mine: to have a conference in a ski resort. Work for an hour or two up on stage, and then step outside and get some snowboarding in. Yeh! I mean, where else can you find a such roomy business facilities in a ski resort? Ah yes; there is one place – a small town called Davos. But still, that’s only two: Davos and Sochi, and that’s it.

So we checked out prices on the Internet for hotels and conf-facilities. Another pleasant surprise: there’s something for every purse – from bargain-basement to the rich-&-ritzy. Only problem is – no vacancies! Everything fully booked up – confirmed by the many folks to be seen walking around. And not only Krasnaya Polyana but Sochi too!

There are plenty of mountains to be climbed here: the views are amazing, the paths are mostly good, the signposts are sufficient, and there are also good maps with routes.

The only downside is that some of the paths are littered with garbage. Plastic bottles, candy wrappers and cigarette butts dot the routes, and in a few places we saw whole piles of plastic waste. But it’s just the occasional rubbish-fest that let’s things down. On the whole, it’s clean and tidy and well worthy of a lot of trekking, even for a few or several days in tents. But this time, we (my travel companion A.B. and I) had to limit ourselves to a few hours strolling – and snapping.

Not far from Krasnaya Polyana there’s a totally unique attraction for the not-too faint of heart: Skypark suspension bridge. Apparently it’s the longest pedestrian suspension bridge in the world. At 439 meters wide I can believe it. Whoa: 207 meters above the river below!

Once you get to the other side it’s time to about-turn and walk all the way back. And it gently rocks – both from the wind and the tourists walking across it. 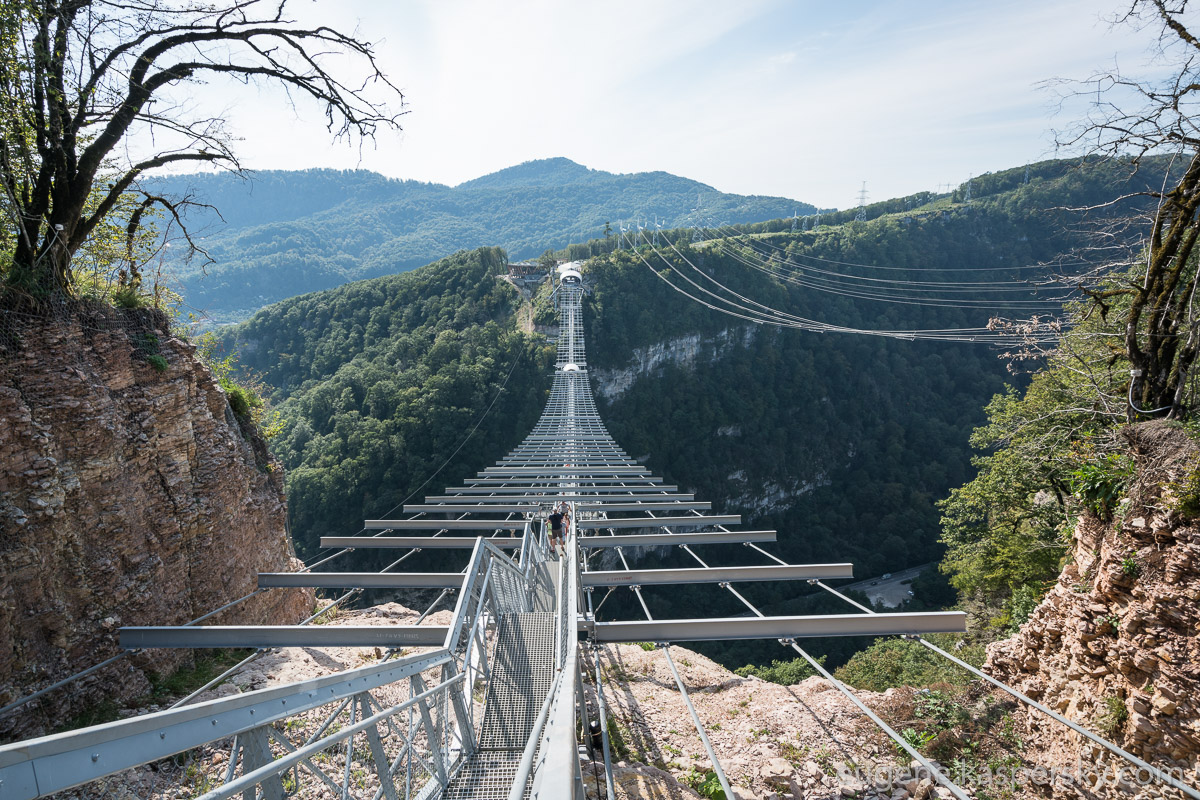 The views from the bridge are fantastic; just as well, looking directly down can be a bit scary :). 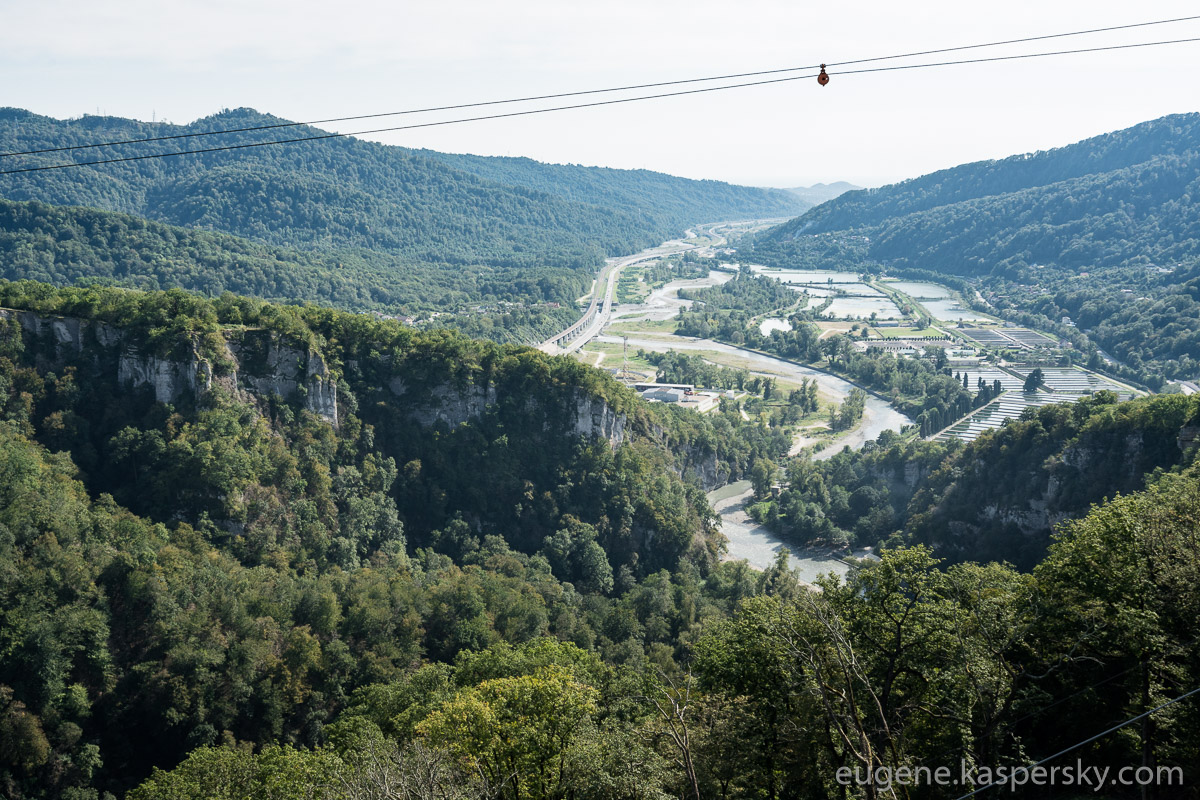 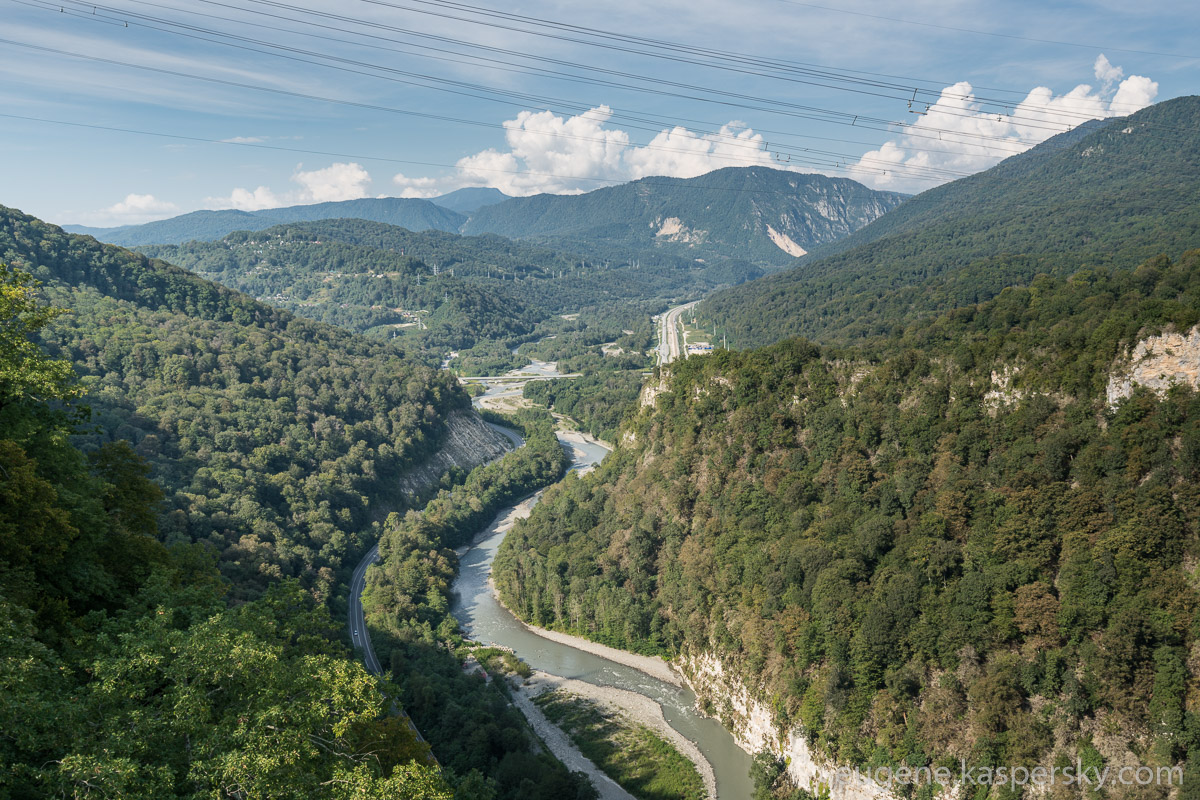 The bridge itself is awesome too!

Here’s where you can jump off the bridge! 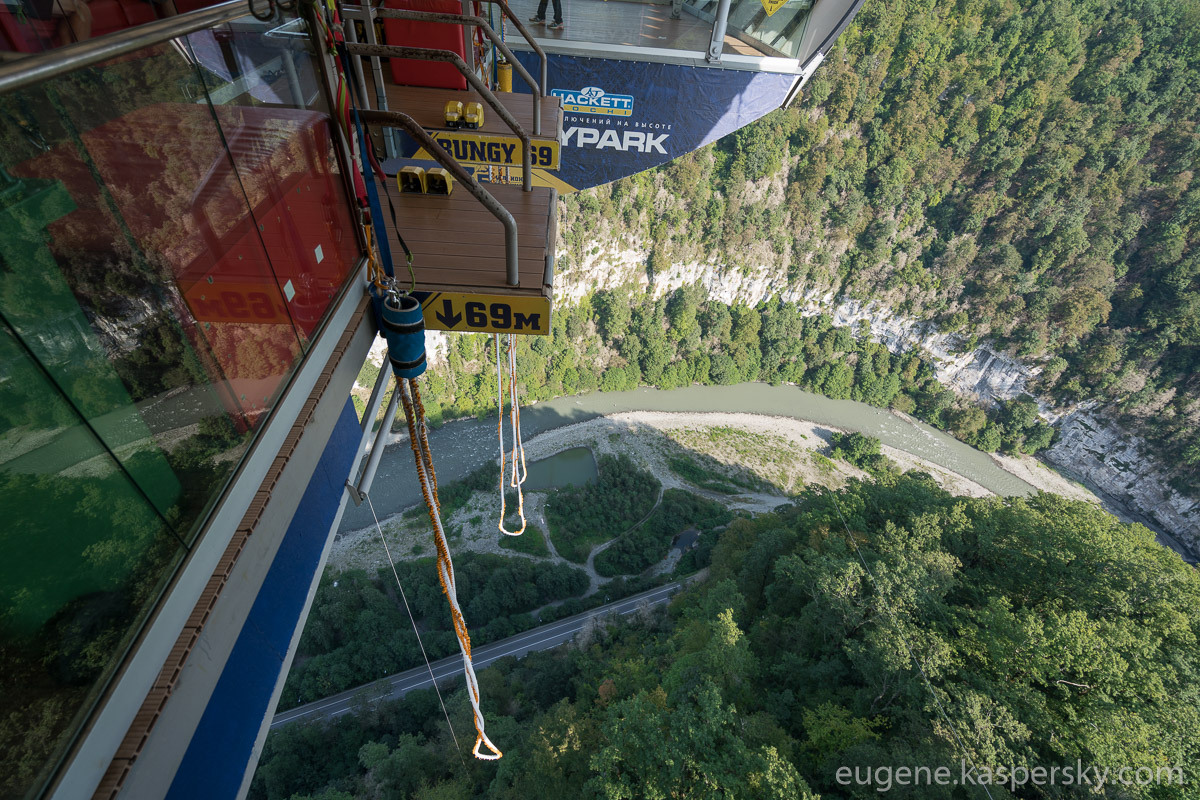 Instead of bungy-ing down, there’s also a 170-meter-long cable you can slide down: 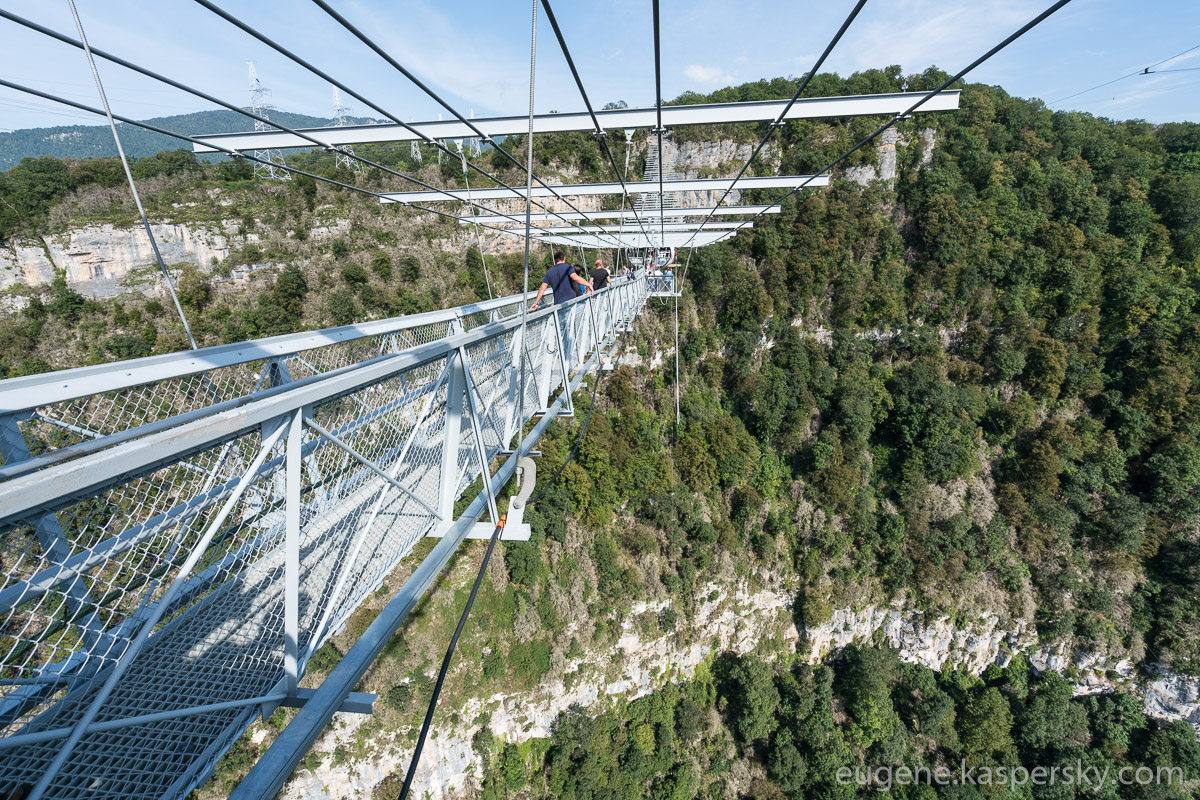 It’s 207 meters down to the river, while a bungy-er only goes down around 180 meters. Once he/she eventually comes to a stop, they have to unfasten a rope to turn themselves down-side-up, and then they get pulled back up to the bridge. They say it’s safe of course, but I still found it hard to even look!

Btw, we were here for our annual Russian partner conference. Work hard, play hard – all the way: nice.

Back at Sheremetyevo we parked up next to this aircraft, as if hinting on the next leg of my current multi-stop business trip… 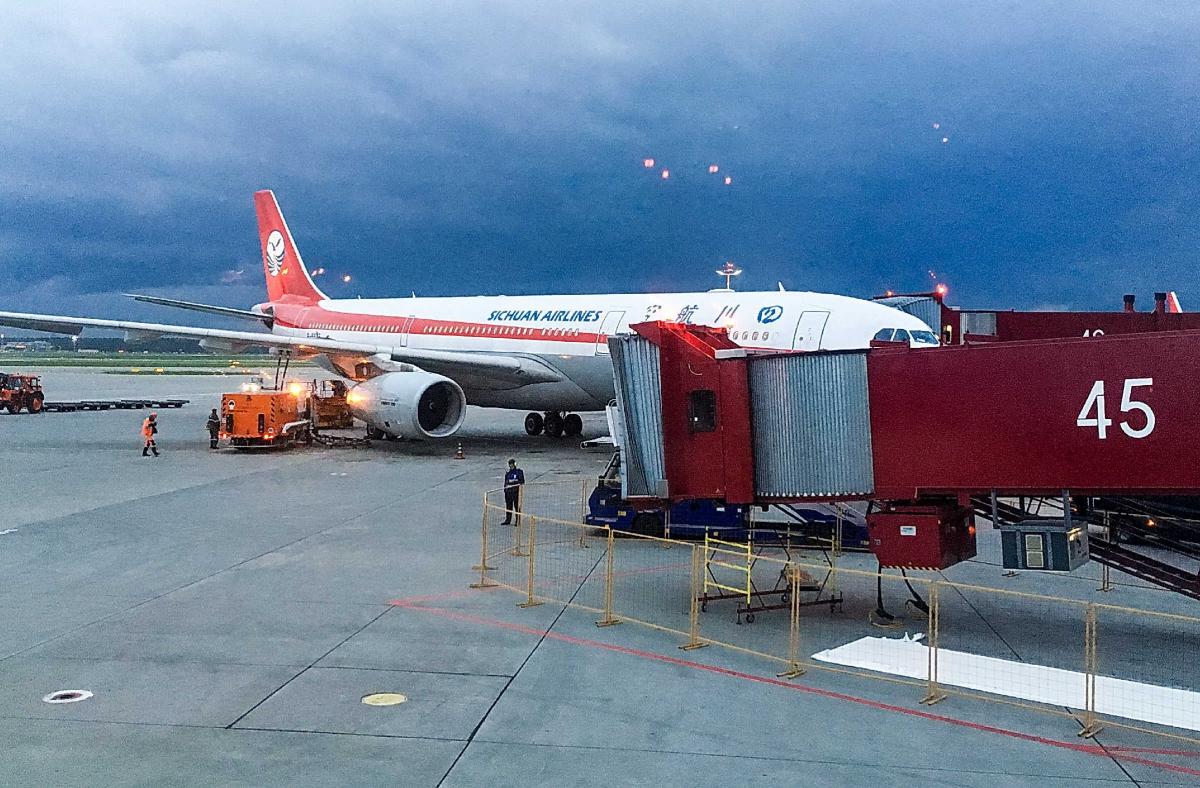 Briefly back in Moscow before China, I managed to fit in a speech at the Bauman Moscow State Technical University:

The students listened most attentively to my speech, and the questions after came thick and fast. Whoa – intense. Oh, and btw: if anyone still has questions for me (I don’t think I addressed everyone with their hand up) – please fire away in the comment section below :).