It’s a very old volcano, and looks it: plenty ruined over the millennia; but that’s half its charm.

It has four peaks, the highest being 4090 meters above sea level. Here’s that peak: 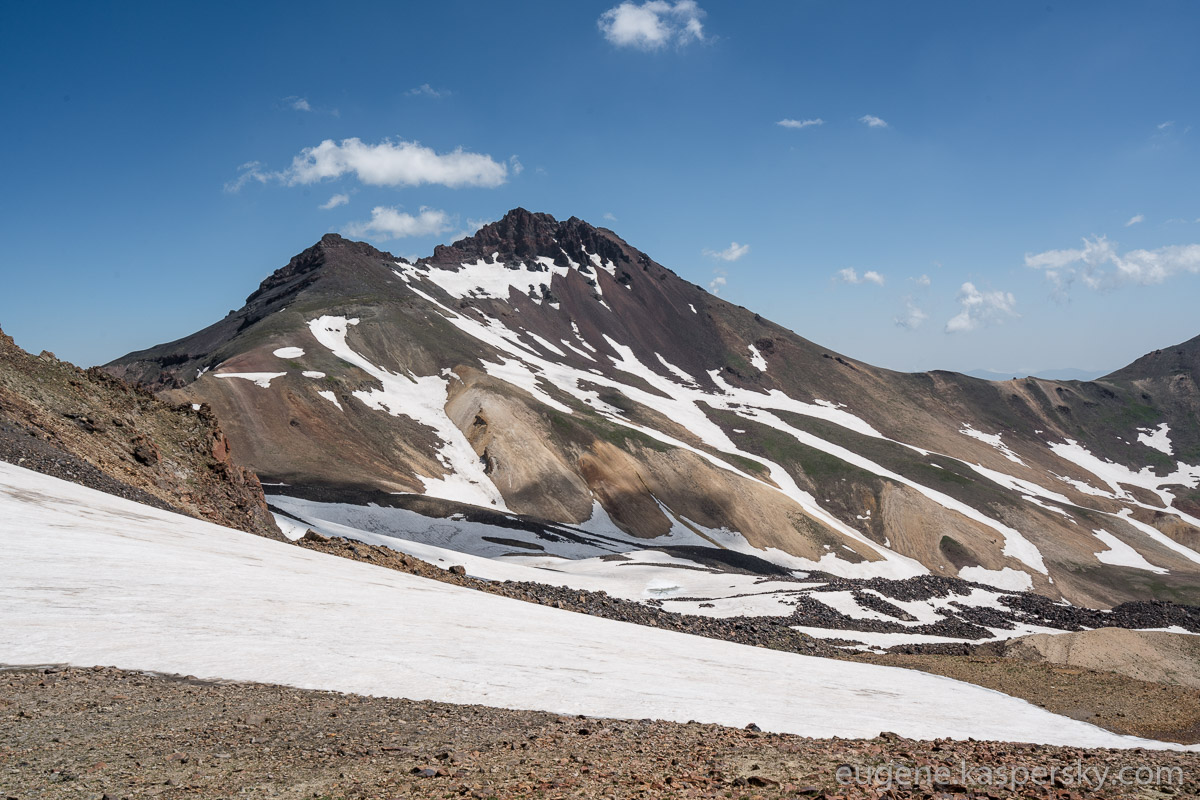 Alas, taking in the highest peak would have needed more than a weekend, and a bit more preparation (we’d made none:). Therefore, we decided to hike up the western and southern peaks; not that they’re all that much shorter: 4007 and 3879 meters, respectively.

Here we are already on the western peak:

Not having a shot of the country’s finest national drink at the peak would have been unthinkably improper :) … 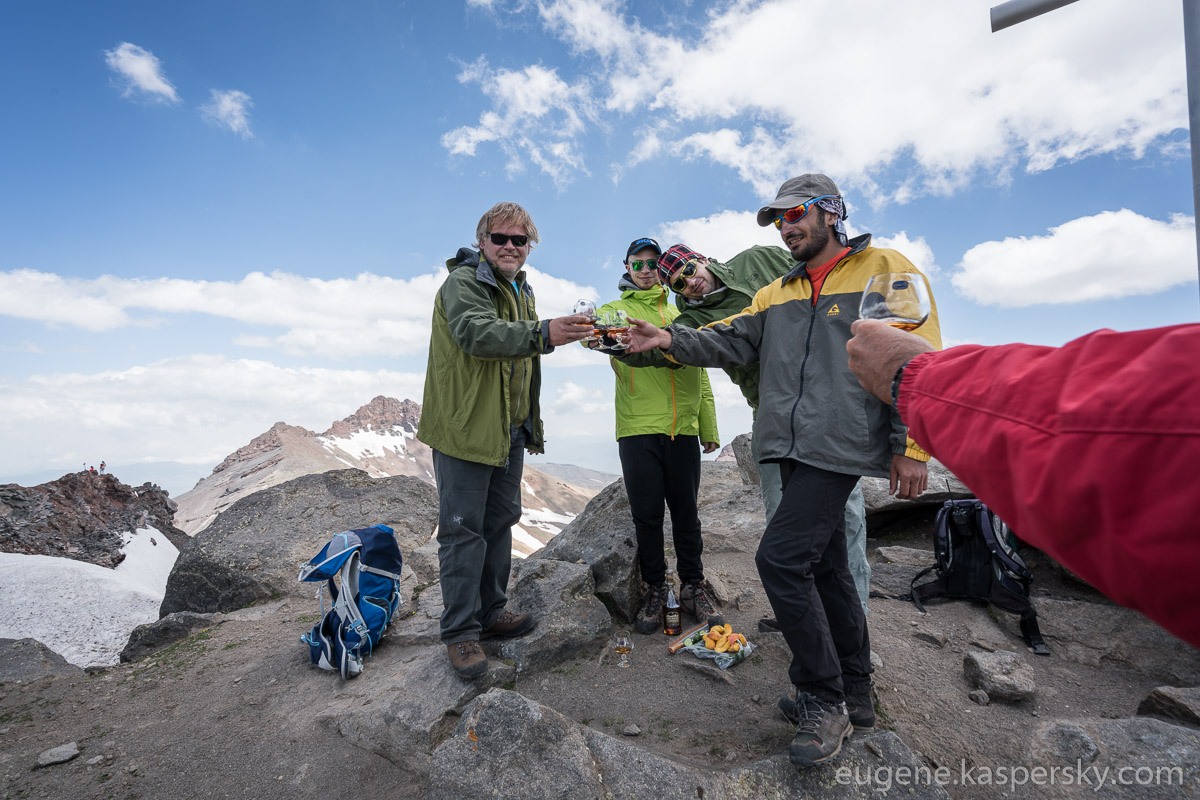 Walking about here four kilometers above sea level poses no problem at all for even just the averagely physically-prepared tourist. However, if you race up here without any acclimatization whatsoever, then you can start to get a ringing in the head and the shakes all over the rest of your body (altitude sickness). It’s therefore wise to take it easy on the ascent; just as well: you can relish the fantastic panorama views all around all the more.

The hardest stretches are those where you have to clamber up loose rocks. All the same, though relatively tricky, you still don’t need full-on climbing gear to navigate them…

And here we are on the southern peak:

And this is the view from up there: 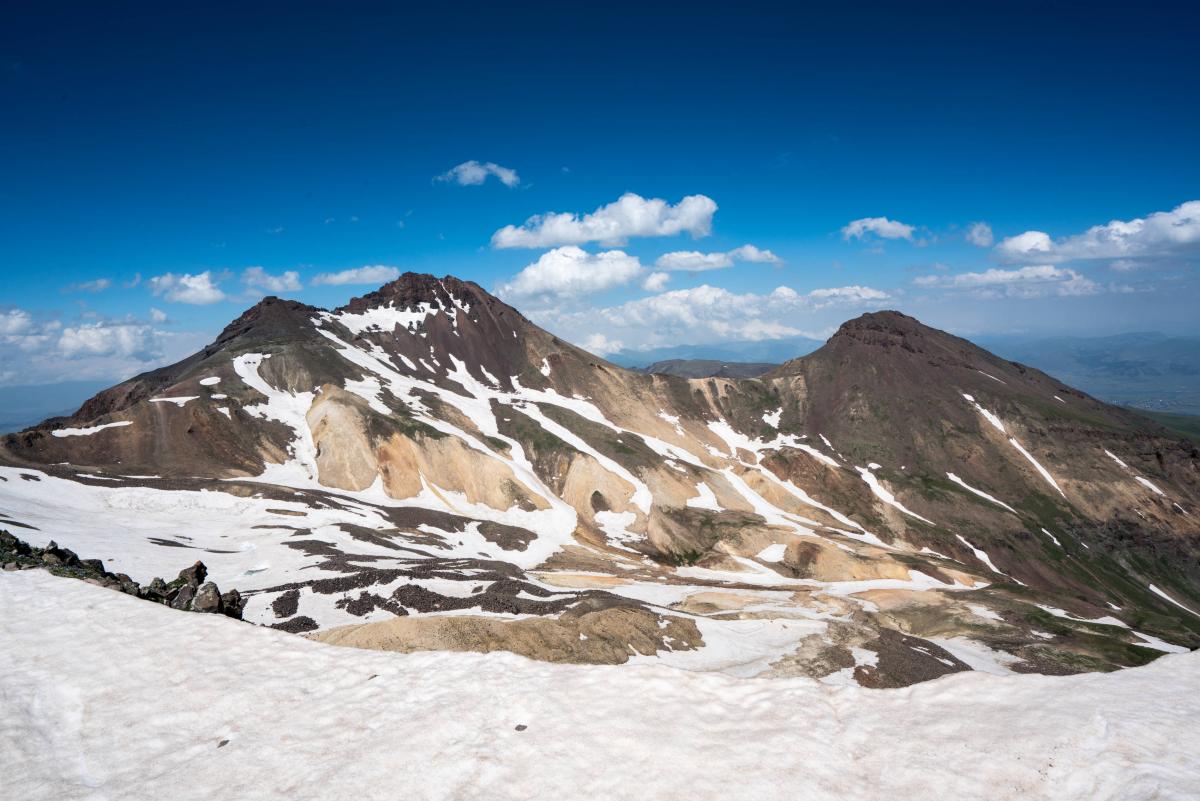 Before we had time to say ‘brandy or cognac?’, it was time to start our descent – riiiiight down to that lake down there…

Lake Kari and the view of the southern peak: 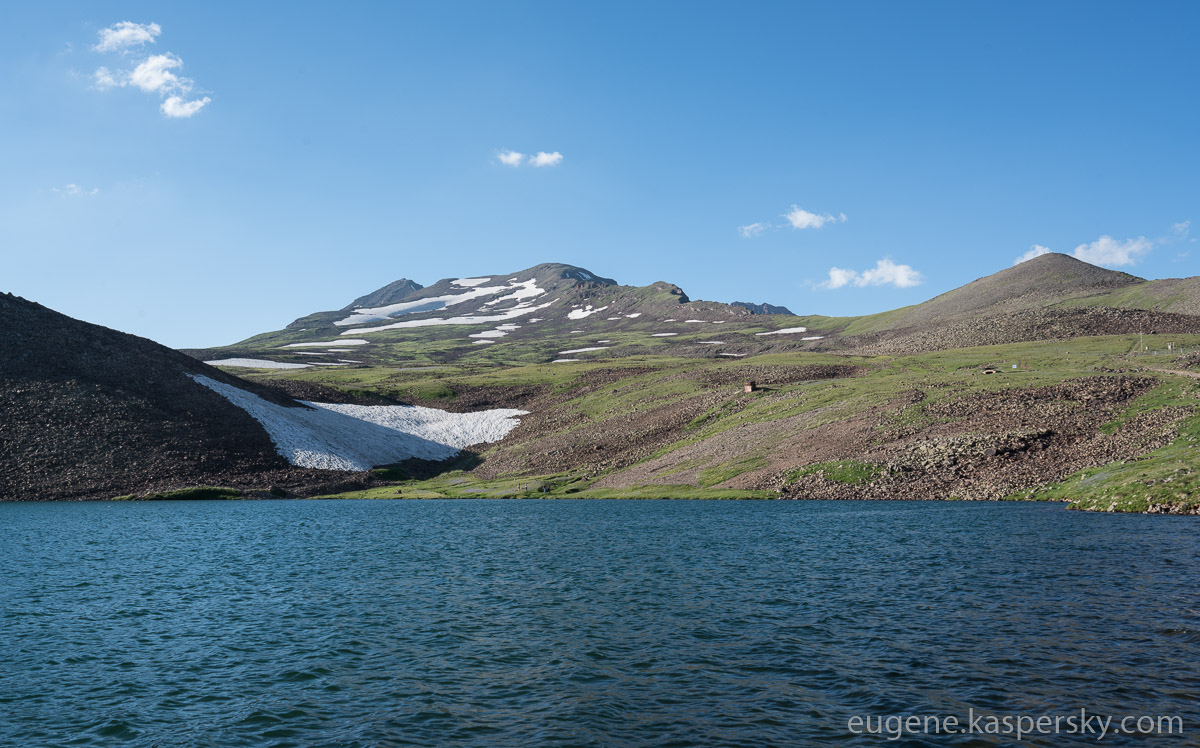 The water in the lake warms up to 5˚С in summer – that’s plenty for a quick dip! It may not have been the coldest swim I’ve had, but it sure was the highest – at 3200 meters above sea level.

After my swim we had dinner on the lakeside. And for the first time in my life I tried Armenian khash. 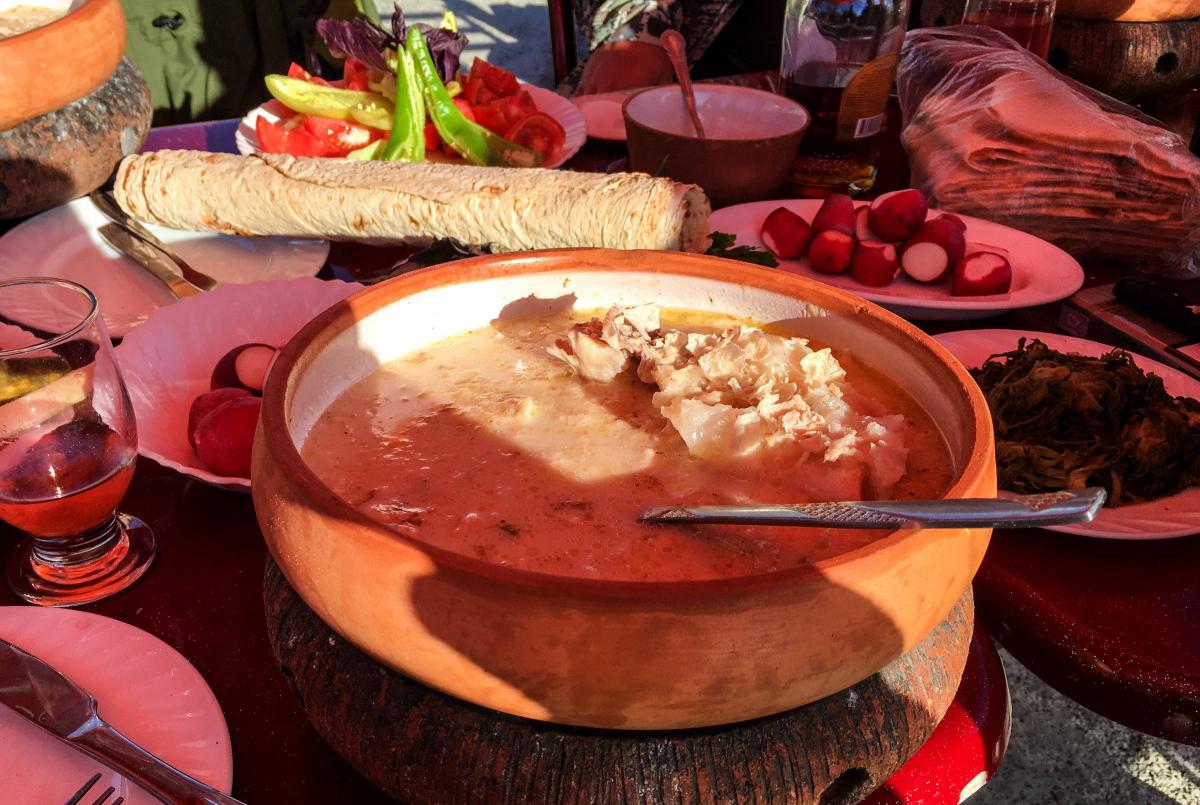 Now, I’m not a fussy eater. But. I’ll be frank… with all due respect and all, this sure wasn’t my ‘cup of tea’. I, er, just didn’t like the taste. One bit. Mercifully there were barbecued meats on the menu too; phew! Needed to eat something after all that active activity up mountainsides :).

And that was our ‘weekend volcano’: arrive Friday evening, spend the night in a hotel (or tents) by the lake, early morning off you pop to the top of a few peaks, evening back to camp. 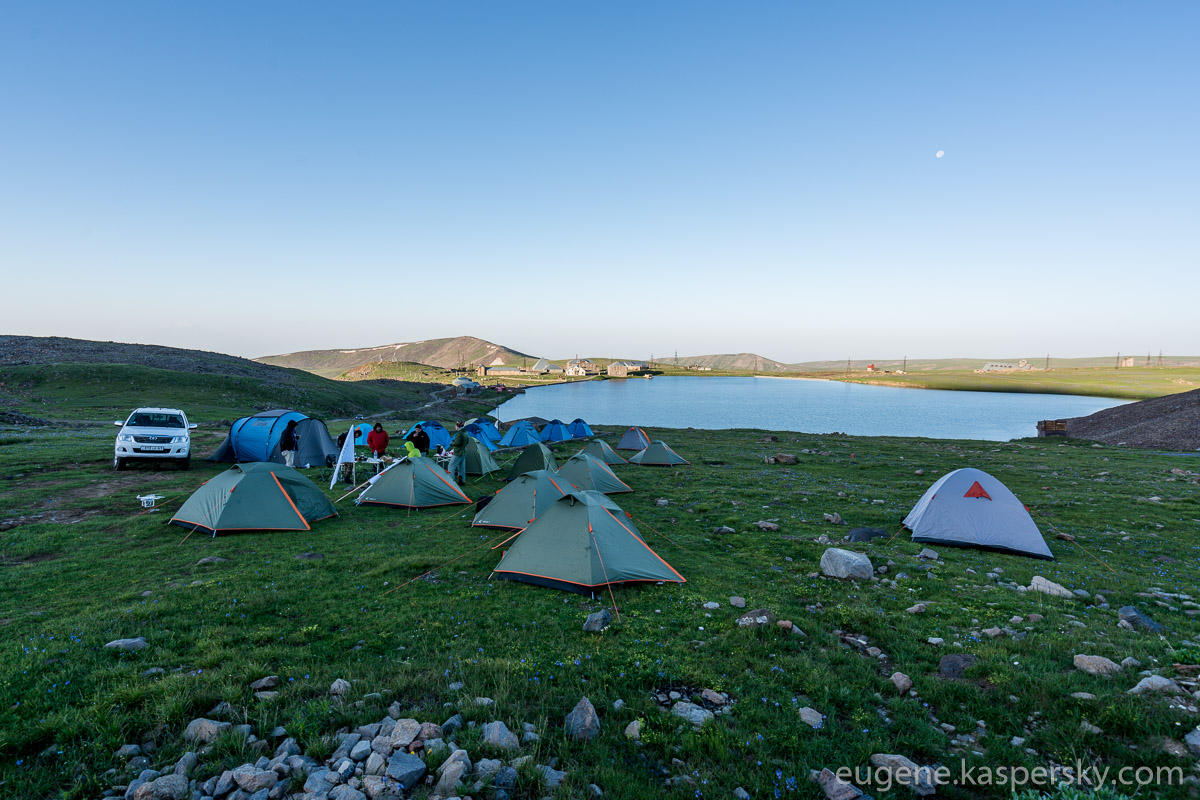 We set off on our Saturday trek not so early (7am) – and returned 5pm. But in that short time we scaled two peaks and had time for stops and a comprehensive ‘cultural program’. 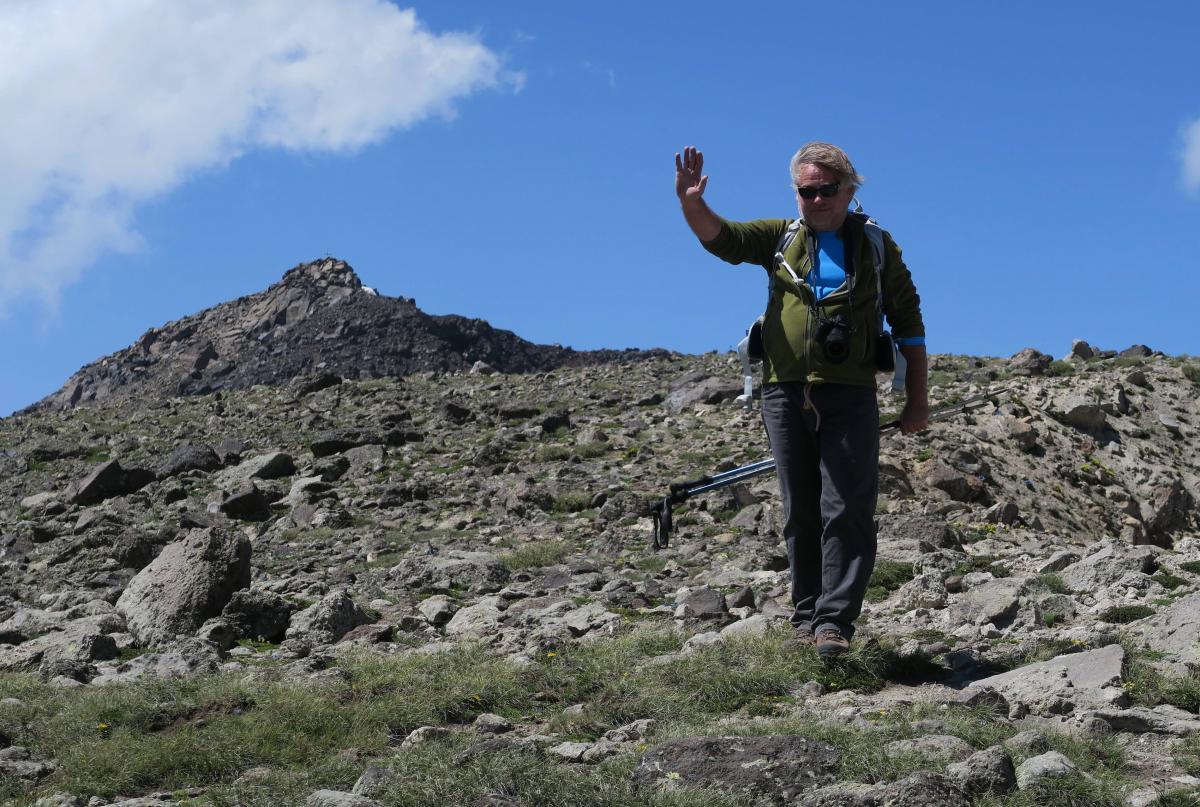 All the photos from our Aragats trip are here.

But that’s not all! I want to make a separate mention of Byurakan Observatory, between Yerevan and Aragats.

It has quite a history, but sadly these days it hardly operates. Telescopes such as these need lots spending on them, but alas there’s no money available. However, it turns out it’s never been the ideal spot for stargazing: atmospheric dust and the light and warm air from Yerevan all hinder visibility.

Even on my camera you could see the glow of the big city spoiling the view of the stars. 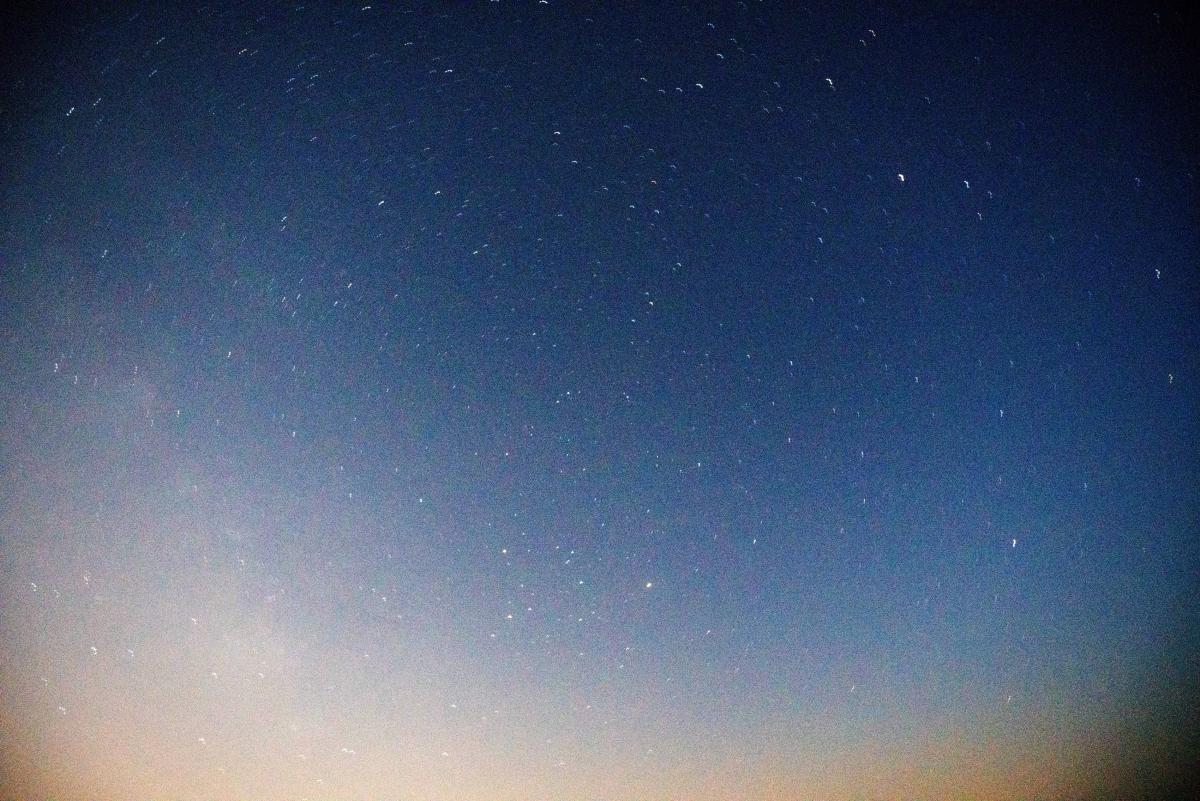 All the same, curious tourists can have a closer look at the telescopes…

This is a 2.6-meter telescope from the 1970s. Back then this was world-beating astro-tech.

Here are the controls of the telescope. Retro indeed. And a little birdie told me that this equipment was inherited from a Soviet submarine written off in the seventies!

That’s all from Armenia folks. Back soon!…