Right after the Mobile World Congress in Barcelona there was mad dash to get to Nuremberg for another exhibition – Embedded World.

This one is about automating all things that rotate, revolve, pull stuff up and down, heat and refrigerate, pump, chemically bond, move on wheels, float and fly, as well as ‘everything digital for men in orange helmets, and loads of other stuff like that. Big time cyber-industrialism! 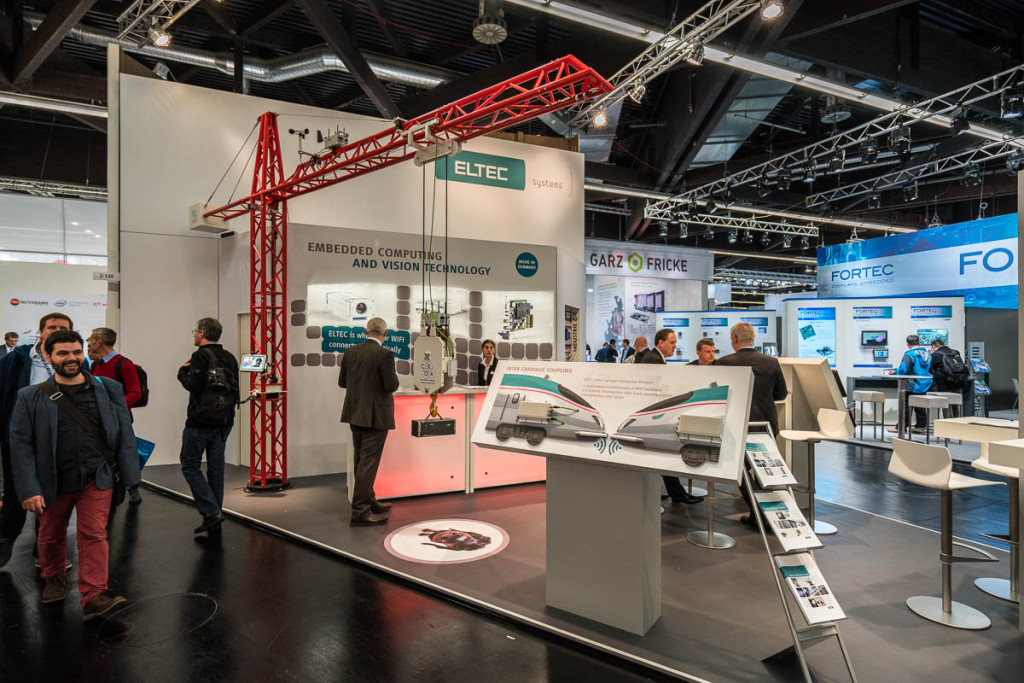 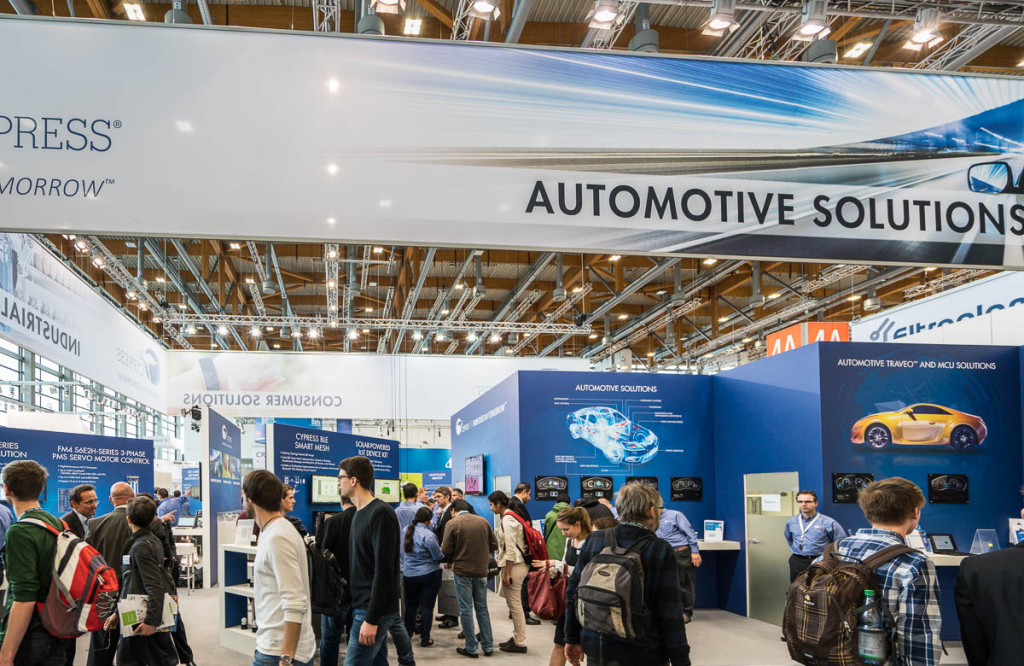 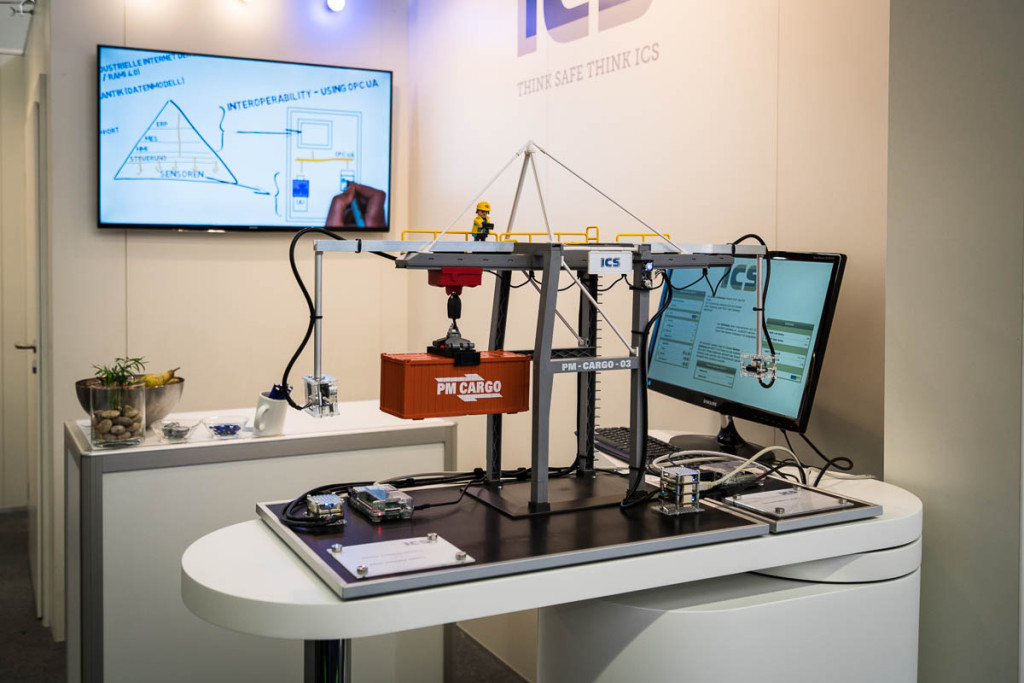 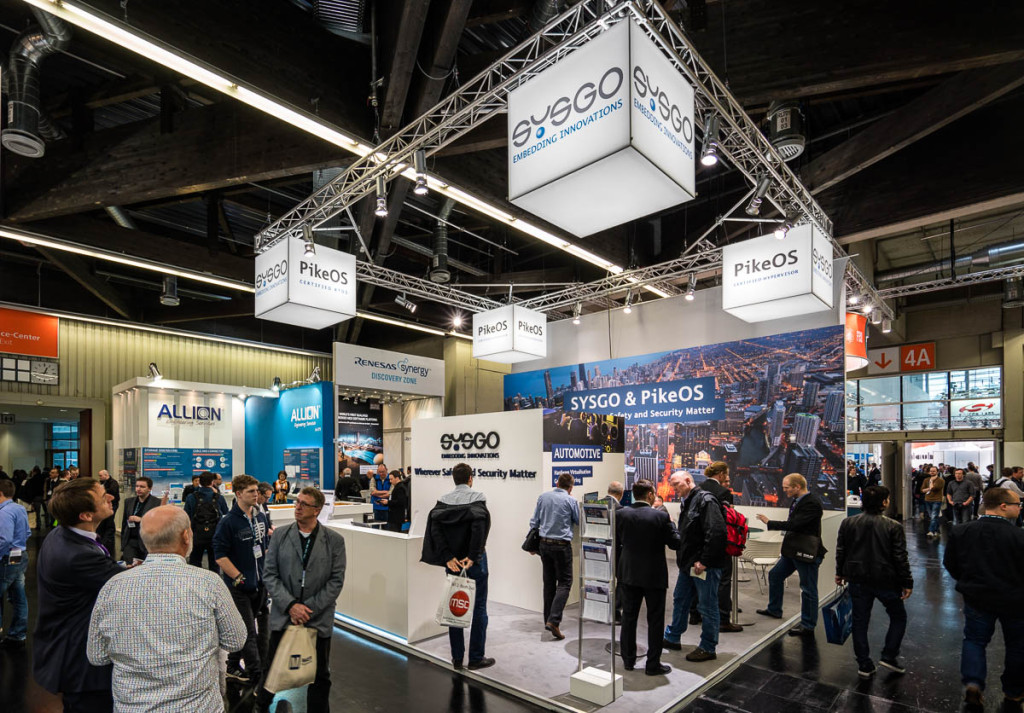 We have a presence here, too. We tell people about industrial contingencies, targeted attack scenarios, about safeguarding themselves against all this – in short, we offer “pills for factories”. Here is our stand and the ‘industrial contraption’ we use to demonstrate incidents caused by hackers and how we shut the door firmly in the face of all this maliciousness:

Visitors walk past; they fix their eyes on our stand, they pause… then a surprised “Antivirus? Here? What on earth for?” We tell them, we explain, we show them – there’s a round-eyed “oh…”, then they start asking questions that are a bit more specific.

Well, actually I’m stretching the truth a little. Around half the visitors already know we’ve gone industrial and are no longer surprised. We’re trying to enlighten the other half. Hope it’s not too late :)

Incidentally, the word “security” can be seen on the vast majority of stands. The demand for our features is growing by leaps and bounds. Actually, we happened to be the only dedicated security company to take part in the expo. The same was true of last year. A paradox, no?

The expo is pretty big: 4 large halls, about 900 companies from across the globe, 25+ thousand visitors. No surprise then that hotels in and around Nuremberg were fully booked – some of our crew had to spend the night as far away as Frankfurt.

And, of course, I have meetings, discussions, and a big presentation about the cyber-industrial ‘dark side’.

Plus some other funny, interesting and curious things, including questions to the audience.

1. There were some curious exhibits among the various moving models. Such as this automated wine pouring machine: 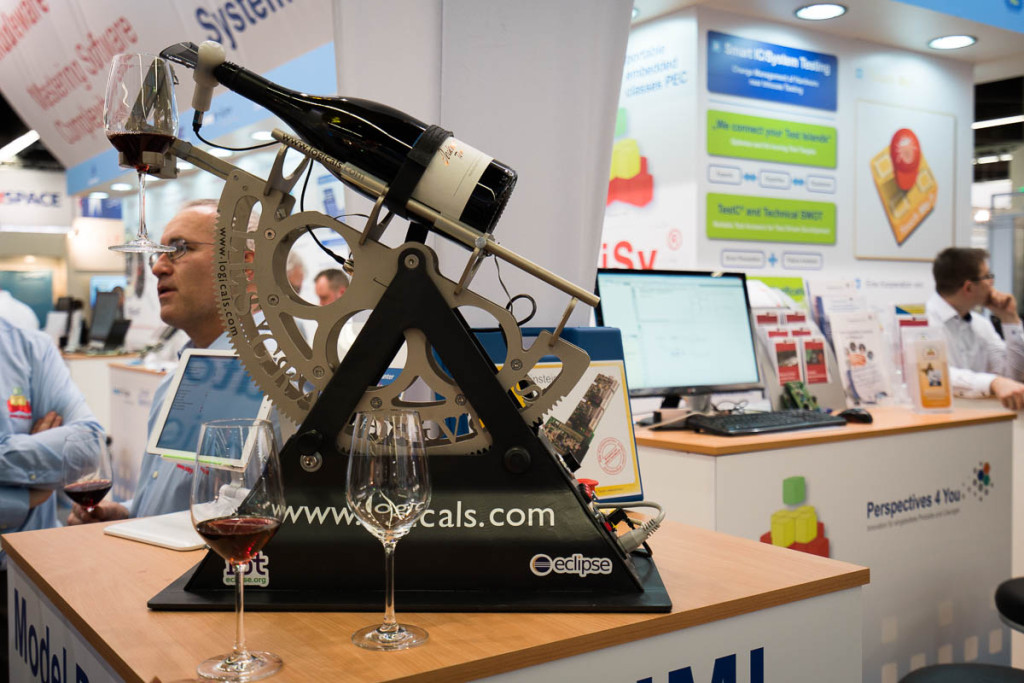 I wonder if one of these can be adapted to pour beer, wait for the frothy foam to settle and then top up. It could be a hit here in Bavaria.

2. Nice big futuristic yellow truck.I wonder if somebody drove it here or whether it will be taken apart and shipped in boxes when the expo is over. That’s a question to the audience (hint: if it hits the road, there ought to be photo/video evidence from chance passers-by, petrol-head instagrammers and amazed cyclists). 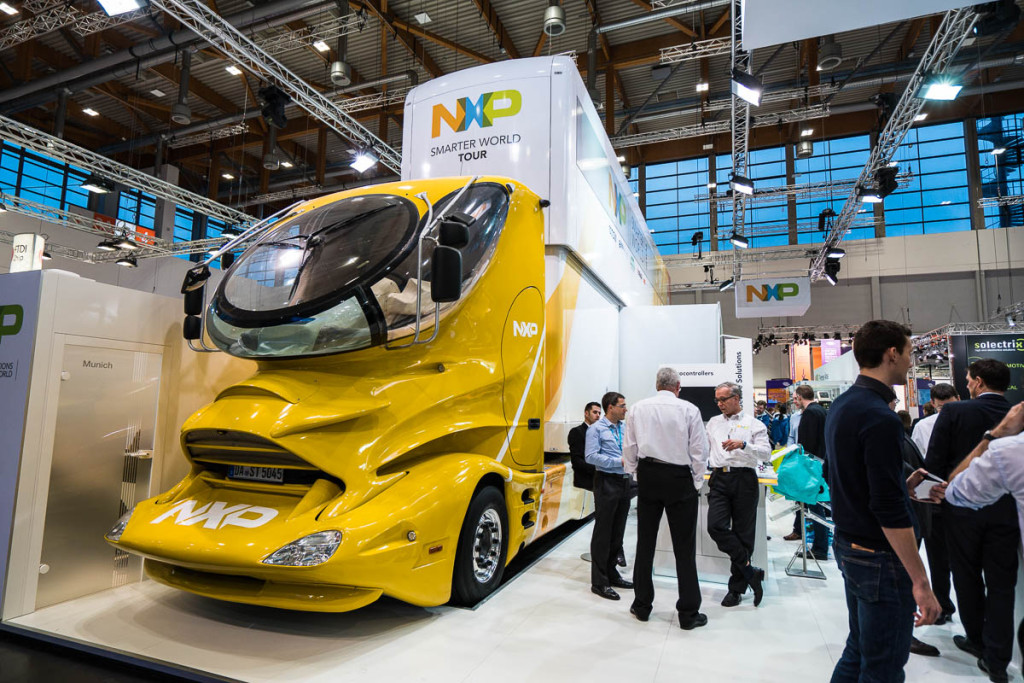 3. There are some funny characters, too. For example, these guys boast that they have:

а) “Agile + Waterfall + ISO” (what sort of a beast do they produce as a result? Hollywood must be green with envy!)
b) Over 100 million (sic!) lines of code “drive this car”. 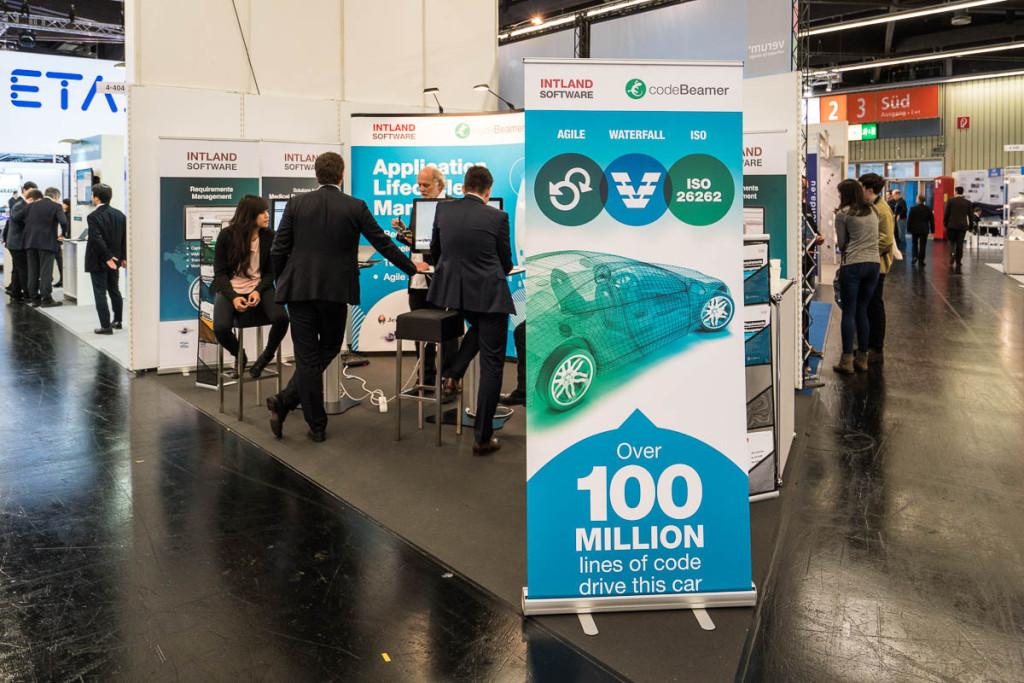 Really, they should have kept it to themselves. At least they are not mentioning how many bugs they have per thousand lines of code. Actually, the number of lines of code is a very interesting subject – the thing is it has no direct bearing on a product’s quality or functionality. If you master copy-and-paste techniques and hire students as programmers, you might be able to put together half a billion lines of code, the limiting factor being the capacity of the code compilation system. And if you try really hard, two or three billion lines are probably doable! All you need is the will and sufficient competence.

For comparison: the Mars Curiosity rover rolls around Mars with 2.5 million lines of code. And they say the now-retired Space Shuttle flew on 420,000 lines of code. One thing I’m not sure about is whether that is all the software on board the Space Shuttle or just some of it (the primary avionics software system – PASS).

Questions to the audience:

4. And, after the expo, lechaim! No German exhibition is complete without eating the edible and drinking the refreshing and invigorating at night! This one is no exception: in the evening, they bring out tables and cover them in calories and alcohol in all shapes and styles. Alas, I only saw the feast in passing, rushing from one place to another, without a moment to spare. 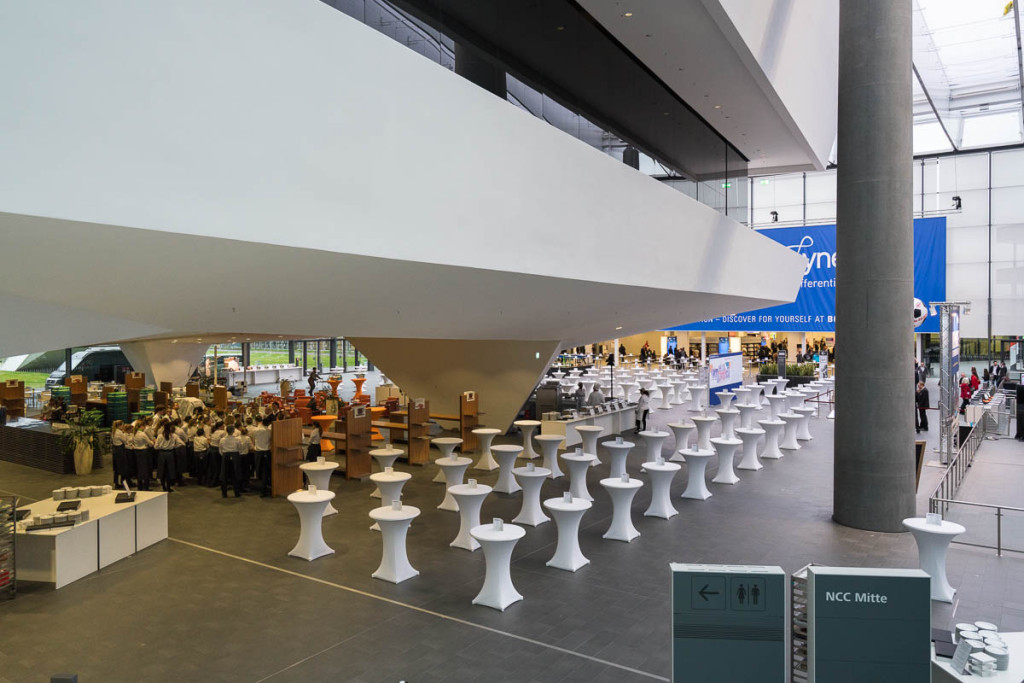 Next year, I need to try and catch up with all the stuff I’ve missed.

The other pics from Embedded World 2016 are here.