Onward we march on our hidden China tour!

Since we happened to be in the city of Leshan in the Sichuan province, it would have been rude not to have gotten up to the top of Mount Emei, in Chinese known as Éméi shān. That’s what we reckoned anyway. Turned out we were rudely mistaken. 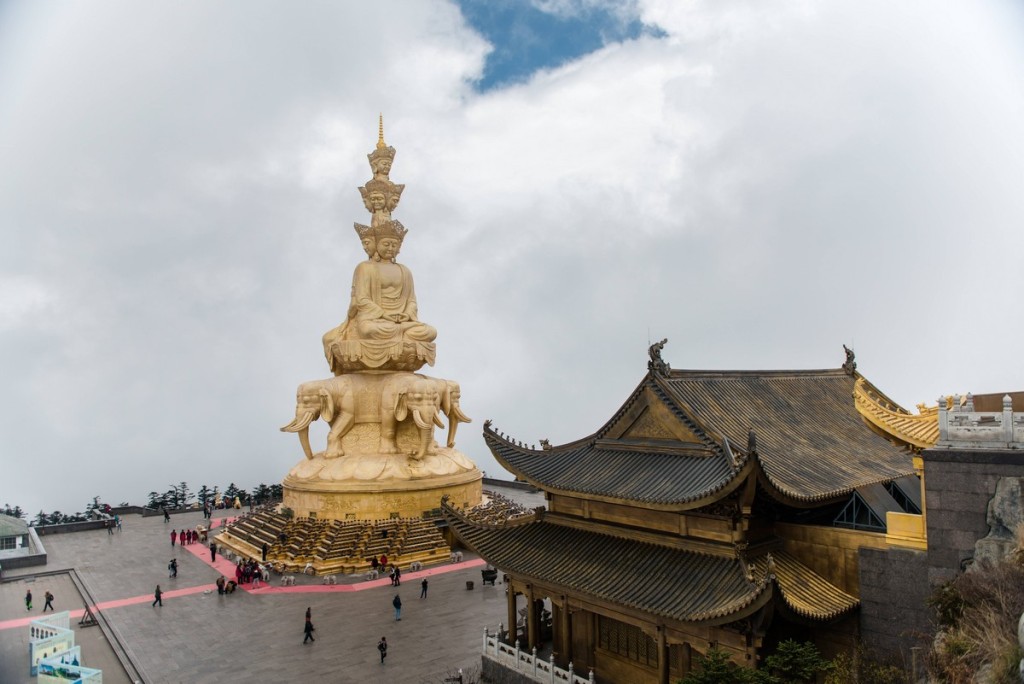 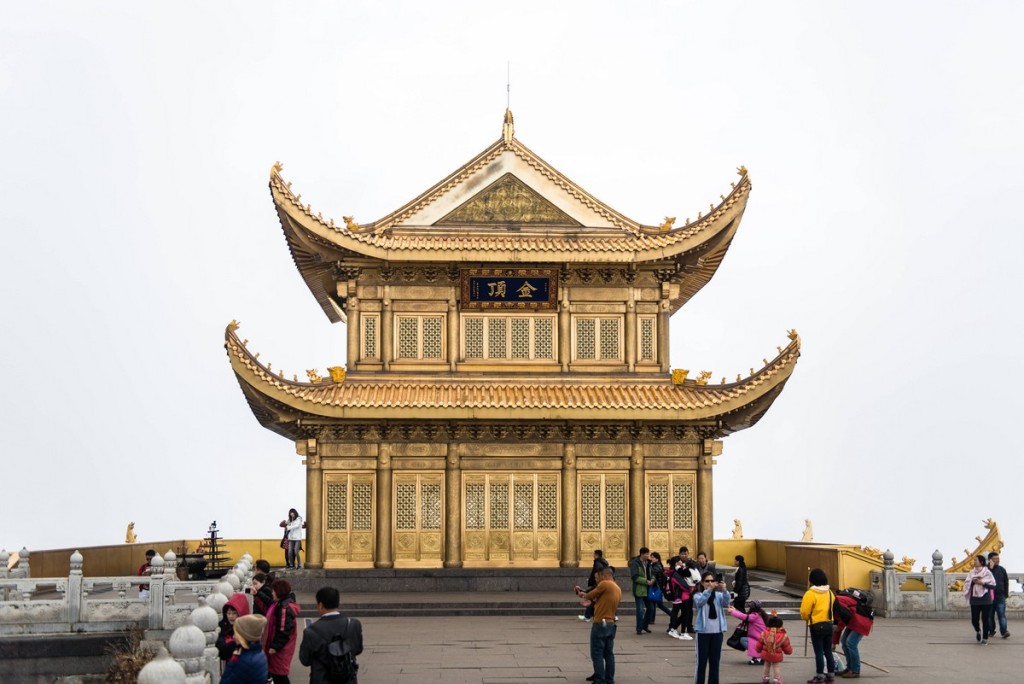 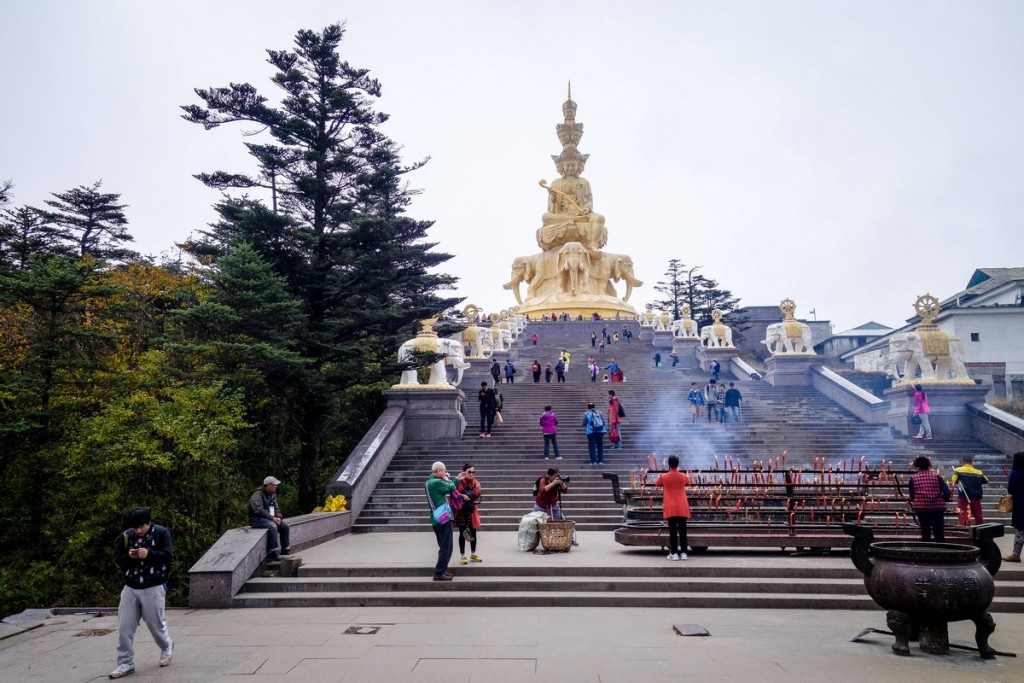 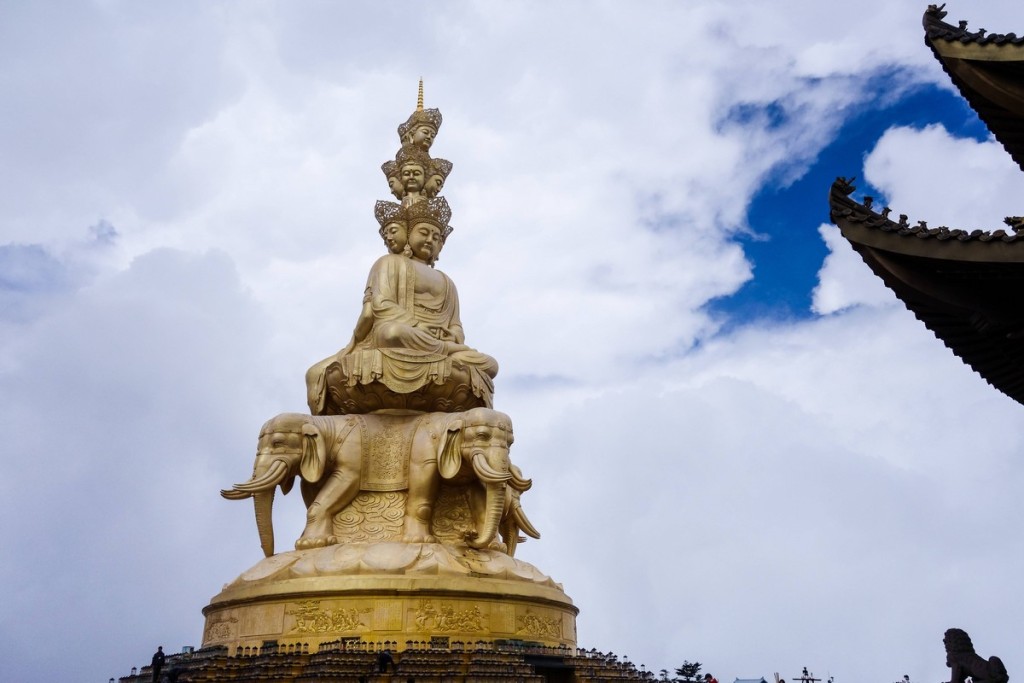 They say this place is a stunningly beautiful one. With one not unimportant proviso: it has to be a fine day. Alas, we were there on a day far from fine: overcast, wet and misty. So misty we could see… NOTHING! Well, apart from the Buddha at the top, plus a few ancient temples up there too.

In good weather this is the view promised from up here – 3000m above sea level: 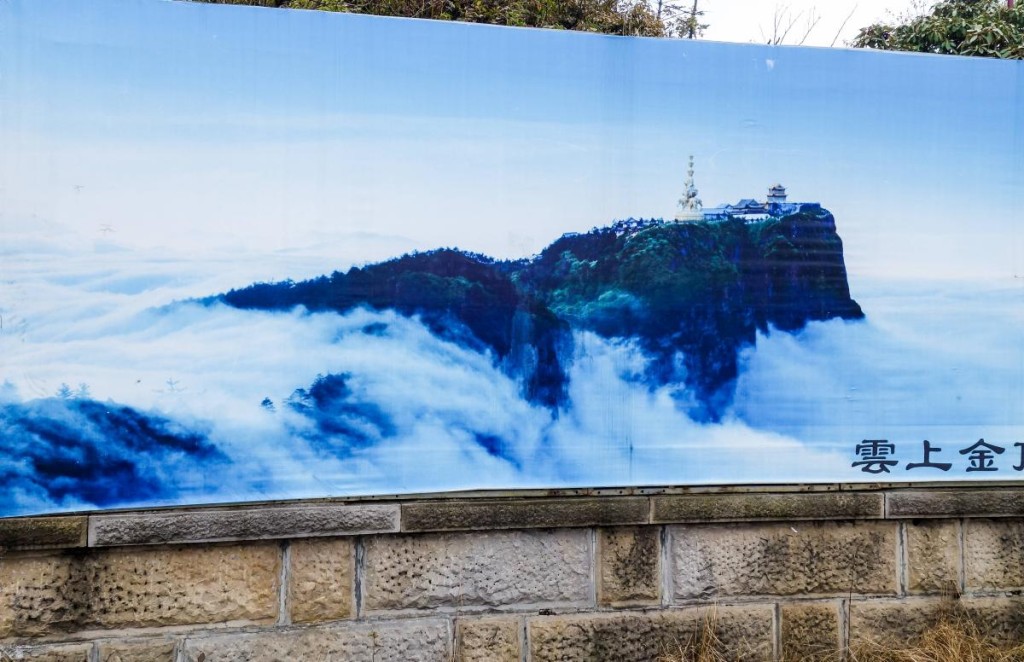 The Buddha of course is a beaut. The temples are beauts. Besides them, instead of vast expanses of awesome panoramic landscapes, we had to settle for… elephants. Oh well, they weren’t so bad…

Finding something good to think about when all around isn’t so good is, I think, a very Buddhist thing to do. So we did it: we thought about how nice it was that there were hardly any other tourists around. Nice. Not great though…

Turns out the statue of Buddha isn’t that old at all, certainly not as ancient as one might expect. In fact it’s just a relative newborn – especially if compared with the Leshan Giant Buddha. The Buddha at the top of Mount Emei is just nine years old, having been built in 2006. Search for the ‘Golden Statue of Puxian’ for more info, for example here.

In good weather, at the peak of mountain there are said to be assorted natural climatic-topographic wonders to behold, including enchanting daybreaks (featuring a sunny halo atop the Buddha), oceans of fluffy clouds and sensational sunsets.

These are the only views we managed to see – a whole lotta nothing:

Persisting with the eastern ‘there is no good and bad, just your thoughts making stuff so’ thing, there was another pro in among the perceived cons: there was zero line to get to the top. All the same, from the entrance to the park to the very top took us a whole three (3) hours! Half of that was on a bus, a few minutes were in a lift (much like a ski lift), and the rest of the time on foot. Woah – there’s yet another pro: good exercise. This mindfulness seems to be working!

Based on the length of time it takes to get up to the Buddha on Mount Emei, I figured the only way to check out the dawn is to spend the night up here. There is, as it happens, a hotel at the top. This is likely run by Buddhist monks and may not be quite the Dorchester, but it does tick the main box: it’s at the dawn-viewing-enabling very top. 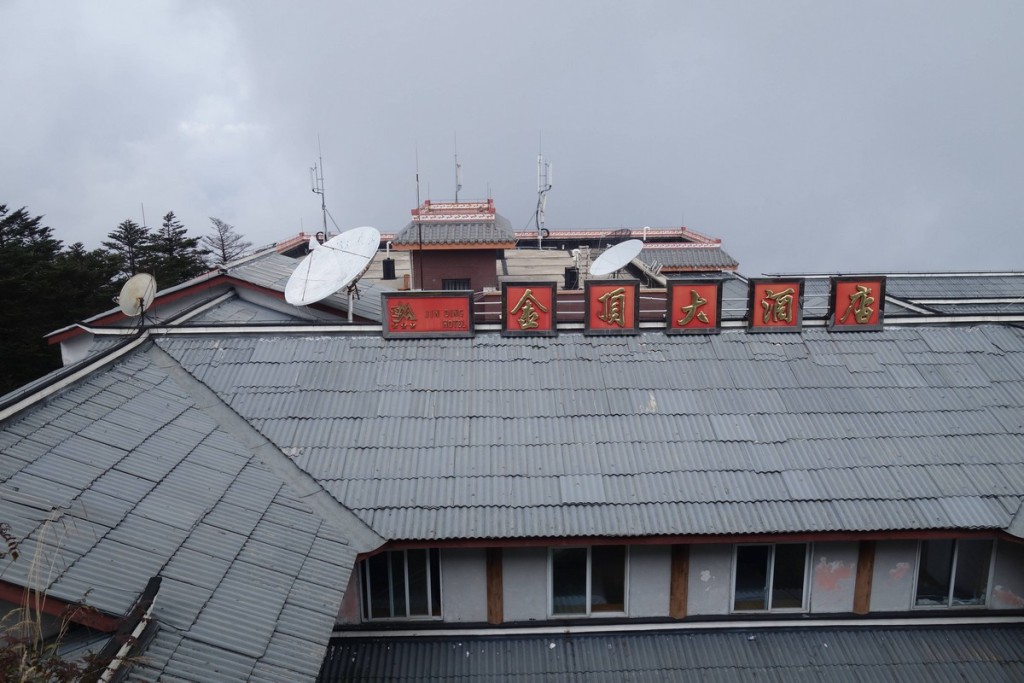 We also were told how the paths/steps – good, sturdy, tidy, stone-and-wooden – up and down the mountainside to get to and from the Buddha are incredibly scenic too. Alas… yes: you know, you know… We saw no scenic views whatsoever therefrom.

If you don’t fancy the trek up the mountain – there are… what are those royal carriage thingies called?… Litters! They are central to the local history it turns out (see the next pic). We, though, being of sporty constitutions, took a different mode of transport – two feet per person! 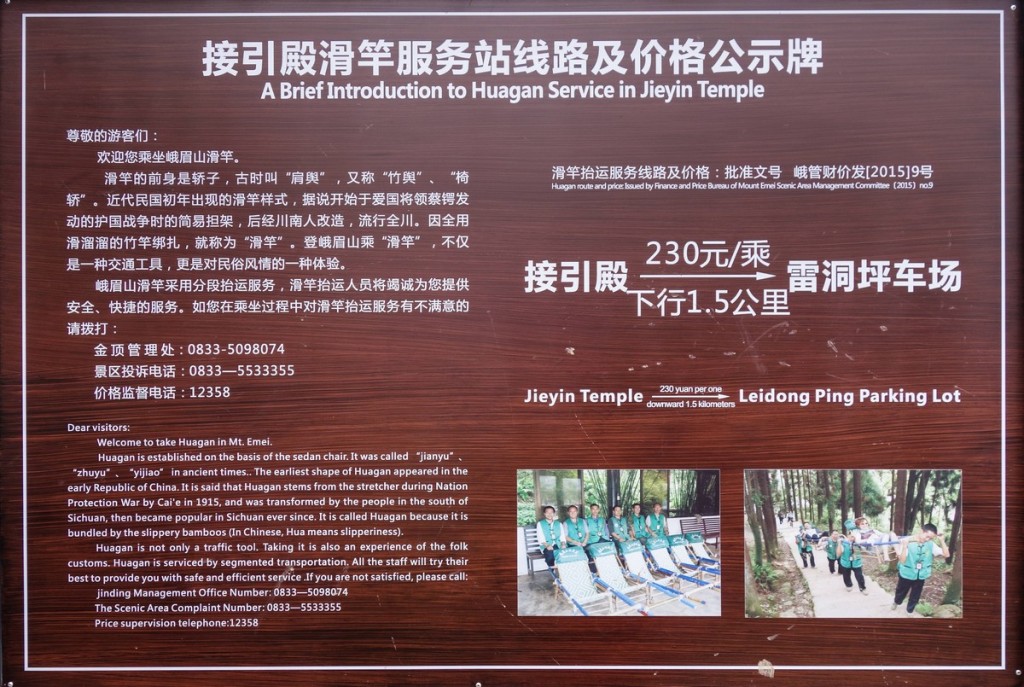 …More regret and remorse (quickly banished through meditation): the local infrastructure is obviously designed to cope with mass tourism. Just look at the empty stalls for lines below. Clearly, everyone had yesterday read the weather reports for today – and logically decided not to come and (not) see the Buddha on Éméi shān. Everyone but us! 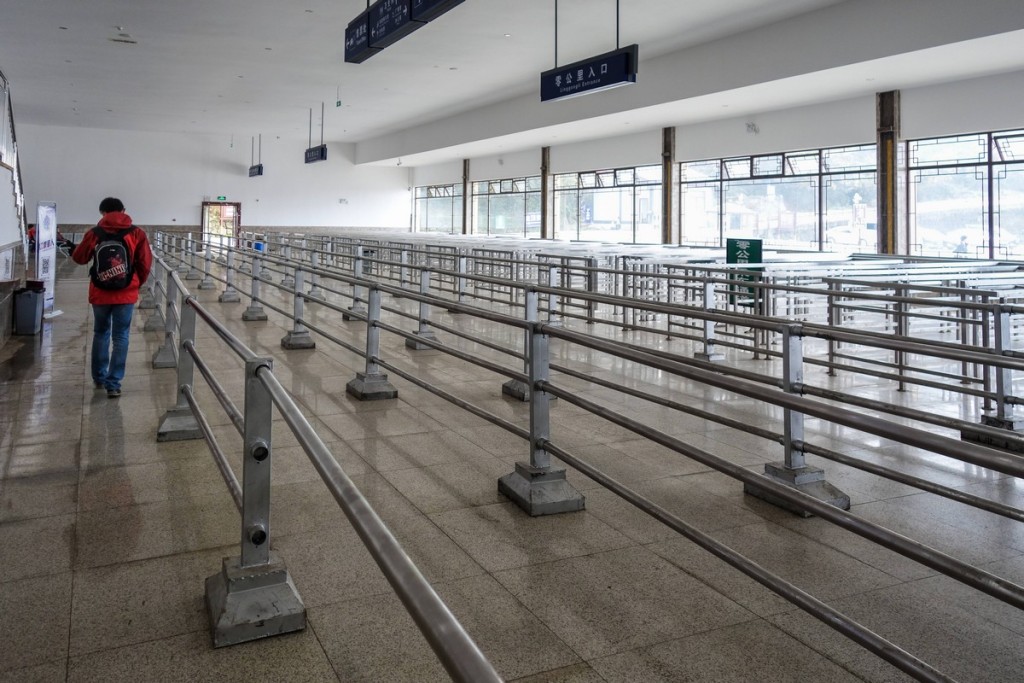 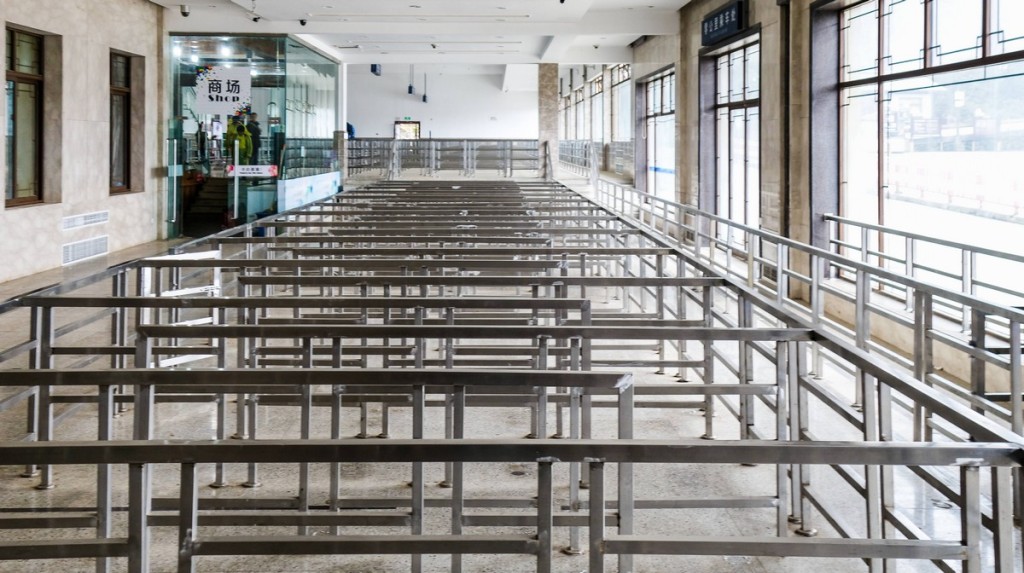 So. To sum up. We had just one day here, and practically all of it was used up on… getting up to the Buddha, and then getting back down from it. No regrets, honest! But next time: official weather forecasts MUST be checked!

That’s all for today folks! Back soon with more tales form hidden China!…

All the photos from Mount Emei are here.