If you enter ‘Buddha and’ into Google, guess which five suggestions Google finishes the sentence with…:

Buddha and the quantum

Curious, I admit. But my topic today is also curious: Buddha and… the ocean!

Never saw a connection, right? Well, did you see one between Buddha… and cats? :)

Anyway, I’ll save the Buddha-and-the-ocean connection until the end of this post (it’s a brainteasing riddle – well worth the wait). First off – text and pics by way of introduction…

In the city of Leshan there’s a giant Buddha statue, by coincidence called the Leshan Giant Buddha, which peers down on the river Min gushing past it. It’s been there for more than a thousand years. That’s a lot of river water that’s flowed past it… 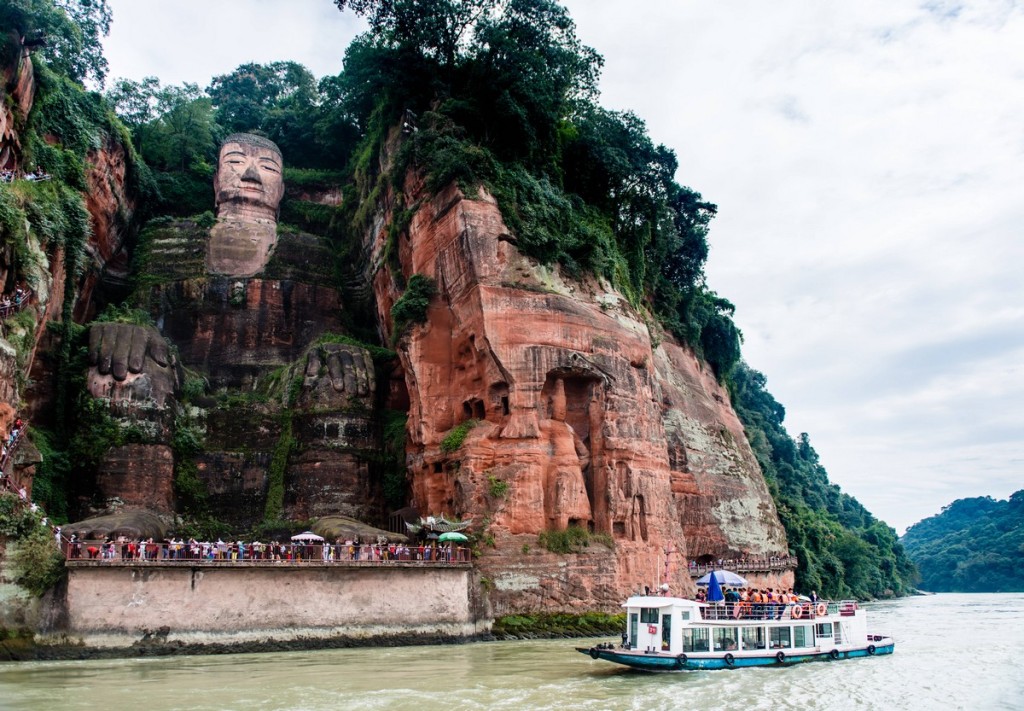 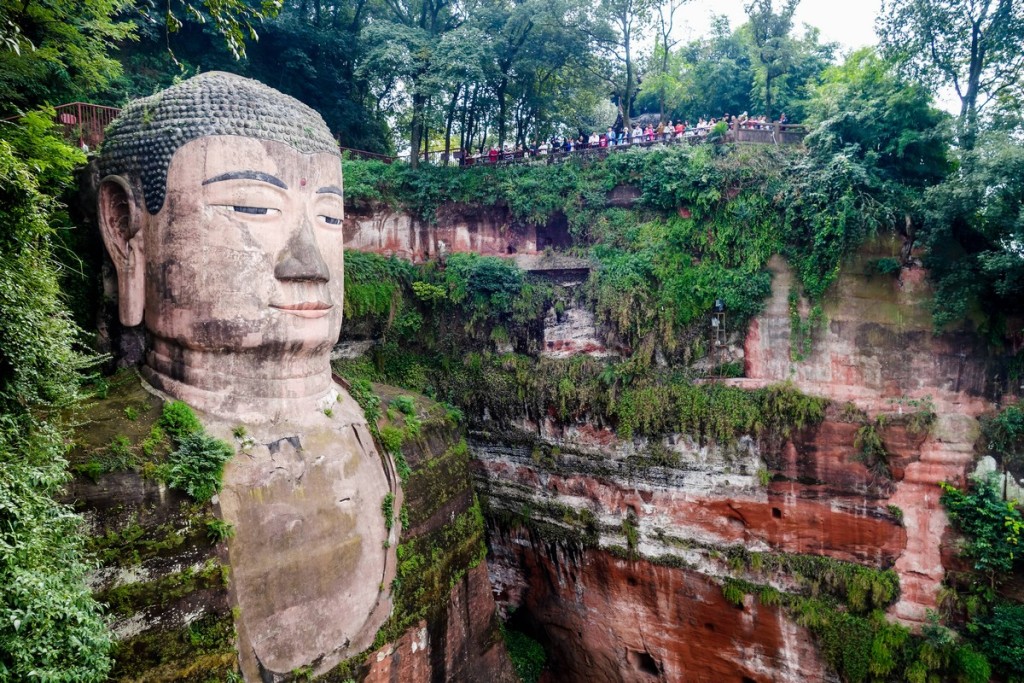 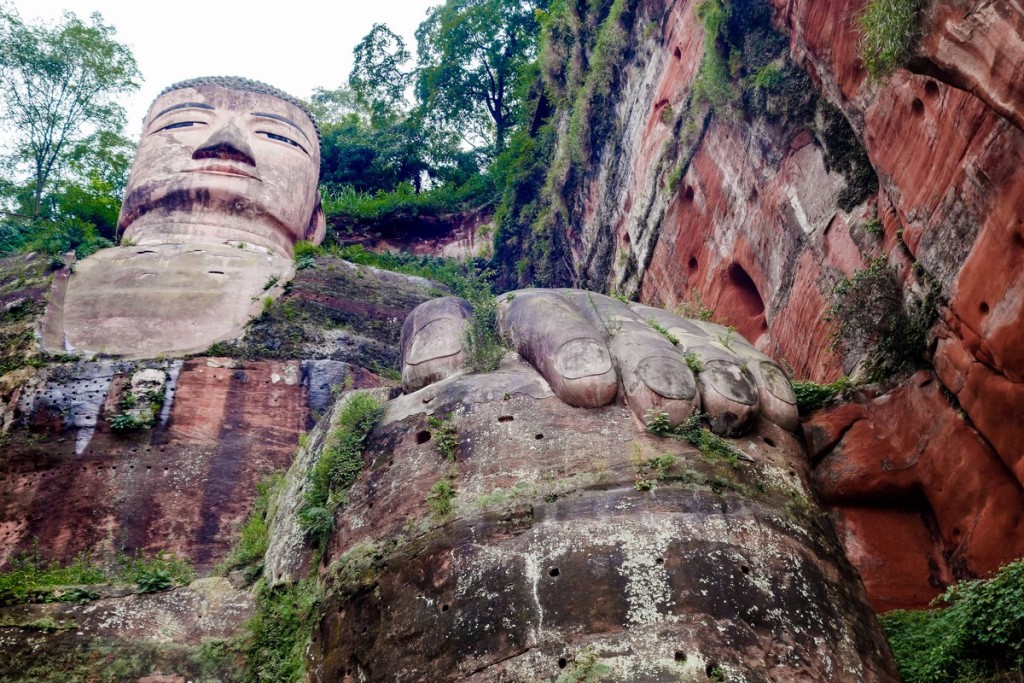 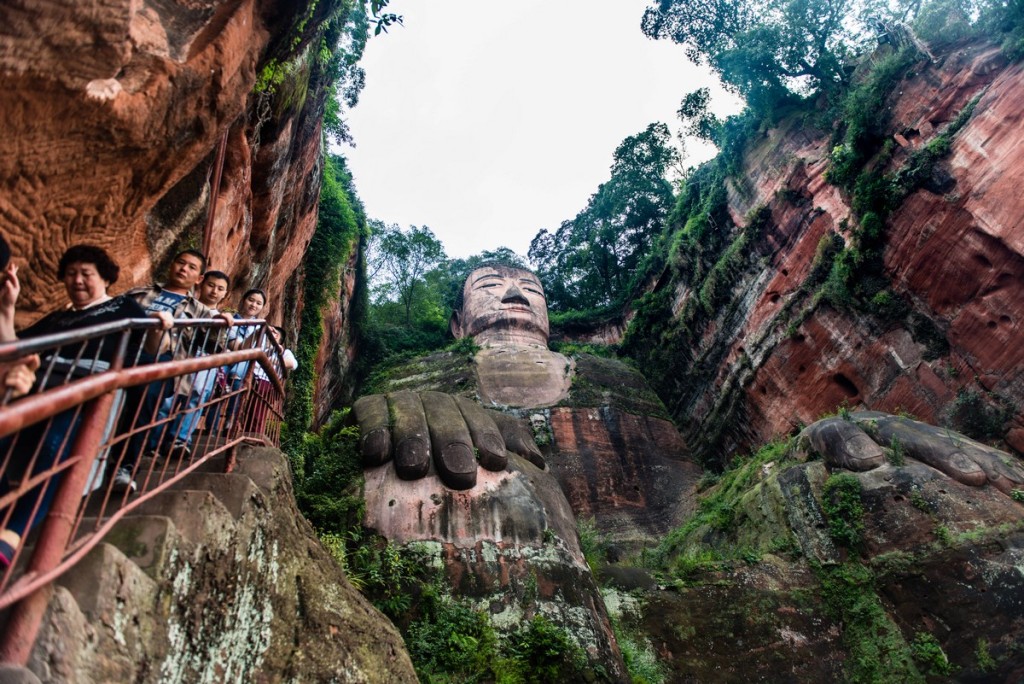 They started chiseling the statue out of the stone rock face in the year 713, and didn’t finish chiseling until 803 – 90 years later! I guess that means no one on the initial chiseling team ever got to see it completed. The seven hundred and thirteenth year Anno Domini. My word. Can you imagine this world that long ago? I can’t. I can’t even try when it’s a continent/civilization that I’m familiar with, never mind one far, far east of the Urals…

It’s 71 meters tall (as different sources all concur). Each finger and toe is several meters long!

In summary (here I go again with my broken record), if ever you’re in these parts, get on over to see these outsized bodily parts of the Giant Buddha. You won’t regret it. More broken vinyl…: This needs to be seen in the flesh!

There is a downside to a visit here. To get up close to it you need to stand in line for about an hour (and we were lucky; I’m sure it can be a LOT worse). However, that waiting experience isn’t one of the worst in the world (like, say, in JFK). Unlike the norm for China (and many other places), it’s a very… genteel and mannerly line, with not a single elbow put to inappropriate primitive use. It gets even better: around halfway down the line there’s a stall selling fried sausages and drinks. Now you’re talking ;).

Getting back below is much easier – down the steep staircase that clings to the cliffs:

There are always plenty of tourists in China. No – oodles of them (no noodle jokes please)!

And it seems they all want a close look at the Leshan Giant Buddha. And who can blame them? So chill, meditate, and work on that mindful patience. There’s no such thing as quick access to the Buddha – anywhere – by definition, including here.

But if you haven’t cracked eastern mindfulness yet – there are those sausages I mentioned: very tasty. Plus there are amazing pics of the surrounding landscape to be taken while waiting. For example, here’s the view of Leshan taken from near the front of the line:

Another thing you can do is to try and work out what the various warning signs mean by looking at their English ‘translations’. What, for example, the meaning of the following sign is I still don’t know. Any guesses?

And now, finally, that riddle I mentioned…

Wait, no; first a few more photos to get you prepared and psyched:

All mindful and meditated? Ok. The brainteaser:

How much water has this Buddha seen – as a multiple of the volume of all the world’s oceans?

For the correct, best argued, and just plain wittiest – I promise prizes!

The rest of the photos of the Leshan Giant Buddha are here.