They say that the world’s largest population of sockeye salmon – several million of them – comes to spawn in Kurile Lake. And, having been there, I can believe it: it’s packed full of fish, lots visible to the naked eye, splashing about frantically. Not quite as packed as the lakes in Alaska (you can’t see through the fish there’s so many there), but all the same – impressive.

Kurile Lake – rather, the land surrounding it – is also big on… bears: big, as in, the largest population of brown bears in the world – around 5000 of them, if my memory serves me well. At least – it was 5000 several years back. Now it’s probably a lot higher as they’re propagating at a turbo-charged rate of late. I remember the norm for a family unit of bears being mummy bear plus just one or two cubs. These days there are normally three if not four cubs! So it looks like everything in the bears’ reproduction department is doing just fine :). 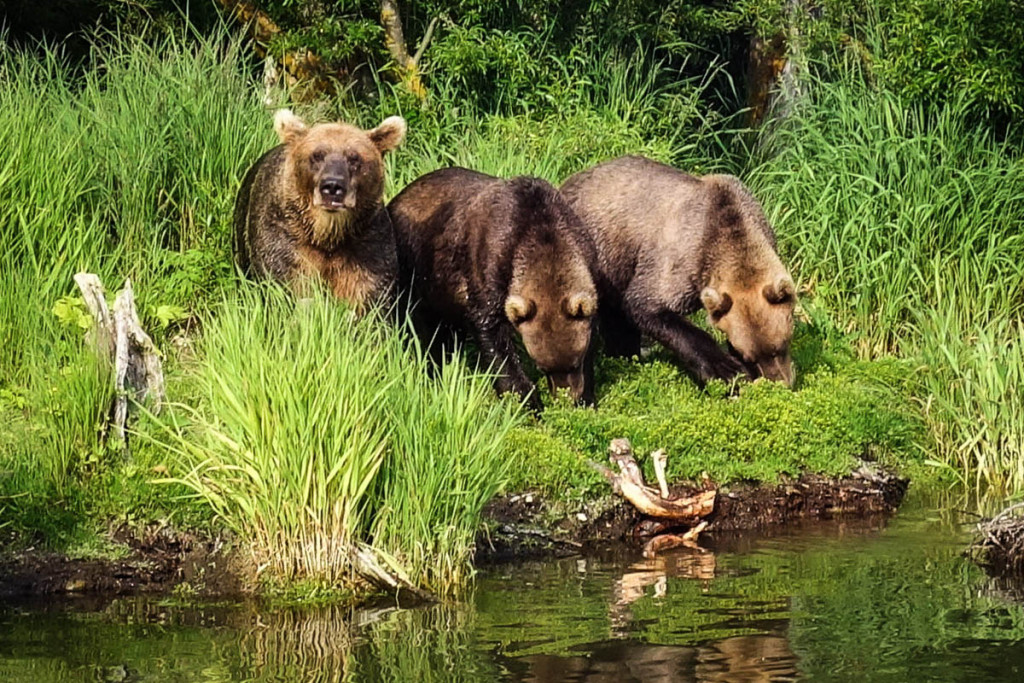 I'm back from #Kamchatka #vacations. Getting through full email inbox (as usual). Nevertheless expect an avalanche of pics here #ankam2015

Btw, how many bears can you see in the above pic? 14 or so? Well, when I took the photo, I counted up to 20 – including those that didn’t fit in the pic all around me… and then I lost count!

They’re so funny to observe…:  They just potter about, in full chill mode, going about their business. Some are finishing their lunch and then wander off into the bushes; others have just woken up after their siesta and are heading lake-wards for their next meal; mummy-bears watch over their little ones jumping about here and there. Such non-static scenes – a treat to watch.

And here are the fish:

On the bank of the lake stands a camp territory, with two new little very neat-looking houses on it. There are also tents, bathrooms and other assorted useful installations. There’s even a banya – Russian sauna. What I really like about this place is that it’s constantly being renovated and improved and tarted up – as, I believe, is logical and correct for a touristy place like this (unlike in Khodutka, which is generally going to the dogs bears!). I was here last time three years ago and the difference is pleasantly remarkable.

The base camp is surrounded by a lightly electrified fence wire (which is so thin and unsubstantial, incidentally, that you can’t even see it on some of the below pics!). It’s got just enough voltage running through it to give the bears a small hint that they’d be better off not being so curious – after all, curiosity killed the bear.

Whenever a bear walks up near the fence there’s often a rush of tourists up to it on the inside snapping away. The bears don’t mind – but then, they wouldn’t: these aren’t hungry bears – the ones known the world over to be grumpy and grizzly and murderous. These are fully sated bears – full of fresh fish.

So the bears pose no threat to the humans inside their compound. At least that’s what we were told. It’s just that sometimes… they seem to give you the beady eye, and you start shuddering at the thought of just how flimsy and low-voltage that fence is :).

Kurile Lake is probably unique in the world: the only place where, instead of running for their lives, folks run directly towards wild bears they see approaching – with their cameras at the ready!

Some of the braver photo-tourists are allowed out of the compound under supervision to get closer to the bears. Rather them than me…

A domestic (bear) scene! Mummy bear leaves her offspring on the shore and decides to grab a bite in the middle of the lake. But then kiddie-bear comes along – and swipes his mom’s lunch from under her nose. The bear cheek of it!

Tracy Island. A bear swam over to it and raised hell – and nearly raised Thunderbird 2 too probably to save both the day and the seagulls. But not even Thunderbird 2 could save the poor young bird we saw the bear back into a corner and then slowly devour. Yikes.

And all watched over by a volcano of loving grace – for hundreds of thousands of years already: Ilynsky, over there in the background… 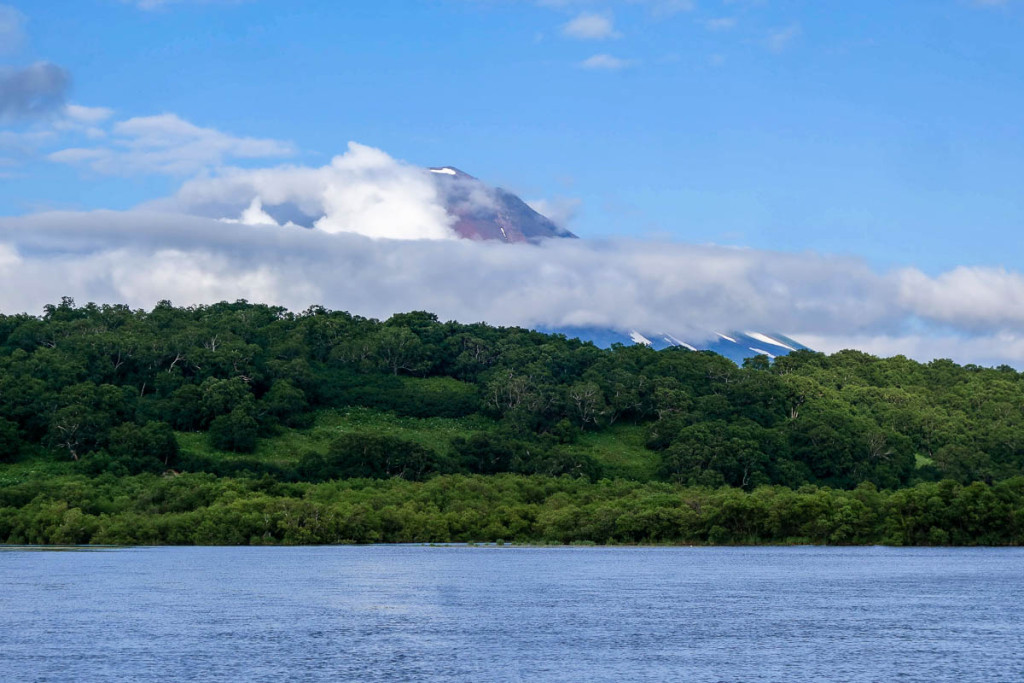