This is one grandiose volcano. There’s no arguing about it.

And the bigger – the better. Or so it seems at first… (more on the downside below). Anyway, we decided almost impulsively to get ourselves to its peak, for the views from up there are sure to be amazing – weather permitting.

Here’s what it looks like from the window of a helicopter, and also from the shore of Kurile Lake: 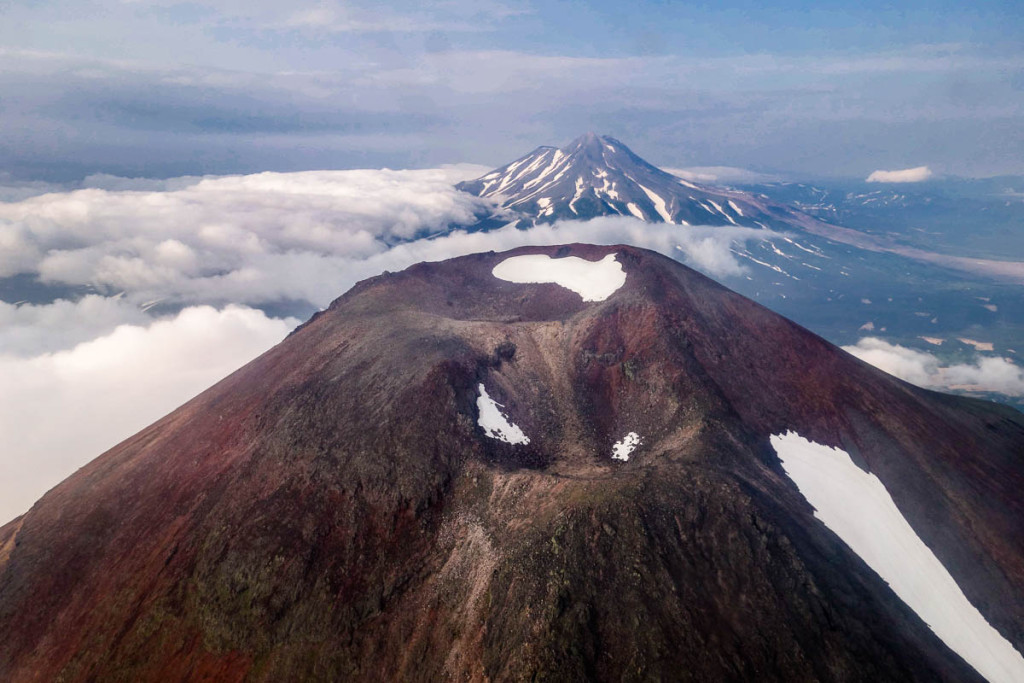 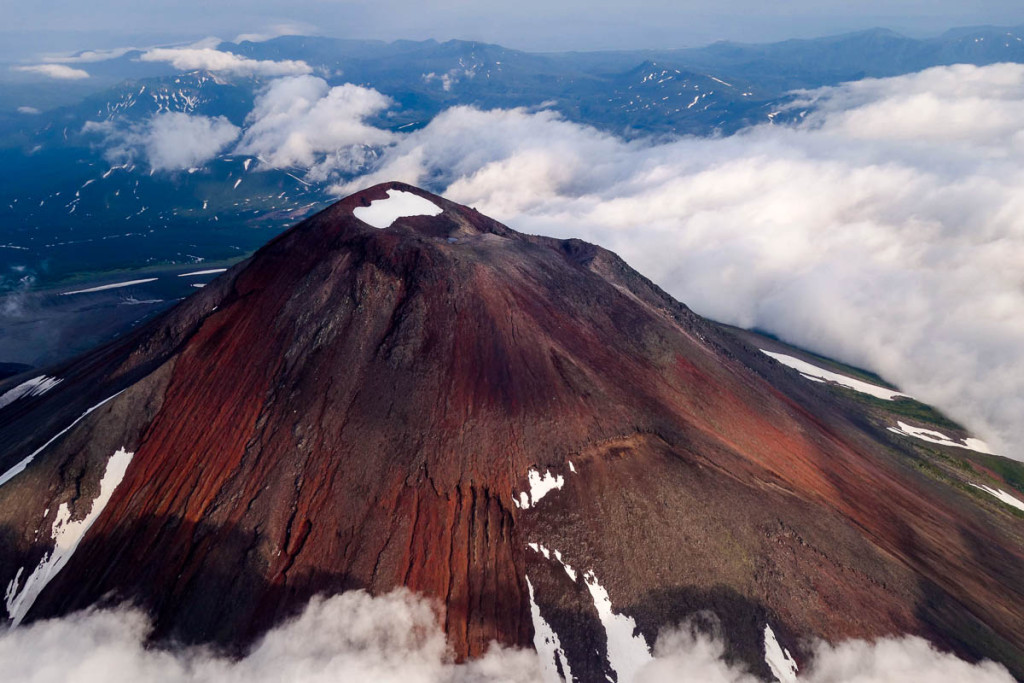 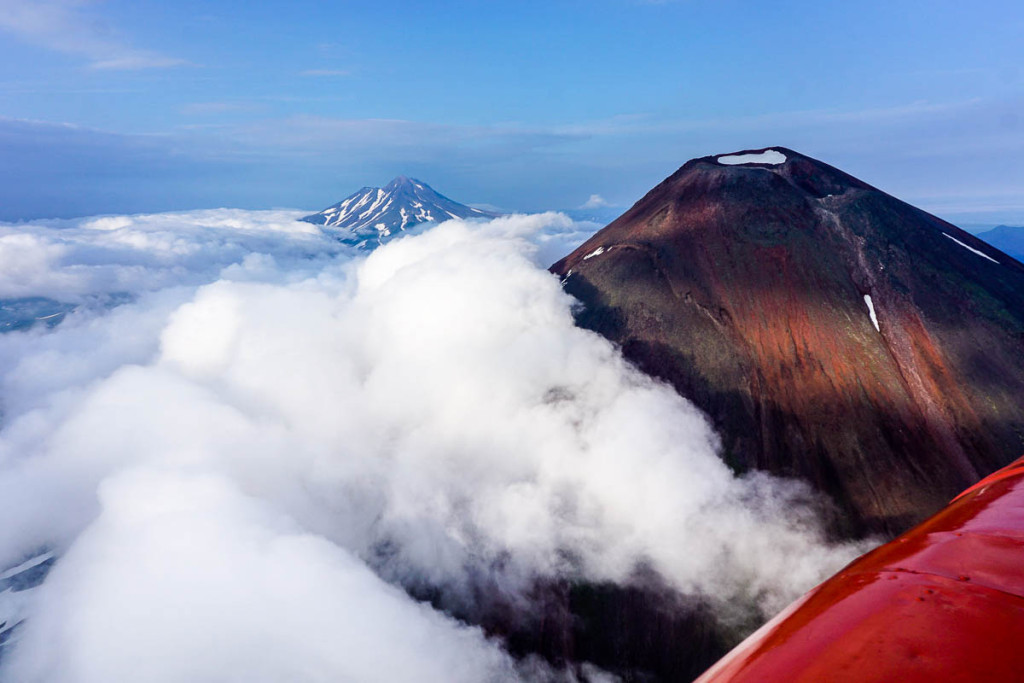 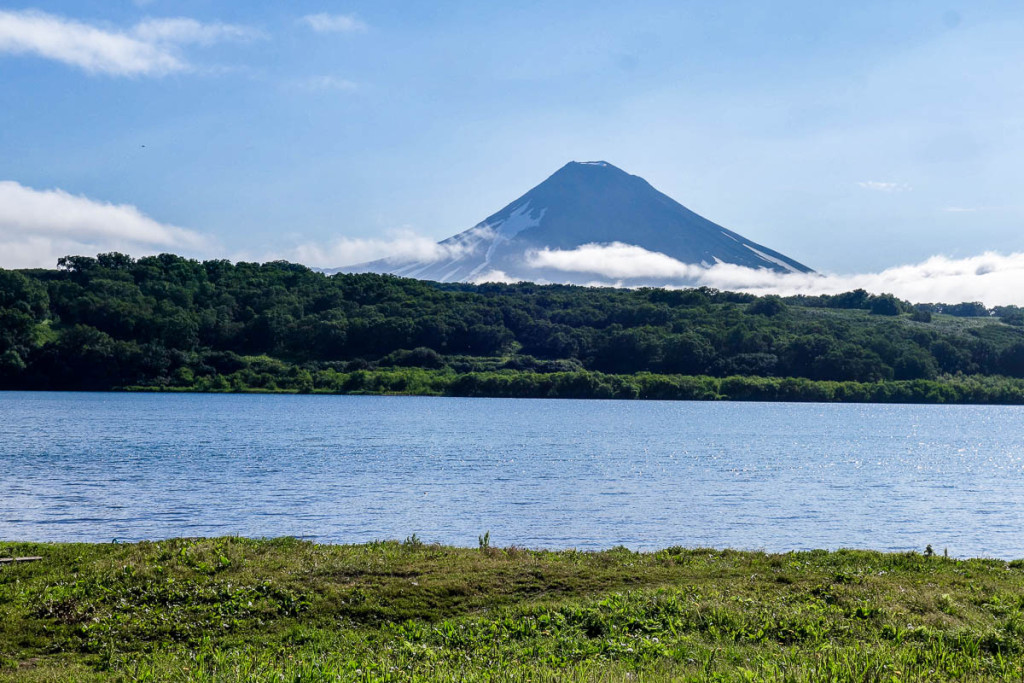 Btw, this mighty volcano became known as Ilynsky only after the Cossacks discovered it. What they were doing in such far-off lands I’ll never know. Hmmm, I also don’t know what it was called earlier in the Itelmen language. Or maybe it wasn’t an Itelmen name. Maybe some other local people lived here. Whoever they were – they were hardy, as the climate here is most disagreeable. Was it the Ainu? Perhaps no one? That wouldn’t surprise me. The climate is so uncomfortable even animals steer clear of the place (apart from the odd wandering bear that’s lost its way). The local flora is nothing to write home on a blog about either. All there is here is fish, fish, more fish, a few bears, and (very) occasional tourists…

…and the occasional tourists this month – that was us. Not just occasional, but ambitious too – for getting up Ilynsky is anything but a piece of cake. Especially for office desk-jockeys like us, who like cake.

Sure enough, our ascent turned into somewhat of a physical endurance test nightmare. It took five hours to get from bottom to top, all of it, naturally, very much in an ‘up’ direction. Many an expletive was to be heard – no, every expletive there is was heard – many a groan, and many a moan. It was tough. There weren’t even any full-fledged stops; just the odd pause to check we’re all together and still alive, a bite of chocolate and catching breath, and off we went further!

What can I say? There’s nothing more really to add to these pics. Oh, maybe this: I hope that every one of you reading this will one day stand here on the rim of Ilynsky volcano! It is, evidently and categorically, a must-see if ever there was one. 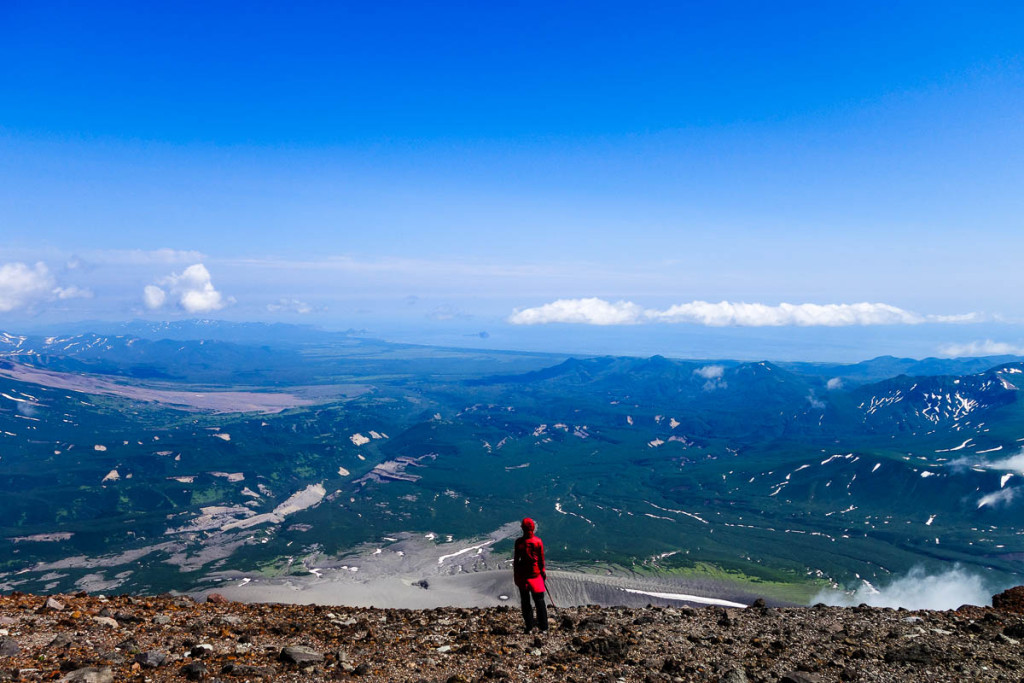 At the very top in the upper crater there’s a stream that flows from the snow into a small… it’s not a lake but a pond – or even a large puddle. Anyway, this small whatever contains unbelievably fresh and tasty water. Ahhhhh. This is exclusive. You only find such tasty water here on the peak of Ilynsky – and only after you’ve just climbed up it, perhaps making it all the more tasty.

There’s one feature of Ilynsky that the common-or-garden tourists most probably miss (we, of course, aren’t common-or-garden tourists). It’s this: If you look down and outwards from the eastern side of the volcano’s rim you can see a big hole at the base of the volcano. It looks like the result of a catastrophic eruption, which literally blew the top off that part of the volcano. Alas, net resources mention nothing about the hole or the event that caused it. And that made me all the more curious: next time we’ll have to get down there and take a closer look. And/or view it from the other side, from the peak of the neighboring Zheltovsky volcano. 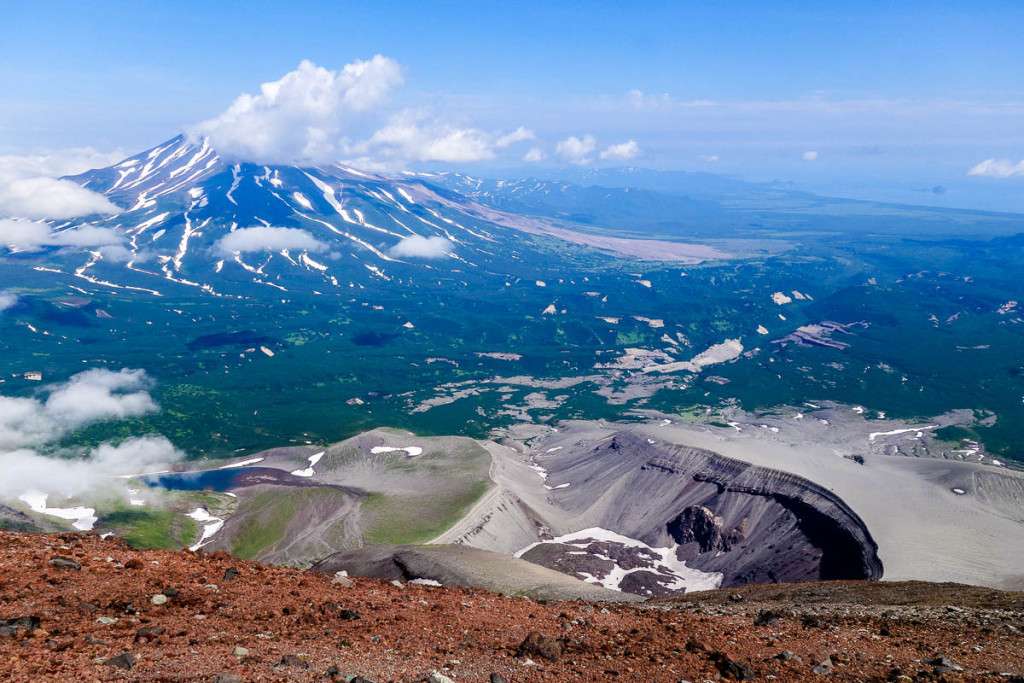 Yes, it looks like this mysterious gash would be best seen from Zheltovsky volcano, which dominates the surrounding landscape here. We’d planned to get up it too, but sadly the weather – you guessed it – had other plans. Oh well. Next time: deffo climb.

You may be wondering how we got to Ilynsky. I mean – to its base, from our ‘base’. The answer’s simple, if a little bourgeois: helicopter!

However, it was by no means all plain sailing choppering. The plan was for us to be dropped off as near to the volcano as poss. But aforementioned poor weather meant visibility was real low, so, after flying this way and that for a good while, we were dropped god-knows-where and told that we’d just have to make do with that! Not that it was the pilot’s fault: respect due to him for managing a landing at all. Only problem: ‘er, so, where are we?’.

As you can see from the pics we were dropped on thick thicket!

Next day, after camping the night near the top of the volcano, our descent back down the volcano-side was swift, as we wanted to get back to the chopper asap and back to civilization after such a tiring day’s trekking. So down we sped, down, down, through the bush and across the snow, eventually coming out near a lake…

… however, one thing was missing from the shore of said lake we were on: said helicopter.

Now, waiting a while on a lake shore might normally seem like a pleasant activity; you might even catch some fish while you wait. However, this was Kurile Lake, and we’d a lot higher chance of being the catch ourselves – of grizzly bears! Oops. 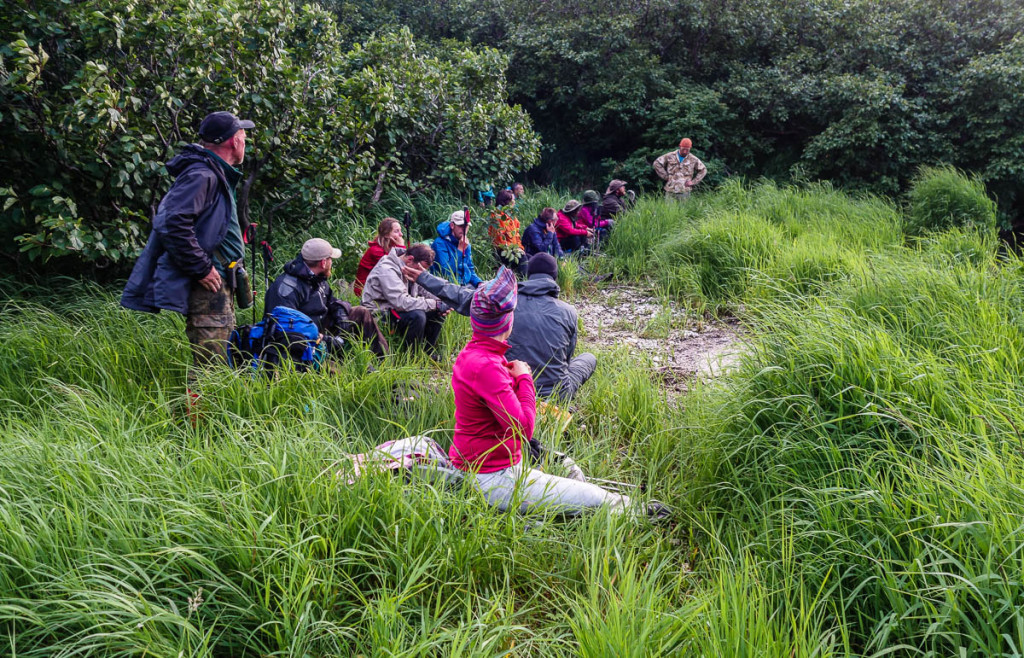 It turned out that not only had we just spent the night on a bear path, but had descended into – and were now sat smack in the middle of – a bear’s lair! Yep, we looked around and saw how four different bear ‘highways’ converged where we were located! If the film ‘Stranded in Bear Lair’ ever existed, it would have been filmed right here!

We naturally didn’t want to hang about, so we walkie-talkied the chopper. No reply. So then we set off flares!…

That I’m writing this now I think demonstrates that eventually we were found and choppered out of that bear habitat before being eaten up by hungry grizzlies. The details of our ‘rescue’ were quite fun too, but more on those in another post…

All the An-Kam pics are here.