Time to move from all things on-land to all things just off it – to the more attractive sections of coastline, for we were told the best natural charms of Kimberley lie on or near its shoreline. From Broome (the region’s ‘capital’ if you missed it earlier, also our base) the nearest bit of awesome ocean-ness is up at Buccaneer Archipelago, just under 250km away.

What a place! Countless islands, islets, cliffs, straits, bays, an almost turquoise tropical ocean, and impossible horizons. Wikipedia reckons there are more than 800 islands here. But I don’t get how they can be counted accurately: when the tide is low some tiny islets may emerge; when high – they’ll disappear again… 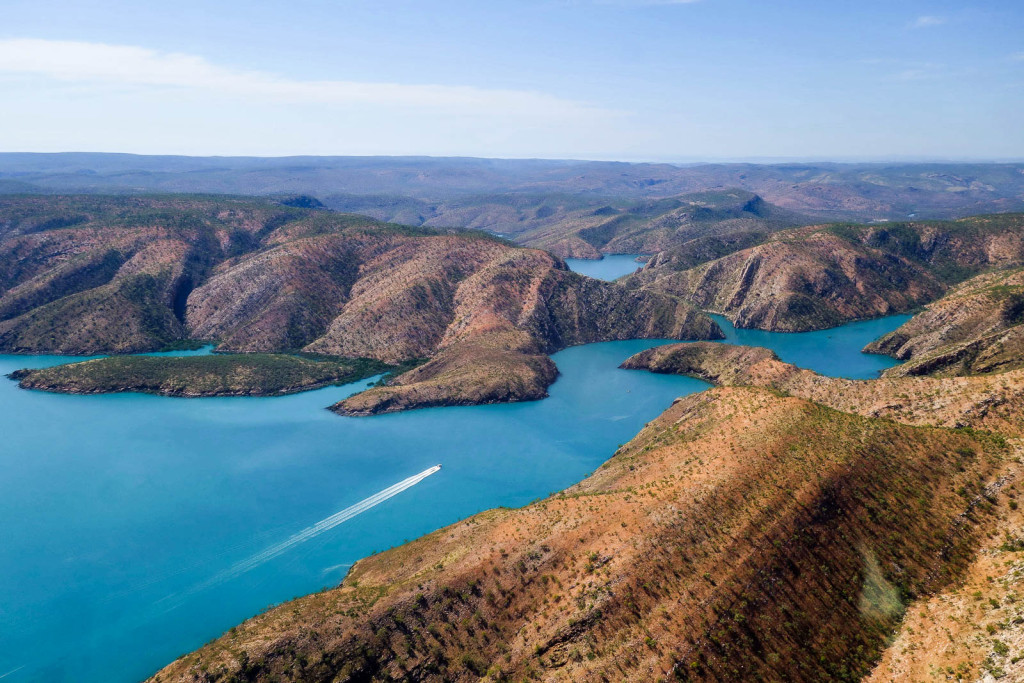 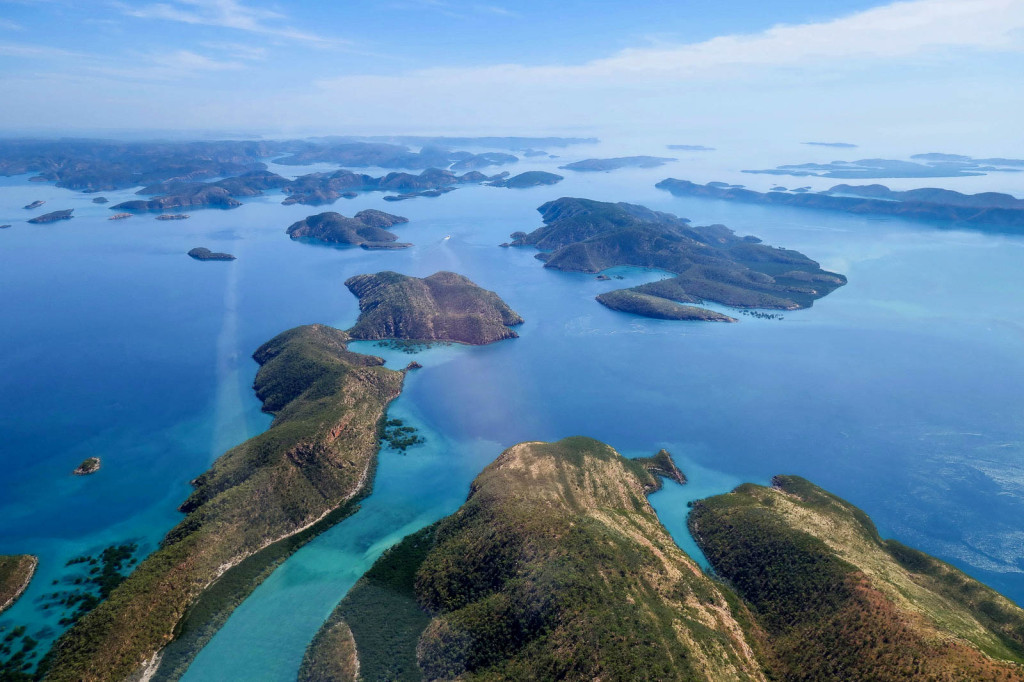 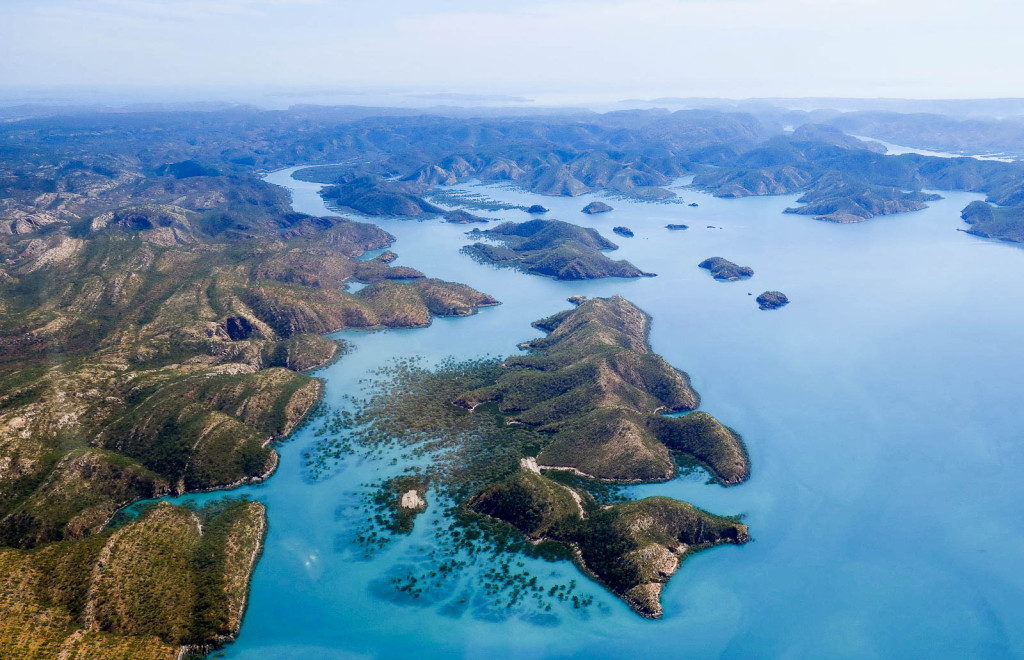 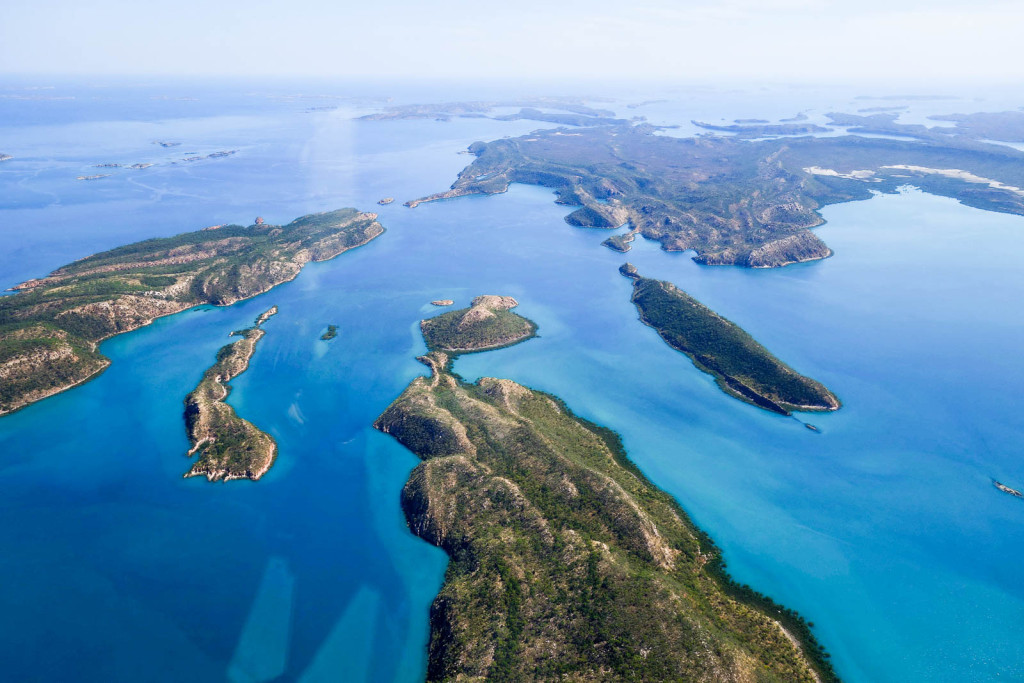 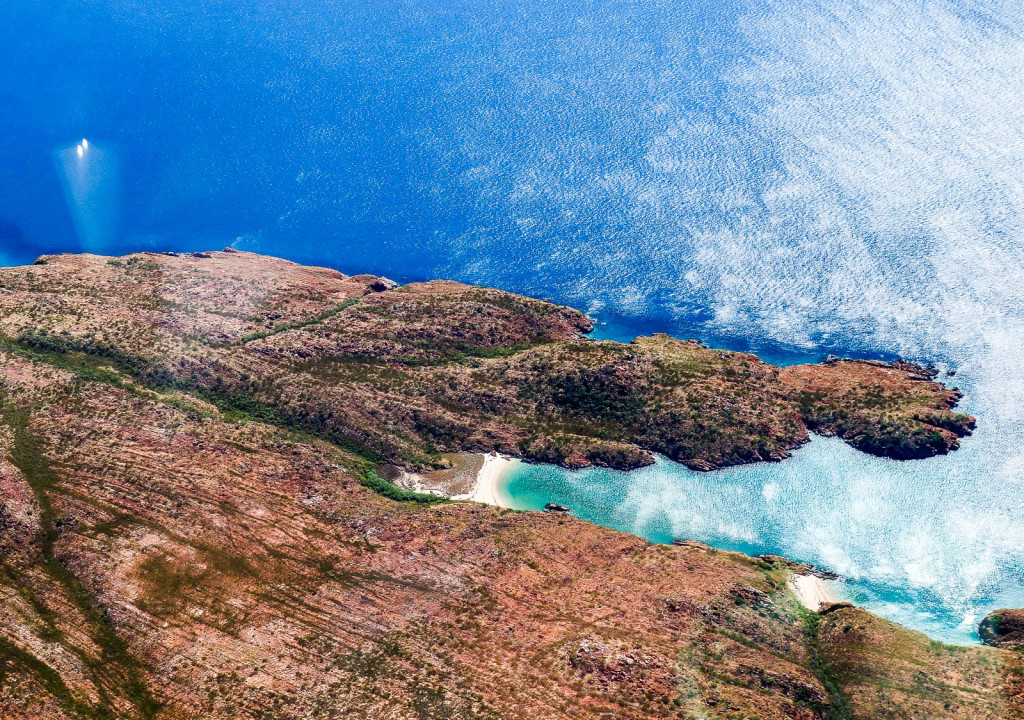 Our guides told us (and Wiki confirms it) that the cliffs here are more than two BILLION years old! Back then life on Earth was all still only single-celled, but these rocks already existed!! (Generally, the geological history of Earth – a fascinating topic!). 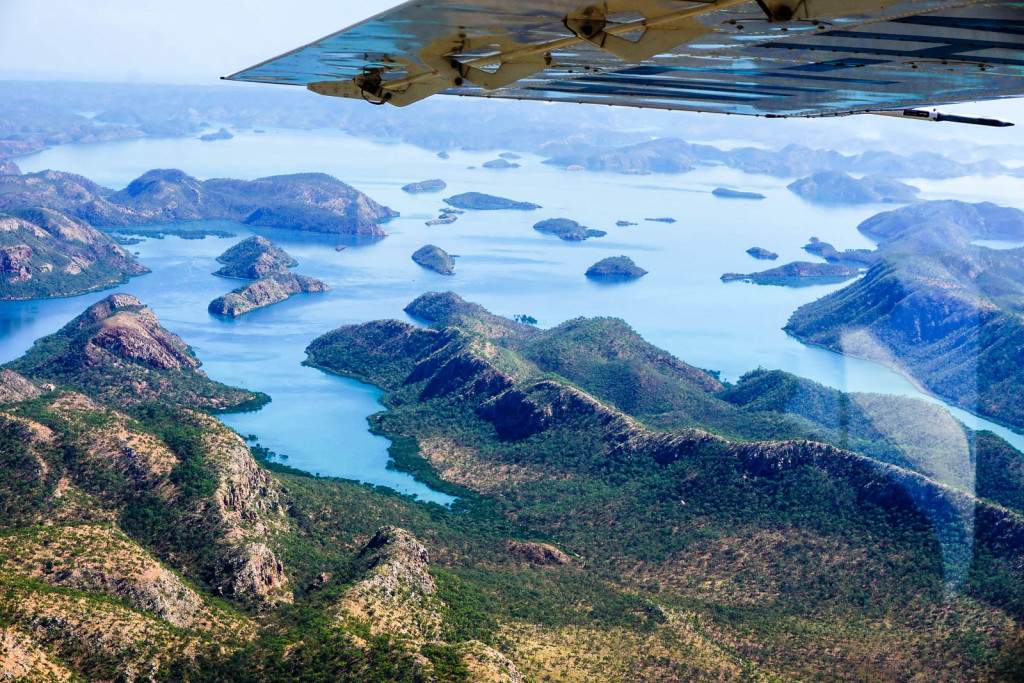 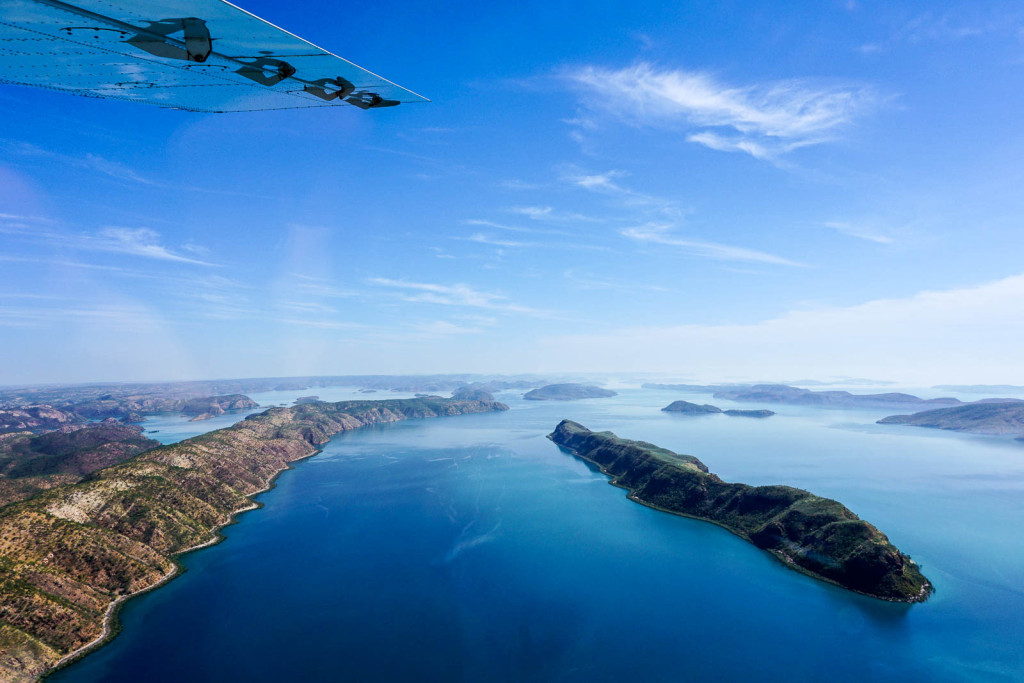 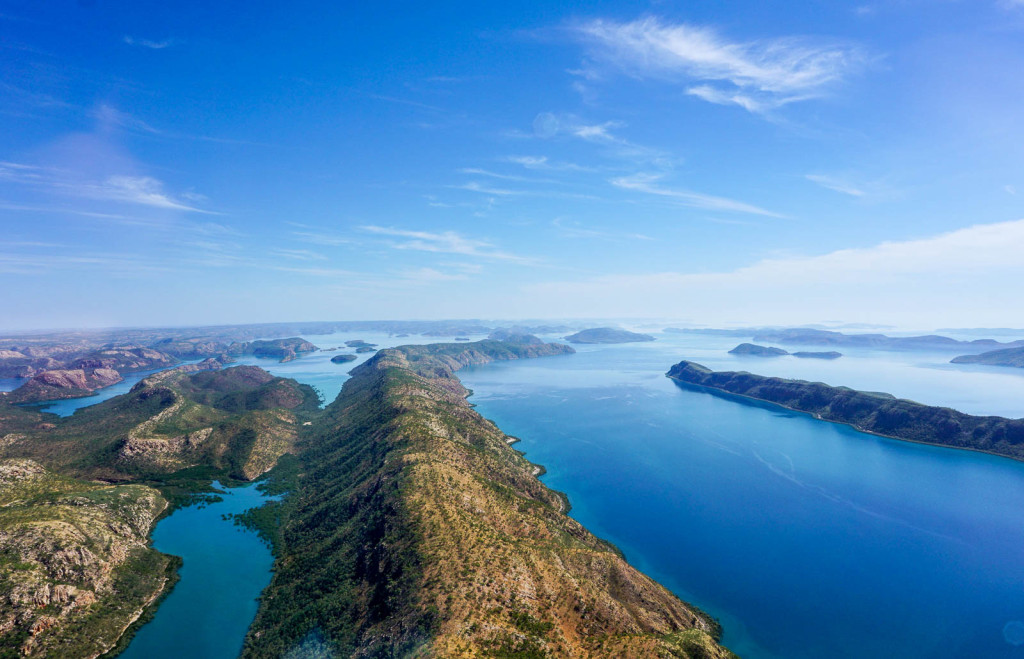 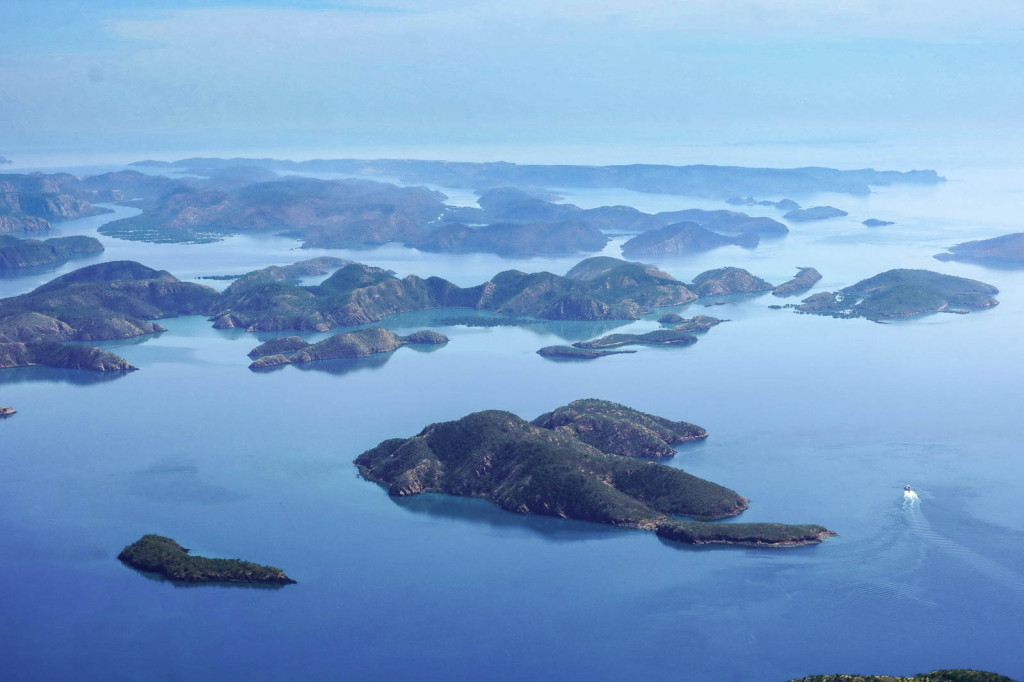 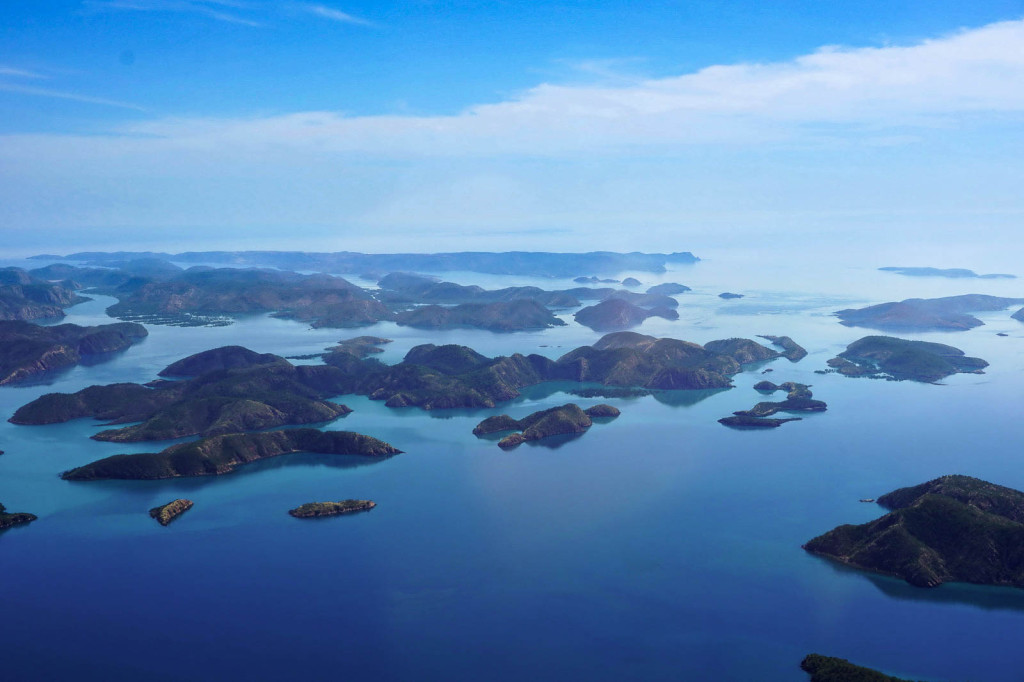 But the main attraction here…: the Horizontal Falls.

This unique phenomenon isn’t quite a set of waterfalls, but a feature of extreme tides which can go up and down by 12 meters, causing a rush of water going one way through two narrow gorges into the neighboring lake as the tide rises, then the other way when it falls. Because the gorges are so narrow the effect looks like a waterfall, only horizontal. Bizarre! 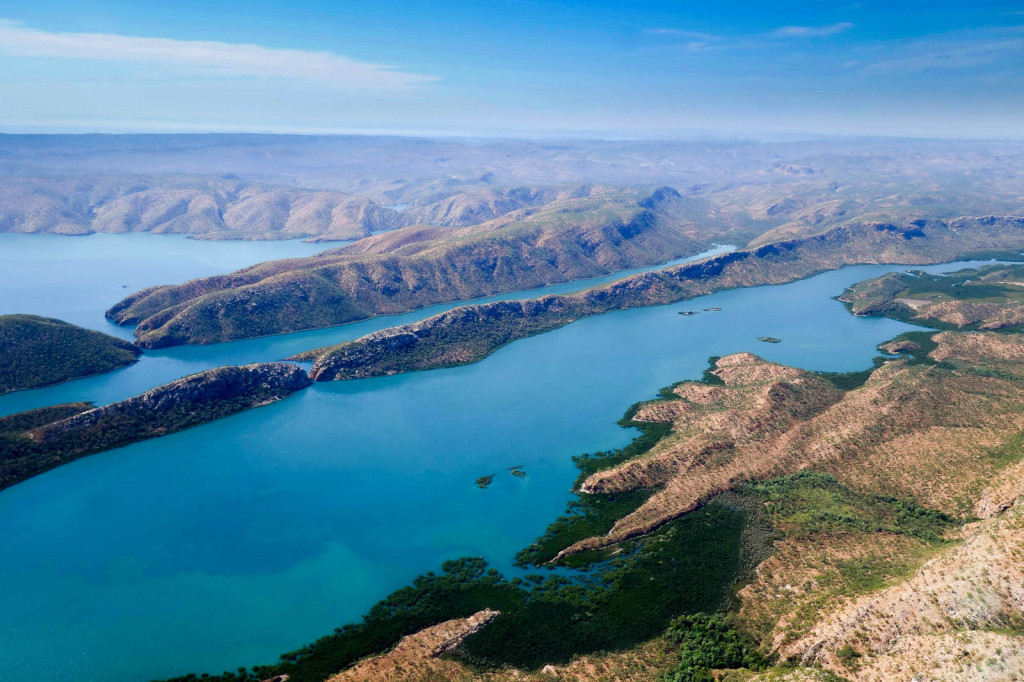 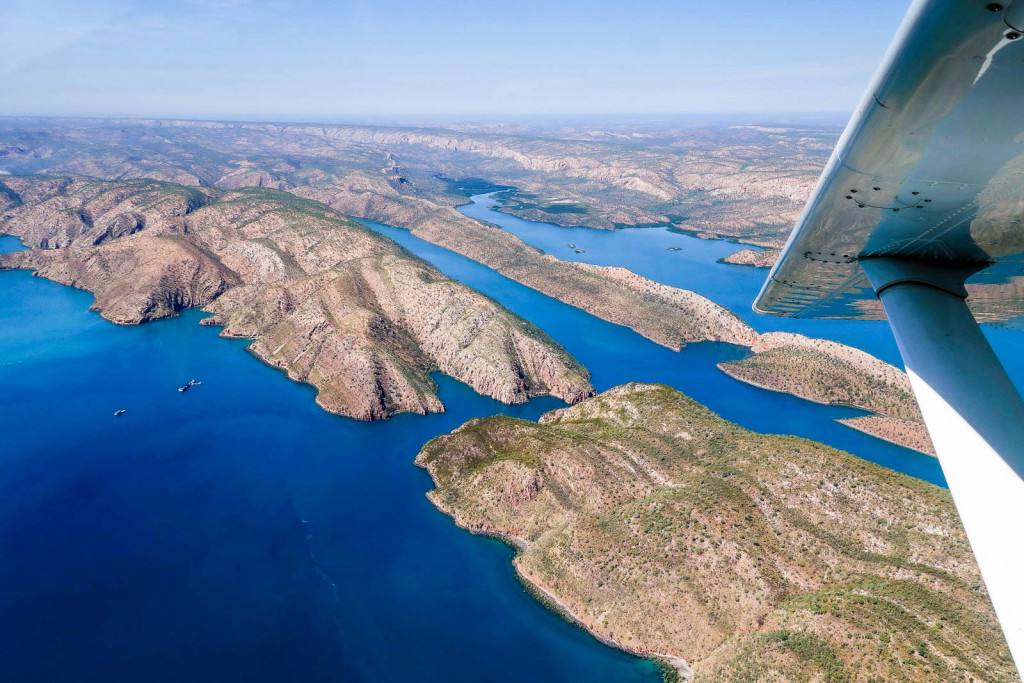 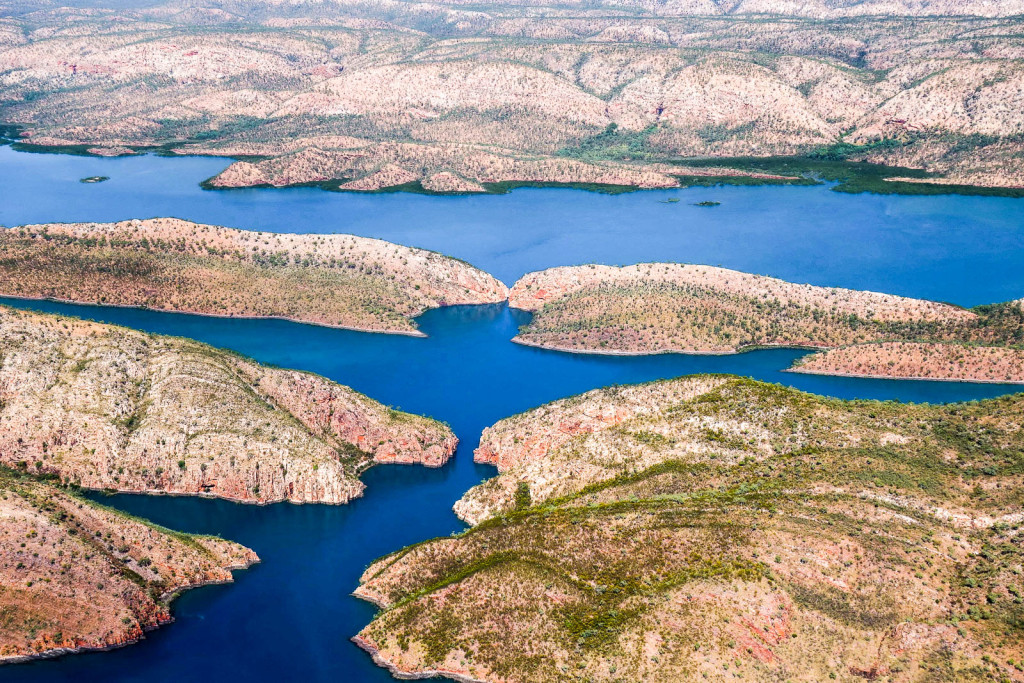 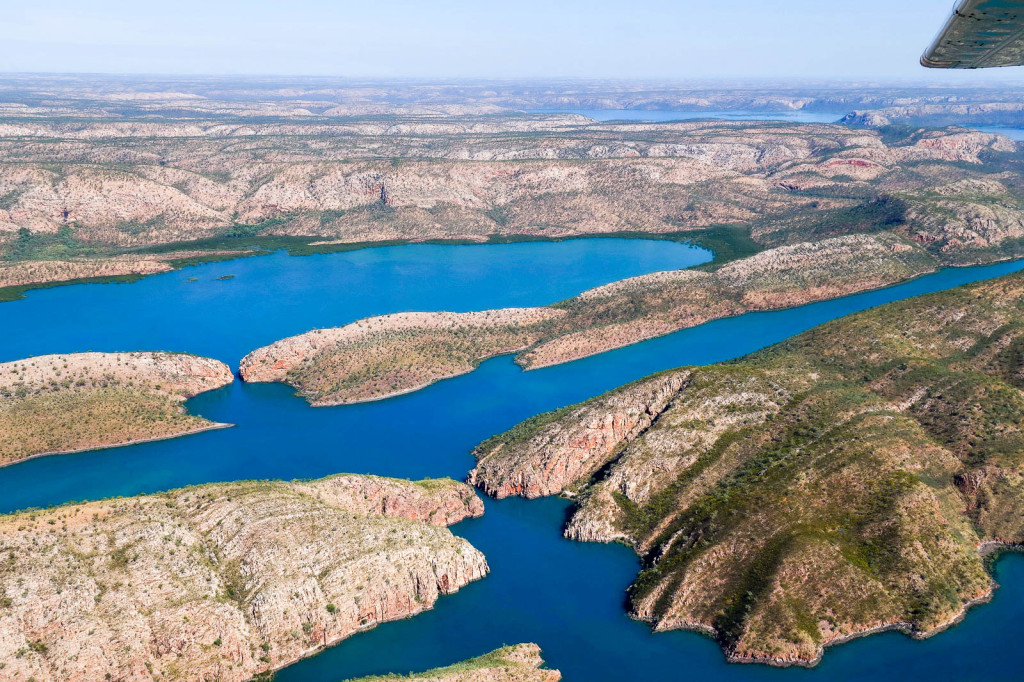 Alas, we were unlucky with our timing. We arrived when nothing much was going on – no tides doing their jig to cause the rush of water. Boo. You could say we didn’t see the Horizontal Falls at all. And you’d be right. Sob. 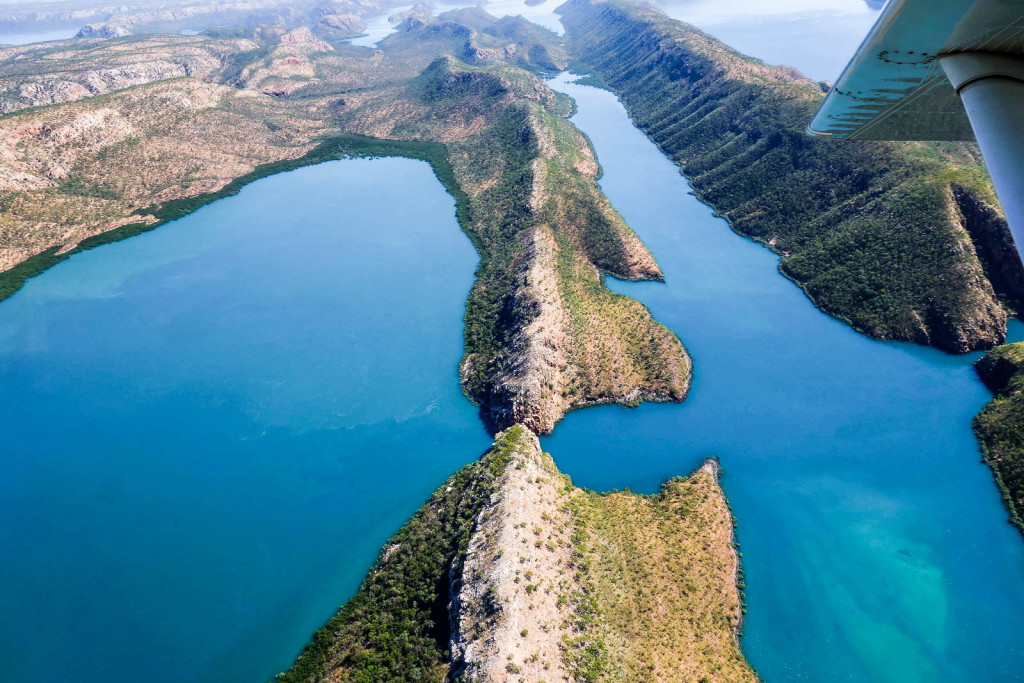 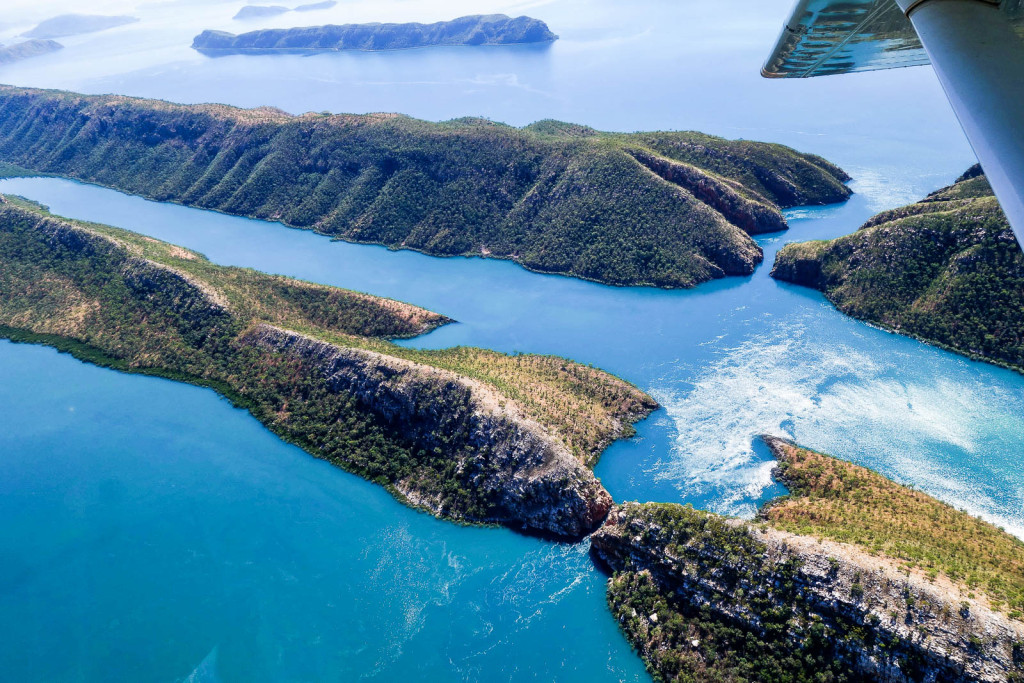 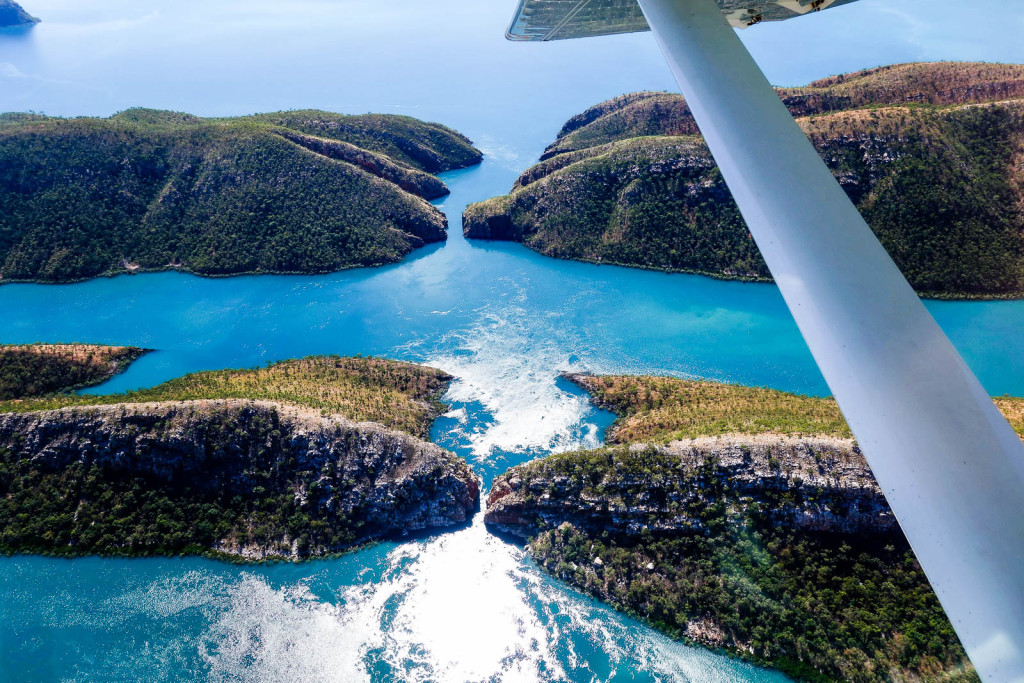 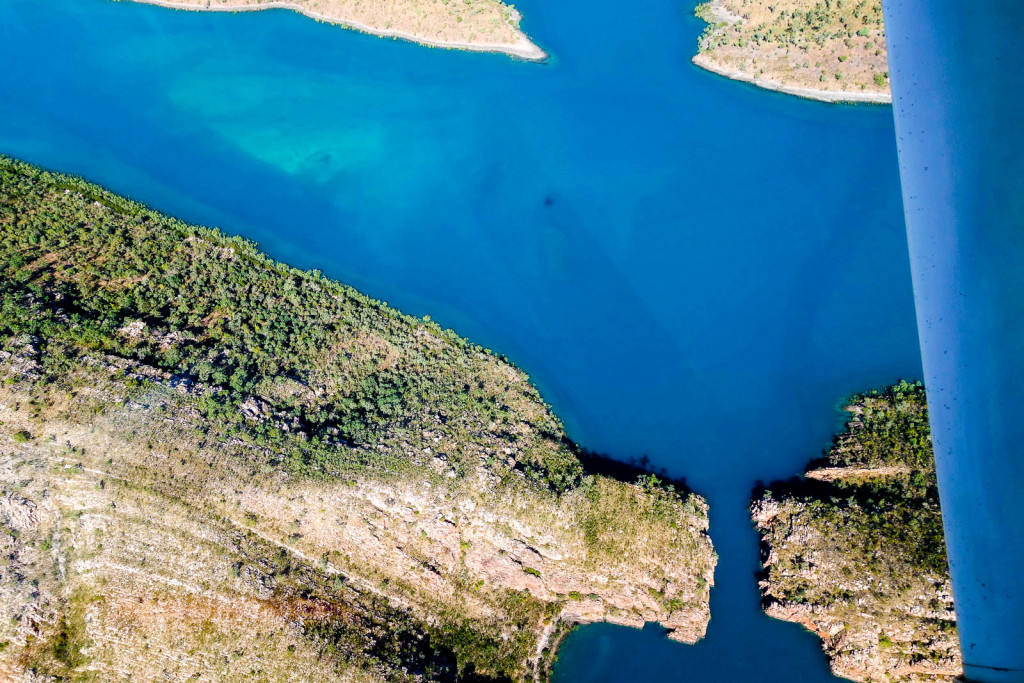 [Still sobbing]… But at least we now know that it’s best to get here not on a plane but on a ship, boat or hydroplane and then wait for the tide to witness the full spectacle. And that needs to be done at times when the very highest and lowest tides are to be seen: when there’s a new moon or full moon. For the moon here is key: it and it alone decides the lot of tides – how high, how low, how quickly they rise and fall… This universe, eh? Truly mind-boggling. (NB: If you’ll recall, this series from Kimberley started with a decidedly lunar theme; nice to continue it:).

With tides a-torrenting and when the moon is either invisible or fully lit, the Horizontal Falls look like this: 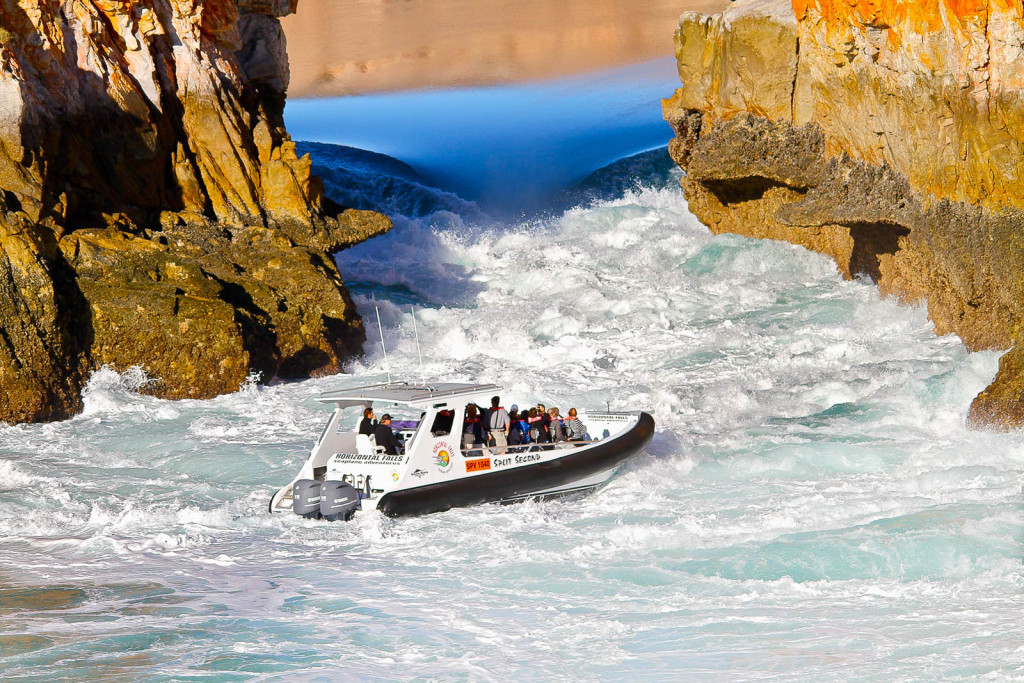 Not far from the Buccaneer Archipelago – about 100km west of the Horizontal Falls – there’s another magnificent maritime marvel: Cape Leveque. Beaches, cliffs and singularly superb seaside sights. There are also unique natural features, like the ocean waterfall of Tallon Island (here). 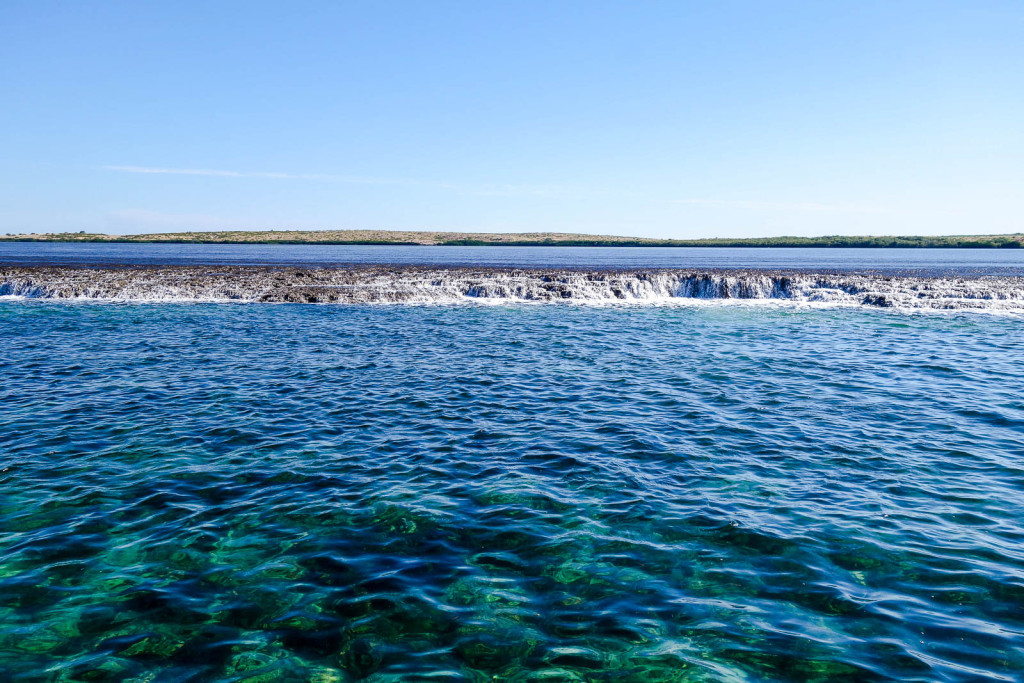 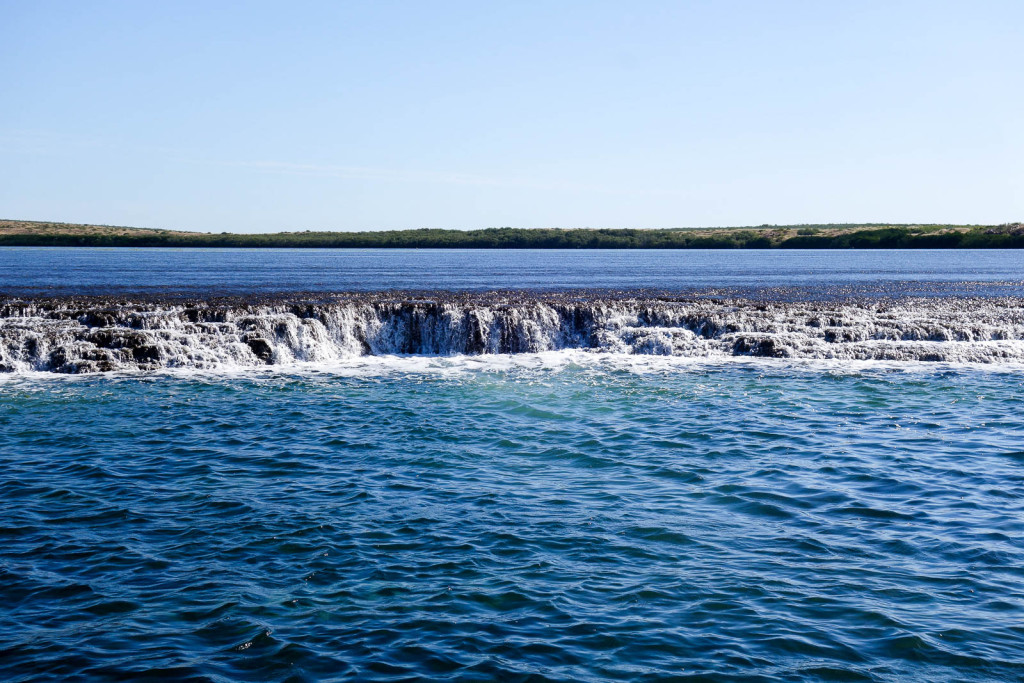 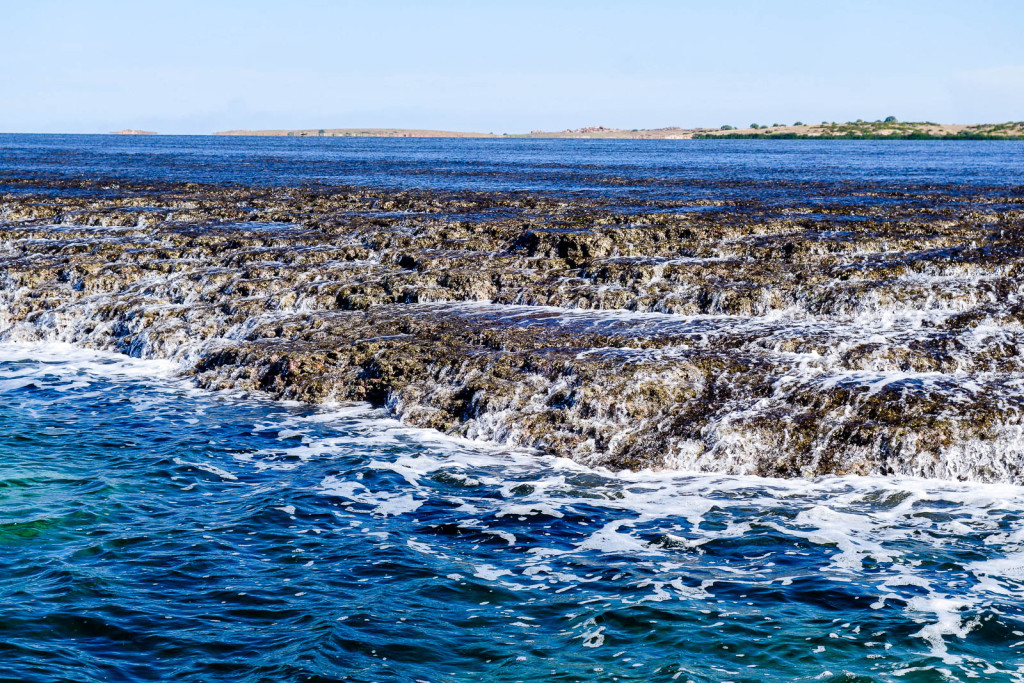 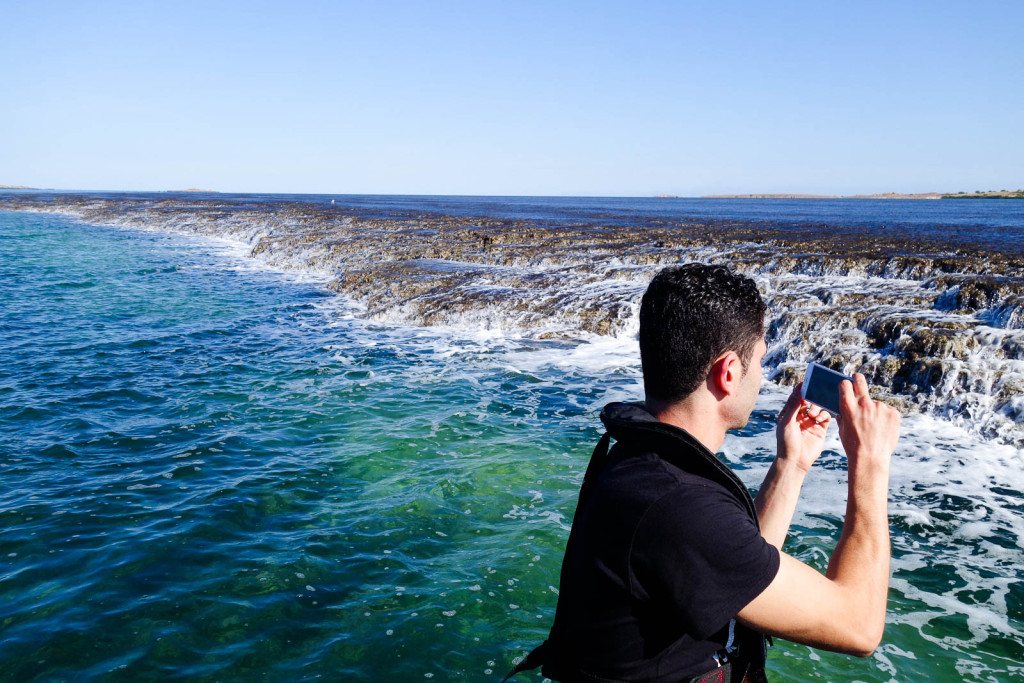 An amazing phenomenon! A huge ‘bowl’ formed out of coral around a kilometer across (at its widest). Extreme (10m+) tides here too play a central role: they fill the bowl with seawater when rising, then that water flows over the side of the bowl when falling. 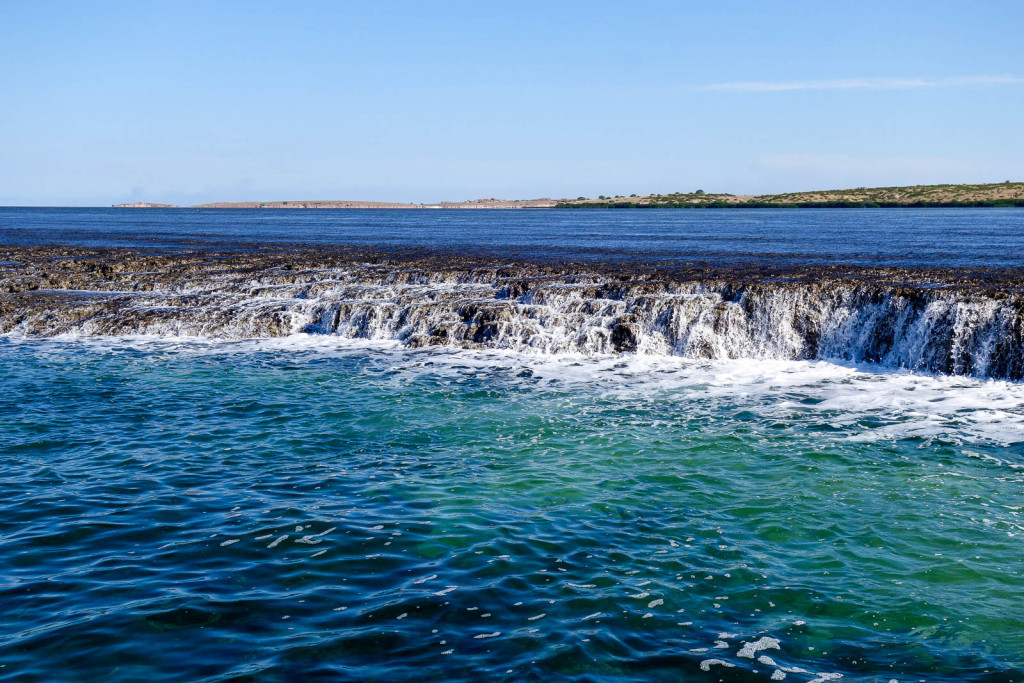 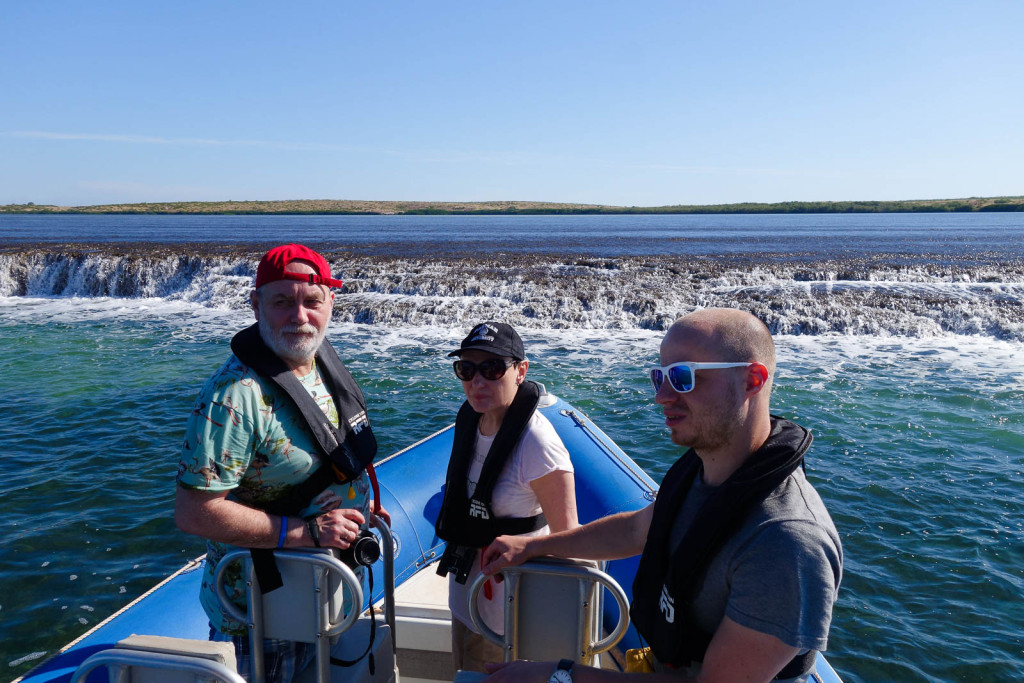 Most interesting. Amazing what Mother Nature thinks up, if only to impress tourists who’ve lost their way!

Incidentally, we fancied walking around the rim of the bowl. Our guides on the other hand seemed dead against it: ‘Crocs, mate.’ They told us. ‘Sea crocs – they’d eat you up whole!’ We reflected long and hard on this, and after much deliberation reluctantly decided to take their advice and not venture bowl-wards. Never mind; there was plenty more for us to see here…

…For example, another extreme-tide-themed phenomenon…

Huge quantities of water quantity fill up and then drain all the channels among the islands in King Sound. But just how much water are we talking here?…

…Well, the area of the sound (= gulf) is 100×50 = 5000 square kilometers. Multiply by 10 meters of tidal surge… Woh! 50 cubic kilometers of water, if my arithmetic is right at this late hour as I write these here words. And with a width of the ‘neck’ through which all this volume passes at around 20-25km, the resultant natural phenomenon is out of this world: The water gushes past the islands, swirls up into whirlpools, and spurts in streams along and across swaying the motor boat to and fro violently: a white-knuckle ride in white rapids, no less. Alas, this is all unphoto-able.

// It’d be interesting asking hydroelectric pros: 50 cubic kilometers of water toing and froing – is that really quite impressive or just a typical occurrence?

Those prehistoric red rocks are all around here too – those ones that are more than two billion years old! The mind truly boggles. All this is seen and touched and ‘ingested’ slowly. Then the mind just gives up taking in any more as it just can’t (aka boggling, I guess). 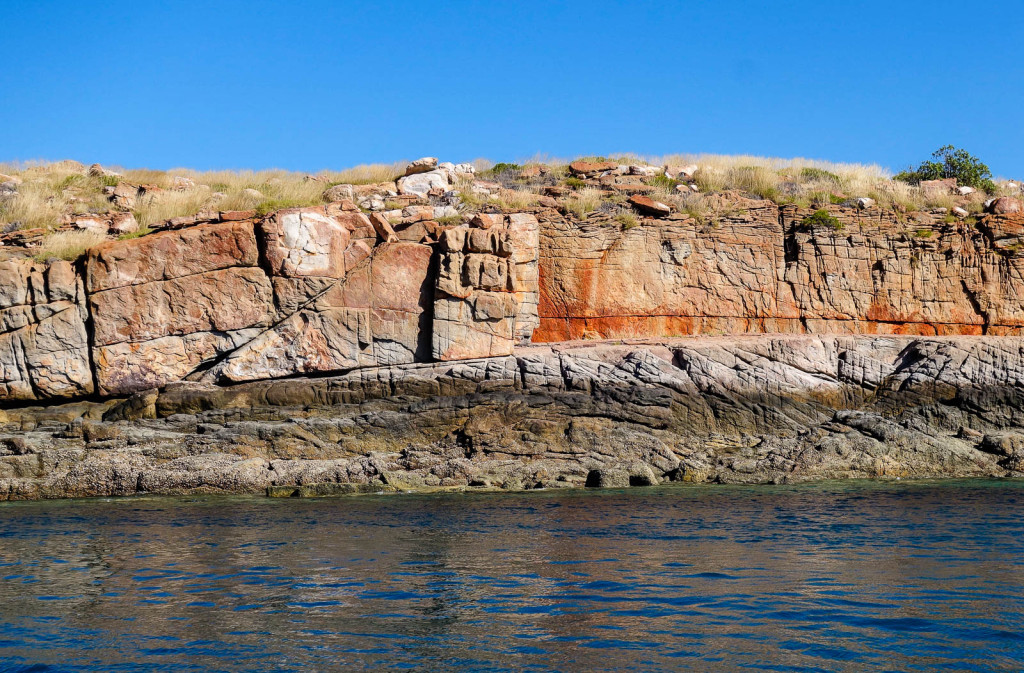 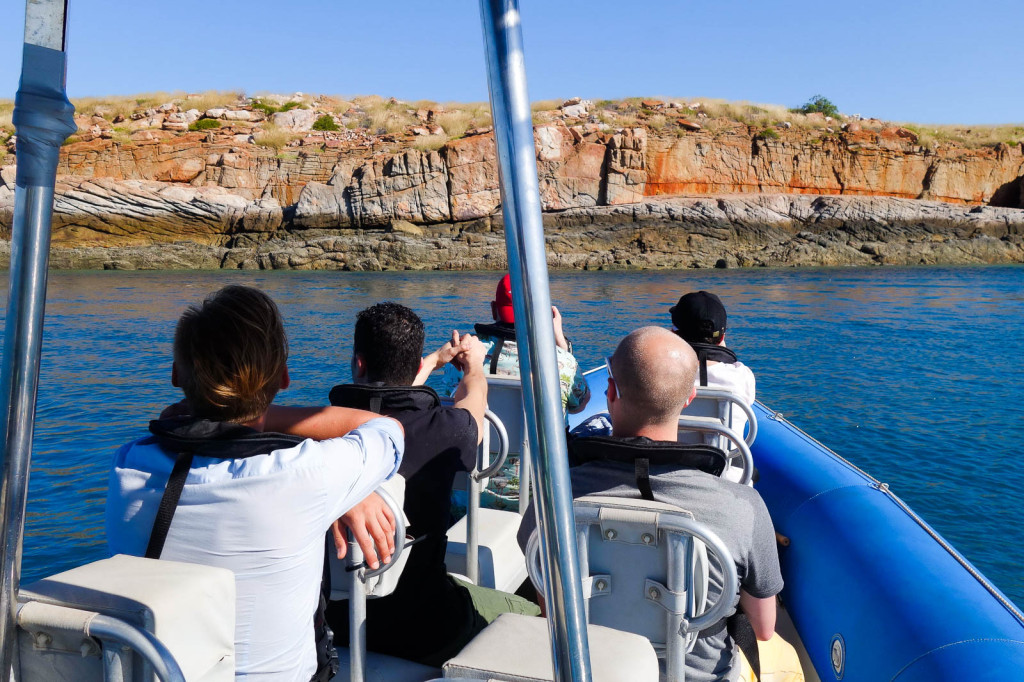 Boggling is always best done before lunch. Then afterwards a spot of shopping is the ideal pastime.

Btw, you can easily get sunburnt here if you’re not careful. I mean: burnt to a cinder. So cover up, factor-up – or suffer. On the water it’s best to wear either your swimming gear or some waterproofs: the waves get quite choppy and spray the deck constantly. 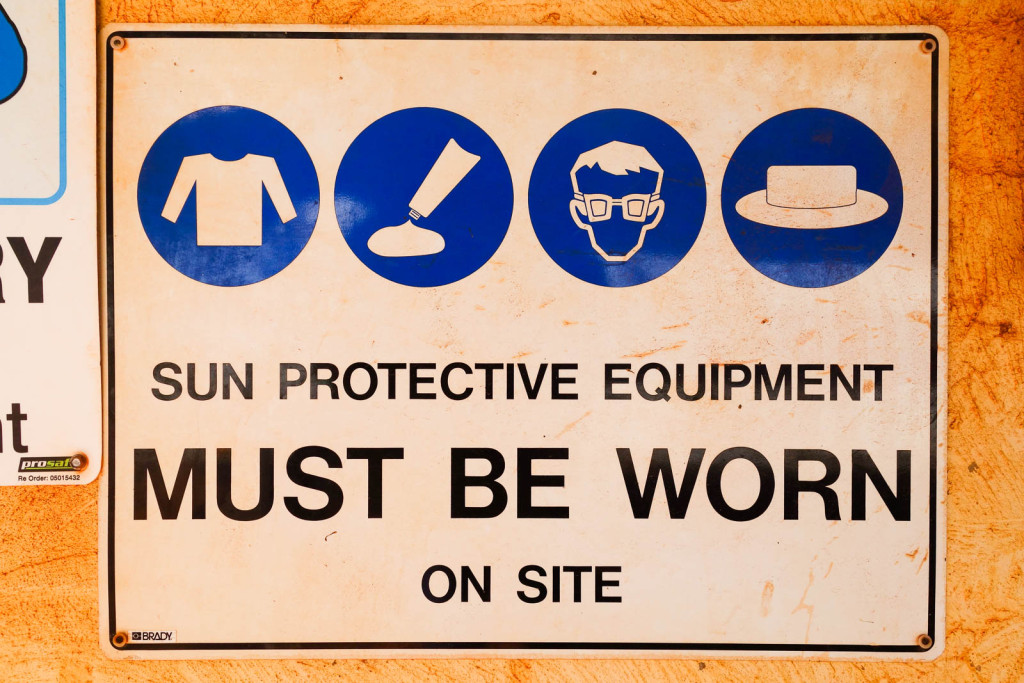 Kimberley-5 already? Ok, just two more, then I’ve got something even more fun coming up: detailed updates to my Top Must-Sees of the World, Ever!…

Back soon my kangaroos!