By way of a preface:

Without looking on the Internet, who can tell me which is bigger: the Moon or Australia? 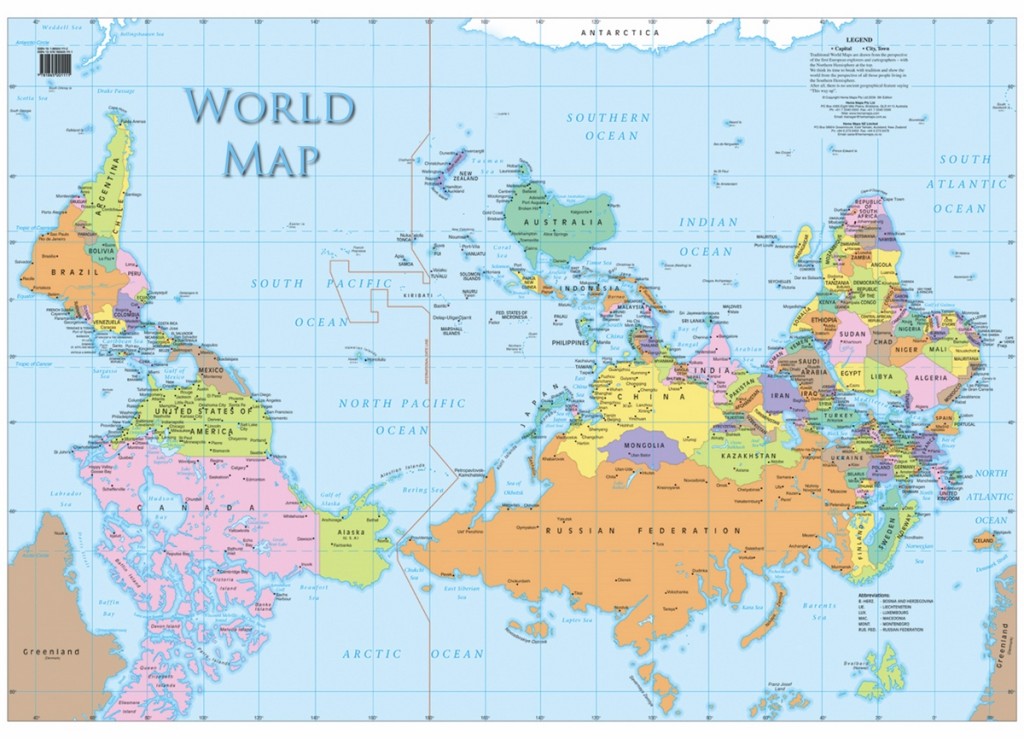 This is the first in a mini-series of posts on Kimberley, Australia!

I’d heard a lot about this place. That it’s impressively beautiful, with scenic landscapes and fantastic views. But that it’s also huge, hard to reach, sparsely populated, and has almost no roads. Plus it’s red hot all year round because it’s in the tropics. All that turned out to be true, but all the same, hardly anyone really knew much about Kimberley because they’d never been there. Folks had heard this or that about it, but no one could give me the real scoop on where to go or what to see.

So it was my job to lead the scouting party. We recently spent three days in and around Broome, and now I know almost everything about the place – and I’m eager to share this knowledge :).

Everything I saw and snapped and touched made a big impression on me, so I’ll write about all the main bits in stand-alone installments in no particular order.  If you want you could read them all later and piece the jigsaw together for yourself; it’ll be worth it.

Australia is stupendously massive. The country’s dimensions are around 4000 km from western edge to eastern edge, and 3000 from north to south. That’s almost the distance from Brest on the Atlantic coast of France to the Urals in Russia across, and just ~500 km less than the distance between the top tip of Finland down to Athens, Greece vertically. In effect, the territory of Australia is pretty much equivalent to the whole of Europe.

Australia’s ‘waist line’ is slightly larger than the Moon’s diameter. The Moon, unlike Australia, can be routinely visible to all inhabitants of Earth who, if only occasionally, direct the optical system incorporated into their heads up into the sky :).

But this stat might really shock you: the Moon is almost 3500 km in diameter – which is 500 km less than the fattest bulge on Australia’s ‘waist’! 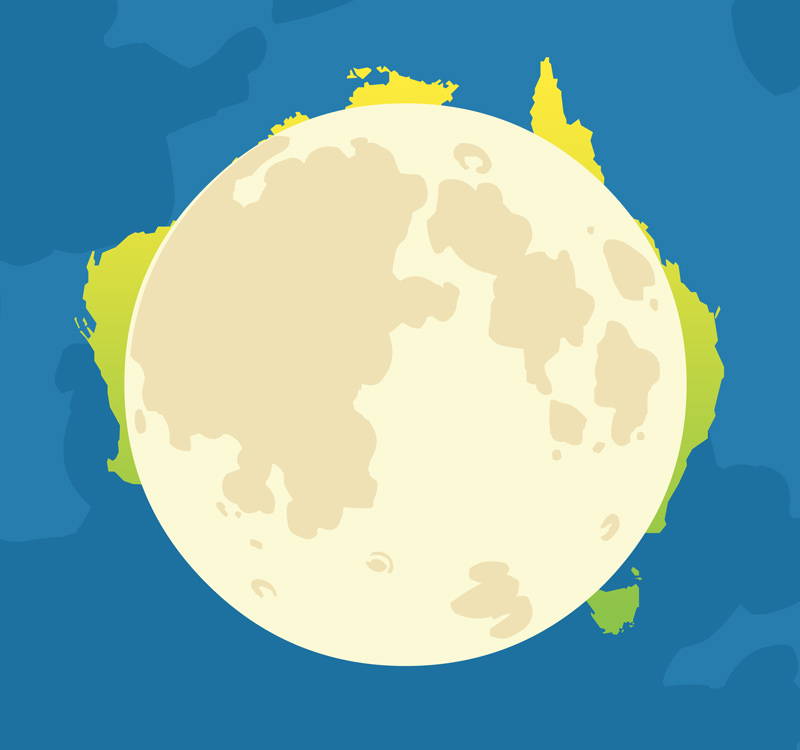 The local residents joke that putting the Moon on top of Uluru would be a great tourist attraction. Who am I to doubt it?

Here are two photos of the Moon and Uluru. The second photo came from an Austrian photographer called Tomash whom I met along the way (a great chance encounter; unfortunately I lost his contacts. If you’re reading this – get in touch!). 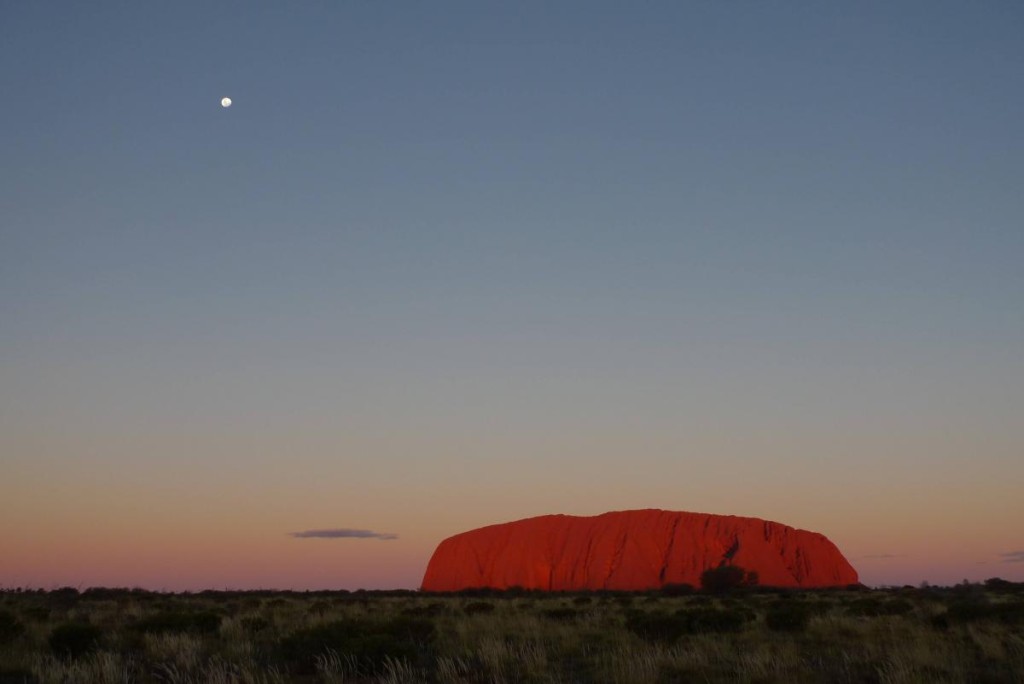 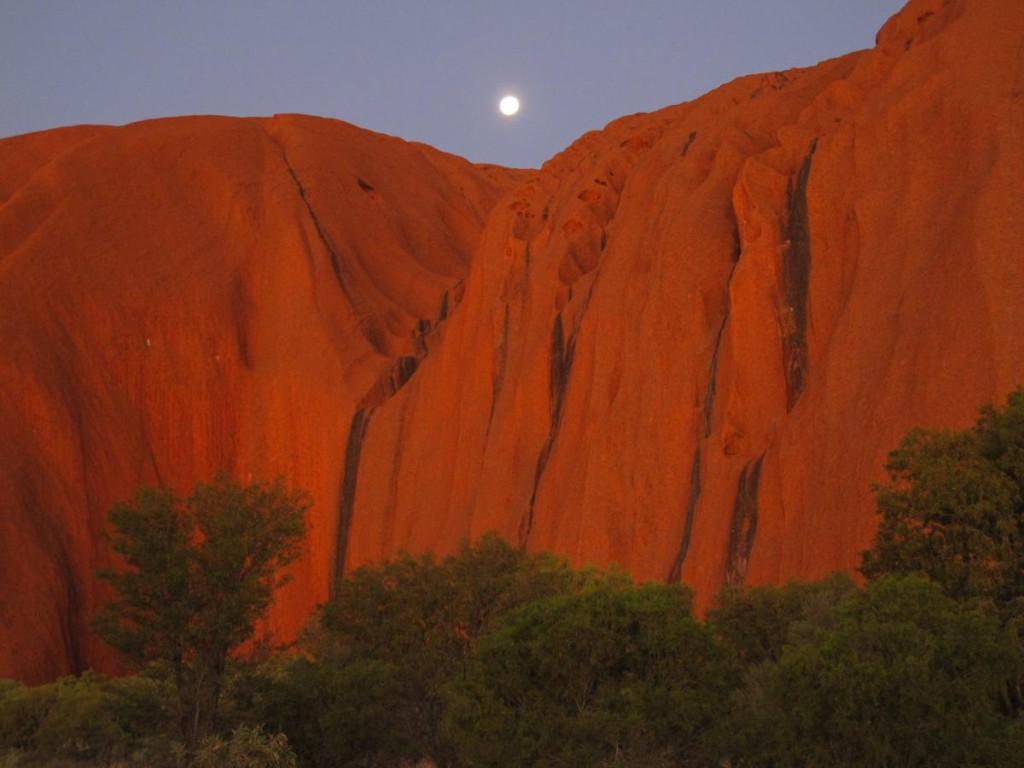 Australia is so big that when tourists fly back to Europe from Sydney or Melbourne they’re shocked to hear that, after five hours of flying, they’re only just about to leave Australian airspace! (Personally I’ve never heard this; I’m always asleep at the time:).

So that’s Oz’s overall size dealt with. Now let me tell you about Kimberley in particular.

Kimberley’s territory is some 400,000+ sq.km, which is larger than, say, Sweden, Japan or Germany (each taken alone) or, say, Greece and Hungary taken together. For comparisons with other countries, go here. And you thought it was a small corner of the country?! 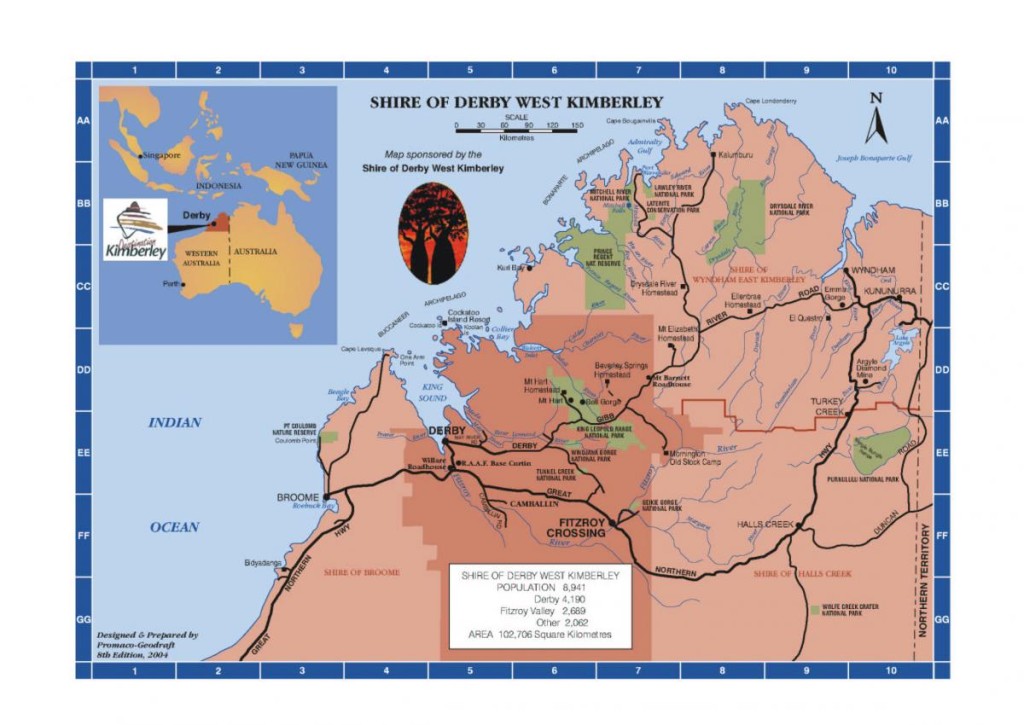 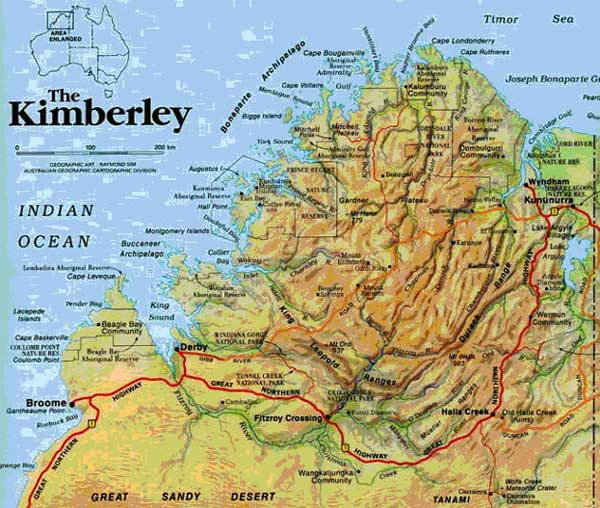 Kimberley’s population stands at around 50,000.

So, for those who aren’t paying close attention, that’s fifty thousand people on four hundred thousand square kilometers of land!

That’s something like a small town spread across a titanic territory!

That works out at about 0.12 folks per square kilometer! Not bad. Really not bad. The population density is three times less than Russia’s Yakutia, the famously colossal chunk of remote Siberia! It’s four times less than that of Alaska, and 30 times less than of Canada. Is anywhere less crowded? Actually yes. If we look at Chukotka, the Russian province just across the Bering Strait from Alaska, Kimberley is much more densely populated than that frosty outpost.

Kimberley has fantastic views, and a whole stack of unexpected and unique natural features. I mean really lots of them.

There’s just one problem: it’s really difficult getting there, even just from the country’s ‘capitals’. From capitals of other countries?… Well, just try searching for a London–Broome flight. Or Moscow–Broome. Well, there you go… By the way, this is what the airplanes that service this neck of the desert look like: 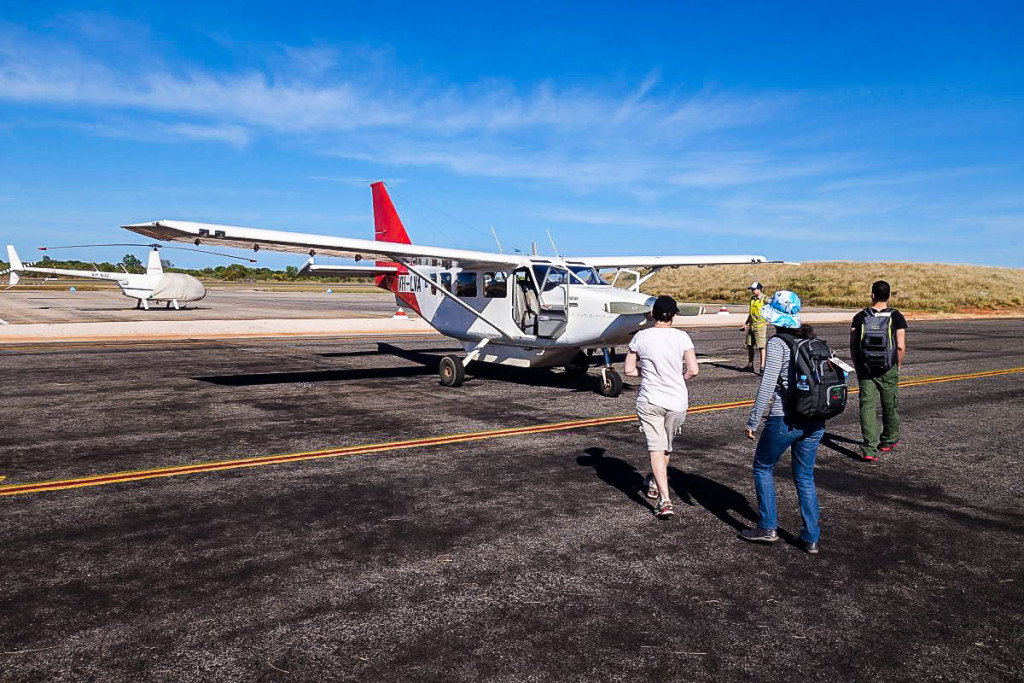 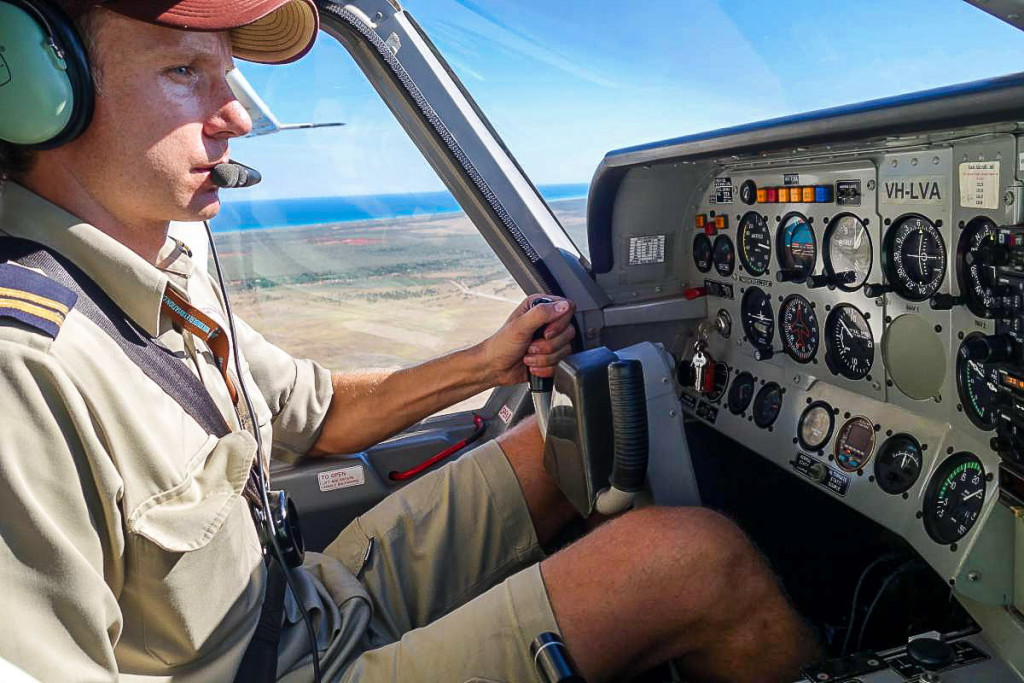 Here’s a bird’s eye view of Kimberley’s capital, the home to a quarter of the region’s population. Ready for take off? 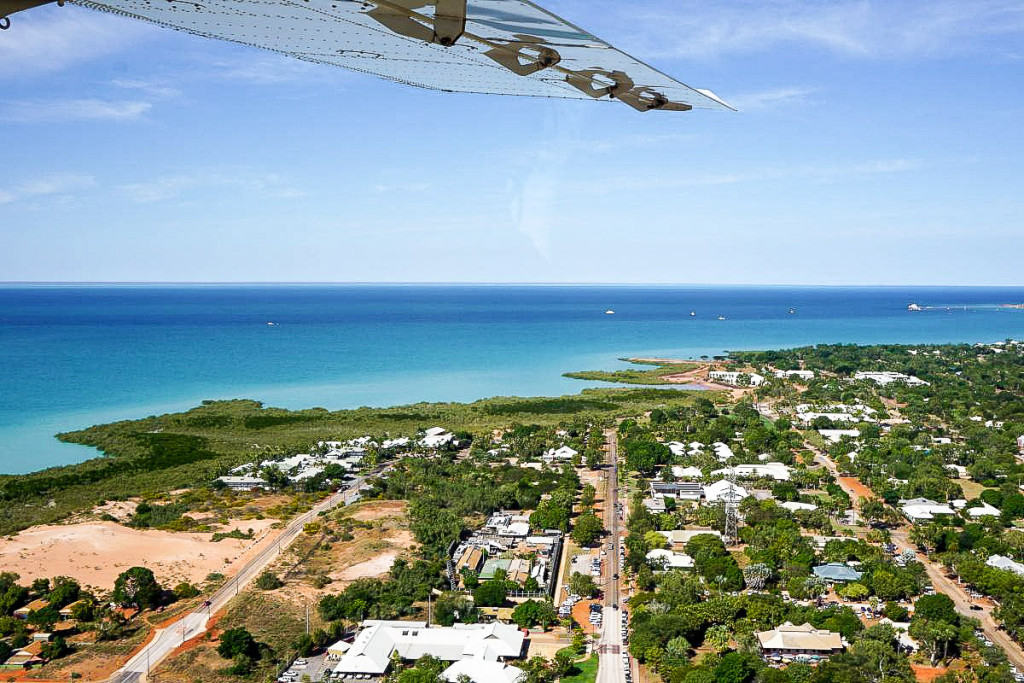 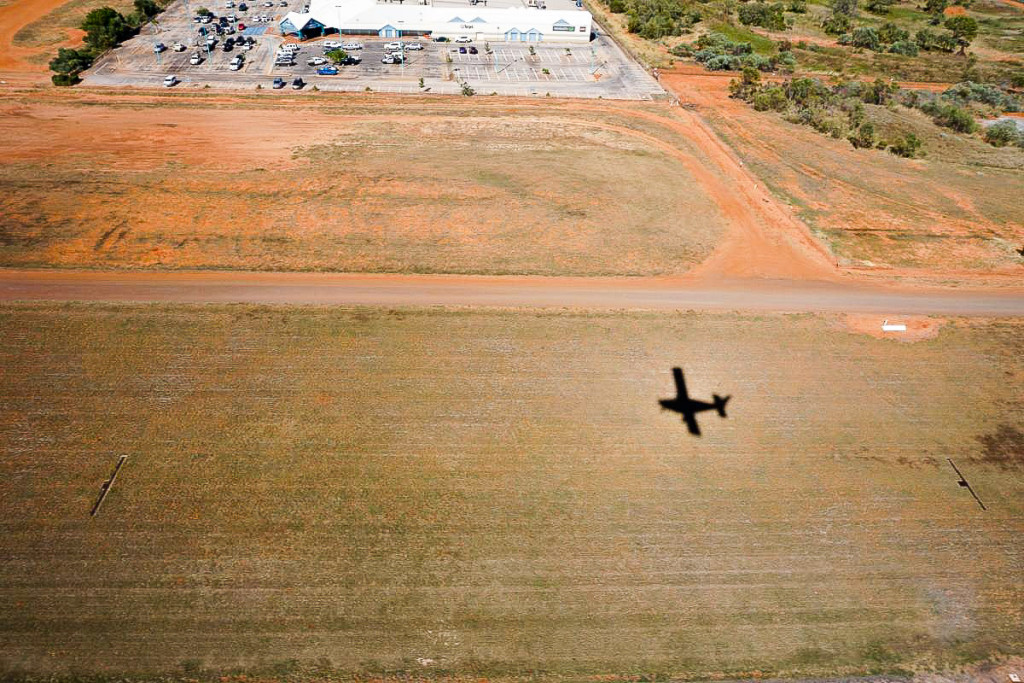 Apparently, there are just two asphalt runways in the whole of Kimberley – one in the above-mentioned Broome, and the other in Kununurra (No, that won’t do. Now actually click on Kununurra and read carefully. Oh, my… That is the most middle-of-nowhere place ever!) 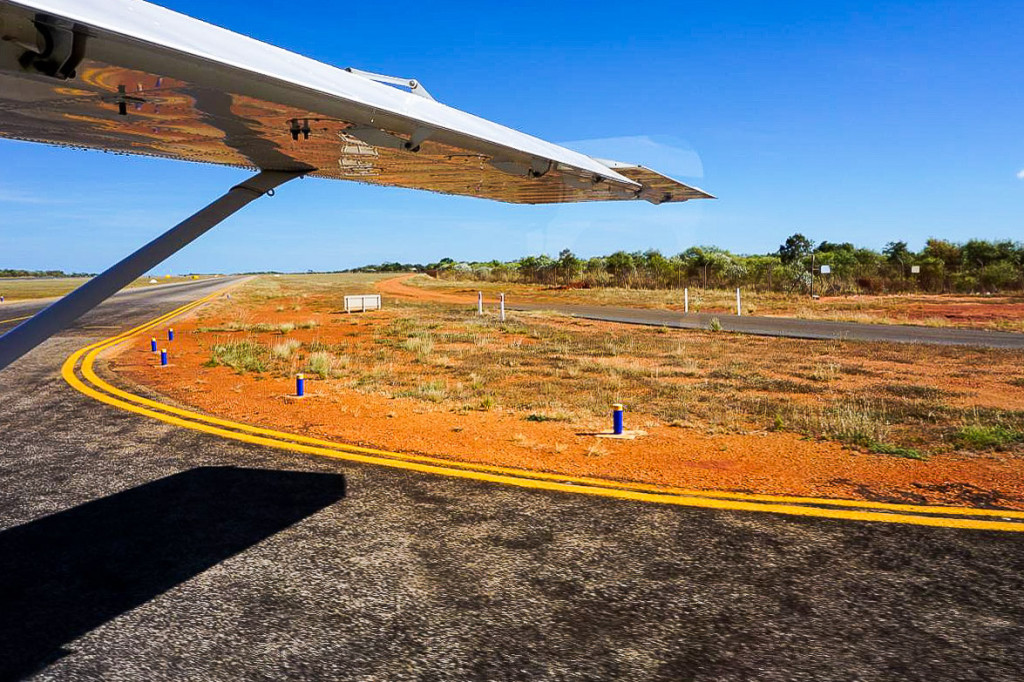 All the rest are unmetalled runways. The soil is red, so the ‘runways’ look like this: 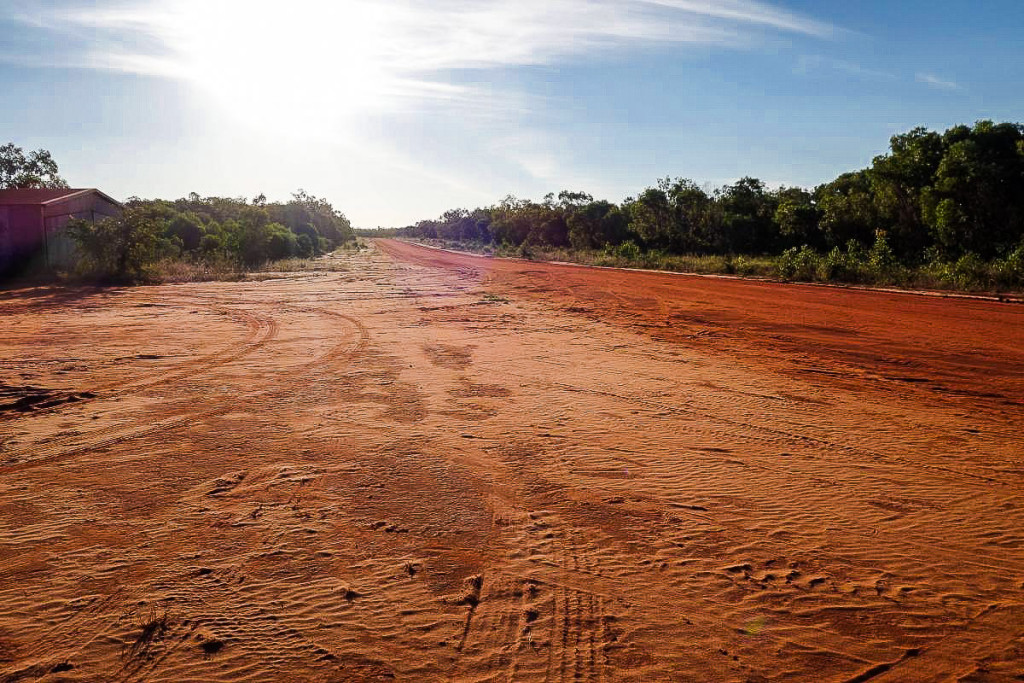 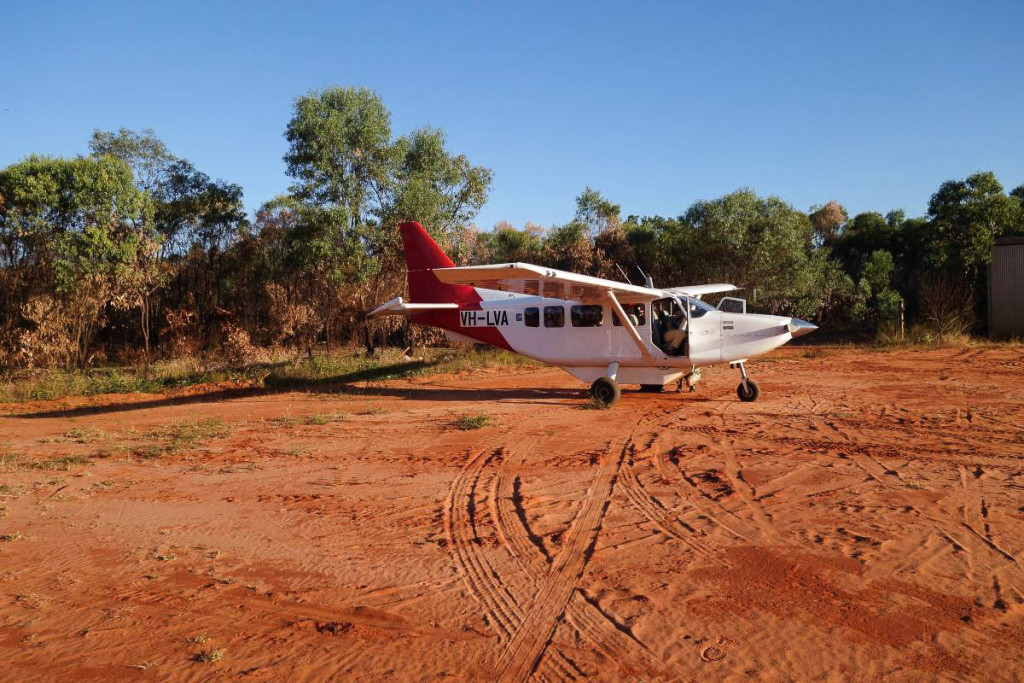 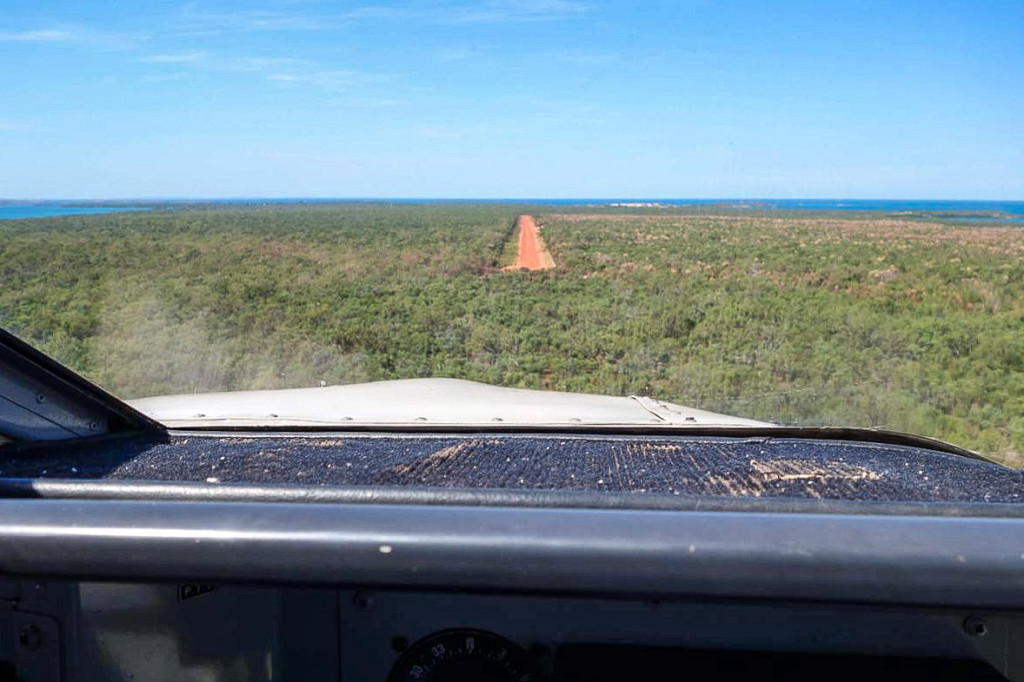 There are some real special – versatile! – planes around here.

I mean, these can fly, drive along the ground, and also swim! That’s more or less like… a duck! A duck can do all of these, but only slowly. Only triathlon champions, which are few in number, could do all three activities at once, at the same time, and in world-class times. OK, yes, I have gotten myself a tad distracted. Alrighty, here’s a photo of a mechanical duck: 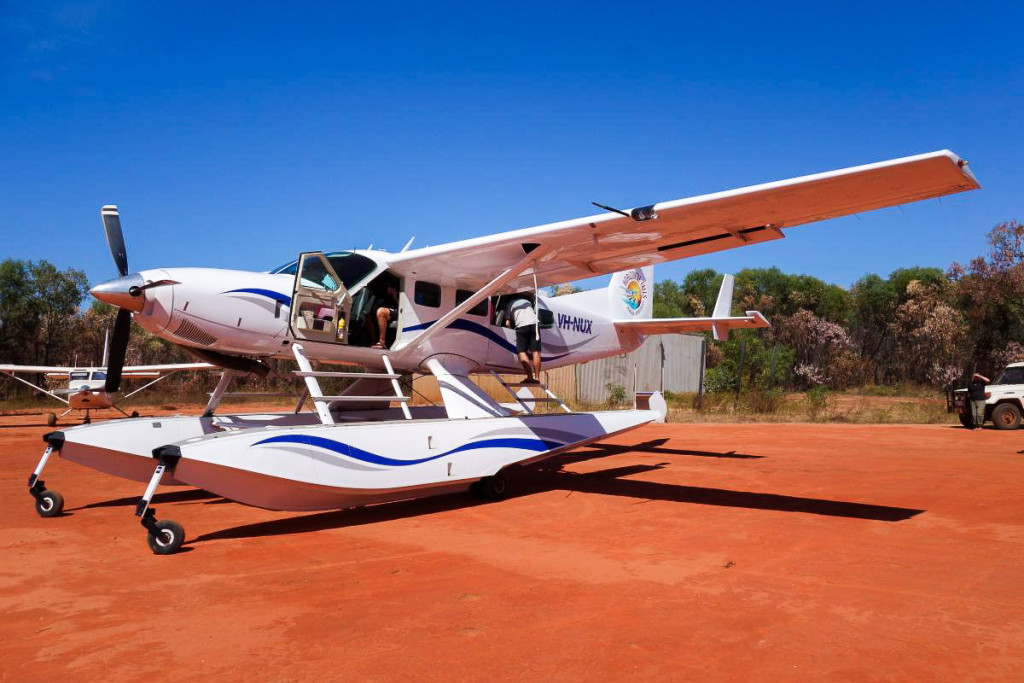 There are roads here too! But just one is asphalted – here in Kimberley.

Wanna see what the roads in Kimberley look like? Really? OK, here you go!

The yellow strip on the map at the end of that link is the asphalt road. Everything else is savanna. Nothing but savanna. However, I’ll sing my savanna song in a later post…

The best way to see the best of the region’s natural beauty is along the coast line. And for that, just like in Captain Cook’s times, it’s best to go by boat. Boats can be hired for a good spot of sightseeing. Well, OK, hiring a helicopter works well too – then you can get the views from alongside and up above. And if Captain Cook had had the chance, he might have wanted a quadrocopter too to take some nice selfies :).

One last thing to mention: the sunsets here – among the world’s best! 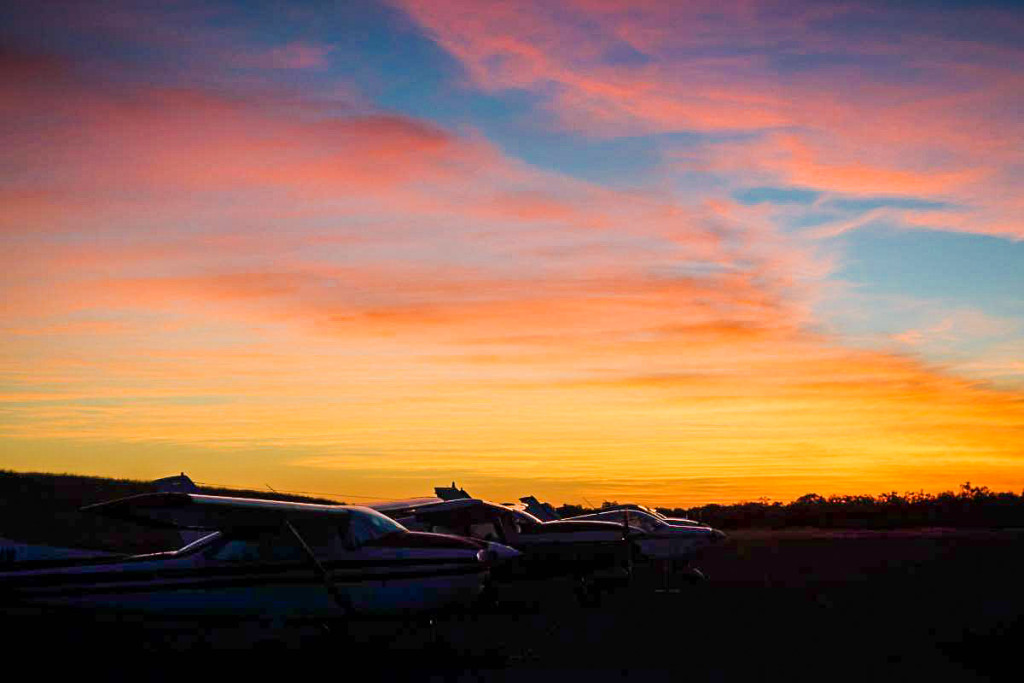 OK, that’ll do for this post. There’s still plenty more to come from down-under, so get in the popcorn and the Castlemaine XXXX, and I’ll be back with you in two shakes of a kangaroo’s tail…