Startups – affairs that are risky and slow to build up momentum. They call for big cash, a knack for seeing into the future, and a nose for where the big returns on investment are. They take years to really get going; only one in twenty (or even more) doesn’t die a premature death.

Traditionally, venture capitalists have funded startups, but there’s a new type of venture capitalist on the block. They ask: ‘Why get all tense and take risks with startups, when it’s possible to invest in… patent trolls?! Easy! One such new kid on the block is the funder Bentham IMF (I don’t give the site address on purpose; hardly want to help this company out with their SEO efforts. You can find it if you really want to).

The math is reeaal simple: the funder gives out, say, one to ten million dollars for low risk patent cases against wealthy victim-companies, which can bring in no less than ten to a hundred million dollars payout, respectively (that is, they aim for around a ten-fold return on investment). Now, the fact that patent trolls in the US – even if they lose – don’t pay a penny to defendants, and the average % of awarded ‘damages’ or out-of-court-settlement payments can be up to 99%… well, it all adds up to a practically guaranteed-returns venture scheme!

Who the heck needs innovation? Much better: ‘invest’ money in small patent trolls so they can shake down litigate against the innovators. Wonderful. The American Dream turned inside-out and upside-down. The new American Patent Dream in full effect! 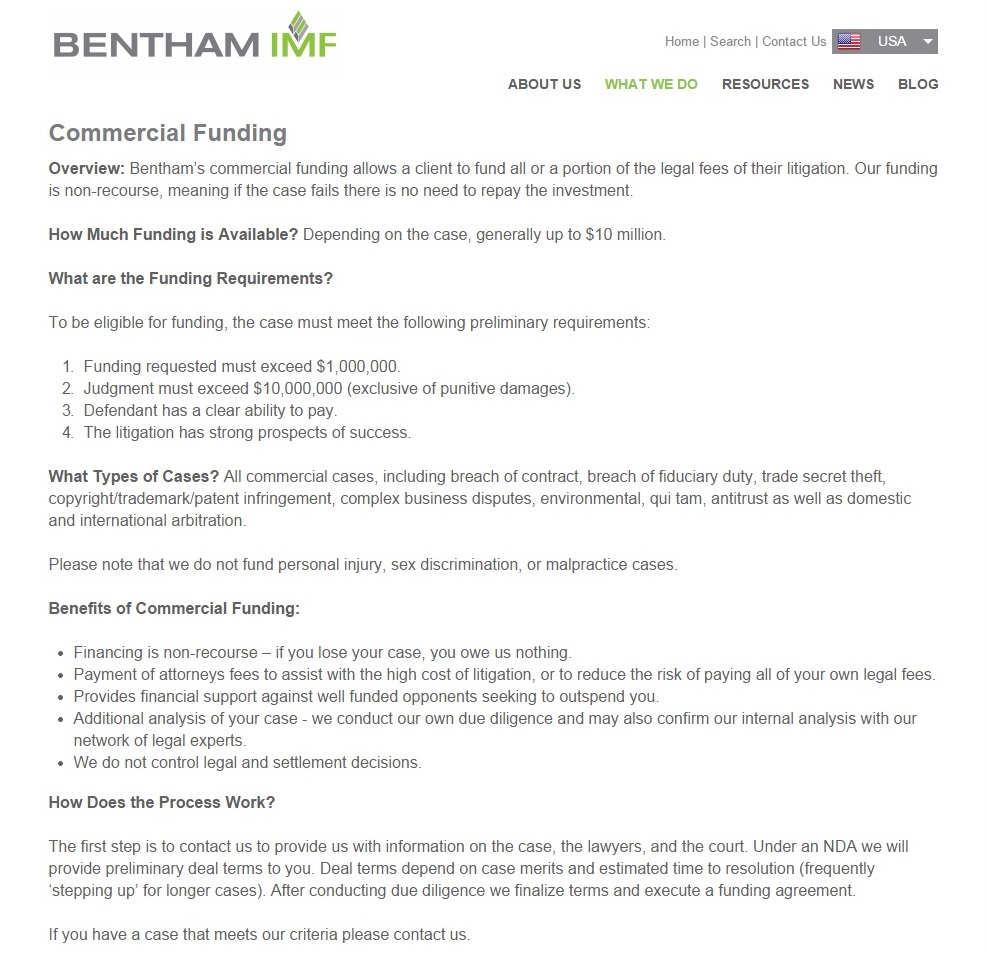 Of course, there’s an official basis to this legitimatized extortion – the support of law, universal justice and punishment of rotten violators. But no matter how much it’s talked up, there’s still no getting away from the simple fact: a troll is a troll.

We’ve been pushing for years already to force plaintiffs who drop their lawsuits without reason or ‘in view of certain circumstances’ to pay the defendant for its court costs, and also to have the losing side in a patent court case pay the costs of the other side.

Dear American lawmakers and judges! Look what’s happening – venture capital is already going after easy patent troll money! When patent aggregators appeared, allegedly offering ‘protection’ from trolls, I thought that that had to be the upper limit of how stratospherically absurd and wrong and bad things could get in the world of patent extortion. I was mistaken. Fantasies of the misuse of law seem to know no limit.

So, again to the dear US lawmakers: Aren’t you bothered about what might become of genuine innovational/tech companies? After all, every dollar spent on protection from pseudo-patents is one less dollar spent on the development of industry and society as a whole! But we’re not talking a dollar or two here. It’s tens of millions of dollars a year.

So what about the trolls?

US trolls act with impunity, become more and more brazen, and are fully content with life. The state should provide protection for genuine inventors and create an effective system of regulation of patent litigation. But that ain’t there. There are obvious working models that could be applied, but still – they aren’t. There have been positive shifts, even in the US, but still, not much has actually changed.

Actually, not a lot needs doing to get things working as they should. We’ve been repeating five simple steps to be made in patent law that would swiftly solve the problem with trolls – by destroying the foundations of their economic raison d’etre:

Just look at Europe – though not all five points have been established, just two of them – the fourth and fifth – have practically turned the problem of patent trolls into… no problem at all. Incidentally, recently an aggregator sued Yahoo! in Germany. I’m almost certain that nothing will come of it. Well, if, of course, Yahoo! itself doesn’t go for an out-of-court settlement.

To conclude, here’s a humorous clip that explains in simple language the what, how and why of the business of patent trolls. V. funny too. Enjoy!…: