“Patents against innovation”. Sounds as paradoxical as “bees against honey”, “hamburger patties against buns”, “students against sex” or “rock ‘n’ roll against drugs”.

Patents against innovation? How can that be possible? Patents exist to protect inventors’ rights, to provide a return on R&D investment, and generally to stimulate technological progress. Well, maybe it’s like that for some things, but in today’s software world – no way.

Today’s patent law regarding software is…well, it’s a bit like one of those circus mirrors where reality is distorted. Patent law is now just so far removed from common sense that it’s patently absurd; the whole system right down to its roots needs to be overhauled. ASAP! Otherwise innovative patents meant to encourage and protect will simply fail to materialize. (Good job, patent system. Stellar work.)

So how did everything end up so messed up?

Well, despite the virtuous original intention of patents to protect inventors – today they’ve mainly turned into nothing more than an extortion tool, whose objective is just the opposite of protecting innovation. The contemporary patent business is a technological racket – a cross-breed between… a thieving magpie and a kleptomaniac monkey – with a malicious instinct to drag anything of value back to its lair. 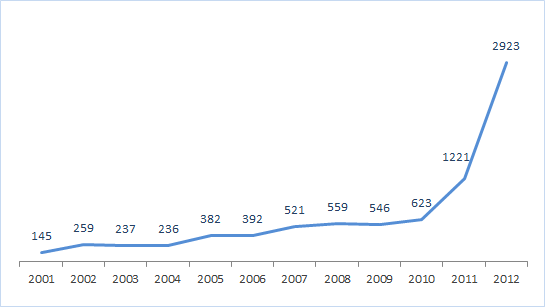 Now for some detail. Let’s have a closer look at the patent business.

The main players in the business that is causing just about all the trouble are patent aggregators, AKA patent trolls, which buy up rights to inventions and then use those rights to blackmail … er … become a costly thorn in the side of innovative companies that somehow violate the patents. Of course what might seem not so extraordinary is that innovators hit upon ideas that happen to already be patented… The result is simple. To market that invention, they will have to pay a fee. But in fact it’s not quite so straightforward. And this is only the tip of the iceberg.

First, patent authorities in many countries (most of all – in the USA) have traditionally allowed ideas to be patented in the very broadest of terms. Example: a “method for transferring an electrical signal”: in 10 years’ time this could impinge on just about everything under the sun. You may recall the recent case  in which someone claimed to have invented the “interactive web” (basically – the Internet) – which, it was claimed, was protected by a patent issued in… 1993 (sic!).

Second, ideas themselves are patented, not their actual implementation (creation), which motivates many disingenuous inventors to become either bungling fantasists with out of control imaginations, or just plain old underhand crafty exploiters of the system. The vast majority of aggregates’ patents never were and never will be put into practice, i.e., never were/will be actually used for anything actually made. However, if someone actually does come up with a great idea that’s similar,  the patent trolls spring into action.

Third, descriptions of even the most genuine and concrete of inventions (ideas) are often so fuzzy and vague that with very little effort they can be made to apply to just about anything at all.

Conclusion: the modern patent system is vulnerable to all sorts of misuse and abuses. But one can easily understand the difference between a true inventor and a patent troll by the way they treat this vulnerability. The difference between the two happens to be very very slight, but all the same – it’s easily discernible.

Sly miscreants are quick in exploiting the patent system’s vulnerability, and in the process has turned the once-respectable patent institution into a stick-up outfit. Every year genuinely innovative companies fork out tens of billions of dollars to them. Diverting huge sums away from investment in the real innovations that patents are supposed to protect!

What’s worse, the depraved and utterly dodgy scam that the patent business has become is growing and growing and getting stronger and stronger. Of course it is: expenditure is minimal, nothing actually needs to be made, and violence is side-stepped in favor of conference-room negotiations. So, get yourself a patent pool, and run it like a kind of bandit taking your cut every week. Easy as pie!

Then there’s the patent law circus with its geographical and industry specifics:

The antipode of the American system is the European one.

In Europe it’s not so easy to patent something with fuzzy formulas, patent applications need to pass some serious expert testing, while all-out trollism is nipped in the bud by procedural methods. In some places the invention registration system is still practiced – where you can just go and patent something with a minor check or none at all. Here the exploiters of the system apply the fear factor, to great effect. They sue a company with the hope for a quick buck (or million) from a pretrial settlement. However, when the defendant stays cool and goes to court, such trolls quickly stand down from their nonsense. A few years ago some application-ers tried this trick on us in Italy with our mobile tech. As soon as we took the matter to court, they backed down, naturally.

Software patents have their own specifics.

Here things are still more messed up and muddled, since it’s one thing to patent, for example, engineering inventions (there’s a little chance of getting round physical nuts and bolts), but another thing entirely to patent software technology. Here it’s a colossal conundrum of words and reason – or lack thereof – across the board, and it’s been like this for years. Oh, how much brains, time, and funds earmarked for innovation gets spent on it all!

What a waste! And the system’s alive and kicking.

Thus, it would seem we’re witnessing a struggle between brave IT guys and girls against rotten patent trolls. Balderdash! Software vendors themselves often play their part on the other side of the barricades too, sometimes forced to by circumstances.

A recent example: Ericsson sold two thousand patents  to the aggregator Unwired Planet. That’s understandable,  the Swedes have had more than their fair share of financial troubles, so they needed to pull out all the stops to get their liabilities down to a minimum and assets up to a maximum. At the same time, they couldn’t be seen getting themselves into a mafia racket-like dubious business. So they sold the patents, and now Ericsson will receive from its troll partner-in-crime its share of the profits from the patents it sells or collects royalties from them itself.

Others pander to trolls, agreeing for pretrial settlements and licensing from the troll’s patent pool. From the point of view of the whiz-kid manager with an MBA it’s a fully justified and quick solution; however, strategically – it’s a disgraceful fail. Give them an inch and they take a mile: once a troll gets easy money from you – it’ll be back for more soon.

For years various countries have tried solving the problem of patent trolling of software.

There are regular attempts at legislatively forbidding the patenting of software algorithms. Alas, I can’t report any successful attempts. New Zealand has been going round and round for three years already, but to no avail (though the end is at least in sight now). Not long ago a working group on innovation of the U.S.-Russia Bilateral Presidential Commission sat down in Russia to hammer things out once and for all. And guess what? The correct suggestion to exclude software algorithms from the list of patentable objects was struck off the agenda – based on a move made by… Microsoft! What for? Hmmm, not because its former CTO now heads the largest patent troll in the world, maybe? But that’s another post for another day…

Aaannnyyyway, you get the message: trolls are running riot and continue to get away with it, while patent law takes eons to sort itself out.

Soooo. What’s to be done? Here’s my list of first-of-all must-dos:

Thankfully, there does at least seem to be some kind of understanding at the very highest levels about the ongoing patent troll scandal, but still the road ahead towards the proverbial light at the end of the tunnel is bendy, bumpy and overall very hard-going.

The tunnel’s end – when? Who knows? Sooner rather than later, please.