There are a great many beautiful and unusual towns and cities in the world, there are volcanoes, there are valleys and canyons, and islands and lakes. There are also of course rivers: loads of them – all different. There are the grandiose, like the super-wide Amazon with its adjacent jungles, anacondas, piranhas, crocodiles and other underwater perils. There’s the Nile (haven’t seen it myself) – running through the desert, also with crocs, and with 1001 ancient human stories to tell. There’s the Mississippi and all that Tom Sawyer-ness. There’s the Danube and Rhine (and the Lorelei and attendant songs about soldiers fallen in battle). There’s the Yellow River with its unfathomable intensity (also haven’t seen yet), there’s the Lena with its endlessness and Pillars running alongside. Yes, the list is long. // Can you help me continue the list?…

There’s another river – a rather unique one – in southwestern USA (and northwestern Mexico). It’s called the Colorado River. It’s so impressive they went and named a state after it. Its uniqueness flows from how it has cut through the rocky landscapes of several US states – Colorado, Utah, Nevada and California. Check it.

Much of what I snapped for my recent posts from Utah was made, literally, by the Colorado River. This river also happens to supply the water for a whole five states, and one particularly parched city of note (built bang in the middle of a desert): Las Vegas. I sometimes wonder how on earth this river hasn’t dried up completely yet.

It was the Colorado that over thousands (millions?) of years dried up the internal sea-lake of the West of Northern America. It was the Colorado that etched the most incredibly beautiful wrinkles – canyons – into the face of this particularly rocky part of the North American continent. Some sections of rock however wouldn’t be worn down, no matter how hard the river tried, and these still stand today, towering up above the canyons. The landscapes here are just astonishing. They’re difficult to describe. You need to experience it first hand to believe it really. Which I recommend you all do one day! 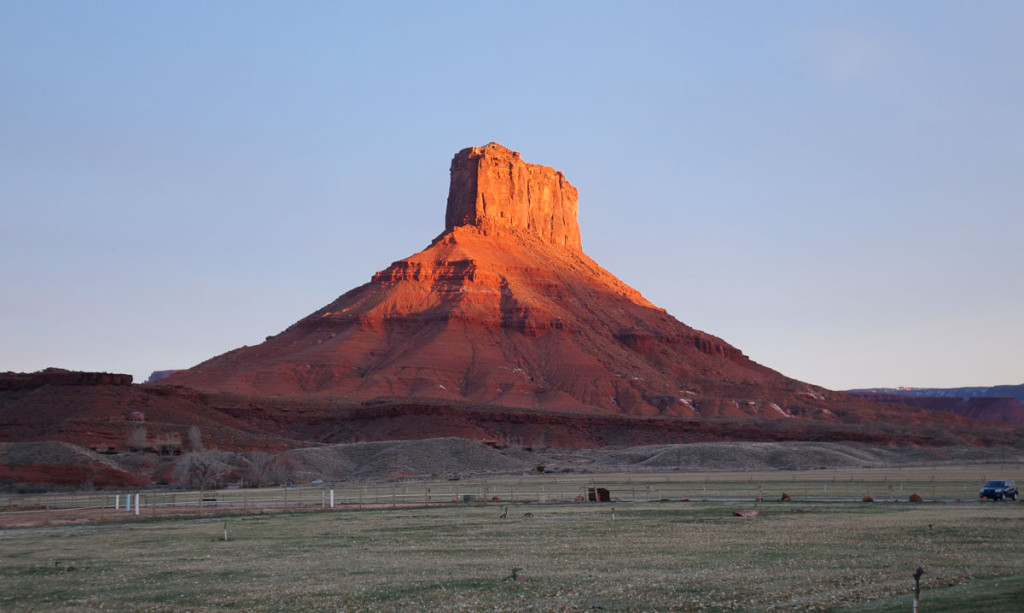 Anyway. As you’ll have gathered already, we were in the vicinity of the Colorado for several days recently. I’ve told you most of what there is to tell already. Bar one thing: where we stayed.

I was fairly amazed how the town of Moab, the touristy center to stay at if in the area, is tiny – especially given the monstrously massiveness of the surrounding naturalness. In all just 5000 live here – a mere village. We passed on Moab’s handful of good hotels. We eventually opted for one some 30 kilometers from the town: the Sorrel River Ranch. 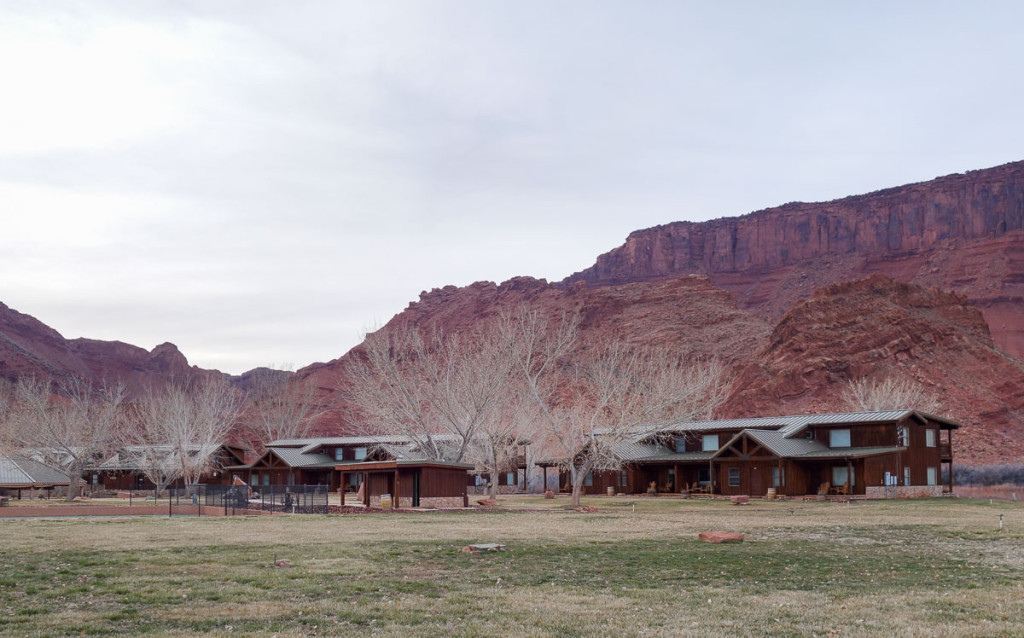 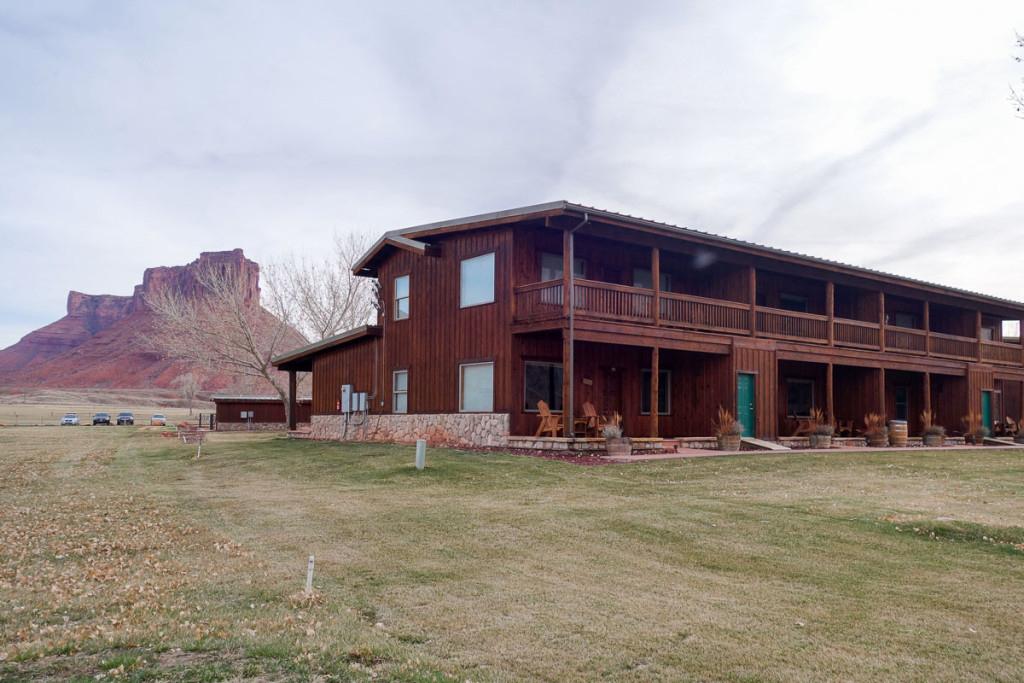 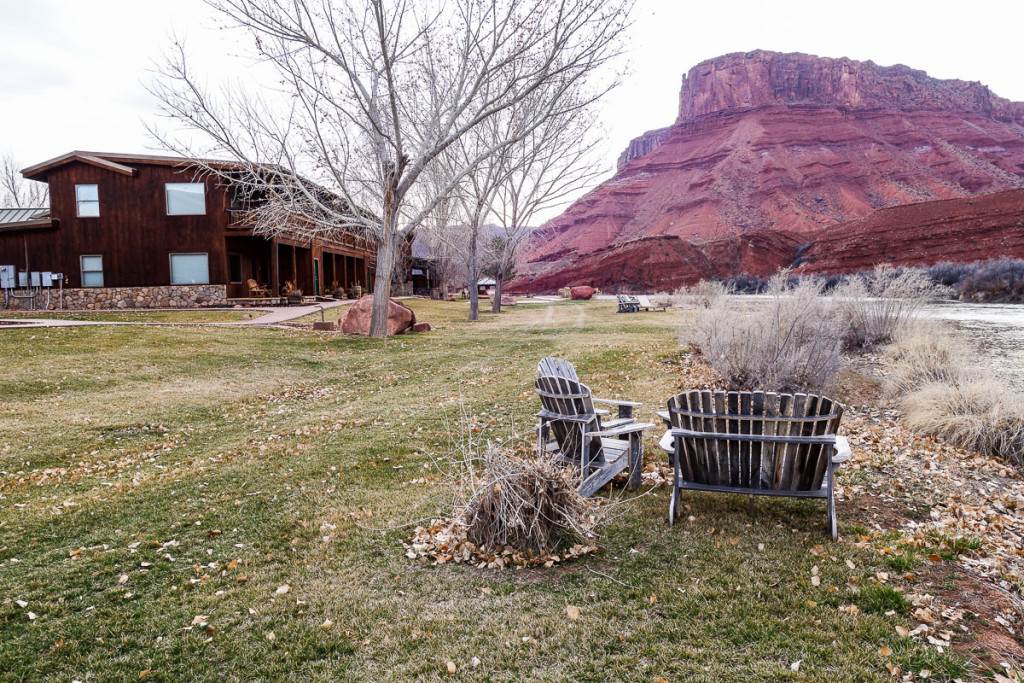 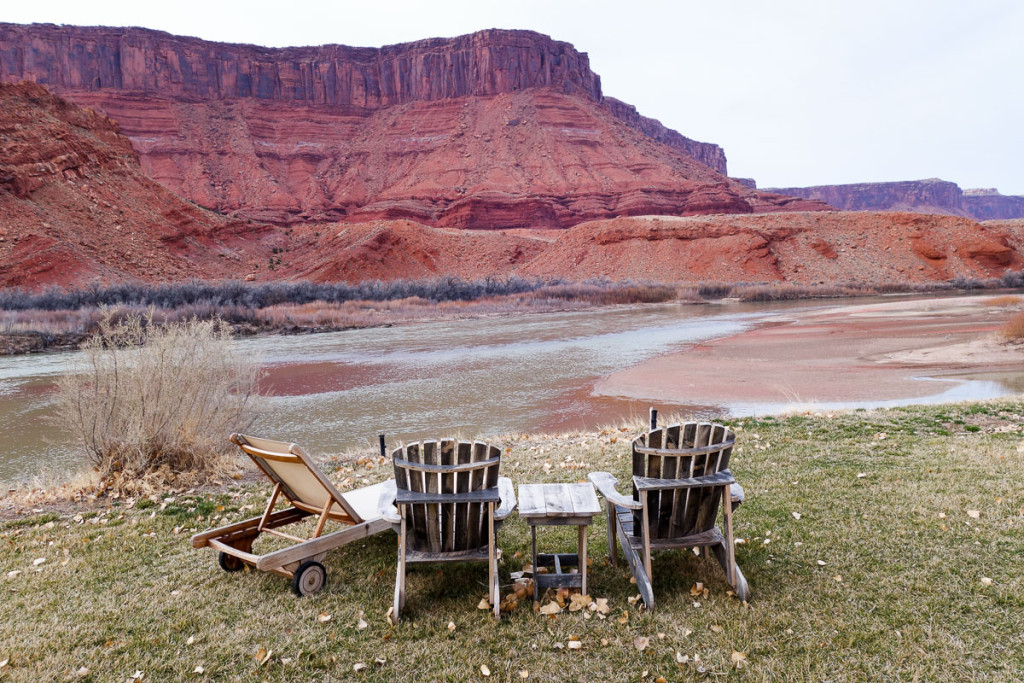 Sure was worth the ride out of town. Just look at the views!

There’s no spa, no massages, no piano player in the lobby bar… it’s just a few well-built buildings all on their lonesome in the valley of the Colorado River. All around nothing but idyllic countryside: horses grazing, manure smelling, the river itself right here. And free Wi-Fi, which added to the positive vibes.

The main things here though – the sunrise and the sunset: the perfect backdrop to the already awesome natural rock-scapes. Nighttime too here is out of this world: stars + canyons = a synergy of beauty! 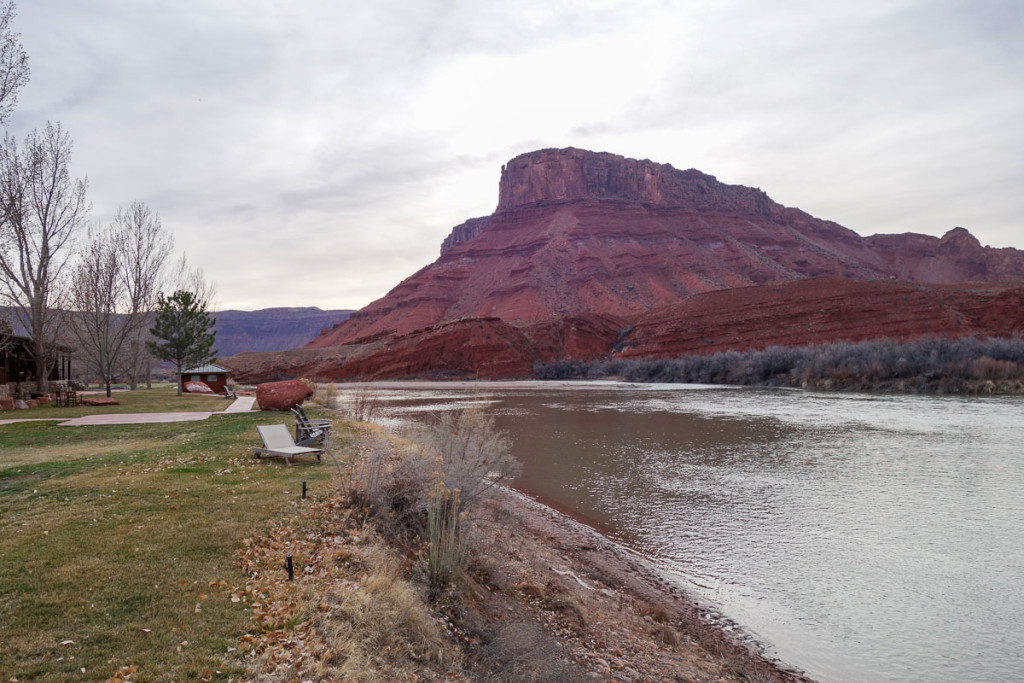 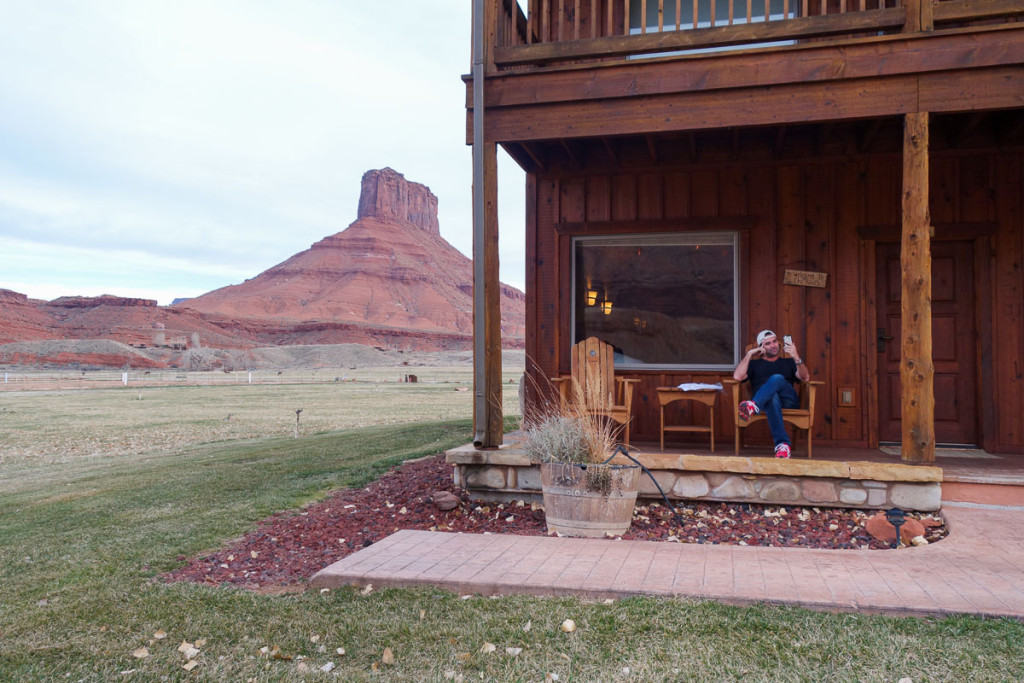 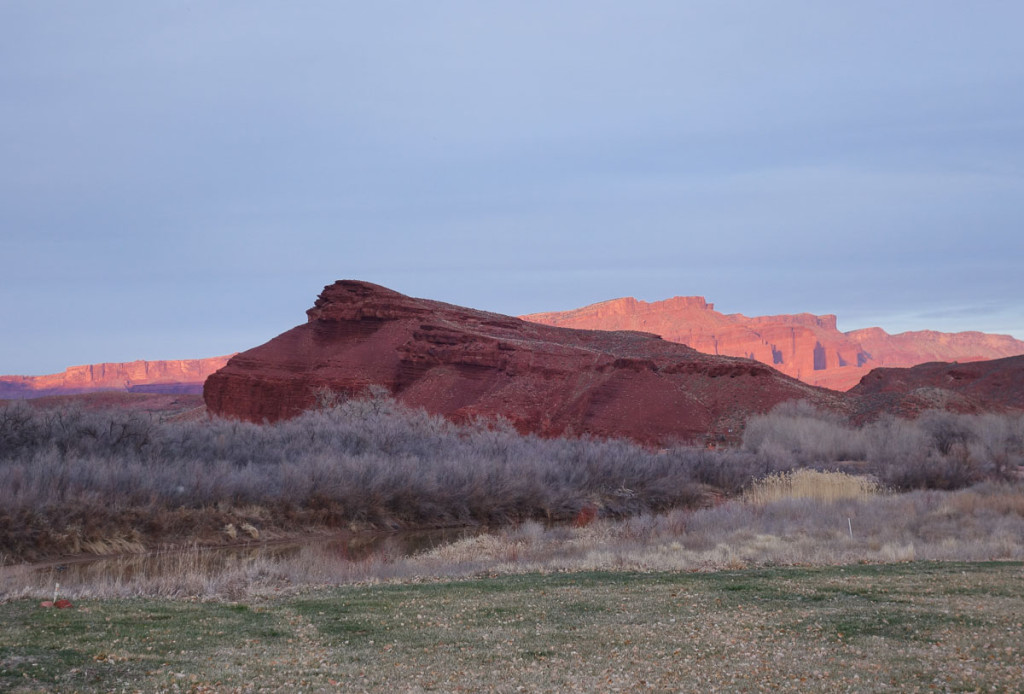 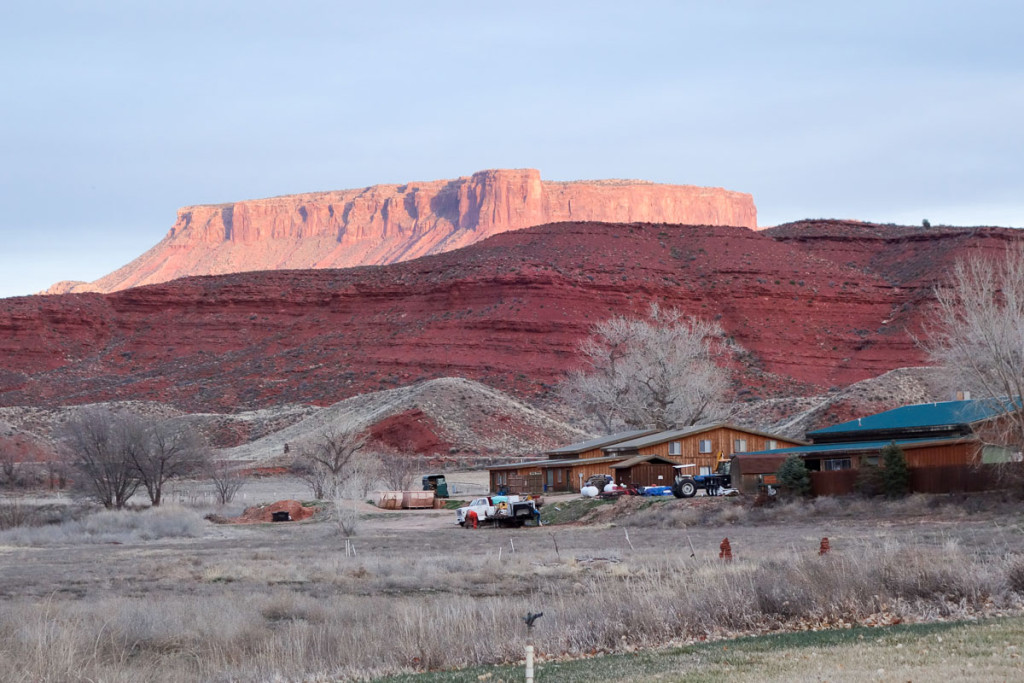 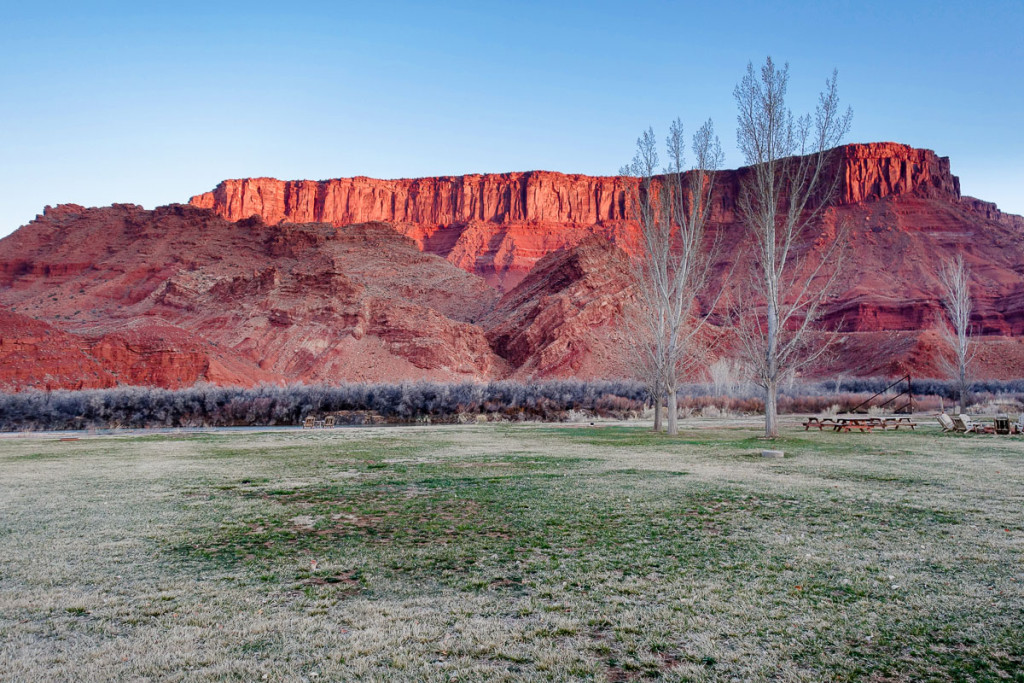 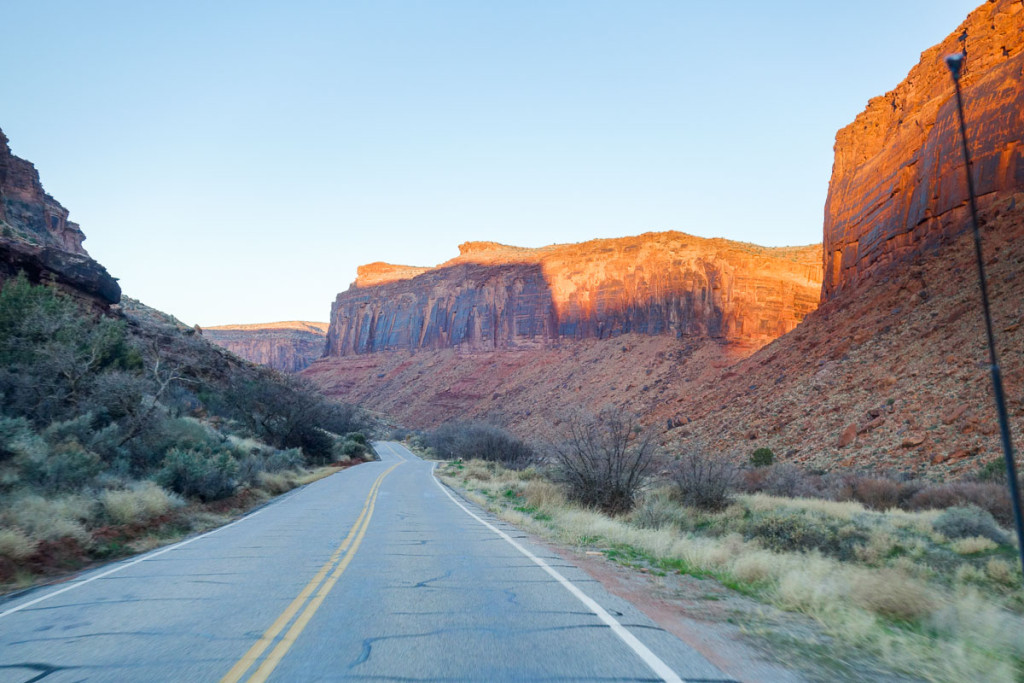 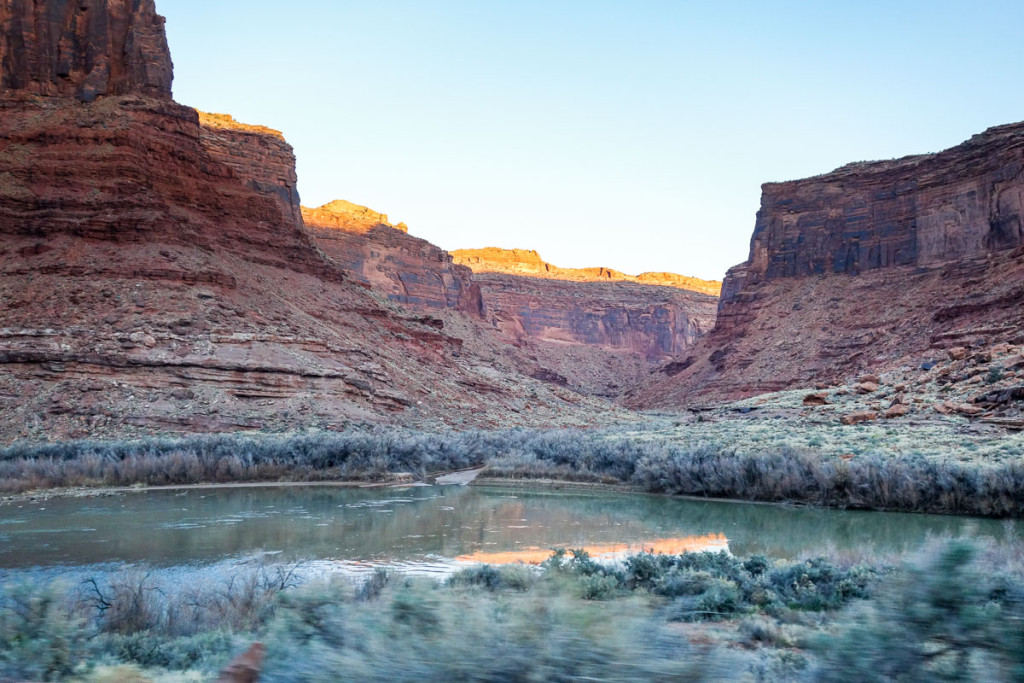 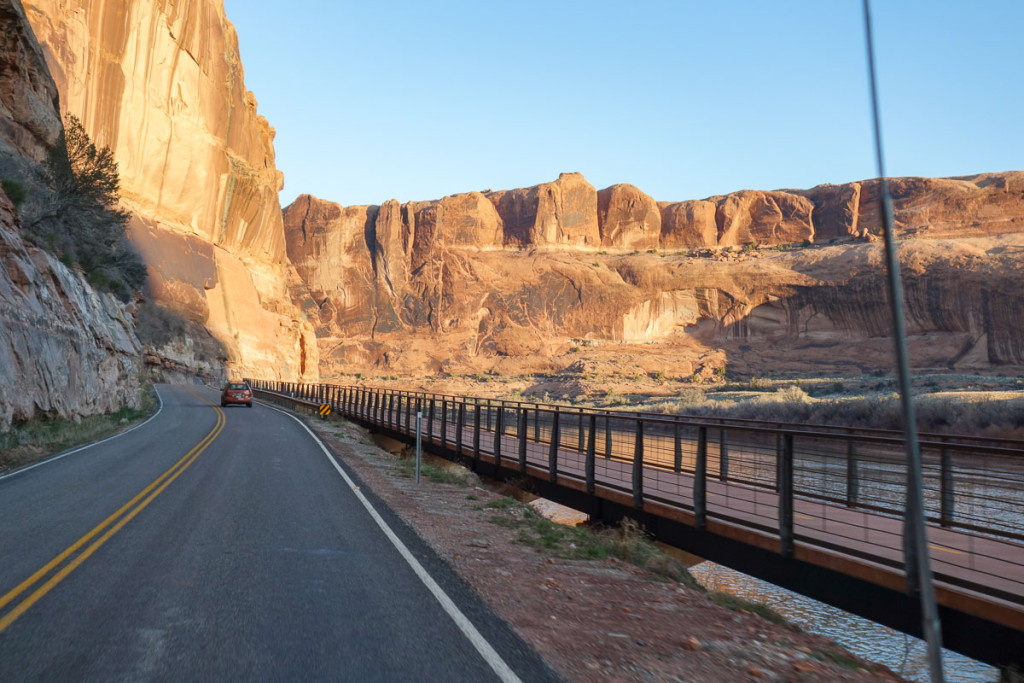 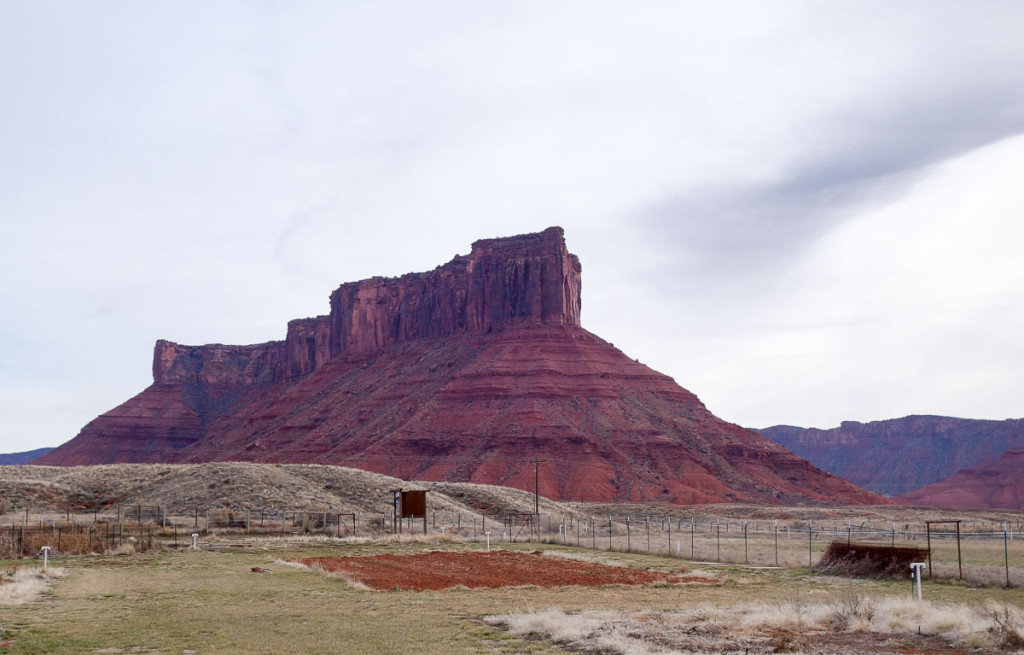 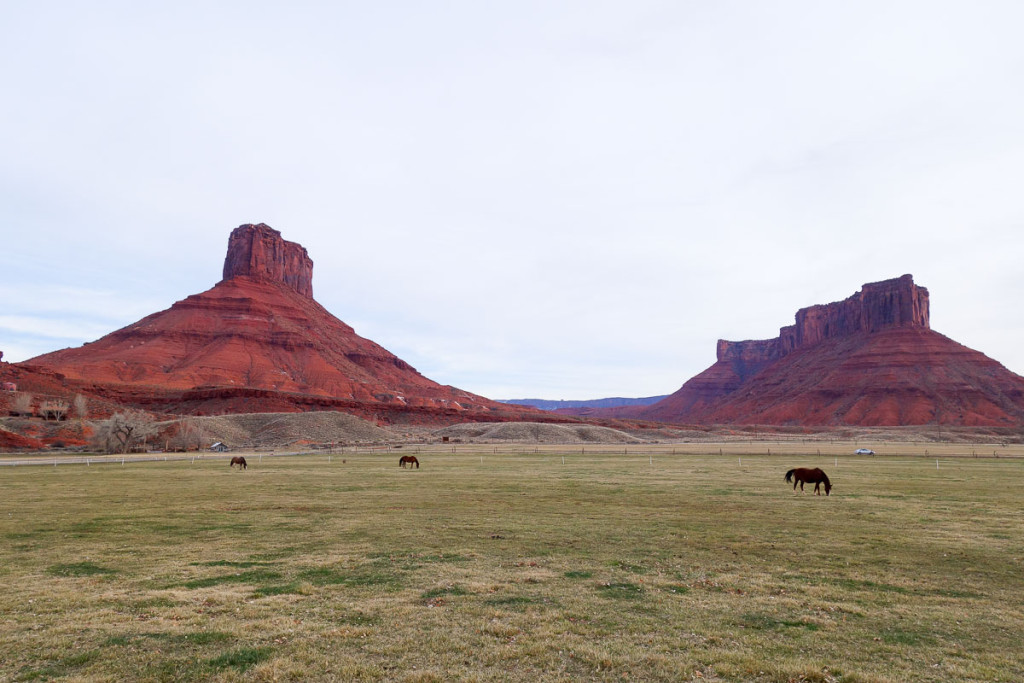 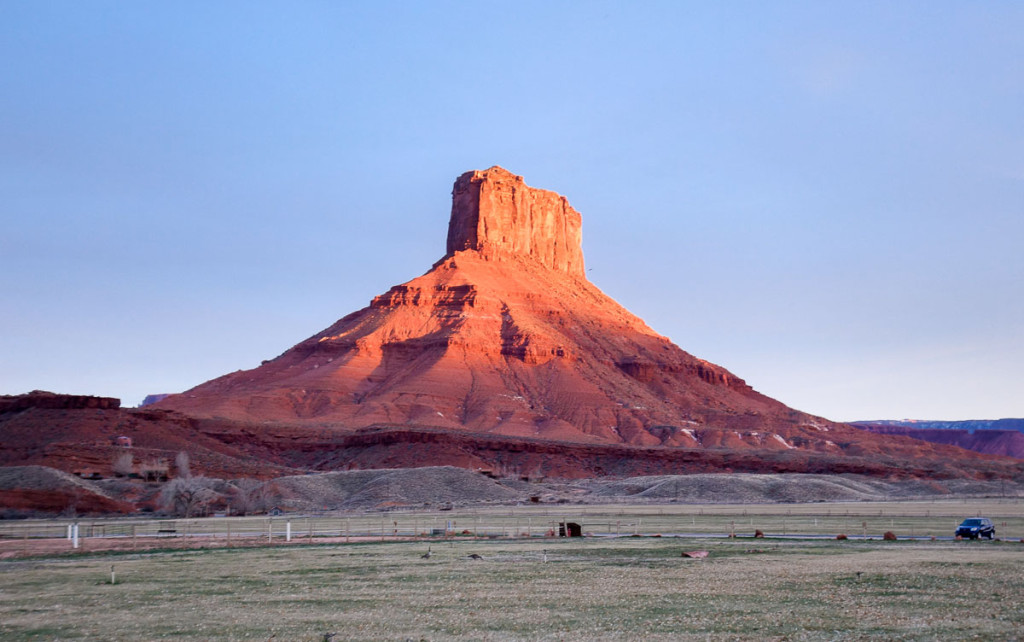 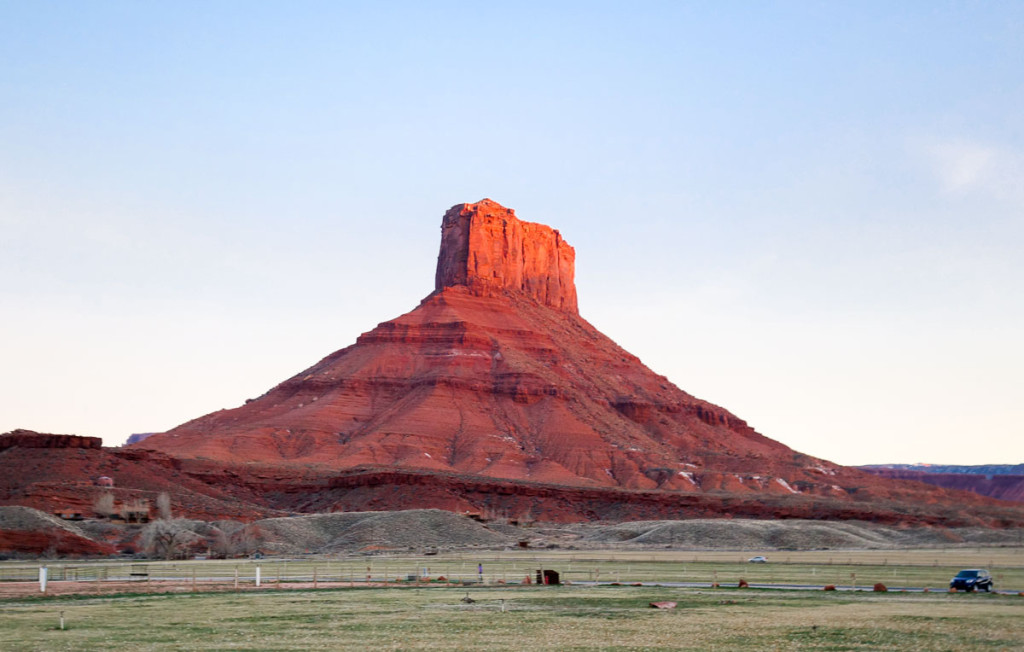 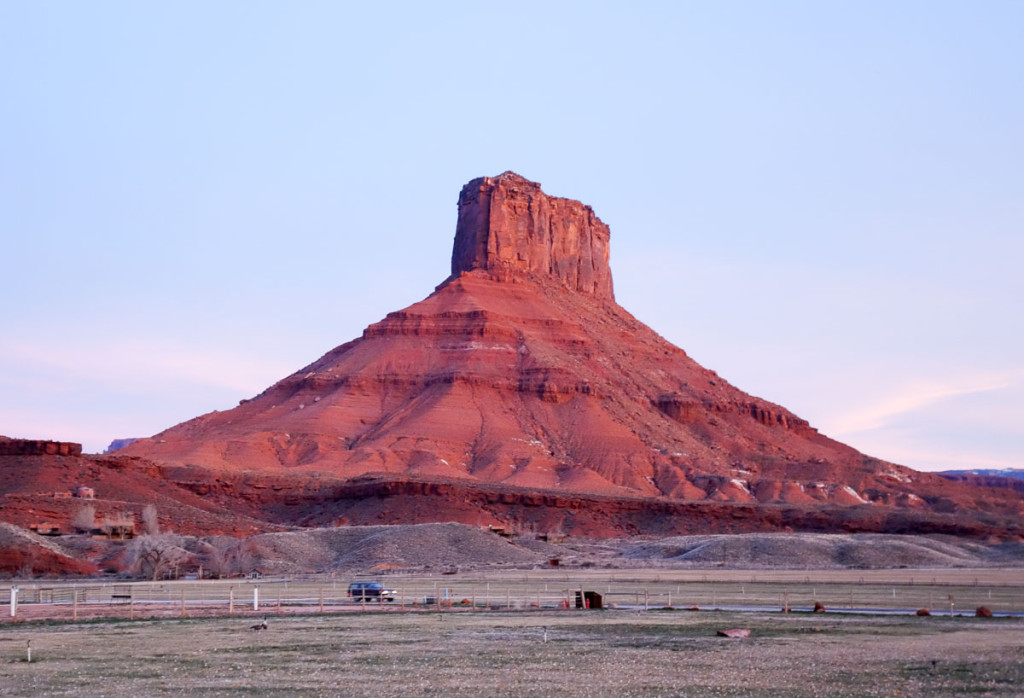 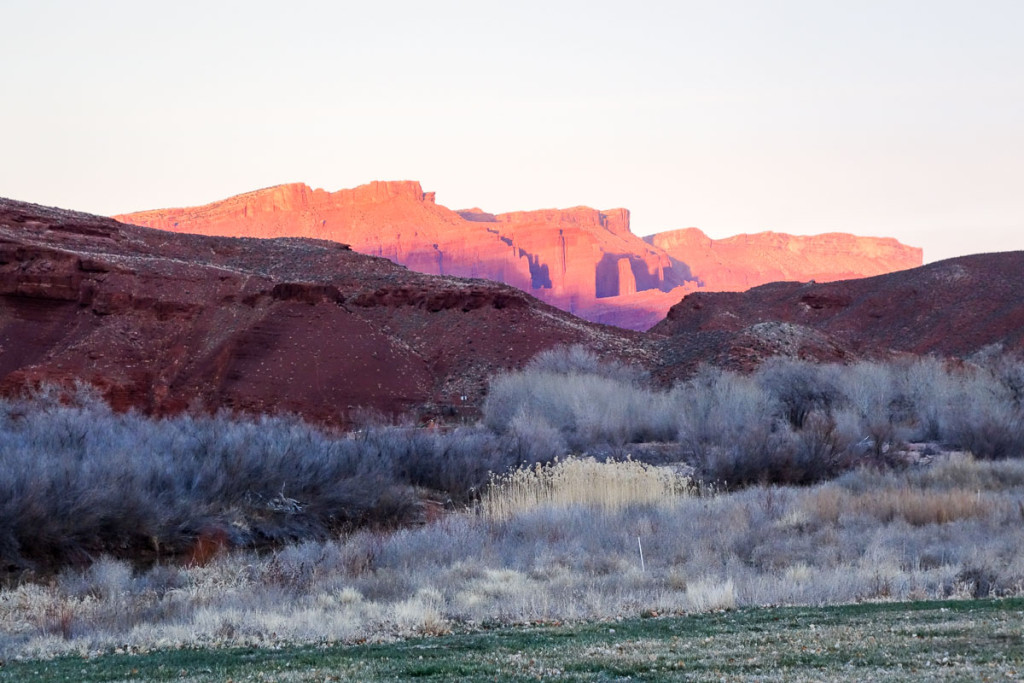 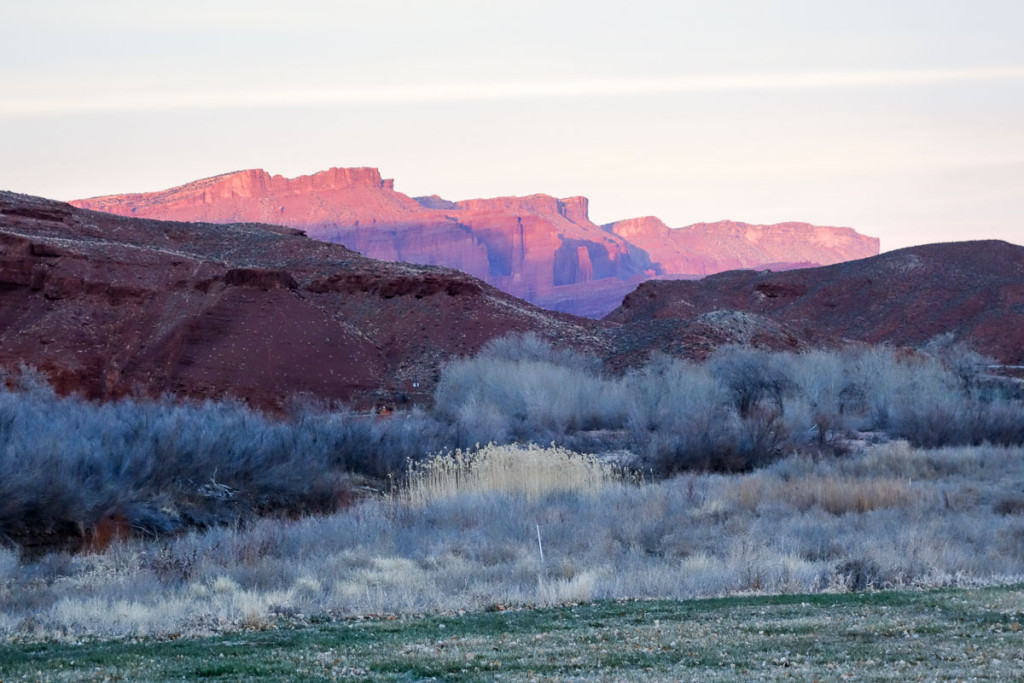 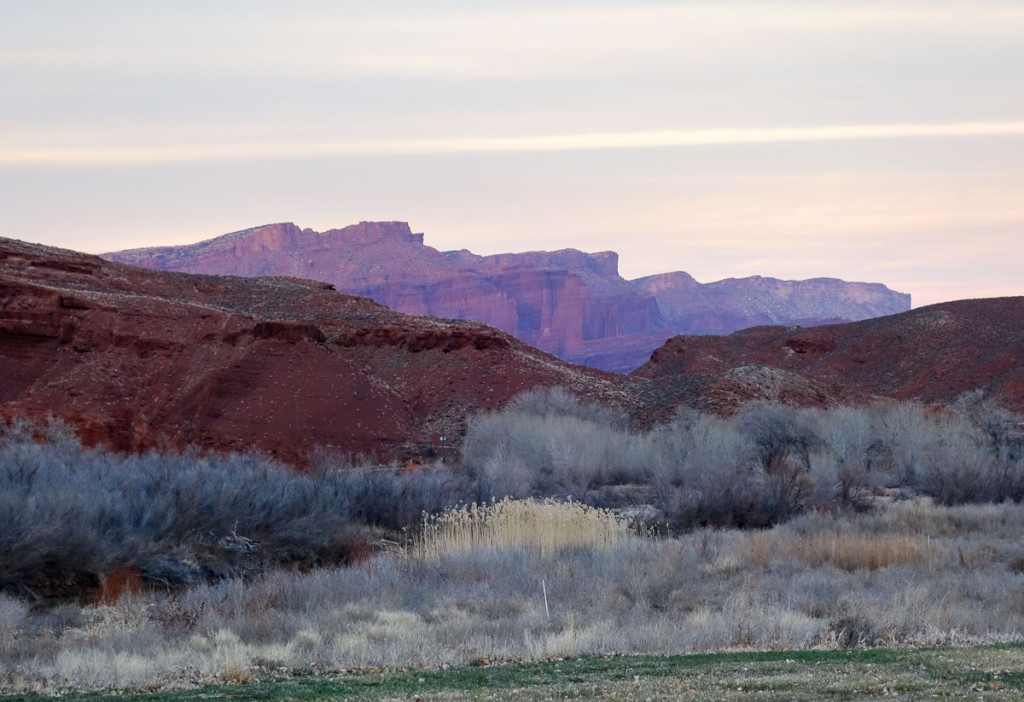 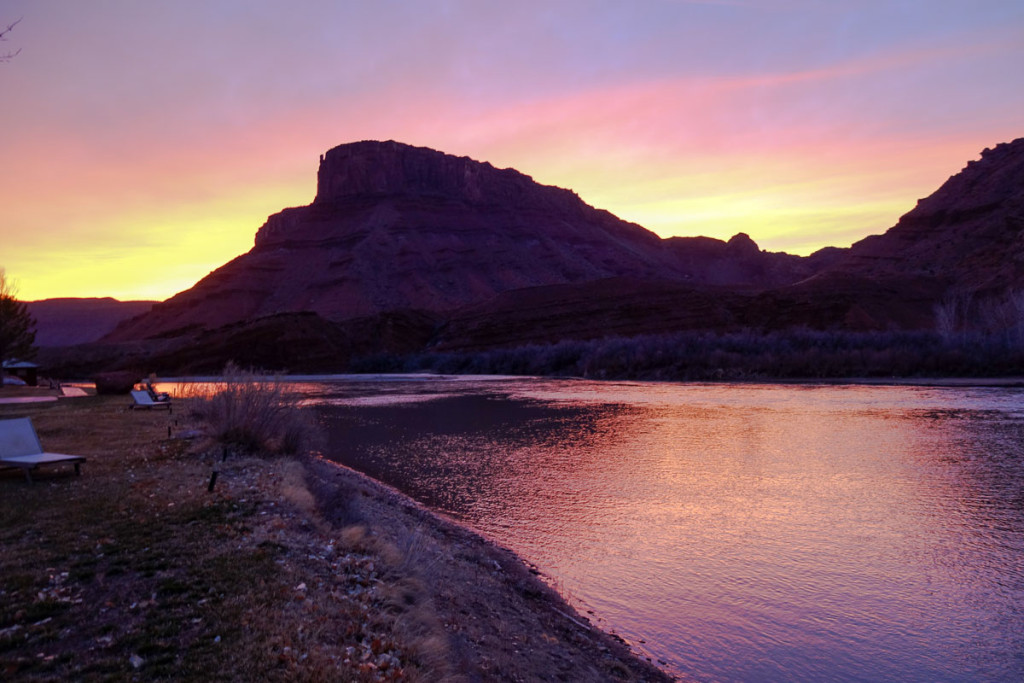 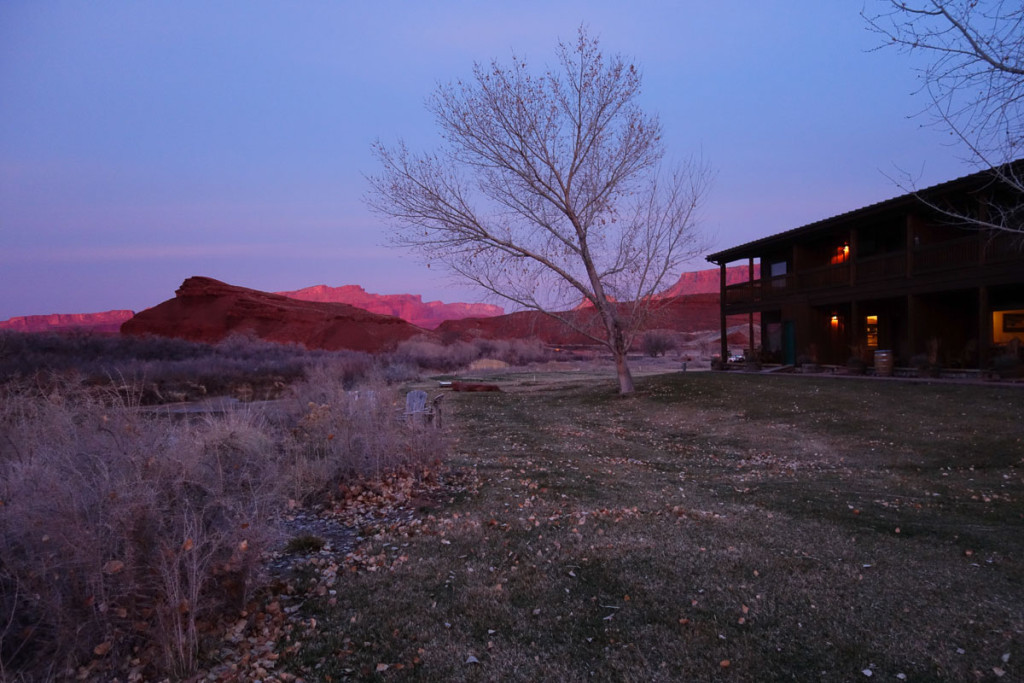 The pros regarding the hotel I’ve listed. Now for the cons…

Con No. 1: The food situation. There is food, but it’s awful. No thought or care put into its preparation at all.

Con No. 2: The extra 30km getting there… Still, this ain’t no miserable gray highway. The road goes through the red canyon right along the Colorado River. So, actually – not a con. Especially when compared with the 160km we had to cover to get to Canyonlands. 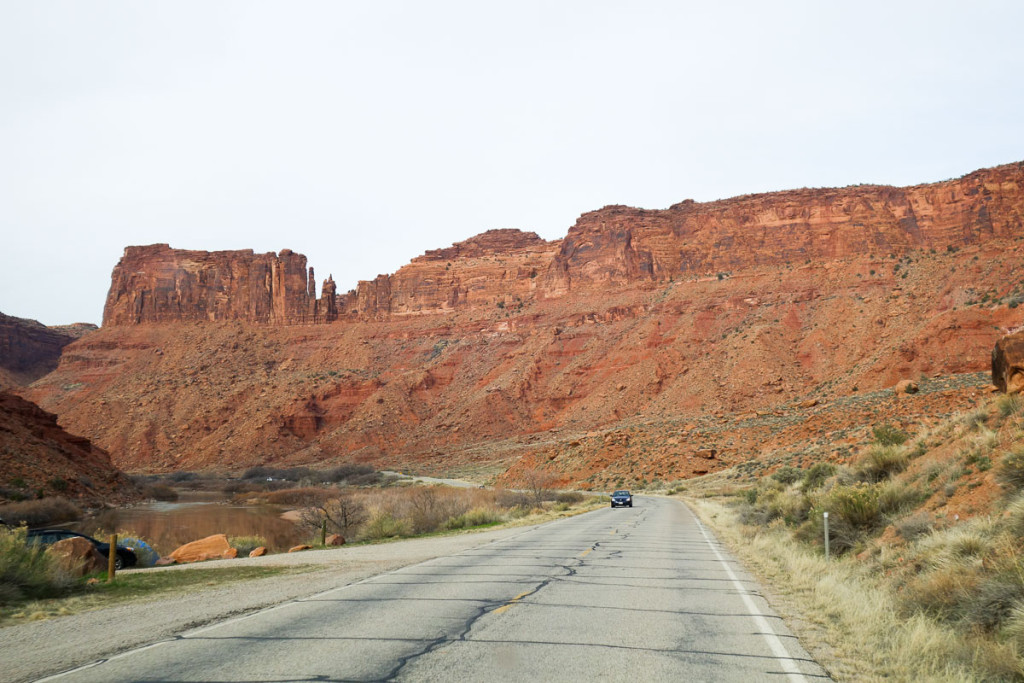 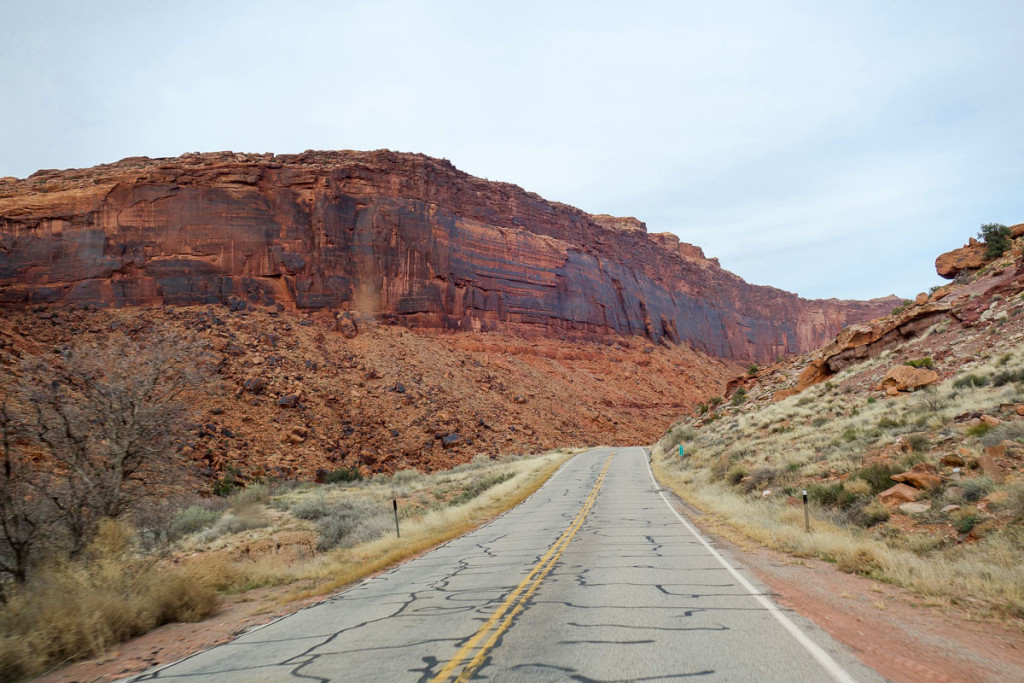 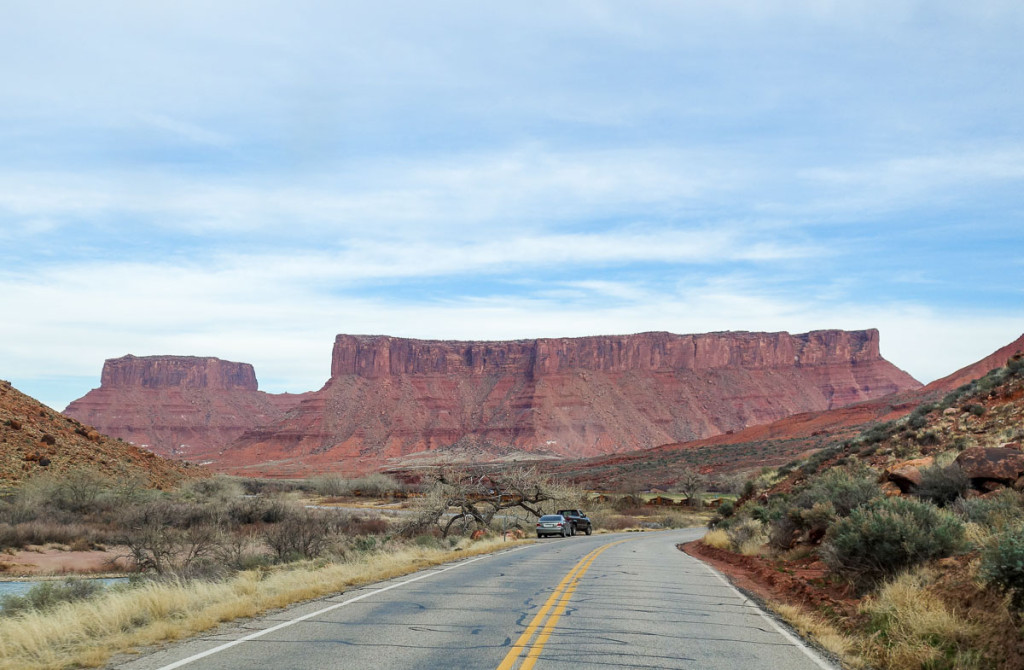 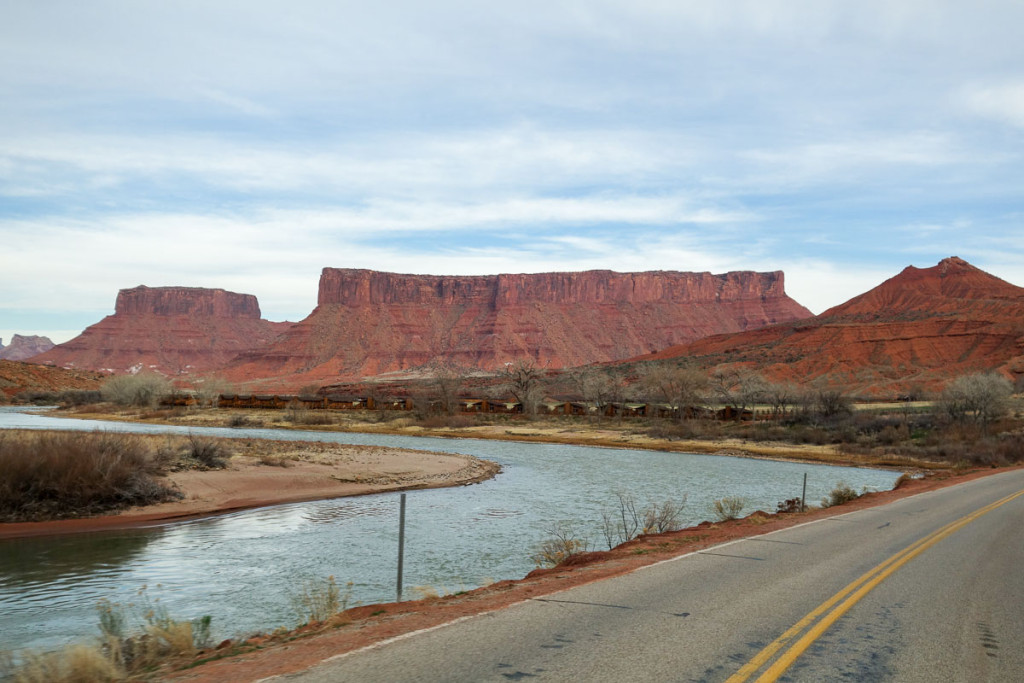 There’s a marathon taking place here shortly. Perfect surroundings for one. Enviable. Still, I guess not all marathon runners take notice of the surrounding scenery, no matter how sublime… Hmmm, maybe the slower ones.

And that’s it folks! Tales from the Utah side – completed. Hope you liked.