I’ve been in the USA countless times.

Usually it’s just for short stays with a few different places to visit, but there’s normally plenty of interesting tales to tell afterwards. Not this time! This time it was business, business, and again business. In this post, alas, there’ll be nothing too riveting for you, dear reader – just a few curious items…

…The first being… SNOW!

Now, you might think there’s no way a Russian could ever be interested in snow in other countries. Coals to Newcastle, right? But you’d be wrong. For this is the first time in my life I’ve ever seen SO MUCH SNOW – right here, in the U. S. of A.! A knee-jerk, subconscious urge was willing me to be offended: ‘How’s it possible? Give us our patented, trademarked snow back!!’ One word: odd. No, one more word: unexpected. 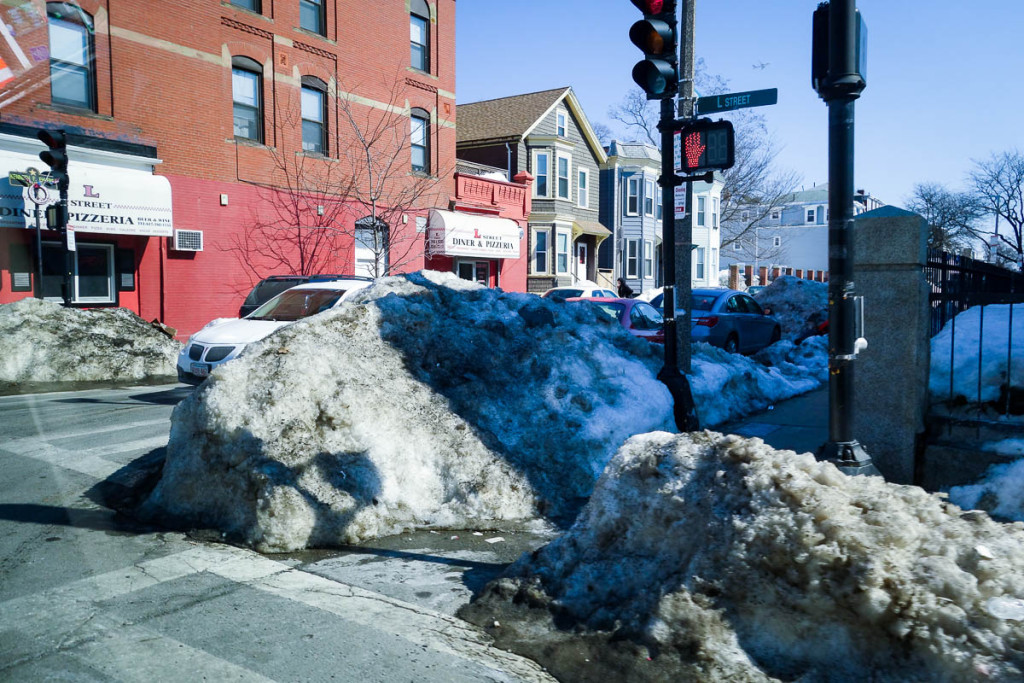 A far cry from the Everglades a day earlier :) 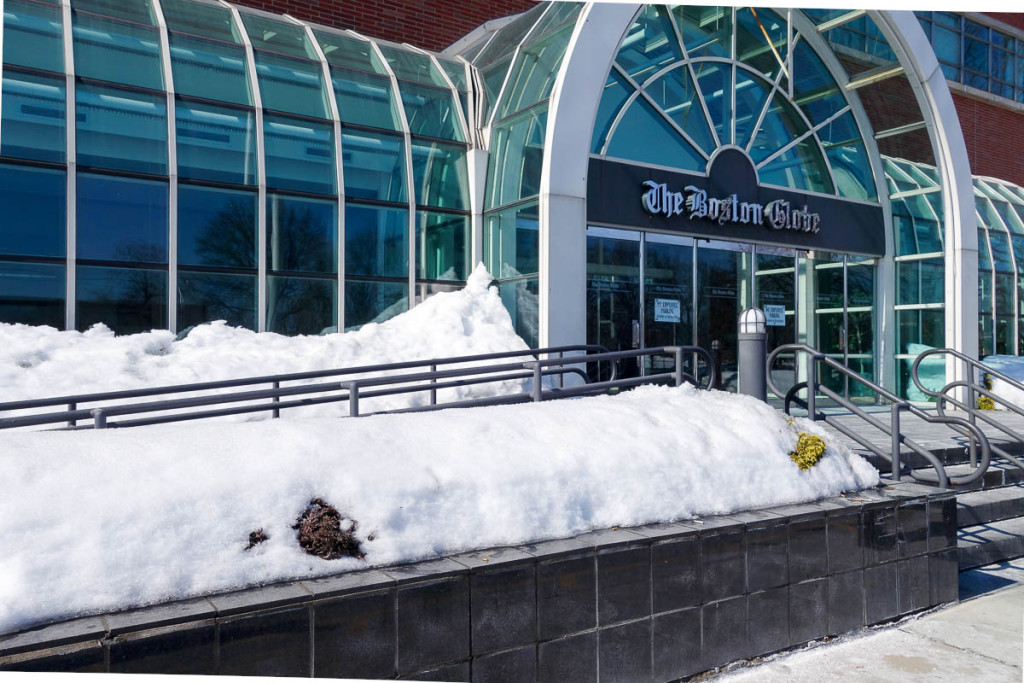 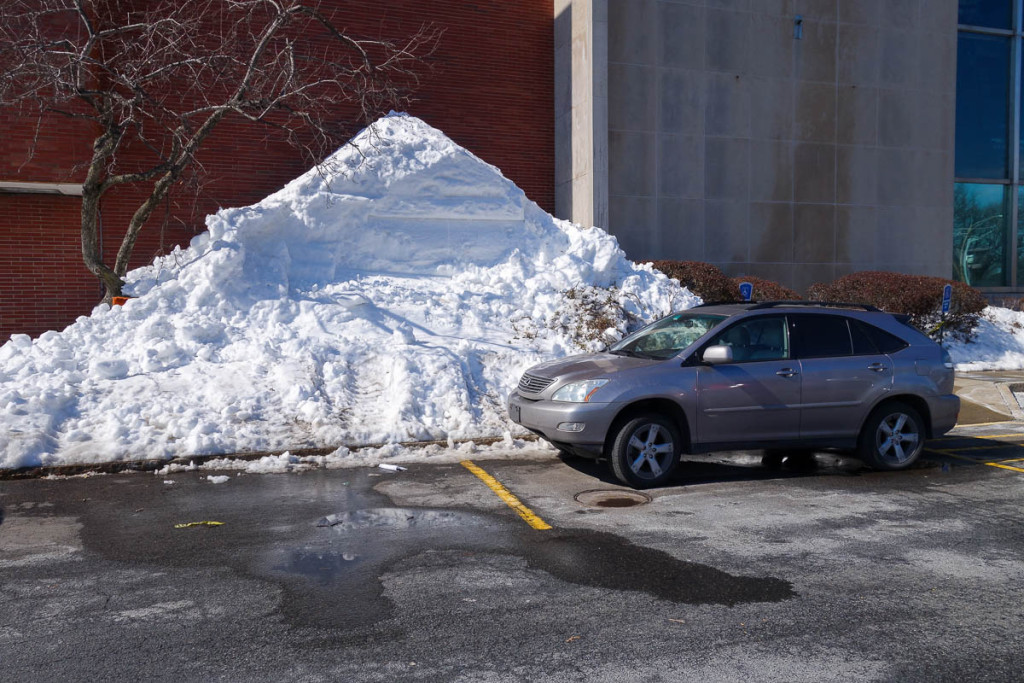 A few weeks ago here the weather situation was a lot worse, as you might have noticed in the world news. Then, the snow wasn’t just up to the waist, but over the head! And it was so cold even the waves coming in off the Atlantic were freezing up!! Have a look on the net for the pics/vids: incredible.

When we were there though things had mostly normalized, leaving just the huge dirty piles of snow by the roadside. Yep, we get a lot of that in Moscow too this time of year – just not quite so high.

Shame to have missed the tempest at its peak really. Will have to get back here in time next year. Haven’t seen anything so extreme in Moscow for several years. 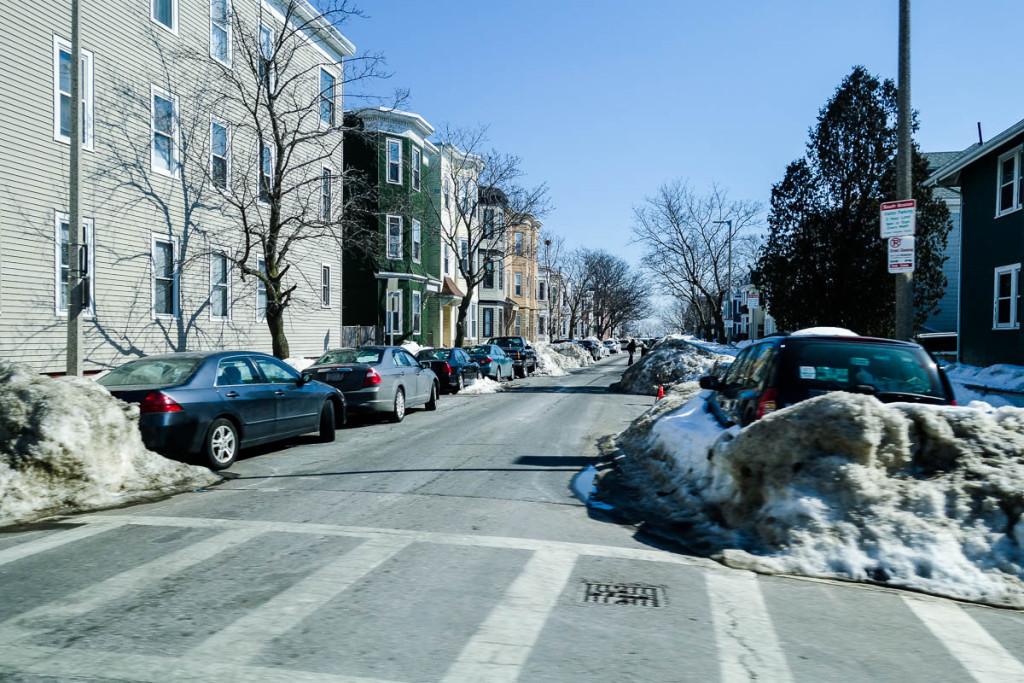 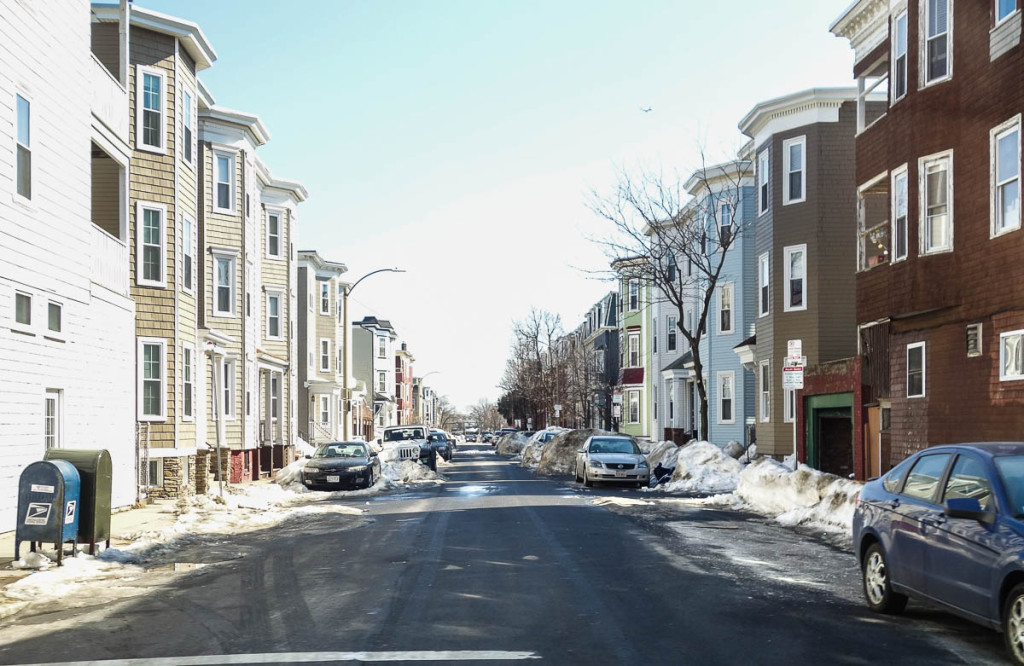 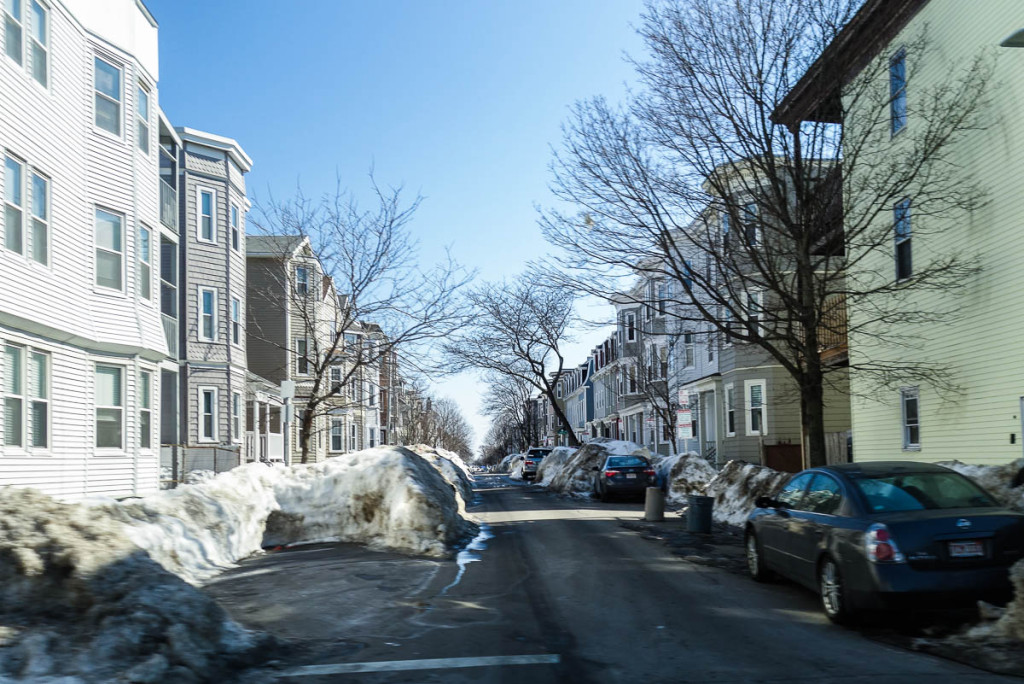 Heavy metal in the dock. Wonder if they listen to Rime of the Ancient Mariner on their trips out across the ocean :).

This photo was taken from our office in Woburn not far from Boston – just to empasize how the snow was all over MA: 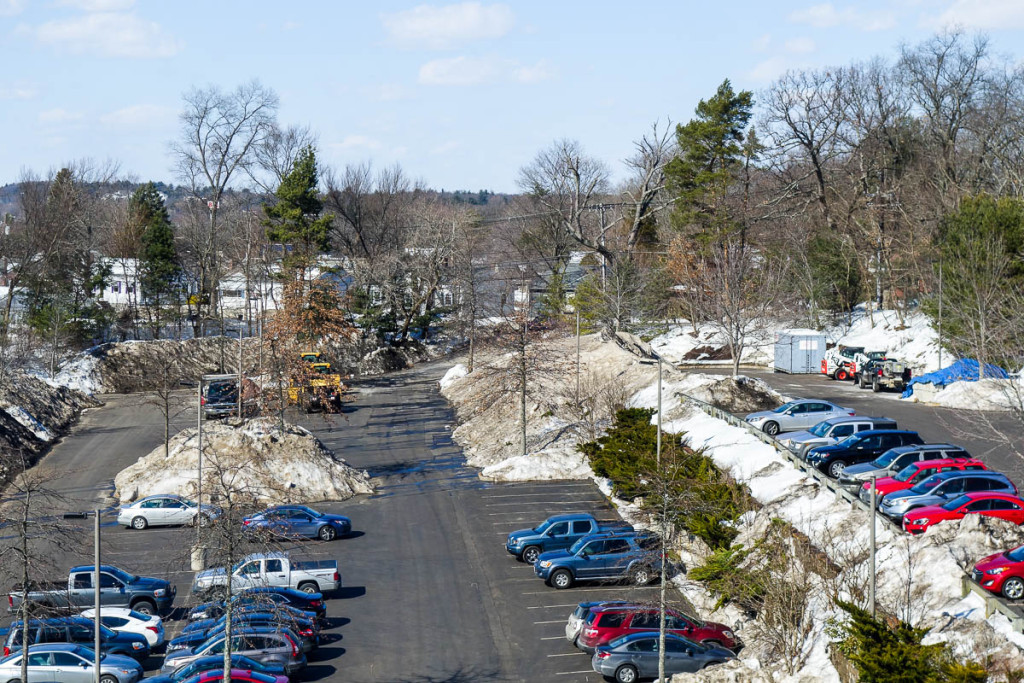 Now for a bit of nostalgia!

Some ten years ago no one knew who we were here in the US, didn’t want to know, and hardly welcomed us with open arms. KL brand awareness was… zero. Our clients numbered…(near) zero. The outlook for us… dismal. Nevertheless – we decided to get down to business and give it a go.

From the outset we decided that the retail market – boxes on shelves – was one we shouldn’t go for. It was too crowded as it was and we had poor positioning. And we’d have had to convince stores to remove an established (in the US) competitor’s boxes to make way for our green ones. But why would stores want to if the established brand was selling ok?

The corporate – big business – market we also kept clear of. In that segment brand power is everything, which excluded us outright before even trying. I recall big business’s reaction sometimes: ‘What-ski Lab?’ or ‘Kasper SKY – isn’t that an airline?’ ‘No – a news channel!’.

So we decided to fix our sights firmly on small and medium-sized business, whose proverbial doors were deemed much easier to get the proverbial foot in.

So how did we start out?

Well, first and foremost we needed to build up a partner network – one that would cover the whole country and introduce it to the world’s best – green! – antivirus! But how to get that going? Get on the road (and in the air)! Which is what we did…

Partner programs, conferences, exhibitions, meetings and so on and so forth. But the main thing: a ‘road show’ – several of them. We’d rent a small jet and ‘do America’ – tour it, rock’n’roll style. Not quite. But there was some rock normally on the jet’s music system standing in for muzak :). 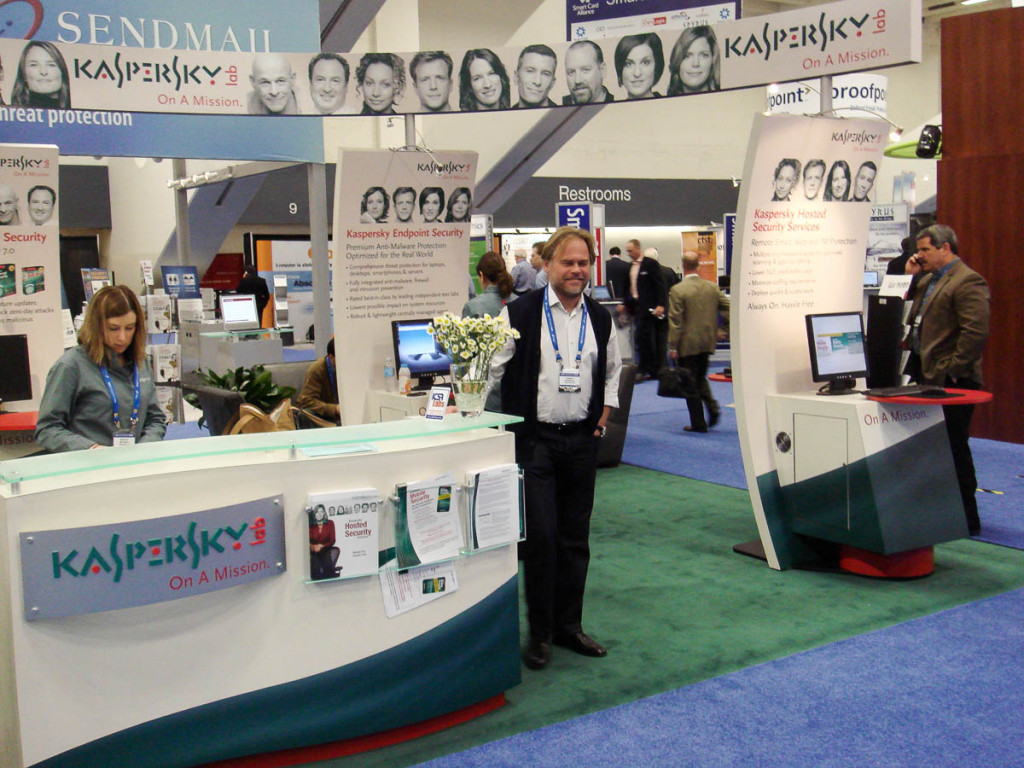 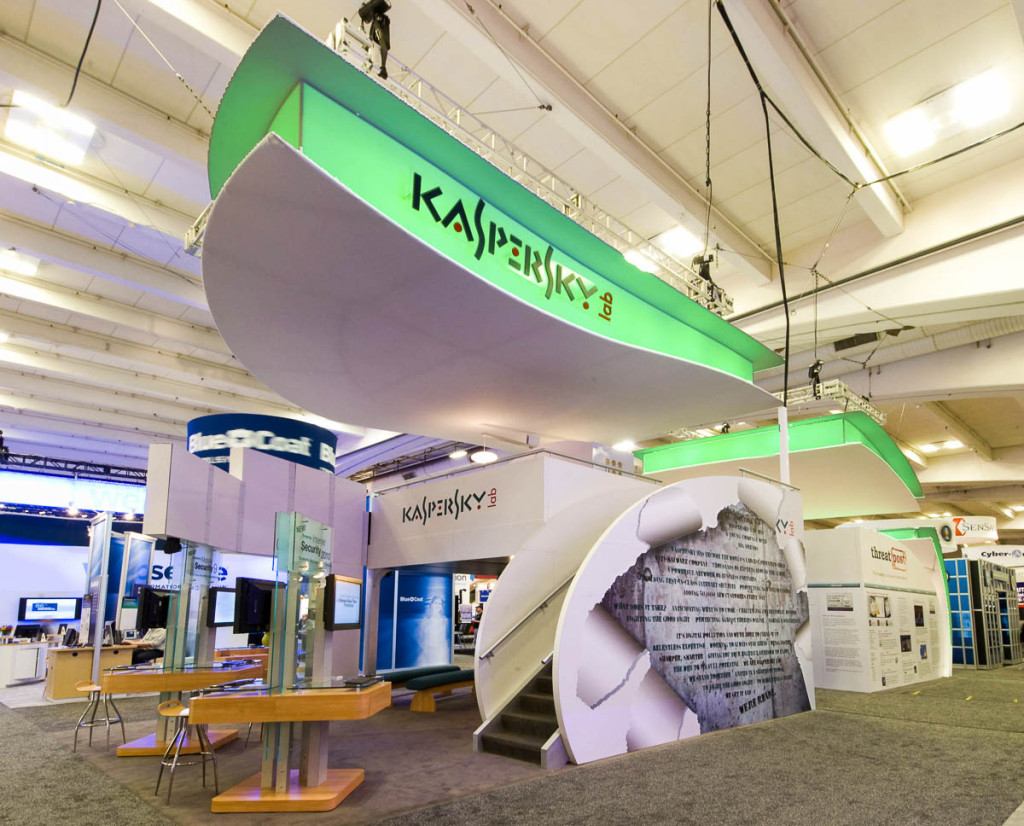 The regime was tough. Sometimes too tough.

Often partner mini-conferences would start at the crack of dawn, and I’m no lark. A product presentation, then a marketing briefing, then a speech on the ins and outs of viruses and hackers and how we combat them. Then several meetings, then several deep breaths, then another string of meetings. Then came the media. Then I look at my watch and… it’s only midday!!

In the afternoon it was more of the same – presentations, speeches, meetings, interviews. (I started to understand what it’s like for rock groups doing world tours. Sounds glamorous and enviable at first, but then – they have to play the very same set EVERY night. Think about that. But I digress.) Come early evening we’d all pile back onto the jet and we were off to the next city.

Once there I’d check my email, write my blog, and suddenly it’d be long gone midnight! Five or six hours of kip, and – groundhog day style – the same thing the next day: Morning – partners; noon – press; afternoon – repeat; evening – plane to the next city. How I – we – quite survived it I’ll never know. How rock stars survive it I’ll never know. Maybe that’s where the drink problems come from? We wouldn’t touch the booze however – far too much work; and clear heads needed. 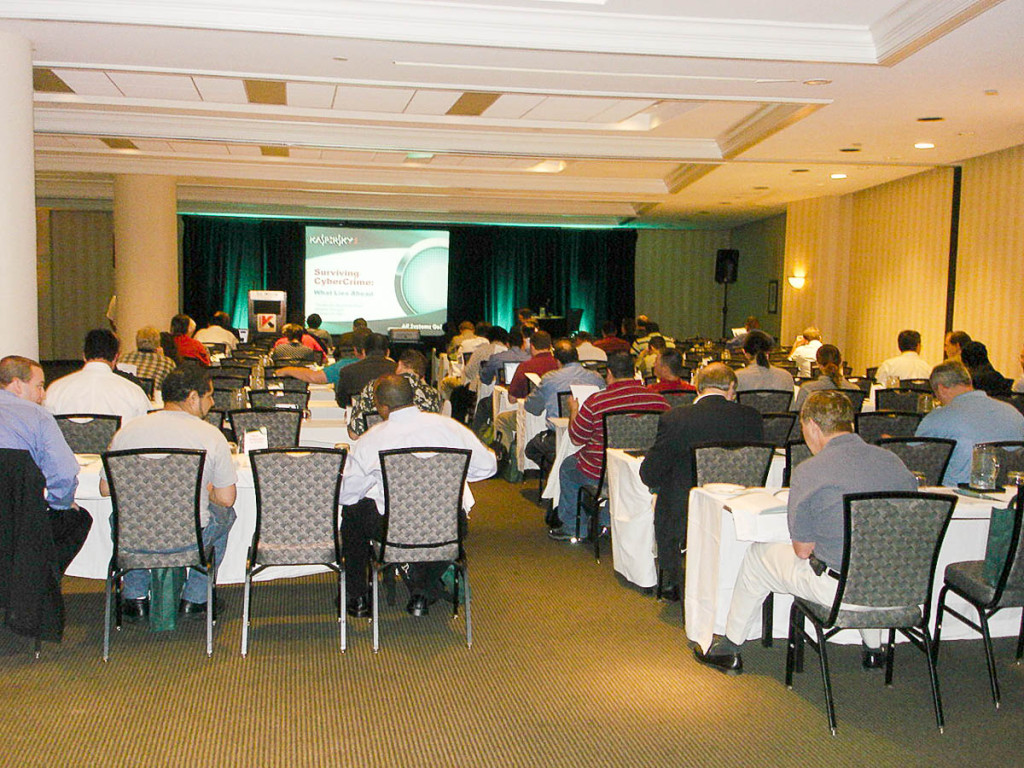 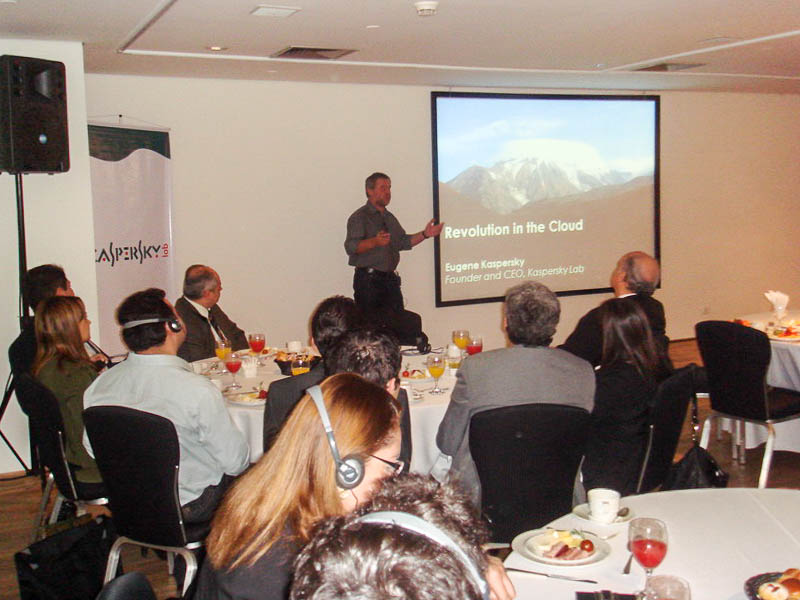 Here I go again on my own

And this is about when our celebrated KAV version 6 made its entrance – just at the right time: A home-use antivirus developed from the ground up, written on entirely new architecture, with a ton of other useful (and breakthrough) features, and with low resource usage. The product was way ahead of the competition – all of it.

Next we made a most unusual move – we priced it high. Then we went to the retail market. We told the retailers about our simple and easy-to-understand positioning: ‘premium product, premium price’ – something that just wasn’t there in the market.

Retailers liked the idea. At first the small chains went for it, then the medium-sized ones, a bit later – Walmart, Best Buy, Office Depot and the rest – all stocking our boxes on their shelves and actively selling them… 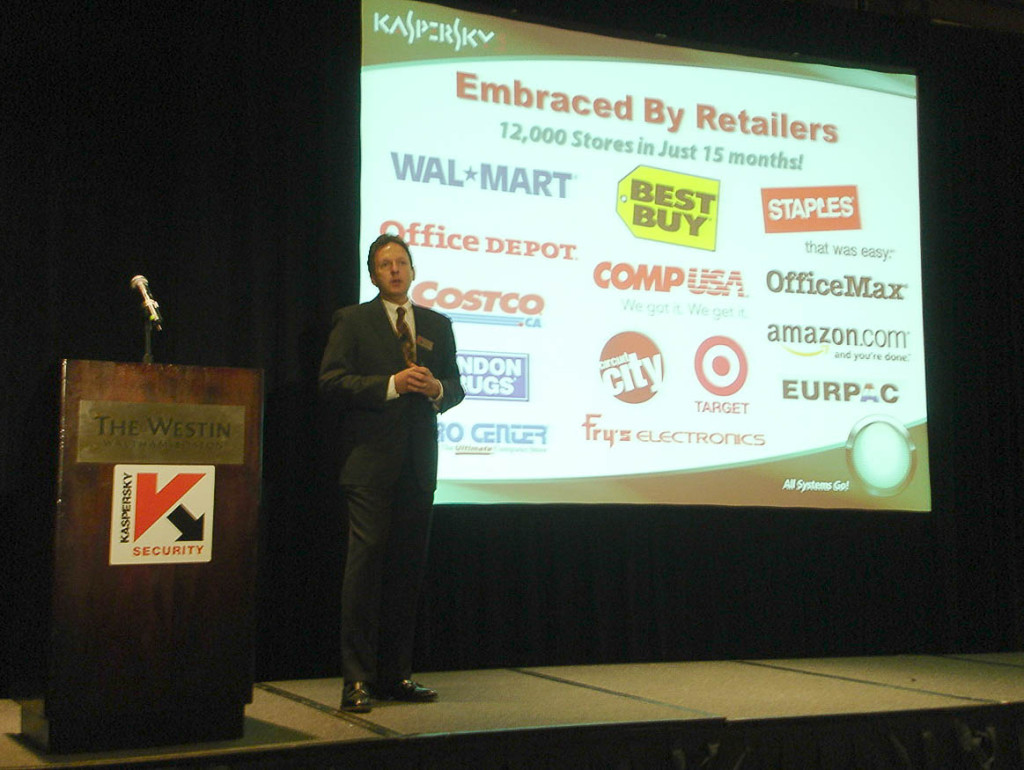 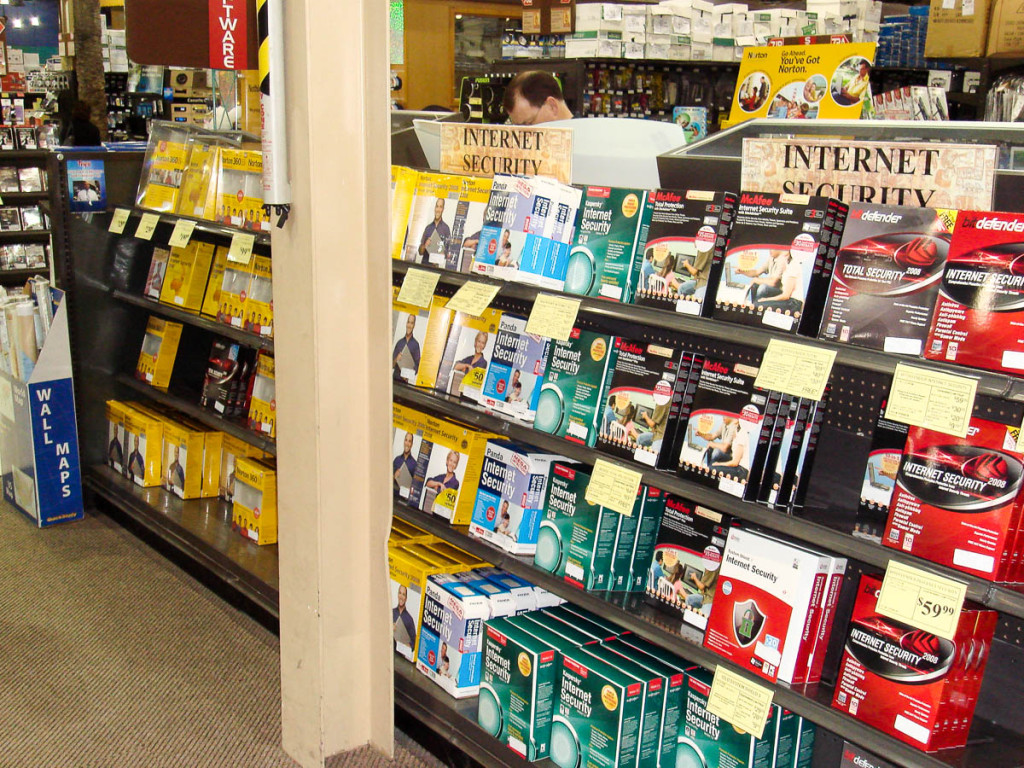 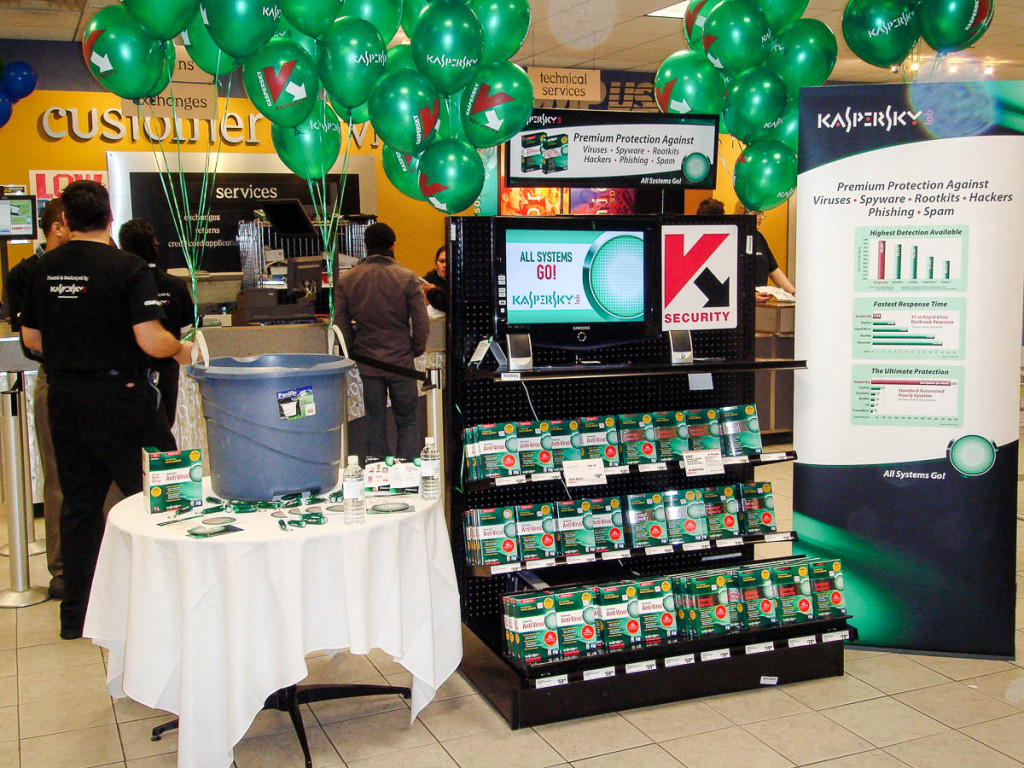 …Selling our green boxes so actively in fact that a few years later, one day in spring 2010, the agency NPD published a report on retail sales of AV software in the USA. And guess what?… 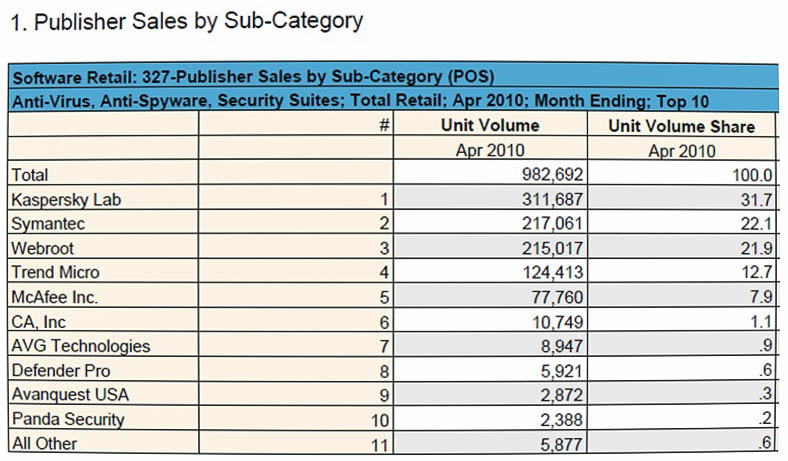 Yep. We did it. We’d conquered America. Its top AV retailer!

So that’s how it all started 10 years ago in North America. Just the other day we celebrated our jubilee in Woburn! 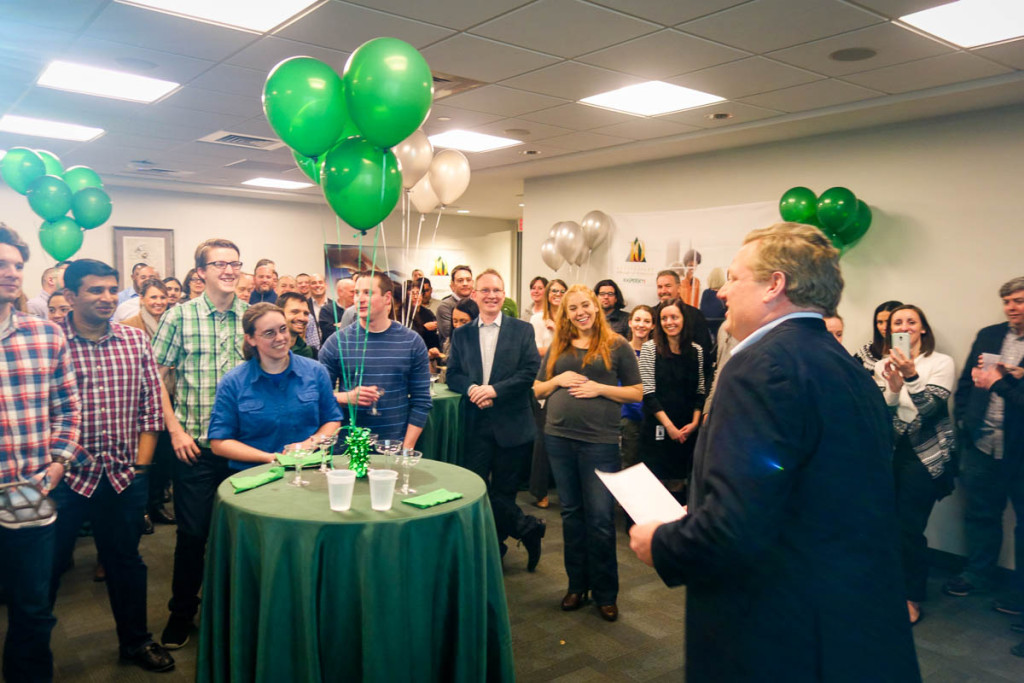 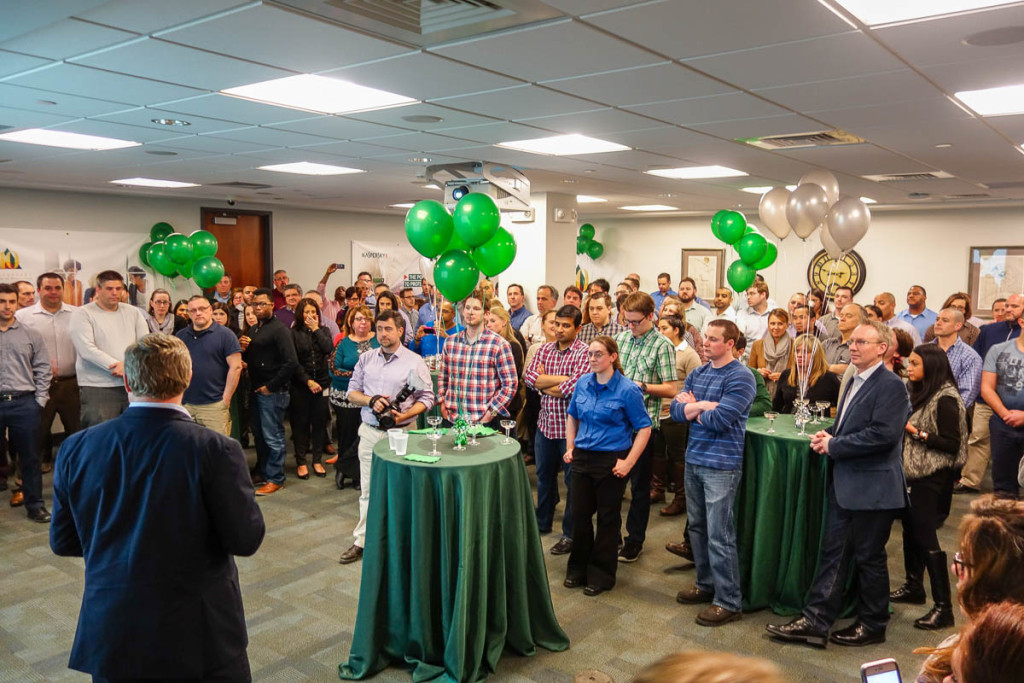 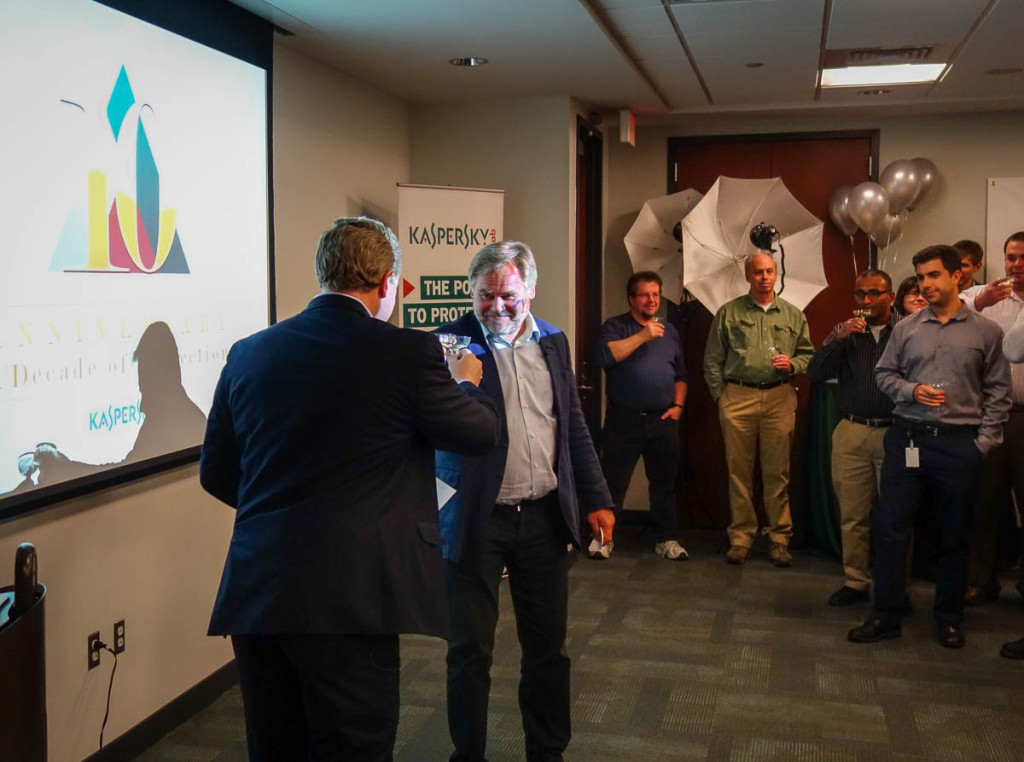 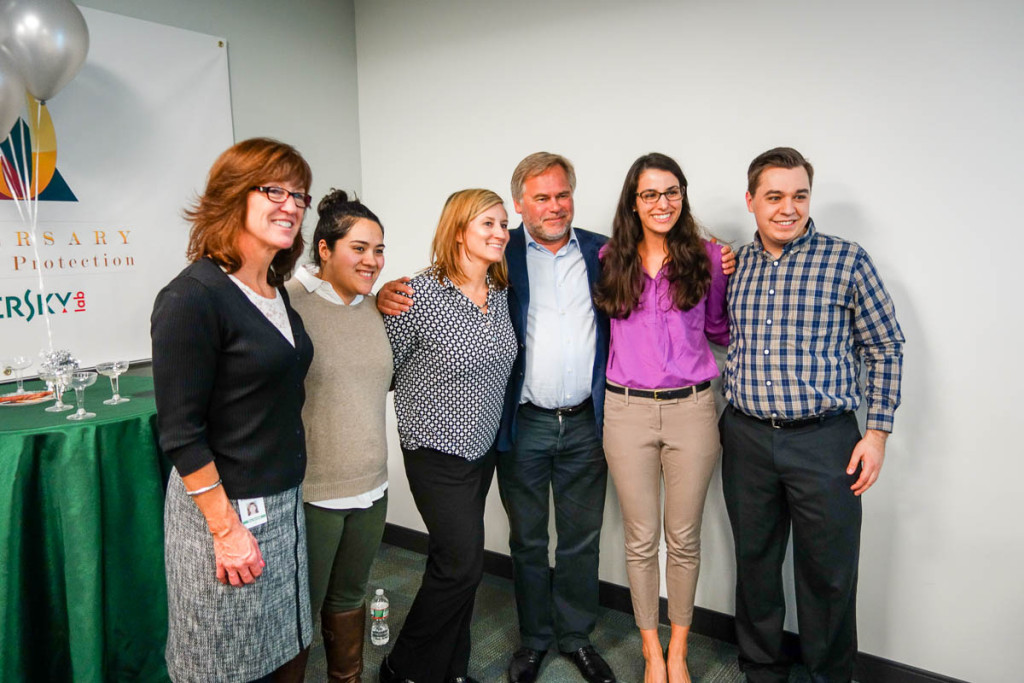 Normally I write a bit lot about the touristy installments of my trips to faraway lands. This time, however, I give you… nothing. Our schedule was so tight and full that we had no time at all for any sightseeing. Well, maybe apart from seeing New York through the window of the plane… 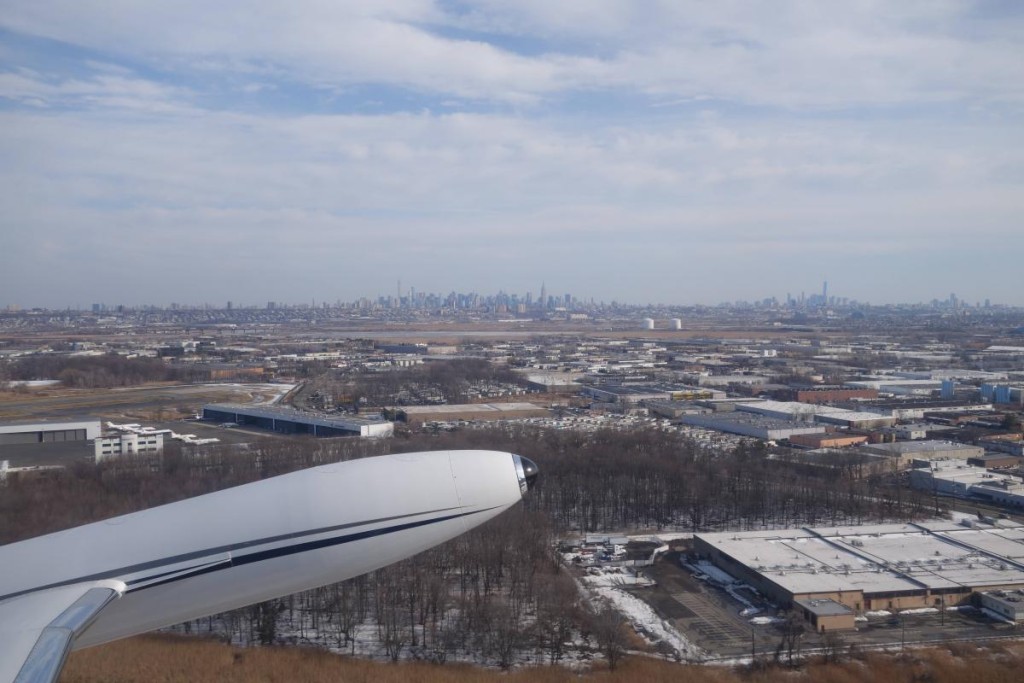 Yes, this time, like those in the past here – we flew a lot, met a lot, conferenced a lot, interviewed a lot… but not a thing to report back on I’m afraid folks.

Oh, there is just one thing… remembering your room number…

The standard question I ask myself waking up for the umpteenth time in the umpteenth hotel here is ‘where am I?’ It’s easy to forget. But a more inconvenient consequence of city-hopping memory loss is… forgetting the number of your hotel room! The number of yesterday’s room – yep: 909. Today’s? Not a clue. Duuur. Back down to reception :-). Must start entering room numbers into my phone.

My favorite, adored, trusty and cherished Sony Ericsson cellphone finally gave up the ghost and passed away in its sleep. At least it didn’t feel a thing. Yes, it seems the time has finally come to change my dog. But I’d become so attached to it over, ooh, how many years? Almost eight – always with me on my thousands of globetrotting travels. I do believe it was the most traveled Sony Ericsson of that model – ever! The one before it was exactly the same, but it died a heroic death in a forest in 2007 after getting drenched in a hurricane. 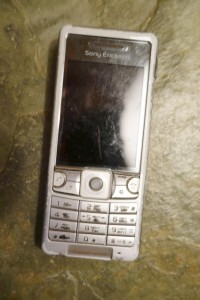