Top of the day to you, folks!

Here we are with the final installment of travel notes from Ireland – and another magical natural wonder from the west coast of the country: Slieve League.

The mountains this day were neither much higher nor steeper than the ones we’d seen the previous day, but the views, somehow were a lot better… 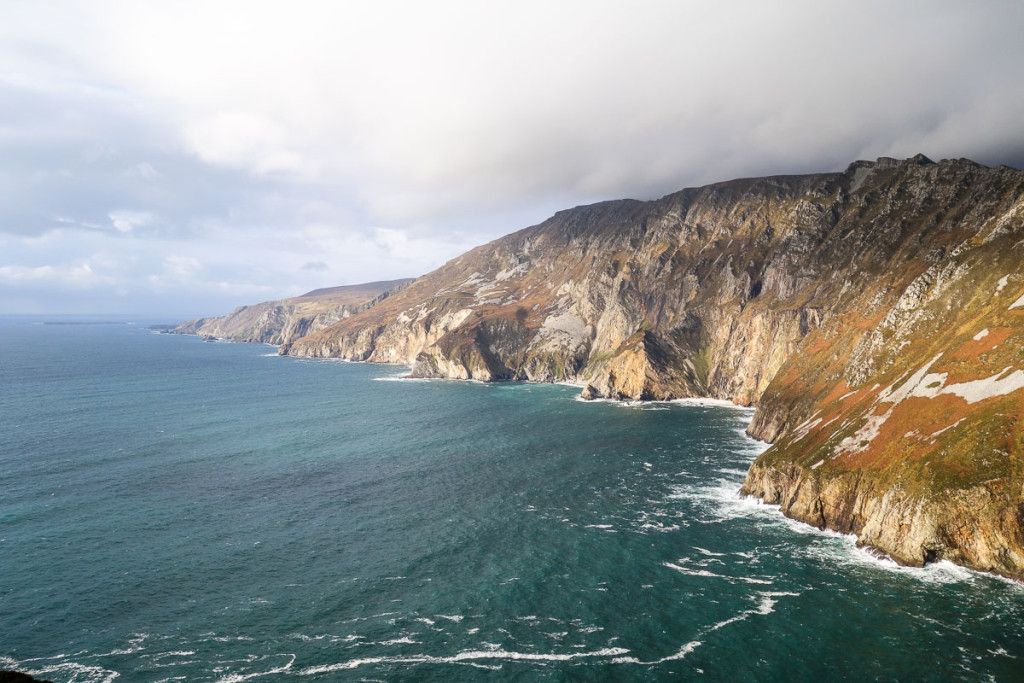 I could stay the whole day at Slieve League cliffs #Ireland just looking at the surrounding landscape. Or a week if properly equipped 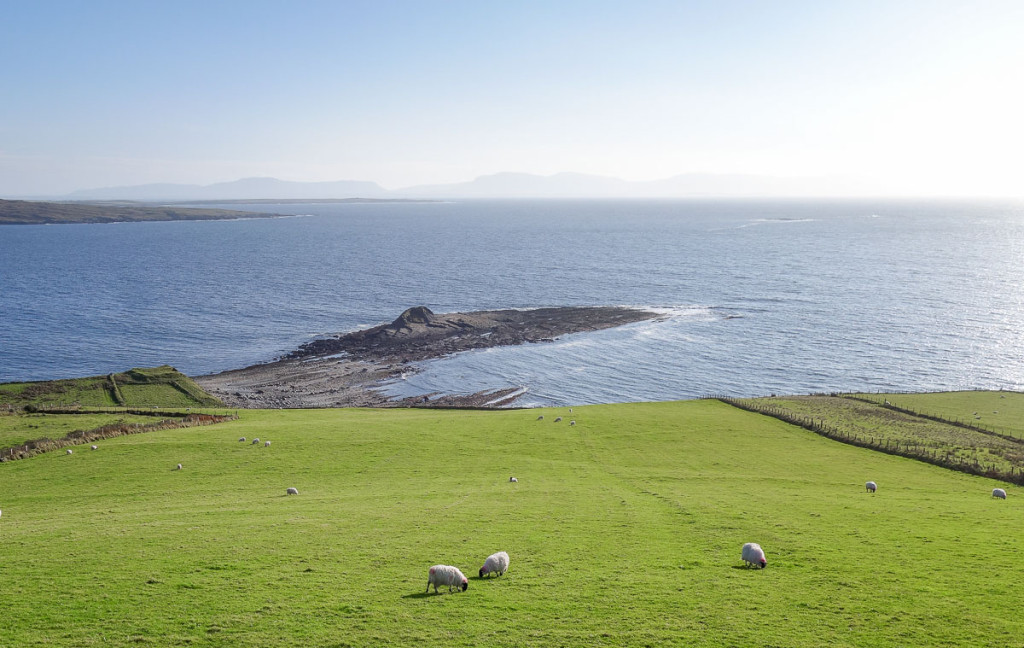 There are some ancient paths here – ones favored by pilgrims of old on their pilgrimages. Last century they were tidied up, made more passable, and had signposts added. There are two main routes: one quicker, one slower. 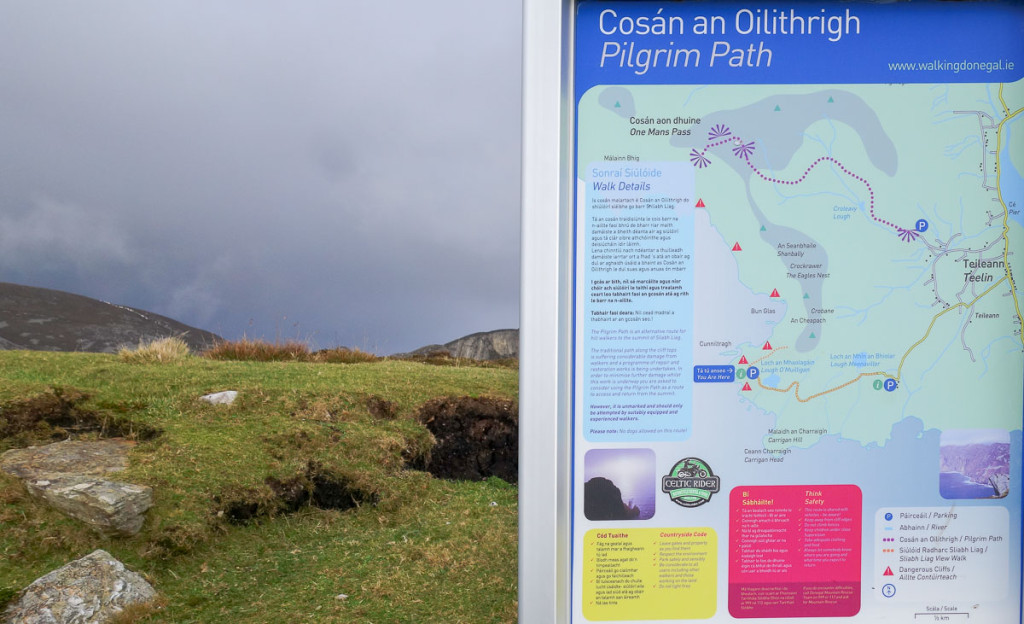 We couldn’t make our minds up which one to do – so did both. Thing is, they’re not designed to be both walked the same day. We found that out later in the afternoon. In the meantime, it was a good job we took the full-Irish breakfast option at the hotel. Sure needed those 1500+ calories as fuel.

The left side of Slieve League is pretty easy going; the views – pretty very pretty! 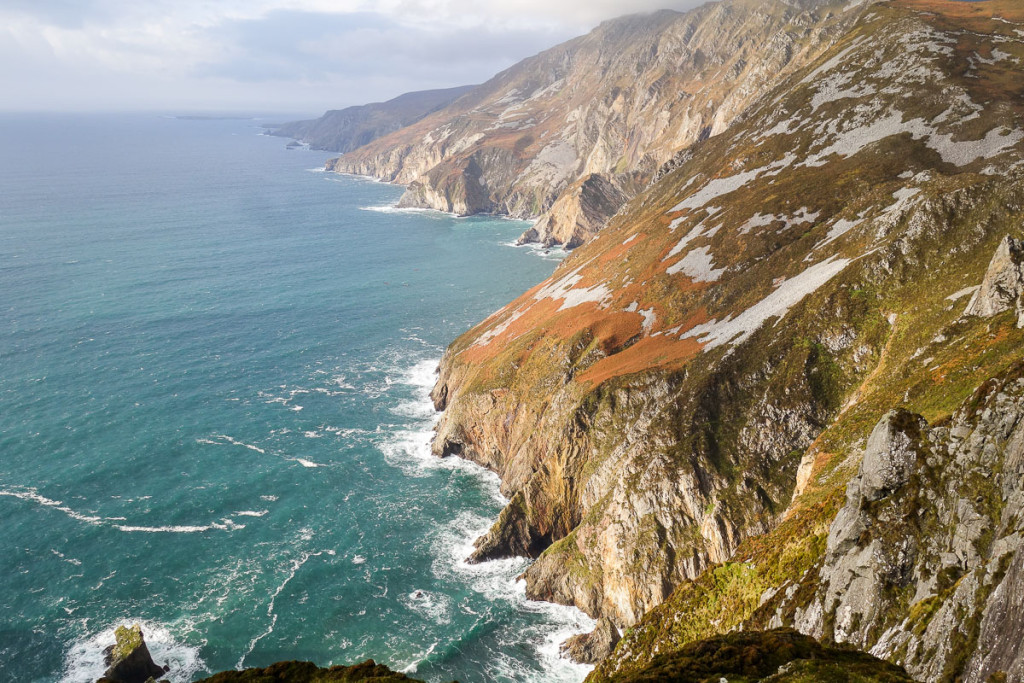 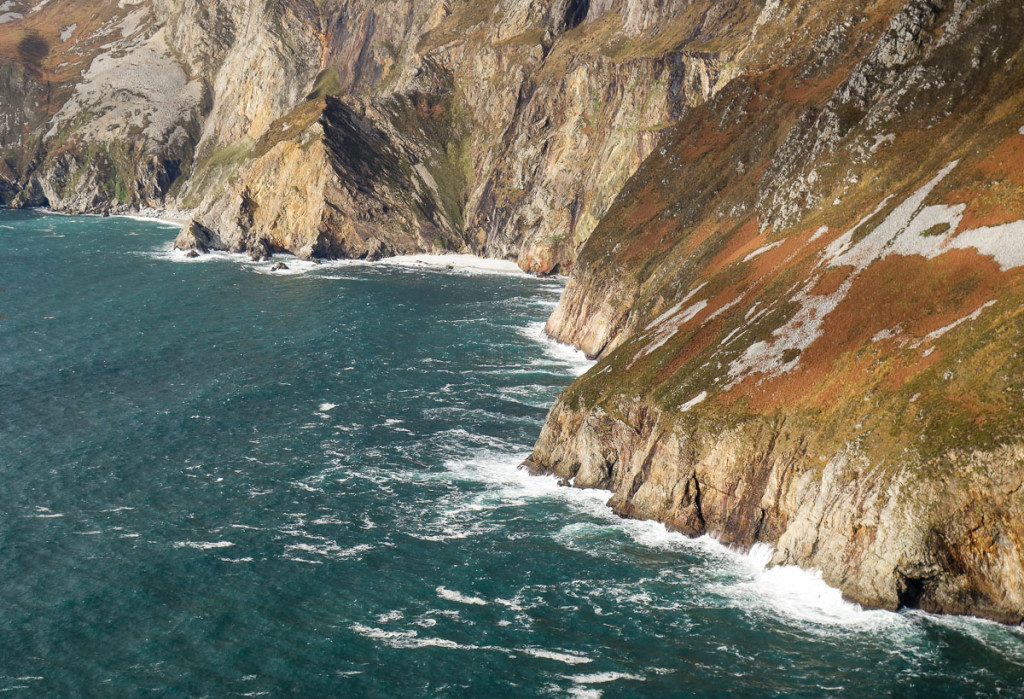 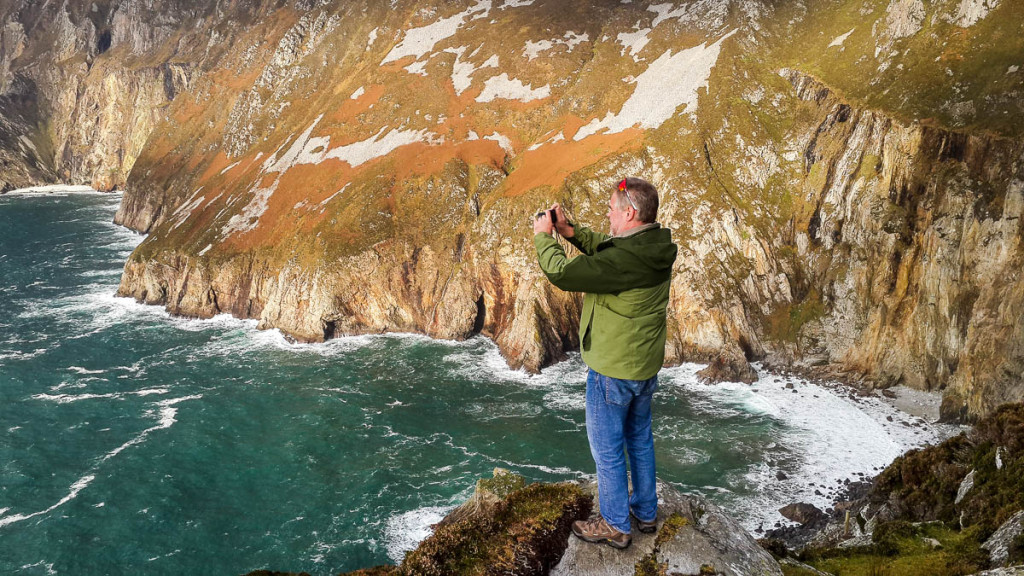 The authorities have done a real good job at taming the wild outdoors here to make them more tourist-friendly. Steps have been installed along the steeper stretches, and the flatter parts have been made a lot less muddy and messy with the addition of carefully positioned rocks. Jogging along these rock paths is really something – you’ve got to keep looking down to watch your step, so you don’t notice that you’re really exerting yourself – you’re too busy making sure you don’t miss a rock and twist your ankle!

Yep, these stone paths are just great. Not just for jogging, but for walking too – they make treacherous wilds much more accessible, so the less sporty – or the less young – can enjoy the hills too :). 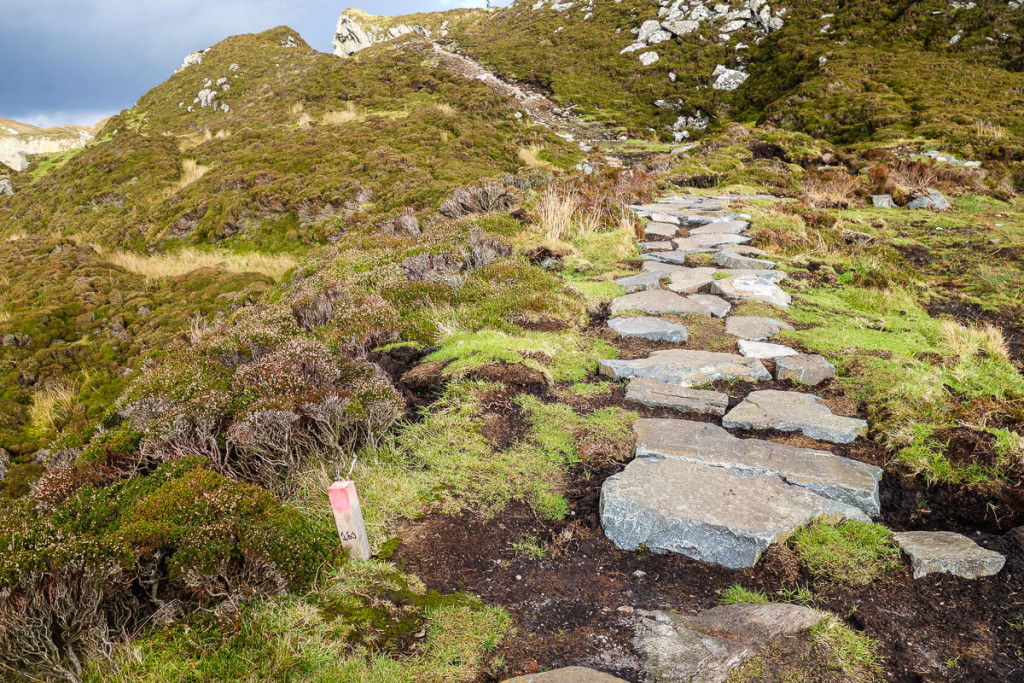 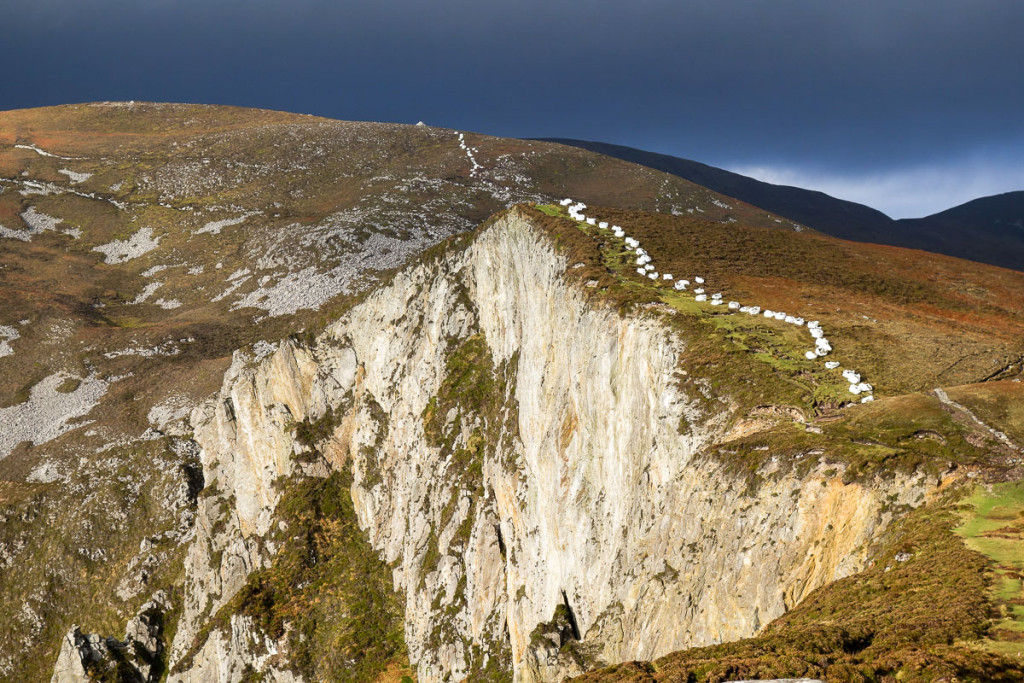 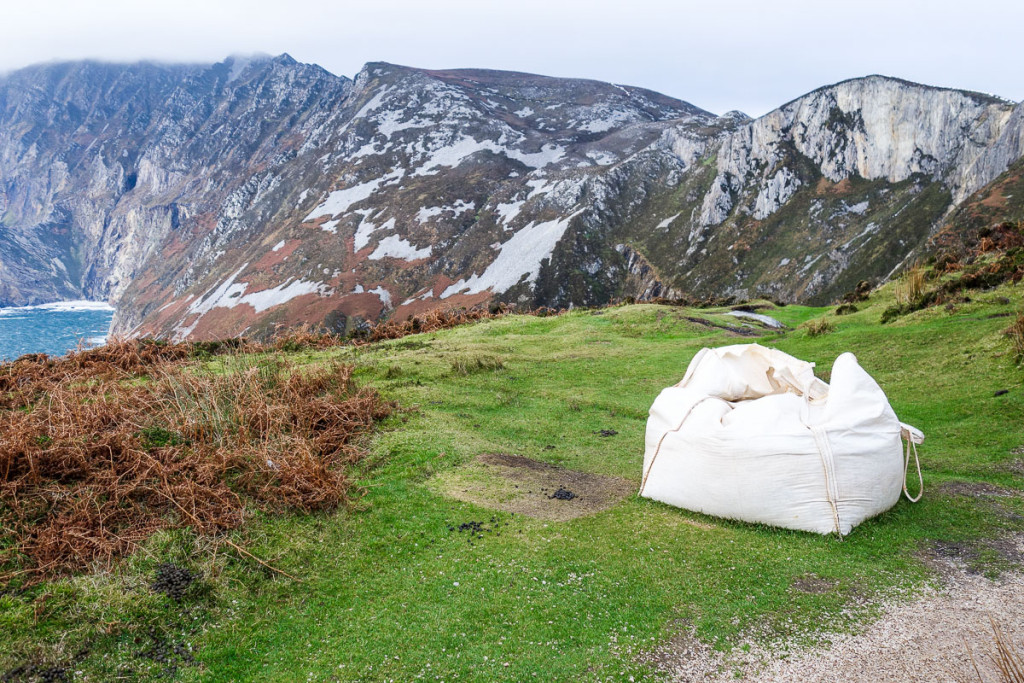 Bags of grit for when it gets icy

My travel companion A.B. remarked that the main difference between this day’s views and those of yesterday was the level of meditativeness. I concurred.

The Moher Cliffs are just brutal. The Slieve League cliffs are… ruminative. We agreed that we’ll have to return one day armed with a good Irish malt and just sit for a few pensive hours taking it all in (the scenery and the malt:). Then again, the whiskey would have brightened up the melancholy mood of yesterday’s Moher experience caused by the terrible weather conditions. But I digress. 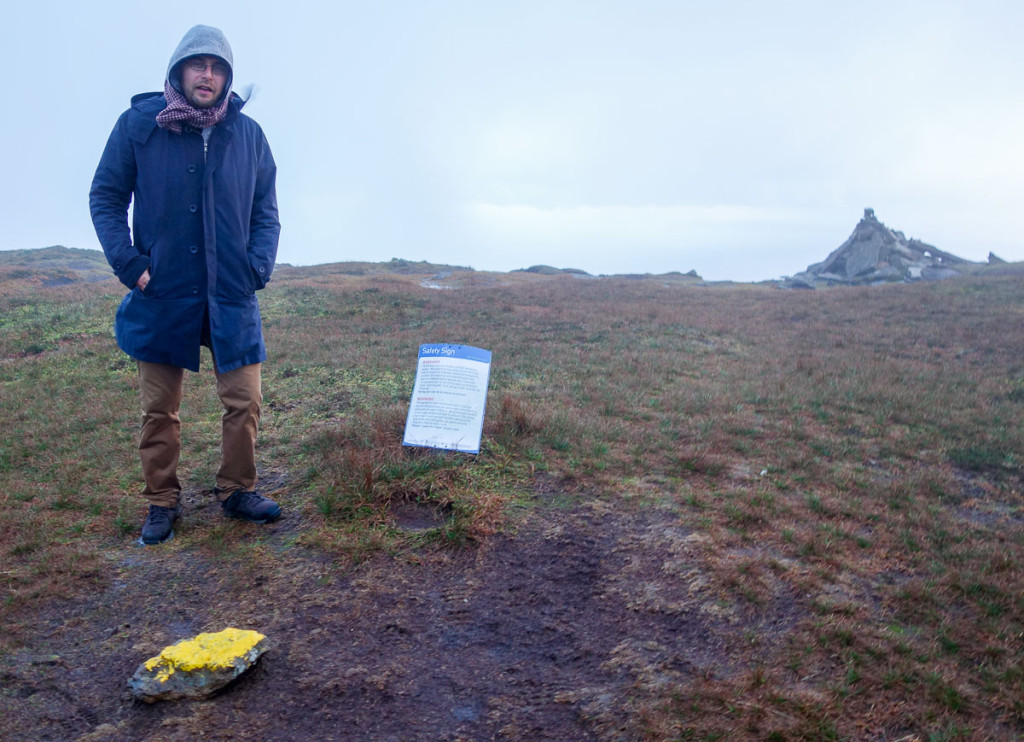 A good few hours into our trek we decided there’d be little point clambering up to the summit as it was shrouded in cloud. It was too far, too high, and what would be the point – we’d not be able to see anything for the mist. 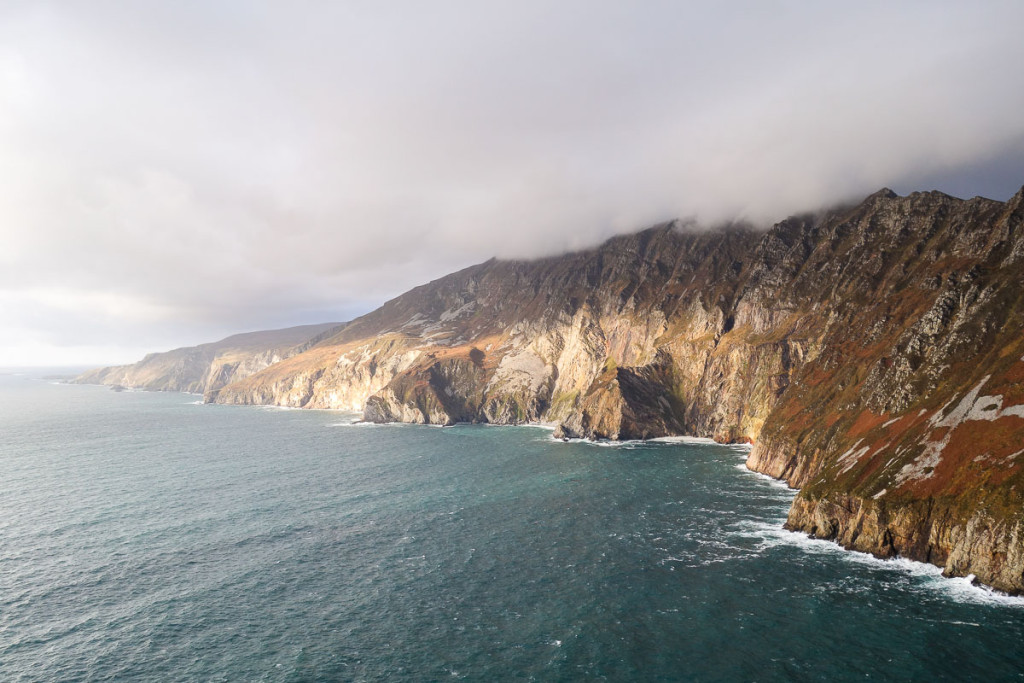 However, having gotten to the end of the first route, buoyed by the good mood caused by sightings of triple rainbows, we decided the heck with it and let’s get the second route done quickly too. After all, we might finally get to see an Irish sunset to top off our trip. 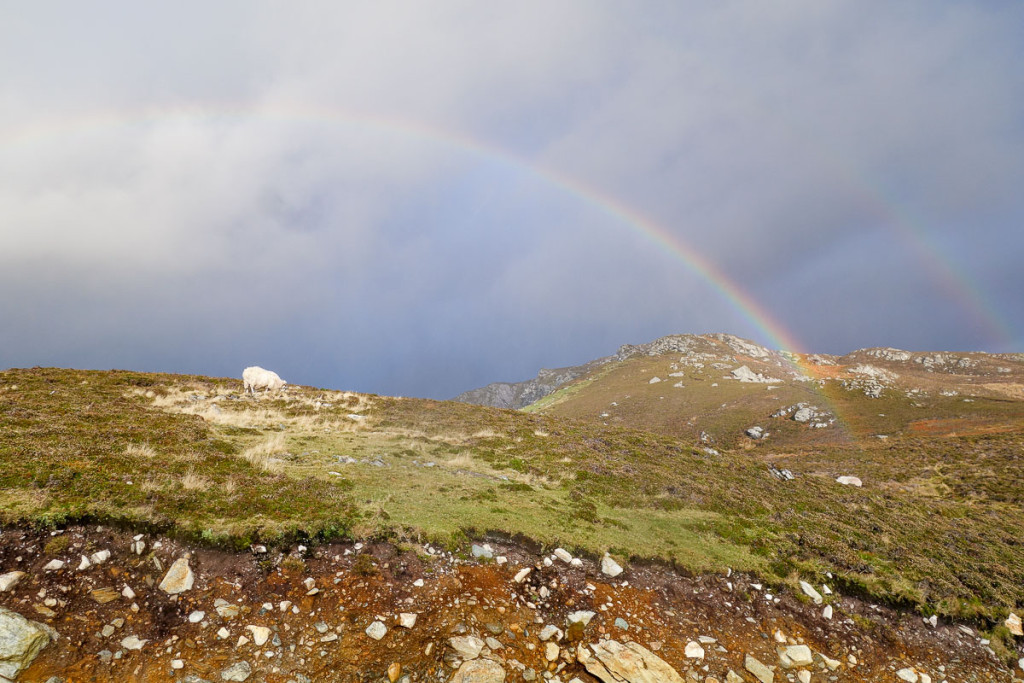 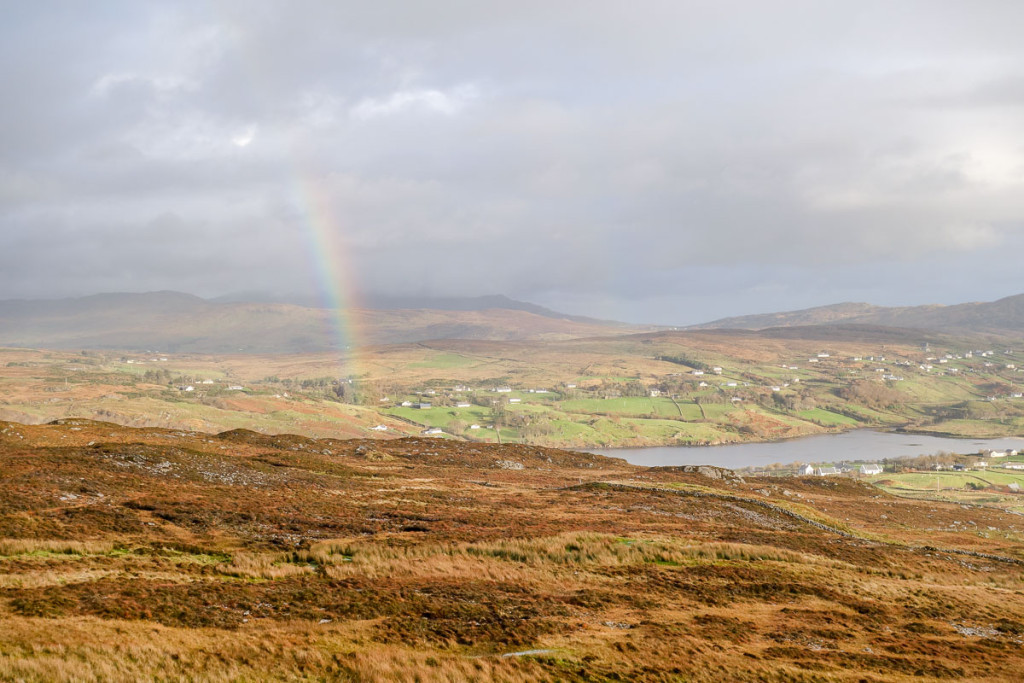 Can you see the pot of gold?

Our planned quick march along the second route turned out a little different to what we expected. After 20 minutes of trotting up a slight gradient, the path turned from ‘OAP-doable’ to ‘hard as hell – only for stamina athletes’. We then had 40 minutes of clambering over really boggy stretches of path where the rocks had been overrun, and all this under a thick fog and then rain and then wind! 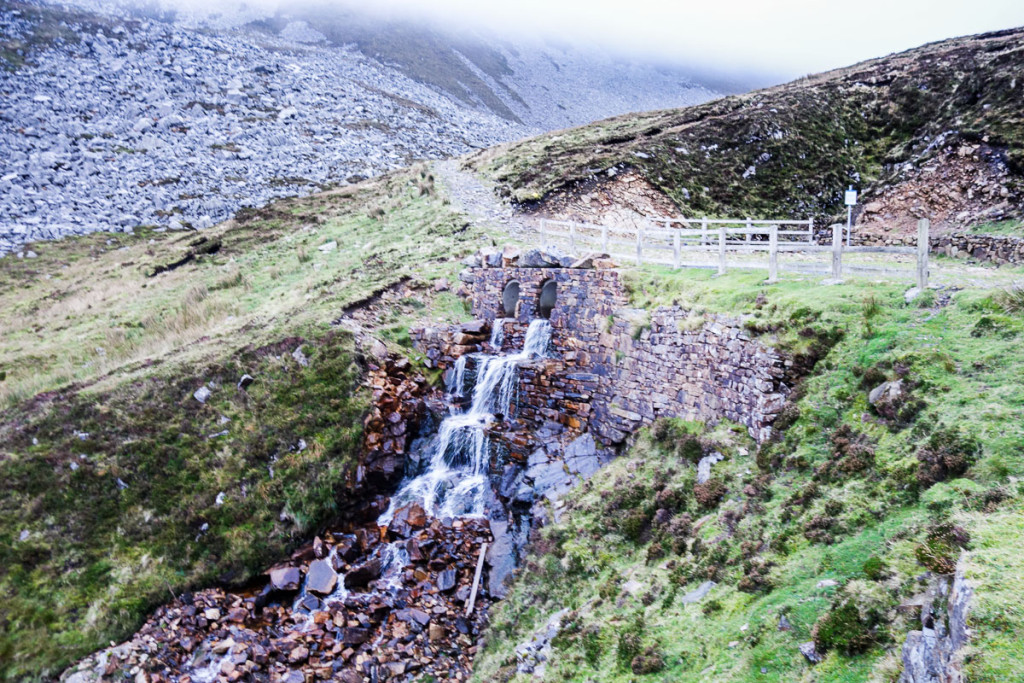 It turned out that longer route takes you up to the very peak of the mountain, which we sure weren’t planning on, as I’ve already mentioned. But what’s started must be finished – so on we plodded. Next time we’ll have to be a bit more suitably dressed; jeans and sneakers just aren’t up to it – you just get wet and cold and somewhat miserable (again!). You need warm-waterproof-breathable attire from head to foot.

A.B. summed it up nicely: “These sheep sure are hardy creatures. Look how easy it is for them – roaming about here year-round. I bet they’re laughing at us struggling with just a few hours up here.” 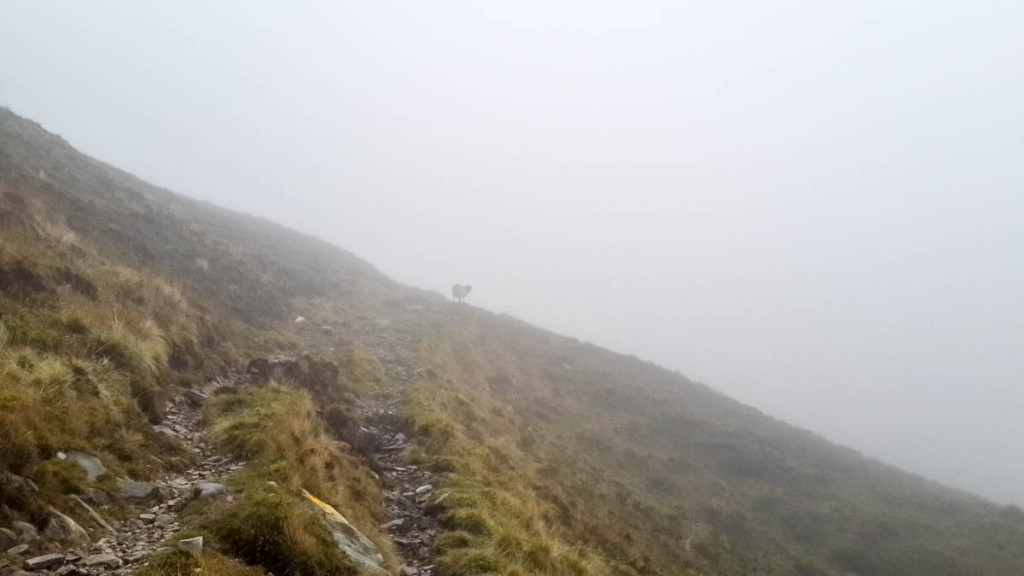 Can you see it snickering? 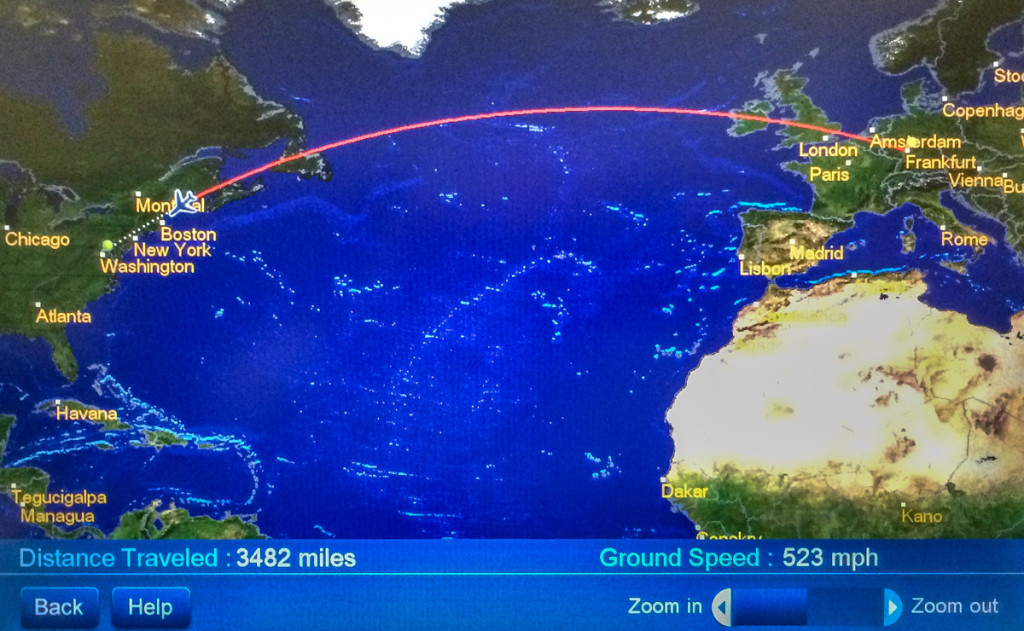 Finally getting up to the top was worth it though. Oh my word: what a view – and the much anticipated sunset too – bingo! 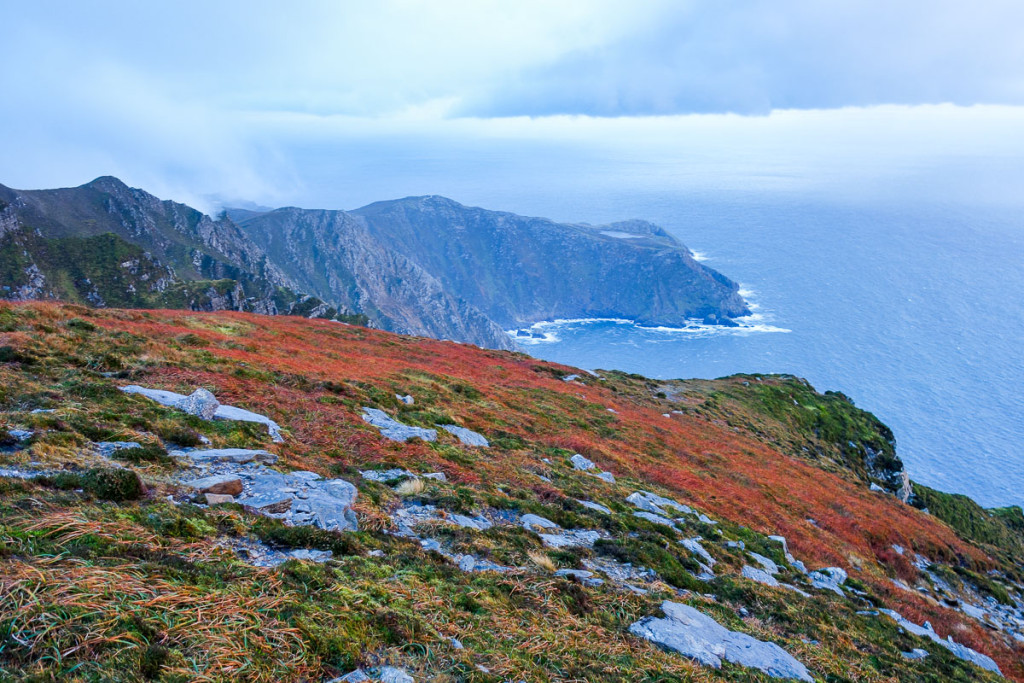 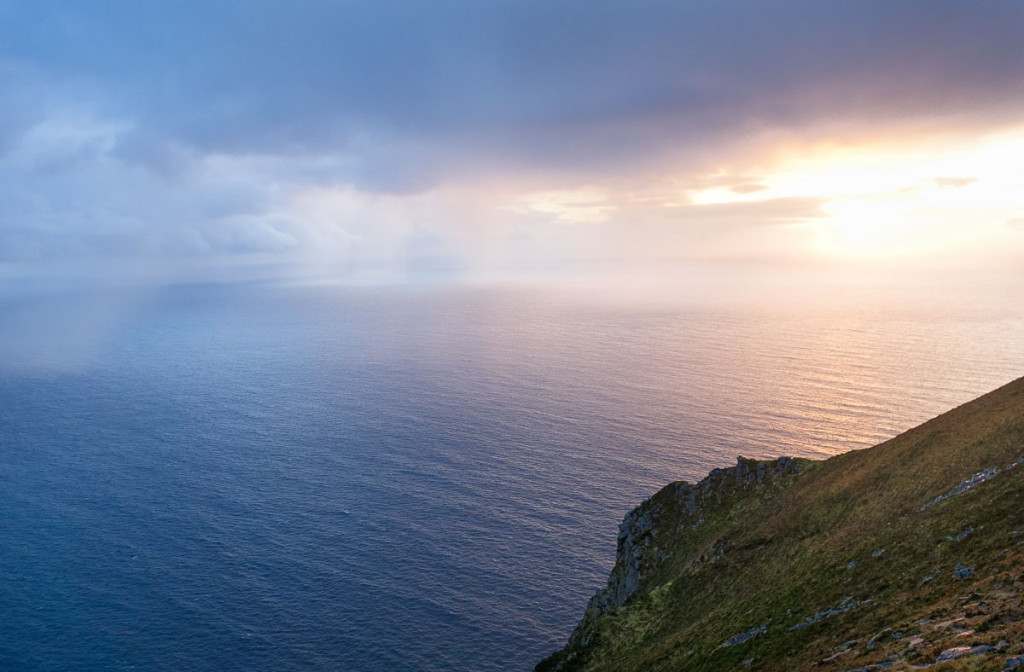 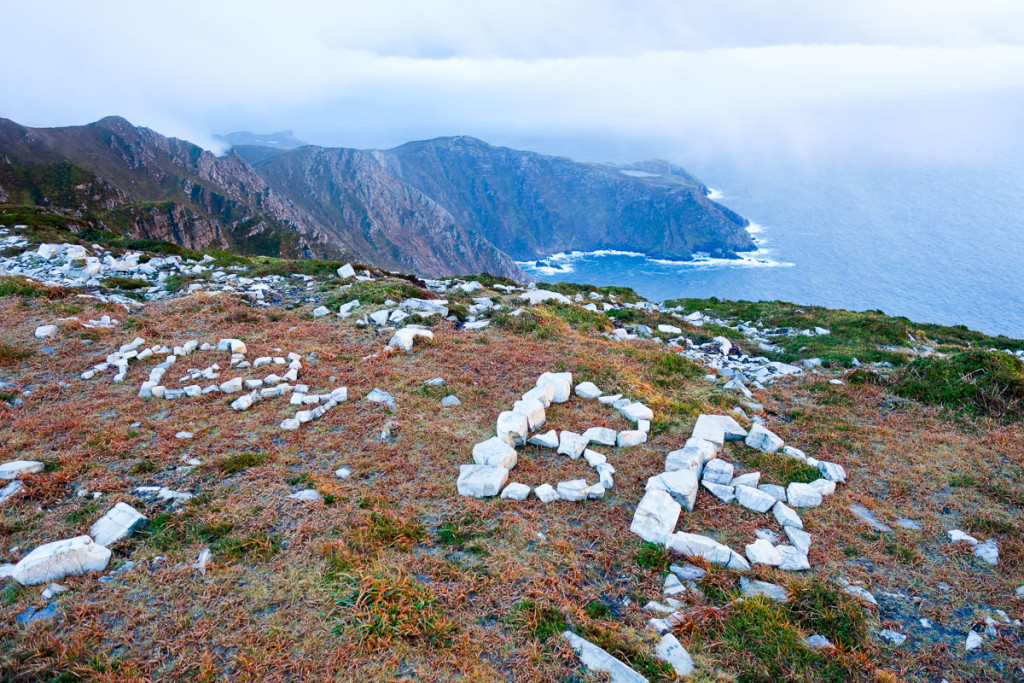 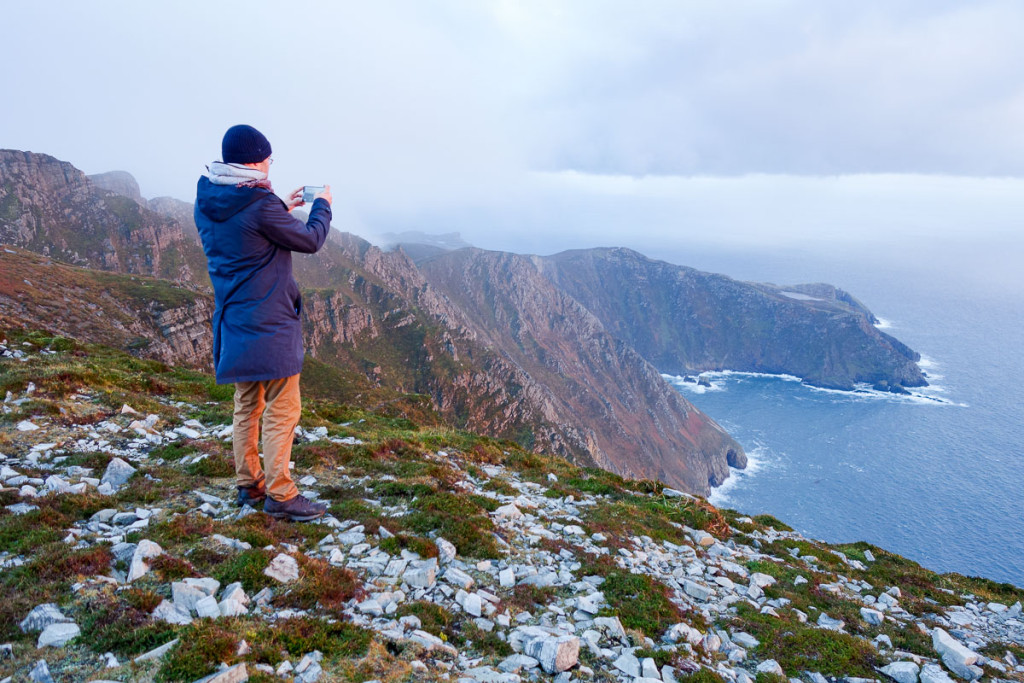 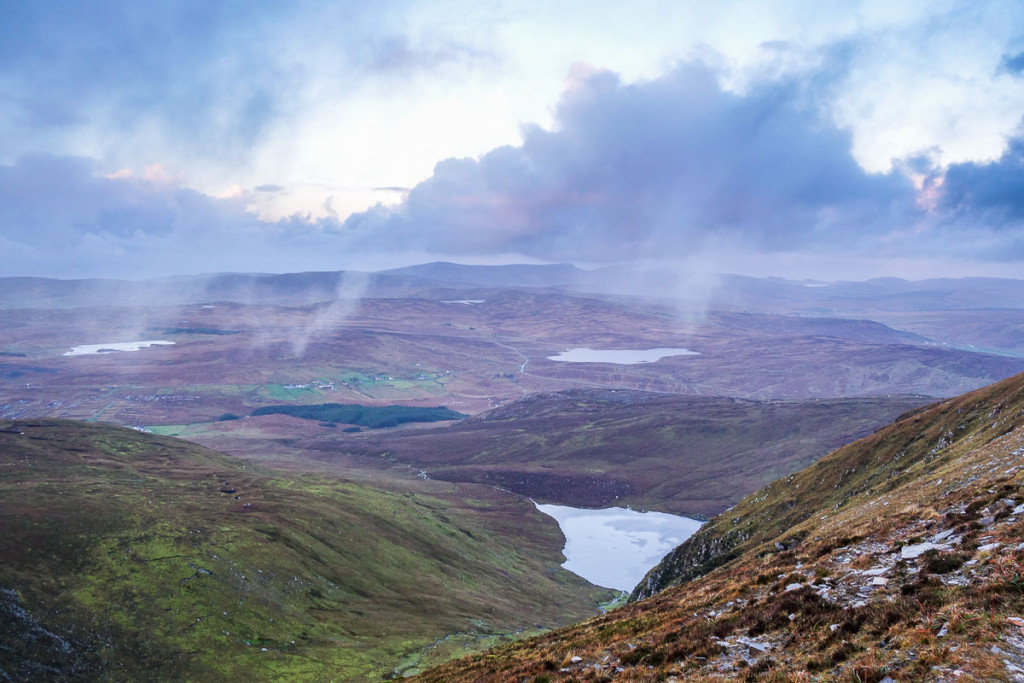 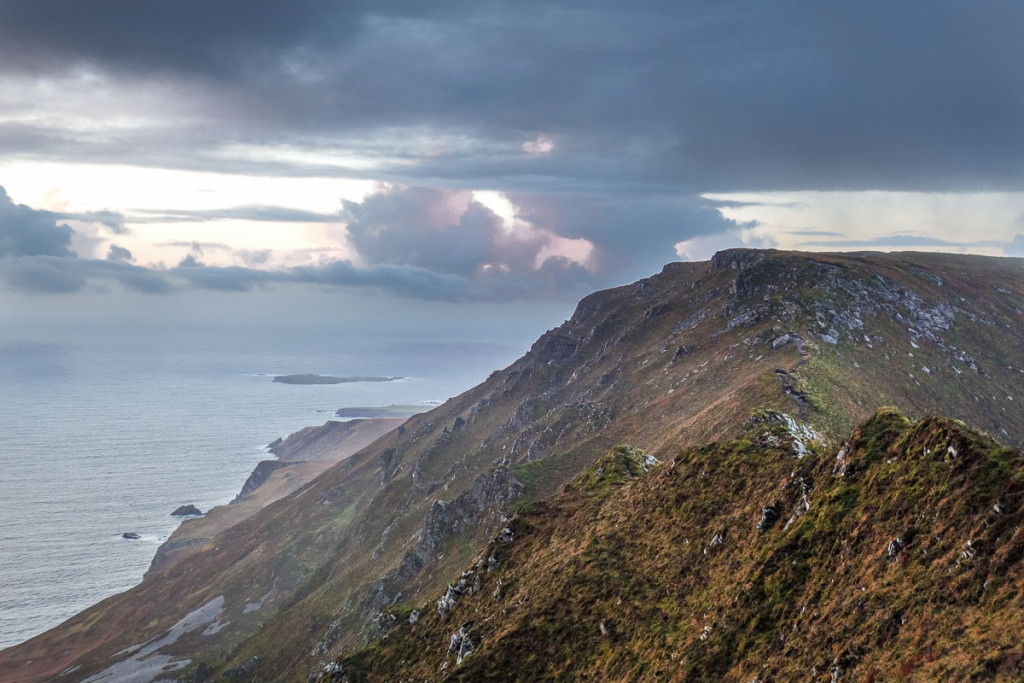 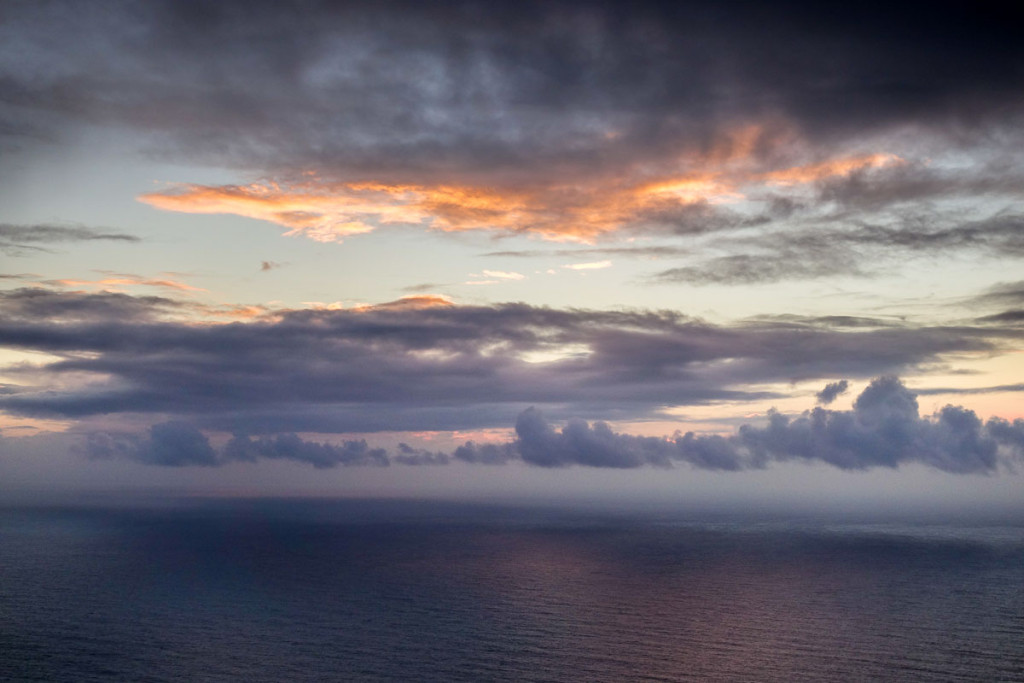 At the very top of the mountain, wet through and shivering but still in high spirits from the spectacular panorama, our thoughts turned once again, mysteriously, to the topic of whiskey, and how well a dram or three would go down just now. Must be something in the Irish air…

In all, our trek was… transcendent. I totally recommend it to anyone who’s ever in Ireland with a day to spare – and who’s quite fit.

Once back down the mountain again, we headed back towards Dublin in the car along country lanes. They’re probably a quarter the width of roads we’re used to, and there are mostly tall hedges to either side so visibility gets reduced to about five meters in places as the lanes are always bending sharp left or right. Dealing with oncoming cars on these roads takes some getting used to – and the skills of an acrobat. And dealing with oncoming buses or trucks – add the skills of a regular meditator (to keep reasonably calm and collected and NOT PANIC!!).

Along our way we briefly drove into Northern Ireland (UK territory). No border guards or anything – just a sign ‘Welcome to the UK’ – or ‘Great Britain’, or something like that. And then ‘Welcome to Ireland’ going back. It’s a shame it was dark, otherwise I’d have taken a photo. In this village the border goes through the middle of the river. You cross the bridge – you’re in another country!

The border’s a result of the Irish War of Independence. Hmmm, quite a history. Interesting, often sad, always instructive.

What else? Roads on the Irish side – really good, with bright markings and fresh asphalt. On the British side – noticeably more… modest. No comment ).

… Which winds up my Irish mini-series. Next up – tales from, not an island, but just the opposite, a landlocked European country – Austria!…