When folks who’ve been to Ireland get asked what its best ‘must-see’ or ‘must-do’ bits are (besides Guinness), most reply with the Cliffs of Moher, and understandably so. The Internet even says these cliffs recently became one of the top must-sees, not just of the whole of Ireland, but the whole of Europe! Bold reckonings. But they might just be right…

This part of Ireland is stunningly beautiful.

200-meter high sheer cliffs facing out across ‘the pond‘, aka – the Atlantic Ocean. Monumentally magnificent. And the waves way down below – like 50 floors of a skyscraper down below – can still be heard up here at the top crashing against the rocks. Them some powerful waves. 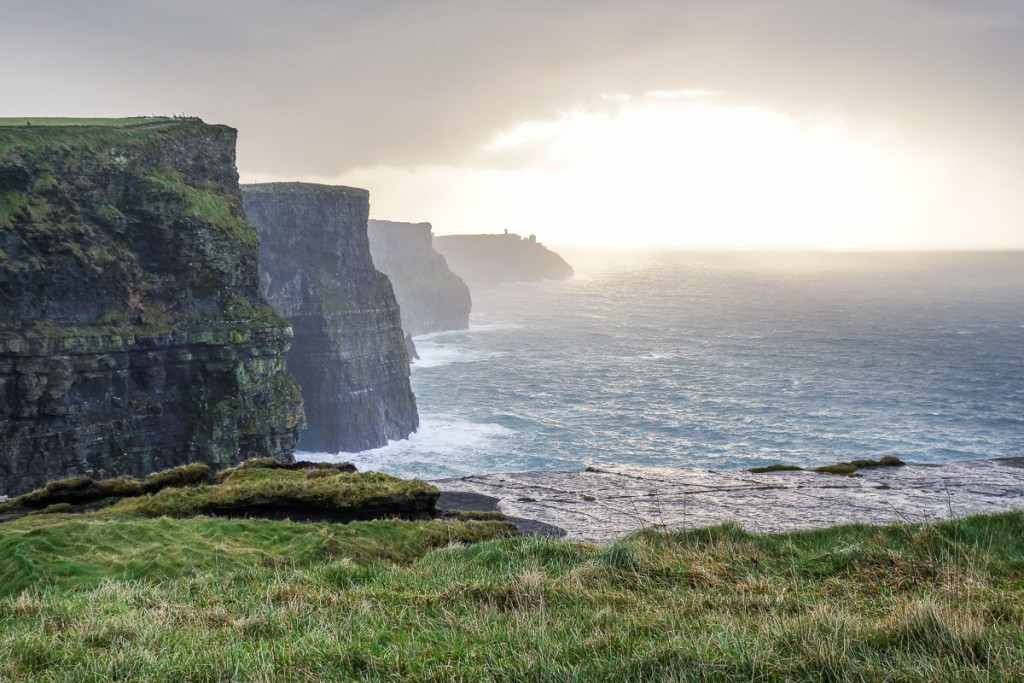 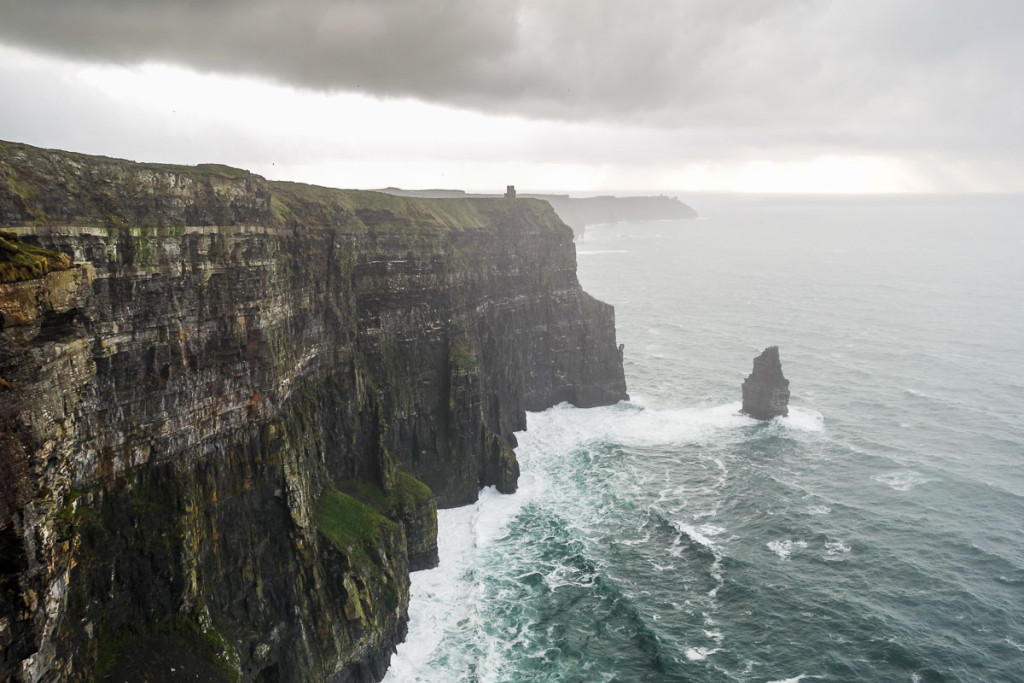 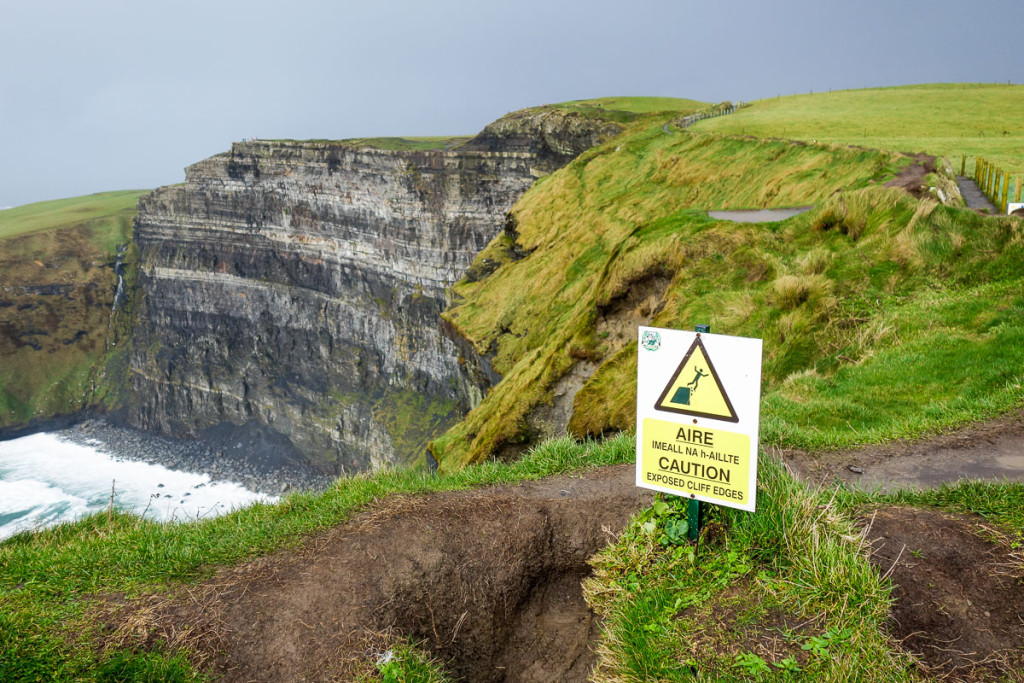 Cliffs of #Moher: 200m high breathtaking natural scenery, the pearl of #Ireland's sightseeing. And definitely a must see 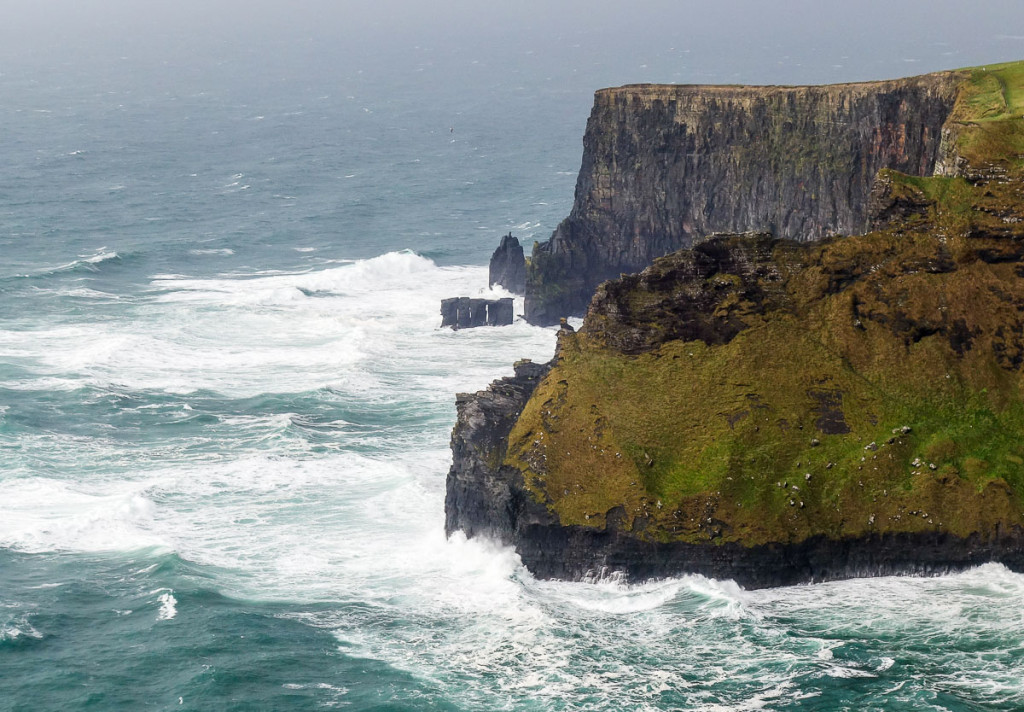 First you need to get to the cliffs.

The roads in this part of the country are thin and winding – quite normal for England, Wales, Scotland and Ireland. Some don’t like them, used to Roman-esque straightness; others love them – moi included. They take a bit of getting used to, but, like getting used to right-hand drive here, a bit of practice and you’ve cracked it.

Hardly ever see a rainbow? What about a double rainbow? Then get over here to Ireland! Due to it always raining somewhere nearby they’re real commonplace here. 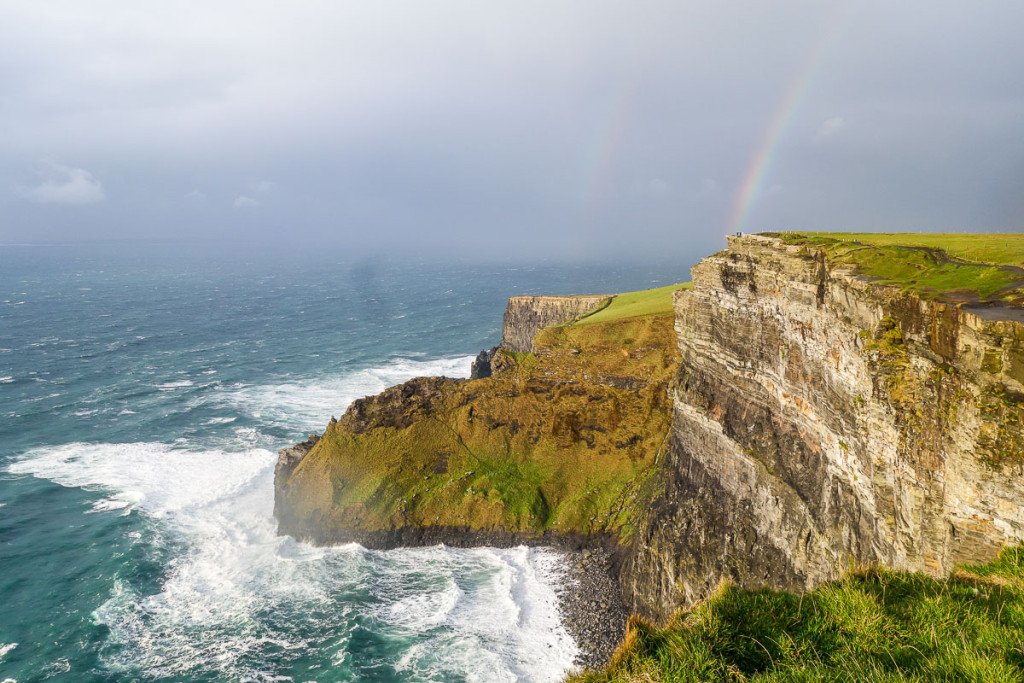 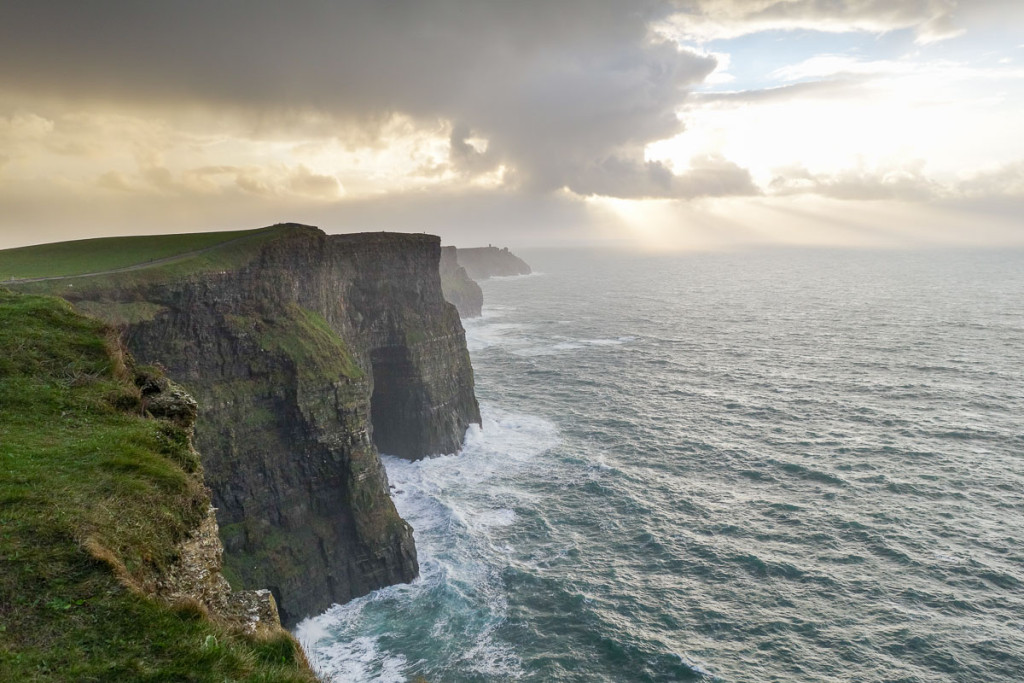 Incidentally, my travel companion A.B. tells me that local folklore says there’s a pot of gold at the end of every rainbow. Rich pickings here, then! Er, but there’s no such thing as the end of a rainbow: you get up close – it disappears!

We came across a row of shops here using Hobbit technology to protect them from the elements: 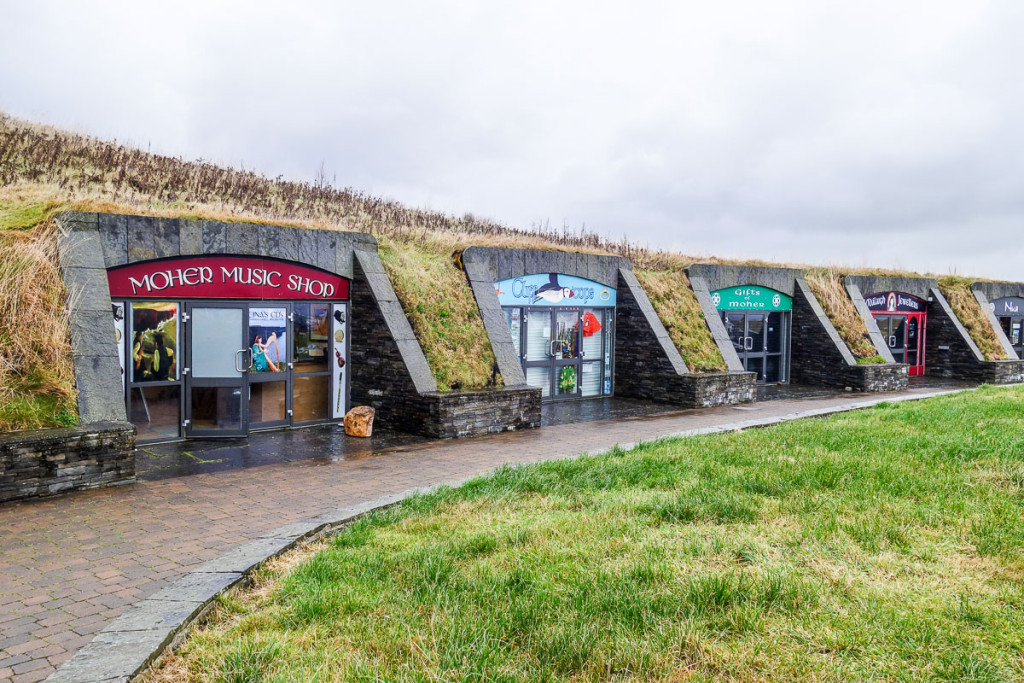 The weather here in November is, to put it mildly, wearisome…

A wind blows, incredibly, from all sides. In some places you can be standing there and a strong gust of wind suddenly blasts you, only to disappear again soon after, leaving a bizarre vacuum-like calm, then 10 meters away that same fierce wind is literally rooting up clumps of grass and sending water from puddles shooting up into the sky. Crikey!

Half the time it’s raining cats and dogs. It wouldn’t be so bad if it wasn’t for the accompanying wind blowing the rain all over the place – including in yer face. Occasionally the sun peeps through the clouds for a brief time (>rainbows) only to disappear again shortly after.

When it’s windy and rainy, approaching the tops of the cliffs is pretty crazy, so we waited a half-hour or so until it calmed down a bit. Even then it takes a bit of nerve to get right up to the edge. If you suffer from vertigo – forget it. Even if you don’t you might want to forget it. 200m down – the queasiness hits you in the stomach. Eeeh, the conditions we have to work in sometimes :). 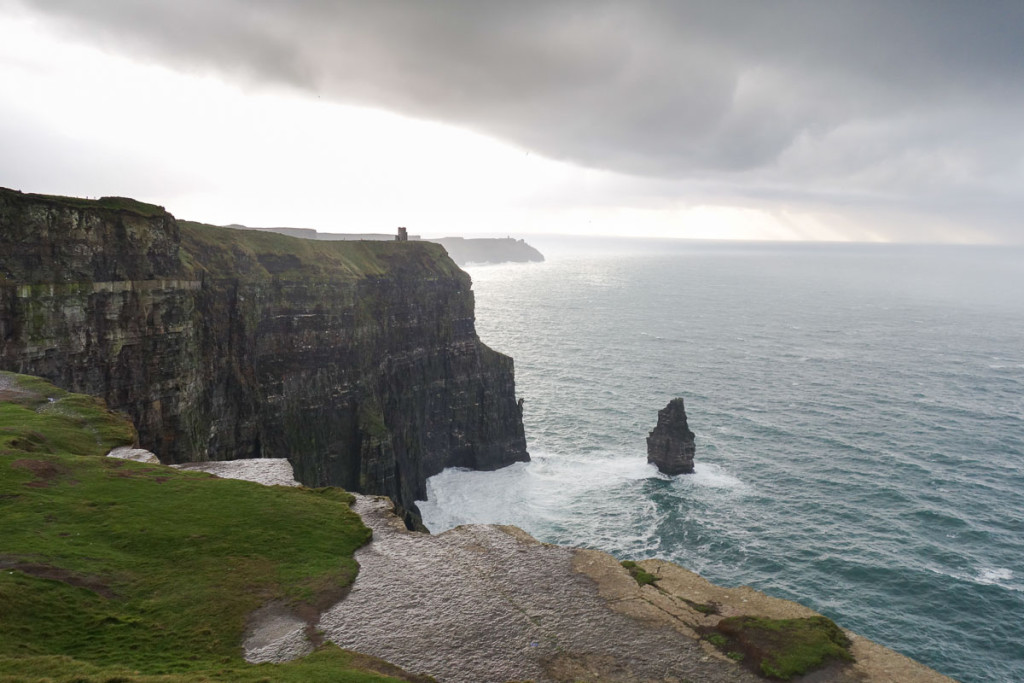 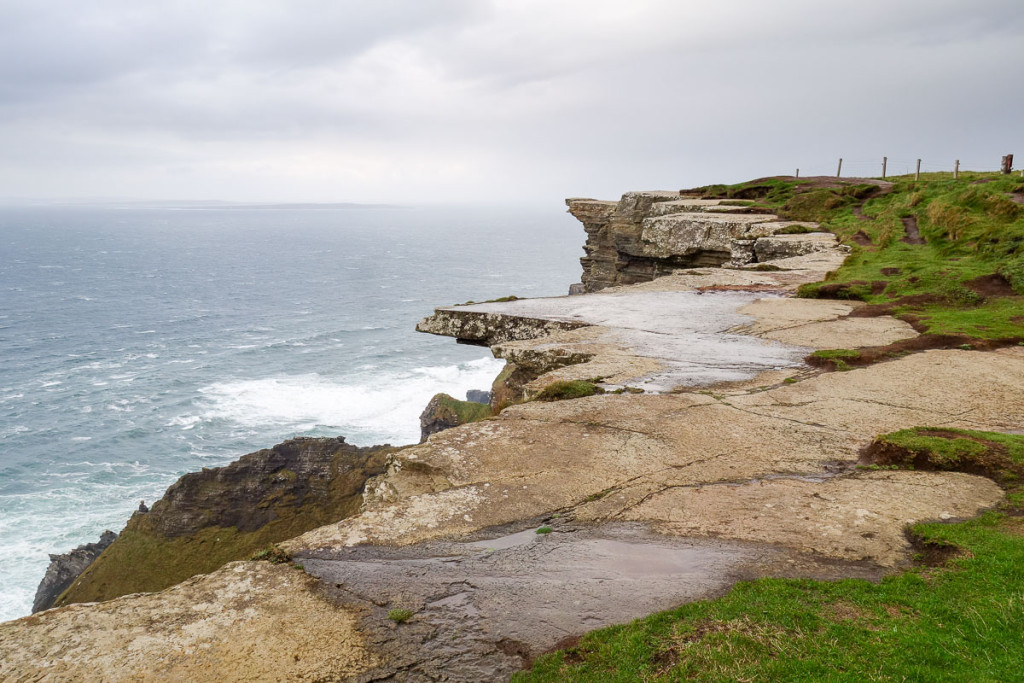 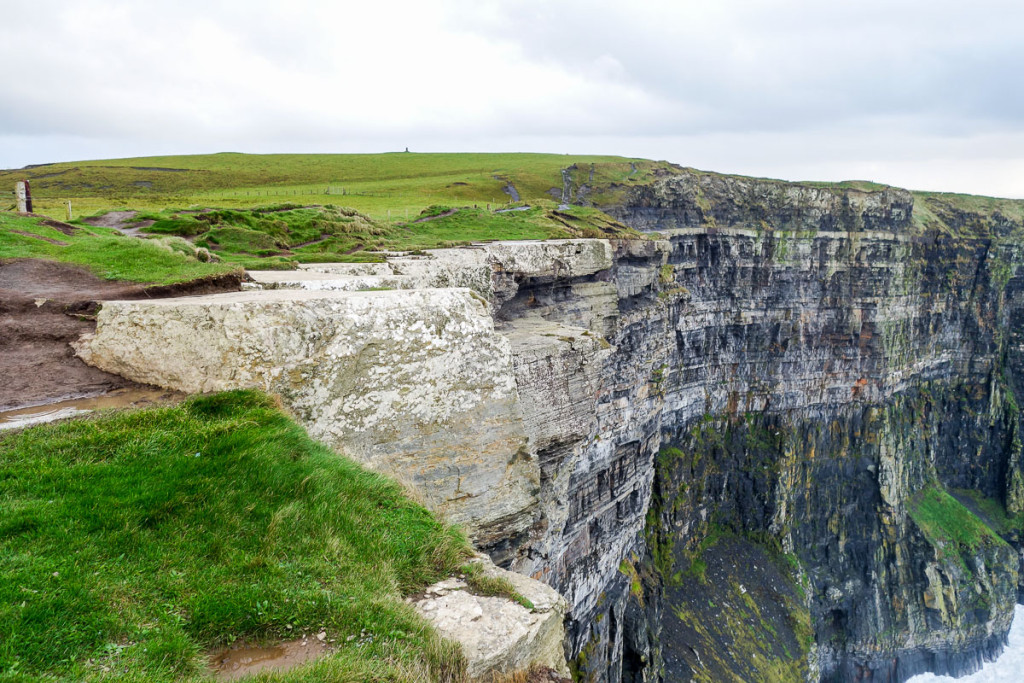 In the below pic you can see a truly unique phenomenon: a waterfall – going up!

The rain creates pools and streams, whose water naturally heads downwards – off the cliff tops and to the rocks below. However, the wind is so fearsome that the water gets blown back up the cliffs and spurts out at the top in a few places, transforming it from waterfall to natural fountain! 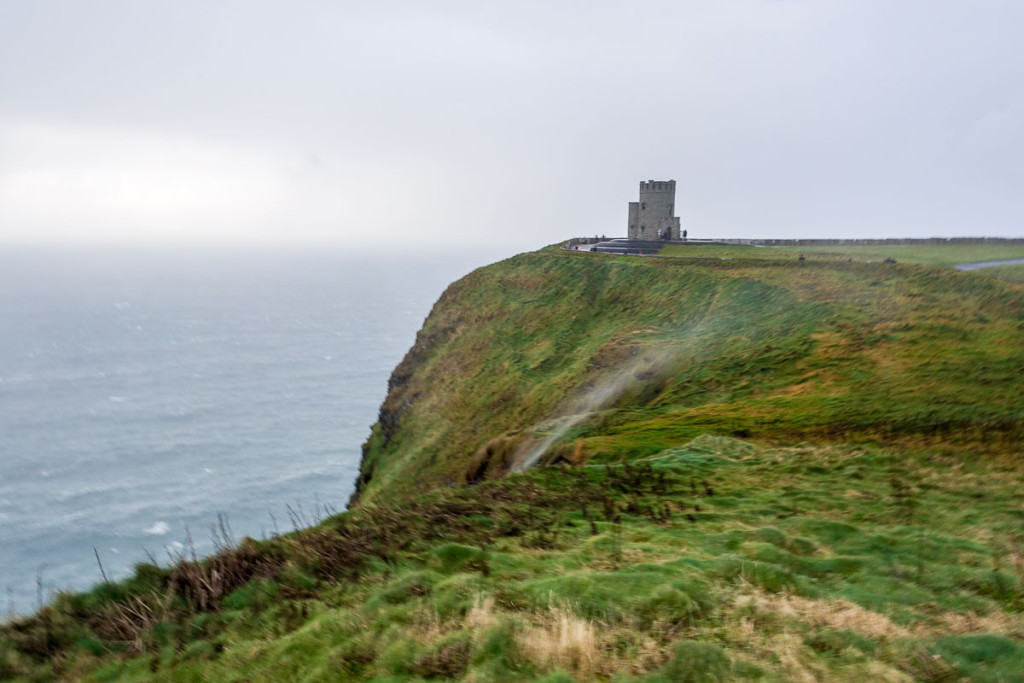 Here’s how it looks in real time:

Another astonishing fact about these cliffs, this one a lot less fun: they’re a top spot for folks offing themselves – throwing themselves off them. Indeed ‘Call the Samaritans’ signs are dotted all over the tops. Macabre.

The fields by the tops of the cliffs are all Atom Heart Mother. The cows roam freely about while the fences ‘stopping’ them getting too near the edge only just make the grade of ‘fence’. Courageous Celtic cows!

Incidentally, I mention the seminal concept album from 1970 because Pink Floyd is what we had on on the stereo in the car all the time. 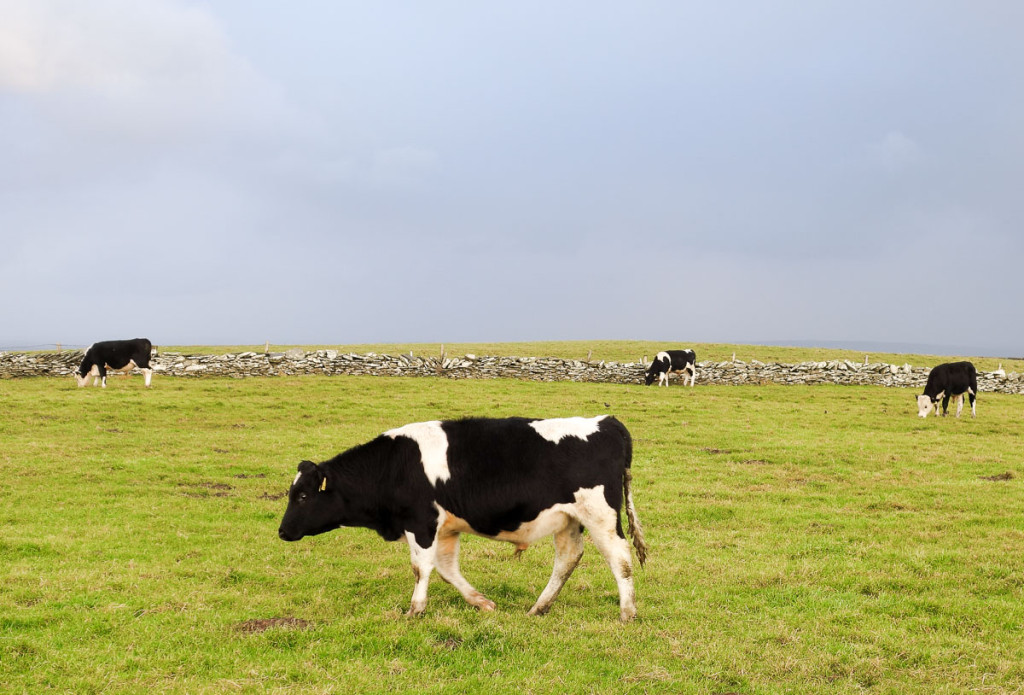 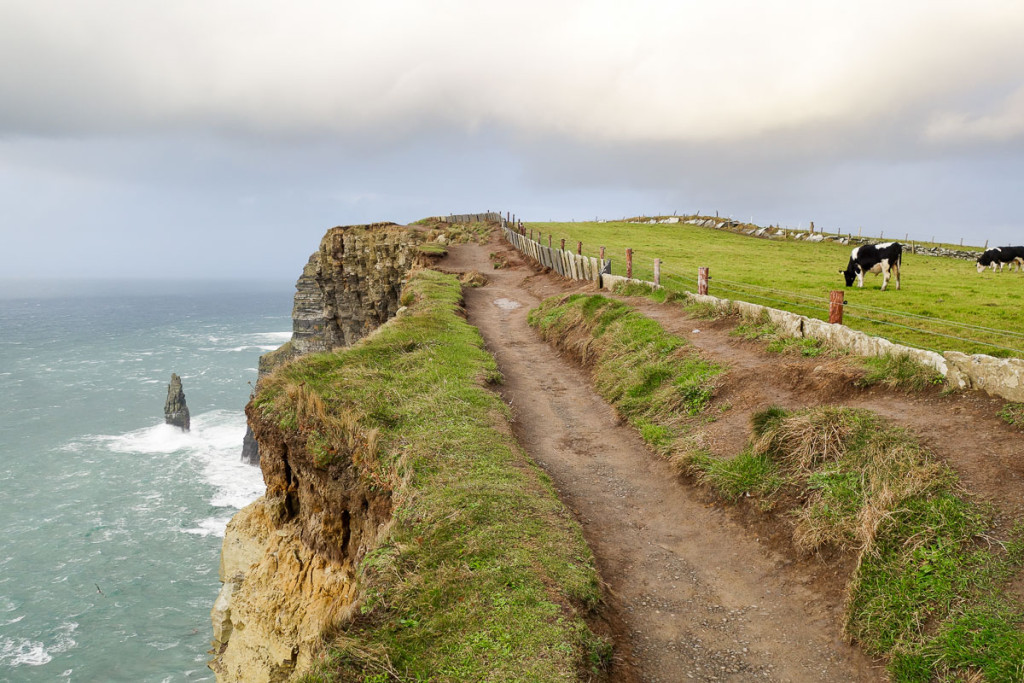 Given the climatic conditions, it looks like the dandelions here will mature only around Christmas. 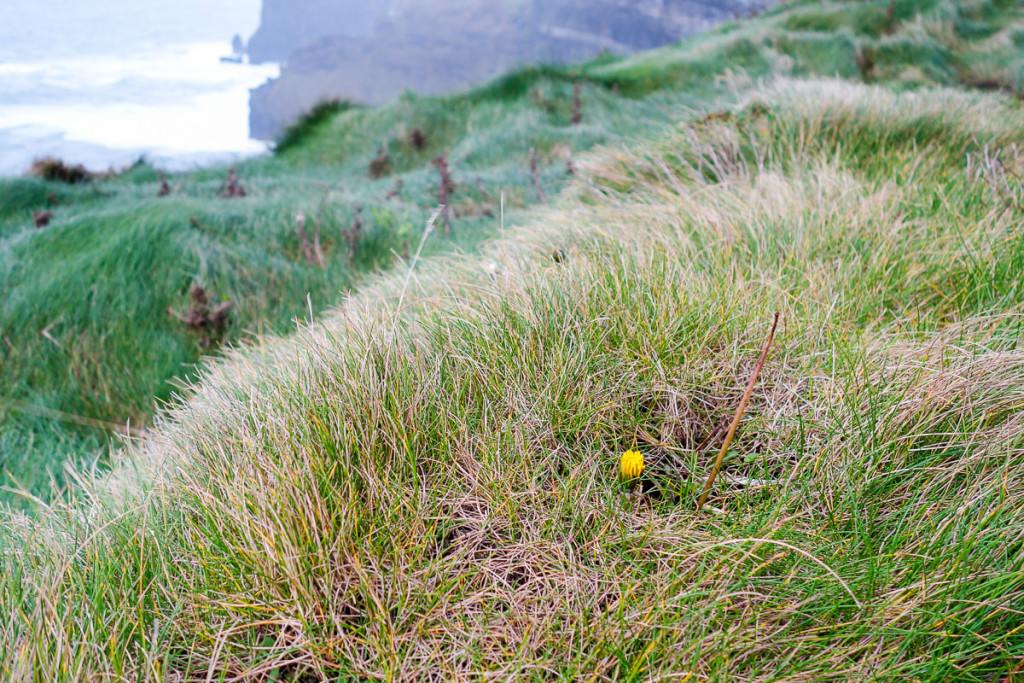 Looking at these photos I’m getting that queasiness again in the pit of my stomach. Did we really get so close to the edge? 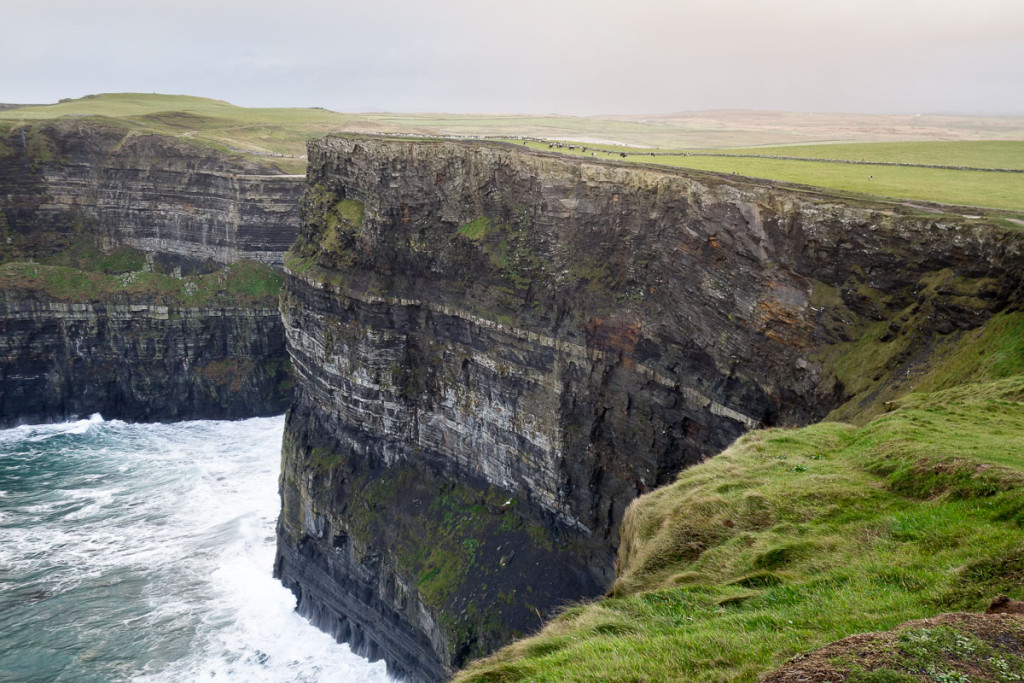 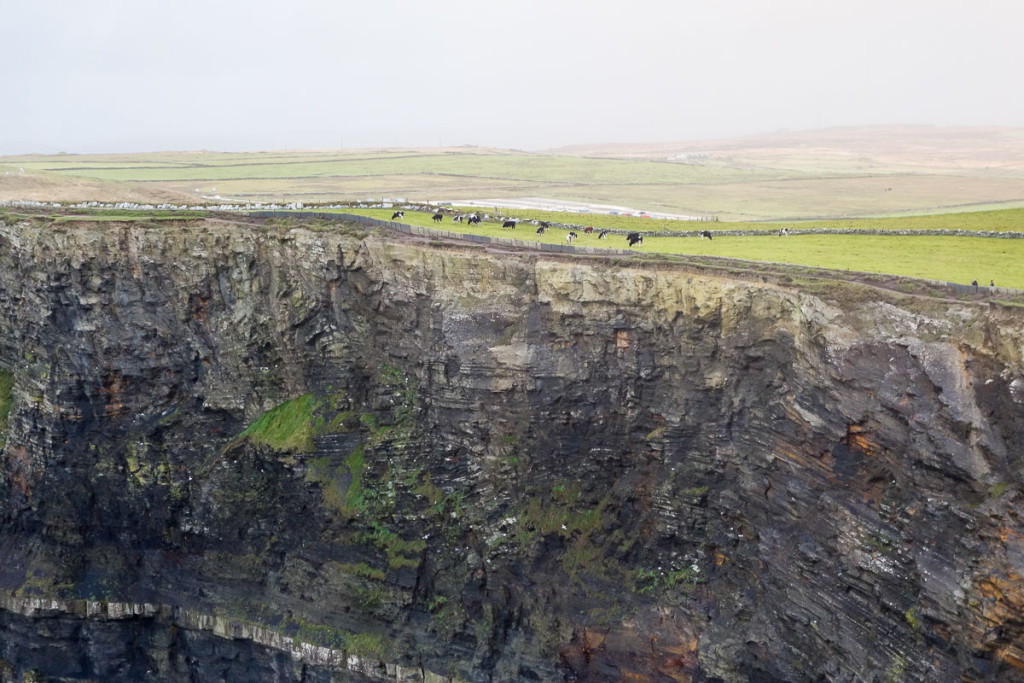 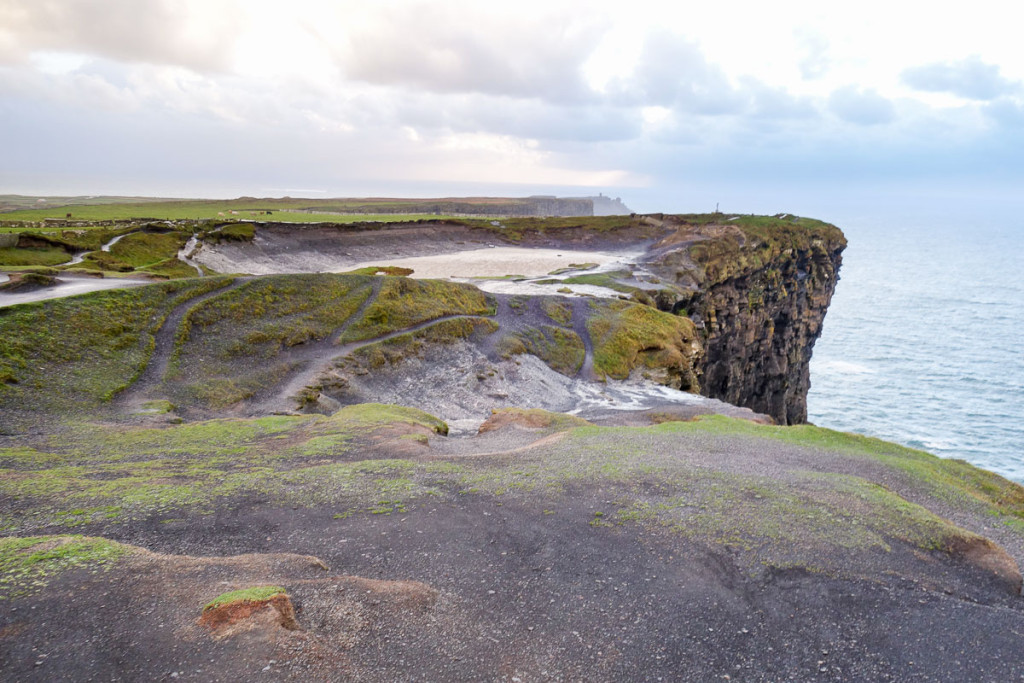 If only we could have gotten in a sunset here. Alas, the weather rarely permits one worth waiting around for. There was a mini-sunset somewhere in the distance, but before you could say Fat Old Sun it had disappeared. 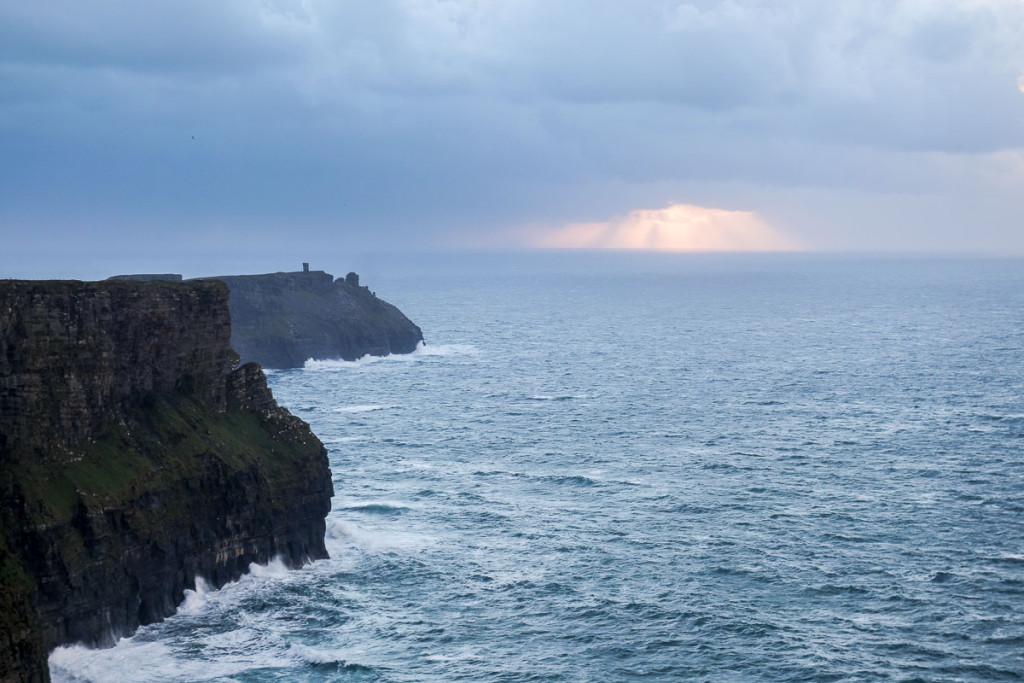 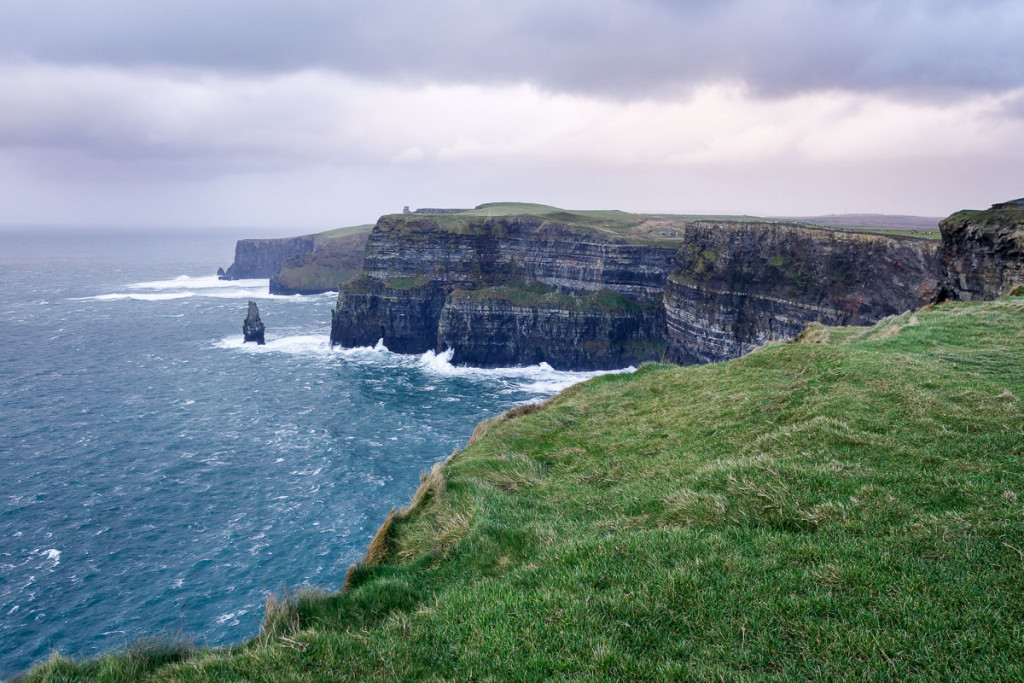 Well that’s about it about Moher and Mother. The sun went down, night fell, show over. And off we sped, to the experimental sounds of Alan’s Psychedelic Breakfast in our rented BMW :).