The new version of KIS is attracting quite a bit of buzz in the media: in the two weeks since its global premiere it has been receiving gushing review after gushing review. Just about all of them go into plenty of detail covering all the ins and outs of the product, and specific features have been covered here on this blog of mine – for example posts about automatic protection from vulnerabilities and making secure payments.

But KIS has one more delicious layer of features; however, they can’t be used yet, and will only become applicable in the (nearest) future (we really mean it when we say Be Ready for What’s Next, you know!). These futuresque featuresques are undeservedly not getting the limelight. I’m talking about KIS support for Windows 8.

So what are these technologies, how do they fit in with Win8, and what are the benefits for users?

I’ll start with the most obvious: the new Windows 8 interface. I haven’t had a test-drive myself, but I’ve heard lots of good things about it and read flattering reviews. The fully redesigned interface is really not bad looking at all, and that goes for the desktop version and the tablet-touchscreen-mobile incarnation. I’m looking forward to its release and the reactions of users…

At the same time it has to be said that this new kid on the block has significantly increased the proverbial pain in the neck for third-party software developers: in order to cater to the whole spectrum of user preferences it was deemed necessary to have two interfaces – the classic one we’re all used to, and the new go-faster-stripes one. In response, we’ve been one of the first in the antivirus industry to develop a special application that transfers the antivirus management features to the new Windows 8 interface. The application is free of charge, and you can download and install it from the Windows Store. 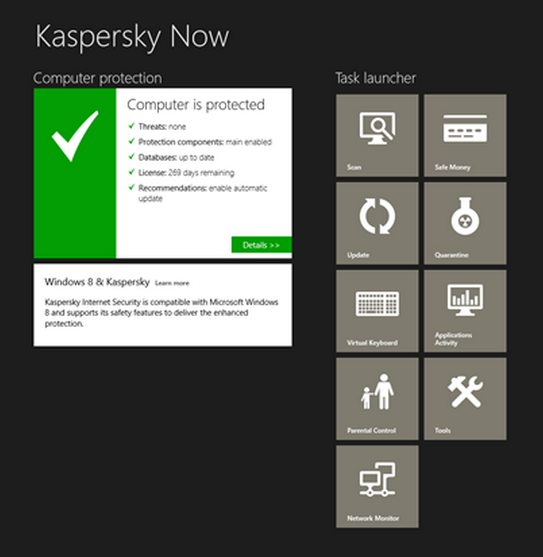 Incidentally, it’ll be interesting to get your opinion on the new Win8 interface:

But integration with Win8 doesn’t stop there. Ahead lies the most tricky (for us), but the most useful (for users) from the point of view of security…

We also enable seamless interaction with the operating system to determine the status of installed applications. Under a new concept there are four statuses: operating normally, having an invalid license, modified, and tampered with. Of course, antivirus products should deal with the latter, but for optimal results AV needs to be able to correctly interact with Windows in order to reinstall applications.

And last but not least, KIS is integrated with Microsoft’s Early Launch Anti-Malware (ELAM) and also its Measured Boot. In essence these represent an extra layer of protection against rootkits. With ELAM, a certified antivirus is granted the right to load into the operating system before all other applications; while with Measured Boot, detailed information about everything else that has been loaded into the operating system is delivered to the antivirus afterwards. As a result we have new capabilities not only for detecting the most sophisticated and crafty malware, but also for treating active infections. And this new, integrated application-loading approach affects system performance hardly at all: the driver loads in milliseconds.

It’s begging to be asked (again): since Windows comes with Microsoft Windows Defender as part and parcel of the operating system – is a third-party antivirus really needed? I must have heard this a thousand times. It has long been discussed, and answered!

Briefly here, Defender is the reasonable response of Microsoft to public pressure. By including it in its OS, Microsoft is able to provide users with a basic, minimal level of protection for those who are unfamiliar with the rules of computer hygiene and who might not have yet latched onto the idea of having dedicated antivirus software from true experts whose whole expertise is focused on security. And it’s not just me saying this. The guys in Redmond say it themselves: “We believe that all Windows 8 users should be protected by traditional antimalware software that provides an effective, industry-recognized level of protection.”

In terms of security, Microsoft has of late come on in leaps and bounds, and the upcoming new Windows is proof of this. But this isn’t just about the development of new concepts, special applications and technologies; it’s also about Microsoft’s open, high-quality interaction with the security community. Our guys are real happy with how they’ve set this up, got it running smoothly, and follow up with decisive action: regular conferences, seminars and documentation updates, plus rapid and exhaustive answers. It’s no wonder then that the eighth version of Windows hasn’t been released yet, but third-party antiviruses already support it!

Full details of support for Windows 8 in KIS can be found here (pdf). Please, note that some KIS localizations (for example for Spain, Italy and Nordics) will feature the Win8 compatibility later this month.