Here I am again in Tokyo’s Shibuya district, and I’m glad to be back.

First – how to pronounce the name: The first sound isn’t really a “sh” – it’s more of a cross between an “s” and a “sh” sound, of which there’s no equivalent in English.

Some of you will already know that the central Shibuya district in Tokyo is known for its liberality, or excess or “overdoing it” – depending on your particular outlook. Tokyo’s main shopping, eating, clubbing and entertainment center, the place is always rammed packed full of crowds rushing about to and fro, and it’s as brightly lit as Vegas’s Strip with bright hi-tech illuminated signs and huge video screens across building fronts. It’s the scene you normally conjure up in your head when someone mentions modern urban Japan – the one you get to see a lot in films, one noteworthy example being Lost in Translation. Yes, it’s neon lights, bustle and hustle, glamor and glitz all in one!

But I’ve only just arrived and, like Bill Murray’s character, I’m struggling with a generous helping of jetlag. Must get some shut-eye. Hope I get on better than he did!

Just before retiring to my bunk though, I managed to take a few pics. Like this one of soccer being played on a rooftop pitch! Now there’s a first! But let’s face it, where else are they gonna find the space for a soccer pitch – albeit a five-a-side one – in this metropolis? The footie players were about ten storeys up, I was 19 up. Good job they have nets all around and over the pitch – wouldn’t fancy fetching an errant ball from up there! 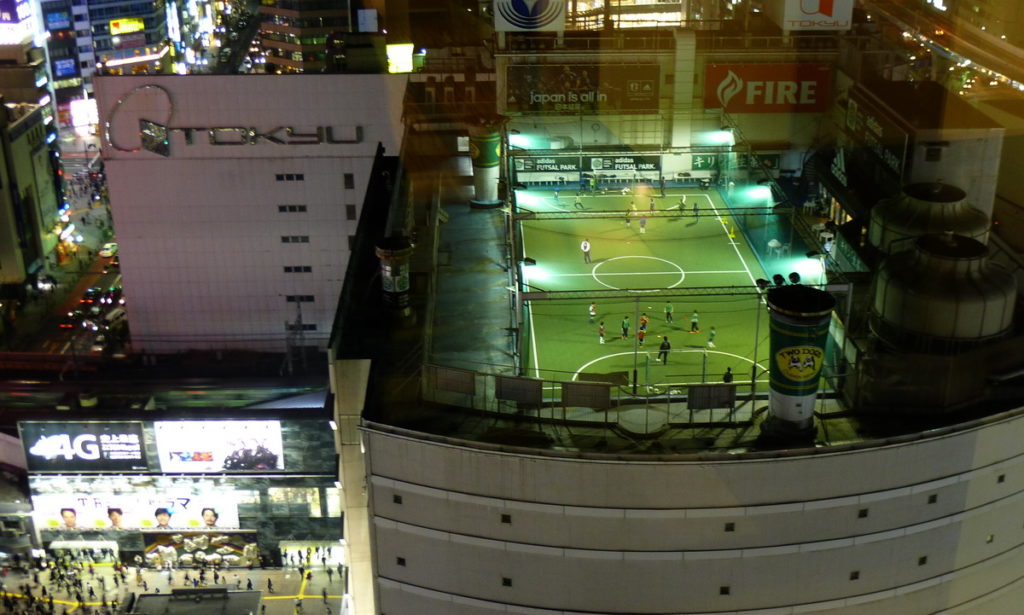 Early April – the cherry blossom season! This was something we missed the last time we were here in the fall. Still, I want to see it again…

It’s not just the lively and fashionable inner-city districts and cherry blossom I like. I’ve a soft spot for Japan on the whole as a country. In fact I think it’s one of the best places there is on the planet.

Tomorrow we’re off on a repeat stroll around the Tokyo Imperial Palace. I really liked what I saw there last time, but the grey skies back then spoiled the experience a bit. Later on of course there’ll be a bit of business – we’re organizing our annual conference for our Japanese partners.

// If anyone reading this lives in Tokyo – could you please advise where else we should check out to sate our cherry blossom fetish? The locals don’t seem to “get” my enthusiasm about these pretty perennials – they’ve been used to them since childhood; a bit like, say, maybe… Cubans and the sunshine; the French and… fresh baguettes; erm, the Americans and large portions; and, of course, Russians and (still today!) snow!

After Irkutsk, our next main stop was the large Siberian city of Krasnoyarsk. But since it’s a long way – 1100km – we broke the journey up, staying overnight in the town of Taishet, whose main claim to fame is that the Baikal-Amur Mainline (railroad) (BAM) starts out there. In Irkutsk we were up early, […]

Now, where was I? Ah yes, in Irkutsk! We had a full day in the city, combining business with pleasure: in the morning we headed over to see the good folks at the Irkut Corporation, and in the afternoon – museum visits! -> At Irkut we got to see the testing of the MC-21:

Onward we drove. And drove, and drove… on our Magadan–Moscow road trip. Today’s stretch – further along the Baikal Highway, heading for Irkutsk (not Yakutsk, though I’m sure they get mixed up a lot:). The road is smooth and mostly straight (like most highways in this part of the world), the views all around – […]