Certainly the announcement was made in the Anonymous style, with the same digital voiceover; and it fits perfectly the sentiments of its previous announcements too.

On the flipside, there are some things that make me think this is not an official operation:

1) The announcement came from social media accounts that have never been used by Anonymous before. 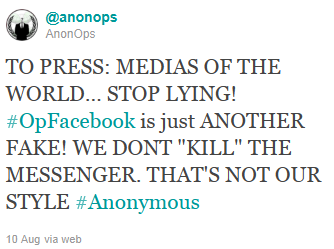 Just a few hours later it added that the op is being organized by “some Anons” and that not all of Anonymous agrees with the op.

And last but not least, the text version of the message allegedly from Anonymous about the Nov 5 op leads to websites containing advertisements.

Clearly there is no precise answer to the question in the title of this post. We may experience some attacks on Facebook – but not on the scale the original announcement says. But then there is the chance that the announcement is fake and simply trying to create a footprint for some revenue.

What do you reckon?