The other week a group of colleagues and I were up in St. Petersburg on business. And in among our busy schedule while there we paid a useful and informative visit to the Leningrad Nuclear Power Plant. And it was there I got my first glimpse of Cherenkov radiation (and you thought radiation was invisible?), which I’d dreamed of doing for years. I also stood on the roof of a working reactor of RBMK (Reaktor Bolshoy Moshchnosti Kanalniy, meaning ‘high-power channel-type reactor’). An unforgettable experience!

Note: since there’s absolutely no photography allowed at any nuclear facility, the photos below are all taken from the internet.

So, the main thing: Cherenkov radiation. In case you haven’t clicked the link, here’s what it says about it on its Wikipedia page: ‘Cherenkov radiation is electromagnetic radiation emitted when a charged particle (such as an electron) passes through a dielectric medium at a speed greater than the phase velocity (speed of propagation of a wave in a medium) of light in that medium’ (the links –added by me).

And you can actually see this wonder of physics – and beautiful it is too: a fluorescent blue in the core of a nuclear reactor in cooling fluid. The spectacle is a cosmically fantastic one…

(photos from Wikipedia and here)

Actually, the whole business trip north to Russia’s second-largest city was an interesting one. It went something like this:

1) We had a row with the staff of the Sofitel hotel in downtown St. P, who – wait for it, and remember, this is a HOTEL, a 5* one at that! – refused to serve us breakfast! And not just refused, but did so in full-on old-school primitive rude ‘service – what’s that?’ mode! Won’t be staying at a Sofitel again!

2) Meetings and a lecture at Saint Petersburg State University (amazing place, rich history [founded by Peter the Great in 1724], innovational, promising, and a lot more positivity besides [deserves a separate post];

3) An evening stroll around downtown St. Pete, ending up with an unexpectedly long sitting in an unexpectedly hospitable and friendly… Irish pub – Radio-Irlandiya! We didn’t want to leave!

But leave we had to – eventually. Just after we did: photo-op. And what a cool puddle-pic I took! -> 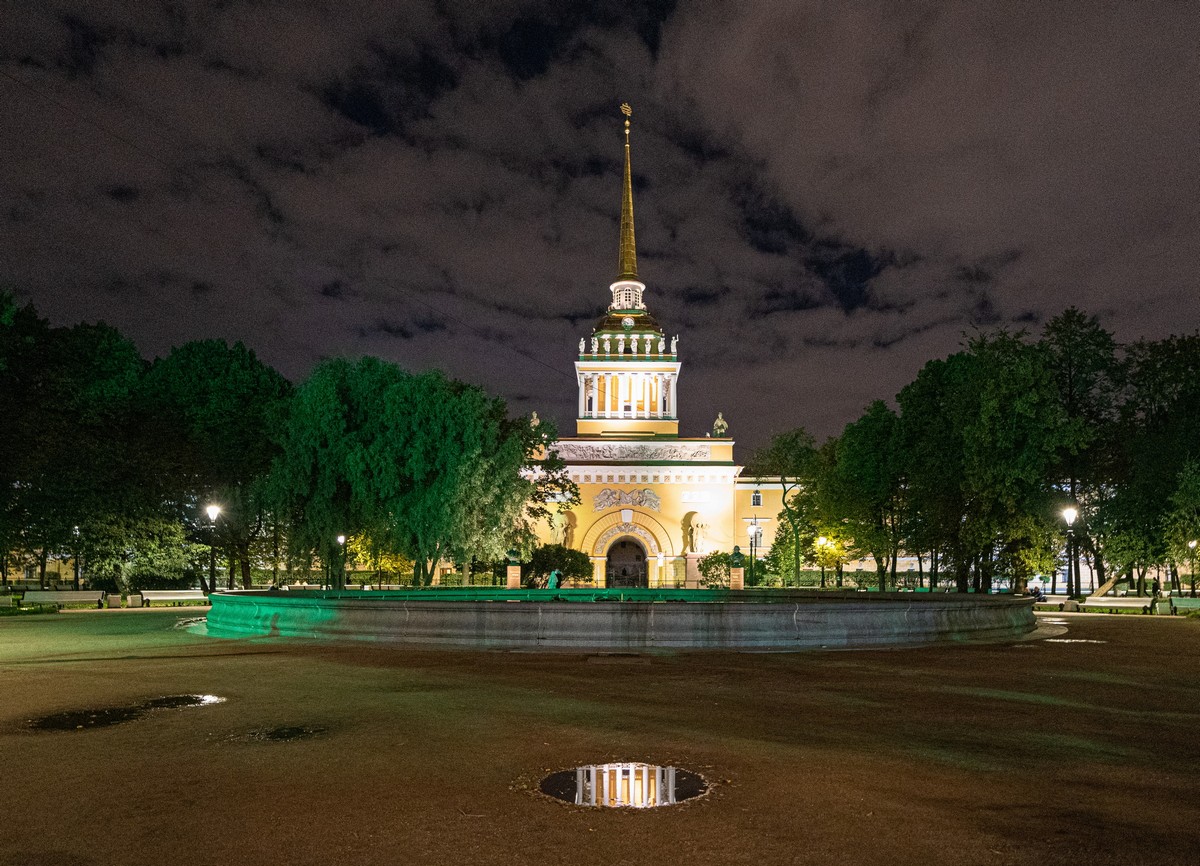 Ahhh. Saint Petersburg (a.k.a. [formerly] Leningrad, just in case your history isn’t a strongpoint:). Always nice to return to the ‘Window onto Europe’. All present and correct too: the Neva, the bridges, the canals, the classic Western European architecture, the imposing grandiose buildings along embankments. And all clean, smart, and with illuminations and cool spotlights everywhere:

In the distance – the Lakhta Center skyscraper, the tallest building in both Russia and Europe. I think it fits in nicely with the surroundings. Sure it’s modern, but I find it sufficiently subdued and modest and in good taste. Yet some folks are soooo against it. Eh? ).

And that’s all from the Venice of the North folks. Time to drive fly onward…