The time has come for the proverbial main course folks – the very reason for this whole mad winter Magadan–Yakutsk (and then cross-Russia) road trip: yep – the world’s coldest settlement: Oymyakon.

Picking up where we left off in the previous post – we turn off the main road and head toward Tomtor and Oymyakon. 150km to the former; a further 40km to the latter. Something like this: 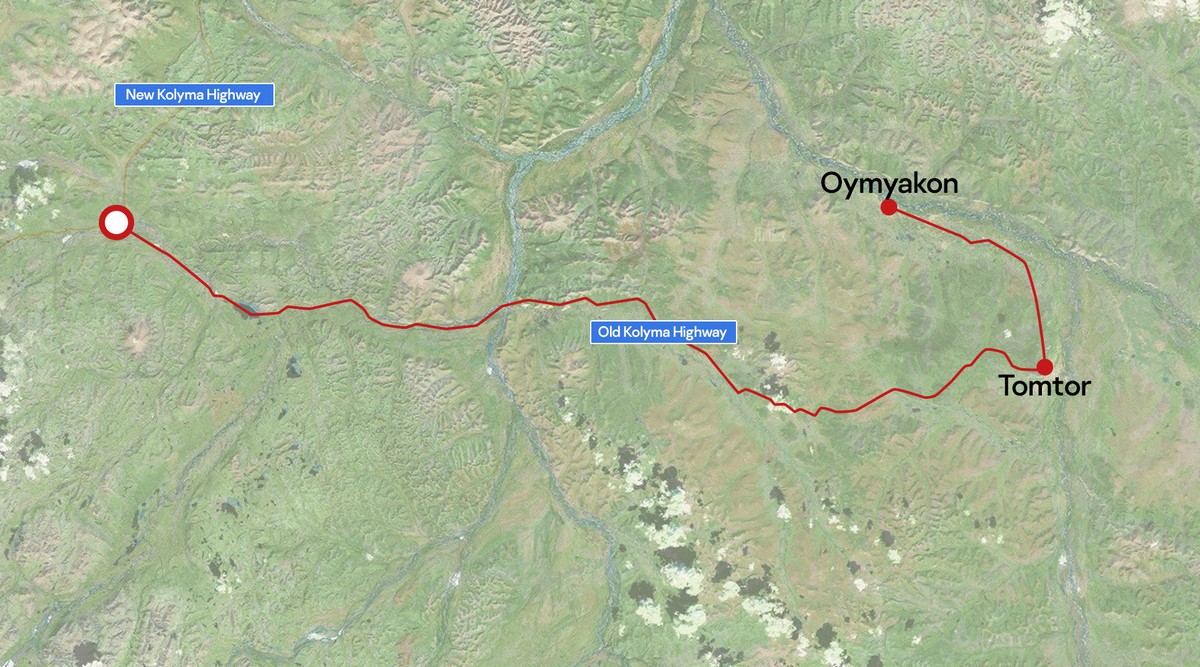 As you may be able to tell from that map (remove the highlighting on the route and you can hardly see the road!), it’s a very narrow minor road lane. But all the same – as per tradition around these parts – much of the snow had been cleared. The potholes were few and far between and the road surface was generally good, but best of all was that there were hardly any other cars on the road (just two or three on the way there).

Also as per tradition, OMG-white-winter scenery all around along the whole route. Absolutely gorgeous! -> 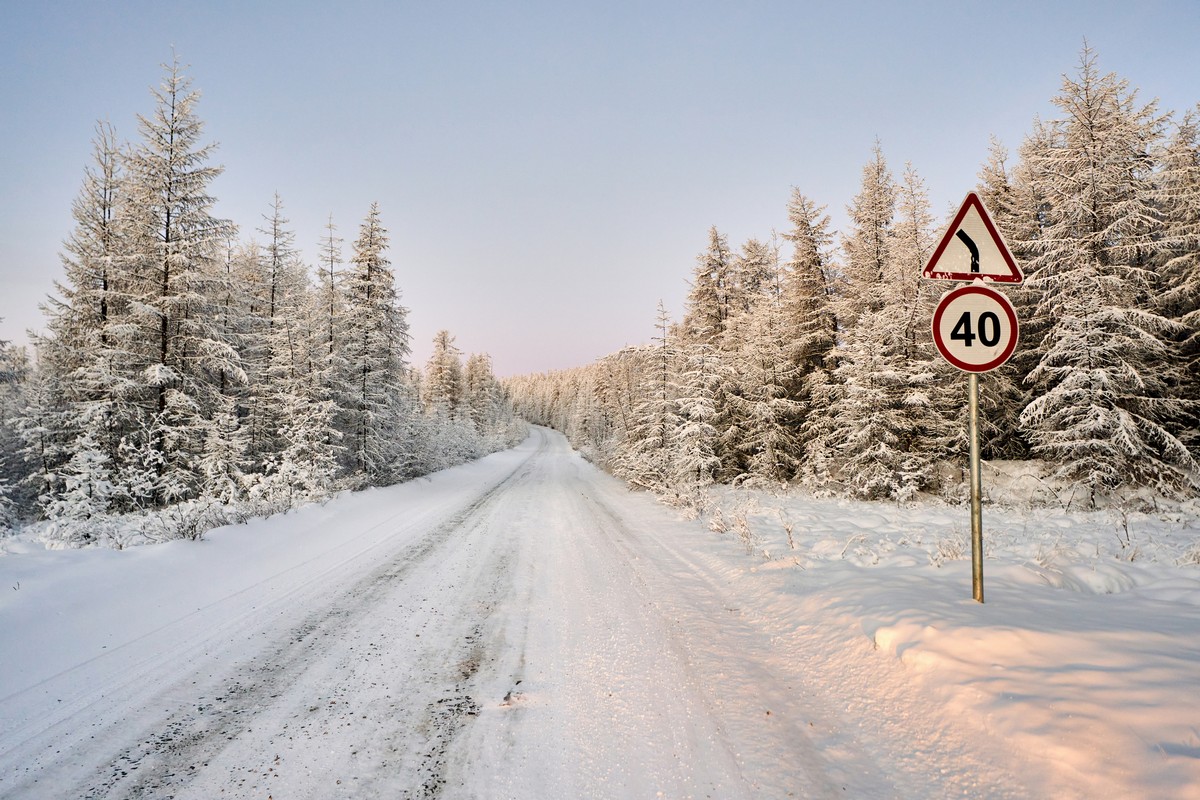 As you can see – cleared, smooth, clearly signposted. Mileposts too occasionally. And of course we stopped regularly for photo-shoots: 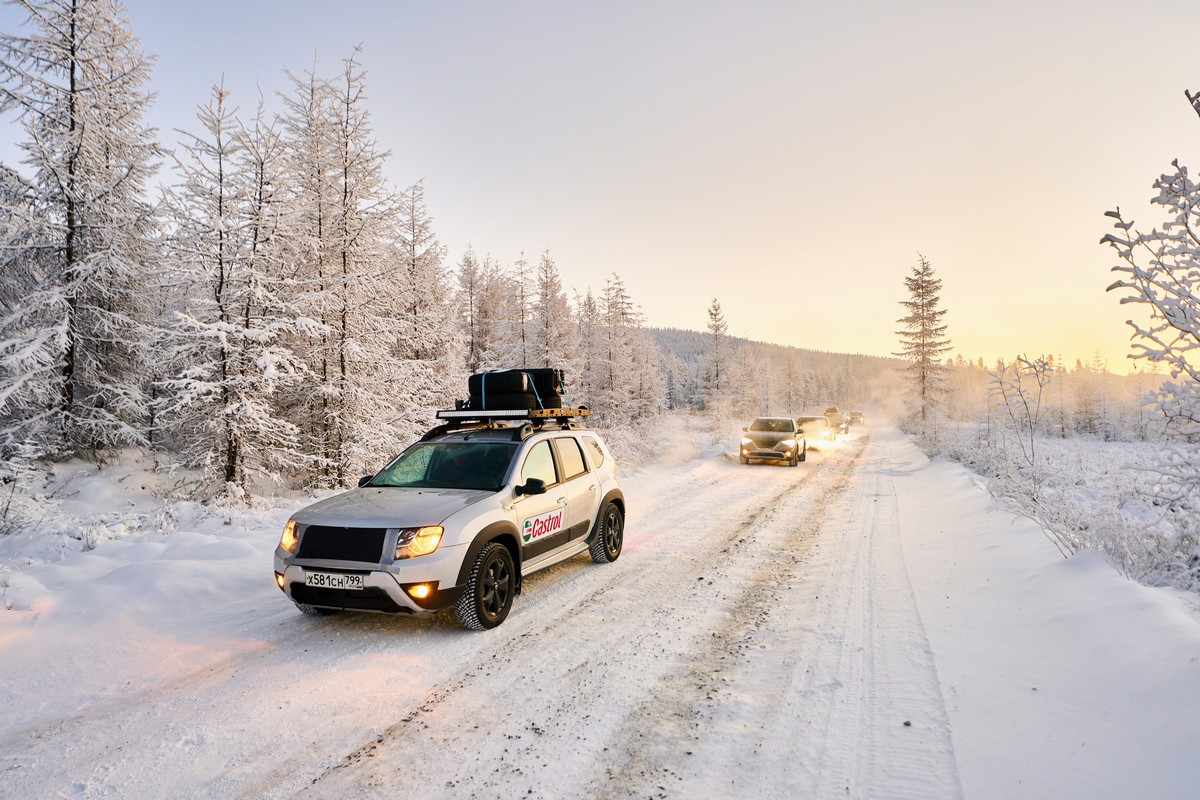 The road was so smooth a bit of multi-tasking proved possible: one hand on the wheel; the other – happy snapping! It’s not as if I could rely on my fellow traveler in the front passenger seat: he was too busy snapping away too! 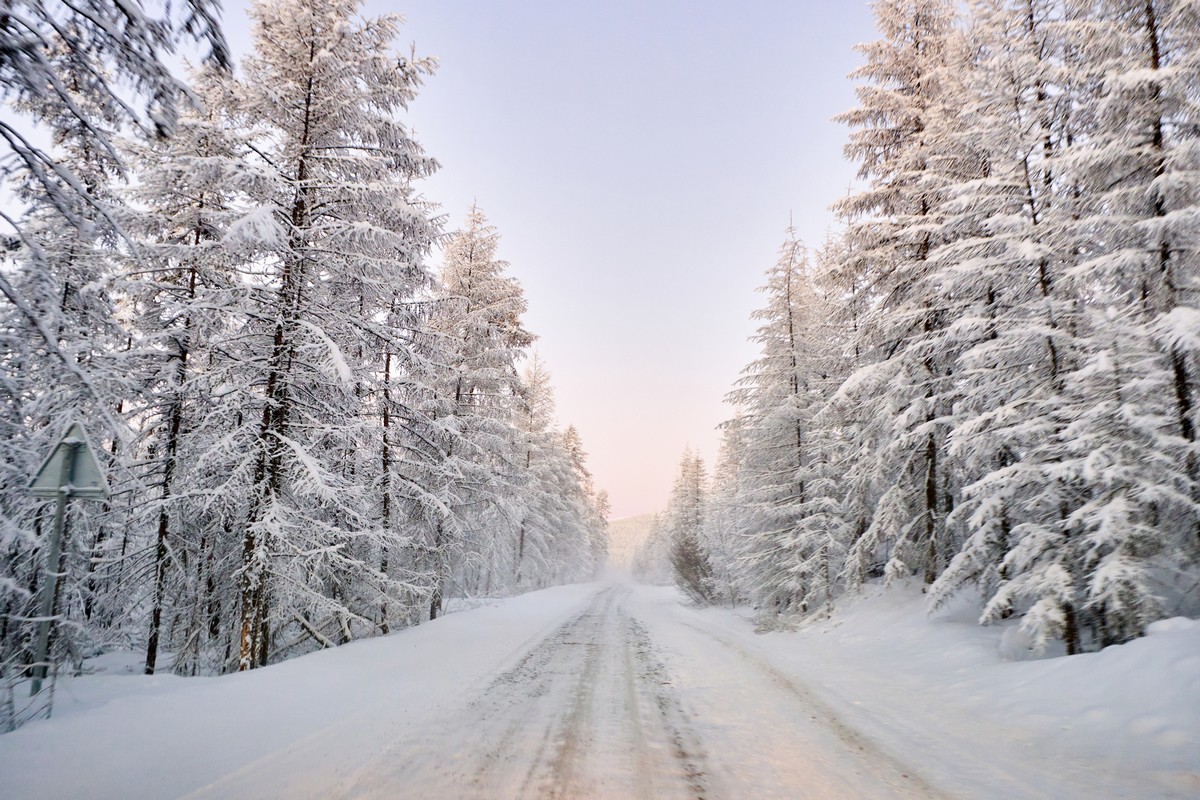 Btw: actually, these on-the-road pics were taken on the way back from Oymyakon. On the way there we were traveling after sundown. 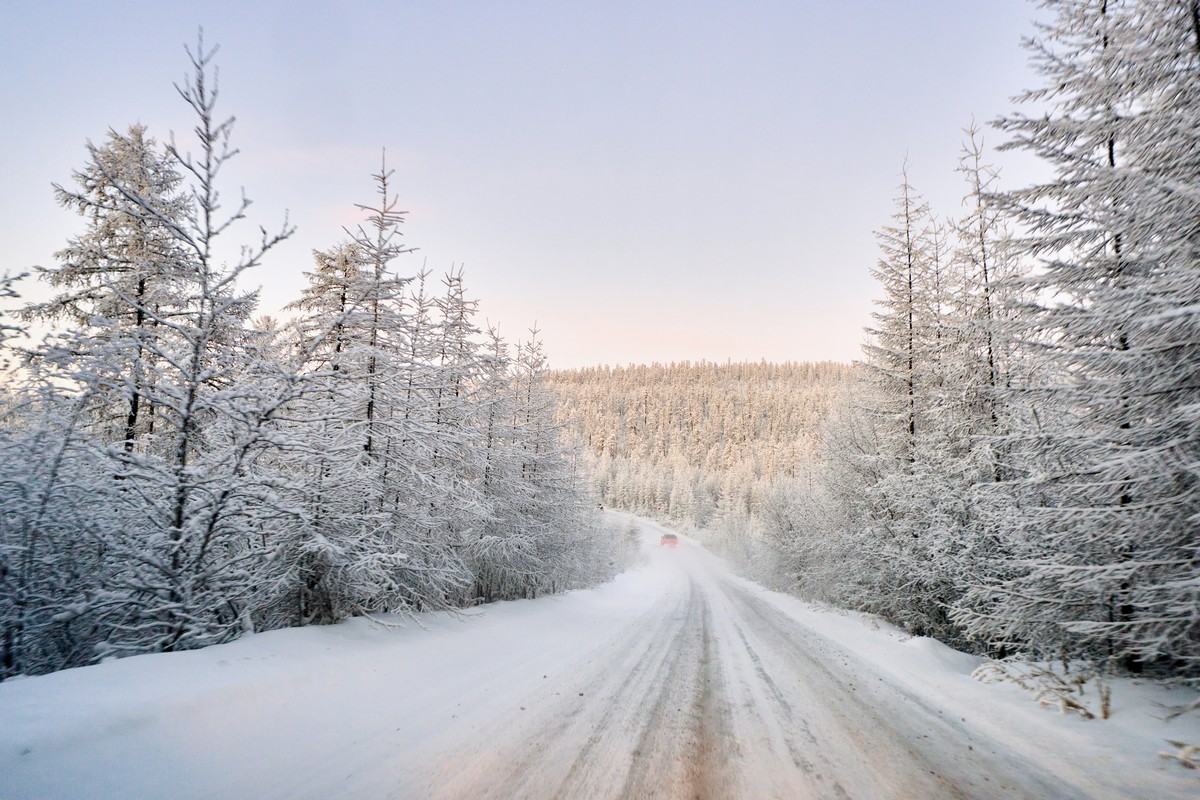 And that’s how we rolled for nearly 200km. Oh – only just noticed: check out those animal tracks there to the left of the road. I wonder what beast it was? Wish we’d got a glimpse… 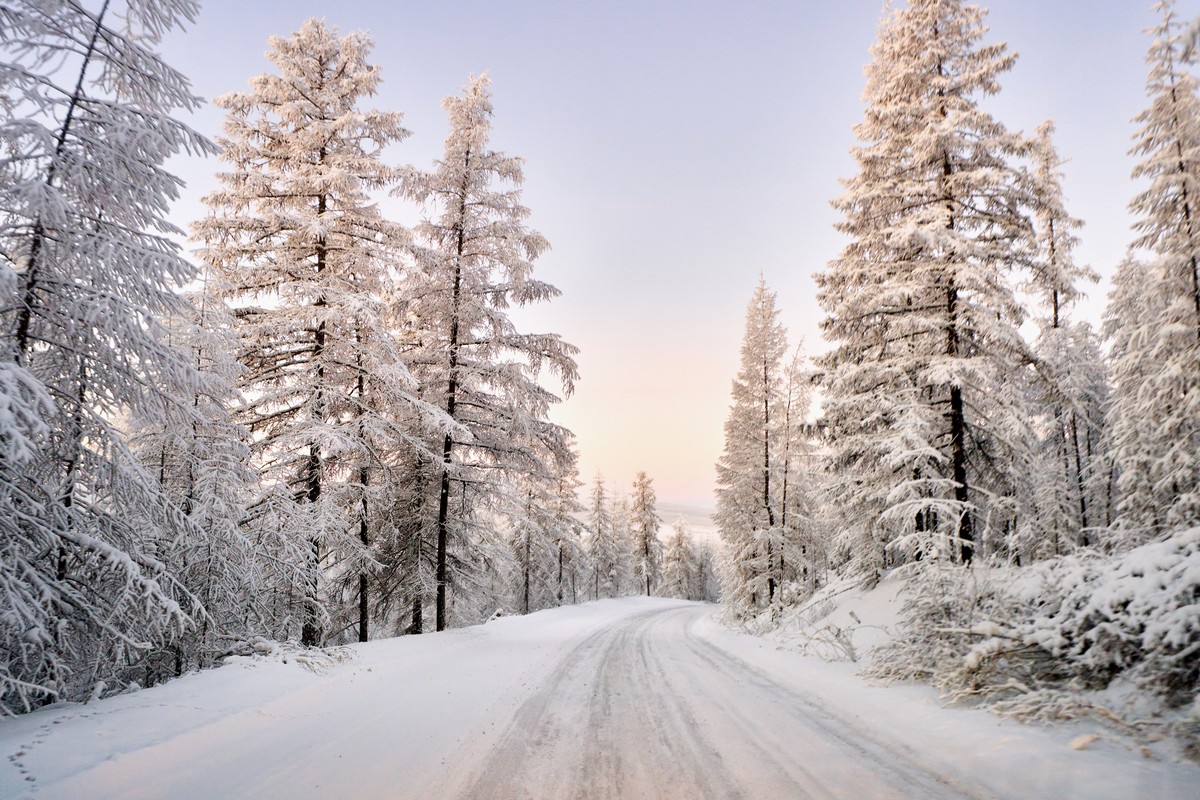 200km there; 200km back to the highway. The road lane track from Tomtor to Oymyakon was even narrower – single track all the way. Not that there was other traffic, so no real worries (alas – no pics of the track; all these pics are of the highway-to-Tomtor stretch). 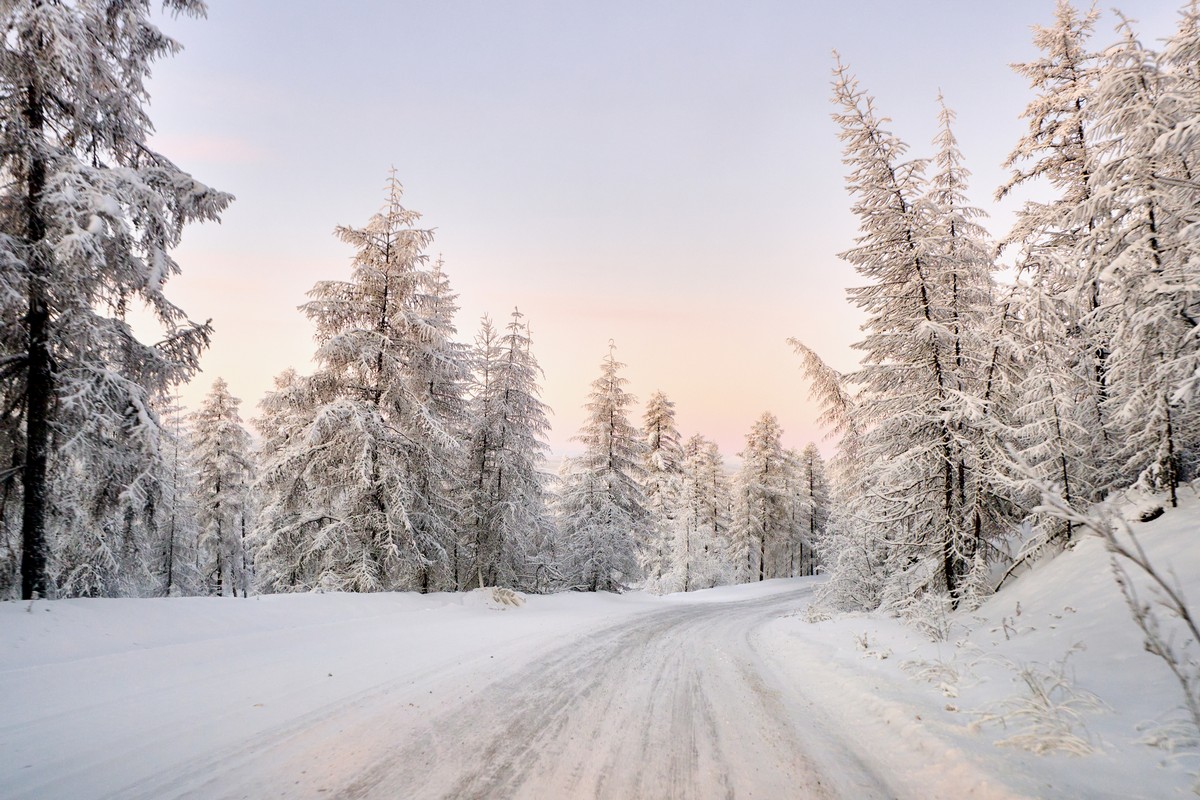 Dawn at the 101st kilometer marker:

Here’s a funny one: the word ‘Внимание‘ there in Russian means ‘Attention’ in English. At first glance you’d think it’s telling you – together with that sign with the arrows above it – to watch out for what’s coming up just ahead on the road. But then you notice that there ‘р.’ before the ‘Внимание‘. And that ‘p.‘ is the abbreviation for ‘река‘ – ‘river’. So, no need to pay attention to what’s coming up on the road after all. It turns out you only need pay attention to the fact that there actually exists in this world a river that goes by the name of ‘Attention‘! 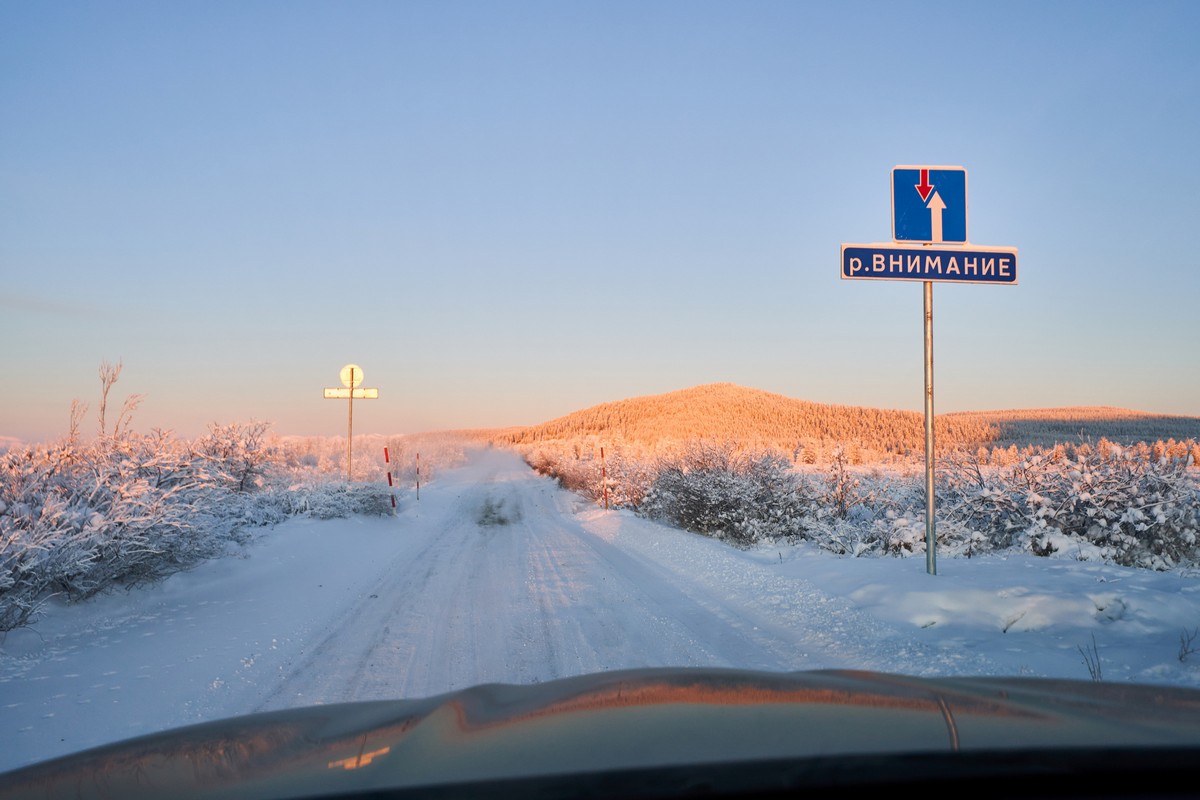 Like I’ve mentioned, on our way toward Oymyakon it was dark: first dusky evening time, then full-on pitch-black nighttime. I was driving, but also tried to make a mental note of all the very best spots that would need snapping on the return journey the day after tomorrow. Turns out – I could have done some snapping on the way there too (if I’d been able): my long-time, regular travel companion DZ didn’t let the dark conditions get in the way of taking some great shots, as you can see below. I really do need to have him show me how to take photos with hardly any light. Actually, no need: he’s tried before, and I still can’t crack it 😕. 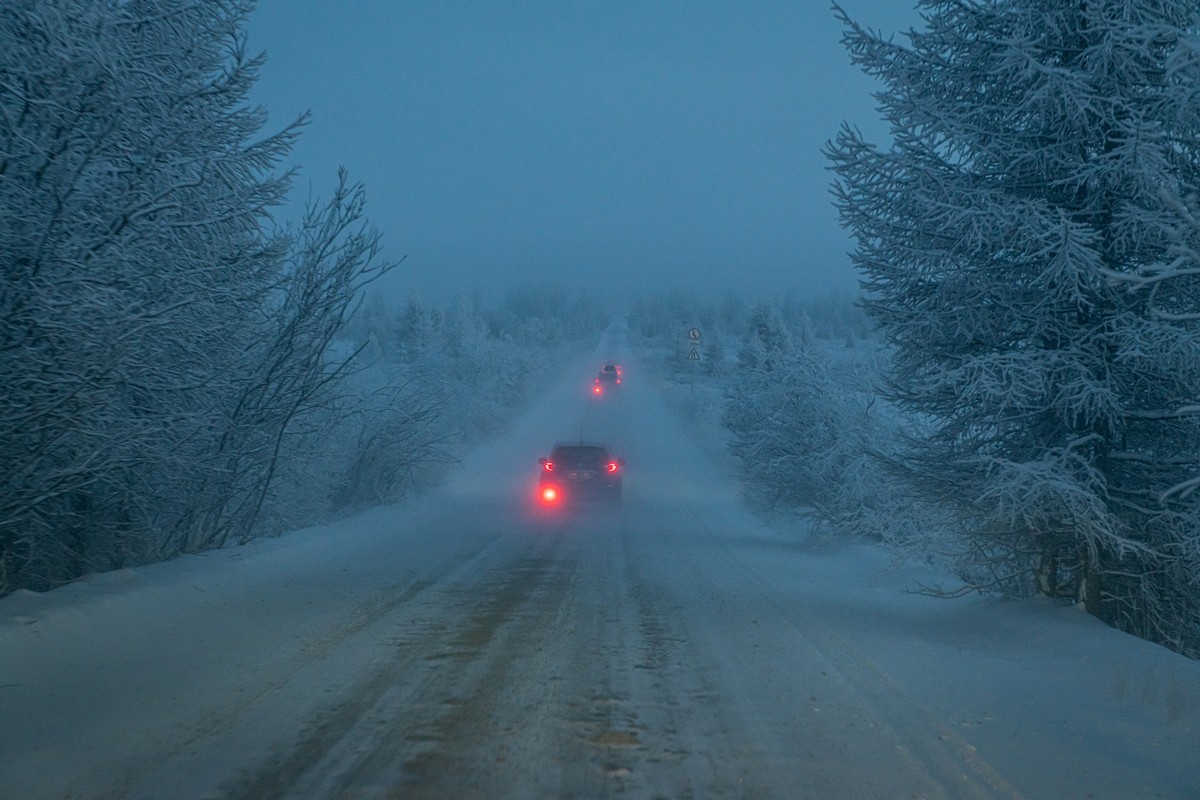 Especially at night, whenever there would be a bend or turn in the road, the car at the front of the convoy would walkie-talkie to the cars behind to warn them: after all, the cars behind would often be in a cloud of snow blown up from the road in the wake of the cars in front. Here are a few gentle turns, which would still be warned of on the radios – just in case: 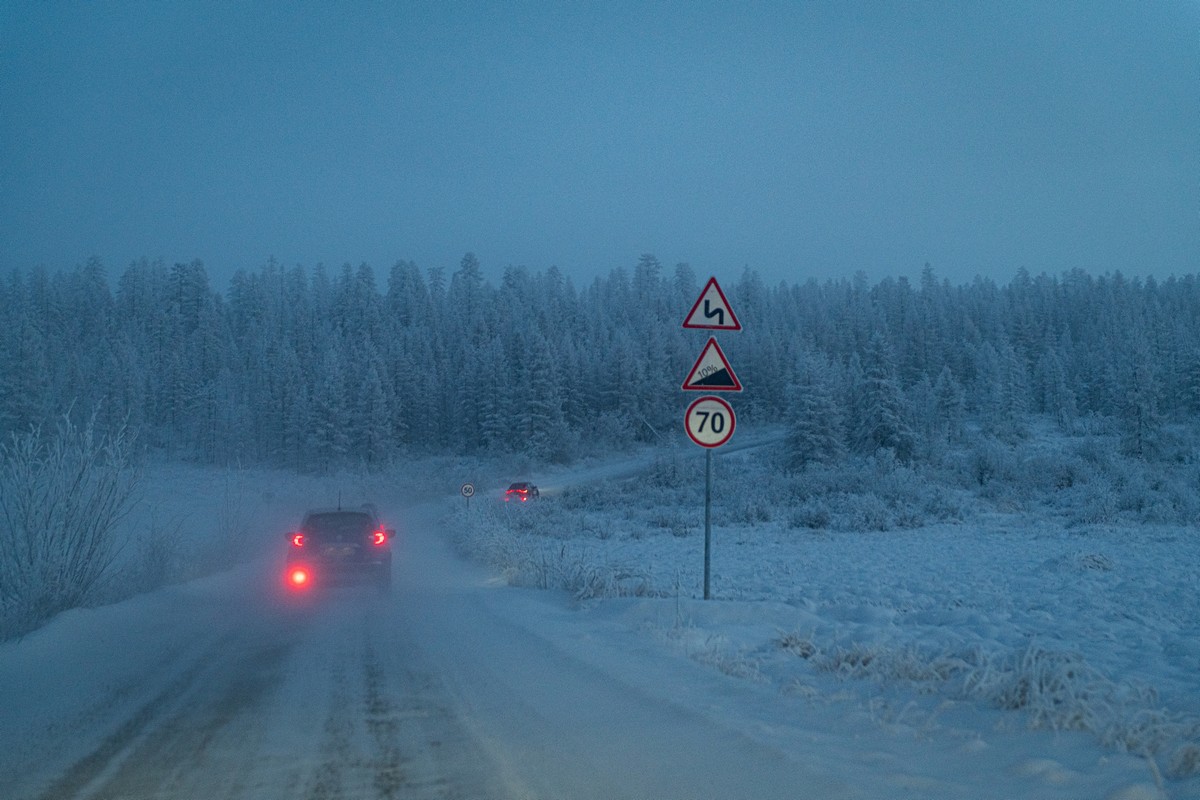 The vortexed snow from the cars in front would also hinder our in-transit photography efforts too. Accordingly, we kept the spaces between the cars real wide. Safer too…

Btw: you know how rear fog lights are really hardly ever needed, even in fog (it hardly ever gets that bad), anywhere in the world (they just annoy the driver of the car behind:) right? Well, here, en route to Oymyakon… you guessed it: really quite mandatory! 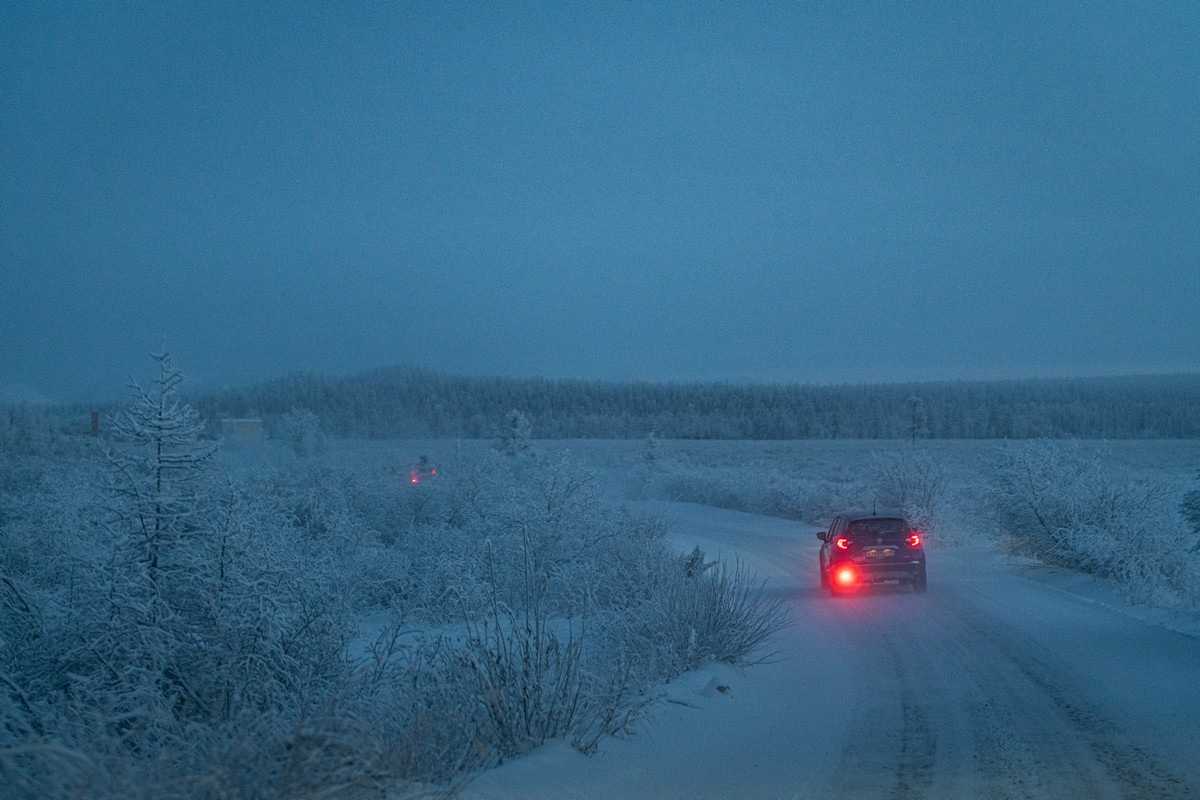 Suddenly – ‘incoming’! But I think he was more surprised at seeing our five-strong convoy ).

On the horizon – mountaintops come into view. We’re getting close… 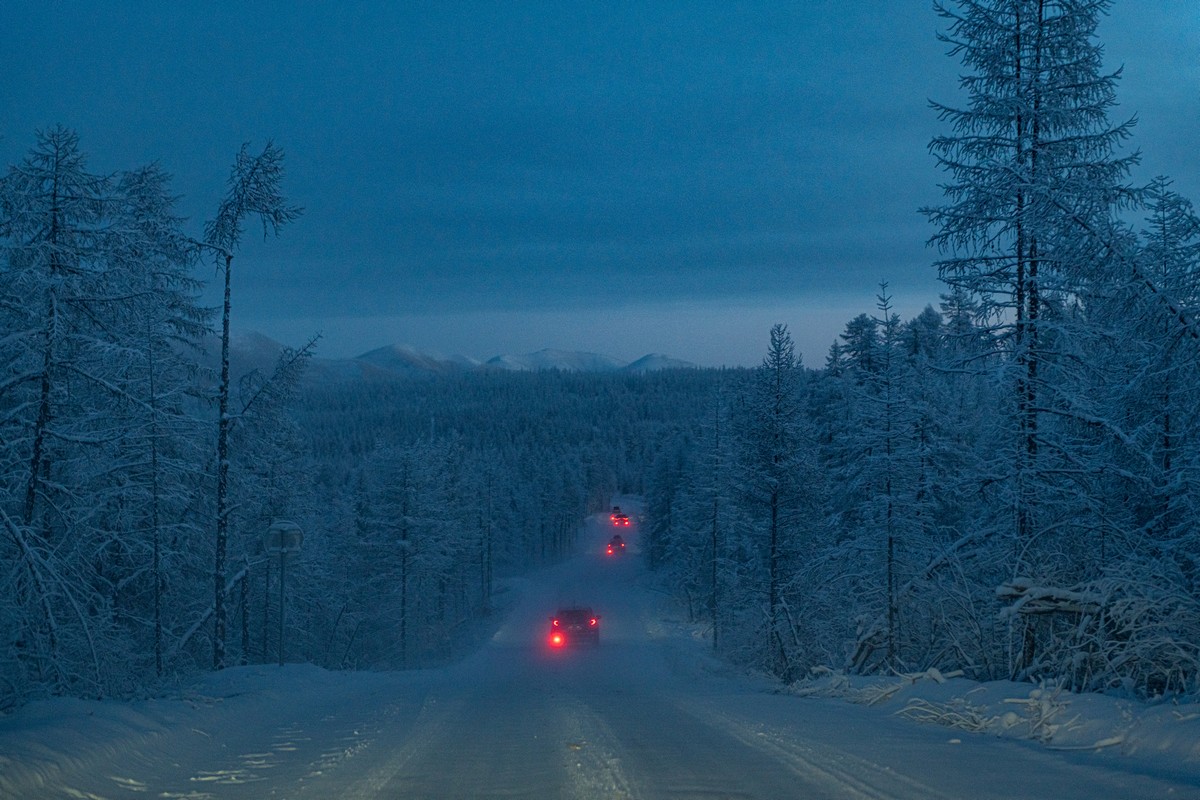 And here, finally, she is – Oymyakon! 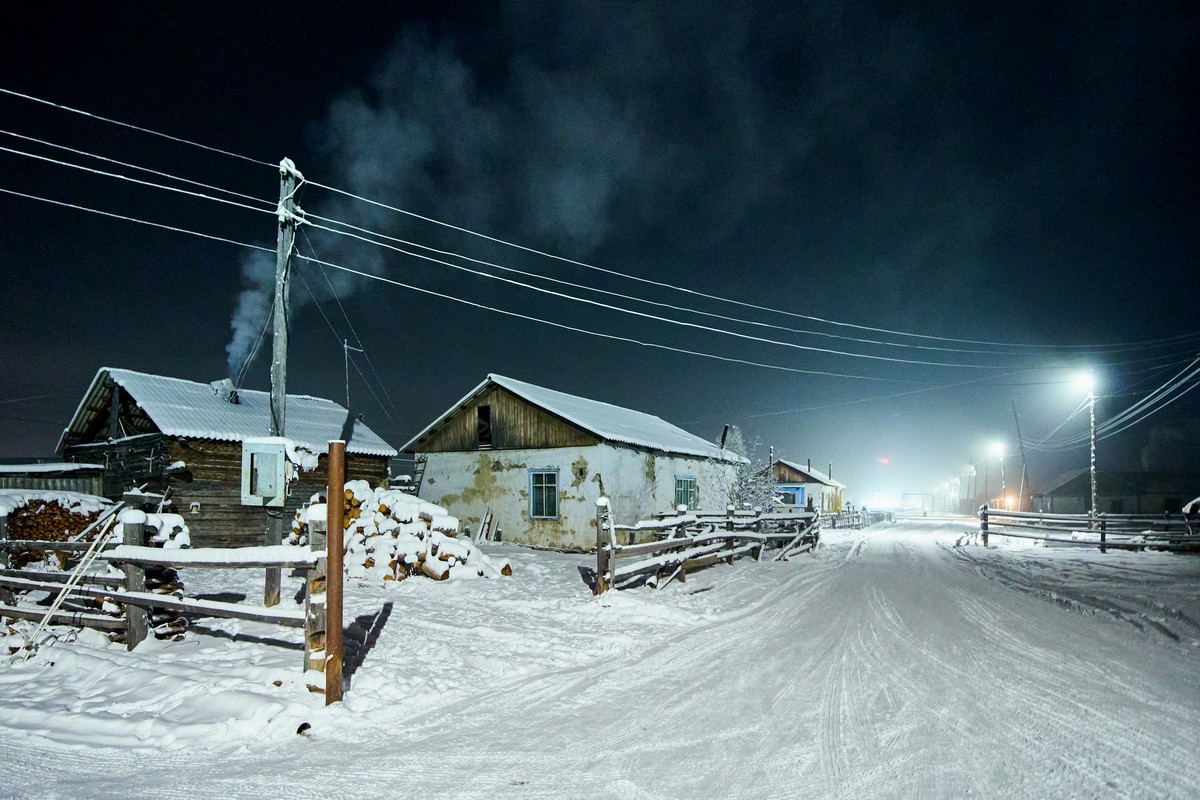 All the pics from our Magadan–Moscow road trip are here.