The R256 Highway, aka – the Chuya Highway, aka – the Chuysky Trakt, really, truly, totally, is… an amazingly modern highway! So much so that it’s as if this road… is giving… the bird (pardon my Belgian) to any and all entrenched stereotypes held by folks living in Moscow and other ‘progressive’ Russian cities about the ‘provincial backwaters’ of Russia being backward, dirty, unkempt, and on the verge of collapse. Along the full length of the highway (apart from the stretches being repaired/resurfaced – but we’ll allow that:), there is: smooth asphalt; fresh, clean and clear signposting and road markings; sturdy modern crash barriers; and assorted other attributes of ‘how a road should ideally be constructed’. Oh my great job!

It goes without saying it was pure pleasure driving along the Trakt. There were a few ‘events’ along the way, but no major hiccups or incidents. And not even a driving ticket – not a single one (and we really were pushing our luck at times (well, it did feel like an Autobahn:)! 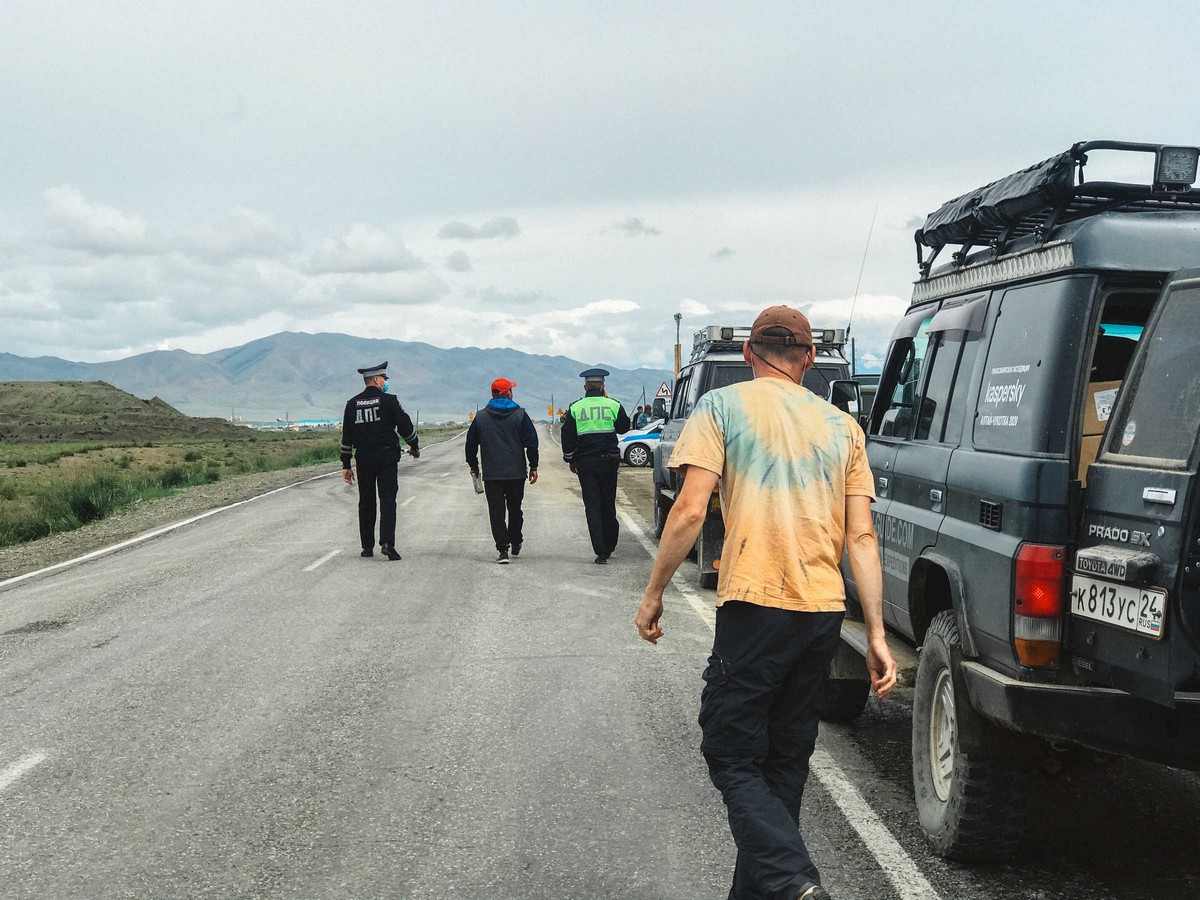 Btw – the above and also quite a few of the following pics were taken by our photo-video-drone maestro Andrey Nartish, of Dyshes Production.

Brief digression: a few words and pics about… ‘the last shop we’d see for the next two weeks!’ It was in the village of Kosh-Agach (around 70 kilometers from the Russia-Mongolia border). 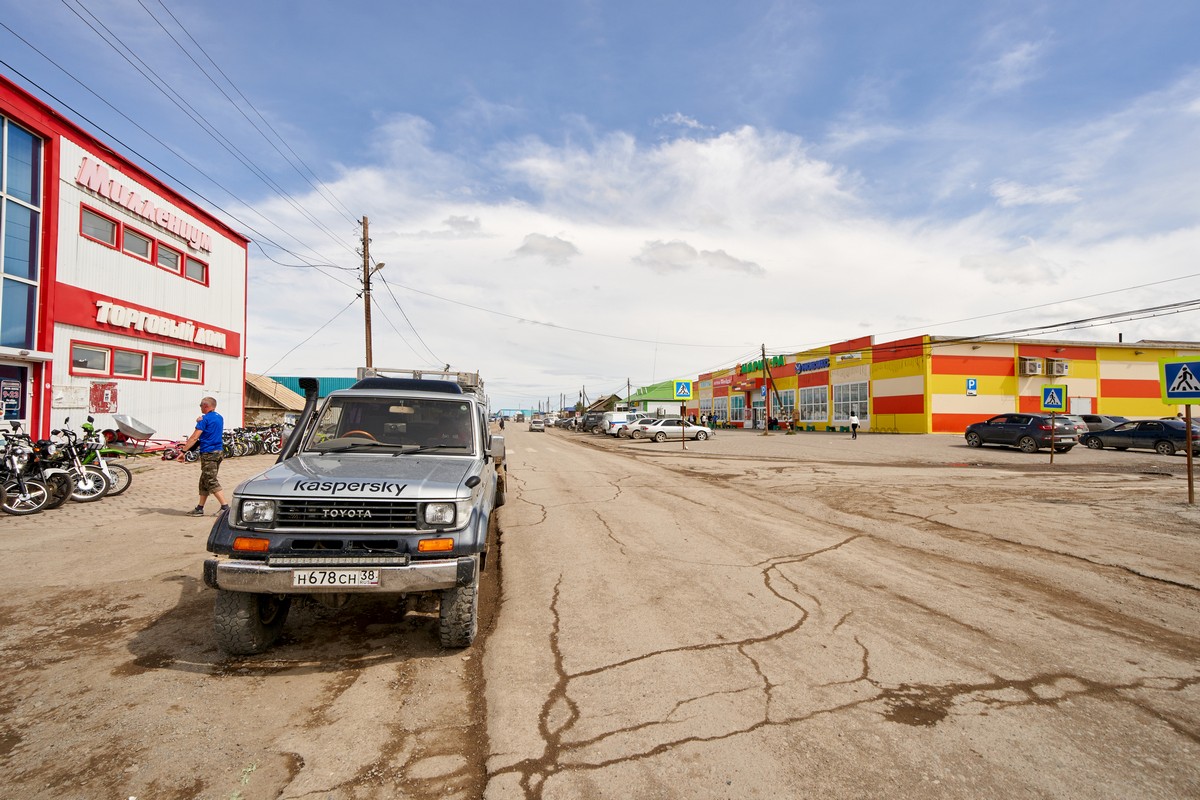 Now, maybe it’s just I’m impatient. However, I still don’t quite know how it could possibly take more than an hour to get in the provisions to see us through the coming fortnight. An hour?! I really felt that long hour too – as I didn’t go into the supermarket; I was waiting outside (taking in the small-town-in-the-middle-of-nowhere scenes). For ‘mask-up, and keep your distance!’ is just as widespread an ethos in the middle-of-nowhere as it is in any capital or other metropolis. 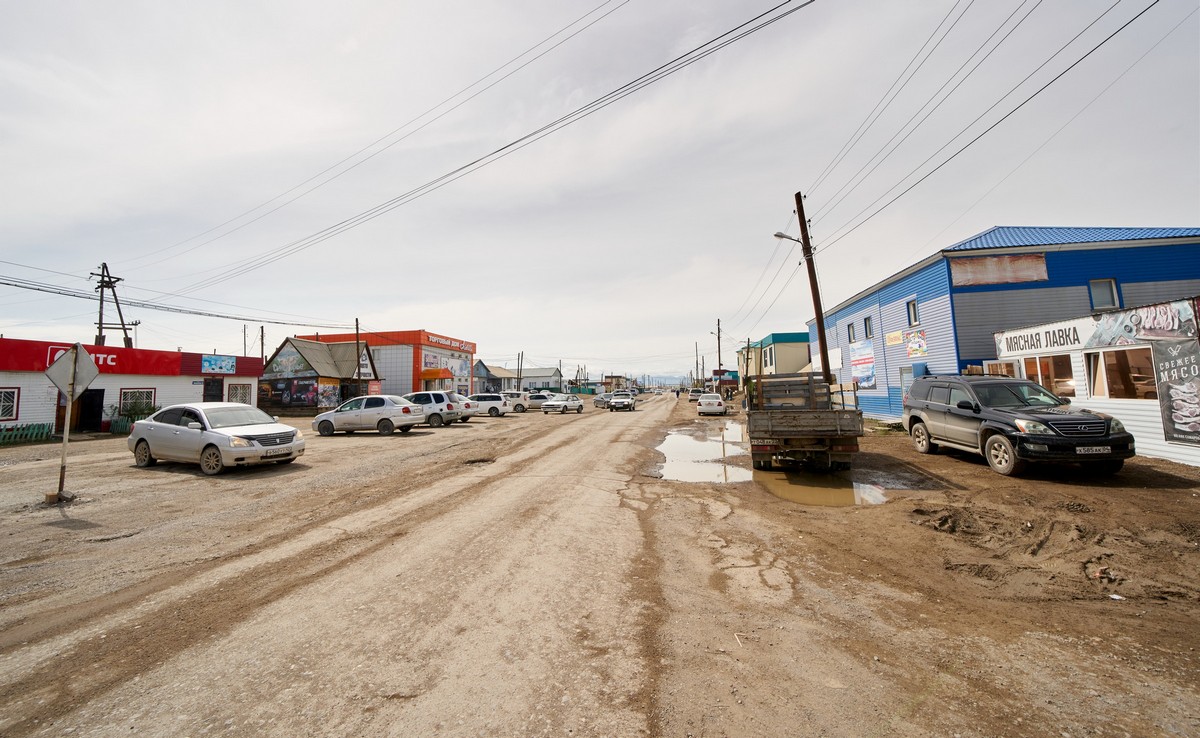 The brave shoppers finally return, and we finally get back onto the road, edging nearer to our destination – up near the source of the Katun… The highway eventually ended, but the surrounding views were getting better and better. 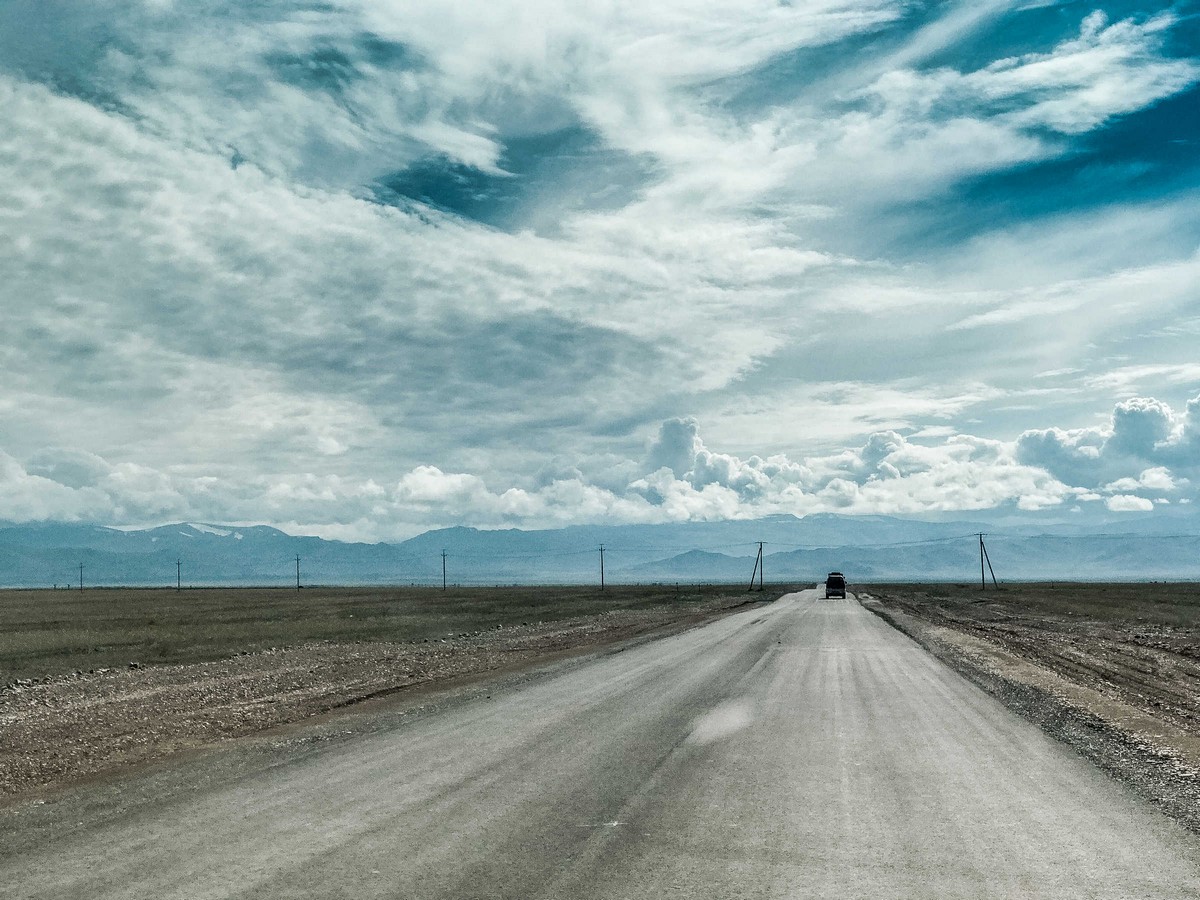 Around 30km after the ‘last-shop-stop’, we hit on the photography-restricted border (with Kazakhstan) area. Various official checks and formalities were undertaken, but these turned out to be quite painless. The main thing was that our many documents and copies thereof were all in order. I say painless but, later, when I checked our automotive telemetry, the border formalities did take a full 75 minutes. Still, could have been worse. And let’s face it – many an international airline hub would be envious of a mere 75 minutes ).

Finally, our four vehicles, each with four expeditioners inside, set out for the Altai Mountains, with no more border zone formalities left ahead of us. The mood of all 16 of us: cloud nine!

My mood, however, went down to around, say, cloud eight or seven. The reason? A brief digression to explain!…

You’d think strict international border controls would be necessary to stop nasty things crossing the border, like drugs, illegals, and other untold awfulnesses – all in the name of national security, ‘secure borders’ in particular. But no – crossing the international border here is almost as easy and straightforward as a walk in the park. So, going near the border – not crossing it – where’s the threat – to either national security or at least border security? I just don’t get it. And it’s the same in the Kurils. But they’ve stopped the ‘ream of paper if you’re not crossing the border’ in Kamchatka! So, why’d they stop it there, but not in the Kurils or the border zone with Kazakhstan? Are there some opaque goings-on? Certain folks with certain vested interests… – but in what exactly?! Is it all perhaps a throwback to old Soviet ways? Rather, is it that – being so remote out here – the changes in Russia (post-CCCP) that saw a general reduction in the required ID documentation, internal passports (nope: actually – these are still going strong in Russia), papers, certificates, passes, permits, applications, statements, notarized copies, etc., maybe never quite made it this far?! A fantasy – of course. But what isn’t a fantasy is the very fact that all this bureaucratic-paperwork madness thing is for real!

Hmm. That turned into rather a long rant digression! Why? Actually – it’s simple: that time waiting outside the supermarket, then the hour+ waiting for border documentation checks – I had a good opportunity to use the downtime to write down a few lengthy passing thoughts. And write them down I sure did, as you’ve just read ). //

We park up. But the place turned out to be a bad choice for doing so. I’ve said before that Altai miraculously has hardly any mosquitos. Not here. They were out in force and were all of a fierce mutant-vampire persuasion. Ouch. The river nearby – the Jazator, a tributary of the Argut river. Clean, cool. A few of us took a dip… 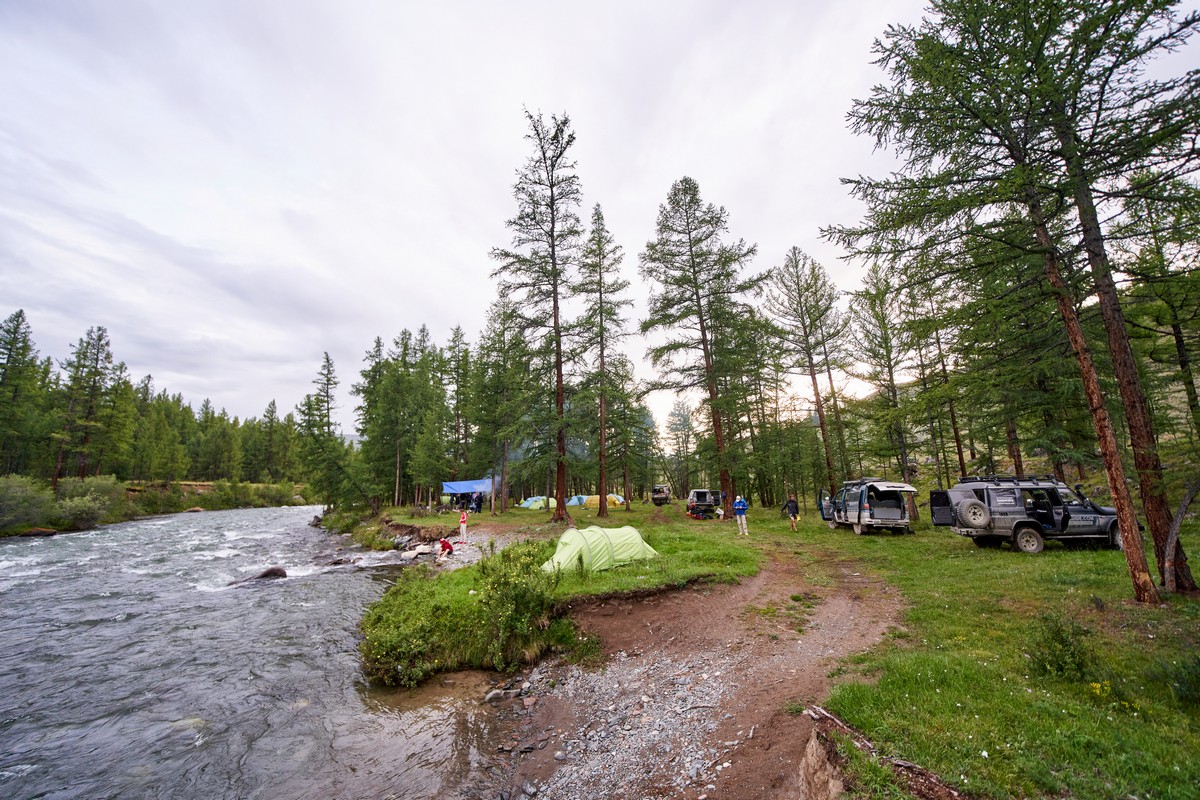 Why the laptop? Simple – to back up all my pics and vids onto its SSD. No checking my email or the daily newspapers – honest! And I wasn’t doing cloud backups either: no internet here – only satellite link, an unreliable one at that. 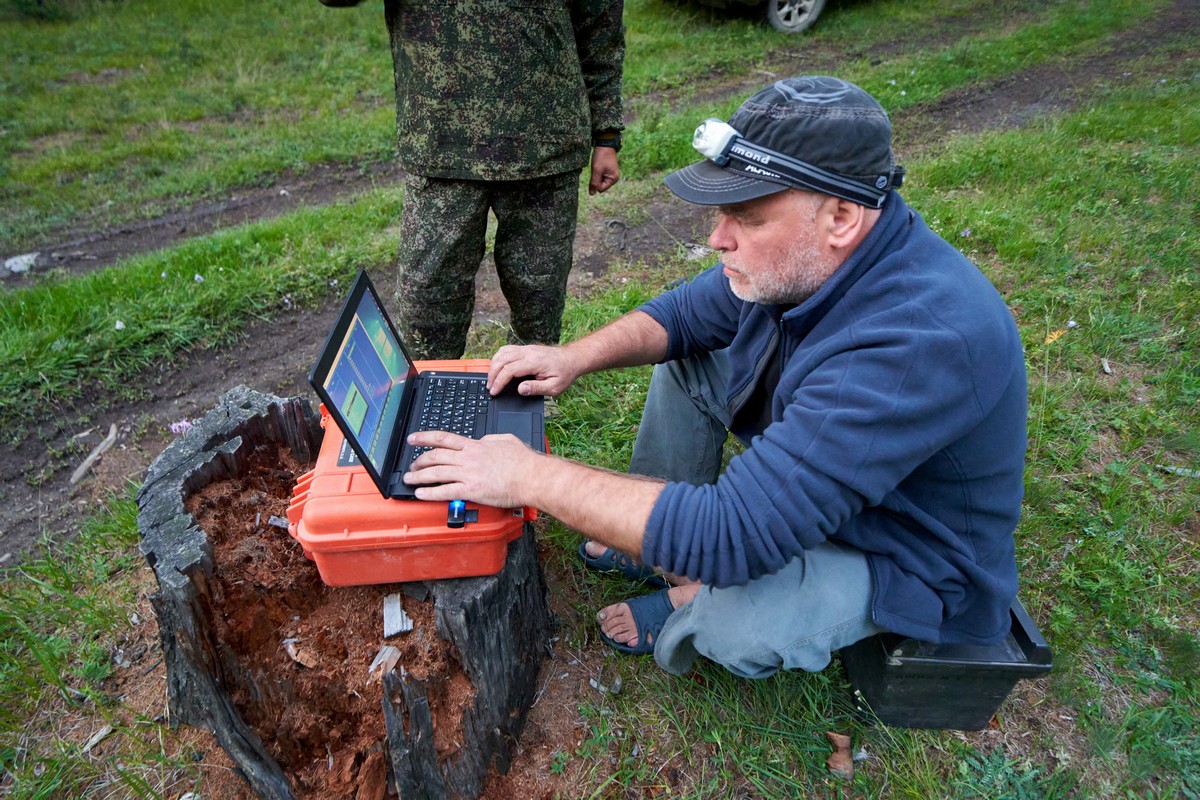 The following morning we covered 40km to the village of Belyashi, the next stop on our route…

It was at Belyashi where we switched mode of transport, from our road vehicles to… – tell you in the next post!… 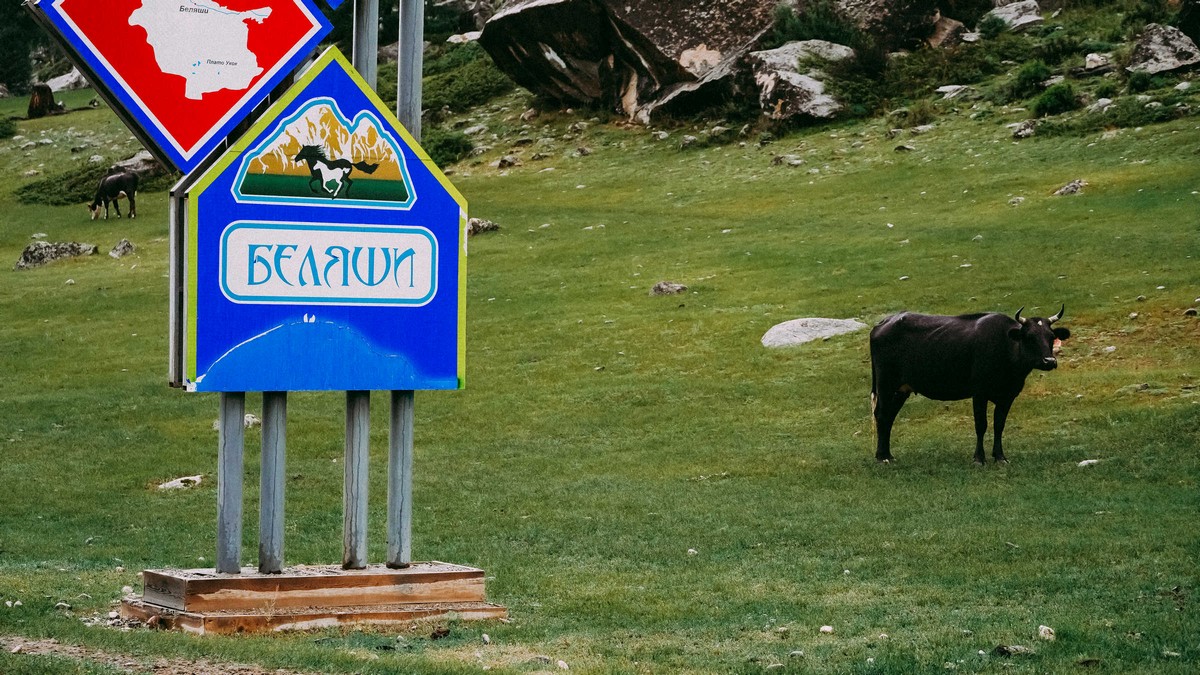