Lake Teletskoye fills you with rapturous joy. Its vastness, its fiord-like vistas, and of course Altai’s mysterious… vibes. Bit more info re these mysterious vibes, btw: They’re not only magically calming-soothing and encourage you to go full-on meditative “we’re-all-one, there’s-only-now”; for some reason they also… keep you from sleeping! I reckon it must be that the part of the brain that’s responsible for all the deep and philosophically pensive activity simply doesn’t permit the rest of brain any room to maneuver: it kinda just hogs all the resources, much like a very old computer antivirus ). 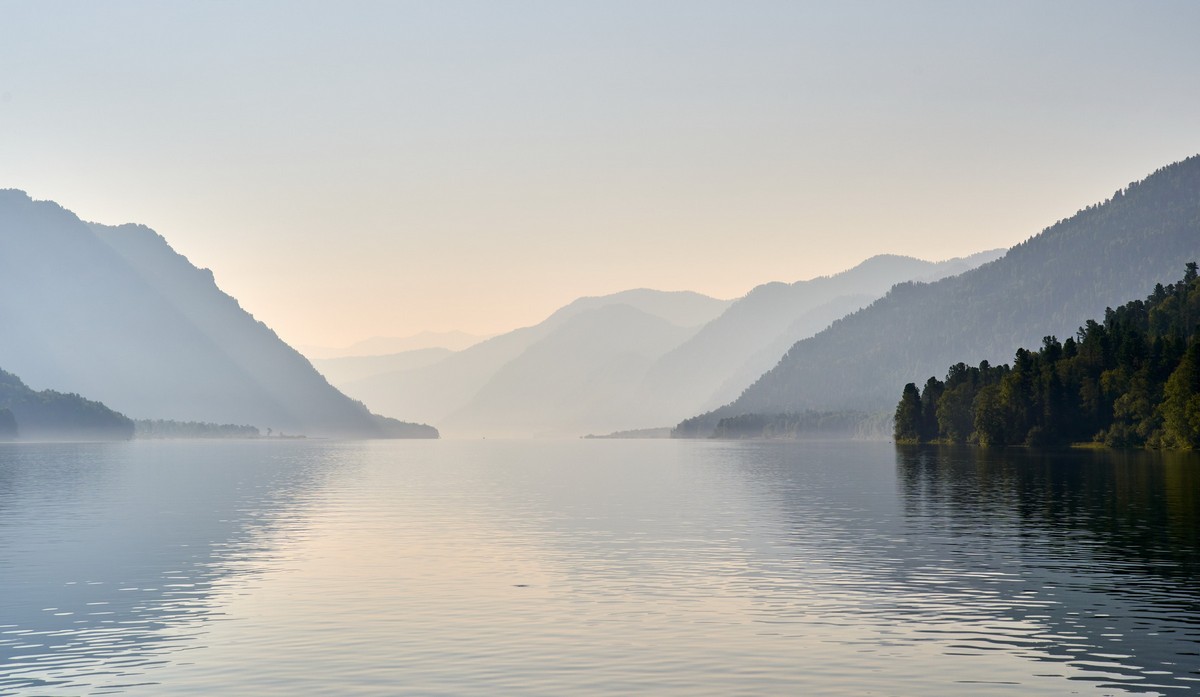 The lake was calm and even-surfaced when we were there, with occasional odd ripples catching the sun (to fairly blind you:). The views all around – aaaaah (if you’re eyesight’s not shot:). 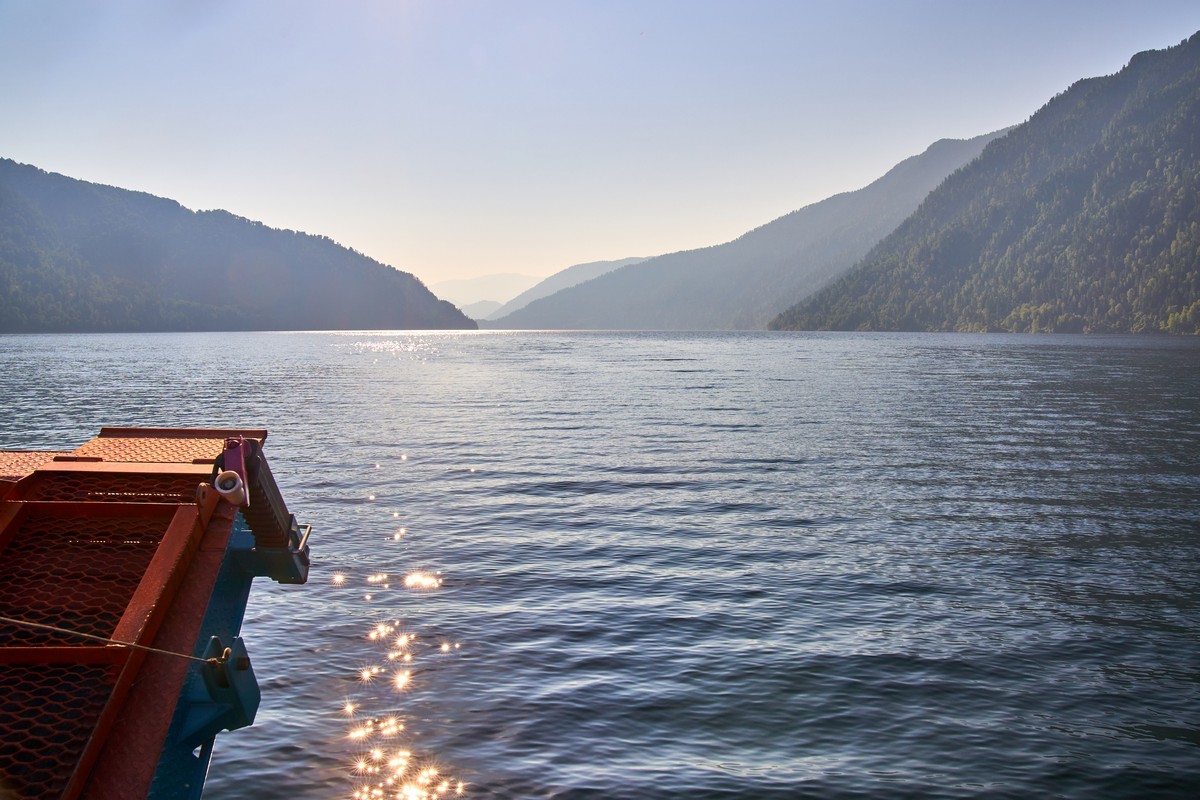 Now for a few technical details. We drive on to the ferry, we fasten down… 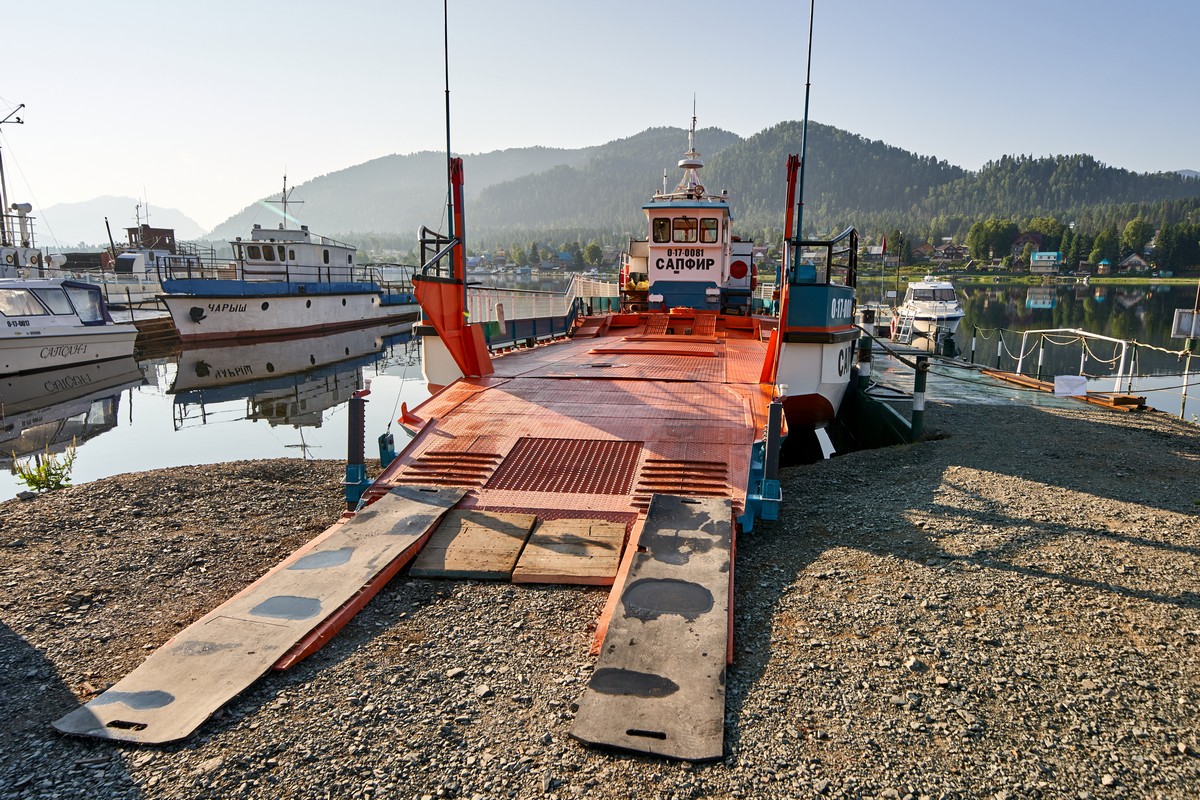 And off we sail ferry. The bridge over there crosses the start of the river Biya, which comes off Teletskoye Lake. 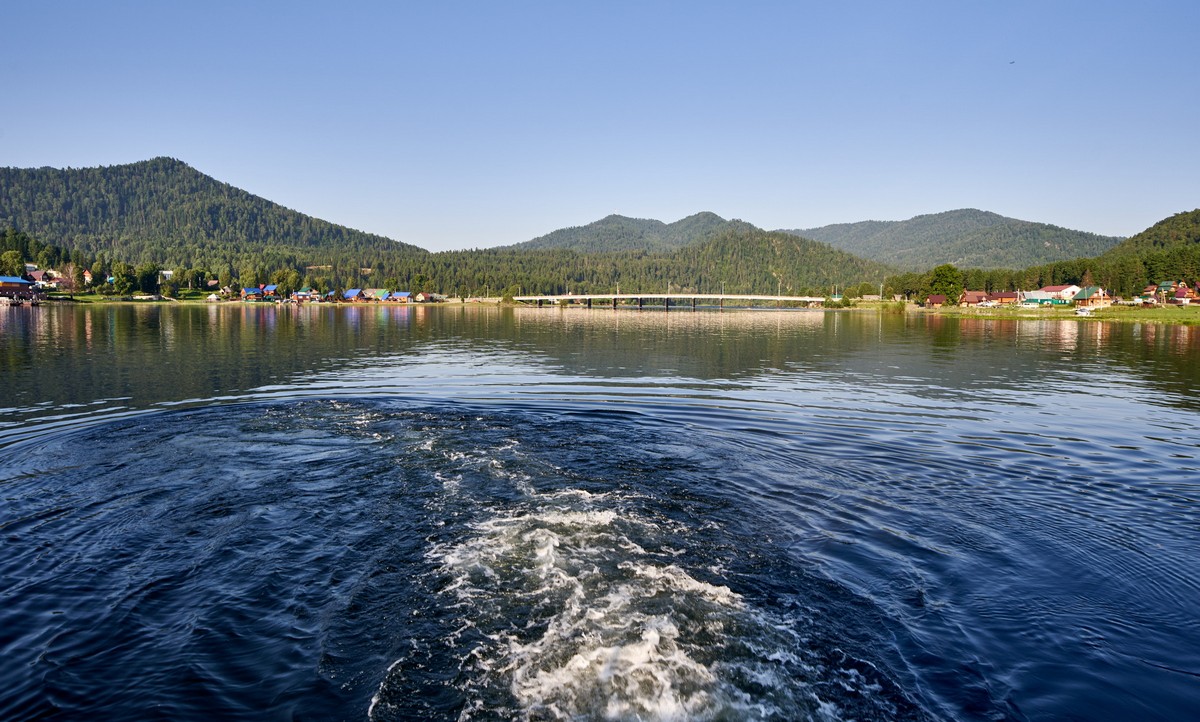 Calm, peace, quiet; beauty – all around. Only occasionally is the silence broken by splutters of the engines.

The motor then settled down to a steady knocking rhythm, which for some reason reminded me of the monks in Buddhist monasteries in Tibet!

More strangeness: the sun was shining brightly, but it wasn’t hot! Maybe that has something to do with the high altitude of the lake, whose surface is 400+ meters above sea level; also perhaps the deepness of the lake – the water remained very cold. So yes – no matter how hard the sun tries to do its thing, the climate here stays nice and comfortable – even in the middle of summer. Nice. (Btw: Teletskoye is the fifth deepest lake in Russia (and Russia has a lot of lakes).)

Onward we sail, to beat of the metronome engine! 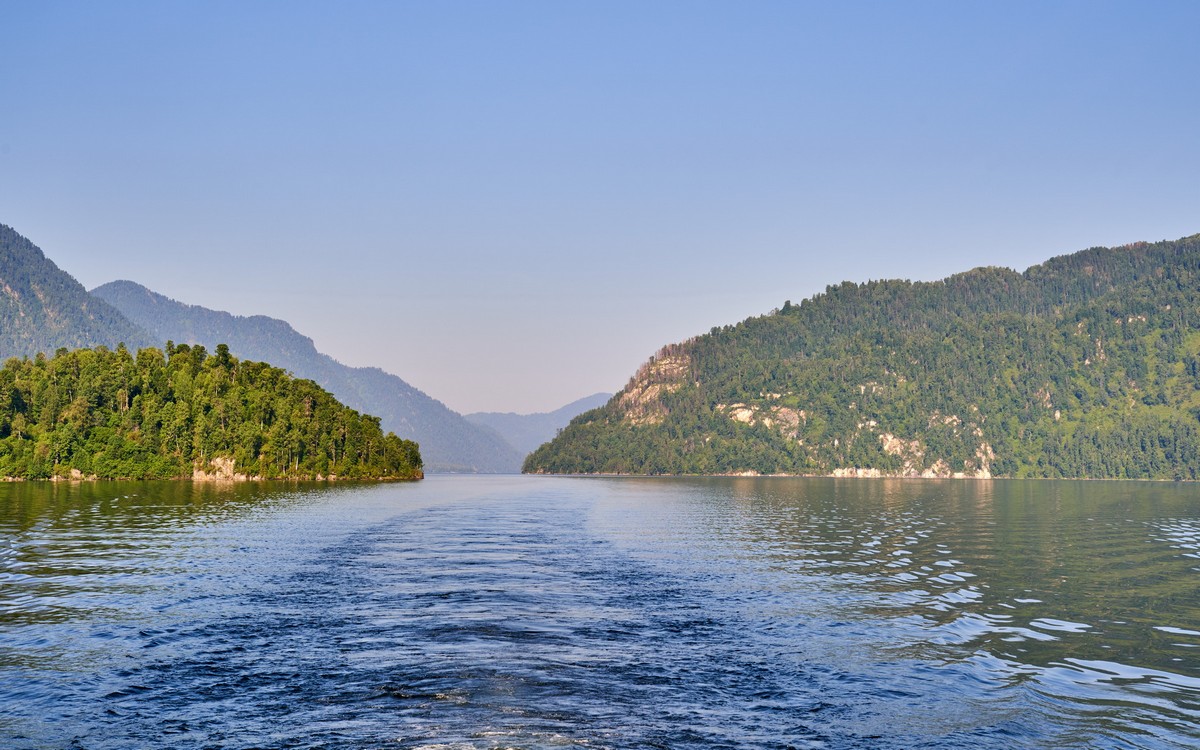 We turn south, as does the lake itself! For it has an… original shape. 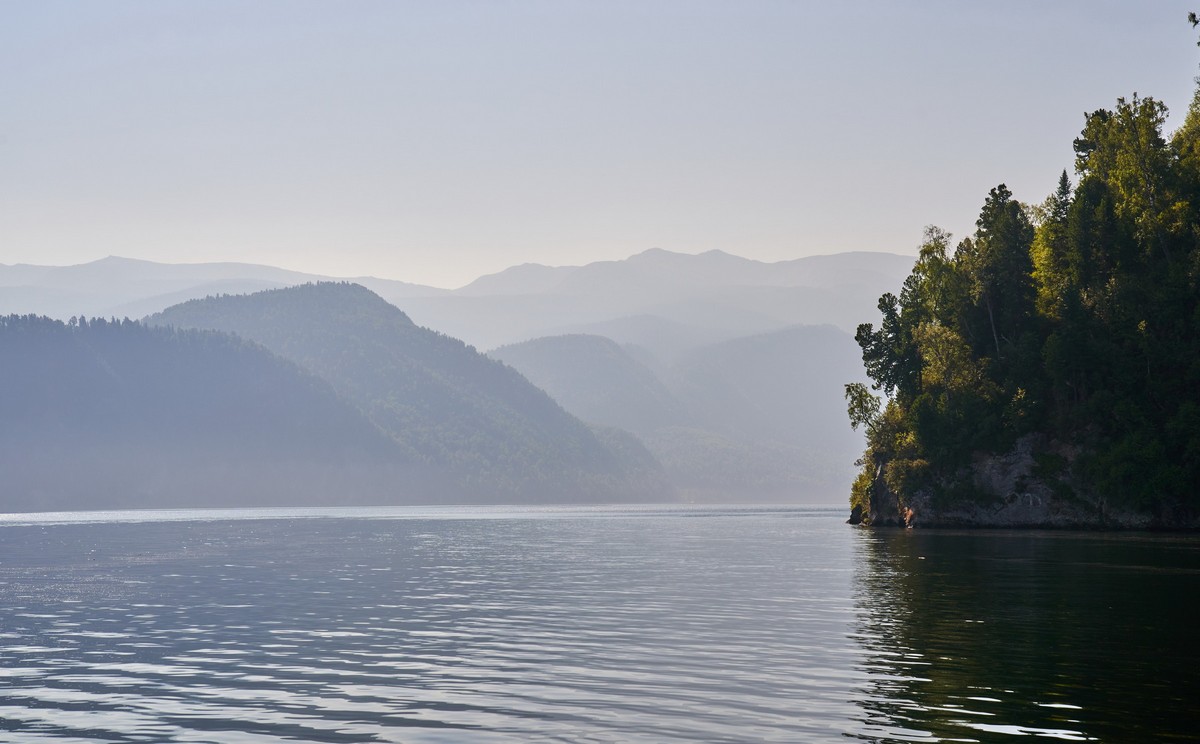 Btw, there’s a curiously mysterious (what else?:) anomaly here regarding the wind when the weather’s generally good: of a morning the wind blows from the north to the south, while in the afternoon – vice versa. Therefore, all boats, ships and ferries try and follow the wind. Here, for example, it’s all calm, while up ahead around the bend there’s rippling – we’re entering the windy zone… 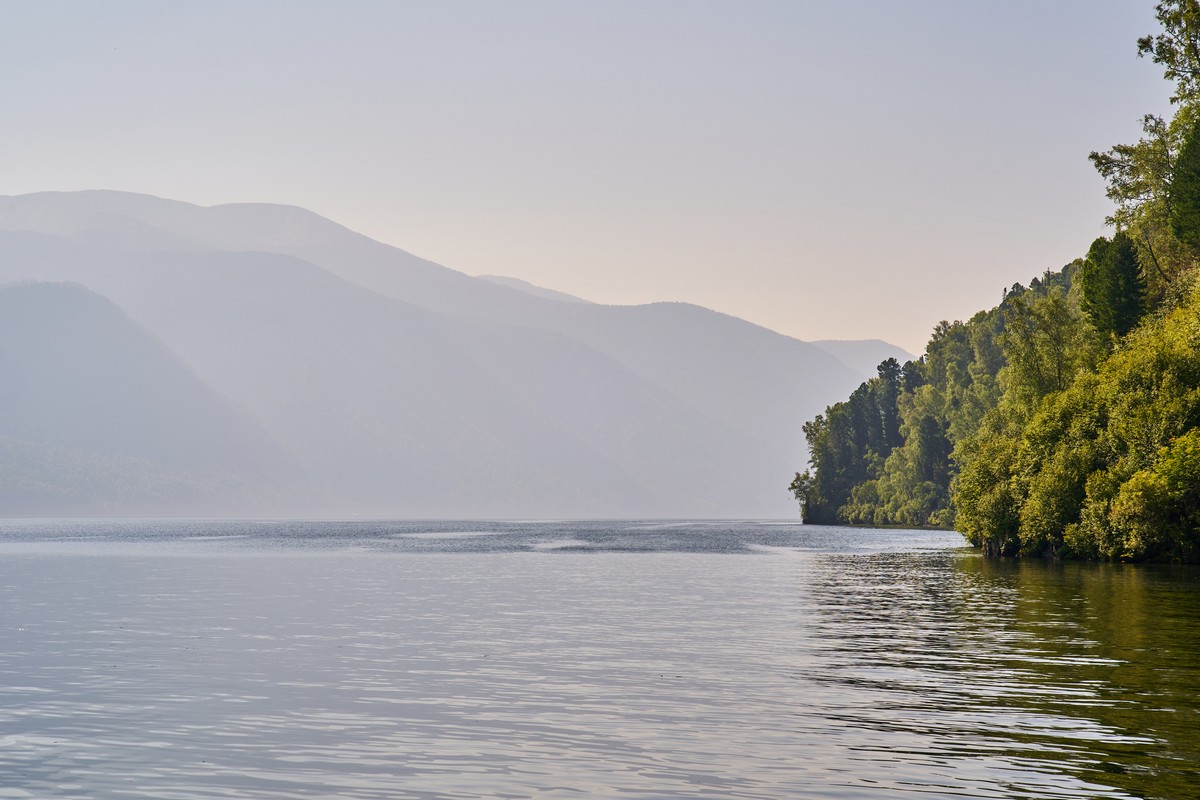 You can better see the effect here -> 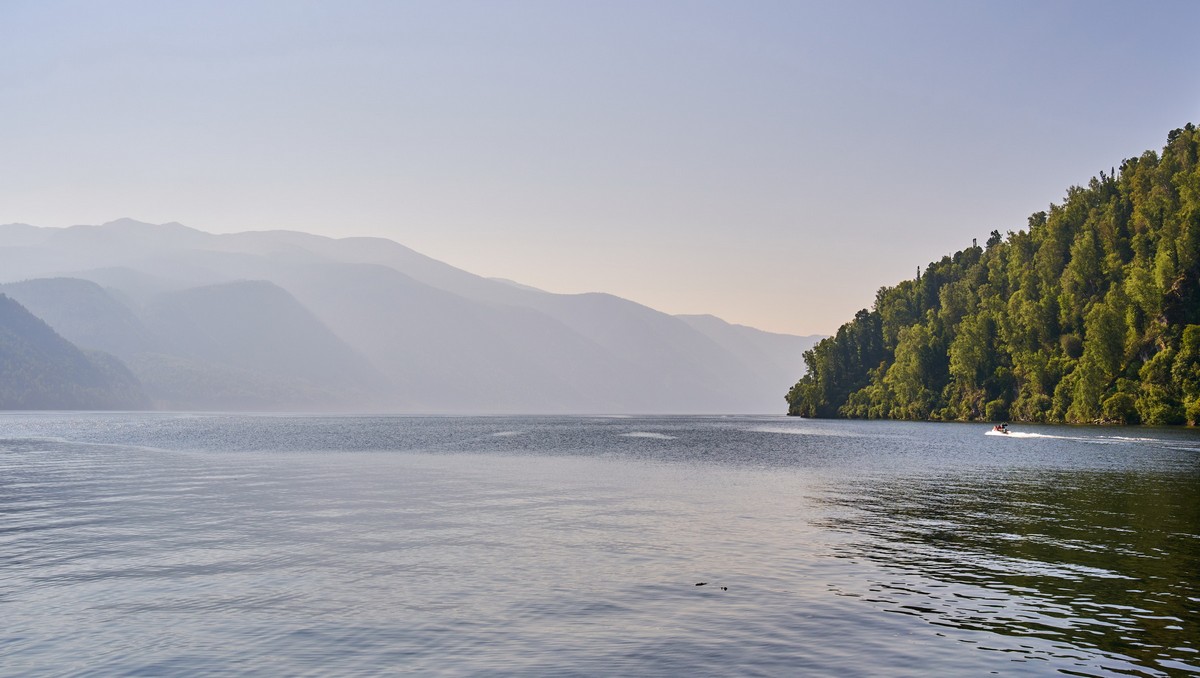 Having turned, the far end of the Teletskoye comes into sight ->

Another two or three hours to go. One could have a snooze; but not me – and miss all this? And I doubt I’d have much success sleeping even if I’d wanted to. 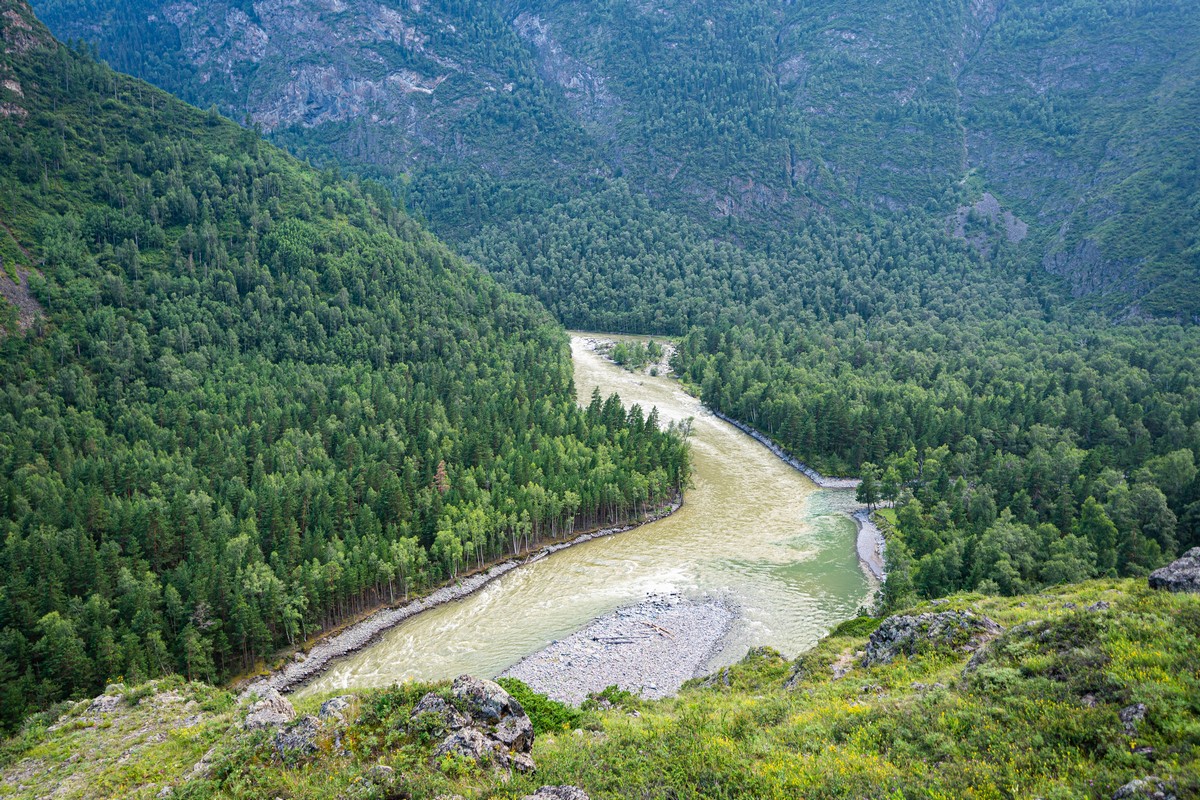 I’ll let the pics do the talking… 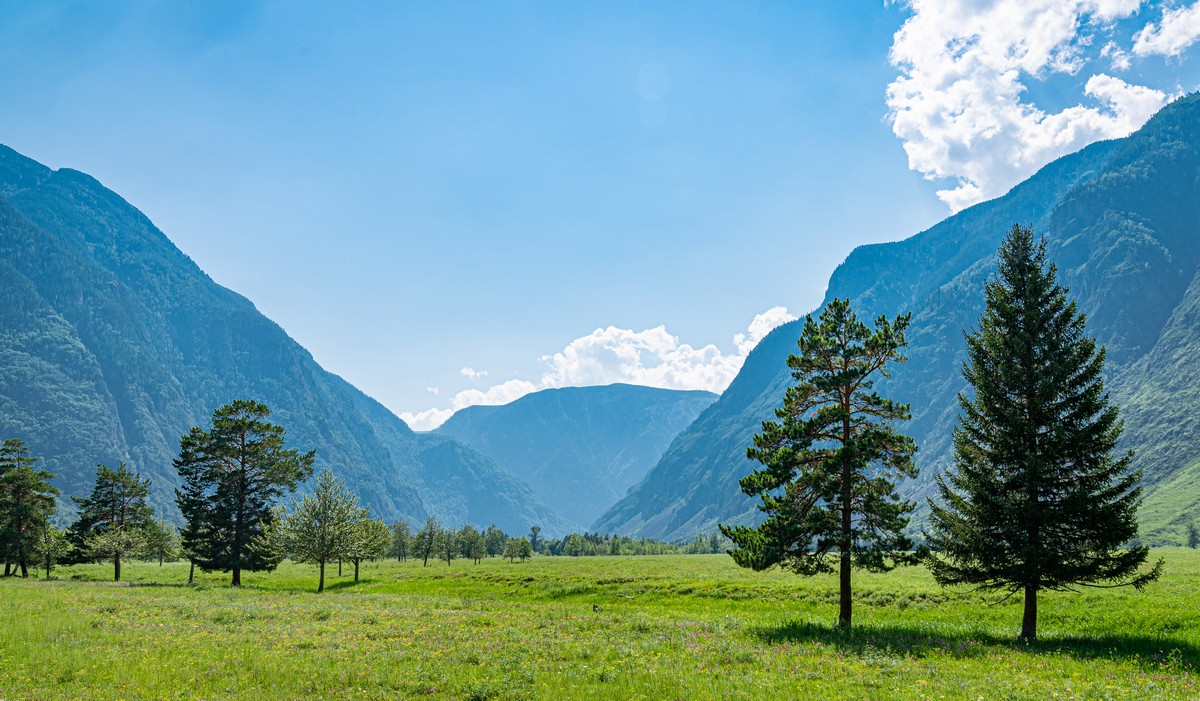 Now that is a tall waterfall:

Somewhere down there the Bashkaus is squeezed into a gorge; you can get through on foot, but not by car ->

Where the Bashkaus meets the Chulyshman river (around 20km from Teletskoye Lake), the Bashkaus calms down, with no rapids. 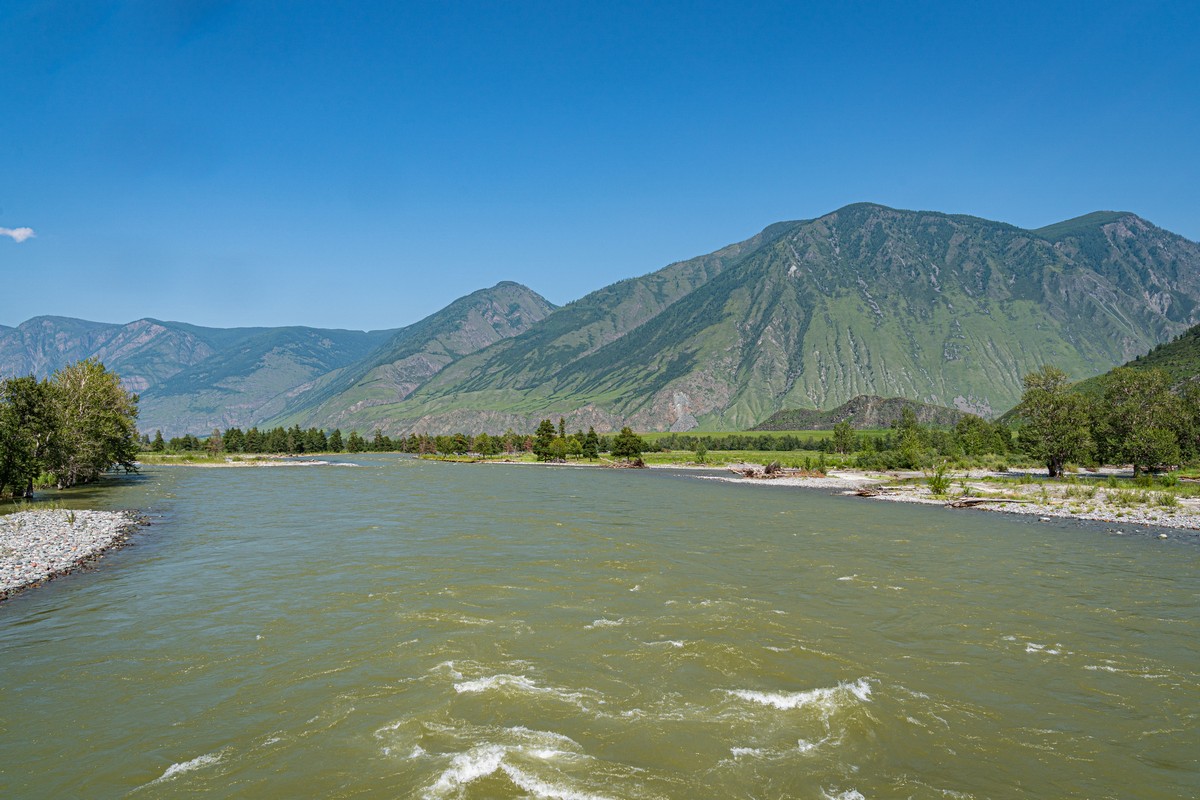 Note: this year there was a lot more water than usual. So if some of you, dear readers, have been here before and the Bashkaus appeared smaller-scale and cleaner – that’s perfectly logical. This year, just before our arrival, it had been raining a full two weeks; the rivers swelled and overflowed, and the water was given a ‘lick of paint’. 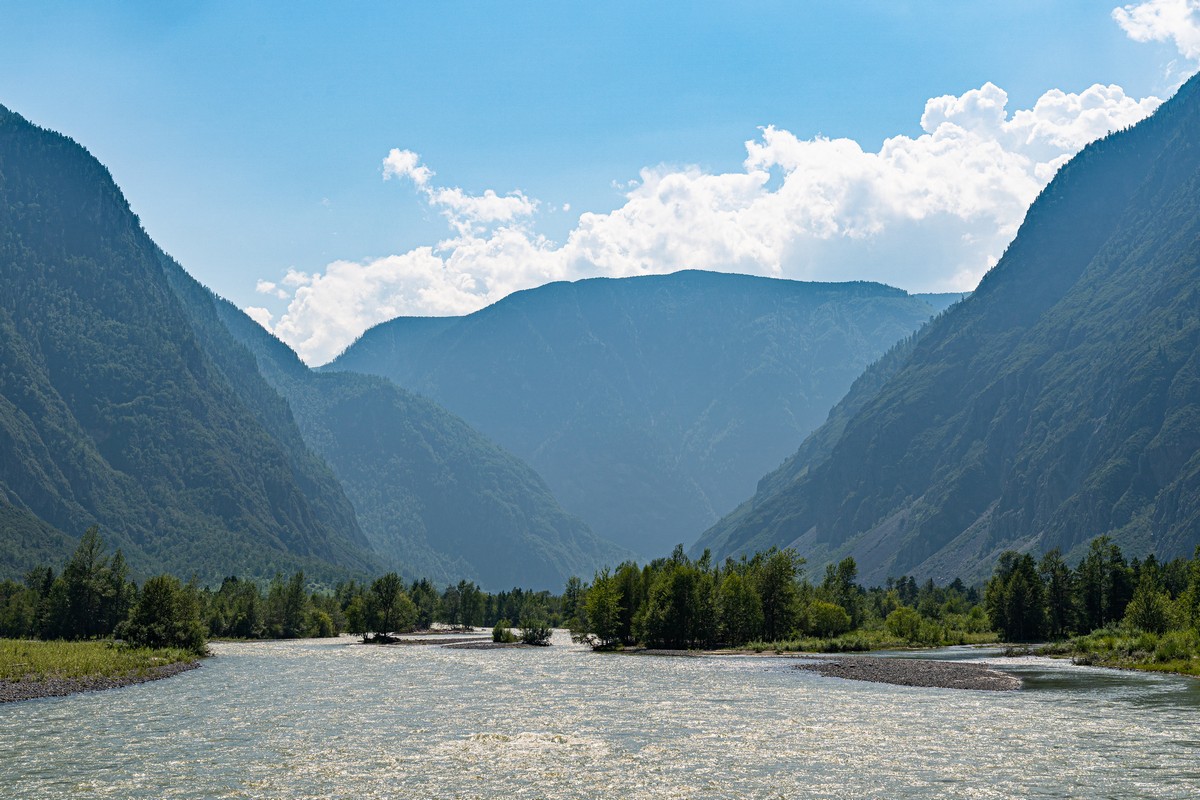 It surely goes without saying that this substantial body of water was duly swum in (just like all the other, lesser water bodies we came across). 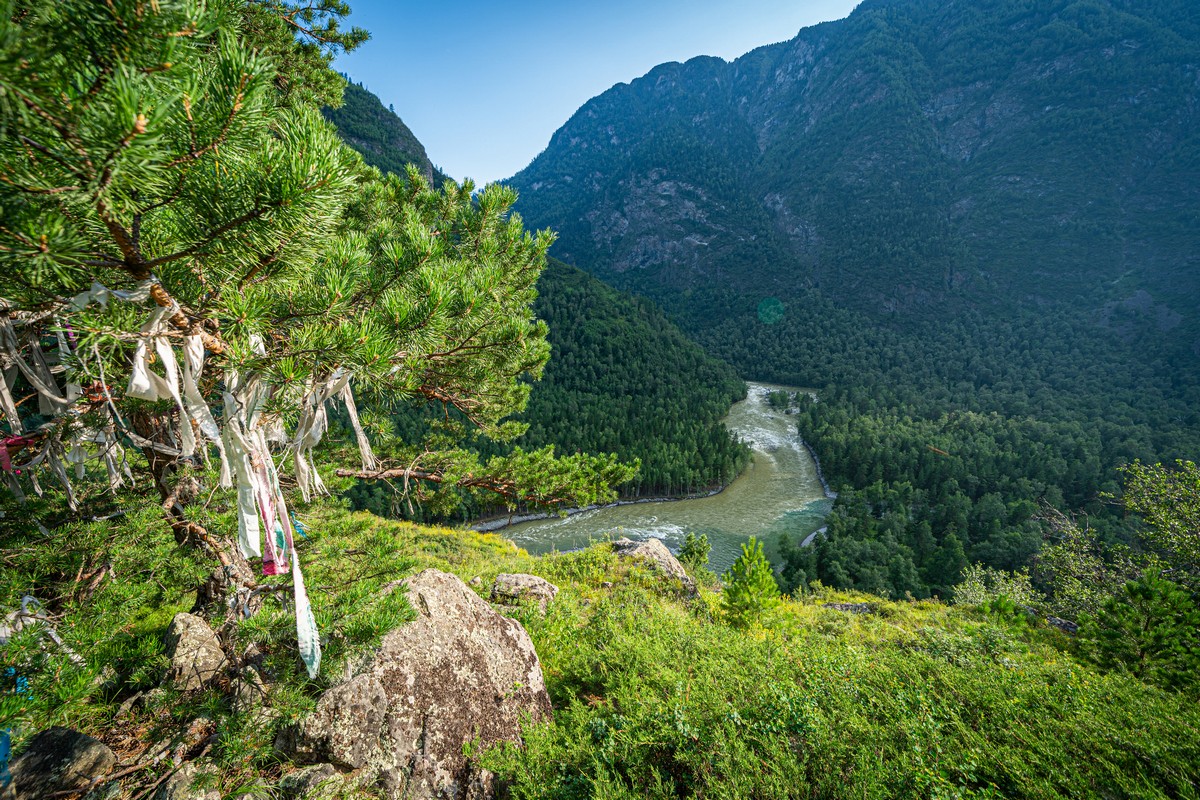 We stayed the night at a cozy camping site. And that was the day over. Phew. Tomorrow – Chulyshman… 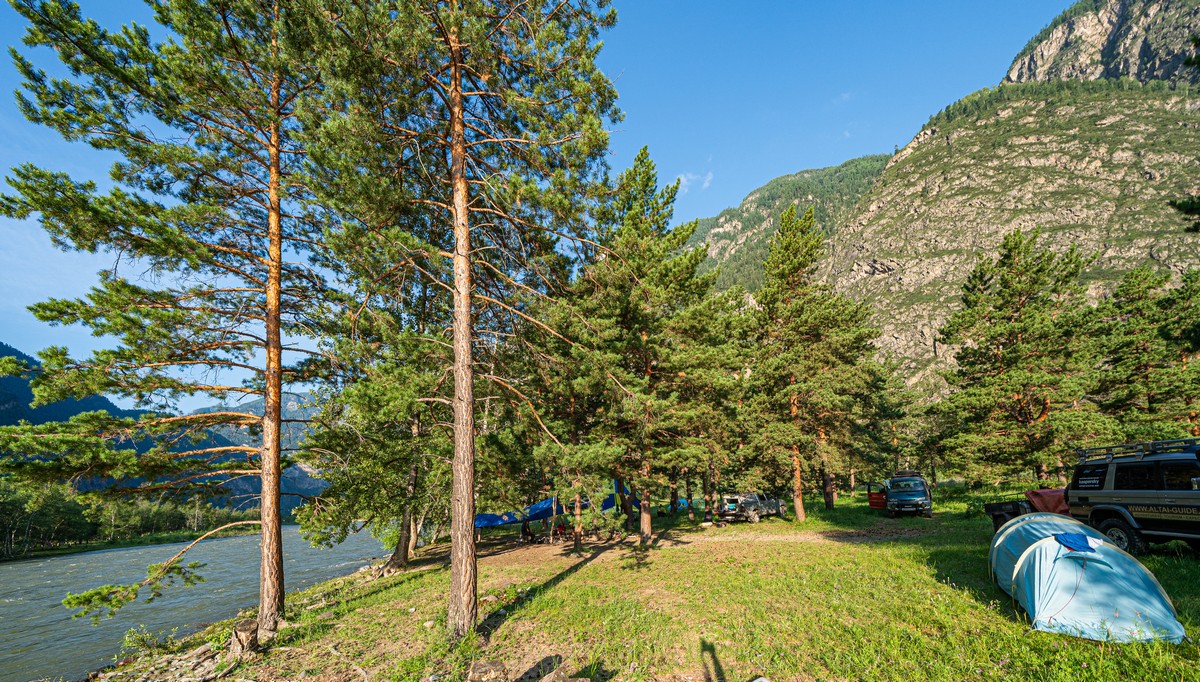 And for dessert – a video-overview of the day:

All the photos from Altai are here.

Farewell Kuril Islands, adios Sakhalin, and hasta la vista Kamchatka, where we began this expedition. But we had a worthy, if very… specific post-scriptum itinerary planned, so it wasn’t quite auf wiedersehen expedition just yet. Coming up were: the western shore of the Sea of Okhotsk (in particular, Bukhta Vrangelya, or Wrangel’s Bay) and the […]