Perhaps the first question that comes to mind for anyone who visits Baalbek is: who placed all these massive stones here, when, why, and how? Ok, ok: the first four questions ). 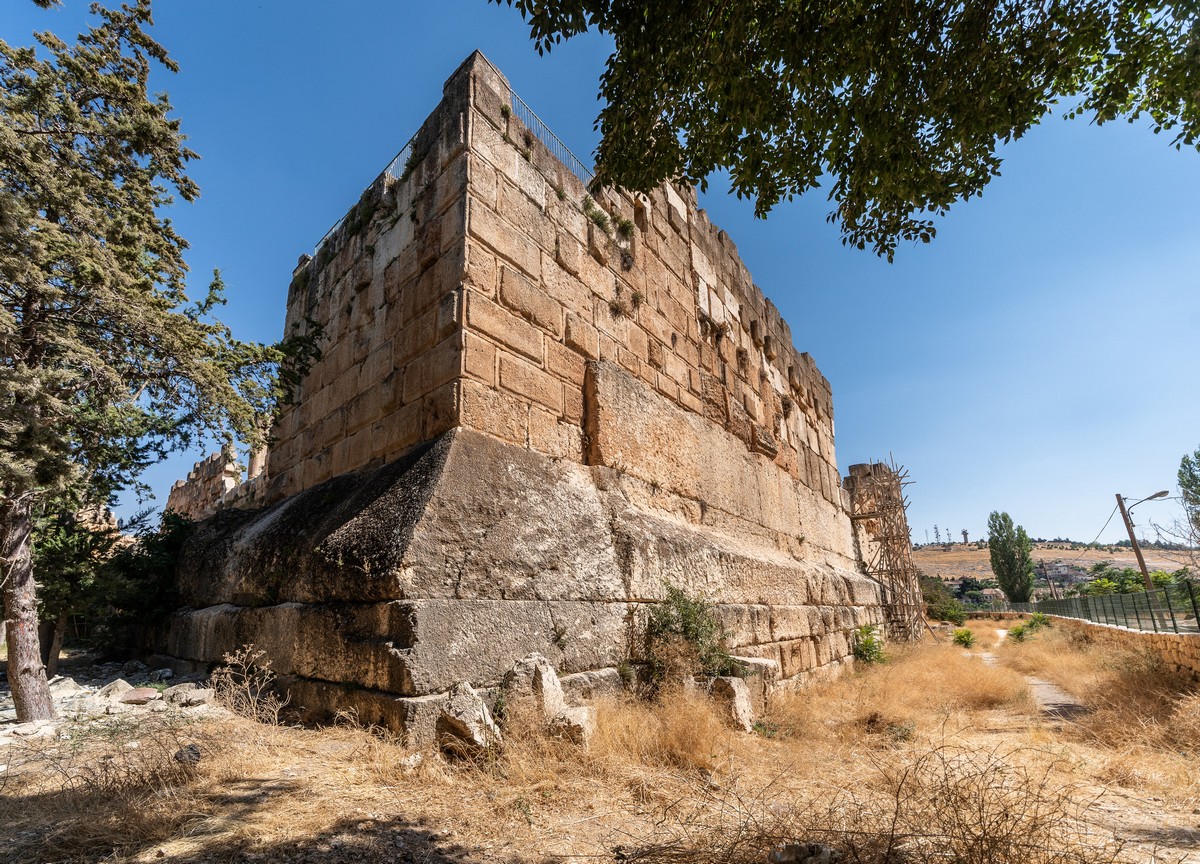 The stones are gigantic: almost too big to fit in a photo! 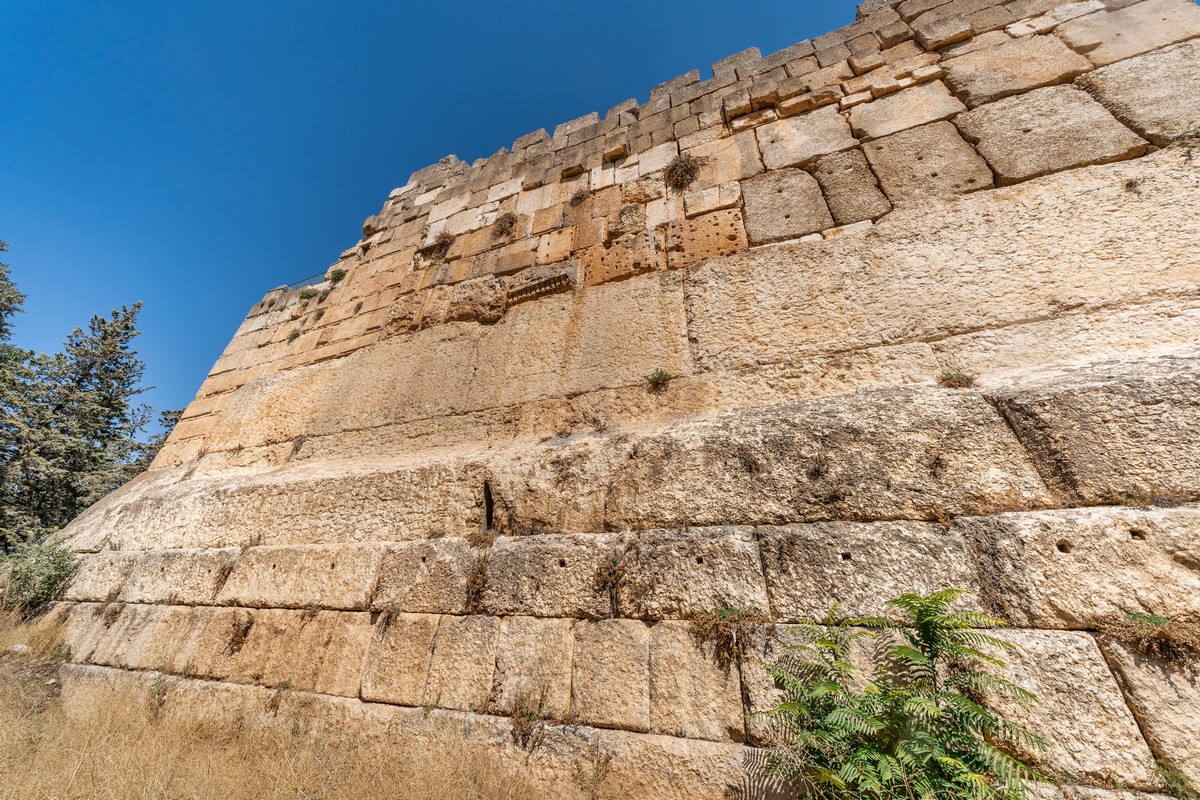 But you can’t really get a feel for their size if you see a pic just of them; you need to add a few Homo sapiens: 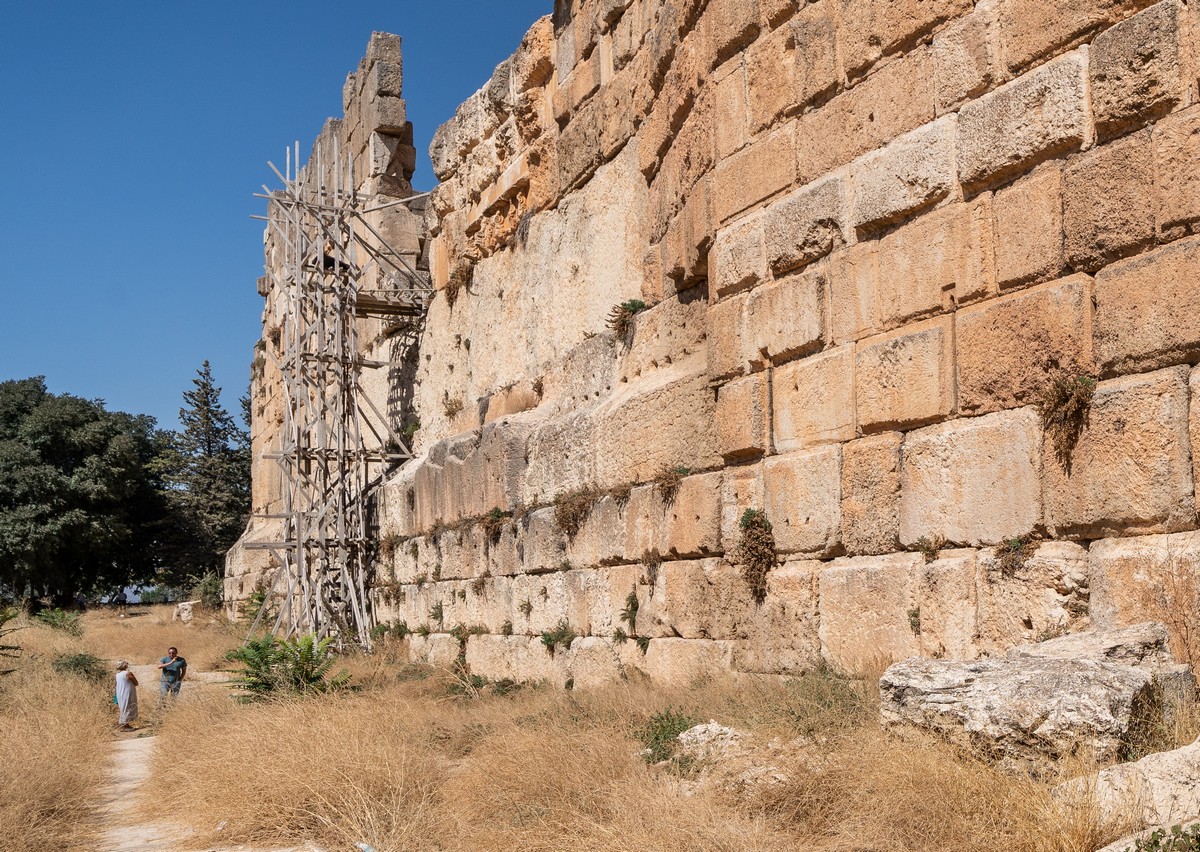 Here, the structure goes like this: smaller blocks at the base; above those larger ones; and above those – MASSIVE ones, with the following dimensions: 21 x 5 x 4 meters! 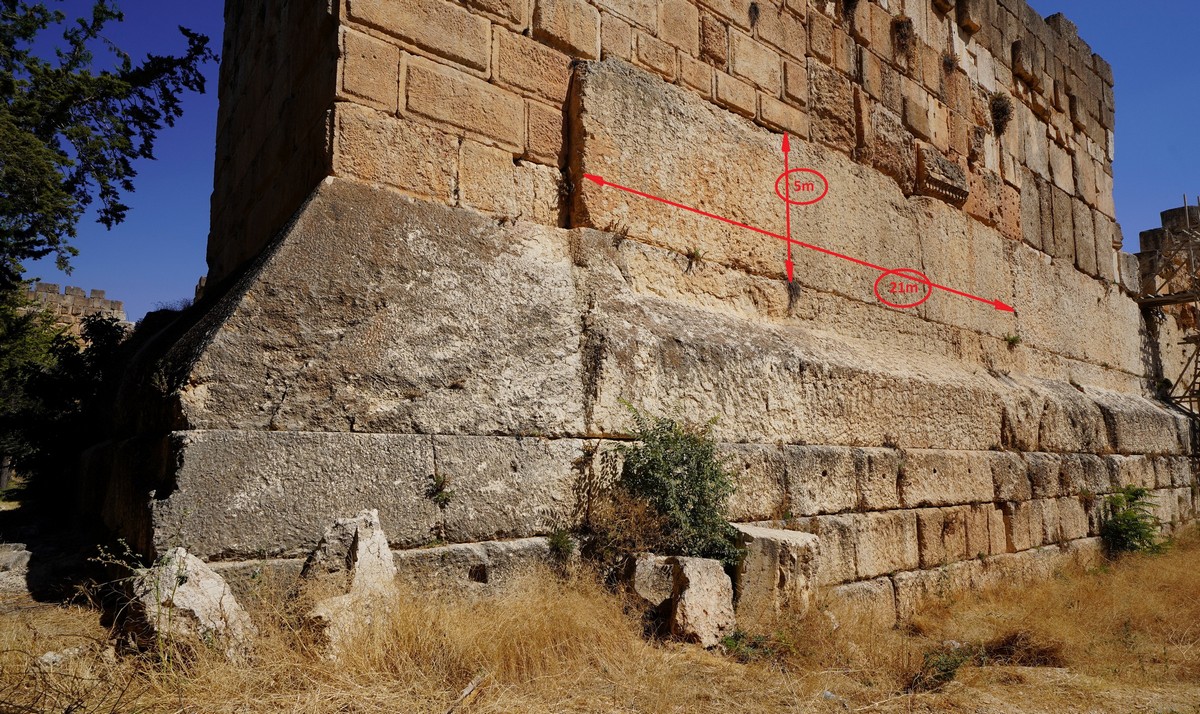 And those humungous blocks are seven meters above the ground. So who – or what – lifted them up? Wiki doesn’t provide an answer. These mammoths are called the trilithon of Baalbek. Three colossuses weighing… 800 TONS EACH!!! Again: hard to imagine what that looks like. Let’s find some random thing to compare it with. Hmmm. I couldn’t find anything suitable. Might you, dear readers, know of something that weighs around 800 tons?! 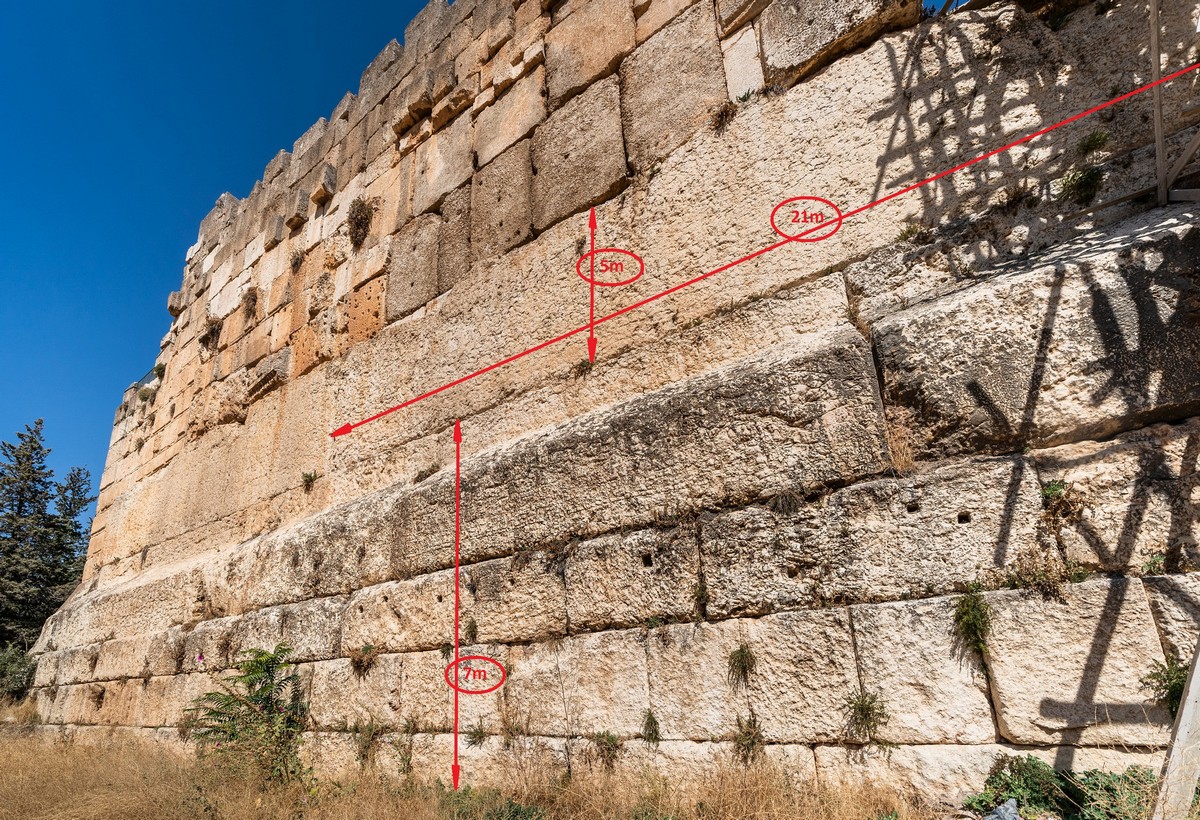 The construction is so enormous it wouldn’t even fit in a panoramic pic! I had to step quite a way back, but couldn’t go too far as a fence gets in the way. 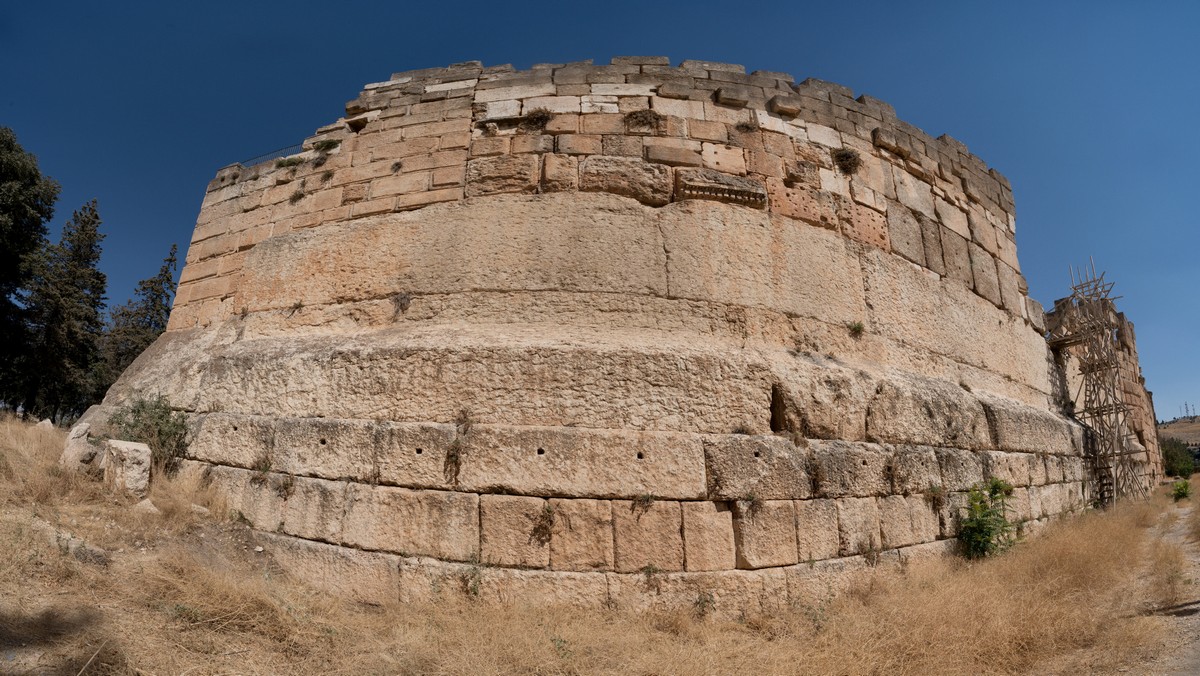 Here’s a pic of the wall’s design (taken from the Russian Wikipedia page on the trilithon).

Aha! I’ve found something to compare with – rather, juxtaposition: the largest stone in the Egyptian pyramids weighs 90 tons. Nine times less than these!

Strolling about these ruins, you come across fascinating details. For example, here – how they brought two stones together:

Clearly these stones were all cut at a local quarry and then carried to the site (where they were placed upon the ancient foundations). Here’s one of those local quarries, where a few unfinished blocks still reside. Like this monster: 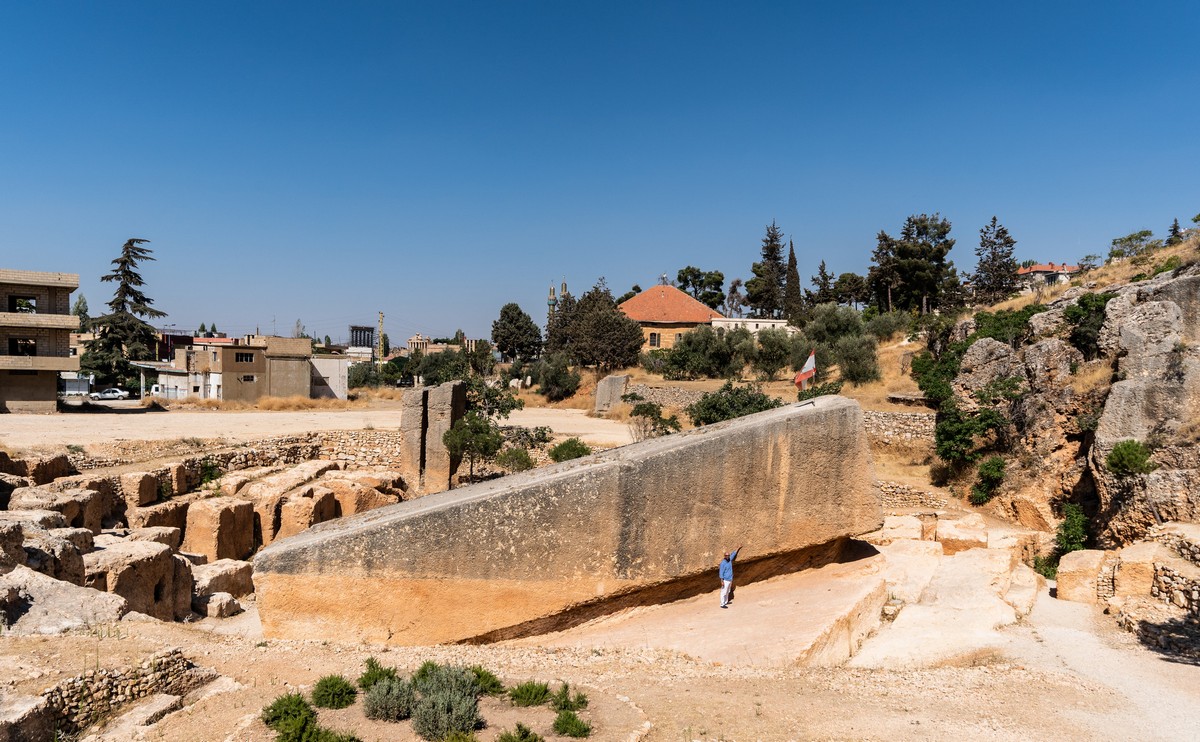 The man stood next to the block is our guide – Mohamad. He’s a little taller than me – 180+cm! And while still on the topic of length/distance: they were planning on moving the block some 900 meters to the northeast -> 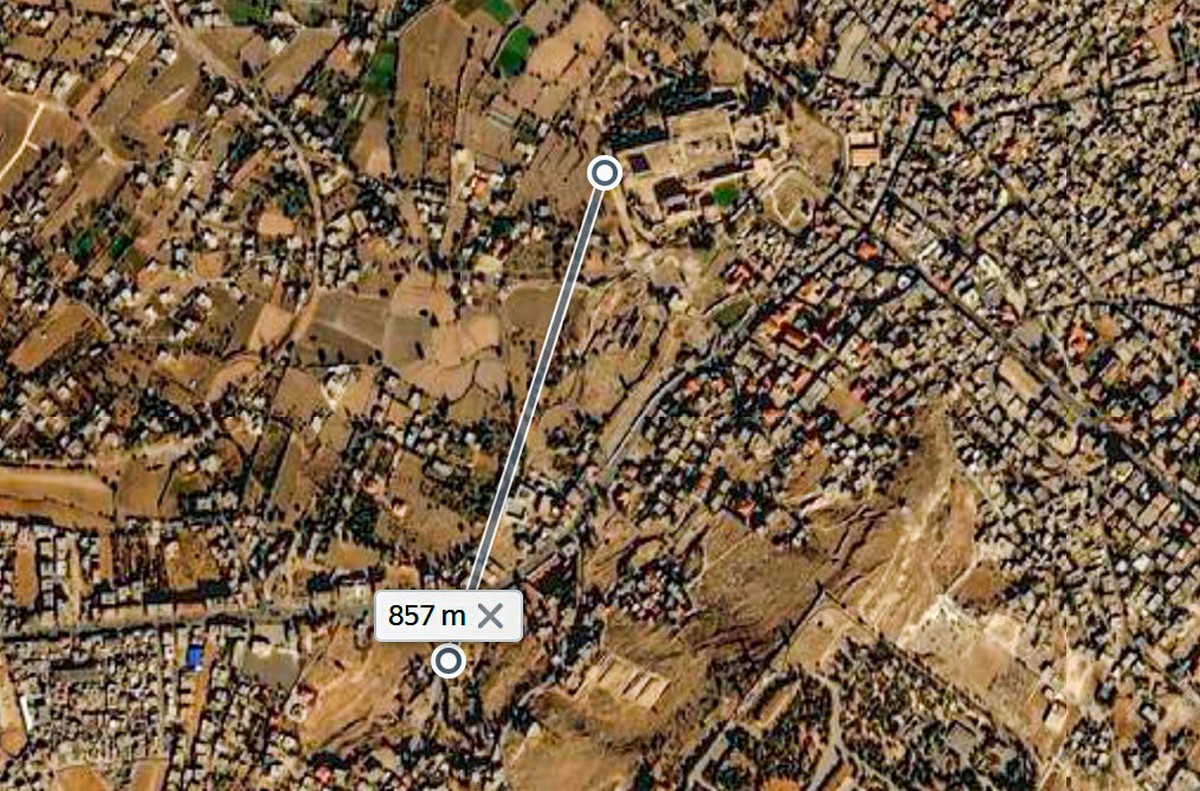 The block is called the Stone of the Pregnant Woman – one of the largest monoliths ever quarried. Shame it never made it to its final destination… 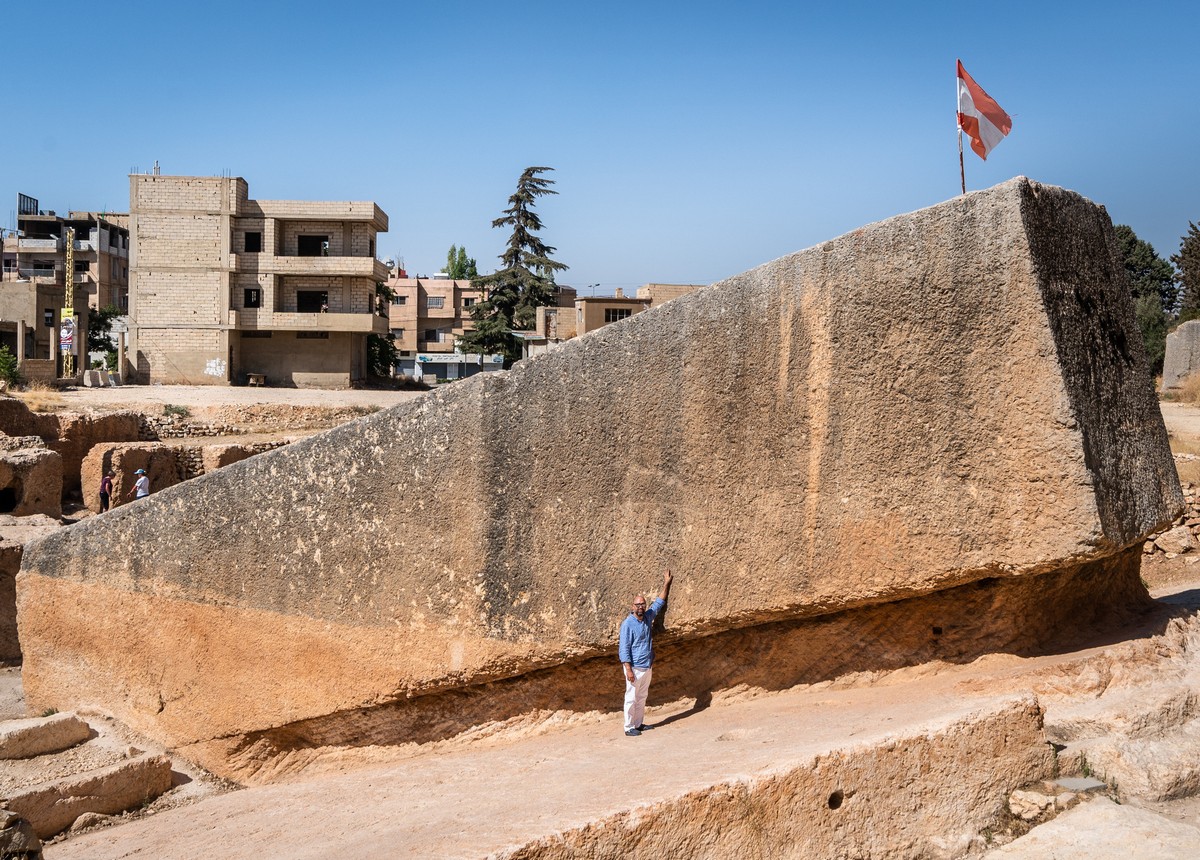 No one knows why the block was never finished and freighted to Baalbek. Yet another mystery…

Imagine how many folks were needed to shift that! Probably on rollers and pushed by thousands (Wiki states capstans may have been used, but who knows really?). So how did they all fit behind it to get their backs into it? ) 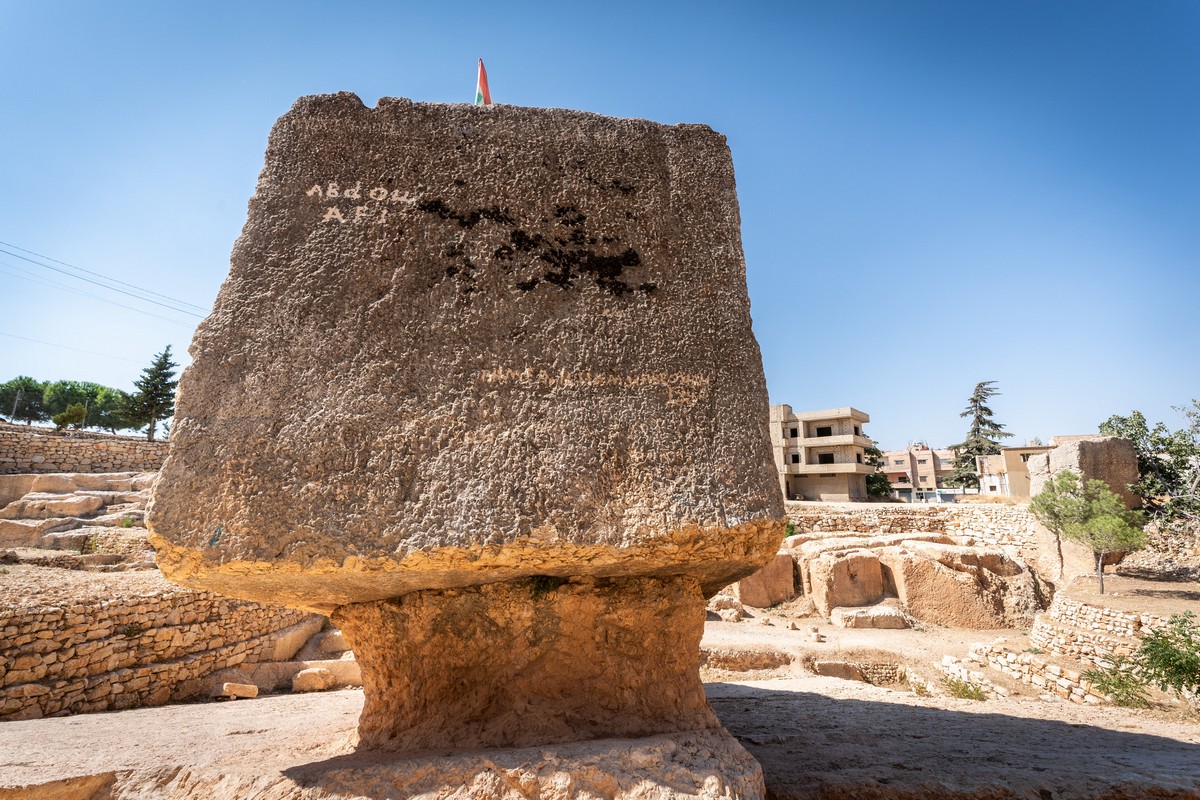 So you think the Stone of the Pregnant Woman is massive? Check the stone next to it, still mostly in the ground… 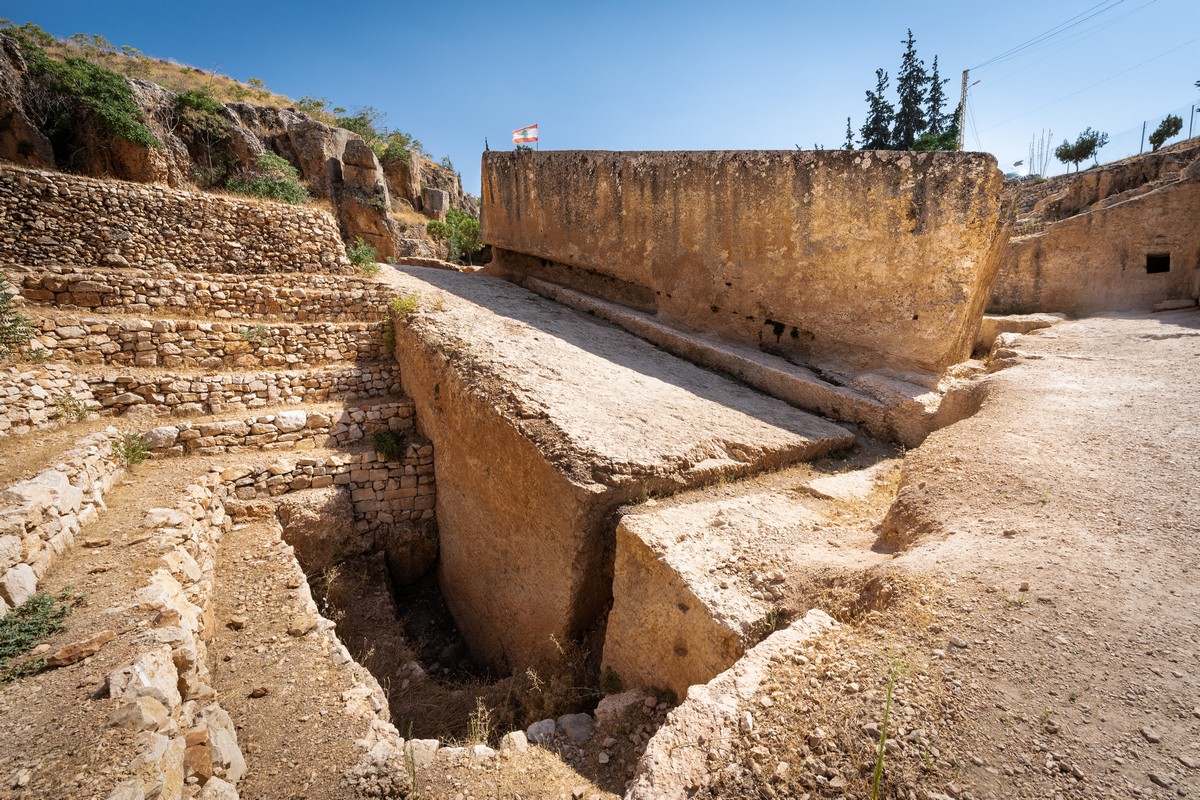 Apparently that one weighs 1600 tons! That’s not much less than the weight of the space shuttle at take-off! That’s Mohamad there again to put things into perspective: 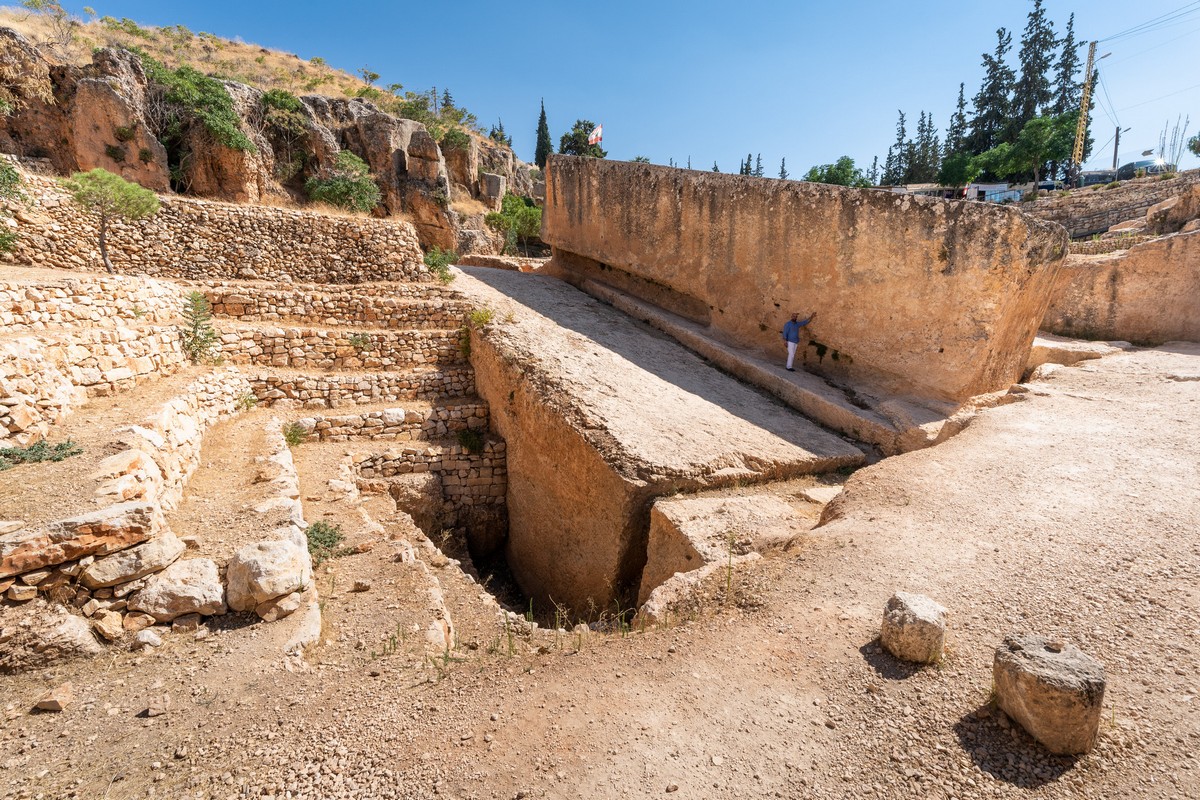 No – better to place Masha in front of the stone. That’s better ).

Btw, this monolith was completely covered in detritus for centuries – until a local removed it all to reveal it. That local owns a café here, whose coffee is really very tasty (I’m no fan of coffee, but it wouldn’t have been polite turning down a cup).

The lower, bigger monolith was uncovered recently by archeologists. There’s another not far away, still mostly submerged in dirt: 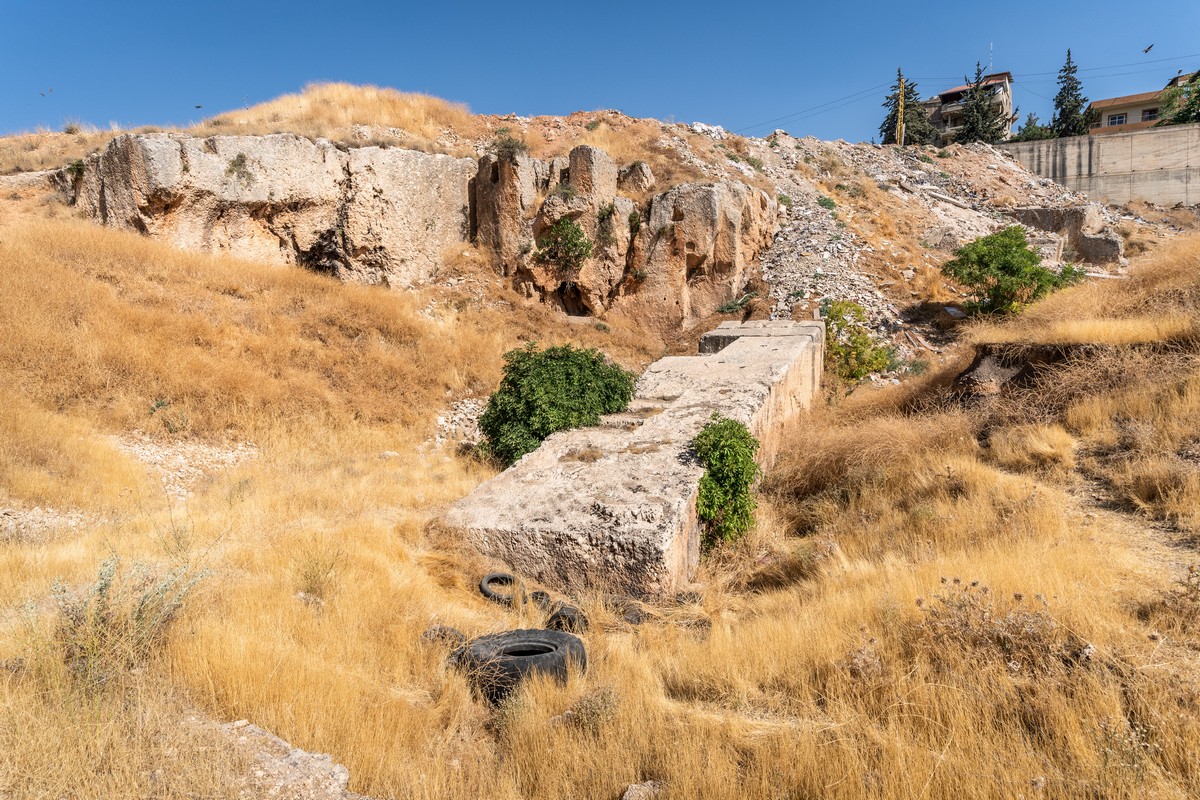 Historical site as monumental as this – and they decide to dump garbage next to it: 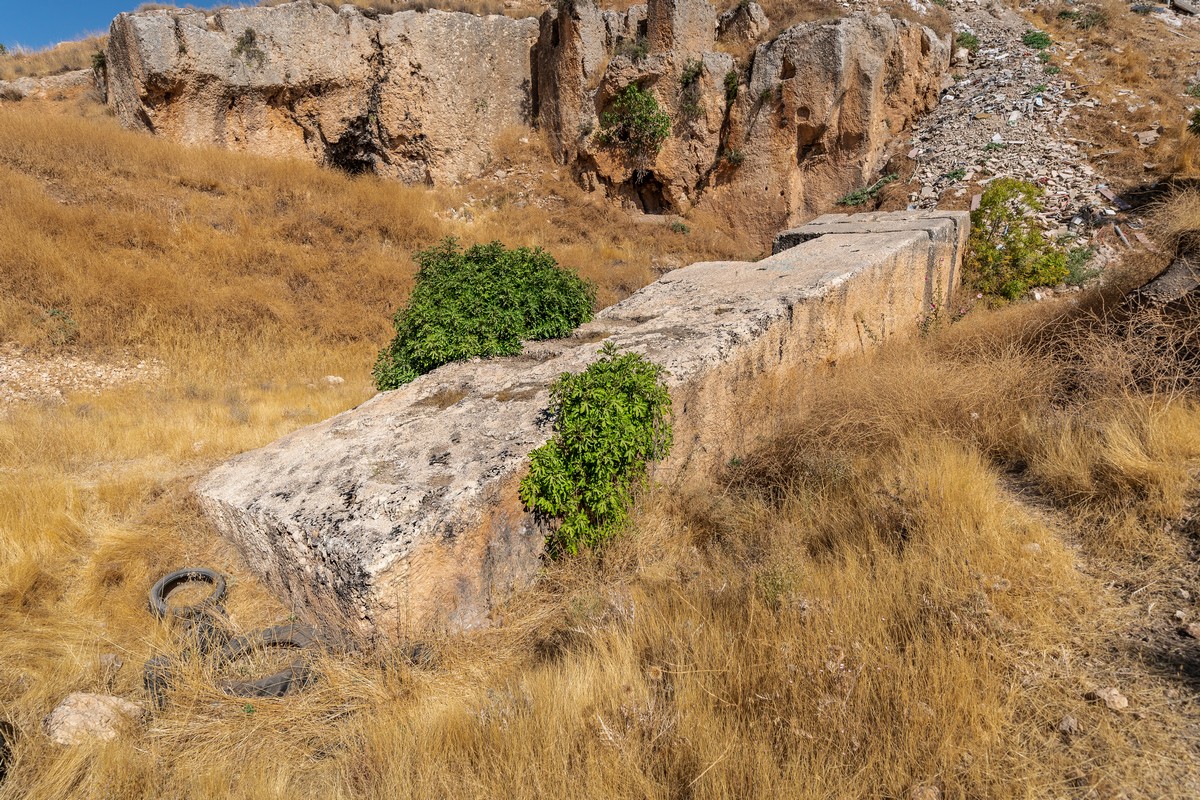 Maybe they’d had enough of the big-block-ism: looks like they were cutting this one up into smaller, more manageable blocks:

I wonder how many other unfinished blocks there are here?

Bas-relief cut into huge blocks for the walls:

The pillars were made up out of several shorter sections – and these holes would have been filled by bumps on the adjoining piece. The limestone wouldn’t withstand the pressure if columns were single-piece: 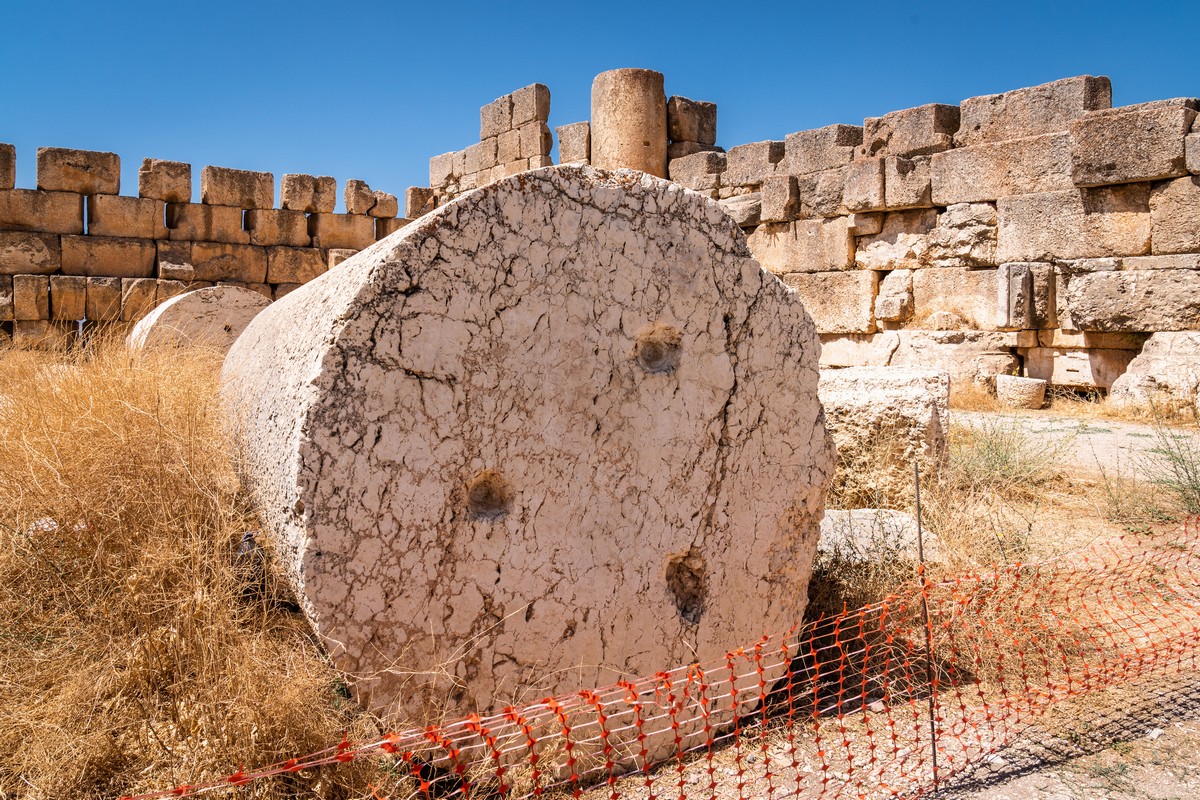 Look how well this relief has been preserved, albeit in just this one piece that’s broken off.

So there you have it folks: Baalbek – a stroll there-around. Highly recommended! 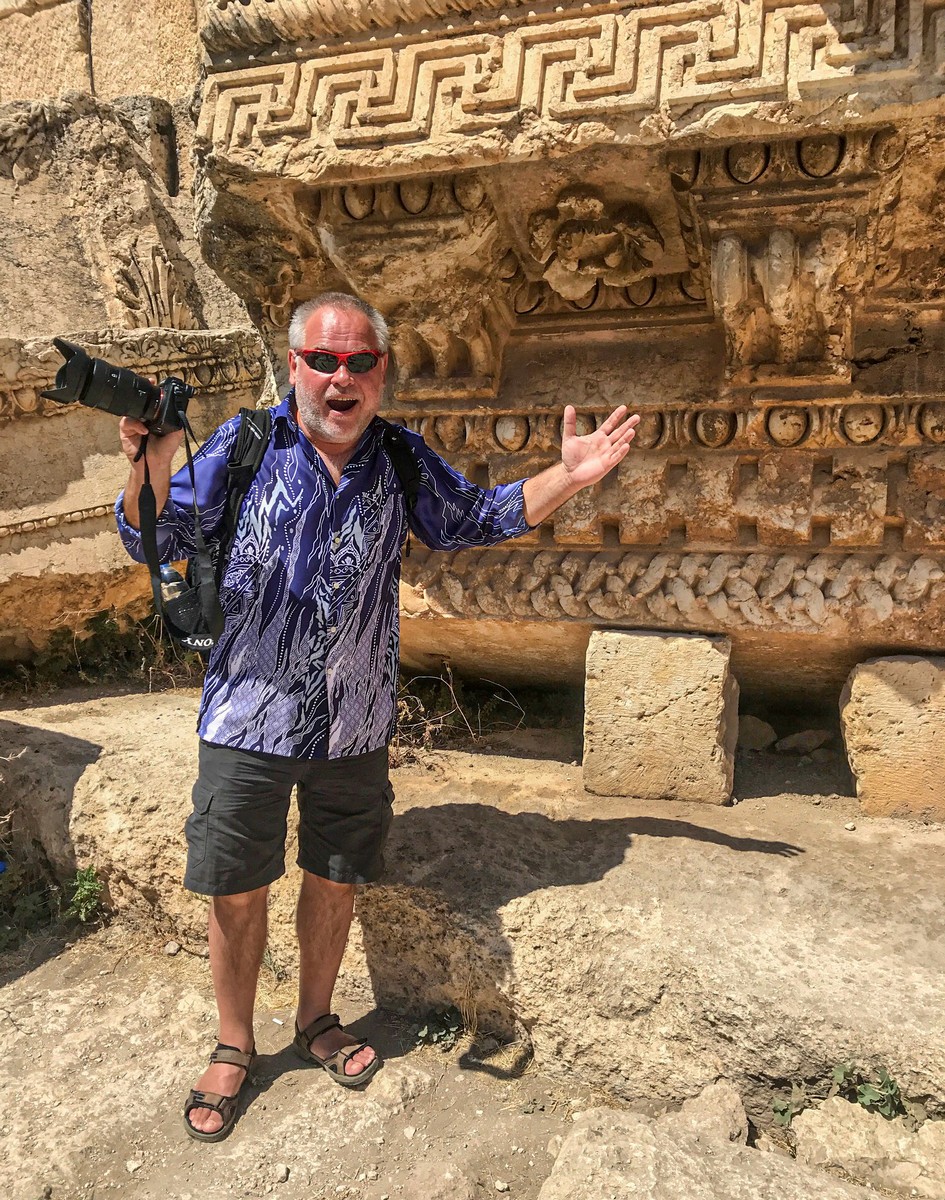 Next up for us was a quick drive over to Anjar, the ruins of the palace of the caliph of Al-Walid I, some 40km from Baalbek. Similar to Baalbek, but built a lot later – the eighth century. 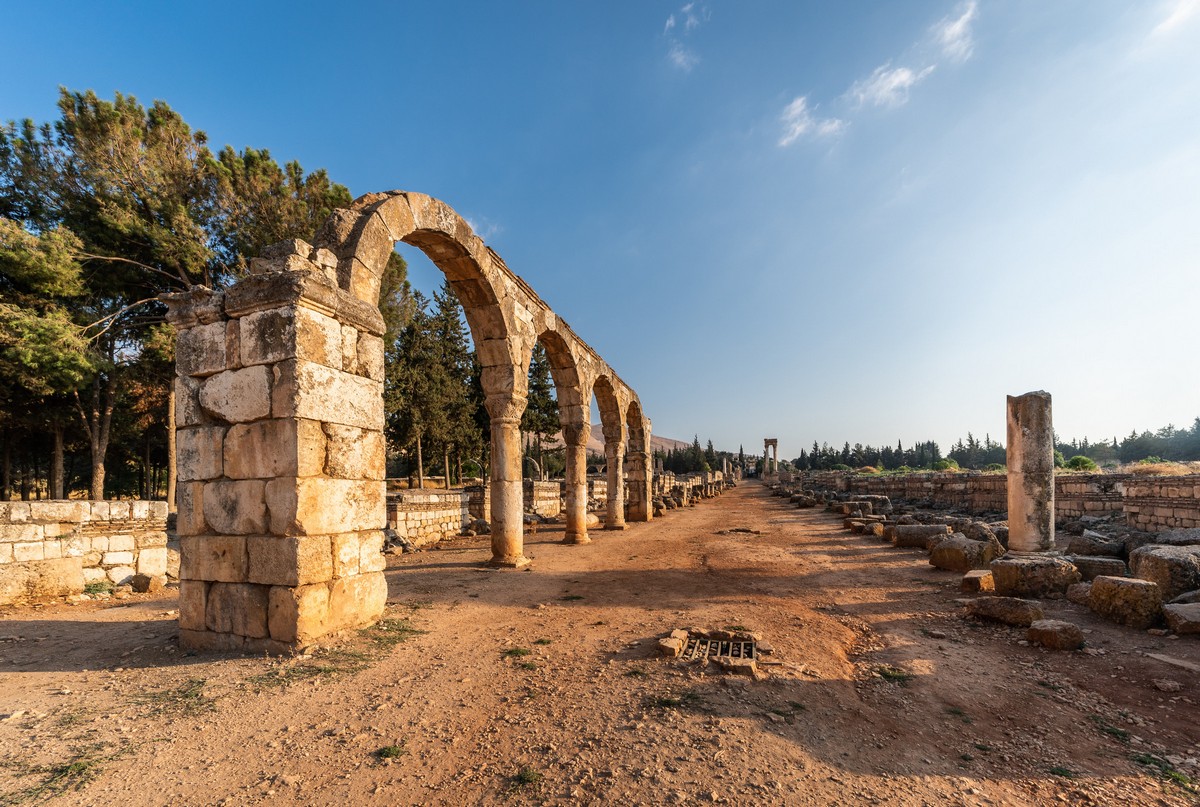 Interesting place. Clearly was a greenfield site: everything planned, designed and built up from nothing. This is the view from up above.

Palace, harem, (Roman-like) baths, and so on:

As a dessert after Baalbek – perfect. Also highly recommended!

That’s all from Baalbek (and Anjar) folks. But I’ll be back tomorrow – from the Kurils again!…

The rest of the photos from Lebanon are here.