Around a year ago, I told you on these here blog pages about an excursion I was given around a gold mine. Down we went deep into the bowels of the earth, where we were shown the whole process of beneficiation through which they extract out of every ton of earth a mere 7-8 grams of gold (which eventually find themselves in a .900 – ~20 karat gold bar).

Now, during that excursion, I recall how we were told by our guides how, though the mine we were in was really quite sufficiently modern, mechanized and automated, it still remained somewhat a ‘diet’ version of a gold mine. If we wanted to see a ‘full fat’ version, we needed to get ourselves… somewhere like this (which, a year later, is just what we did):

Woah. Old-school industrio-mino-vibo. These here tunnels – there are several levels of them, and each tunnel is around a hundred kilometers long! Mini-trains race along them, lifts ferry the ore up to the surface, the ventilation makes a fair racket, water drips everywhere, and right above your head there’s a contact wire. All rather extreme and exciting really.

But first of all there’s a detailed safety briefing, you take an alcohol test (alcohol strictly forbidden), you don your special kit and hat with a torch on it, and grab a self-contained self-rescue device, and off you pop…

…Rather, in you pop – into this here somewhat brutal ‘train’ carriage:

…The interior of which is surprisingly spacious and cozy, with piped music, a swish buffet car, and super views out the windows… ). 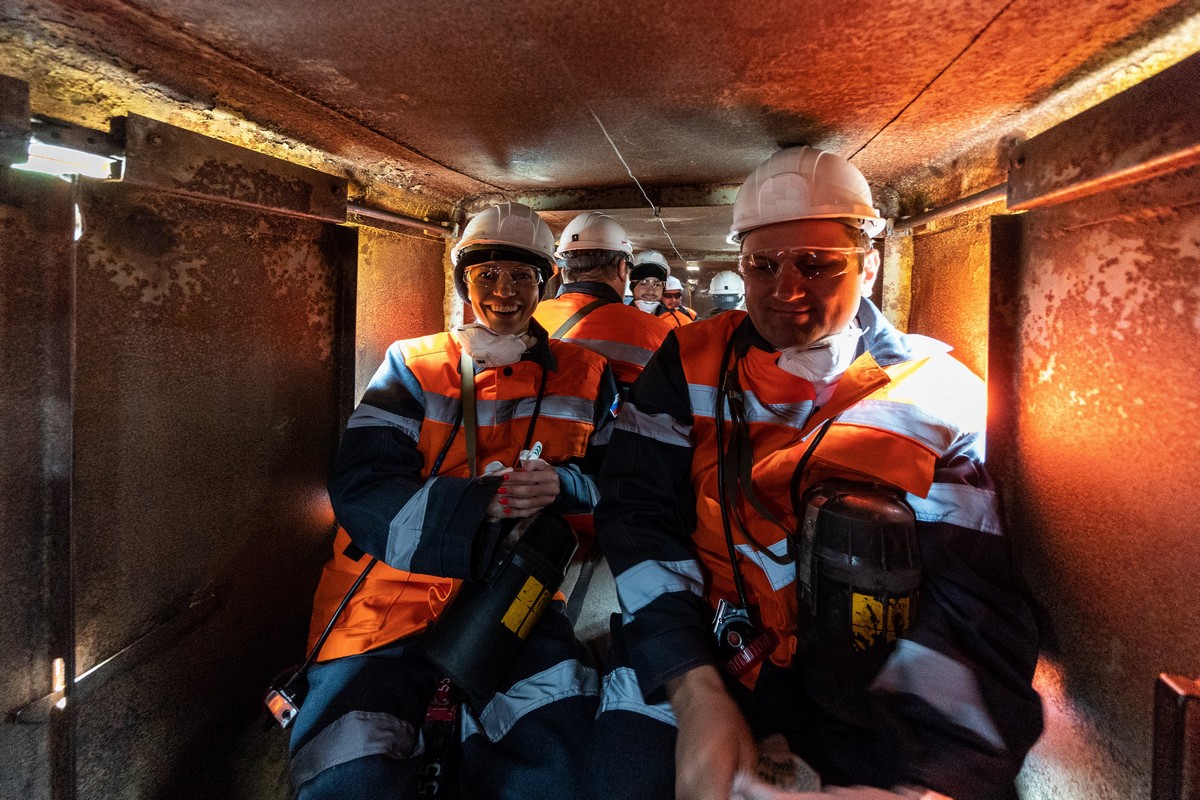 We arrive! A quick stroll along the tunnel, then into the ‘elevator’ – also with Muzak, of course ). Down we go – to the deepest level… 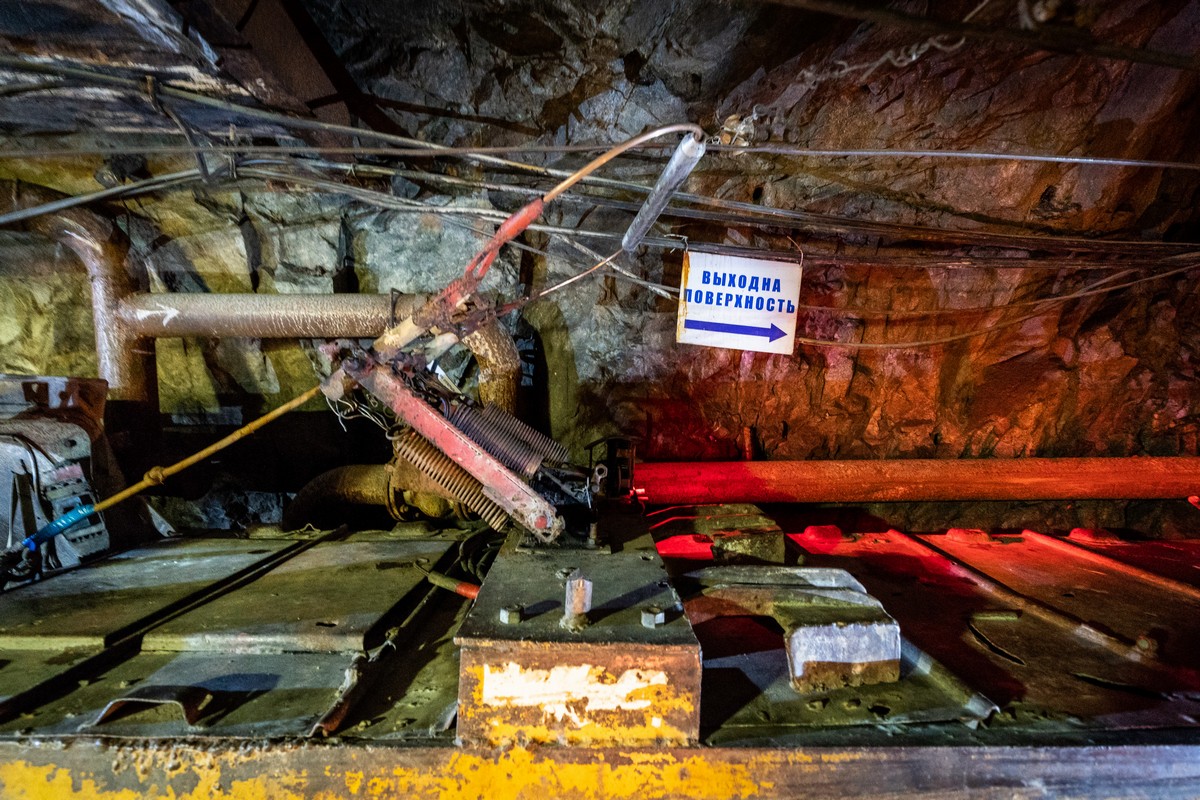 Note the electricity cables above our heads? They’re needed to power the ‘trains’ – when visiting tourists get too tired of pushing them manually, that is ).

And this is the drill used to bore out the rock: 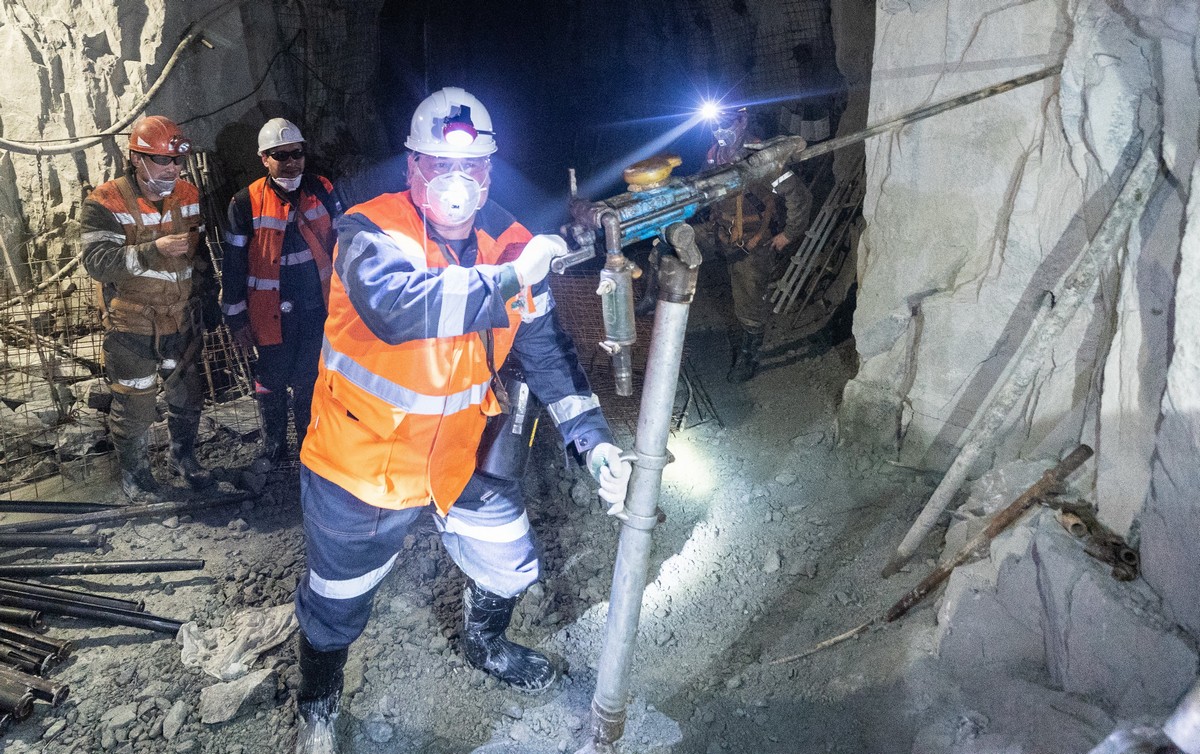 Drills like this were used to bore the 100km-long tunnels. But those are just the present ones. To the side of a tunnel – behind the rock wall – lies former, larger spaces left after the mining of the gold there was completed. Not that we saw those spaces: they’re blocked off completely. But I think one day they’d make wonderful film sets. Hollywood take note!

A bit later we descended further to where more modern drilling methods are used – basically with a huge automatic drilling machine + lots of dynamite + trucks that take away the ore to the surface.

The air here is hardly a summer afternoon by the ocean. More like the Great Smog of London! Accordingly, oxygen masks are needed.

And that was that. Time to head back up to the surface…

Ah: light at the end of the tunnel, literally!

Felt great to be back up at the surface ).

I told you about the process of getting the gold from the ore in last year’s post. Today I’ll just point out the ‘finished product’ workshop:

That’s all for today folks. Back soon… from Sochi!