Our third port of call on our (southeast) China-2018 trip was Mount Jianglang (江郎山), in the Zhejiang province. One of China’s Danxia landforms and a World Heritage site, it has three distinct peaks. Here she is, the beaut – jutting up out of rolling green hills:

And from a slightly different angle:

Besides the ‘trident’ rock formation there’s not much to write home a blog about around here; therefore, I’ll fill this here post with some curious facts and figures…

First off, this tourist attraction is perhaps the perfect example of just how seriously the Chinese take tourism, and how well they set up the tourist infrastructure to (i) cope with the huge numbers of tourists that visit here, and (ii) make the tourists’ experience as pleasant as possible: a large, modern, swish tourist center; dozens of well-organized shuttle buses ferrying folks to and from the attraction – in this case the mountain; everything spotlessly clean; everything well designed and made; + in November, a bonus: practically no folks at all!

We boarded one of the mentioned buses, switched to another bus a short while later – and were ferried up to the mountain. We alighted, checked out the map, and off we popped for walkies…

We’re headed up there:

The paths wind their way between the rocks, then, after a not-so steep uphill stretch, you end up at this here square (hmmm – don’t like vertical pics; what’s more this one has the extra-wide lens on – it was the only way of fitting everything in): 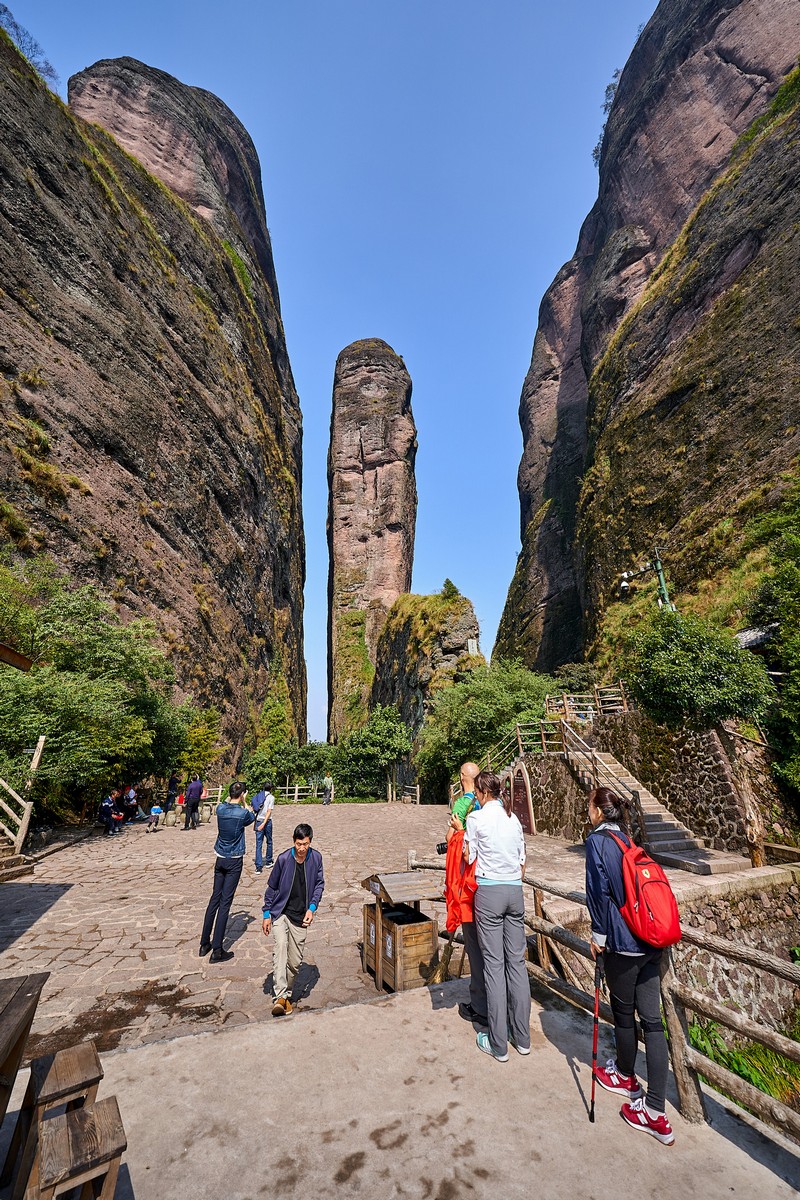 This boulder broke off and fell to its current awkward position a long time ago: 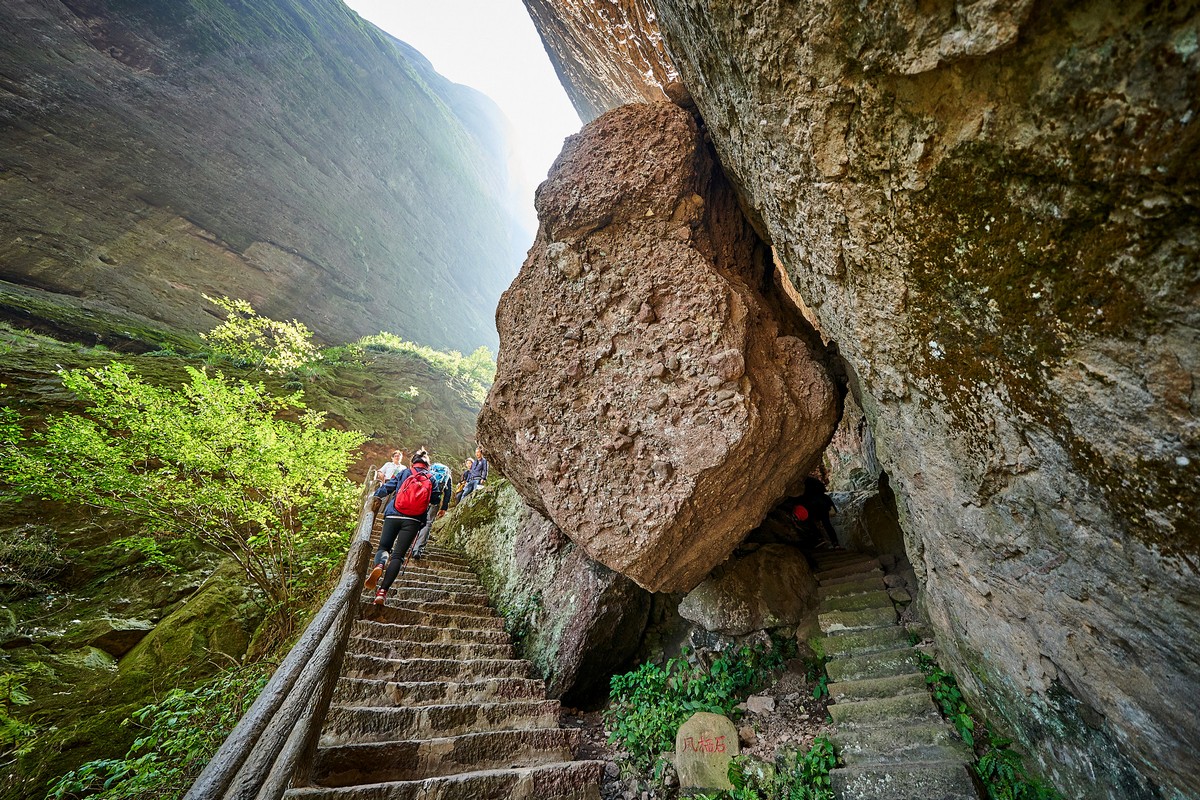 If you look closer at the boulder, you see how it’s made up of small, roundish pebbles – meaning they had to have been ground into their shape by water or ice. This means that this mountain is made up of much older ‘mountain material’ – which was first all packed together, then destroyed; stone fragments were for millions of years worn away by the ocean’s waves or were taken somewhere below by a glacier; then they were compressed together with huge pressure, turned into a single structure, which in its turn was slowly pushed upward by tectonism; then further millions of years of erosion, and finally – voila: this here designer trident construction: 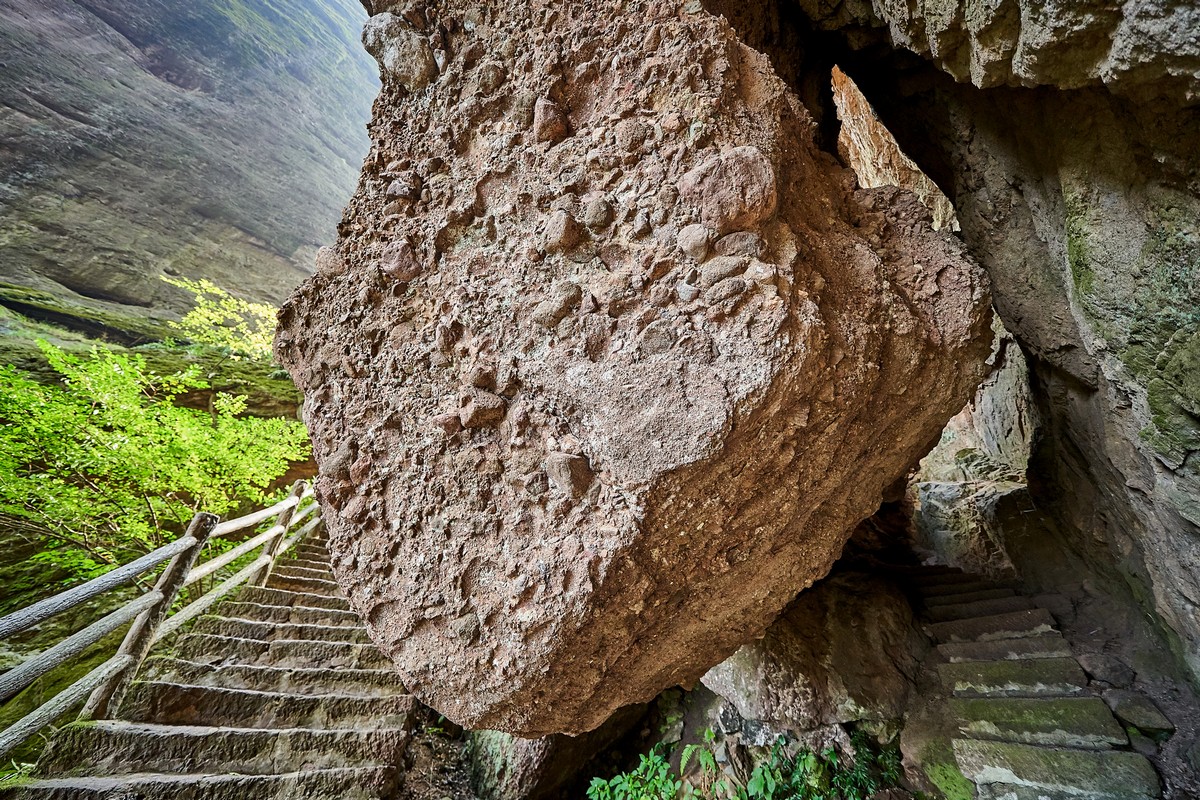 Meanwhile, it was time to return to the square again:

You can go back down via a different path – this one:

Or the other way round – go up this one and down the other, completing a ring round the central outcrop.

Check out the path winding its way up the mountain, and up its neighboring ‘prong’ too…

Up there is the fence up top – but how do we get there? 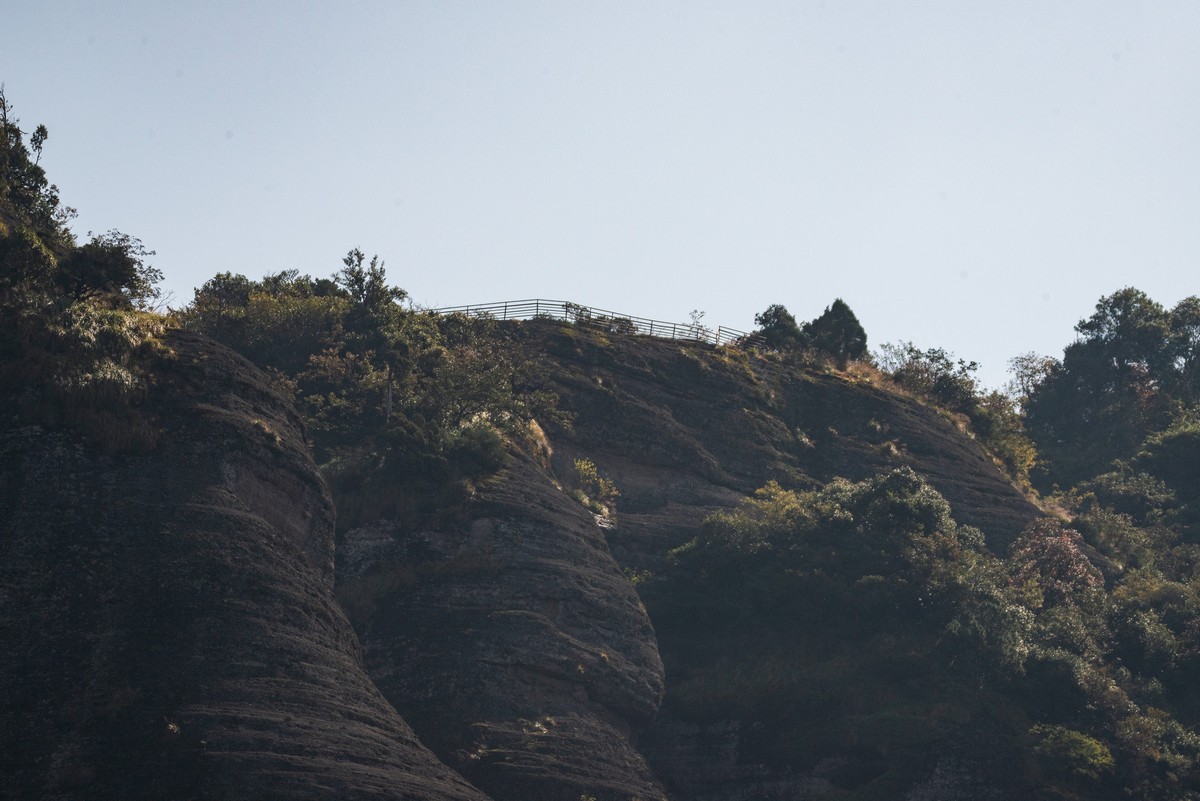 Alas, this season the upper viewing decks are closed. 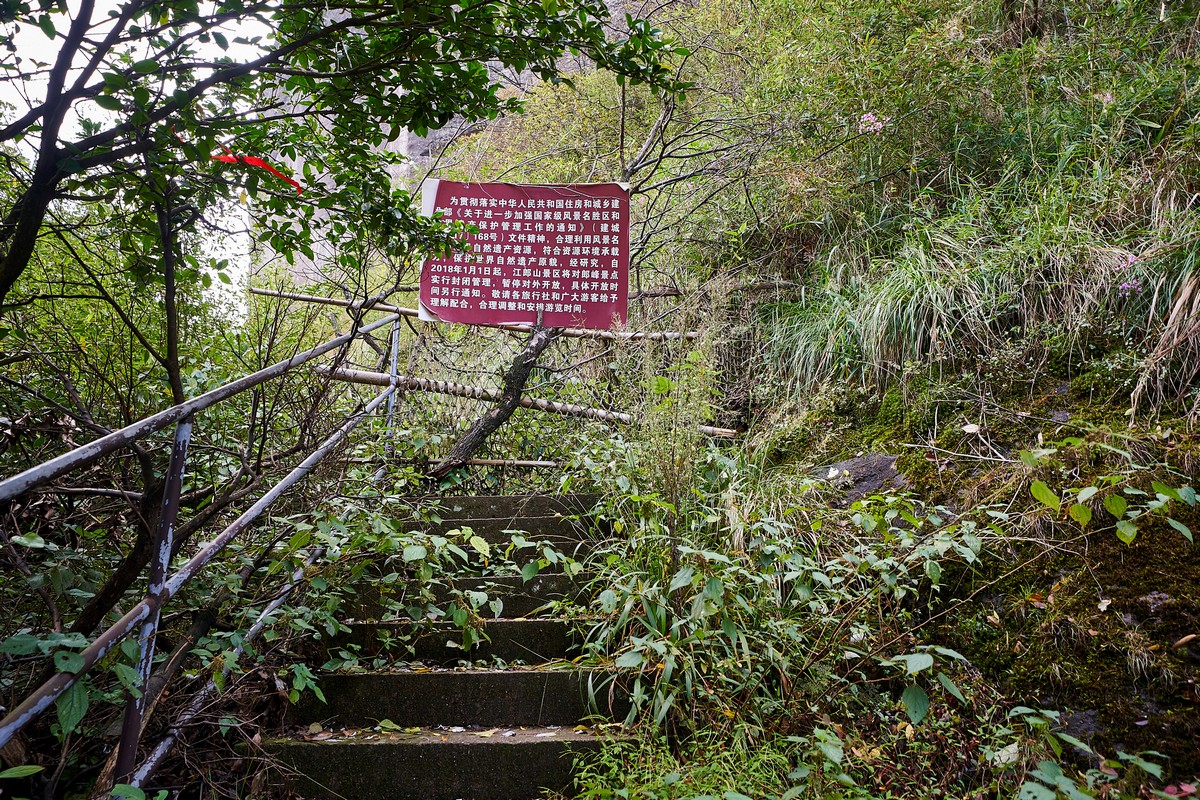 They say that they’ll be opened up soon after repairs; once they are, it’ll be possible to go right up there:

Wow. Hypnotic scenes. Really want to get up top! 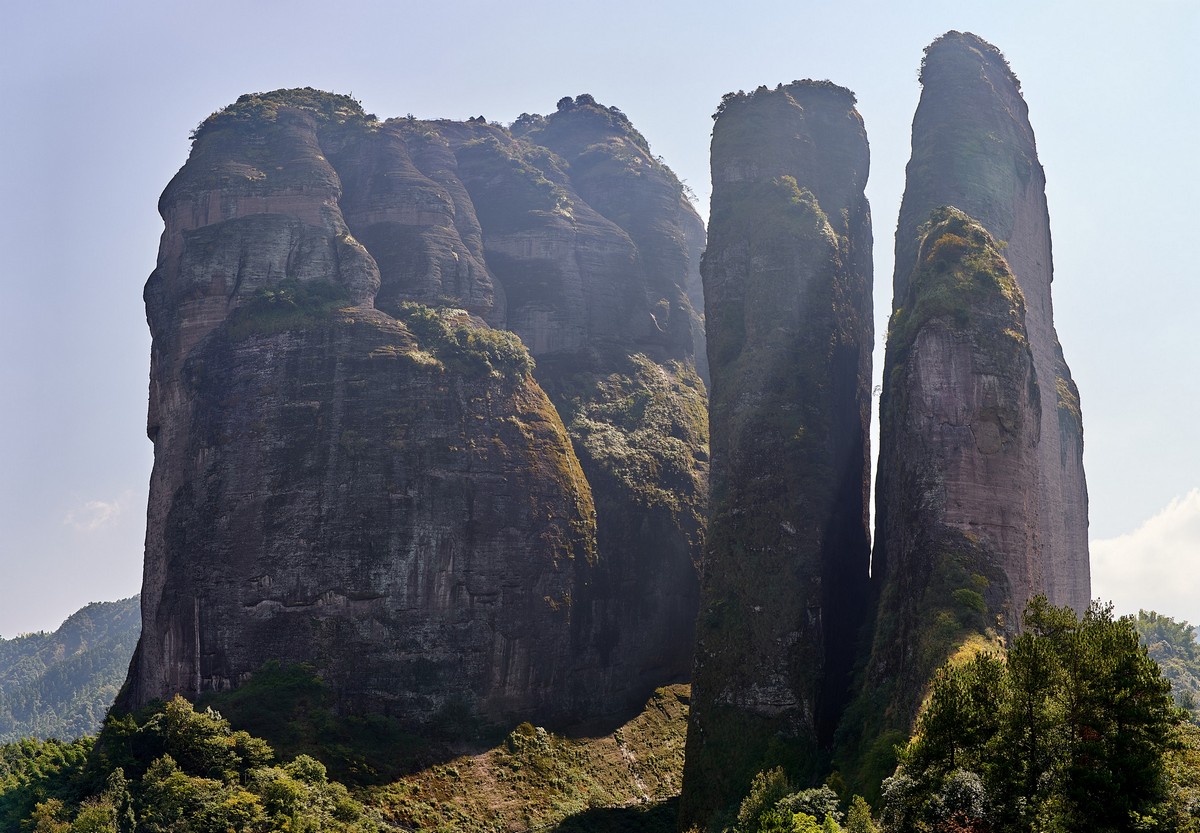 But it’s only crazy folks get up top; even crazier folks jump off the top and down the narrow space between it and the little prong. Not often though: the last time someone did was in 2013, apparently.

Next up, we were headed for that viewing platform over there:

Wow – it was worth the trek over to it: the views were spectacular, especially as the sun was just right for our happy-snapping. I guess the sunsets here are similarly spectacular. Hmmm, will just have to come back to check one out – after they open the mountaintop viewing platform.

If you fancy getting here btw (only via road or rail – no airport), two or three hours is more than enough for a full inspection (that’s if the mountaintop platforms are still closed, if open – add another two hours). You could also add an extra hour if you walk along the lake instead of taking the bus.

And that was that – our first Danxia landform of our China-2018 trip. But it was only a warm-up really: what was to come were yet more natural unique beauties of ever-increasing awesomeness. So don’t go far away folks, and I’ll be back with more tomorrow…