Throughout human history there have been many interesting moments and fascinating stories. Out of all of them, I reckon one of the most amazing is the story about how homo sapiens settled on remote islands across the Pacific.

Around two or three thousand years ago, from the shores of what is today Papua New Guinea, they sailed in the simplest and tiniest of boats, generation after generation, century after century, to populate island after island, apparently even reaching the shores of South America – 15,000 kilometers away!

Archeological research of this great eastward emigration is a little unconvincing so far, and anyway, surely many of the traces of mankind from back then will have been washed away or submerged under the rising ocean levels and lost forever. However – hurray for the geneticists! – modern-day investigations scientific alchemy now give us a detailed picture of the timing and direction of the two main branches of the eastward exodus and building up of the populations of Oceania. 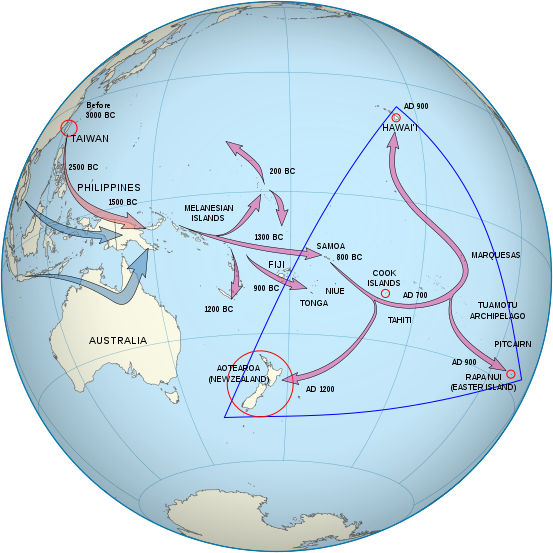 The first wave of migration (a quick glance at trusty old Wikipedia tells me) took place some 30 to 50 thousand years ago from southeast Asia via modern-day Malaysia, Indonesia and Papua New Guinea, to Australia and the islands of Melanasia. Now, I’m no anthropologist, but something tells me that back then they probably didn’t need a boat to get to Vanuatu or even Fiji – they could have walked, or paddled ). The sea level was much lower then than it is today, and the ocean never gets that deep round these parts (as you can see on Google Maps) anyway. I reckon they didn’t make it further to Samoa as they weren’t sailors.

The non-sailing migration scenario of the first wave appears to be backed up by the deemed-scientific-fact of land-based migration of prehistoric man from Siberia via Beringia to the territory of North America.

Anyway, back to the eastward movements down in the southern hemisphere… the level of the ocean rose and cut the settlers off from the other territories. What’s interesting is that the population of Melanesia is dark-skinned, just like the Papuans from Papua New Guinea and the aborigines of Australia. And without any genetics at all there’s more than a hint of a close blood connection between those peoples.

What’s most interesting of all is the second migratory wave, seeing folks leaving today’s Taiwan and heading toward the Philippines and further east. That migration started around four to five thousand years ago, only to stop some thousand years ago. On the map above this is clearly indicated.

Off they sailed on primitive (if compared to today’s vessels) boats across the open seas with no compass and no idea at all of where they were going (or could they have known, and we just don’t know how? (see below)) and eventually they came to and proceeded to settle on all the islands of today’s Oceania that were fit for habitation.

Probably, the first sailors were (brave!) scouts – who went on reconnaissance missions. Months later they’d return, load up their boats again this time with their wives, plus pigs, dogs and chickens (these were the only animals they had), and provisions, and off they sailed again. En route they caught fish, somehow got hold of fresh drinking water, and even used stoves to boil and fry their meals. (See, they and their boats may have been ‘primitive’, but could you imagine  homo sapiens of today pulling off such a feat?!)

Btw: since it was almost exclusively fish on the menu on their journeys, they didn’t take any herbivorous animals with them.

Btw-2: the proa sailboats of the Polynesians were noted for the high speeds they were able to reach – up to 25 knots: faster than European sailing boats at that time.

So how did they manage to navigate the world’s largest ocean in search of islands to settle on? Like I said, no compasses. Instead: the stars, the sun, tracking the seasonal migratory habits of birds (who, incidentally, know a thing or two about no-compass navigation:), clouds (big, high ones which normally sit above/near mountainous islands), and the reflections of green waters of lagoons up on the clouds (Google Maps not needed, thank you!).

To this day there are Polynesian families who still have these extraordinary navigation skills passed on down the centuries – and still put them to use, for example by sailing in small boats from, say, Hawaii to Tahiti and back. That’s 4000 kilometers each way folks; a couple weeks getting there, a couple getting back! No GPS, no Glonass. No sextant, no astrolabe – because they never learned how to smelt iron! And that, btw, is the reason James Cook died. The Hawaiians stole one of his boats for its nails, which were highly coveted. The British were having none of this and attempted to kidnap the Hawaiian king. The Hawaiians were having none of that so stabbed Cook to death. But that’s a whole other story.

Anyway, these were the thoughts I was having as we approached the Vanuatu islands, another volcanic archipelago of Oceania.

We landed at Santo-Pekoa airport: 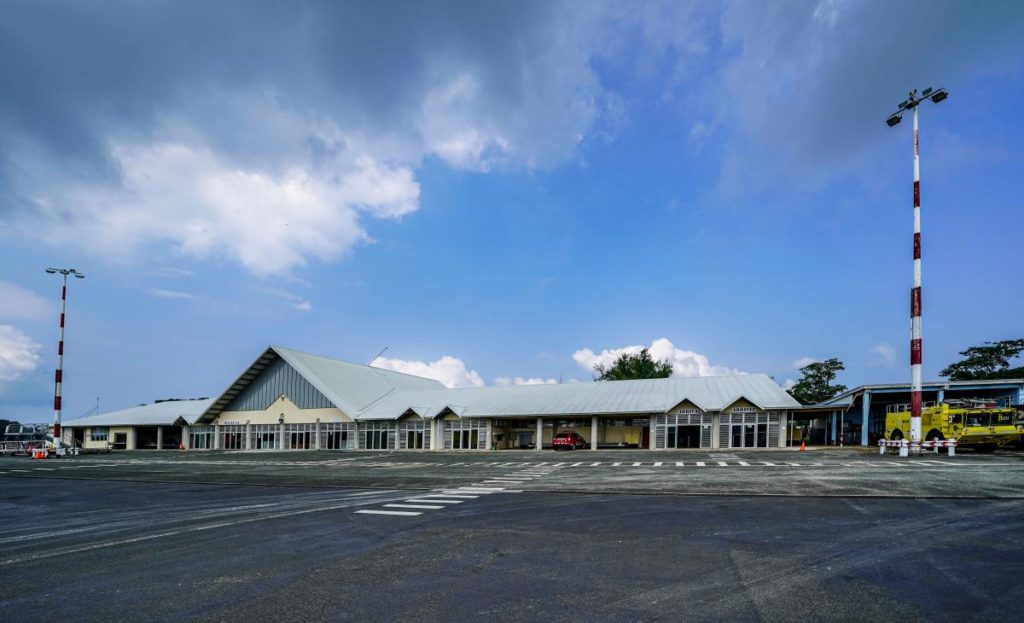 We couldn’t find any signage on the terminal stating the name of the airport, so we had to make do with a pic of the airport’s fire engine (which did indicate the name).

They say that many of the locals don’t even have modern basics like electricity. When they’re hired to work at hotels, they often need to be told about electric plugs and sockets, and that electric shocks are very painful!

All the same, the place is no less beautiful for it, just like with all the rest of Oceania:

And that’s about it for my tales from the Vanuatu side.

All the Vanuatu pics are here.

PS: As per tradition: how to get here… 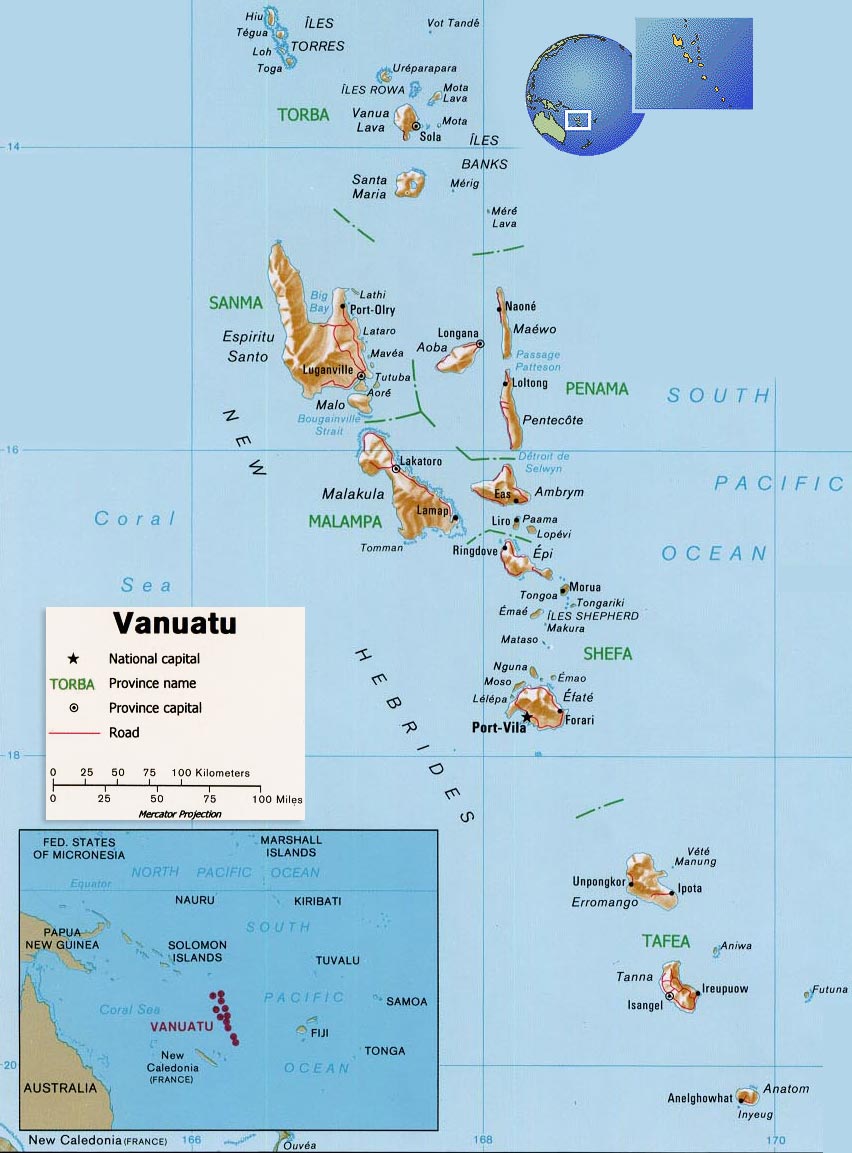 There are direct flights from Australia (Sydney and Brisbane) and New Zealand (Auckland), but that’s about it. Ah yes… also: from neighboring Fiji and also New Caledonia and the Solomon Islands (both also neighbors). But that really is it.

And on that closing note I shall finish. And with this closing sentence I sign off on my mini-series on French Polynesia/Melanasia. Thanks for your time!…