Onward we march on our Indonesian ‘volcation‘. Next up: Ijen – our sixth volcano in as many days. Not a bad result considering all the necessary short flights and driving (on not the best of roads with not the best drivers in the world) to get from place to place. We managed it by being on the road by day, and doing the volcano climbing by night. To some that adds up to touristic masochism. To us: tourism at the correct tempo ).

Ijen was no less pleasing than the other volcanoes. This one’s particularly awesome features: a bright turquoise crater-lake, powerful fumaroles, and bright yellow air sulfur resin and smoke…

Its least-awesome feature: it’s rather hard to breath up there – especially at sunrise and if there’s no wind. It’s more like a gas chamber than open countryside.

Taking a walk down into the crater is made feasible by the sturdy path provided. Not only do tourists use it, but also the workers for carrying up their mined sulfur from the crater.

Down in the crater it was a hive of activity with workers all around going about their tough physical labor, but I’m really not sure how they manage it: you can’t breathe down there! The gases from the fumaroles scratch at the throat and sting the eyes. Some of our crew gave up attempting to tolerate such a high concentration of contaminants in the air in no time at all: ‘only with a gas mask on’, they uttered as they swiftly climbed back up the steps they’d just descended (to then proceed to have a cigarette or two; no really: those who went back up first were all smokers:).

It probably goes without saying I was one of those who didn’t evacuate quickly. Well, I soon found out that the admittedly unpleasant breathing conditions are only temporary. After a while a gust of wind comes along to blow the gas-attack away. Until then, if you’ve a damp cloth over your mouth, and you move at a slow pace, or – better – stay seated so your breathing’s not so heavy, it’s quite bearable. Still, these guys who put in a full working day, and with no breathing apparatus or damp cloths on their mouths – surely that can’t be good in the long term for one’s lungs. Poor things. But before my spirits became too gloomy contemplating their plight, along came the aforementioned wind to blow the acrid gases – and my melancholia – away…

What can I say? Down in the crater it’s… unusual, for sure. But it’s still interesting and charming, and a surprisingly pleasant experience – eventually ).

All the same, if I’d come here again I’d come with a gas mask or face mask. I’d also come when it’s dark. Apparently there are natural gas emissions that are bright blue colored that are only visible at night.

Back to today though, that was it for us: time to climb those steps back up to the fresh air.

And here’s another reason to come at night: so as not to see signs such as this:

Btw: that’s no cloud; it’s smoke from the crater, rising up to cover the whole scene when there’s little wind.

Phew – back to the top and relatively fresh air. 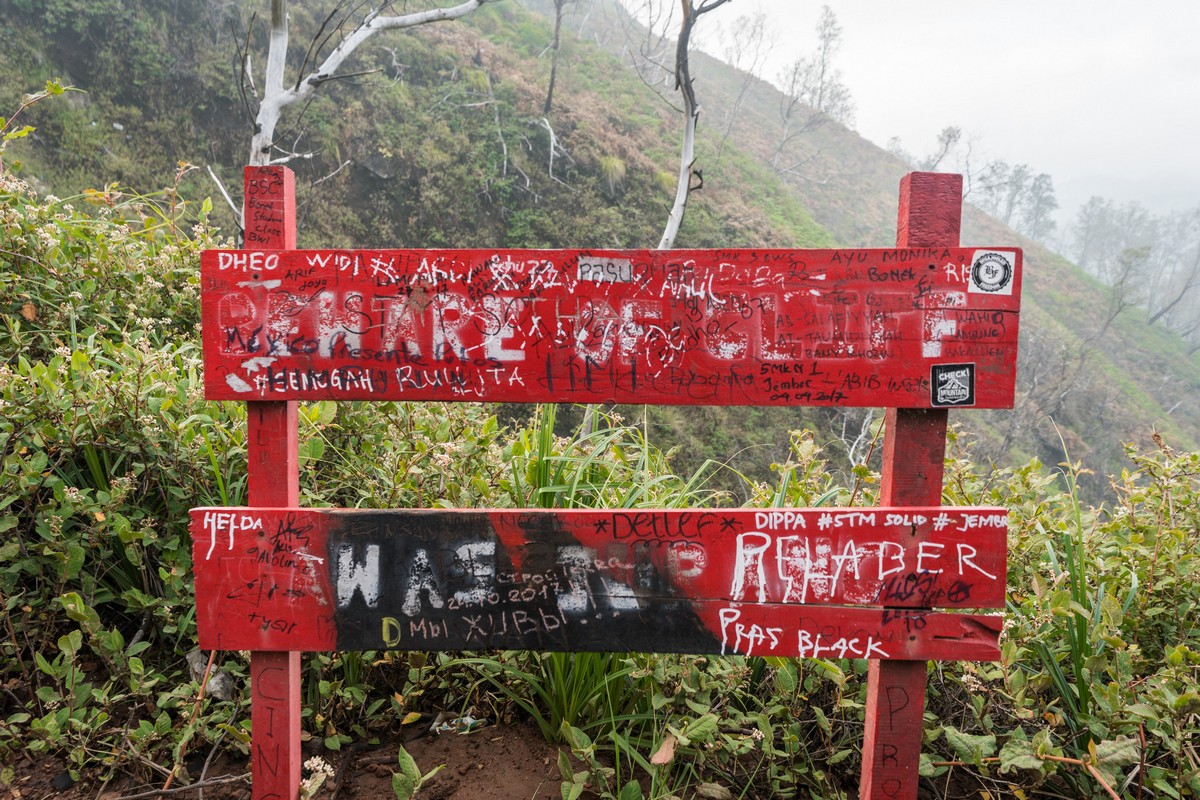 Btw, if you look carefully on a satellite pic of Ijen you see that a path runs right round its rim. But after having our lungs filled with toxic gases to varying extents and already having walked a fair bit – including up and down lots of steps – our group democratically voted against a walk along it. I was happy to go along with that this time ). 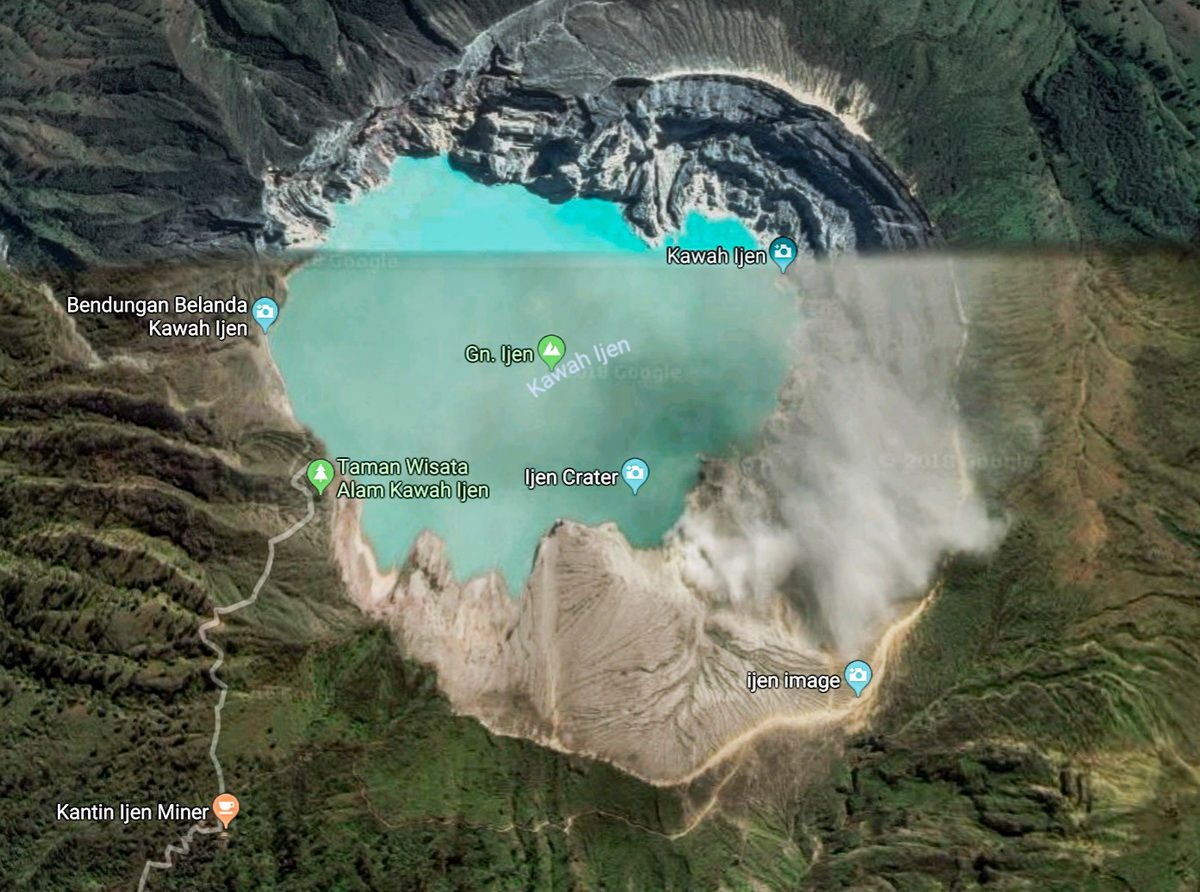 There’s sulfur everywhere here: in the air, in big chunks in baskets, and also on souvenir stalls:

Now for a little technical data, as per tradition.

Much like our previous volcano, this one’s a cinch to scale too. You get up to around three kilometers from the crater by car, then there’s a real good track lets you walk the rest at a steady pace, which takes an hour-and-a-half to two hours to get to the very top (2799m), while the ‘crater entrance’ is a little lower down.

If you don’t fancy the walk, you could always be ridden up the volcano – in a ~rickshaw! 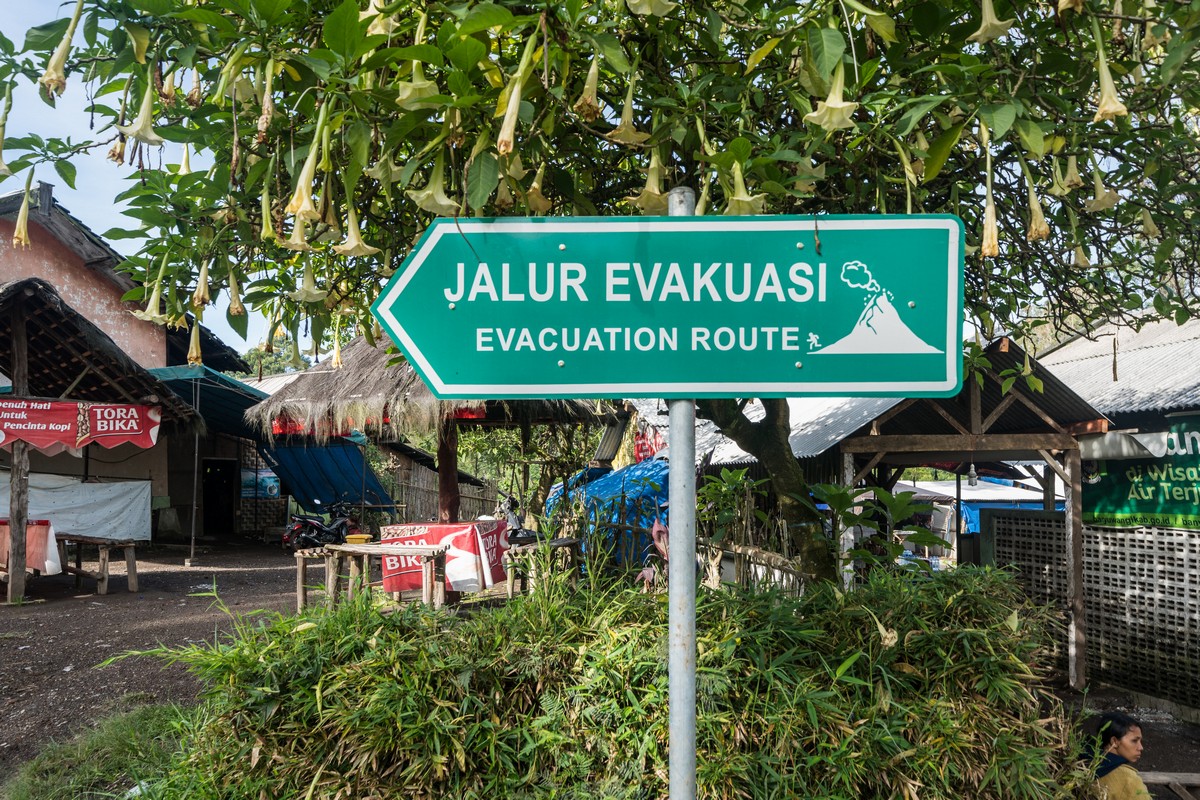 Btw, we stayed at a very nice – though lacking in Wi-Fi – hotel called Ijen Cliff Resort, which is around an hour’s drive from the volcano. I say ‘stay’, but it was only a ‘half-stay’ really: we were up at 2am and were heading out for our next volcano ascent by 3am!

The view right from the balcony there was really something: 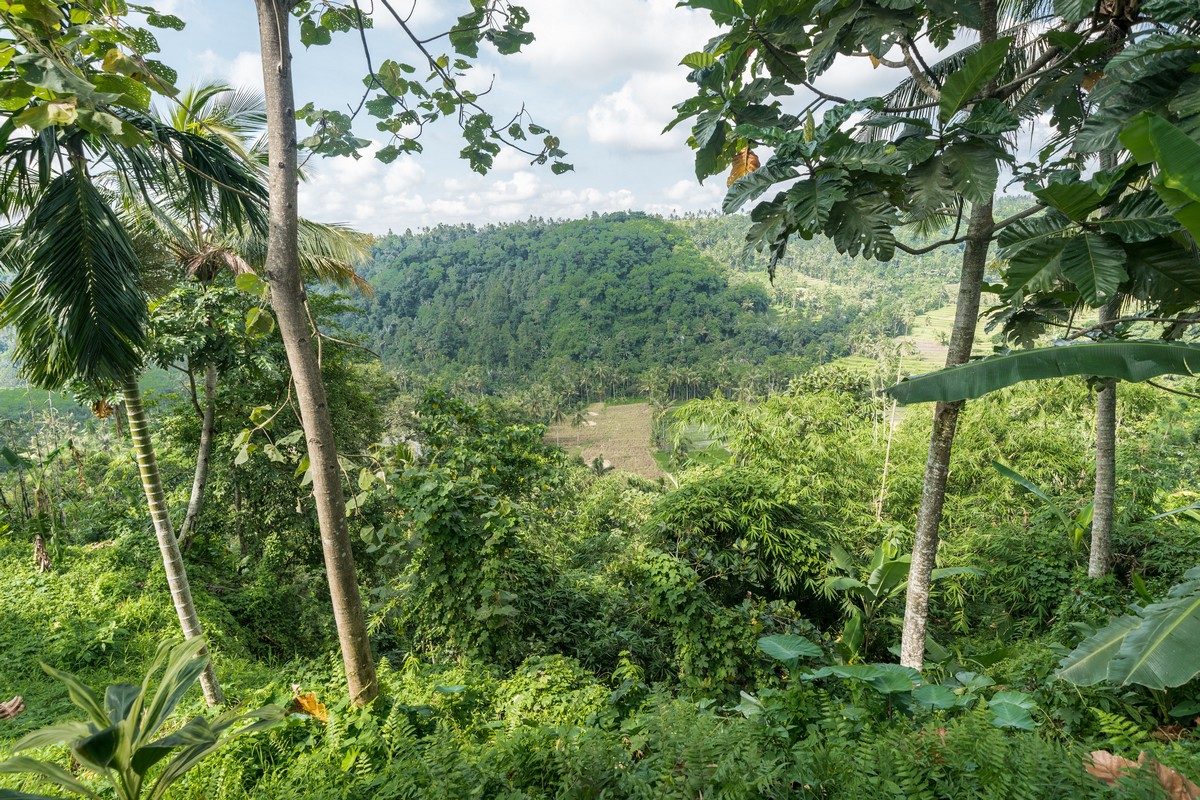 And that was Ijen folks – all done and yellow dusted ).

The rest of the Indonesia trip photos are here.

PS: Can you guess what these here installations are?

I’ll give you the answer tomorrow!…