Herewith, more tales from the Danxia side. One more key mountain needed checking out – Bazhai. Here she is:

And up there – marked with the red arrow – is where we’re headed today:

And here’s the mountain – teapot – just opposite: 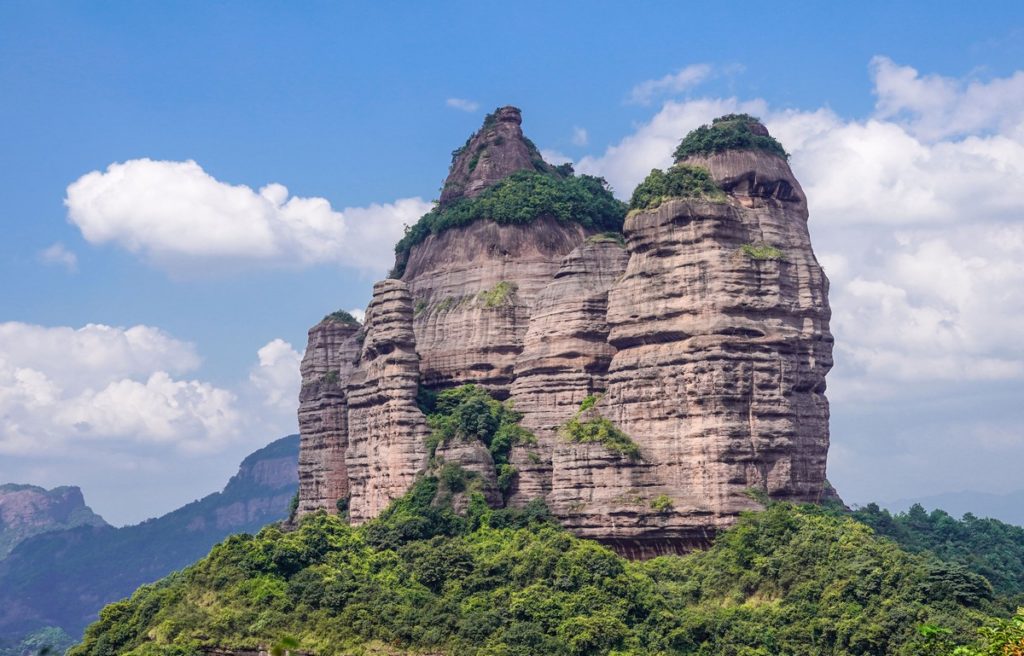 Got to take my hat off (and bow) to the industrious Chinese here: the paths that crisscross these mountains are examples to the whole world of how paths should be laid. Perfect paths :). 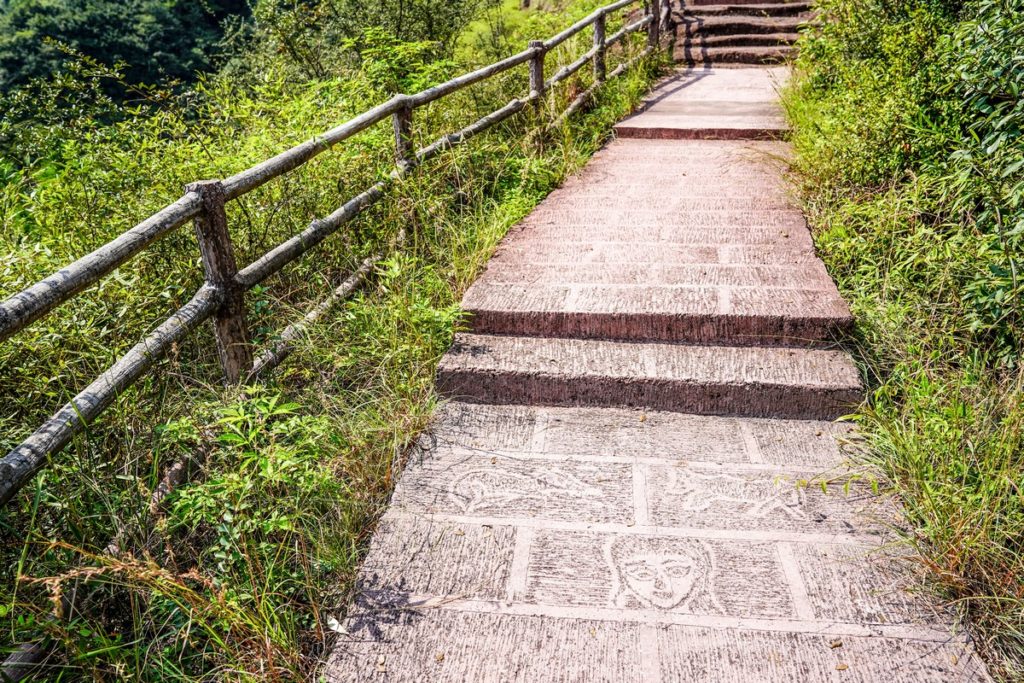 Still about these peerless paths: they come in various shapes and sizes: some are of neatly poured concrete with the odd artistic flourish imprinted on them; some are cut into the rock face; some are paved with bricks or cobbles. None are mud tracks or some other such disgrace. All with fences, hand rails, chairs, tables and other such conveniences – also mostly of concrete, but with the odd skillfully placed bit of wood sheeting of other natural materials. And the quality doesn’t trail off the remoter you get: the standard’s equally high everywhere. I mean – even on the Bazhai routes: no difference. And Bazhai really is relatively quiet: we only saw four other tourists on the whole route there and back. That’s right: four! Not 4000, not 400, just 4! At least – it was quiet the week we were there. Like I’ve mentioned earlier, the week before – during Golden Week – I’m sure was very busy (including judging by the colossal sizes of the parking lots and tourist information centers and the great many souvenir shops and cafes and restaurants.

Normally the stroll to Bazhai would be an easy, relaxed one – if only it wasn’t so darn hot and humid. Your clothes get soaked through almost immediately! Not the most comfortable conditions to walk in, but what could we do – we had to plough on regardless: we had our planned route to stick to!… 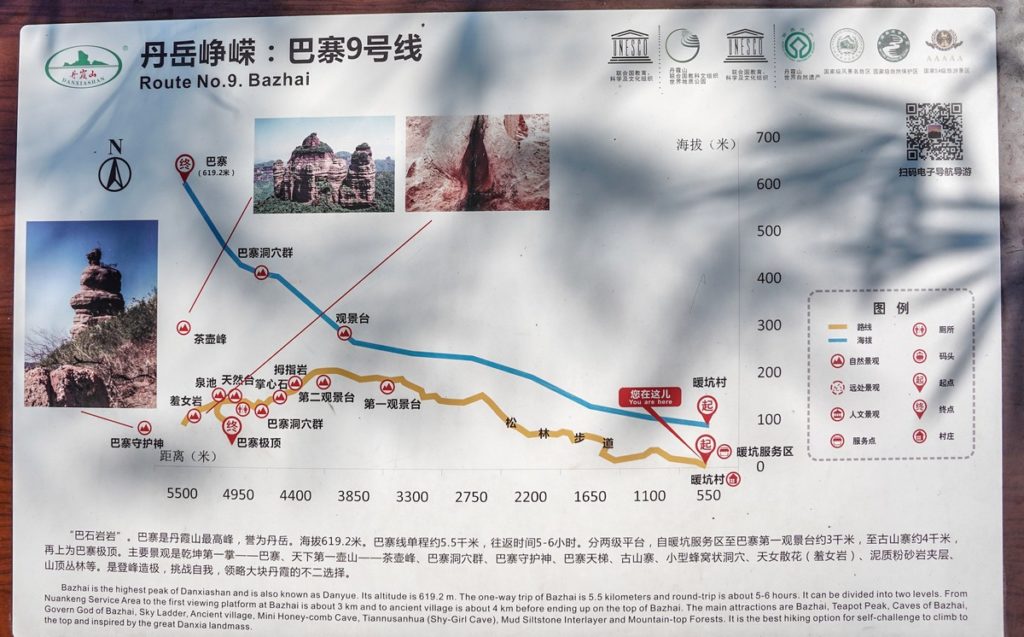 Here’s the path we were on:

What was odd about the weather was how it was oppressively hot (35°C) out in the sun, but not at all warm in the shade. I wished we’d had a device that could have told us how humid it was. I’m sure it would have shown something like 150%. Still, shouldn’t grumble; the surrounding OMG-panoramas more than sufficiently compensated for the punishing atmospheric conditions.

We arrive at the cliff face. Mercifully, the sun’s on the other side of the mountain. We lap up the coolness, but still get all sweaty climbing these steep steps:

Not for the unfit:

We make it to our destination for the day. Ok, I said the paths are top-notch; this one – notched into the cliff face was the only exception. Not that we noticed: we were too busy being humbled by, and fearful of, tons of mountainside hanging over our heads; too busy taking in the views out over the surrounding valleys too:

There used to be little cabins up here cut into the stone in which folks didn’t just stay in but lived in! All that’s left today though are a few remnants of the dwellings:

These days no one lives here, but folks do sometimes spend the night in tents (what do they knock the pegs into?!) to check out the sunrises – said to be fantastic.

Over there: Teapot! I’ve already mentioned the legend of the two mean sisters who made the world’s weakest tea… Well, it turns out they saved so much brew that it filled a 30-mile stretch of the river – and it smelled nicer than a field full of flowers in bloom:

If you’re super-fit and climb even further up Bazhai you get to another viewing deck – with its own ancient stone chess board!

And that was that. Another wonderful walk up a monumental mountain along perfect paths with very unforgettable views (let’s not mention the heat again).

Back in the car, we were held up for a while by… bamboo: 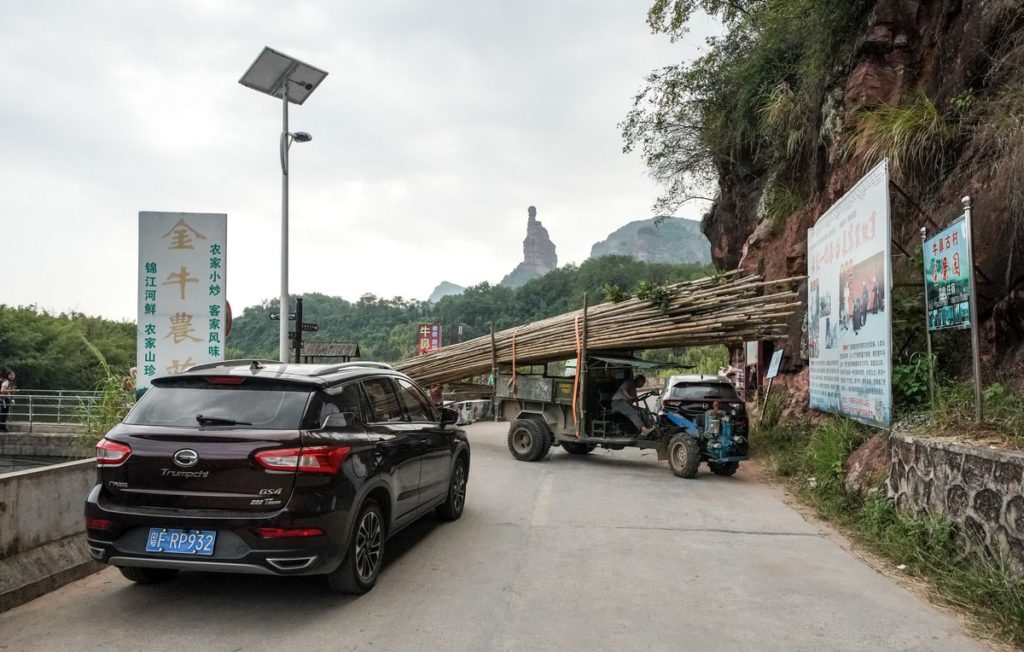 See the yellow strip along the road: rice! That’s how they let it dry!

Oh, and another thing…

If ever you plan on seeing this part of the world yourself, then this, IMHO, is the best route to take:

Day 0: Fly in in the evening; check into your hotel.

Day 1: Early morning (out of the hotel by 04:30!!!) up the funicular to Zhang Lao Feng for the sensational sunrise. Then back down the mountain to check out the Female Stone. Then back up the funicular for the completely different – sunlit – panoramas. Then drive to Male Rock and Male Mountain to see them by daylight too. Then come 15:00 to the natural stone bridge. And finally – the sunset as viewed from Male Mountain.

Day 2: Another early rise while it’s not so hot yet and off to Bazhai mountain. Actually, better would be to forgo yesterday’s sunset on Male Mountain and get to Bazhai instead and spend the night in tents there; then check out the sunset on this day.

Optional: A boat trip down the river:

Bottom line: a marvelous three days can be had at these marvelous – not so widely-known outside China – rock formations. Must-see! Top-100! Highly recommended!

Over and out from Danxia folks. Back tomorrow though – but for something completely different: transparency… 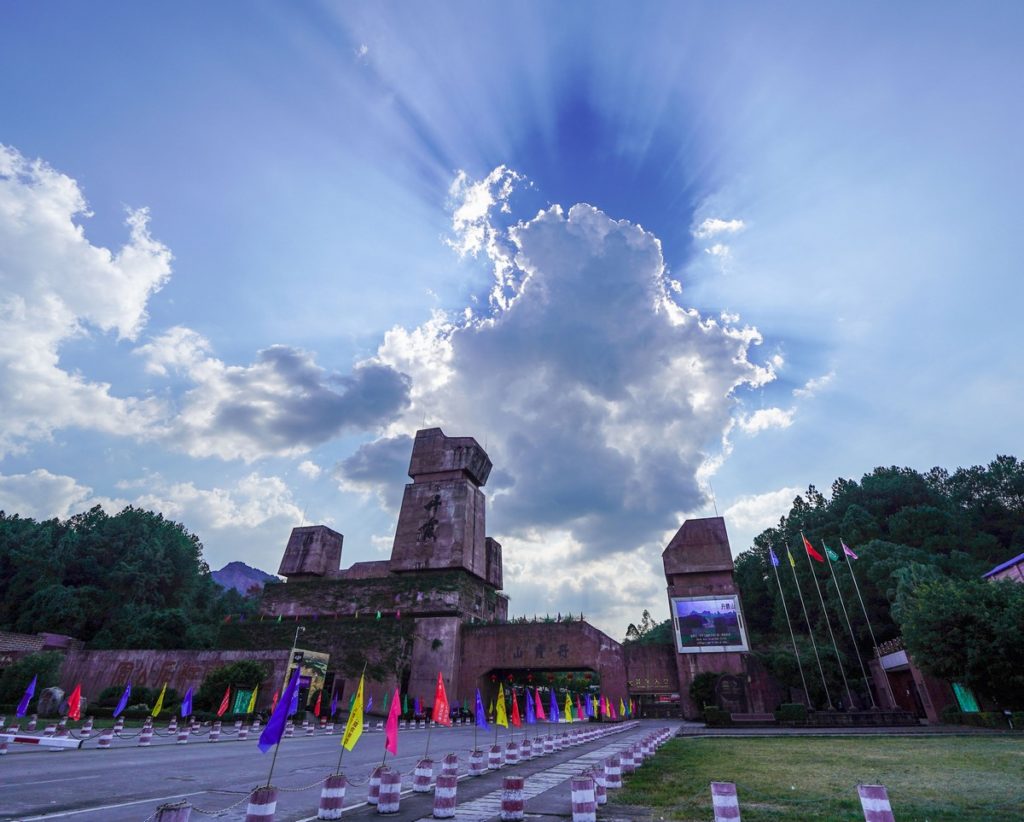