The other day I was in the Argentinian capital for the fourth time in my life – the second time this year! But only this time was I able to get a bit of my favorite pastime in: micro-tourism…

It’s a city of contrasts. There are the historical buildings of yesteryear that hint at the former riches and economic successes of the first half of the 20th century; then right next to them are thoroughly ugly (second half of the 20th century) residential buildings; then a bit further out of the center there are the favelas – slums – with overhead highways running through them; then further still there are new business-class apartment blocks with parks, cycle lanes and other cool infrastructure. But – you know me – I tried to take pics of the positive side of the city…

This here bookshop is called El Ateneo Grand Splendid. It’s housed in an opera house that went bankrupt! Intriguingly unusual! The bookstands are in the stalls, the reading areas in the boxes!! 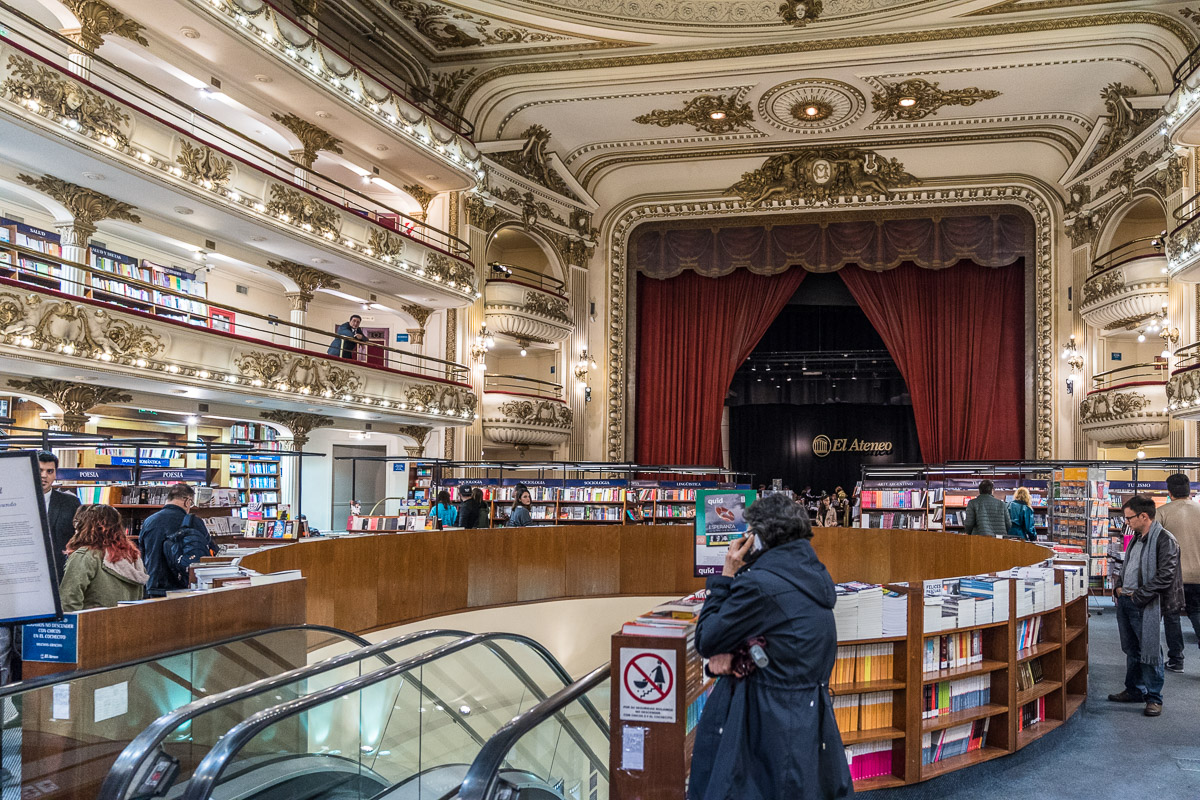 9 de Julio Avenue is also most worthy of close inspection, only… not in the rain. Darn it – just when I was ready for a stroll along it!… 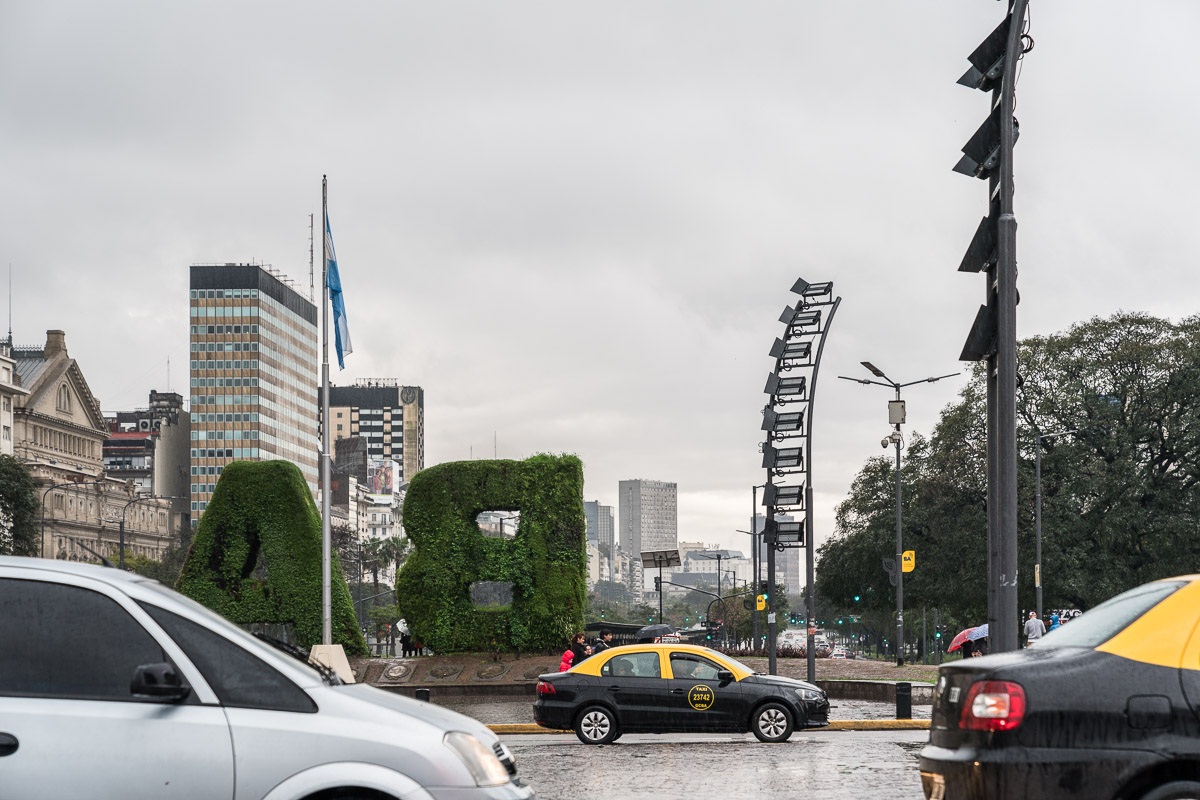 This is the old immigrant neighborhood called La Boca. It was once a place of poverty and squalor that featured favelas of the last century, but then it was transformed – gentrified I think is the term – to become the tourist hotspot it is today – complete with nice restaurants, pedestrianized streets and carnivals.

Woah: the internet tells me La Boca even had a short stint at independence from Argentina (‘becoming Genoese’) – but only for a few hours, I gather :).

This is La Recoleta Cemetery, one of the world’s most beautiful cemeteries. Much marble, very massive, monumentally macabre, and with angels at every turn – reminiscent of a Joy Division album cover (coincidentally featuring a Genoese tomb). Apparently Catholicism and cremation don’t go well together (if I understood our guide right), so space gets tight after a couple of centuries; some coffins even have to ‘wait in line’ in nearby crypts. Hmmm, I thought I was keeping it positive?!…

The cemetery is nearly 300 years old, with some of the tombs aged more than a hundred years; some are well-kempt, others – just the opposite: those Buenos Aires contrasts again…

PS – I got our resident historian, B.G., to give me a synopsis of Argentine political history (btw – Argentina is the birthplace of the tango). Big thanks B.G.! I quote:

Dictators and the tango.

Argentina (the silvery country) as we know it today first came into being with the Spanish colonial conquests, in which a mere 100-120 Spanish troops conquered an immense territory across Southern America. The Spanish declared as theirs a whopping 3.5 million square kilometers, creating the Governorate of the Rio de la Plata, whose capital was christened Ciudad de la Santísima Trinidad y Puerto de Nuestra Señora la Virgen María de los Buenos Aires, or the ‘City of the Most Holy Trinity and Port of Saint Mary of the Good Airs’ (mercifully, the shortened form – Buenos Aires – became common usage in the 17th century:). The conquistadors became the elite – ever valiant, cavalier and lordly. Ever being the right word, for today those qualities have been inherited by today’s ruling class – some of whom number themselves as among the descendants of those to whom in the 16th century belonged half the territories of the world then known to man: “The Mexicans descended from the Aztecs, the Peruvians from the Incas, and the Argentinians from the ships”.

The Governorate’s landowners and cattle dealers owned estates the size of whole countries in Europe, so they were feeling pretty powerful, to say the least. Thus, come the era of the Napoleonic wars, they – like other elites in Latin America – decided they were going to answer neither to the Governor nor the King of Spain.

Leading the uprisings against the king were two generals – Argentina’s Jose de San Martin and Chile’s Bernardo O’Higgins – the first in a long line of generals to lead Latin American countries. Independence was won only after rebellion forces marched thousands of miles, after brilliant military maneuvers, after an incredible crossing of the Andes, and after a whole slew of battles in which they eventually defeated the Europeans. Their larger-sized forces helped in the struggle too; for example, there was the Battle of Chacabuco – the name of which, with others, is carved in gold on the sarcophagus of San Martin in Buenos Aires Cathedral – in which 4500 patriots with nine divisions fought just 1500 loyalists with five. But that’s just one battle; in fact most all battles for independence of Spanish colonies – Boyaca, Maipu, Pichincha… – were very similar in terms of overall sizes of armies. For example, the Battle of Ayacucho (led by Simon Bolivar‘s lieutenant Sucre) was one that saw around 12,000 soldiers take part.

Argentina’s gaining its freedom was followed by the swift installation of a military dictatorship and subsequent epoch of never-ending wars with neighboring countries. The ruling generals fought against Brazil, Uruguay, Paraguay and the Pampas Indians… not with bayonets but with money – in an alliance with Peru and Bolivia against Chile. The constant warring strengthened the position of the military in the country, and mass immigration from Italy and the forming of a large German colony led to close economic and political ties with the Pact-of-Steel European powers in the mid-20th century. Around the same time Argentina came to have several fascist parties (as if just one wouldn’t have been plenty!). And in a similar vein, at the start of WWII, 17 out of 34 Argentinian generals had had either study or service experience in fascist Germany, and the army was trained and even uniformed in the classic Prussian manner.

In 1943, having stayed neutral in the War, the era of Juan Domingo Peron and his wives was ushered in. His second wife, Eva – aka Evita – grew up in poverty, was an illegitimate child (in a Catholic country!), and an actress to boot; she was also a national hero, particularly for the working-class descamisados – the shirtless ones. She met with heads of state and the Pope, founded a charity foundation, and fought for women’s rights. Among other grand titles, at 33 she was officially named Spiritual Leader of the Nation by the Argentine Congress – but she preferred to be referred to as the ‘bridge of love between Peron and the People’.

At just 33 Evita tragically died of cancer. Several years later the irrepressible general married once more – again to a young woman from a simple background – Isabel Martinez – a disco dancer. In 1973 the general again became president, making his wife vice-president. The following year he died, and left her to take the reins and rule the country. Becoming president herself – and remaining so for two years – she was the first ever female head of state the world had seen.

In 1976 she was overthrown by General Jorge Rafael Videla, the head a military junta. This started a long succession of similar juntas led by generals – and once by a vice-admiral. After the seaman it was Galtieri‘s turn. He fancied the country’s chances in a ‘short victorious war’ – in taking the Falkland Islands from the British. But he seemed to have underestimated a certain Iron Lady called Margaret Thatcher. The rest, as they say, is history: after the British re-took the islands he was soon removed from power.

The disgraced Galtieri was replaced by one more general – the last in the long line of Argentine dictators – Reynaldo Bignone. He lasted just a year. Since 1983 the country’s generals have been confined exclusively to their original professional roles – as military men, not dictators.

Fast forward to this century, and we see another ‘Iron Lady’ in power – the first elected female leader of the country, Cristina Fernandez de Kirchner.
—8<—

PS: a kunst installation in our hotel: