So, just how exactly did we get to the upper reaches of the Yenisei?

Well, obviously, we didn’t walk. It involved various means of transport. First, we drove 400 km from Abakan to Kyzyl. The quality of the road was bearable – it is asphalt all the way, though there were lots of roadworks. Next year it should be in better shape. It took us 6-7 hours because of the repairs, detours and time spent waiting at traffic lights giving way to oncoming traffic on the single-lane sections.

But we finally made it to the city of Kyzyl, the capital of Tuva:

However, this is where things took an unexpected turn for the worse. 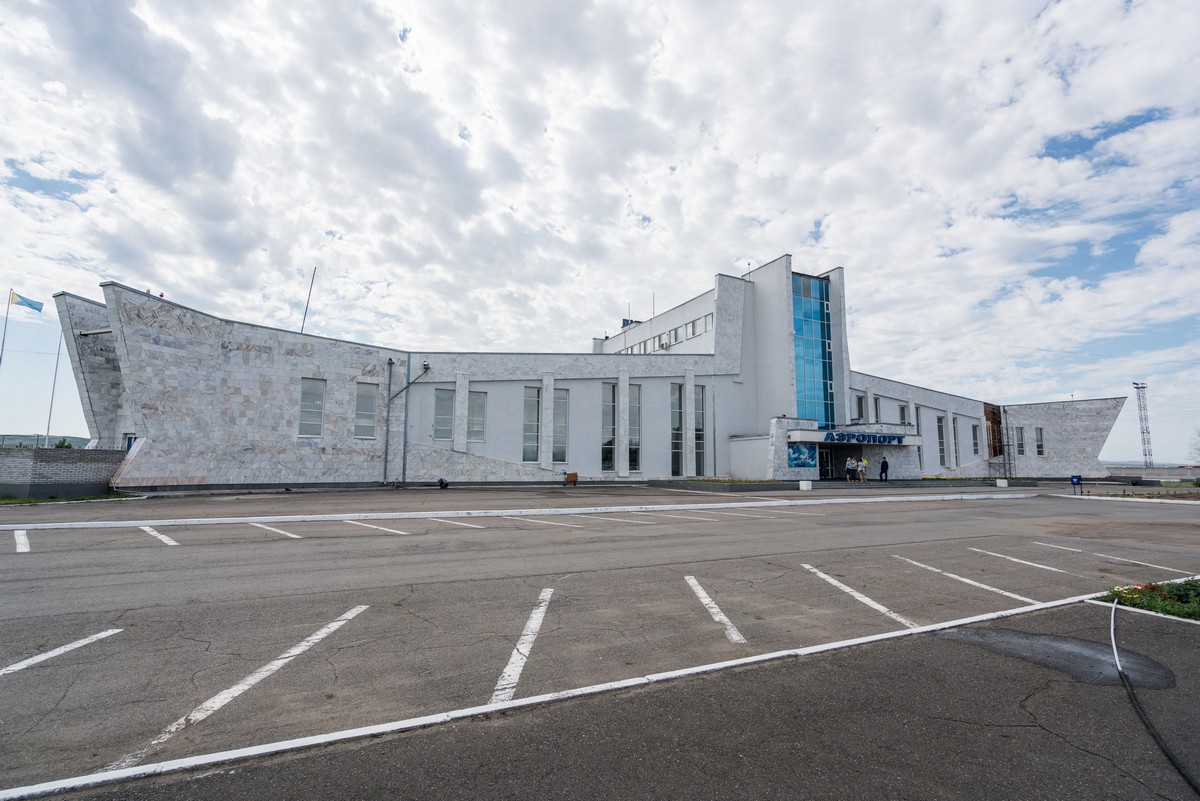 The chartered helicopter refused to work. Or, to be more precise, the operator stonewalled our planned flight in every way possible. It’s been quite a while since I last encountered such a… let me think of a fitting term here… such a dismissive attitude towards customers, even in the least developed parts of the globe. I used to think the old Soviet ways had long become a thing of the past. Now I know I was wrong. Here in Kyzyl, I had some striking flashbacks to the times of the USSR.

For example, at one point the operator’s representative spent an hour and a half looking blankly at the contract (which they received three months ago) with some single-finger typing – only to declare solemnly: “There’s a storm front approaching. The airport is closed!” Then we started calling them repeatedly, and the reply was: “I’m sick of talking to you” and then they hung up on us. Fantastic! 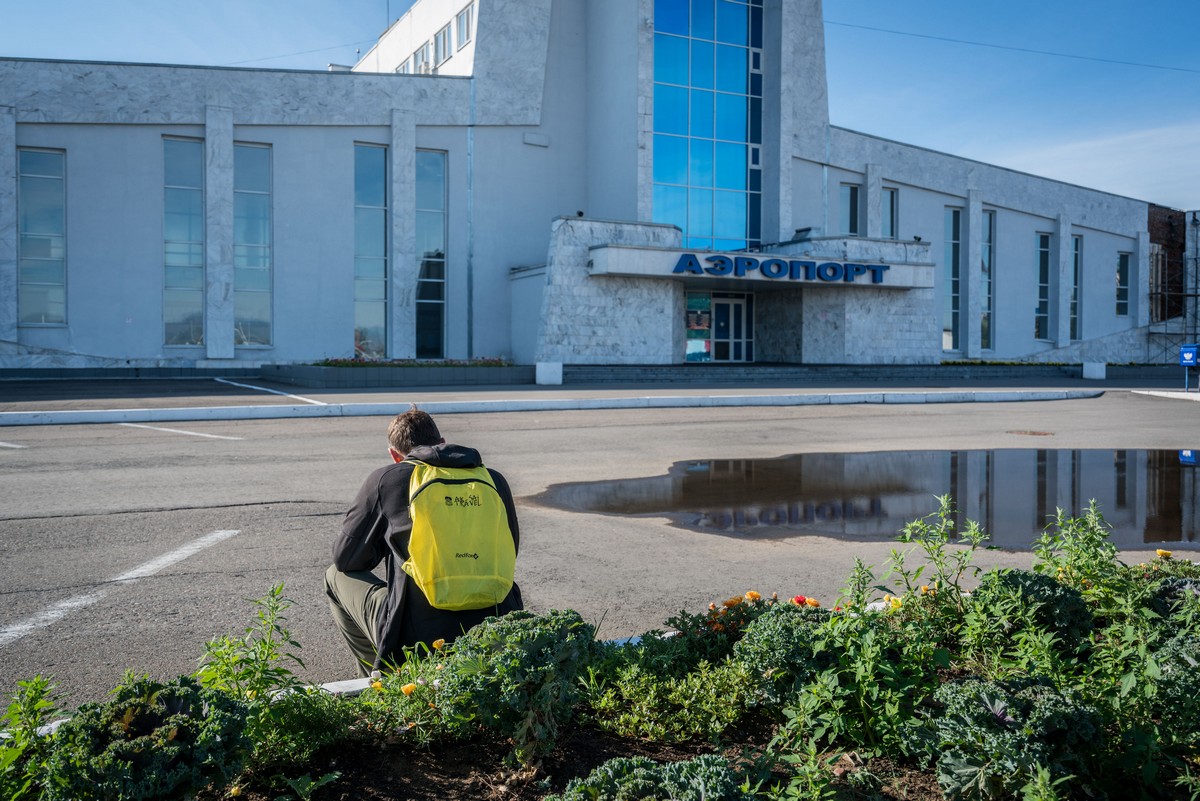 By the way, there is a marvelous artefact next to the airport here. It has blue streaks all over its surface – maybe the effects of too much alcohol…

Apparently it’s meant to embody some idea or message – I’m just not sure what. Our team nicknamed her simply the Witch.

Now, let’s get back to the positives.

We returned to the city, and waited there for another day and a half for the airport situation to be resolved. The city itself was fairly unremarkable. There are lots of decrepit buildings, and there are many newly refurbished places as well. The embankment in the city center is splendid, especially the ‘Center of Asia’ obelisk. If you happen to be in Kyzyl, I recommend seeing it.

There’s an Irish pub! And, of course, we make a beeline for it – it’s lunchtime and we don’t have anything else to do… And then we find out it only opens at 18:00, despite the Internet and the ‘opening hours’ sign on the door stating a much earlier time. Not much can surprise us now…

After 18:00, the place turned out to be a very decent establishment – a truly Irish pub, though also serving salo and samogon. And they had only recently opened.

We had plenty of time to kill, and wandered around all sorts of places and establishments. Here are a couple of things that stuck in the memory: 1) the National Museum was surprisingly lavish, especially its collection of Scythian gold; and 2) the slow service in the local restaurants: it takes at least 2 hours to serve a no-frills meal to a group of 15.

So, basically: the embankment and the museum are a must; the rest is optional. If you’re planning a helicopter tour, then be prepared for both, possibly several times.

Meanwhile, the time of our departure arrived. We, like the honest travelers we are, turn up at the airport at 08:00 as instructed and form a queue.

We had to wait for a bit, then each of us had to sign an appendix to the contract four times (what on earth for?). Each of us then received a ticket stating the passenger’s name, and then we had to board this antique Soviet-era bus… All of us started taking pictures of this rarity only to be confronted by a puzzled: “What, have you never seen a bus before?” To which the retort was: “That sort of bus? No, not for about 30 years.” 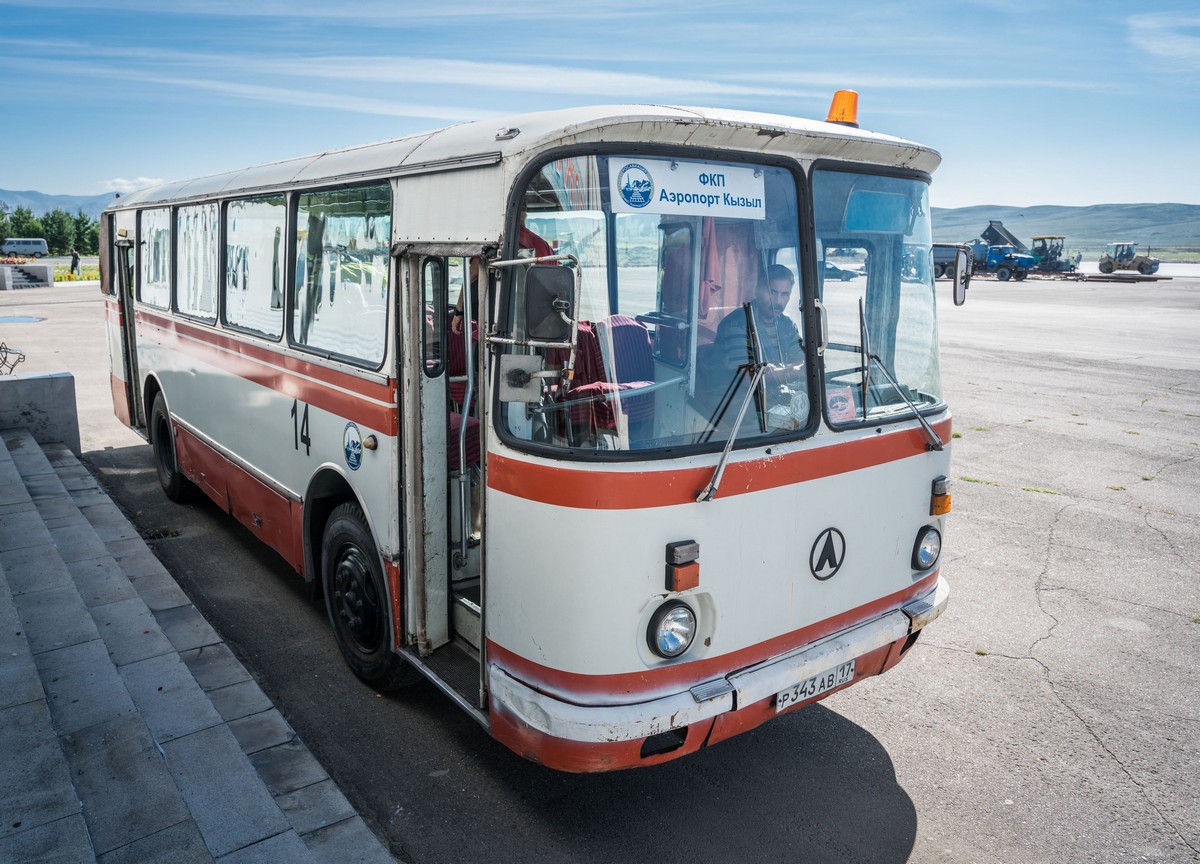 In short, our departure from the local airport involved a whole ceremony with Shaman dances and everything. (Actually, all joking aside, we did actually visit a local shaman on the second day of our wait in Kyzyl.)

After the surprises, numerous autographs, and ticket checks, we were finally on board and off we flew!