A bit like how English and Russian sources give differing data on carbon dioxide in the Earth’s atmosphere, so too do English and Russian sources regarding who first thought of boring into the ground to extract oil. For example, the Russian Wikipedia page for ‘oil well’ states that the first oil well ever was drilled in the Russian Empire – in Bibiheibet, in what is now Azerbaijan, in 1846. Whereas sources in English on the net state it was Drake Well in Pennsylvania that was first – in 1859. But if you dig deeper, it turns out oil was drilled in the USA a little earlier – in 1857; and three years before that – in Poland. While in ancient China (several centuries BC) they used bamboo to extract oil. However, concerning the modern industrial method of oil extraction, it was in fact Russian engineers here in Bibiheibet who were ahead of the others.

And here’s that very oil well:

I don’t think every wooden or metal part that makes up the whole of the installation today is an original from back in the day – not all would have been preserved so well, surely – but apparently some of them are the original items. Others clearly were replaced several decades after the well was first commissioned in 1846, like this piece: 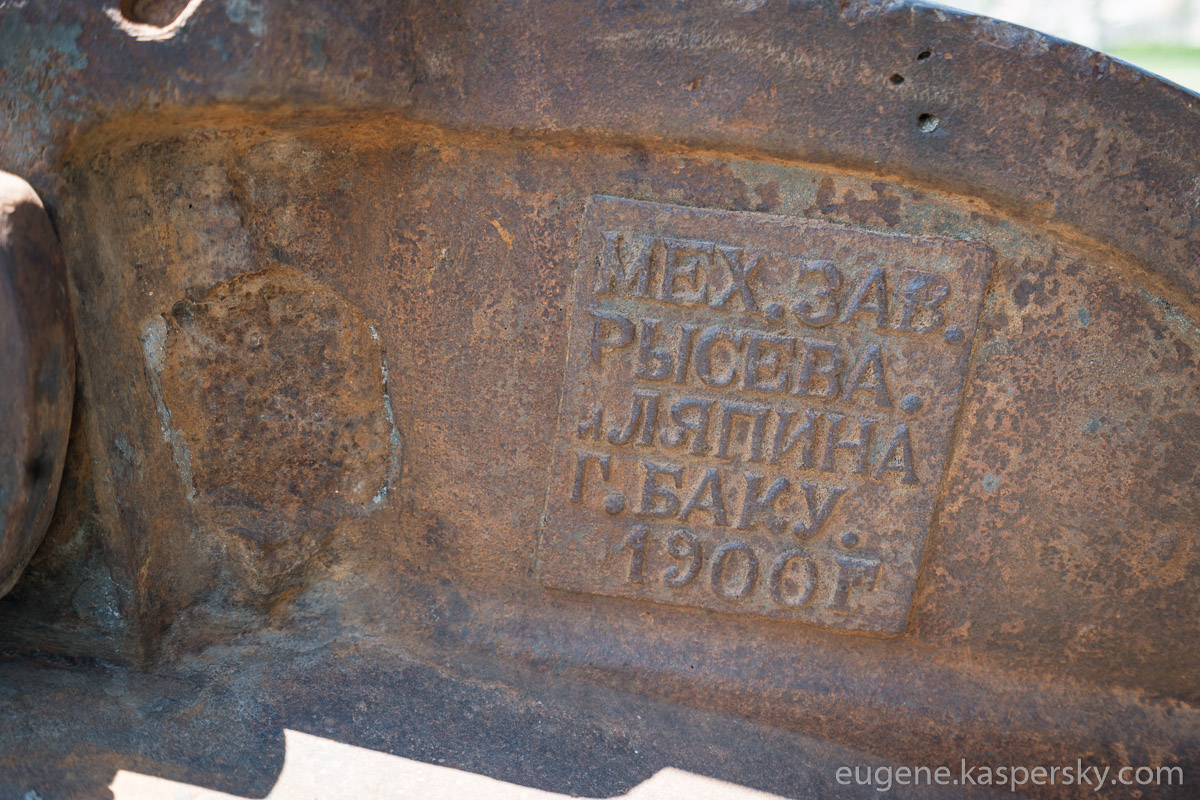 One of the original parts:

Yes! Nobel – as in Prize! They sure got around, eh? 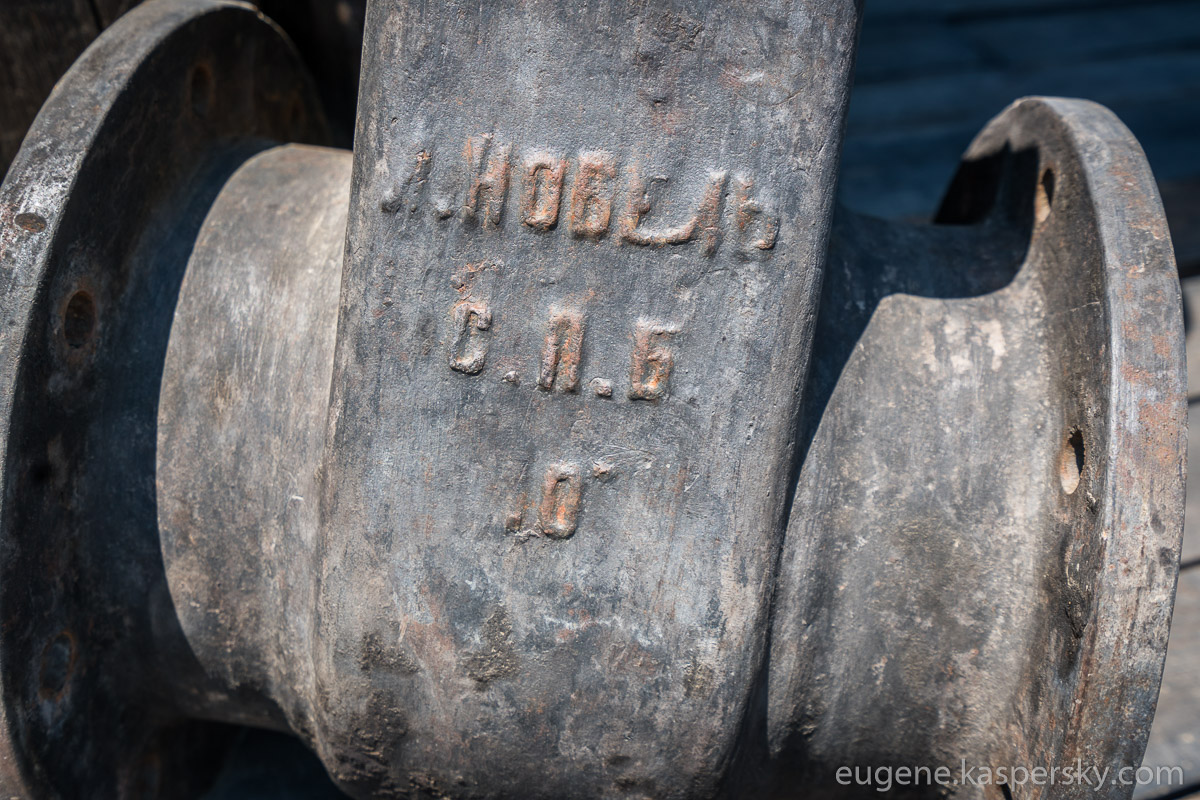 I wasn’t expecting being able to see the still-operating oil wells three kilometers from old Baku. Here they are on Google Maps.

Azerbaijan does well in the ‘first ever’ standings when it comes to oil extraction. Some 40-50 kilometers out to sea from the shore is the first ever oil rig! More like a whole town on stilts. It’s Neft Daşları. Alas, we weren’t able to go have a look at it, but did manage to check out the factory where they make such oil platforms: 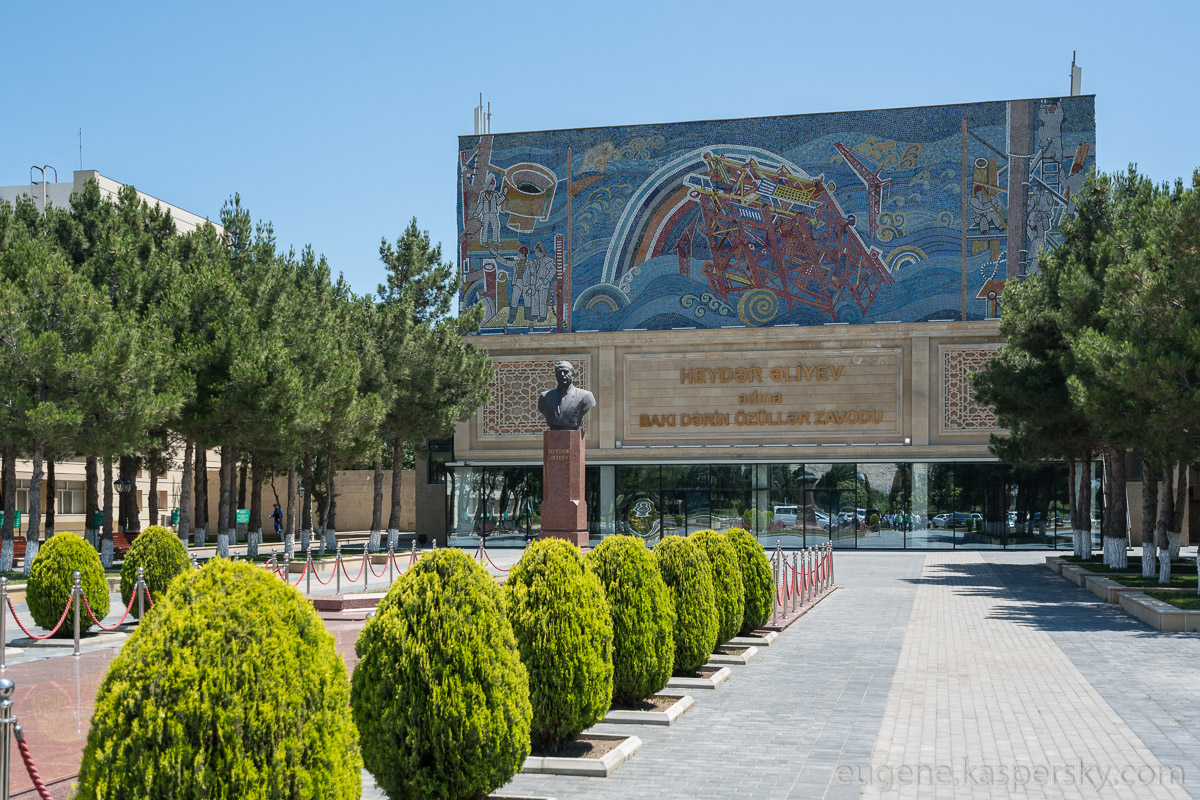 An oil rig starts out in life as a lot of steel sheets and slabs:

These sheets and slabs get transported to whichever workshop needs them for turning them into pipes:

Different short sections of pipe are then welded together:

Longer and longer they get:

Longer and longer, bigger and bigger – too big for the production facility even. So they’re taken outside. The painted parts will be above sea level. The non-painted parts (treated with special anti-corrosion plating) will be underwater – up to 200 meters below sea level.

Once the frames are in place they get covered in all sorts of kit to be able to drill into the seabed and pump out the black gold. But more on that a little later…

Btw, this is a mobile (exploratory) concrete platform, which can be towed around.

PS: I forgot to mention how, depending on the size of a particular platform, manufacturing can take from a year to 18 months. How long it then takes to add all the kit, and attach the rig to the underwater pipeline – I don’t know just yet…