This is a veeerrrry strange place. It’s a place that’s completely isolated from the outer world – isolated by man, that is (not naturally isolated like, for example, Kamchatka). In fact, more isolated (by man) than the Chernobyl or Fukushima nuclear power plants. To get into it and get over to those there hills on the horizon is completely impossible, even theoretically – neither by ground nor air. You’d be shot!

An absurd paradox of paradoxes, if ever there was one: they call this place ‘demilitarized’. Turns out to be one of the most heavily militarized strips of land on the planet! Yes folks, this is the Korean Demilitarized Zone – the DMZ. 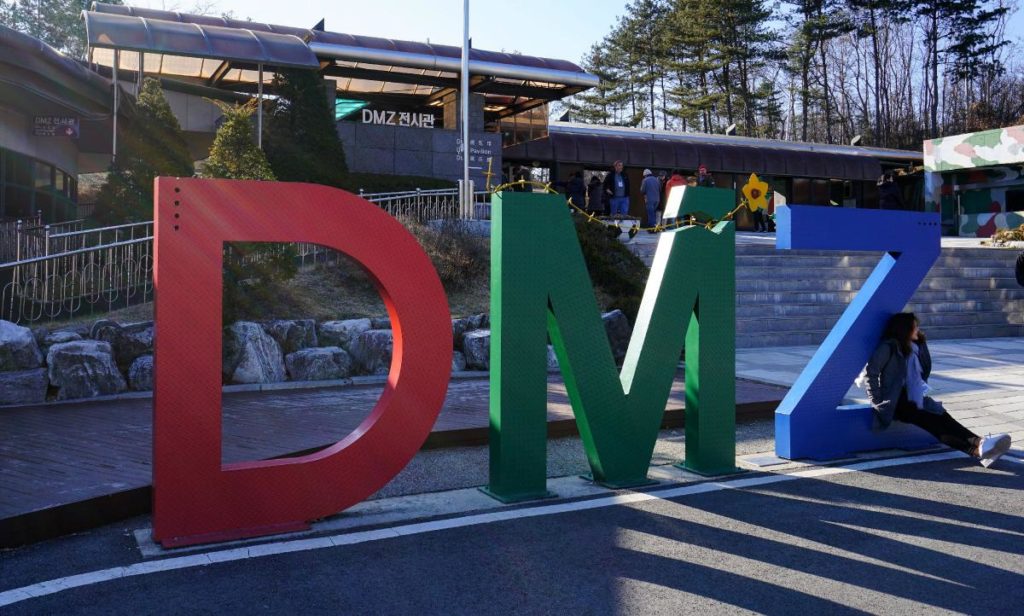 Here’s a brief modern history of the place…

For the first half of the 20th century, Korea (the whole of it) was a Japanese colony. Then, in 1945, Korea was liberated by the joint efforts of the Soviets and Americans, the former occupying and administering the half north of the 38th parallel, the latter – the half south of it. Against a backdrop of Cold War politics, this situation eventually – in 1948 – led to the establishment of two separate government states – North Korea and South Korea.

The new governments of both North and South Korea were military dictatorships, and in 1948 – when both the Soviet and US armies left – it was two military dictatorships that were left one on one. Now, I’m no expert historian, but something tells me that such a combination was extremely unstable and bound to lead to war. (Hmmm: by looking at what happened next, maybe I do have an expert historian within me.)

Sure enough, two years later: war. A particularly barbarous one at that.

Today, that war is called the Korean War, which broke out in June 1950 and ended in July 1953. Supported by the Chinese and also the Soviet Union (mainly in terms of weapons), the North Korean Army got as far as the furthest southernmost point of the peninsula and had practically won, but then the USA got involved…

The Americans stopped the offensive from the north and the South Korean Army pushed back – as far as the northernmost border of North Korea! Things were looking good for the South, but then the Chinese got involved…

This led to the bloody front line between the two warring Koreas moving up and down the full length of the peninsula twice both ways. During all that up-and-down practically everything was destroyed and some three, maybe four, maybe five million died. The population of Korea before the war stood at a little under 30 million, meaning some 10 to 15% of the population were killed. Besides, a million-or-so Chinese ‘volunteer’ soldiers also died. In all, a savage murderous mess.

It all ended with a line being drawn between North and South cutting the peninsula practically in half. That line is the DMZ – 250km long, four wide. A place where man goes never; and – as a result – curiously a place of rich abundance for flora and fauna.

North Korea – the Democratic People’s Republic of Korea – is a de facto one-party communist totalitarian state system (there are actually three political parties, but just one dominates in everything completely) with a thoroughly undeveloped economy, but with atomic weapons. There’s no Internet available for the domestic population, though foreign tourists are permitted use of it.

South Korea – the Republic of Korea – well, it’s all just the opposite of North Korea really. Not that it was always so. Both South and North were similar way back: both poor military dictatorships. But in the South in the early 1960s Park Chung-hee began seeing in the economic and political reforms that laid the groundwork for the country’s leap to a brighter future. All the while North Korea stayed with its original closed, centralized, communistic, totalitarian format.

A unique situation. A historical experiment, if you’ll excuse the cynicism. One country, one culture, one people – as a result of a bloody confrontation all of it divided in two, with each half going their own – opposite – way. I can’t think of any other such cases. England against the United States? Nope: the political systems were the same. Spanish colonialism? Nope: war wasn’t a permanent feature, and one by one the colonies freed themselves from Spain. West and East Germany? Nope: they didn’t fight each other. North and South Korea? Yep: the only one. Two Koreas. Two Flags. Two separate histories and destinies… 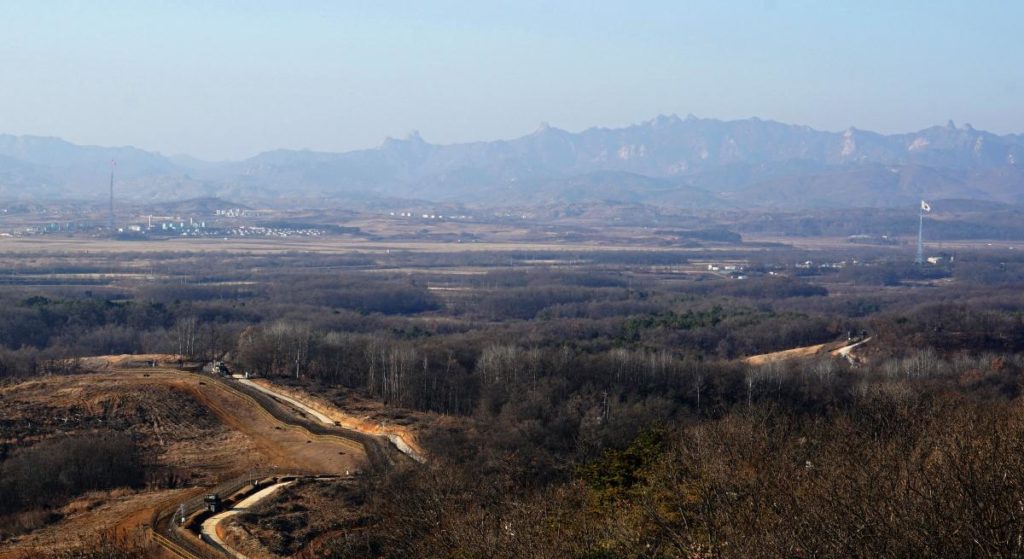 And in-between those two Koreas – there’s an anti-tank wall that’s barely perceptible to the eye. There are also loudspeakers through which the North pipes propaganda at the South, and the South pipes… what sounds like South Korean pop hits from the seventies! 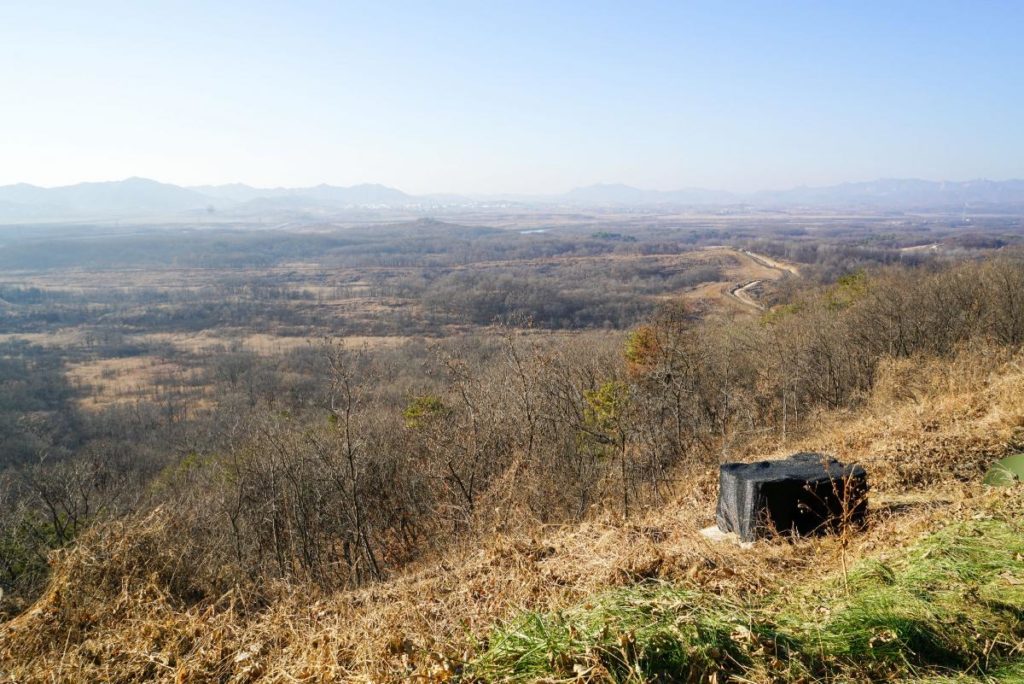 And despite the imminent danger of the place, it’s also a tourist destination, with bus trips here and there along it! And it’s getting more and more popular…

You can also check out some of the tunnels that were dug by Northerners trying to get to the South (actually, its capital city). Alas – no photography allowed, but you can see some pics on the Internet. 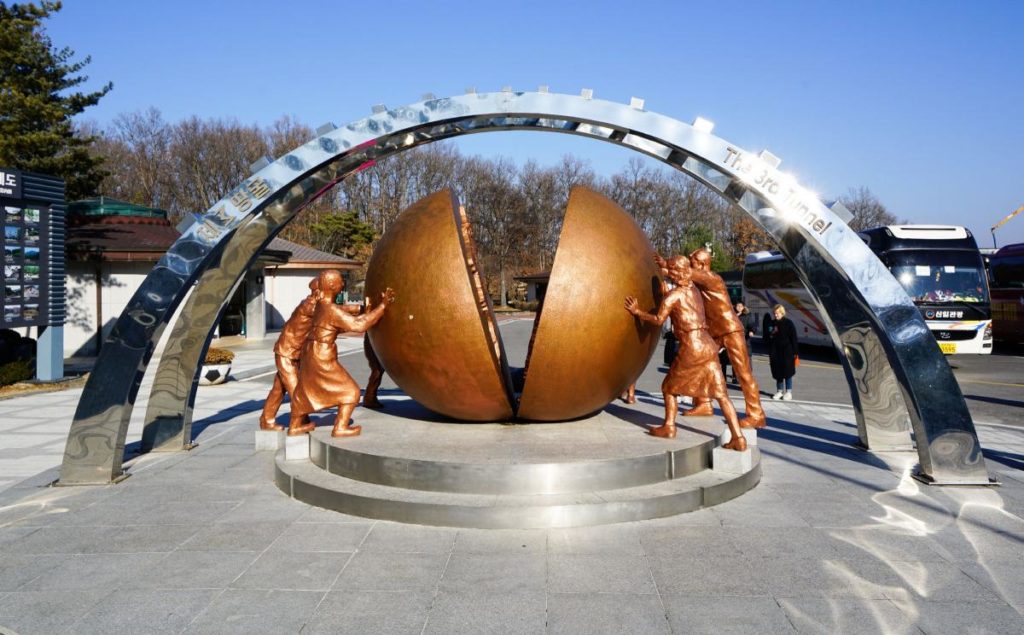 The tunnel was bored into granite – two meters wide and two meters high. You need to bend down a bit to walk through it, as the mandatory helmet adds quite a few centimeters to your height. It’s a little humid down there and water runs down the walls. Hardly a pleasant stroll, but it’s not meant to be. Incidentally, 3000 soldiers could run through the tunnel in an hour.

About those pics on the Internet: the round and neatly finished tunnels are the South Korean seized ones, which are open to tourists. The uneven stone-walled ones – those are the original, non-refurbed ones.

They say that the first tunnel was discovered because of smoke rising therefrom: the North Koreans were cooking up their lunch! Others were detected by defectors escaping through them. In all four have been found, but there are thought to be some 20 in total. Underground scanning at such depths apparently isn’t feasible, and the tunnels are detected by ‘microquakes’. The Northerners blast through the rock with dynamite, and detecting this is easy: vertical deep holes are dug into ground and filled with water, which is then monitored. A blast from dynamite unsurprisingly causes the water in the holes nearby to shoot up – and this is what gives the game away.

PS: Here’s Dorasan Station – the last one before the border. New building, fresh platforms, but rusty rails – which haven’t seen a train in a long time. In fact, to just one of the platforms one train per day arrives – from Seoul.

I wonder when regular trains may run once again on these rails – without the border and with no need for a passport?…