I left you last week with the safety instructions for when visiting the Lytkarino optical glass plant. Now we’re all clear on how to stay safe, on we go with our excursion, this installment being of the actual production facilities…

First up, a quick march around the ‘old’ section of the manufacturing base. I see what they mean: furnaces à la 19th century, with thick brick/concrete blocks around the furnaces. REAL old school :). White hotness inside peeking through the cracks around the brick front ‘doors’; I wanted to get a closer look, of course, but much too hot to even approach. 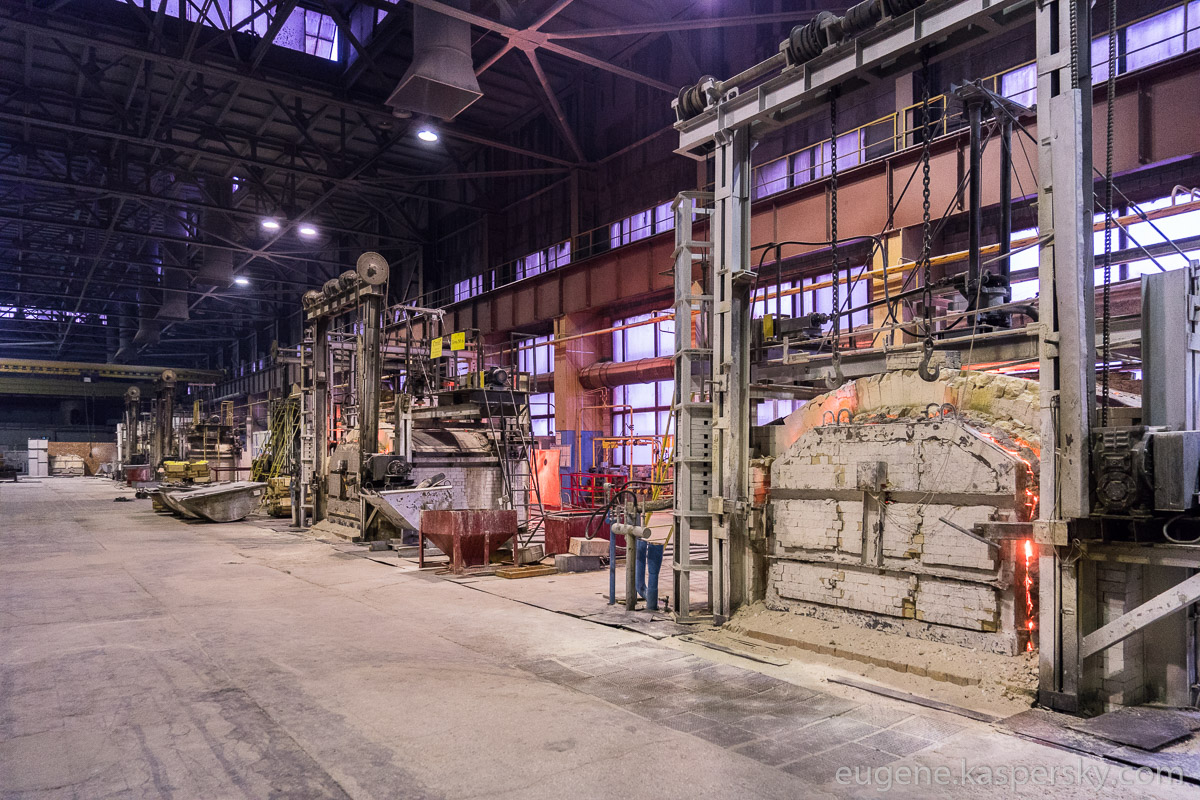 Now, I was expecting things to be silly-hot where the action is here, but what I didn’t expect was there being absolutely no acridly pungent smells. The place was as sweet smelling as a flower shop – almost.

Here are the oversize pincers that extract the fresh, hi-end optical glass from the furnaces:

They call this large clay tub a… can you guess? 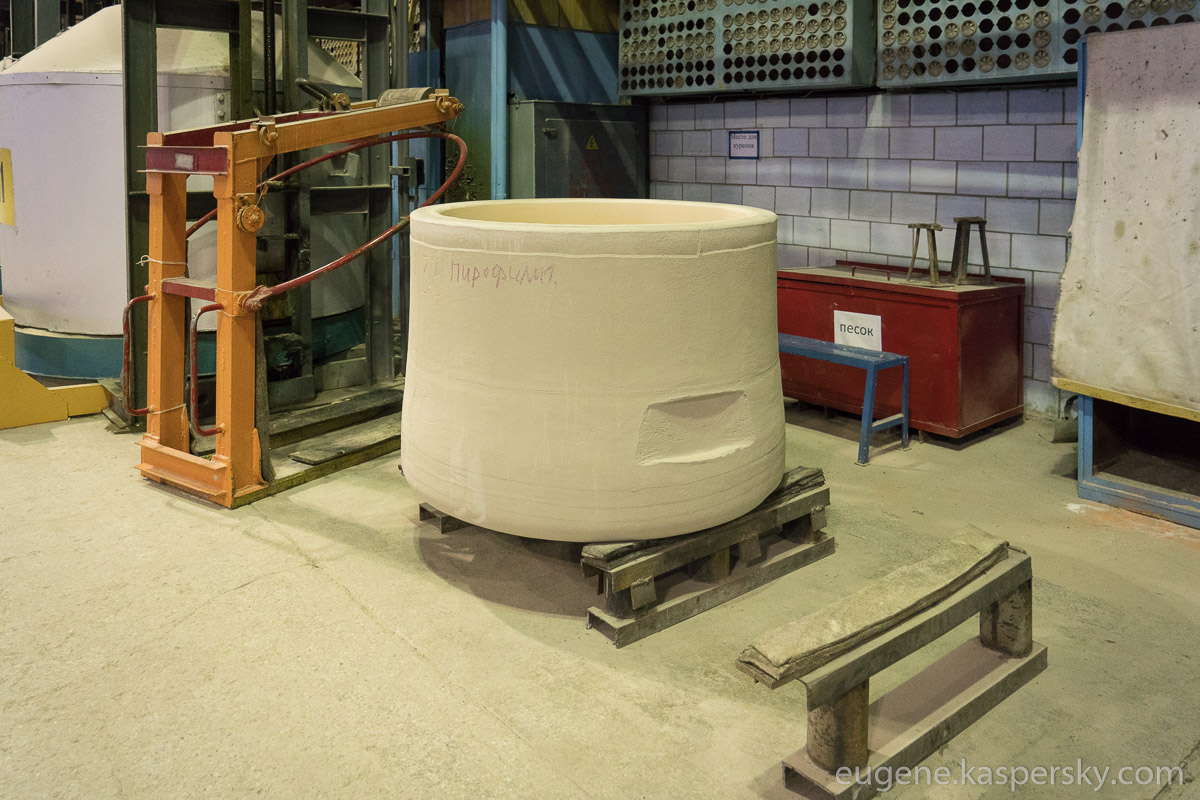 It’s in the potty that they mix sand, quartz, and other ingredients together, and melt it all at thousands of degrees – not Fahrenheit, not centigrade… maybe even Kelvin (what’s the difference? Still hellish hot). The molten substance is fused, then shaken and stirred, then something is added to the admix, which is then left to sizzle for a bit still at crazy-high temperatures. I mean really crazy-high; literaally higher than fresh lava erupting out of Tolbachik volcano!

After stewing in its own juices like that for a time, the smelted glass becomes ready for the next stage – its fashioning into glass as we know it – here:

The team that does the glass-making is ready. The horizontal-crane carries the potty over to them, full of the super-duper, super-pure molten glass: 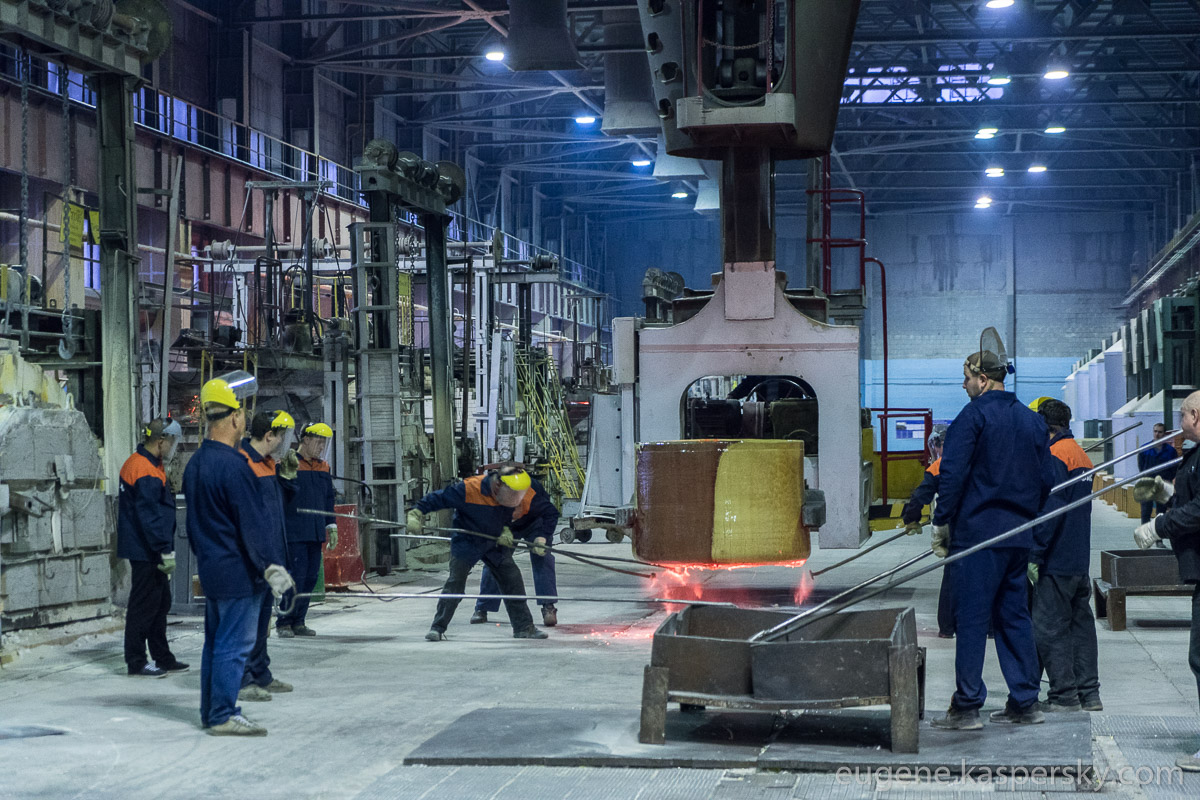 First the team take off the froth/skin, just as if it were soup/boiled milk: 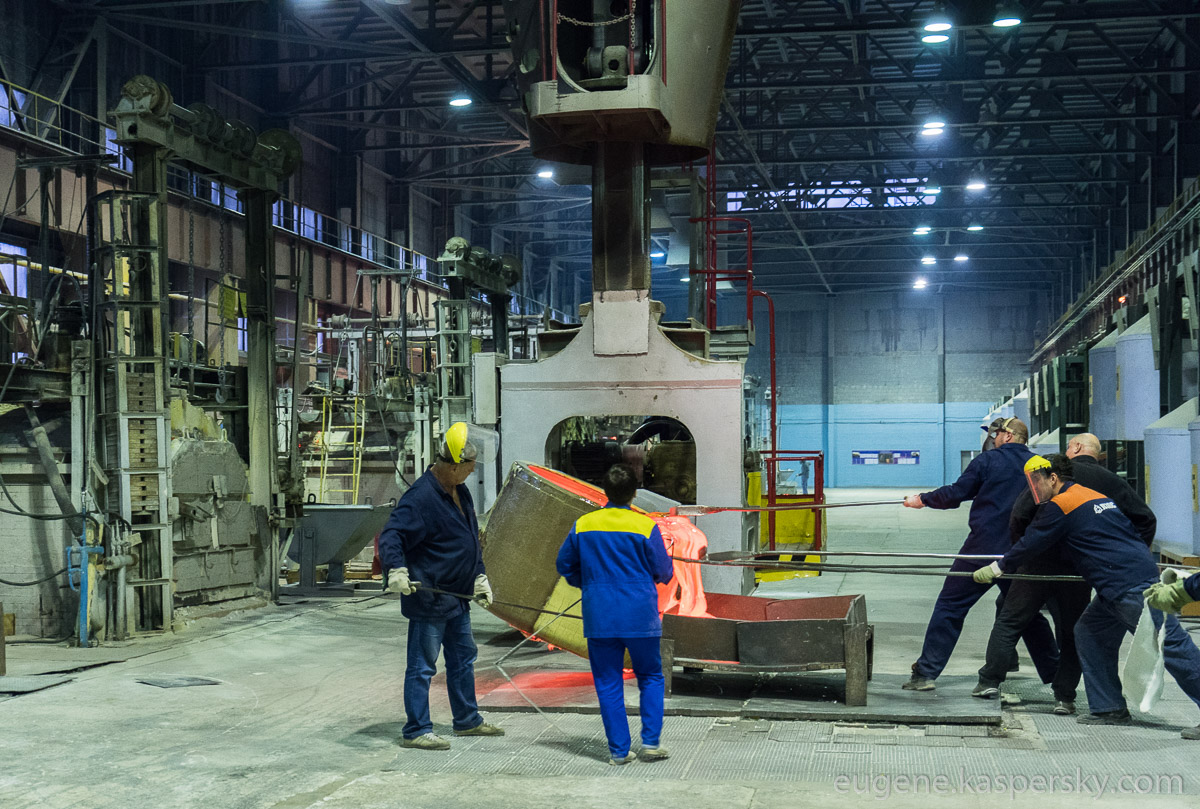 The froth/skin is poured into a container which the team then leaves the heck alone: after all it’s a 1000-degree bit of froth/skin that’s cooling fast into very sharp substance…

Next up – they pour the molten glass into a cast:

Yep, just like in the kitchen. And there was me thinking hi-tech glass manufacturing was different. Turns out it is…

…But not completely: just like cupcakes, they use special ‘cups’ for forming the product.

After pouring the molten glass into the cast its quality needs testing – by one of the quality control specialists:

Today her verdict was positive. Phew. The long glass-making process can continue…

But… wouldn’t computers, sensors, automation… all that – be more appropriate for checking the quality of the world’s best special optical glass? That was indeed the question I put to our suited guide. He said such comp-tech is being introduced all the time, but… more about that in a bit…

Back to the glassmaking: next, the chief glass-maker gave the command to cut the molten glass in half. Then they put both halves to one side to cool…

Here’s the froth, btw, which was put out of the way to cool: 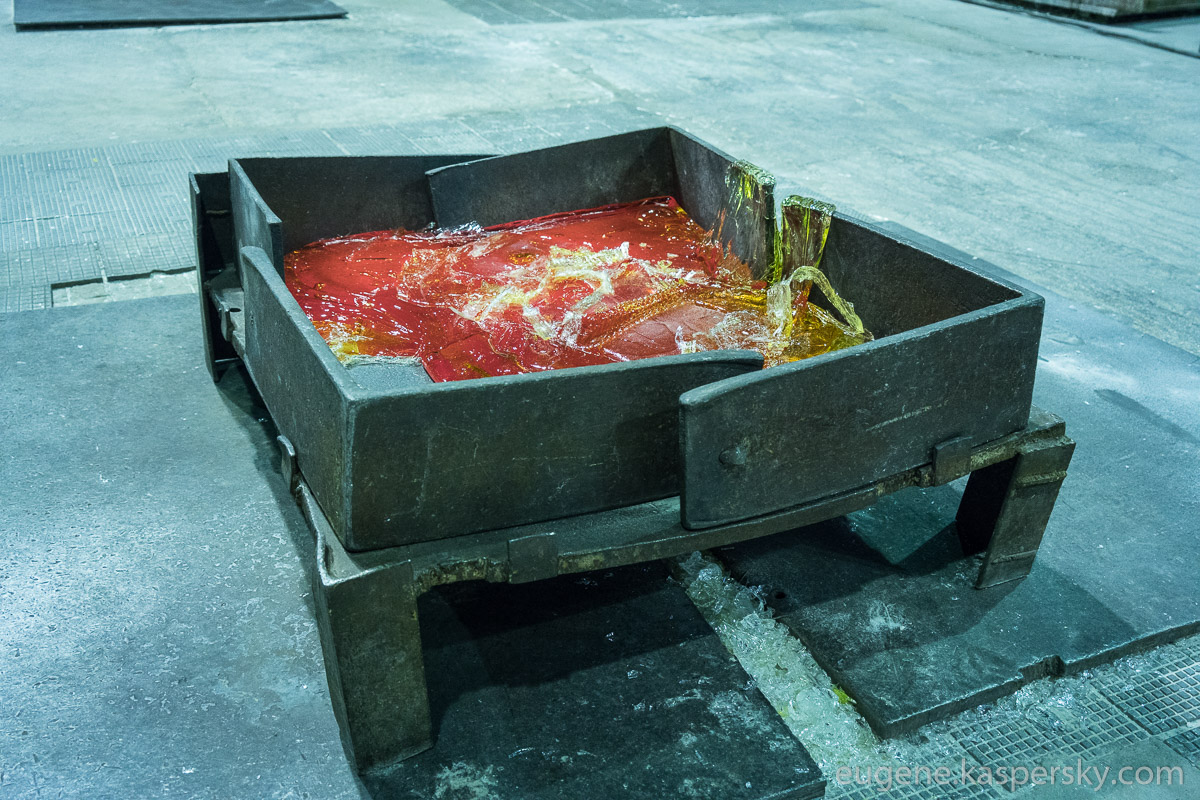 The following pics show the furnaces – still working, but with the potty already removed – during technical servicing, which is actually just some kind of flameproof sand being thrown inside. But the temperature is so high that even flameproof sand also gets liquefied and needs removing occasionally – much like the froth from the ‘soup’. The surrounding various bits of heavy-industrial kit also need removing and ‘servicing’ occasionally. No wonder: literally nothing can take the heat for long.

Back to the lack of computerization… Turns out there are certain processes which computers would be pretty useless at; for example, assessing the purity/quality of the molten glass when it’s bright orange as shown in the pics. Of course, some optic production facilities will use some automation/robotics, but this plant makes unique, bespoke, specialist glass, the production of which can’t be robotized. And that’s that.

But we continue our tour of the production facilities, pics of which get more and more interesting the further we go along…

Here’s the warehouse for finished product. Not quite finished – semi-finished. Blocks, sheets, pieces of various degrees of transparency and color. A glass boutique: 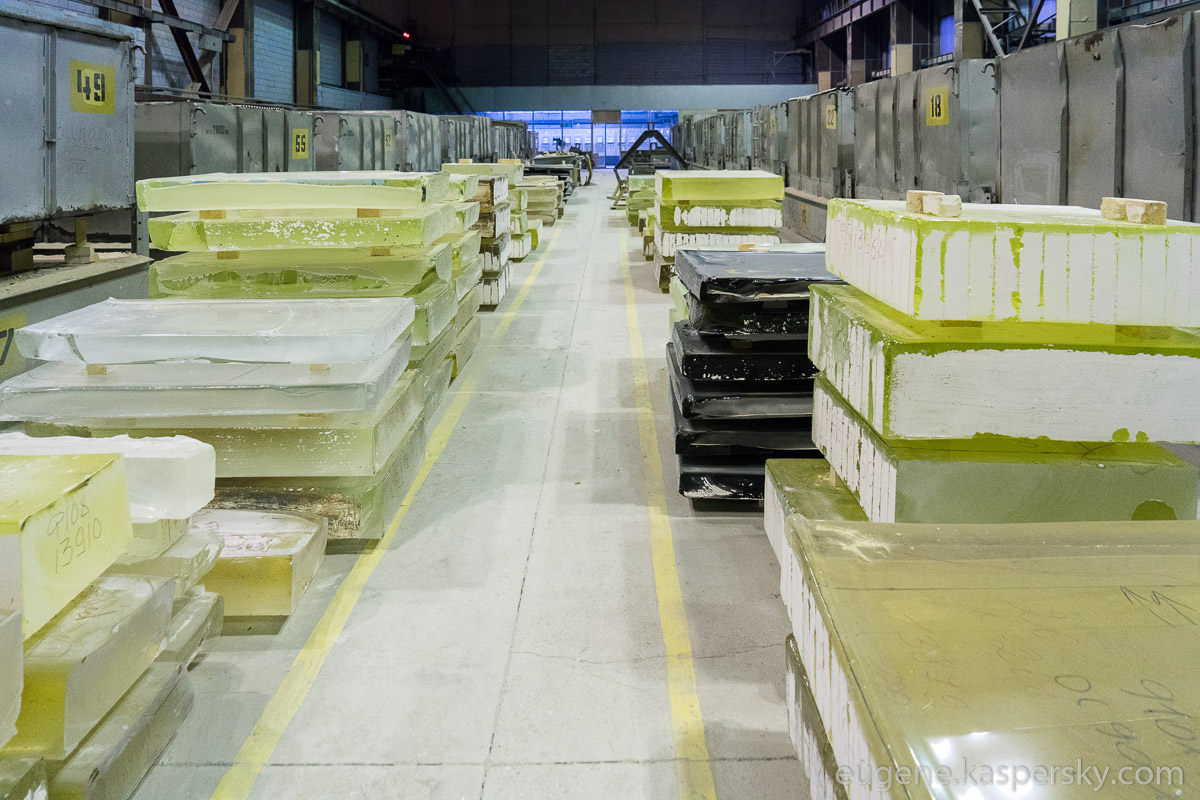 Some of the semi-finished product gets further processed to make finished glass products, while some of it gets used for glass research, in scientific programs and other experiments with technical universities.

The old furnaces have been in operation for many generations, and tend to be of the type that are standardized throughout the whole world. But some production kit is as specialized as the special glass it makes, and there’s quite a bit of that here, including platinum potties and stirrers! Btw, specialized glass is made by the Japanese, Germans, Americans as well as Russians Lytkarinis!

Alas, it’s not exactly very touristy here. It’s a production facility that makes special glass: hardly Bermuda. What’s more there’s not much noise and no foul smell. One thing it is – spotless. Still, cleanliness won’t attract the tourists – besides those with a mathematics background and a child’s curiosity for anything unique :).

Onwards we march – to the glass processing section.

Again: old school. Literally very Soviet, harking back to the 60s and 70s. Hat off to Soviet engineering that it’s still able to put out world-beating special glass today. Incidentally, here lies the six-meter mirror of the BTA-6 for servicing.

This mirror was the world’s biggest between 1975 and 1993. The 40-ton looking-glass was made here; it was so massive a new building had to be constructed to house the manufacturing process. 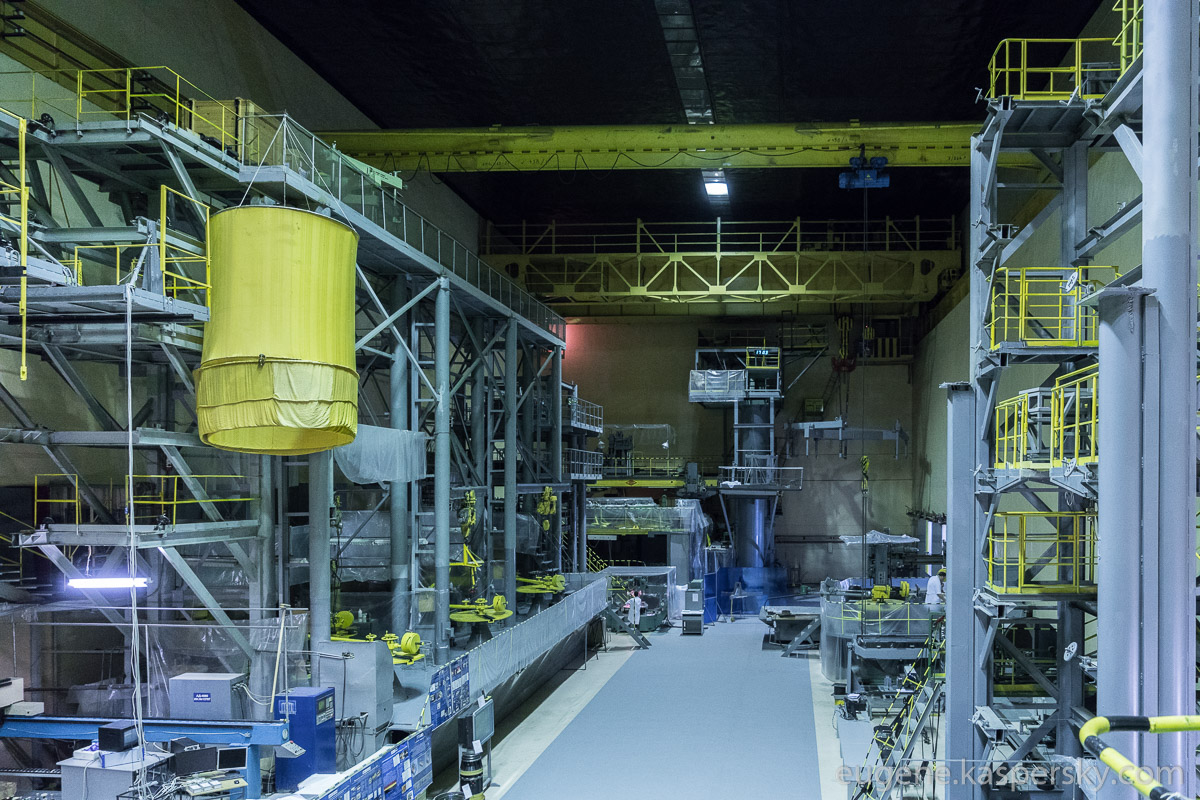 Wow – look how thick it is! When it was cast the only way for it not to crack of deform was by cooling it reeeaaally slowly. No reeeeeeaaaaaaaally slowly: FOR TWO YEARS! Less than one degree per day! Then it was polished FOR 18 MONTHS! On this lathe: 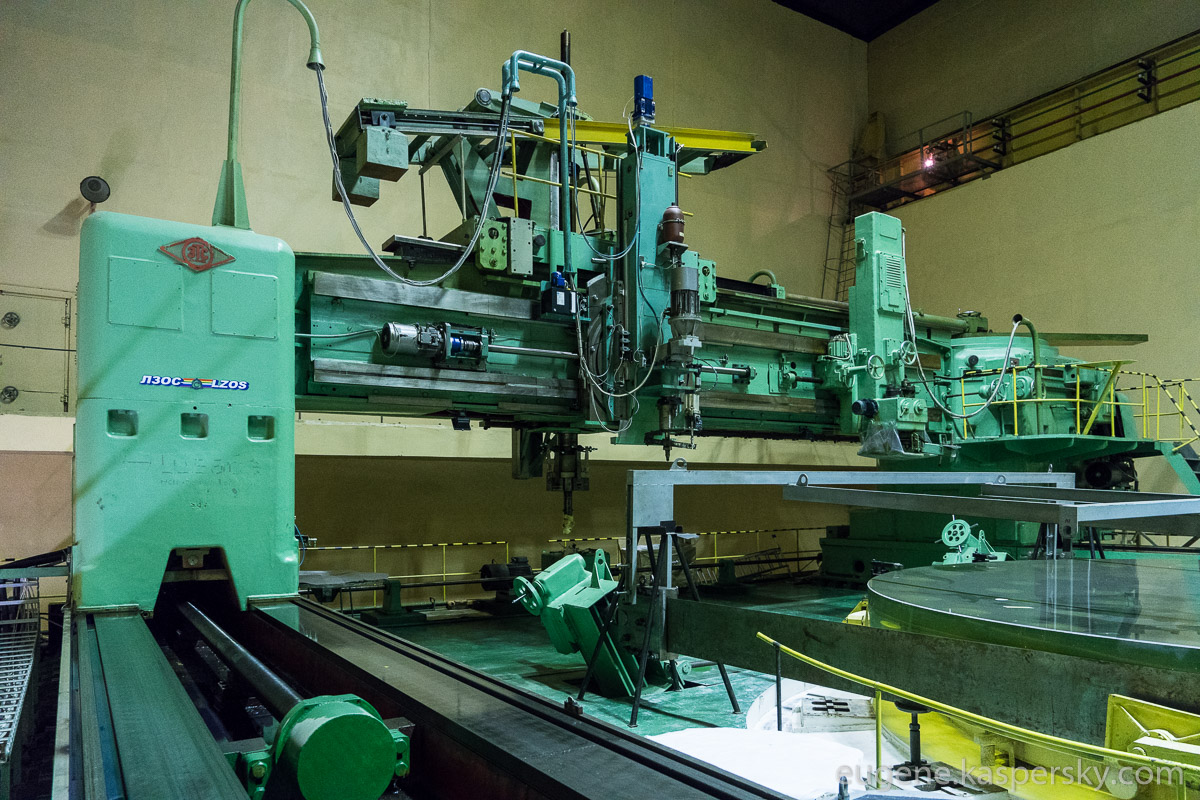 Not every piece is astronomically cosmic in size. They also do micro-pieces, polished with the use of robots: 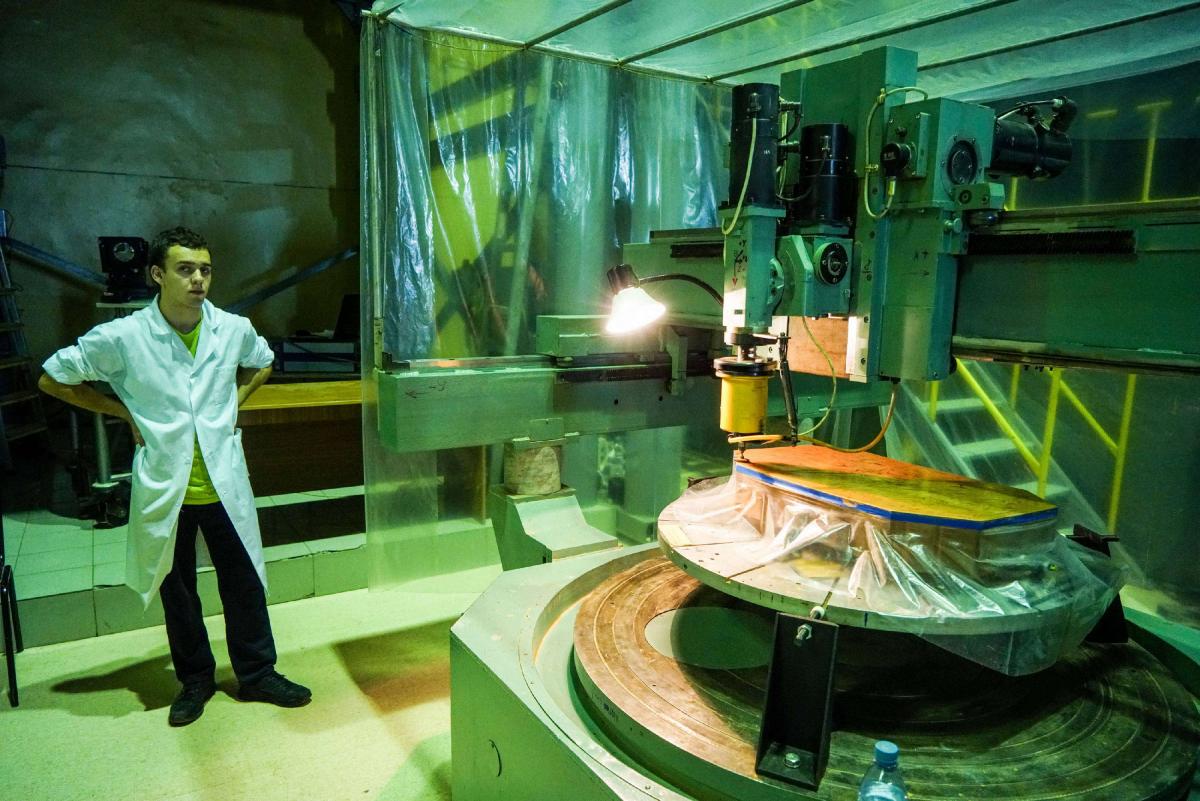 This super-modern bit of kit is an ion gun, which also polishes glass. I don’t know how it works – if anyone knows, please let me know…

Ok – guess what this is: 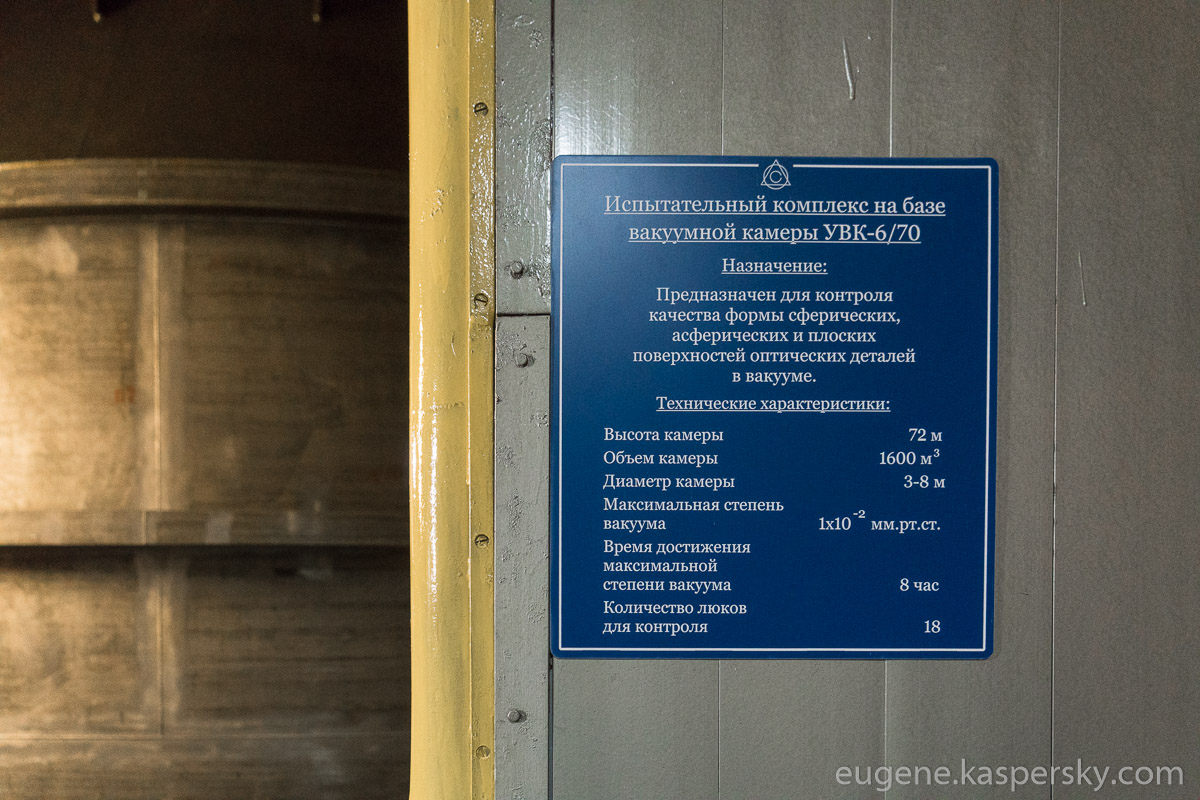 A quality-control tower. A 72-meter-high titanium tower into which they place a super-smooth mirror and then somehow pump air through it to check the smoothness of the mirror!

You can probably gather I was impressed by the facility. Very impressed. Highly recommended!