Romania’s big into palaces and castles, be they old or new, big or small, well-known or not very. I’ll start with the most famous – Count Dracula’s castle in Transylvania. It’s part of the ancient legend, of course, and I’d been wanting to visit for years. Finally, I did…

Dracula and Bran Castle – there are that many legends piled on top of one another here that it’s hard to remember – or ever know – where the ‘real’ is, where the ‘semi-real’ is, and where the blatantly made-up is. Well, it is all folklore I guess, and you can never really know how much is myth.

Some believe Count Dracula was inspired by the 15th century Wallachian prince Vlad the Impaler, who was also known as Dracula. Who knows?

Vlad Dracula lived to the ripe old age of 45 (that was a good innings for those times), and lived a life that seemed to never have a dull moment. He was held hostage by the Ottoman Empire, imprisoned by the King of Hungary, sat on the throne at Bran Castle, warred here, struggled to stay in power there, and of course had a lot of enemies impaled. Too much to go into here. Interested? > Wiki.

But Wiki gives you the… sanitized and politically correct version of events in Vlad the Impaler’s life. For the real deal in all its gory glory, you really need a guide when visiting Bran, which is just what we had.

He told us about some seriously twisted and depraved sadism; but then, with a name like ‘the Impaler’, I guess that was only to be expected. There’s the tale of his young wife thrown from a high tower to her death to prevent her being held as a sex slave by the Turks. Then there’s some violence inflicted not by the Impaler but on him – and his brother – also by the Turks. But it was the violence inflicted by the Impaler when avenging the Turks later that got him his name and fame and legendary impaling status. This guy. He just loved skewering folk. A nasty piece of work.

But back to the pics: 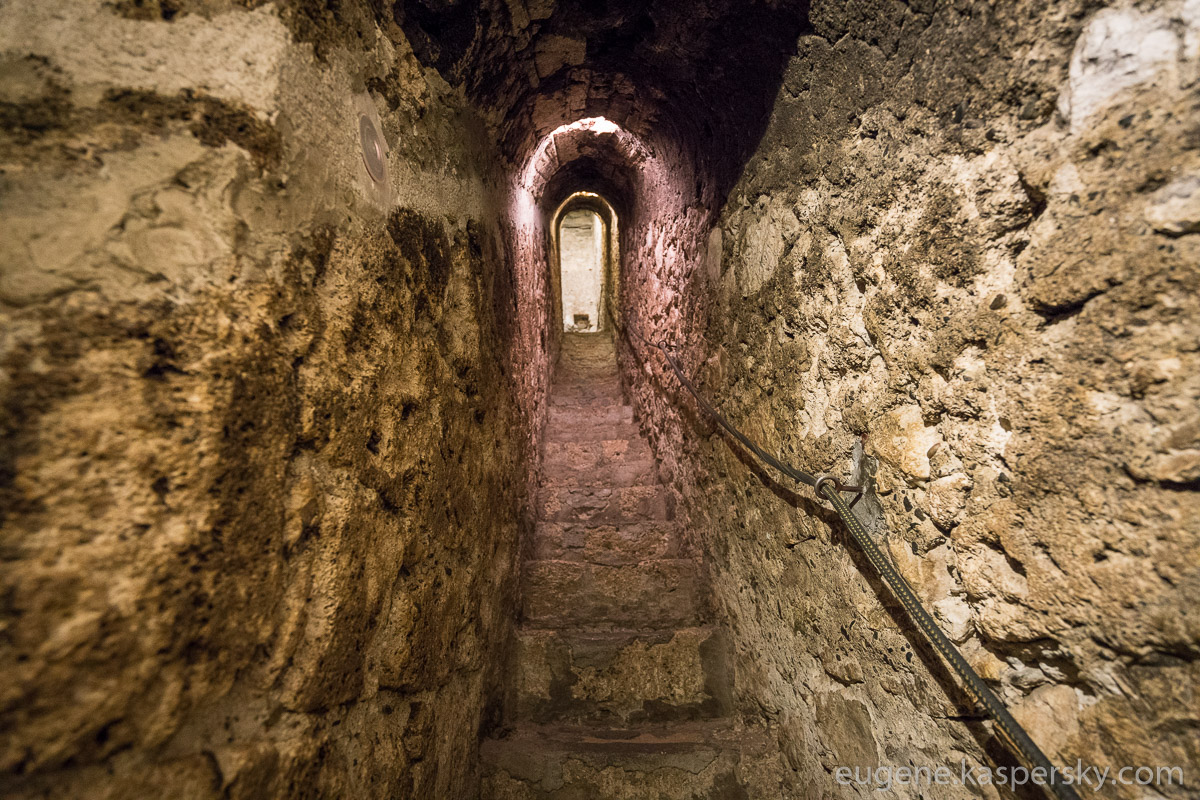 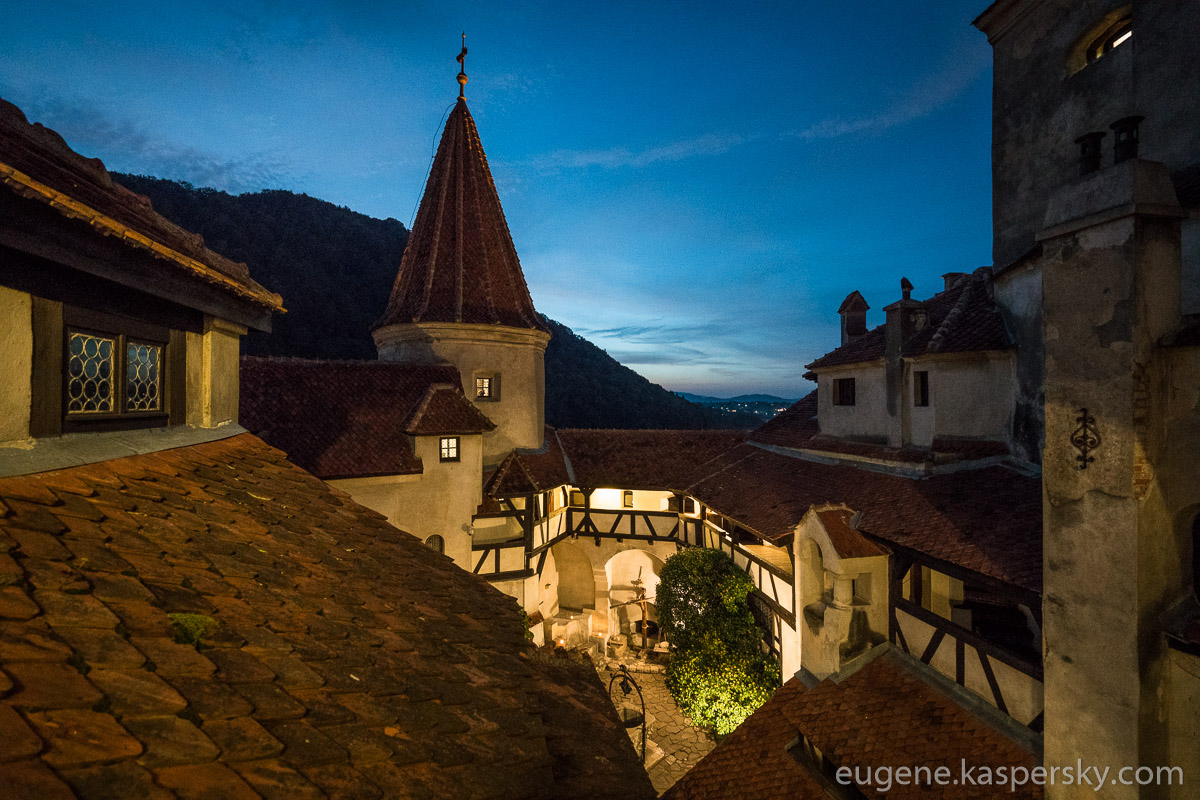 The furniture is all genuine from centuries back. It was all bought up at local antique stores. Good idea: shows how things really were way back instead of adding modern items to spoil the effect.

Indeed, they were fairly savage times. Impaling, disemboweling, putting on the rack or the ‘interrogation seat’ – all seemingly everyday occurrences; at least – if Vlad was in the area :). He took pleasure in inflicting excruciating pain for ages on his enemies; but not just his enemies – also bystanders who had anything to do with foreign troops, and also political opponents. Of my gory!

Btw, this is our wonderful guide:

The door to the right you can see in the above pics used to be a secret one, which led to an equally secret passage. Way back when, the fireplace that’s now to the left was to the right of the door – hidden in the chimney!

Our guide didn’t simply recount interesting tales about the history of the place, he fairly napalmed us with his quick-fire, witty narrative! Mad tales, curious legend, absurd folklore, hilarious jokes, intriguing theories… Sometimes we reckoned he was improvising. Other times he engaged in deep discussion with us as to the likelihood of this or that actually happening. I have to say, this was the most enthusiastic and interesting tour guide I have ever known!

Here’s an example of what I mean: here’s a joke about Dracula he told us; at least – as well as I remember it:

One day, the three most famous ‘vampires’ all met up: Frankenstein, Dracula and Harry Potter… Ok, maybe not Harry Potter; let it be… Mickey Mouse – in fact, anyone you like. So, Frankenstein, Dracula and Mickey Mouse all meet up, and they’re arguing about which one of them is the coolest, baddest vampire. So they all decide to undergo a test to decide the matter. First up is Frankenstein. He runs out of Dracula’s castle, only to return 10 minutes later with blood dripping from his mouth
“How come you were so quick?” the other two ask.
“Well, you’ve noticed the main square in town, right? To the right of it, there’s this small house. So I just went in there and quickly ‘cleaned up'”.

Next up was Mickey Mouse. He too ran out of the castle, returning a mere five minutes later with even more blood dripping from his mouth than Frankenstein.
“So, what about you? How so darn quick?”
“Well, you’ve noticed the small house to the left of the road going into town…?”

Last but not least, Dracula was next. But since he had wings, he flew out of the castle – at great speed. He returned just a minute later, with blood not only dripping from his mouth bit covering his whole white face too.
“How come you were so fast?” the others asked, astonished.
“Well, did you notice there’s a tall bell-tower in the center of town? I didn’t!”

… and that was just one of many such on-theme anecdotes :).

What made our excursion of the castle even better was the fact that we were treated to an evening tour – after all the other tourists had left. So: no folks around, plus the suitably slightly spooky feel due to it getting dark. Perfect!

Our next stop was Peleș Castle. A magnificent architectural object! Ok, it may not be worth making a special trip to Romania for, but if you are ever already here in Transylvania – check it out! Here she is:

A unique mansion. Construction began at the end of the 19th century and was completed in the early 20th, that is, still during the Industrial Revolution. Therefore, it combines classical regal chic and cutting-edge technology. The result is a particularly refined Alpine-esque castle that really is quite special.

About that ‘cutting-edge technology’…

Turns out this was the first royal castle in the world to be fitted at the outset with electricity throughout. The reasons for this could be put down circumstance: most European castles had already been built waaay before this one (obviously they all had electrical lighting and sockets fitted later). And other castles, well – they just weren’t being built at the time this one went up: there weren’t that many monarchies kicking about like in earlier times, and regarding the ones that were – they’d long since gone all ‘modest European’. Palaces simply weren’t in fashion.

So, like I say, Peleș is unique in that it was the only one built in several decades (centuries?) – so it was hi-tech (it even has its own mini-power-plant!) as well as high-born :).

Inside – oh my! More regal than a Royale with Cheese. 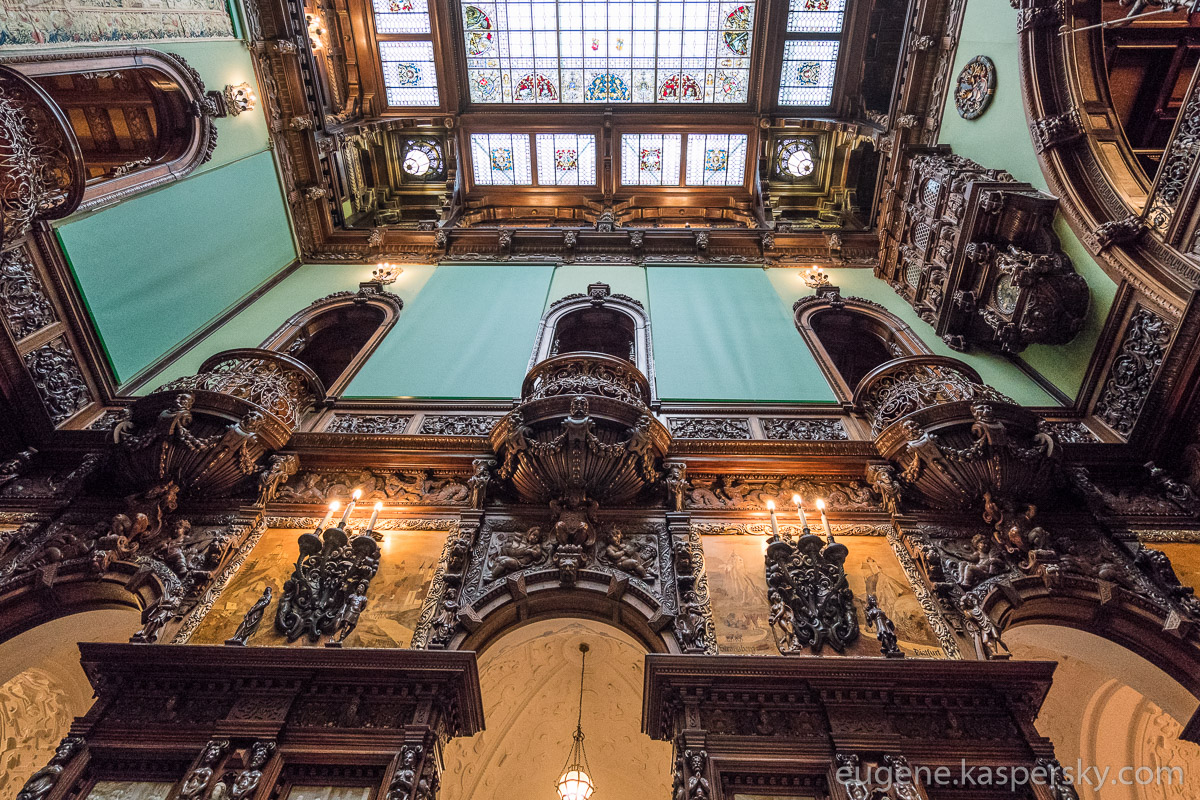 The statues are made of wood! A rarity, I have to say…

The armory. Oh my gun! A collection of devices to kill folks and sometimes animals with. Or to protect ones realm with, I guess. Still, not quite my cup of tea. Don’t quite get the aesthetic of such installations.

Jeez, it must have been tough wearing that lot all day. How on earth did he move about, never mind swing a sword?

And how on earth could the poor guy walk in THOSE?!

I wonder what knights wore under the armor? Special thermals and socks? Anyone know? 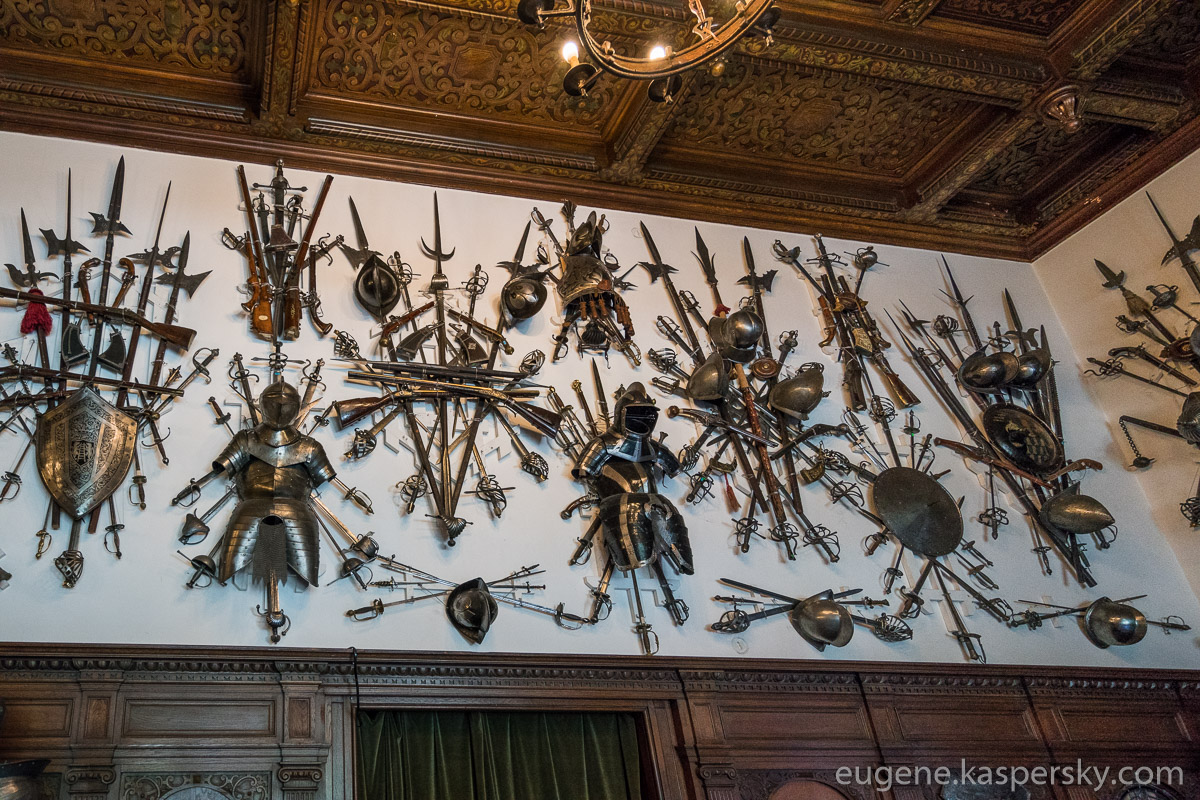 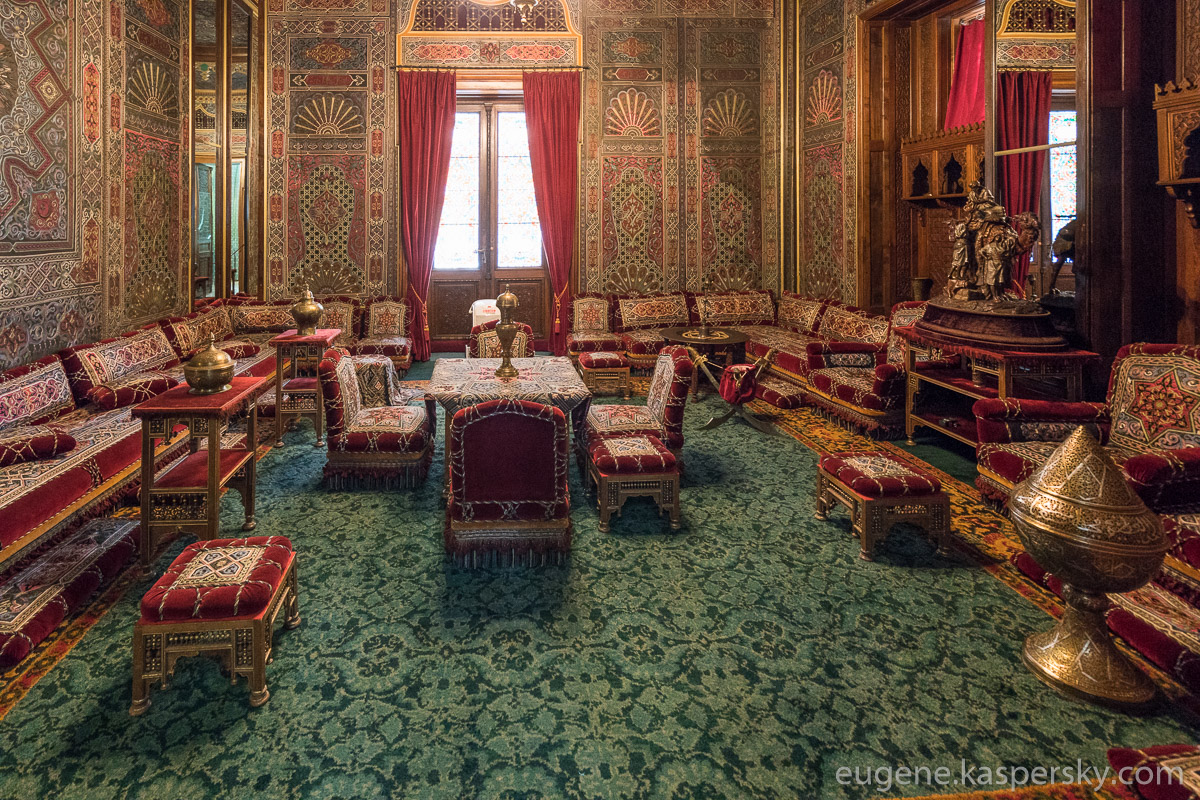 Waiting room? Or a party room? 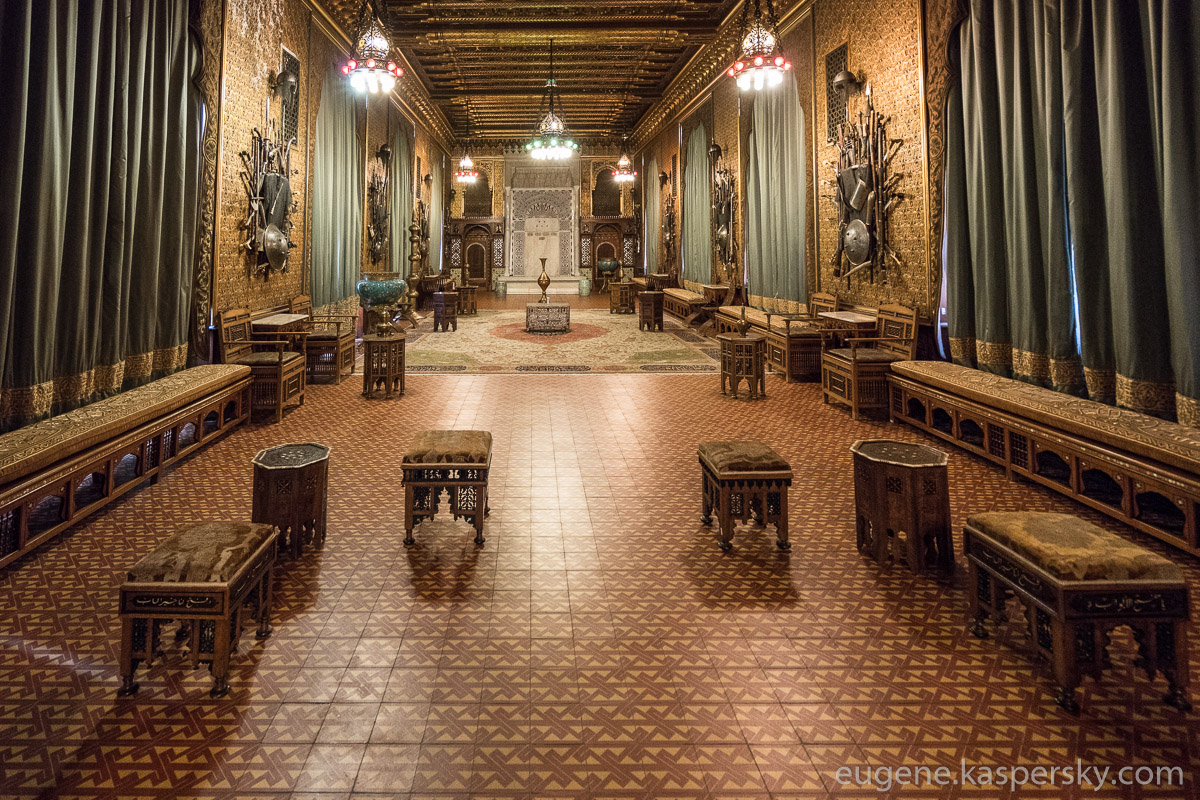 In all, a very interesting place. If ever you’re in Romania – get here! 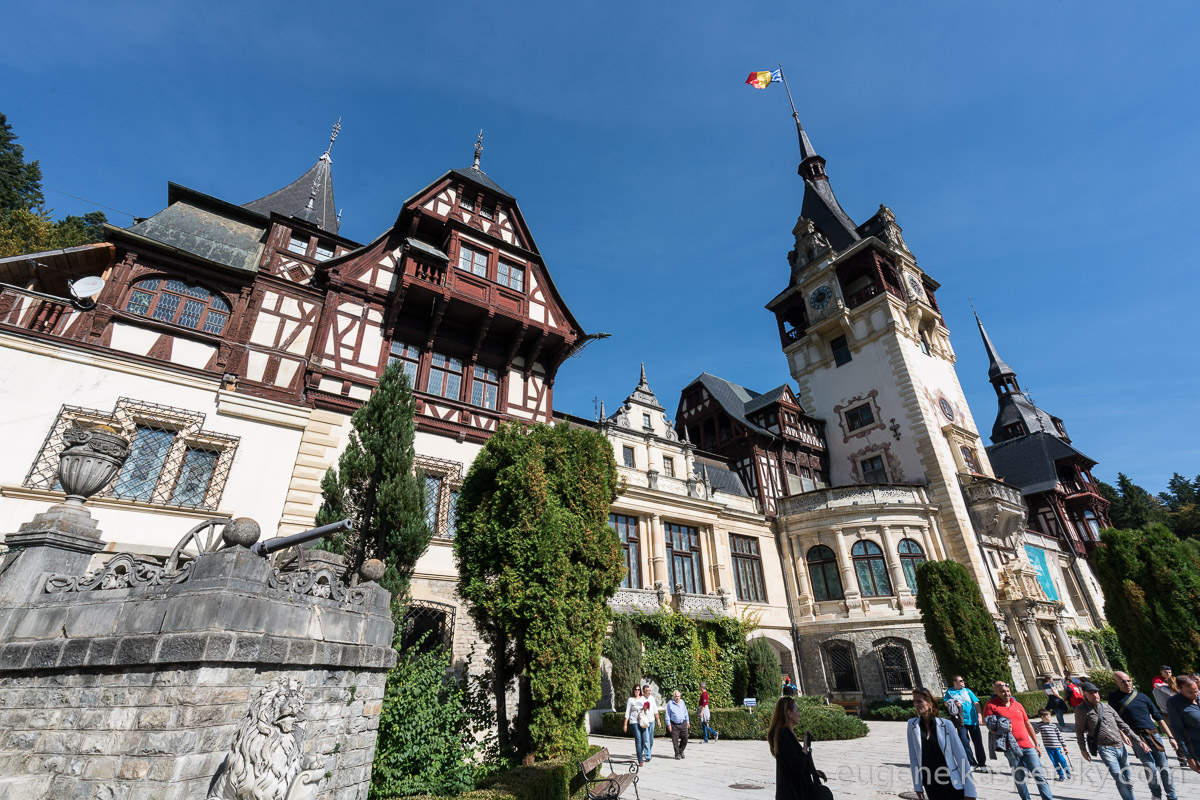 But that’s enough palaces and castles for one day. Time to check out the Romanian countryside!

The place is called Amfiteatrul Transilvania. But don’t try look for it on the net – it doesn’t have a site. This is the nearest I got to finding one: 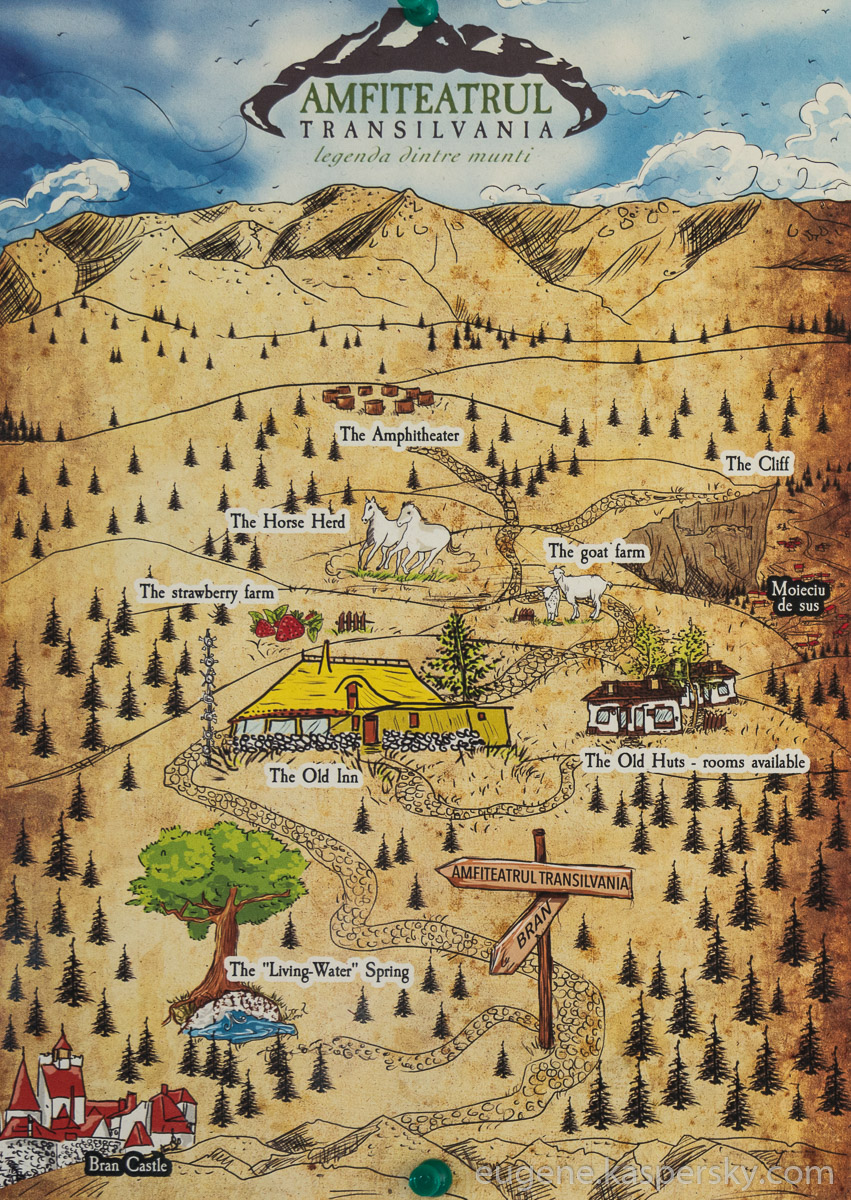 We were blessed with good weather, but they say that even in winter it’s no less stunning and relaxing. 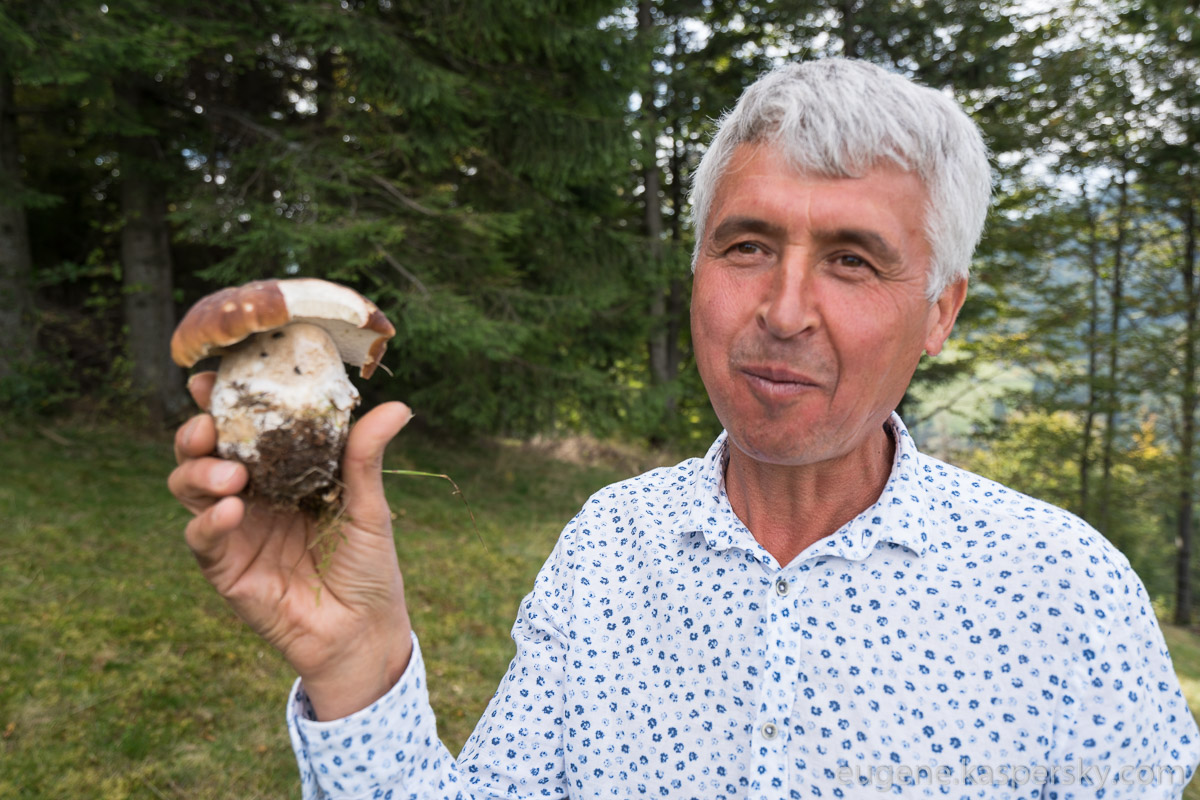 This was the first time I’d eaten an uncooked mushroom – not fried, not marinated, not boiled. RAW! Pick one and in the mouth it goes. Fancy – a Russian never trying?! It took a Romanian to show me it’s doable. Turned out to be very tasty too! But don’t try this out for yourself without an expert (what if you pick a poisonous toadstool?).

I’m not normally one to snap the food I eat, let alone post it online. But I had to make an exception here. Oh my gorgeous! Soooo fresh and tasty. All washed down with Pálinka too. Perfect!

Here’s the dungeon cellar. All sorts down here. In the big fat glass bottles – birch juice (!!); seven-year-old birch juice at that! Turns out it’s alcoholic ‘juice’ too :).

Rounding off the palatial-castle theme, next up was the Palace of the Parliament in Bucharest. Aka the People’s House. It’s also the palace that Ceaușescu built.

Apparently the second largest administrative building in the world after the Pentagon. Also one of the largest civil buildings in the world – 270 by 240 meters and 86 meters high.

Monumentally grandiose. Its stats are astonishing – check out the Wiki page. It seems the whole country helped build it – including 700 architects and 20,000 workers round-the-clock. Only Romanian materials were used – apart from a few doors: gifts from the president of Zaire. It left Romania completely bereft of marble: all of it was used up on the palace.

Inside the open spaces are crazy colossal. Very… Communistic too.

Just look at the size of that rug! It wouldn’t even fit in my viewfinder! I wonder how they dry clean it? Ah – the dry cleaners come to it, not the other way round :).

This roof opens up. Ceaușescu had plans to arrive in it by helicopter: 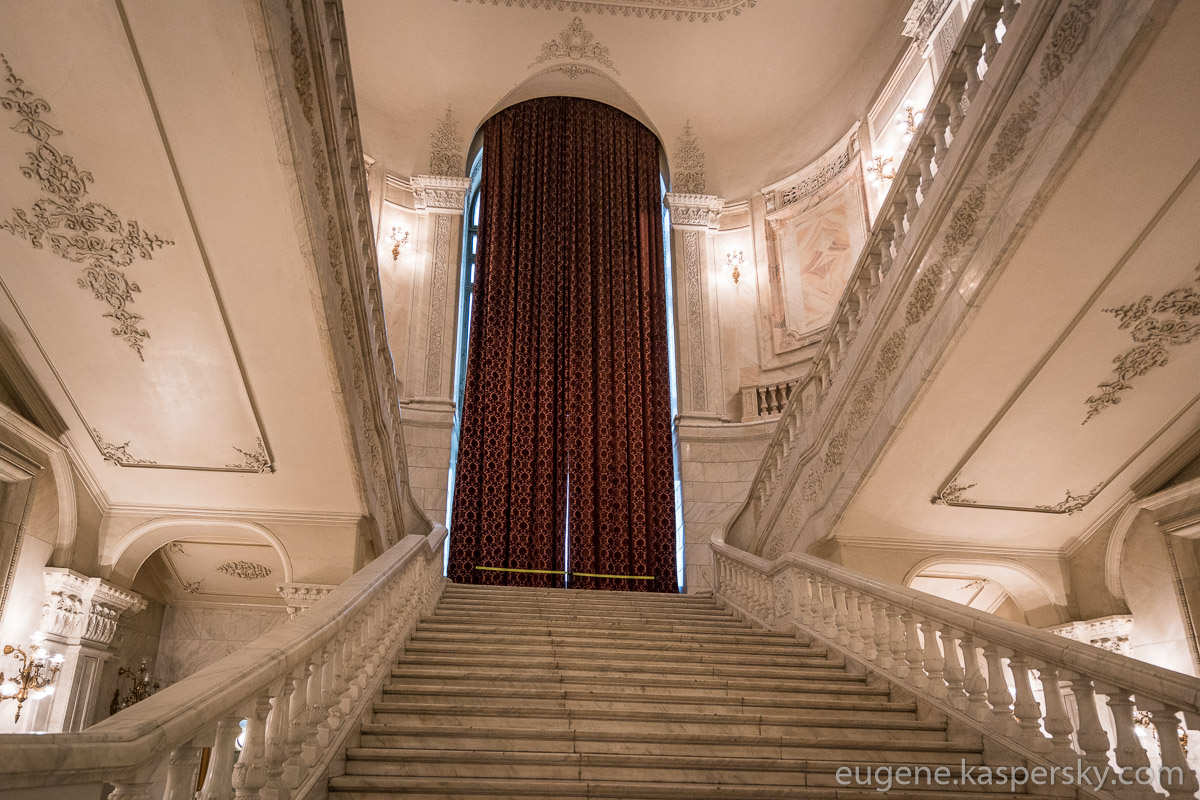 The place is so massive that we only got so see in our hour-long tour 7% of it, as our guide informed us at the end! 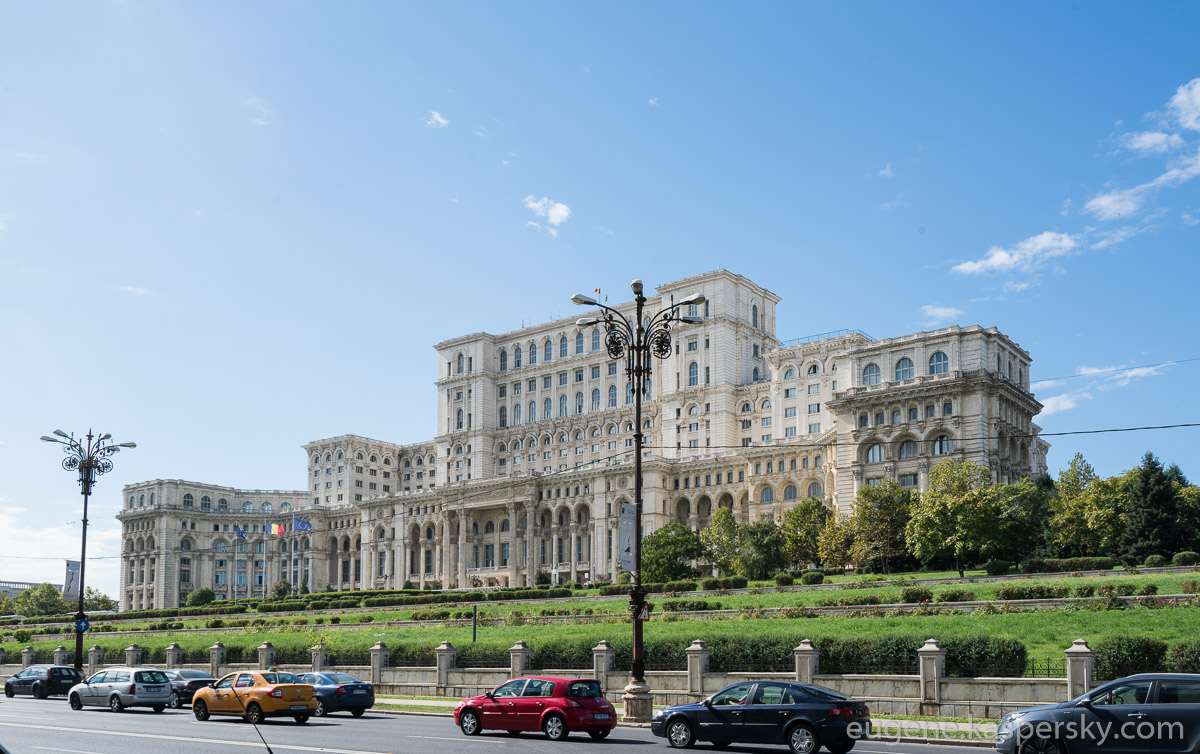 All the pics from Romania are here.

PS – I never got to find out what this is in central Bucharest. Anyone know? 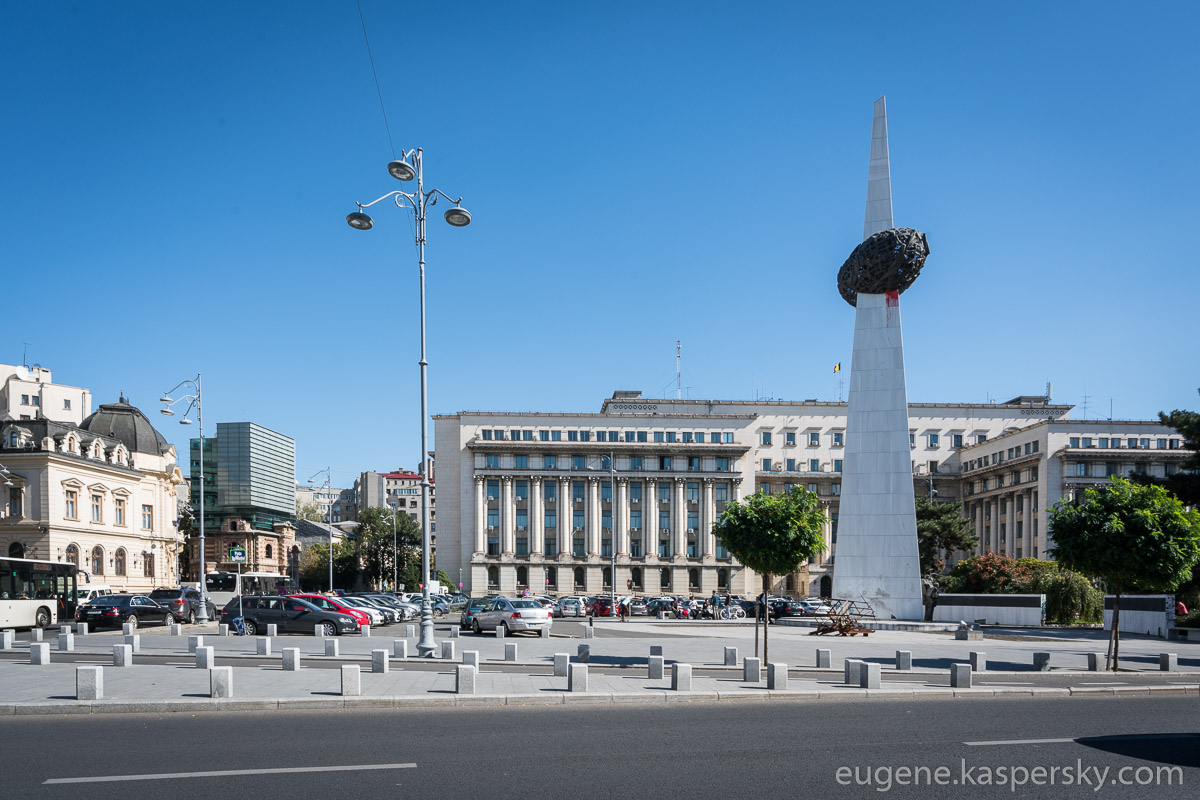